Lluis Cortes is the 34-year-old Head Coach of FC Barcelona Femini, and has been in this position since 2019, although worked with the side for two years previous as the assistant coach.

Cortes has Barcelona playing as you would expect a Barcelona side to play, with their philosophy straight out of the Johan Cruyff handbook. Barcelona are a possession-heavy side, and so much of Cortes’ tactics analysed in this article will be based around Cortes’ attacking principles and how they have been instilled in this Barcelona side.

Spain has a growing reputation in the women’s game for the excellent football being played and talented individuals coming out of the Primera Division Femenina, and Cortes’ Barcelona are without a doubt the jewel in the crown. This tactical analysis gives an analysis of the tactics used by the Spanish coach at Barcelona.

Cortes favours either a 4-1-4-1 or a 4-3-3, but frankly a hybrid of either is seen throughout most games with the wingers in the 4-1-4-1 pushing forward and into the half-spaces to join the lone forward. Either way, he looks to have one pivot at all times, ready to connect the defence and midfield during Barcelona’s prolonged build-up phases.

As Barca play out from the back, Cortes uses two of his midfielders to rotate in this space and continuously force the opponent to have to adapt to players rotating into the pivot space. 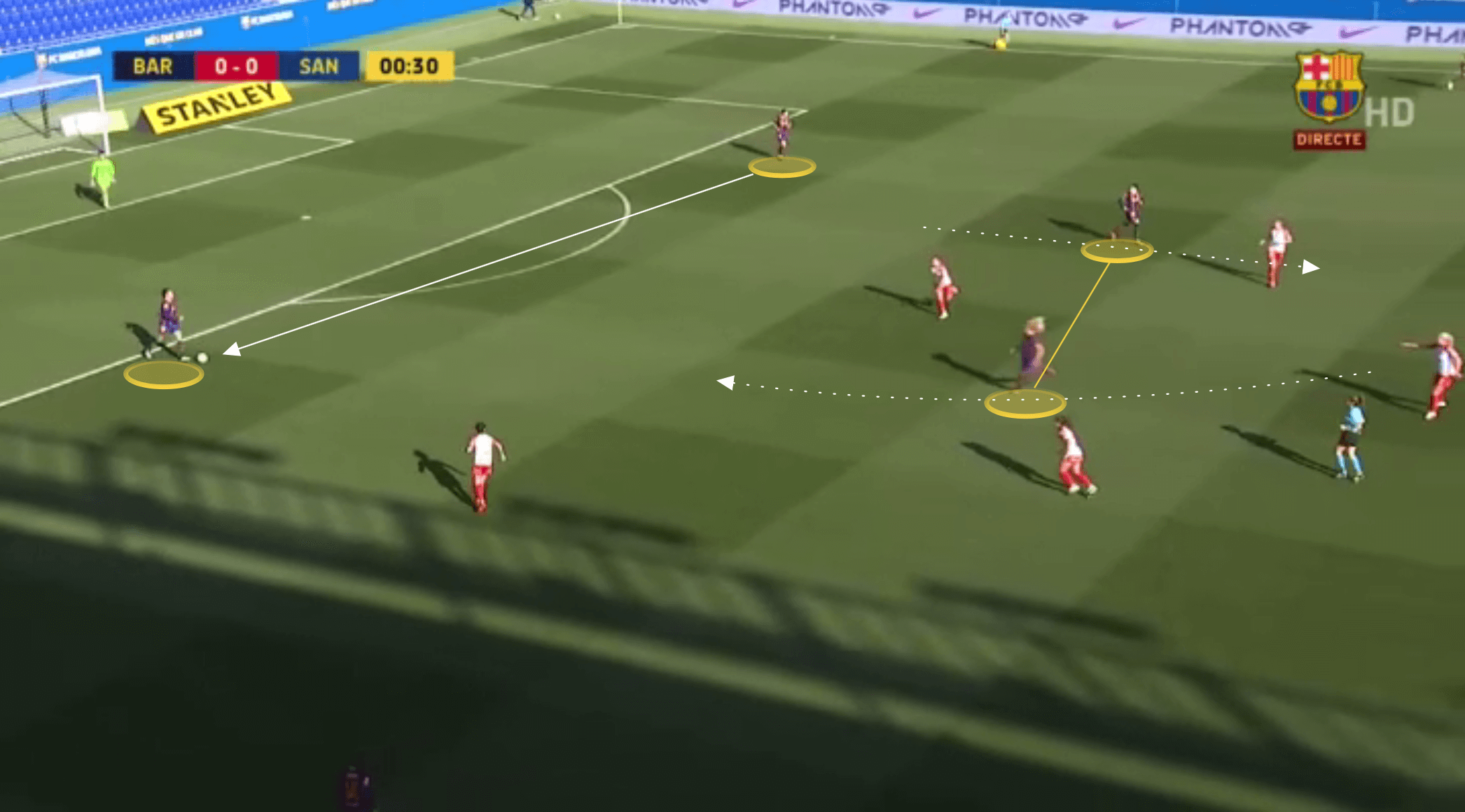 He uses continuous rotation in the possession phase between players to constantly move the opposition’s defensive shape around and patiently wait for them to make a mistake, and play forward into the space. We will see more of this in the next section.

Cortes places high demands on his full-backs to facilitate his style of play. Firstly, as they look to play out facing a high press, the full-backs will drop deep and wide and help stretch the opposition. In doing so, Cortes wants them to give an easy option to beat the press, but also to provide space centrally for the pivot to receive.

If there’s little to no press, Cortes has his two centre-backs anchor the build-up, whilst the full-backs push up essentially giving a three spreading across the width of the pitch with the pivot in the middle. Ahead of them he has an attacking five, stretching the opposition’s back line horizontally. 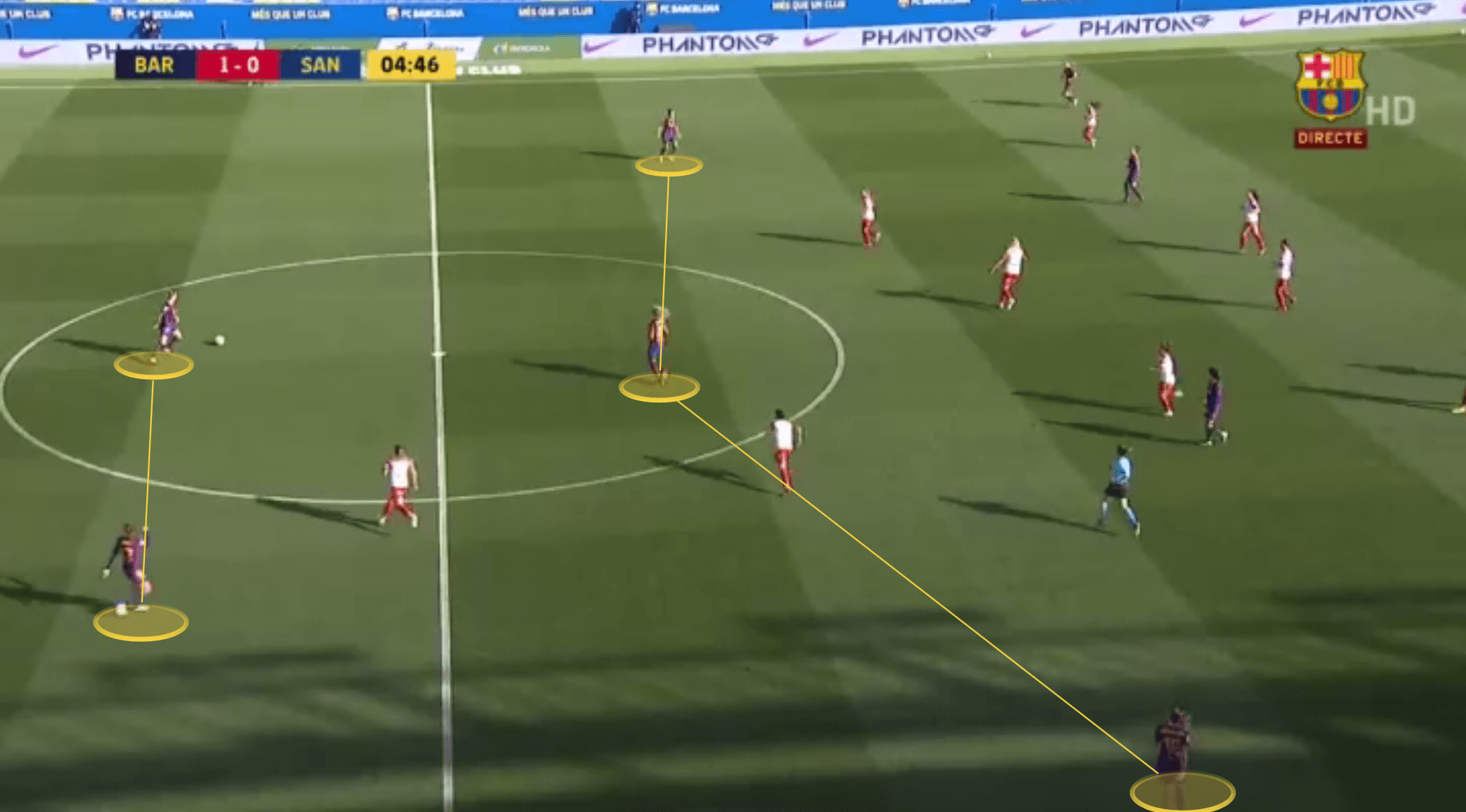 The high positioning of the attacking five leaves plenty of space centrally, and when the pivot drops deeper, in between the centre-backs, Cortes encourages his players to make runs in and out of the central channel to remove the opposition players out of this space. We can see this in the image below as space is left centrally as the 10 shifts towards the left flank, taking their marker with them. 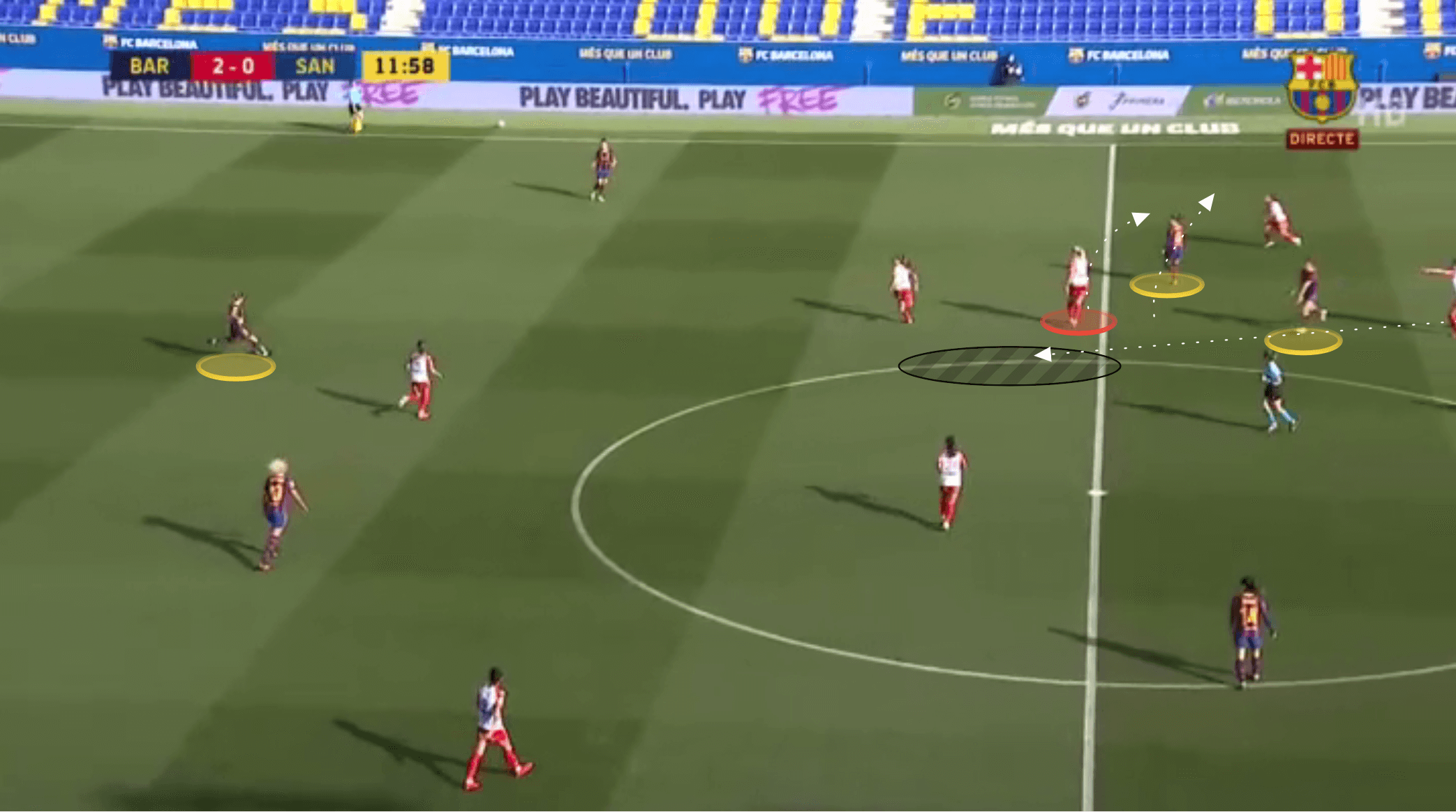 Another way Cortes looks to encourage the opposition in being pulled out of their defensive shape is with the use of quick, one touch passing sequences, with the passes played over small distances. Barcelona engage two players in the example shown below, with the third player rotating into a deeper area to receive the lateral pass once the two opposition players have been drawn in. 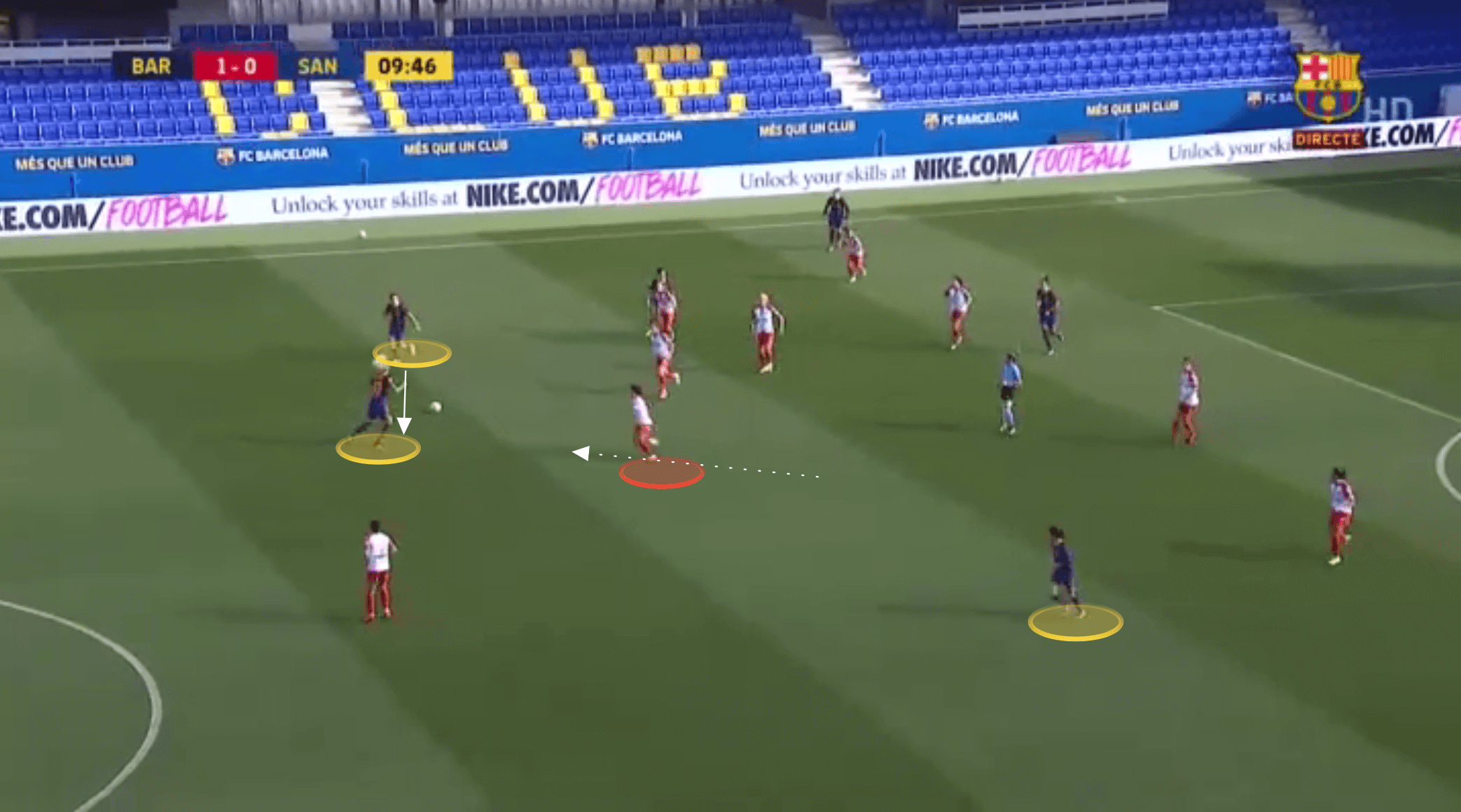 Barca’s midfielders simply play a one-two and move the ball out of the area to the free player. 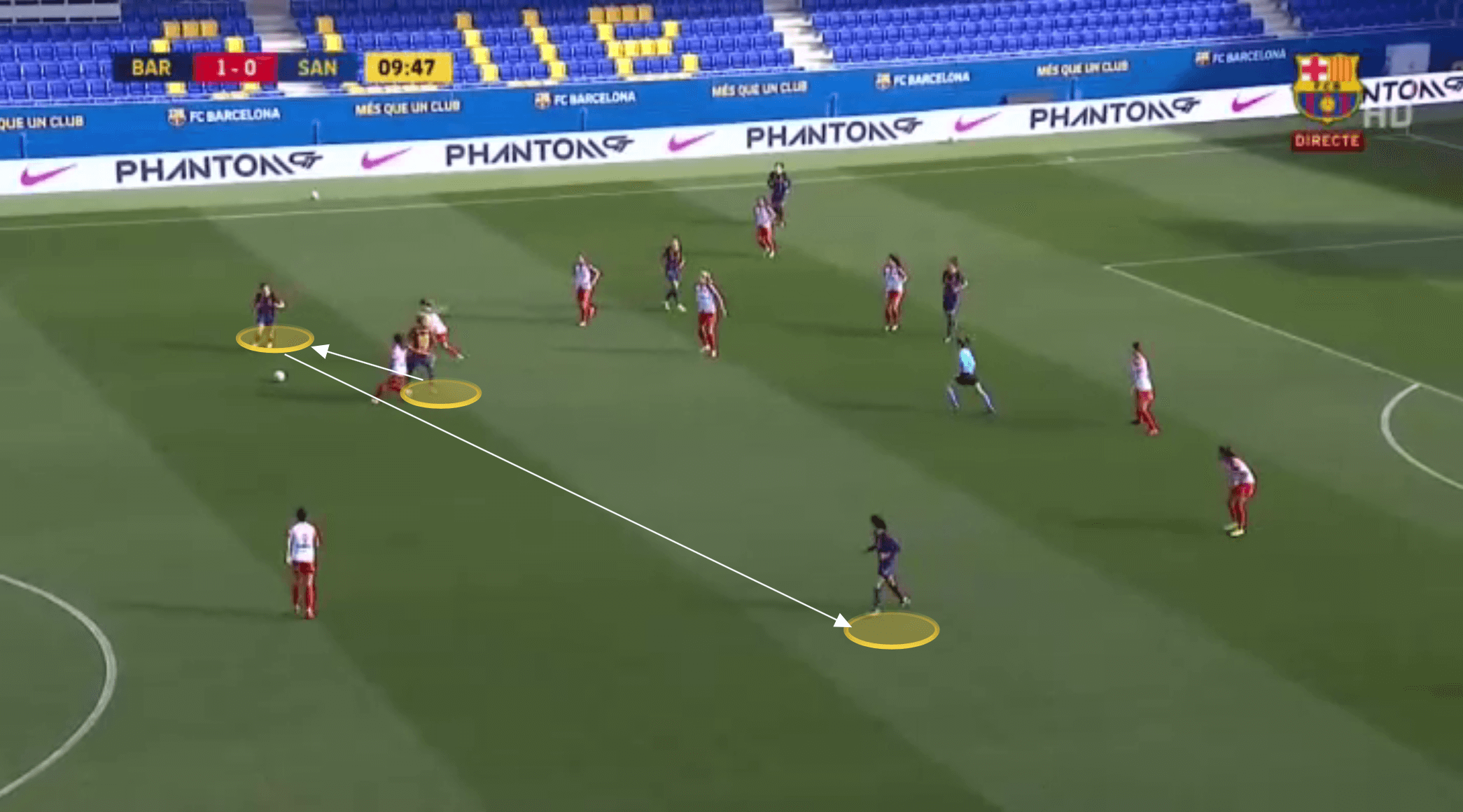 These short passing sequences give Barcelona a structure to allow them to counter-press effectively too. As much as these quick one touch passes over short distances make it difficult for them to be dispossessed, if they do lose possession, the players in proximity to the ball are able to immediately press.

Below we can see an example of this as two players are in support of the ball-carrier who has just lost possession. 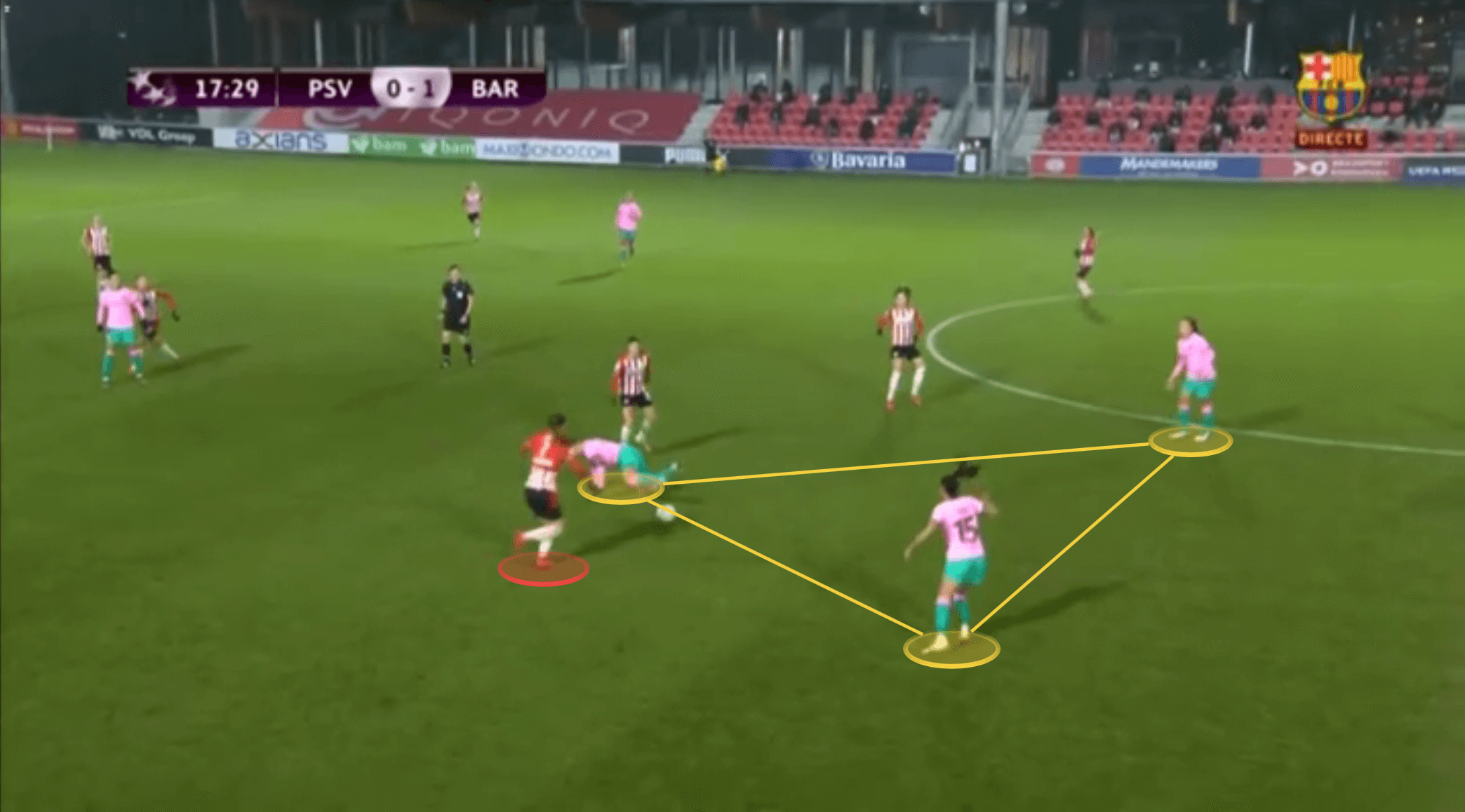 Even as PSV are able to move the ball forward, Barcelona are able to swarm the ball. With all of these players surrounding the ball too, when they have counter-pressed effectively, there are immediately short-passing options available for Barcelona to secure possession before working the ball out of the crowded space. 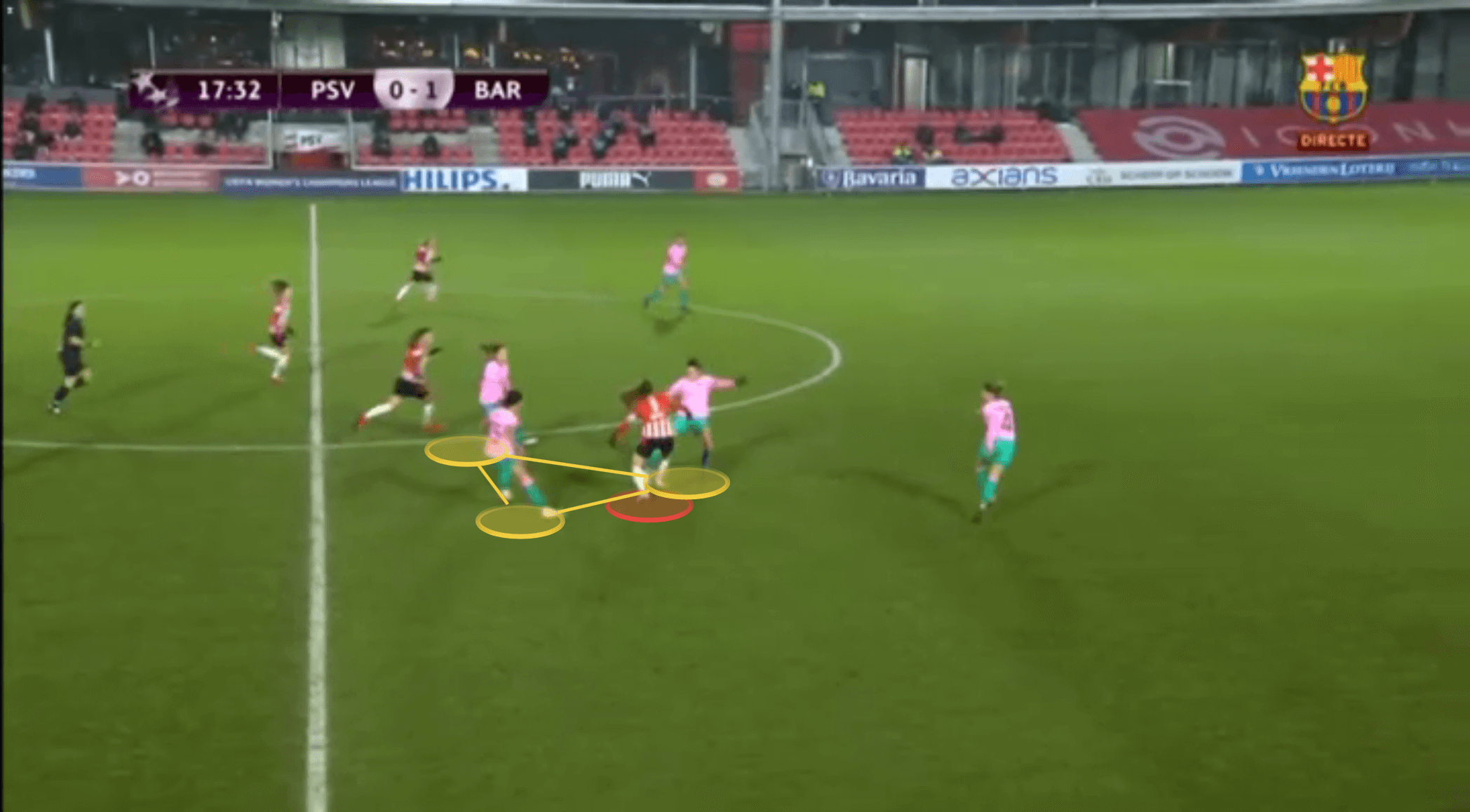 Using the flanks to advance possession

It’s been touched upon when discussing Cortes’ preference for Barcelona’s possession tactics, but as we’d expect with a Barcelona side, Cortes’ side are prolific with their use of rotations to advance the ball and seek to create numerical superiorities in areas of the pitch to allow them to get behind opposition back lines.

One of the main areas Cortes targets is on the flanks, specifically looking to draw the full-back out of position, isolating them, and advancing the ball past them. Below we can see an example of this as the opposition full-back is drawn towards the receiver. At the same time, the high positioning of the Barca left-back instantly creates an opportunity to overload the full-back, and the movement by the Barca player in the 10 space to support the receiver. 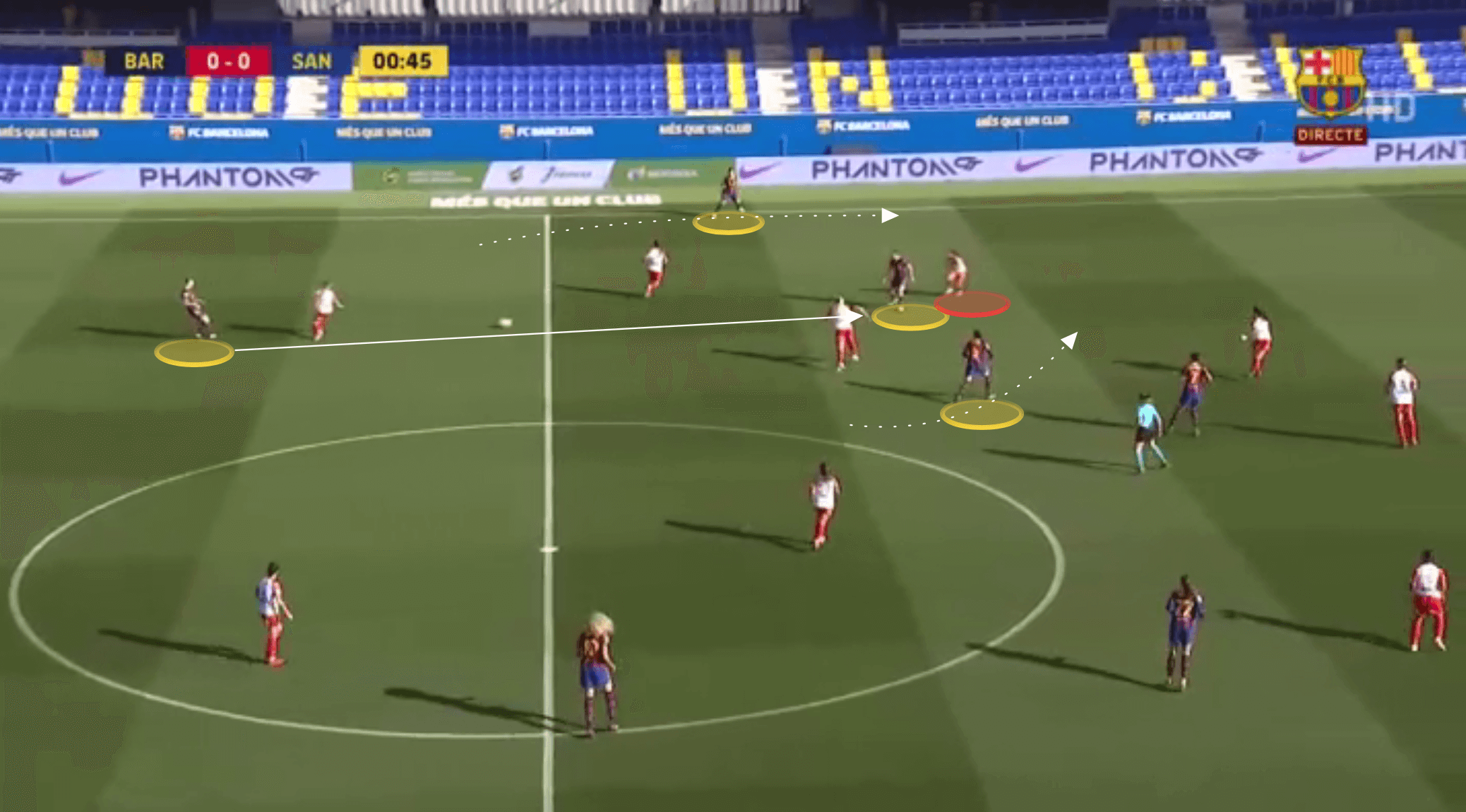 We see a more basic version of this in the same game, albeit this time on the right flank. Again Barca look to engage the full-back and the high positioning of their own full-back creates the simple overload. 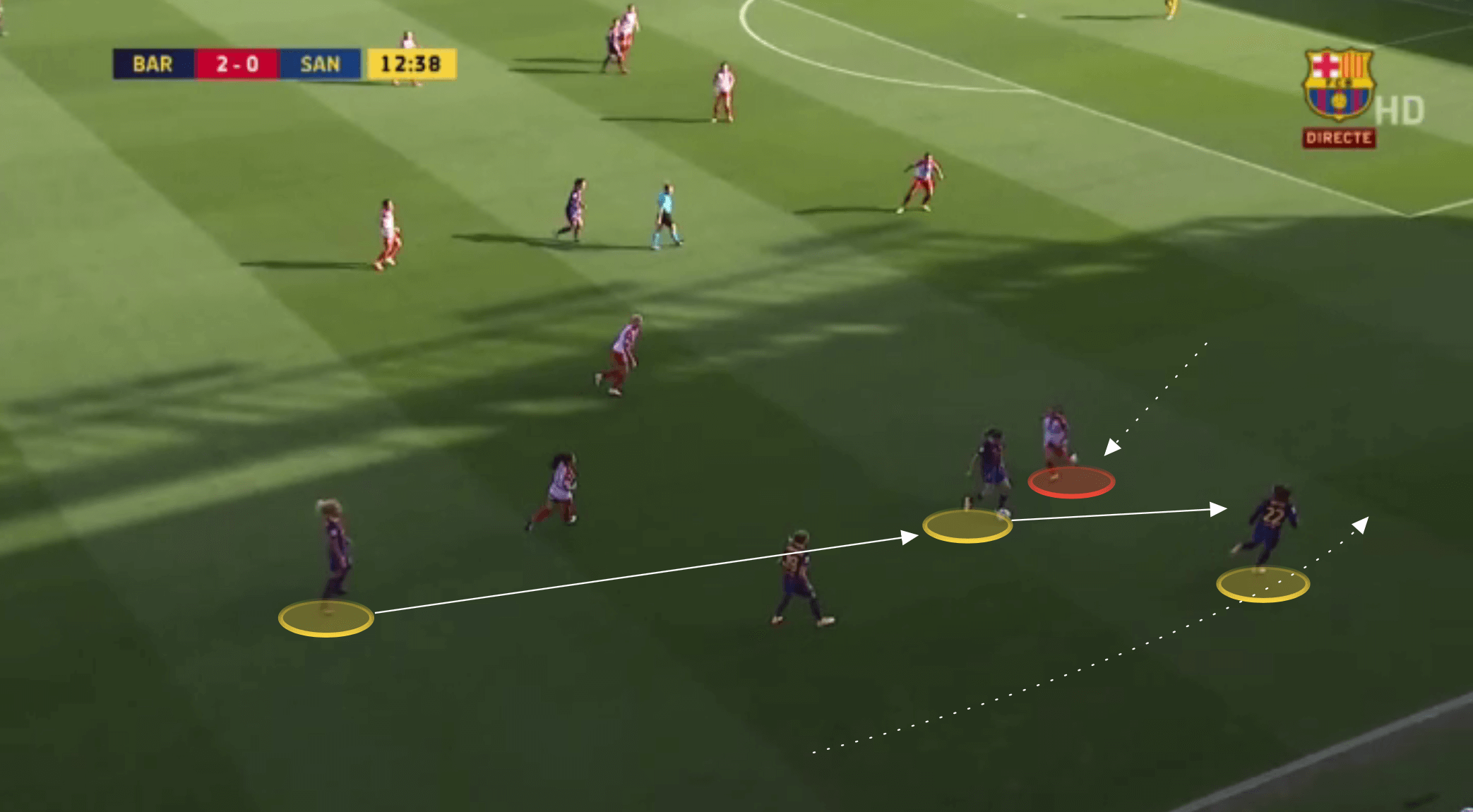 Cortes still looks to do this in even more advanced areas, and the high positioning of the full-backs is something that is seen throughout Barca’s in possession play, and the deep positioning of their pivot allows both full-backs to do this at the same time, and provide constant width whilst the rest of their attackers have the opportunity to crowd the central channel.

This is obvious in the image below as the full-back has possession on the right flank. Again, Barca look to isolate the opposition full-back and an overlap is made by the supporting run as the full-back engages the defender, allowing Barca to easily manoeuvre this player. 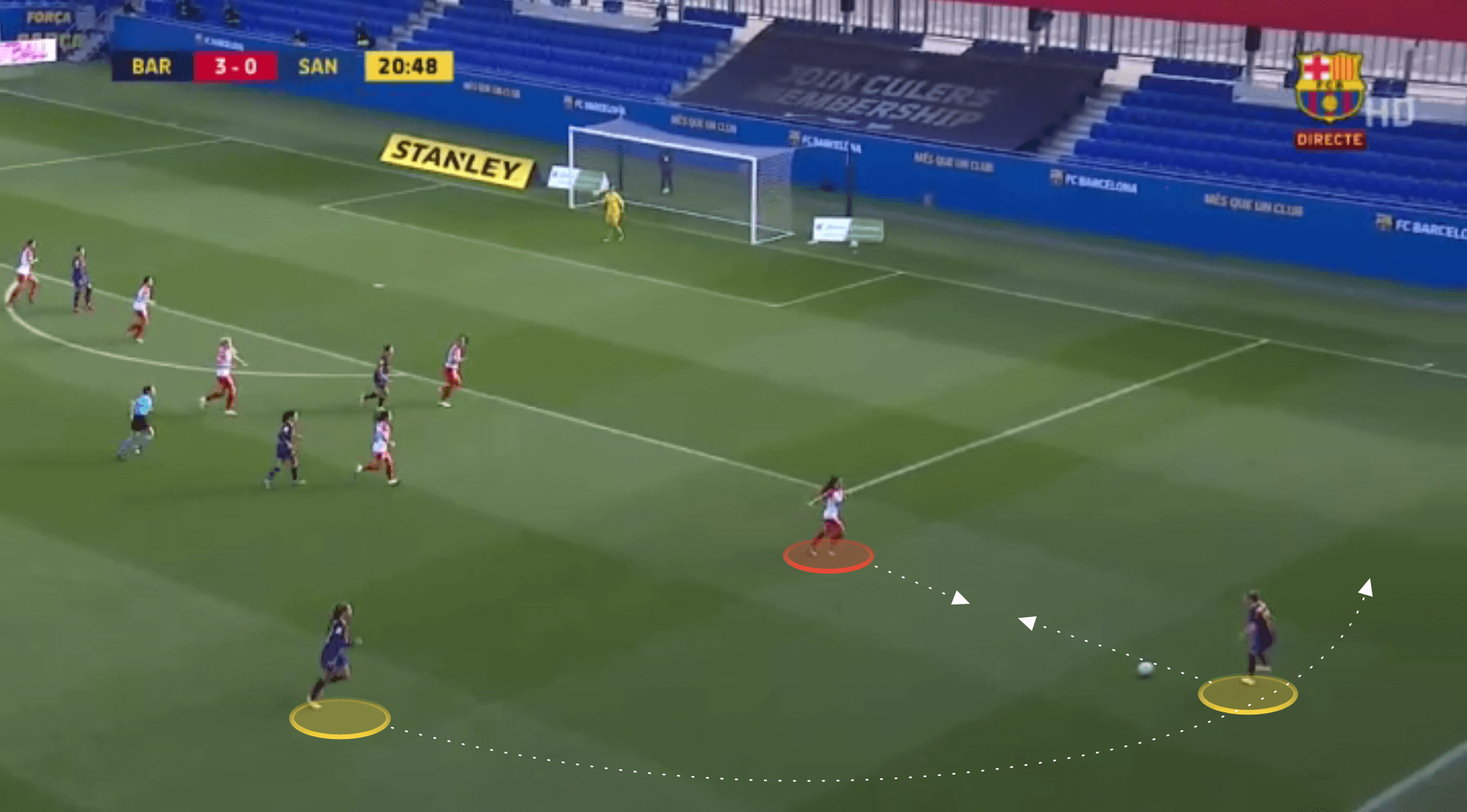 With the constant width in attack, Cortes looks to create even more space for these players to receive the ball and whip the ball across goal. The run in behind that we can see in the image below is a viable option for the through pass, but what it does too, is draw the full-back inside and narrow the opposition at the time of the pass. 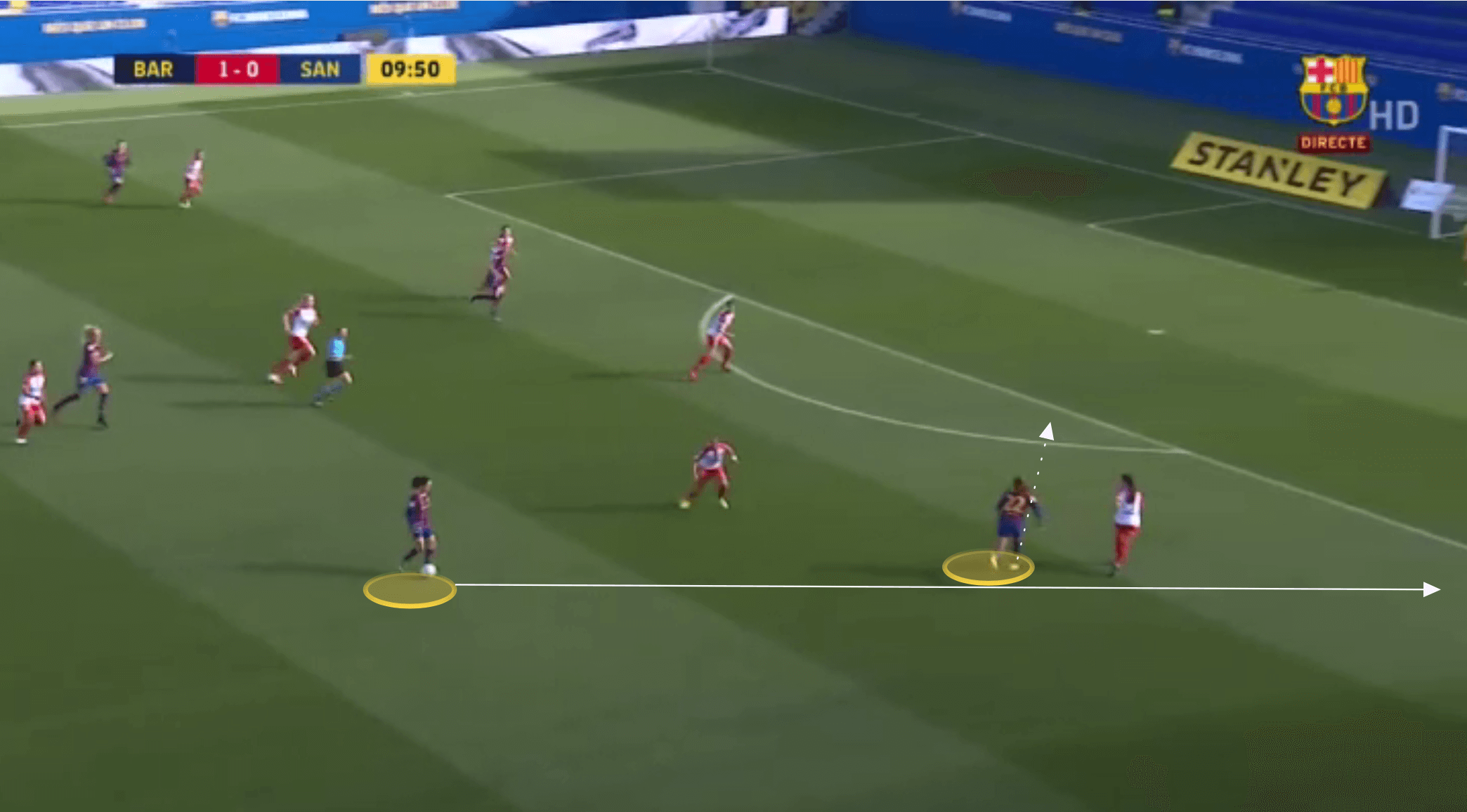 At the same time, the width provided by the full-backs gives an option for through passes if the opposition maintain a particularly compact defensive shape in the central channel. Below we can see Barca using the lofted through pass over the top for the full-back to latch onto after cutting inside and behind the back line. 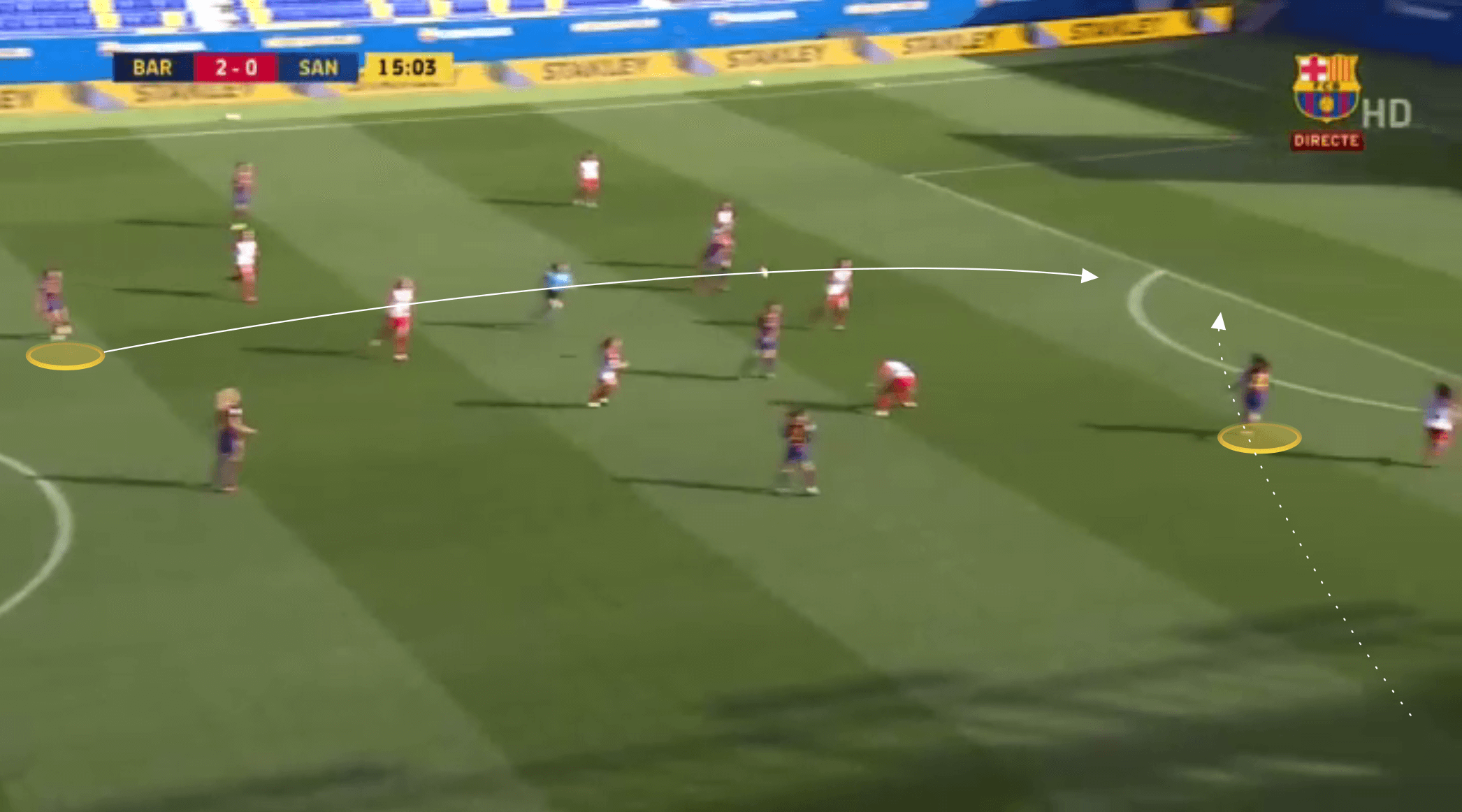 The full-backs are key ball progressors for Cortes too. With the opponent looking to block central passage, there is often space left on the flanks for Barca. Cortes is more than happy for Barca to engage in quick central passes to narrow the opposition in even further before shifting the ball out to the flank and having the full-back drive forward, again looking to engage the full-back. Cortes demands his central-midfielders push forward and leave their markers behind them, to allow Barca to exploit the potential overload.

In the image below, the full-back has the option to slide the ball behind the opposition left-back for the on-rushing central-midfielder, or after engaging the defender, slide the ball inside where the midfielder and forward can create a 2v1 against the Atletico Madrid centre-back. 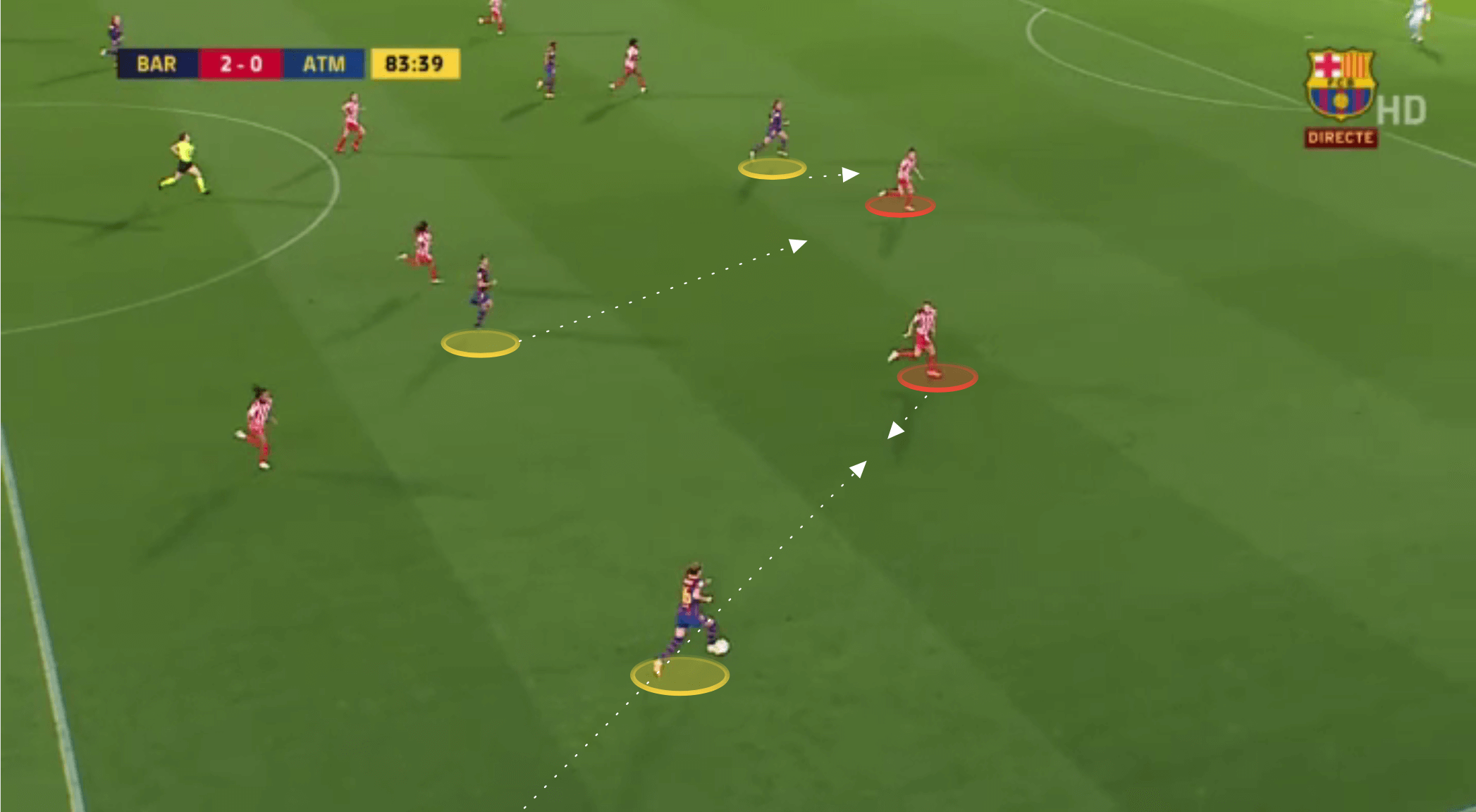 Cortes employs an effective, aggressive pressing system that looks to either allow Barca to win possession in the attacking third by forcing the opponent into making poor passes, or by encouraging the opposition to escape the press with hopeful long passes forward, and as a result allow Barcelona to resume their possession phase. Either of these options is a win for Cortes.

Cortes uses a mixture of man-oriented and zone-oriented pressing with two forwards required to sit close to the opposition centre-backs, whilst two wide players mark zonally, close enough to the full-backs to prevent them receiving, but also narrow enough to discourage the keeper from attempting a lofted pass into the midfield. Cortes is happy to leave one midfielder open, with the pivot (out of picture) tasked at immediately pressing should they receive possession. However, as we can see from the image below, this would be an extremely risky decision from the keeper, and teams either look to play long, which as we’ve mentioned suits Cortes just fine, or attempt their luck in navigating past this system. 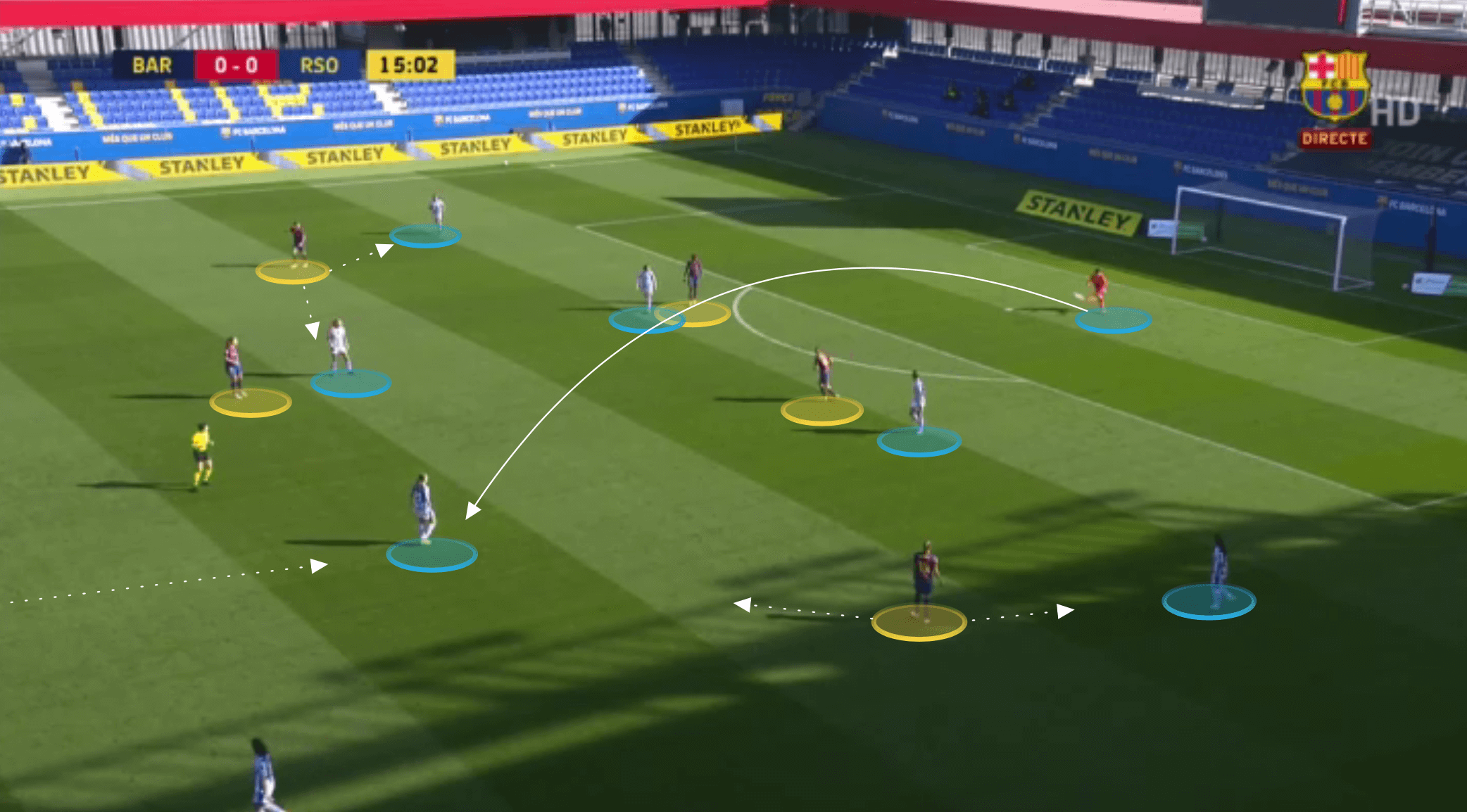 This is directly from opposition goal-kicks, and the aggression of this pressing system is designed to remove any other logical option for the keeper but to play long. In open play, they tone it down slightly and Cortes wants his side to press to prevent easy passes for the opponent rather than to win the ball through tackles. If there is any on-ball pressure it is more to force the opposition to rush a pass rather than taking their time and being able to think through their options effectively.

Cortes’ Barcelona don’t have one set way of pressing and are reactive to their opponent’s strengths. For example against PSV, Cortes was happy giving up possession to the centre-backs, but entrusted his centre-forwards with the job of keeping the pivot in their cover shadow when PSV were playing out from the back. We can see this in the next two images, as the forward allows her wide player to press the ball-carrier. 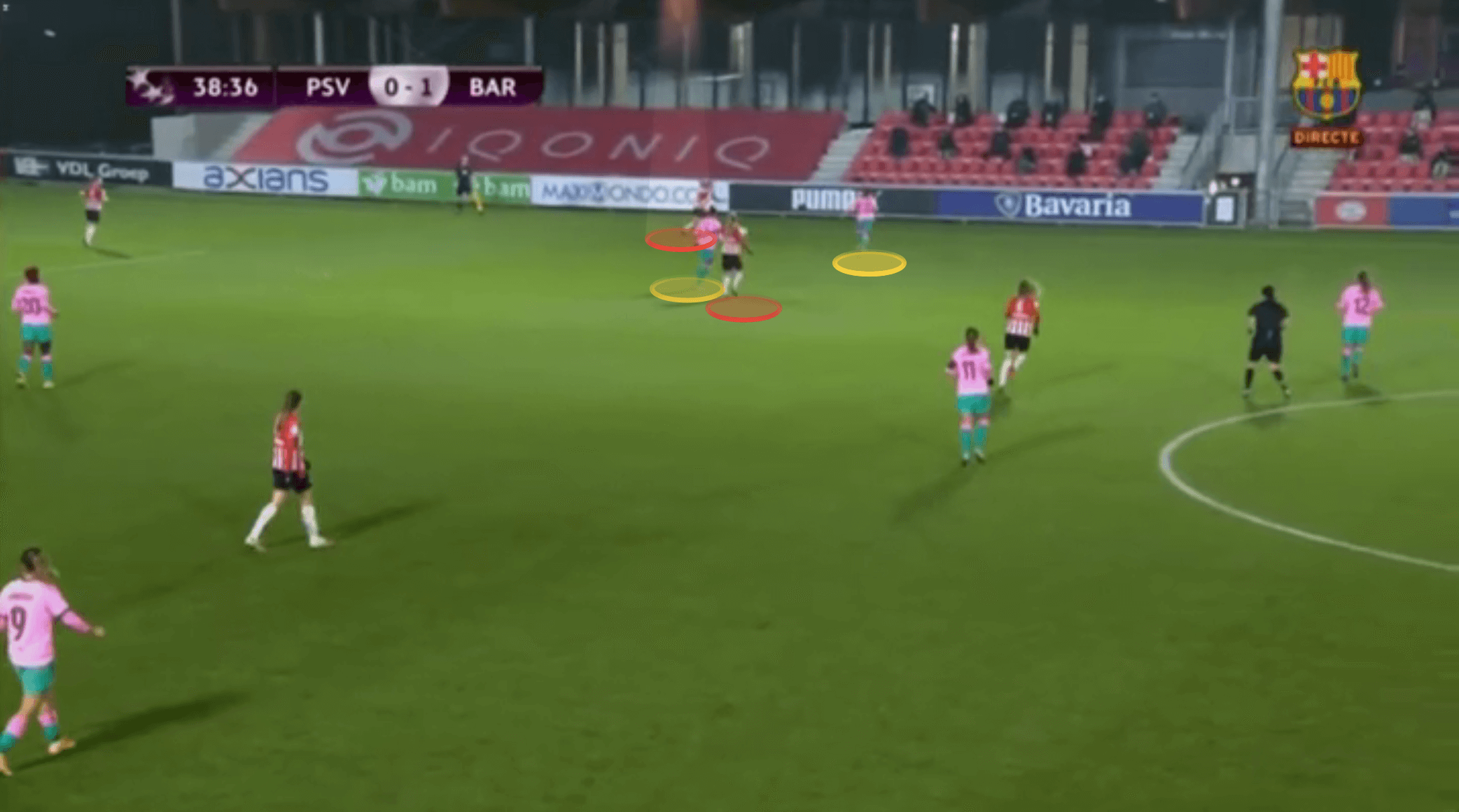 As the ball is worked back, the pivot remains in the forwards cover shadow, and Barca refrain from pressing the new ball-carrier. 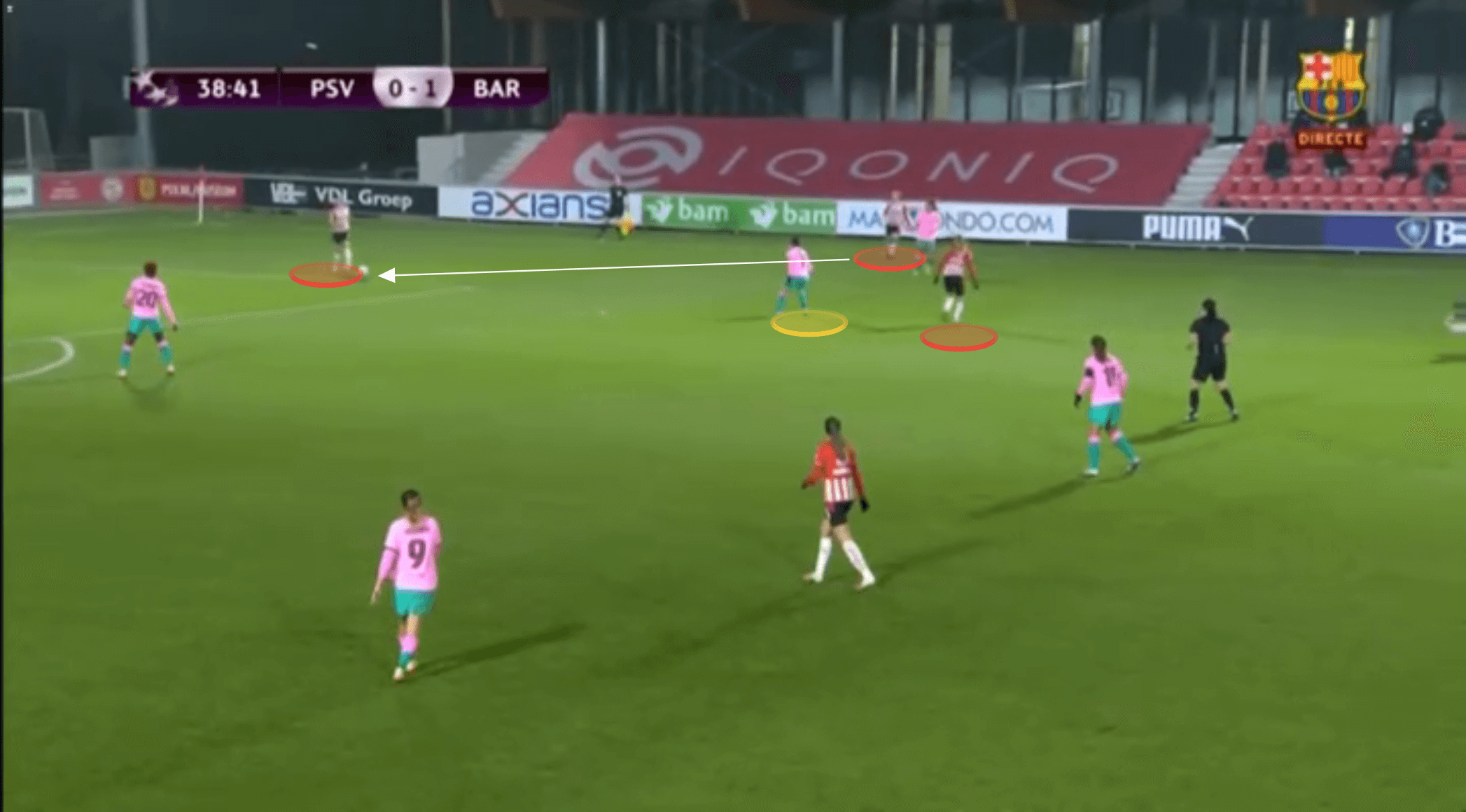 However, there are times where Cortes uses a similar configuration to the set up shown against the goal kick earlier in this section. Nevertheless, we can see an example of how Cortes still has an aggressive pressing set up, but again looks to react to the opponent.

Barca’s initial press from the front line is designed to show Real Madrid out to the flank, where the full-back is left open. However, as soon as there is an intention to make this pass, Cortes wants them pressed. By allowing the pass, and then immediately pressing, Cortes is forcing the opponent to make decisions on the ball before having time to truly evaluate the risks in the situation. 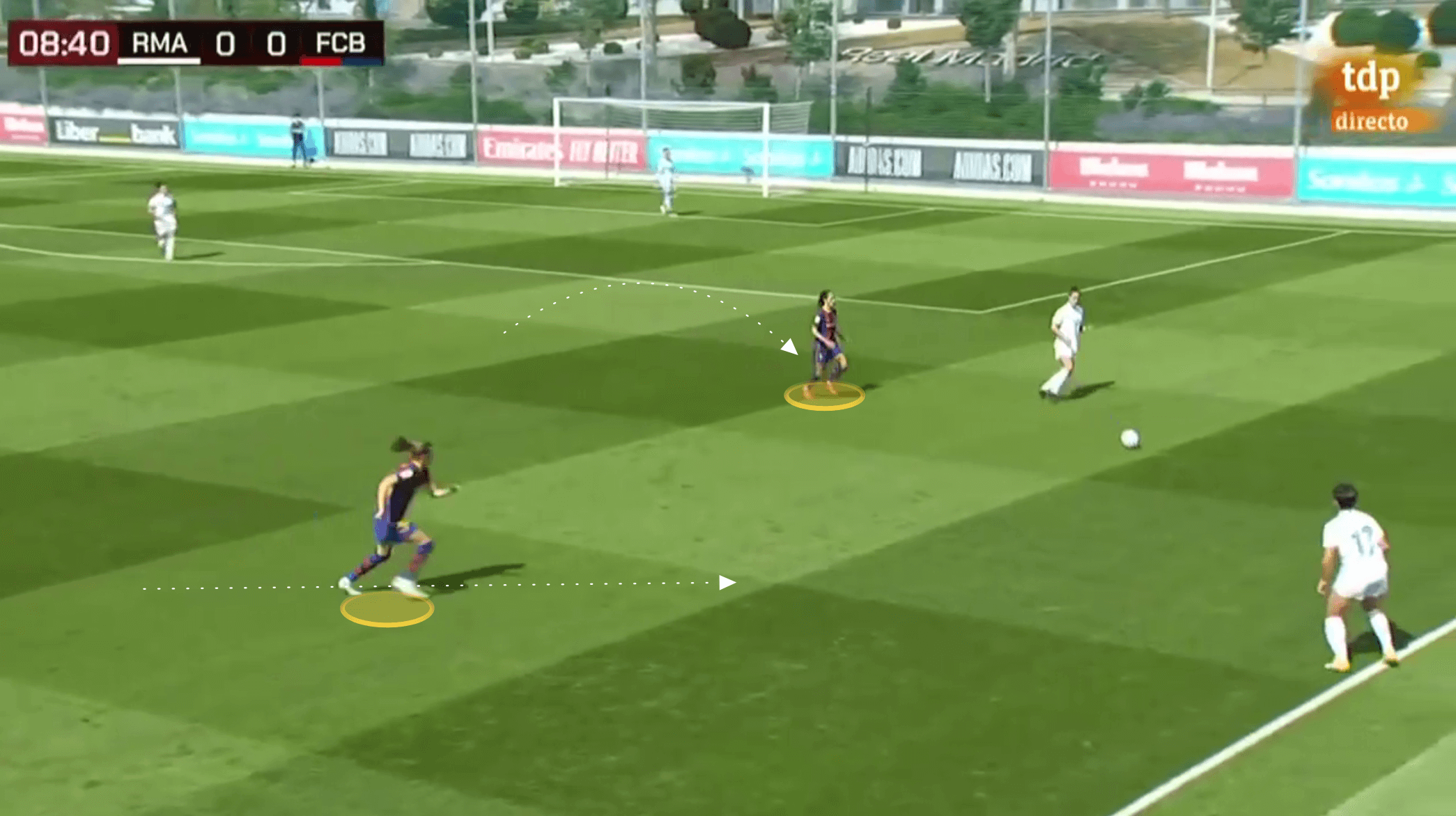 The pivot is left open in this instance, but again, as soon as there is the intention to play this pass, this player is pressed as well. 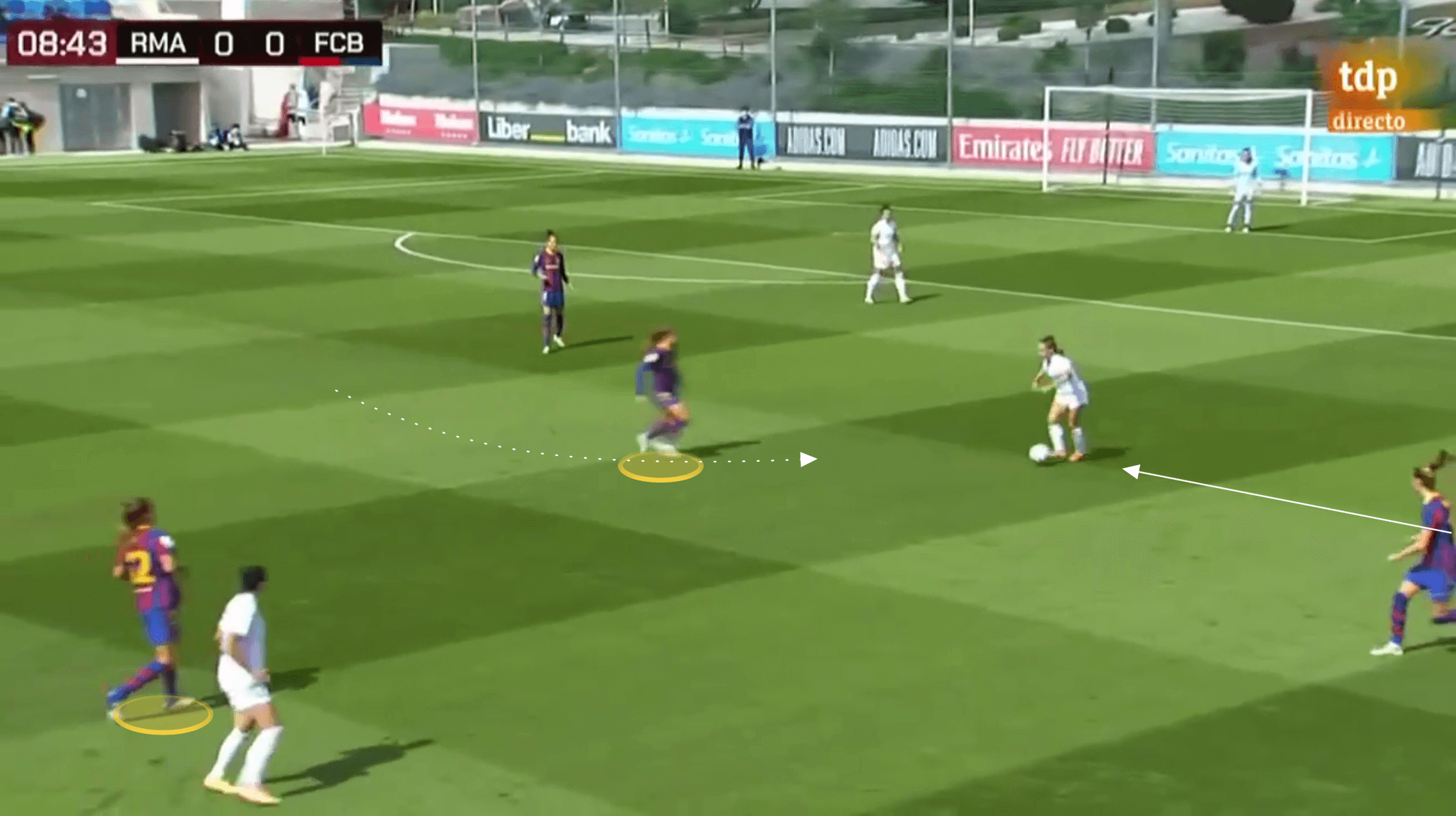 It results in the ball being worked back to the Real Madrid left-back, who is already under pressure, and this sequence is a culmination of Madrid being forced into making quick passes in a panic, such is their commitment to playing out against the press, but it ultimately leads to the left-back making a poor choice in playing a hopeful ball across goal, which can be intercepted. 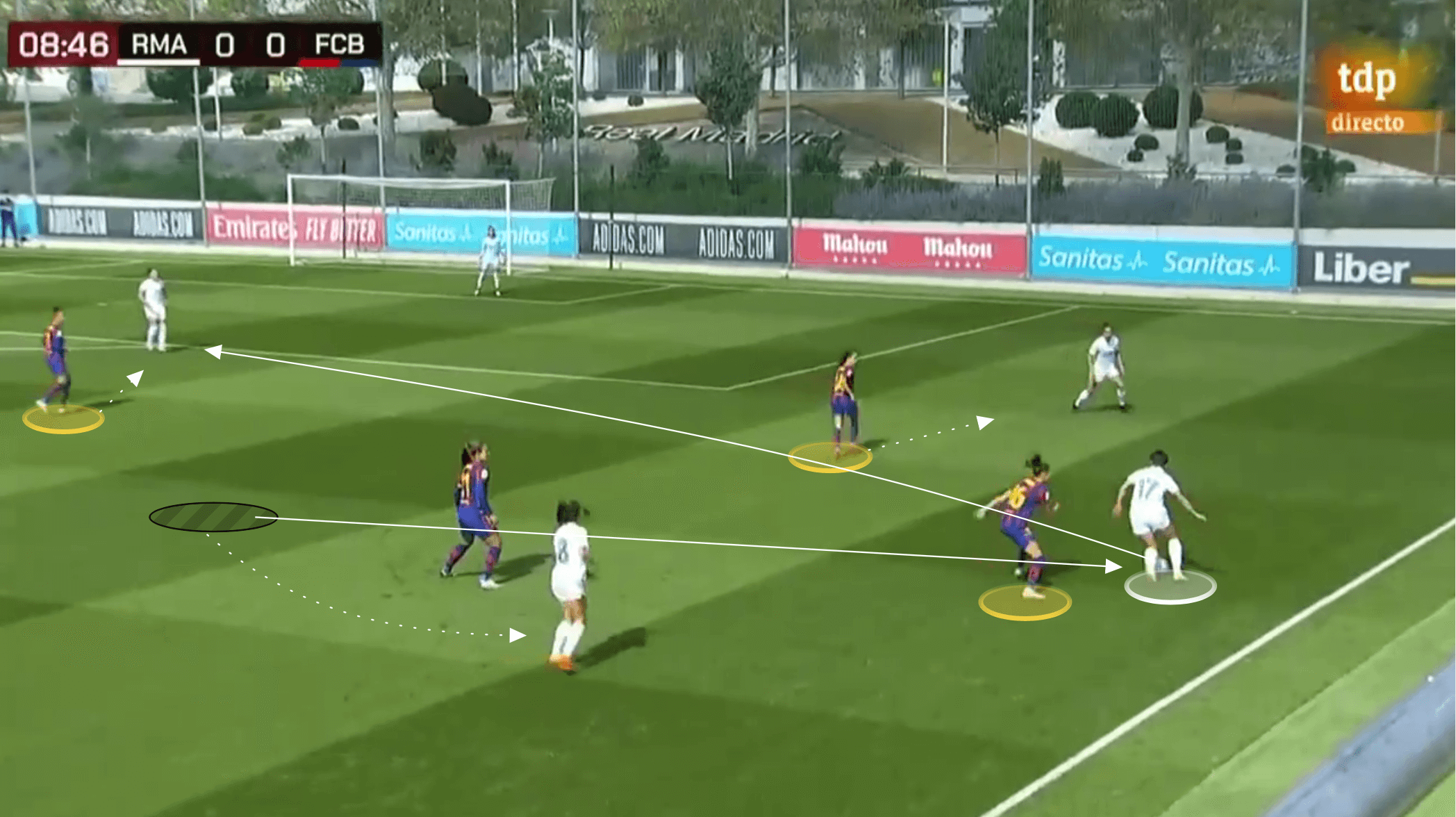 Cortes is a young manager, who is still in the early days of his managerial career, however, he has produced a Barcelona side that are certainly playing the Barca way. Cortes’ tactics have led to Barcelona playing a high-tempo, possession dominant style, filled with quick passing football, rotations, and overloads, and an out of possession style that has an emphasis on winning the ball back as quickly as possible to allow Barca to get back into their possession phase and dominate opponents.

It was Guardiola who said that his Barca team were terrible out of possession and so needed to win the ball back as quickly as possible. We’re not saying that’s the case with this Barca side, however, Cortes has certainly embraced the spirit of his club, and is producing excellent results on the pitch.