Lille’s 2020/21 league triumph will be remembered for years to come. With an average age of 26 years – one of the youngest squads in Ligue 1 and all of Europe last season – Lille finished as the fourth highest scorers in the league and had one of the best defensive units, not only in the league, but in Europe’s big 5 leagues, conceding just 23 goals in total.

The following visualisation shows LOSC Lille’s ranks for some of the key metrics in Ligue 1 last season. 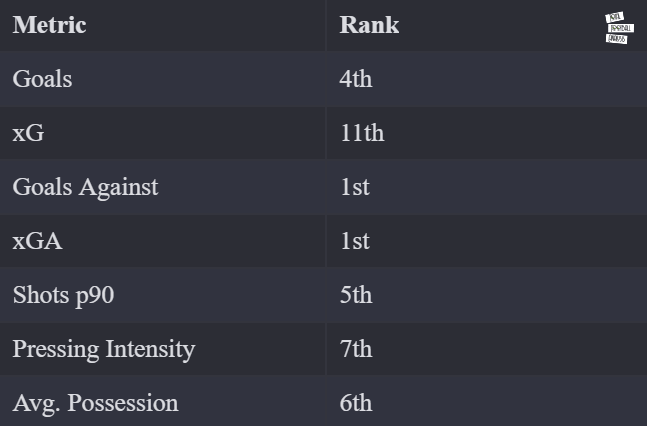 As shown in the graphic above, it’s Lille’s defensive record that stood out. In addition to losing their manager Christophe Galtie to OGC Nice, they have already lost Mike Maignan in the transfer window to AC Milan. Another key member of that squad who played an important role in helping the defensive unit was Boubakary Soumaré. Soumaré has left as well, joining Premier League team Leicester City. Other players including Sven Botman are linked with a move away from the club, at the time of writing. Losing any further players would really hamper any kind of hopes Lille have for retaining the title.

At the start of the 2021/22 season, Lille have only two points from their first three games already conceding 34% of the goals they conceded last season. After a positive start to the season beating PSG in the Super Cup, things suddenly look somewhat bleak for the defending league champions. The injury to Renato Sanches also means that they will miss an in-form player. The task at hand for Lille is huge but they are known to prove people wrong, and if they are to do it again, young players like Timothy Weah, Jonathan David and Sven Botman all need to step up.