In the summer of 2019 Hirving ‘Chucky’ Lozano became the most expensive Mexican in the history of the game after signing his contract to play for Napoli at the Stadio San Paolo, for a reported £36 million fee.

Hirving Lozano was the marque signing for Carlo Ancelotti as the side from Naples looked to finally dislodge Juventus as Serie A champions. Lozano, then 24, left behind Holland and his former club PSV after two impressive seasons.

The Mexican winger played 4,822 minutes of football in the Eredivisie across two seasons, netting 17 goals and providing 11 assists in both campaigns, providing Hirving with an impressive goal contribution every 86 minutes.

Capable of playing anywhere along the frontline, Hirving Lozano’s versatility made him an attractive figure in what was already an impressive trident (Dries Mertens, Lorenzo Insigne and Arkadiusz Milik) in the Napoli attack.

In this scout report, we explore the role which Hirving Lozano has played for Napoli, examining the Mexicans contribution across the defensive, middle and attacking thirds of the pitch through a tactical analysis.

This season Napoli have favoured two tactical formations, former manager Carlo Ancelotti favoured a 4-4-2 system, using these tactics in 73% of his games in charge. After the dismissal of Ancelotti, Gennaro Gattuso has reverted back to a more familiar system of 4-3-3 which he has implemented in all of his games so far in Serie A. 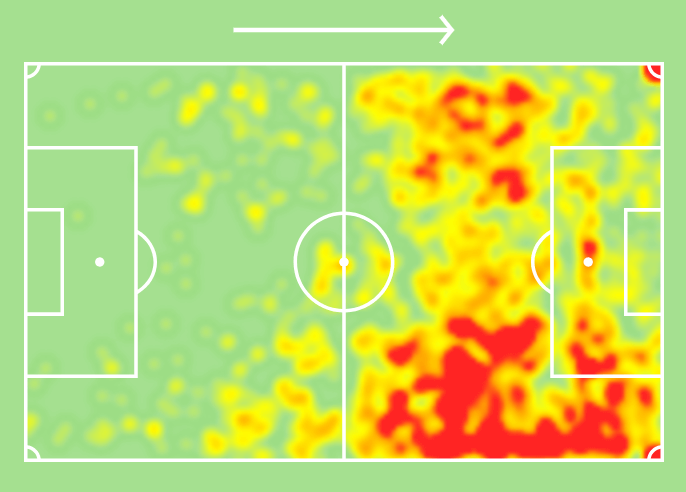 Hirving Lozano played every minute of the 2018/19 season for PSV Eindhoven operating as a winger. Looking at the Mexicans heatmap above you can see how effective he was when playing from his favourite role.

Despite Lozano’s success in this position, the Mexican has played 701 minutes for Napoli as a centre forward and only 197 minutes in his natural position as a winger. The injuries sustained to Napoli’s striker Arkadiusz Milik during the first half of the season forced Carlo Ancelotti’s hand, the Italian clearly saw Lozano as the best-fit to fill this void, however, the unfamiliar positioning paired with Hirving transitioning to one of the most tactical leagues in Europe has contributed to the Mexican lying dormant in Naples. 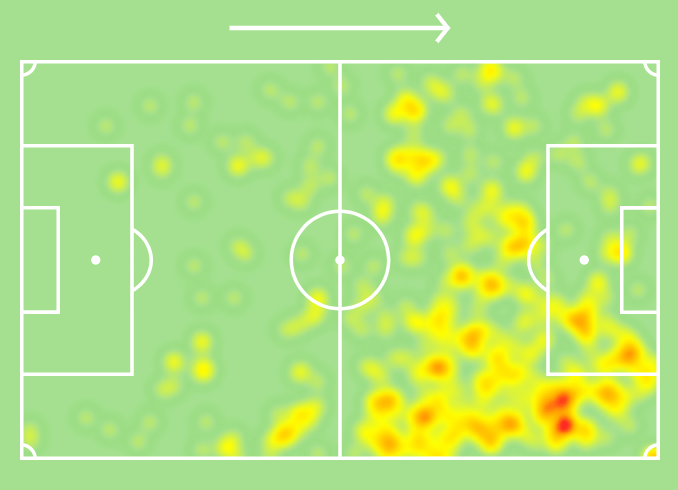 Carrying out an analysis on Hirving Lozano’s heat map from his time at Napoli, it is clear to see that the player despite being labelled as a centre forward would often operate from the right flank as he looked to involve himself in the game, favouring his more natural positioning which he would adopt as a winger. It is from these areas of the pitch that Hirving can look to utilise his dribbling ability, a feature of his game which made him stand out during his time with PSV. 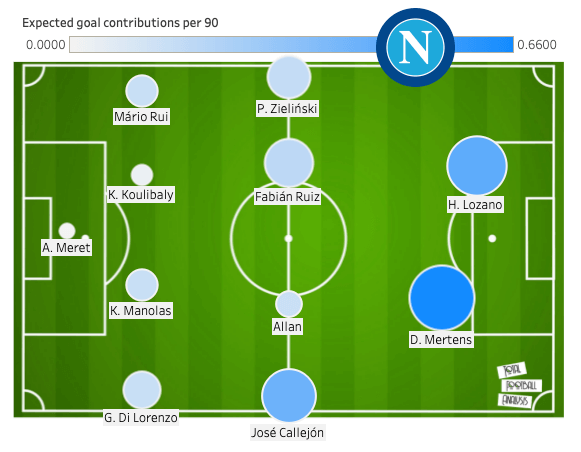 The above data visualisation which captures the expected goal contributions from Napoli’s most frequently used starting eleven highlights Lozano’s importance to the team. The Mexican despite only scoring three goals for Napoli and contributing with two assists in all competitions is still one of the main threats for the side from Naples.

Ability on the ball

There is no doubt that Hirving Lozano is a talented and extremely effective footballer with the ball at his feet, the Mexican always looks in control when isolated in a 1v1 situation against a direct opponent.

In order to highlight how effective Hirving Lozano is with the ball at his feet, we have conducted a data analysis below, looking at all Serie A forwards who have played over 700 minutes for their clubs. This analysis looks at the key metrics dribbles per 90 and successful attacking actions. 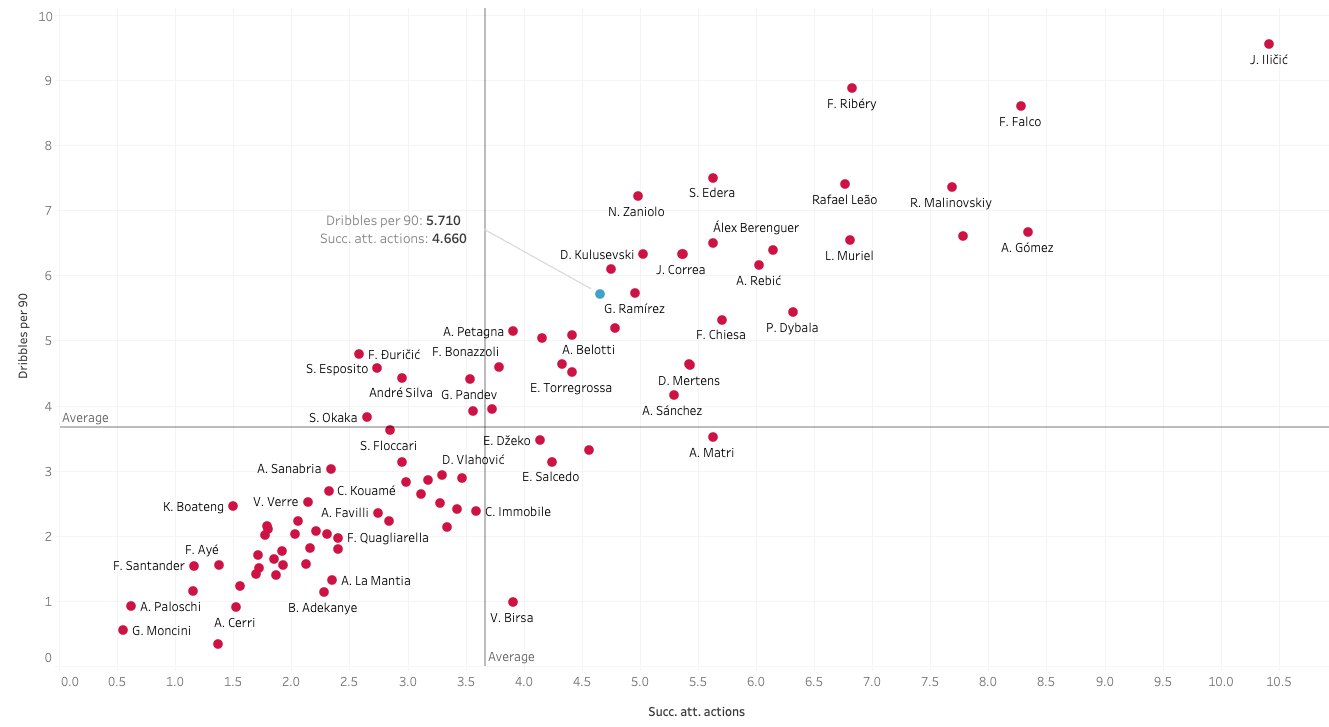 As you can see from the above data visualisation, Hirving Lozano is performing above average in relation to both metrics. Lozano has a successful attacking actions value of 4.66 which credits his ability to influence the game in the attacking phase of the game. The Mexican also has a dribbles per 90 figure of 5.71, which positions the Napoli forward in the 80th percentile, this should come as no surprise considering his history as a winger. 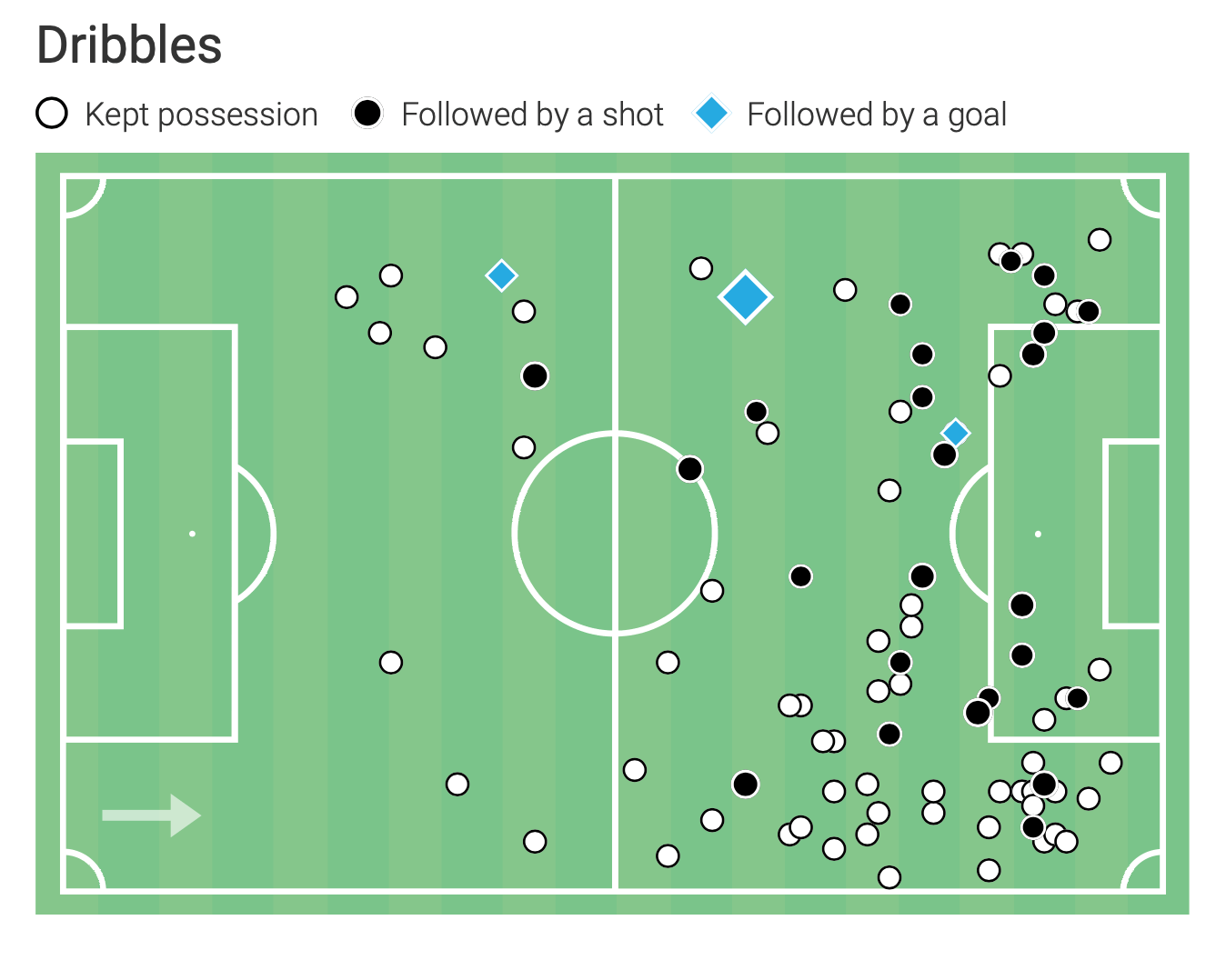 The above image shows Lozano’s dribbles for Napoli in both Serie A and the UEFA Champions League, as you can see the majority of these are within the attacking third and often take place within the outside vertical channel or within the half-space. It is in these situations that Lozano can use his ability on the ball to manipulate the defender to his advantage, making him such a threat to the opposition.

An example of Hirving Lozano in this situation can be seen in the above image against Torino, Lozano receives a progressive pass from Giovanni Di Lorenzo in the wide vertical channel, the Torino left-back Diego Laxalt is too tight to Lozano and the Mexican senses this and uses his ability to turn on the ball and attack the half-space.

As play moves on you can see how Napoli use the overload concept in order to force the opposition into tough decisions under pressure. Laxalt opted to drop off to cover the overlapping run of Di Lorenzo. This creates the space for Lorenzo to attack, the Mexican then decided to play an early through pass to Dries Mertens on this occasion, which was blocked by Nicolas N’Koulou.

Movement in the attacking third

A forward’s movement off the ball is essential in order to lose their marker and help to create goal scoring opportunities. In this next section, we carry out an analysis of Hirving Lozano’s off the ball movements in the final third for Napoli.

Firstly, against Milan Lozano can be seen making a clever run behind Theo Hernández, presenting Giovanni Di Lorenzo with a vertical pass into space. Not only does the Mexicans movement progress Napoli up the pitch it also forces the Milan defensive players to move out to engage with him in an effort to win the ball.

Unfortunately on this occasion, José Callejón does not anticipate Hirving Lozano’s movement to accelerate into the space which has been created for him, in fact, there are no other Napoli players in attacking third. This leaves Lozano with no other option other than to play a backwards pass and for Napoli to recycle their attack.

In the above image against Torino, we see Lorenzo Insigne making a progressive run into the attacking third on the counter-attack. Here the Mexican favours the attacking line of a winger, opting to attack the outside shoulder of the Milan left-back. This is a poor choice of movement from the Napoli player, his decision to move wide before attacking the line gives Hernández the upper hand, allowing the Milan defender to be in a position where he can easily cut out the pass.

The ability to process information in order to influence decision making is an attribute which separates the great from the good. Hirving Lozano has developed this quality over time as he has matured, helping him to select the correct pass or the option to shoot. Lozano’s effectiveness in relation to this quality can be seen in the below data visualisation which measures his quality of passing becoming an assists (expected assists, xA) when compared with deep completions per 90 and passes to penalty area per 90. 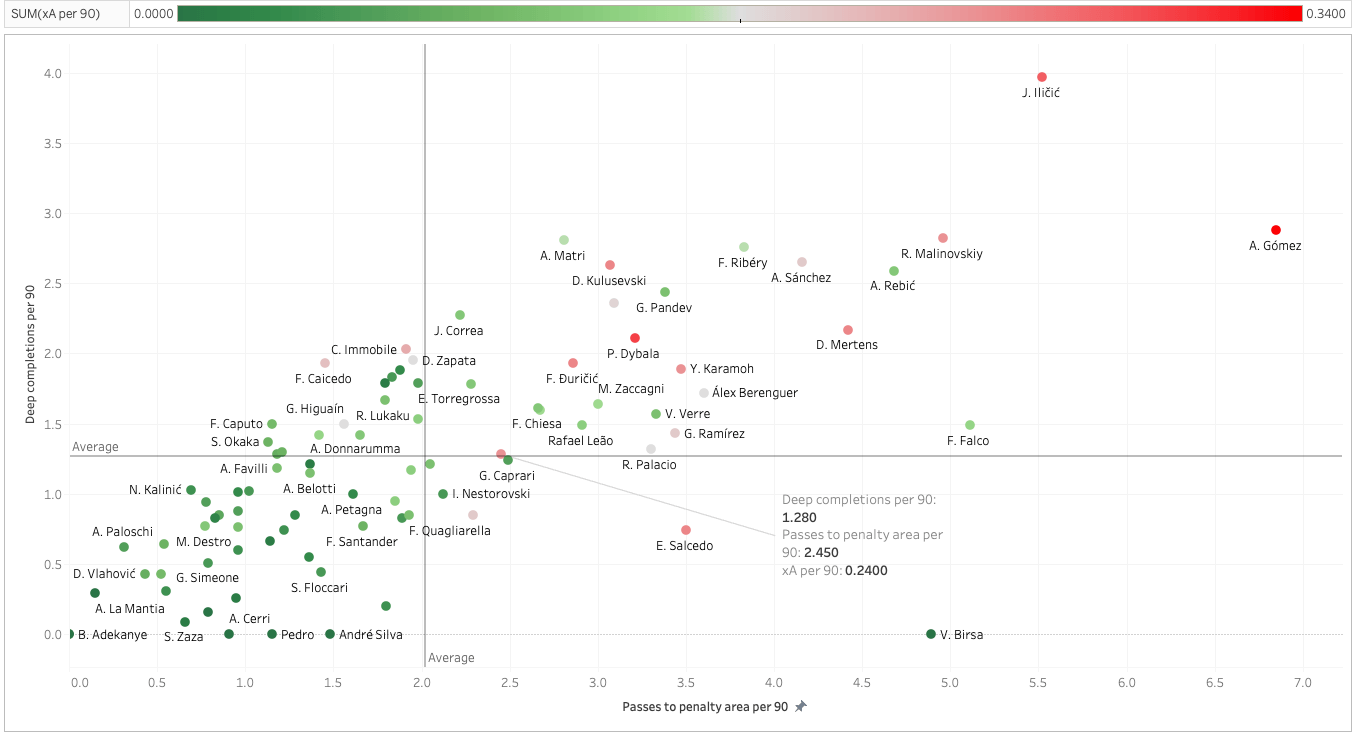 An analysis of Hirving Lozano’s positioning shows the player performing slightly above average in relation to both metrics with a figure of 1.28 per 90 for deep completions and 2.45 for passes to the penalty area. However, it is only when you apply the third dimension xA that the quality of his decision making and final ball really stands out.

Hirving Lozano is extremely dangerous when moving and accelerating into space. This gives Napoli an option to play quickly in transition when they can look to release the Mexican in wide areas. In the above image, we see this action as the ball is won back by Nikola Maksimović. Milan opting to play a direct ball in order to try and catch Napoli out of position. Maksimović plays the ball through the channel between the opposition left-back and central defender. 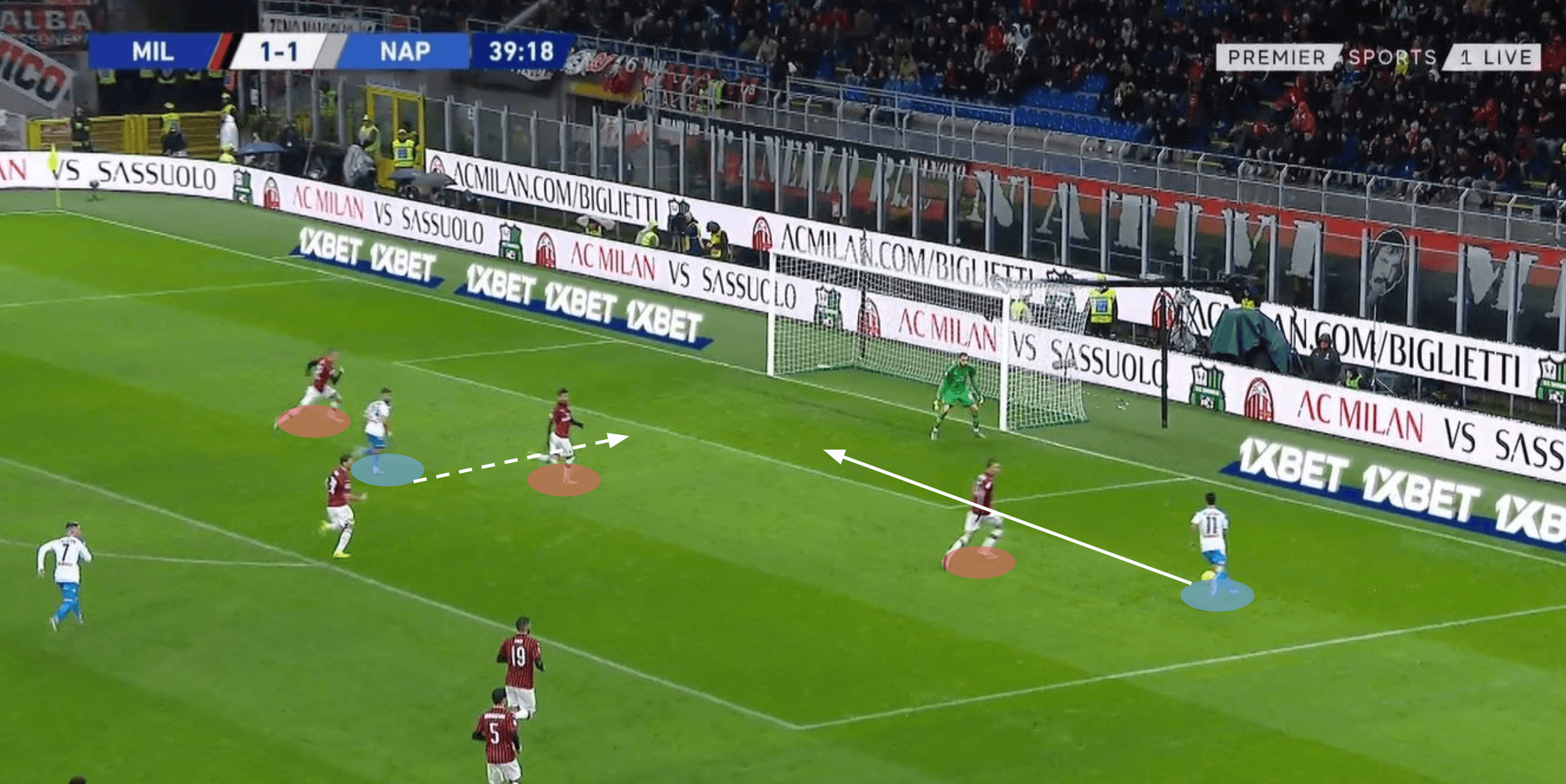 Lozano opts to drive in a low cross for the on-rushing Lorenzo Insigne from the type of position you would expect to see him in when operating as a winger. Unfortunately for Napoli the Italian lacks the presence which Arkadiusz Milik possess, the Polish forward has a better aerial contribution and his presence would allow Lozano to cross a ball in for him to attack, rather than play a ball across goal, which is easier for a defence to deal with. 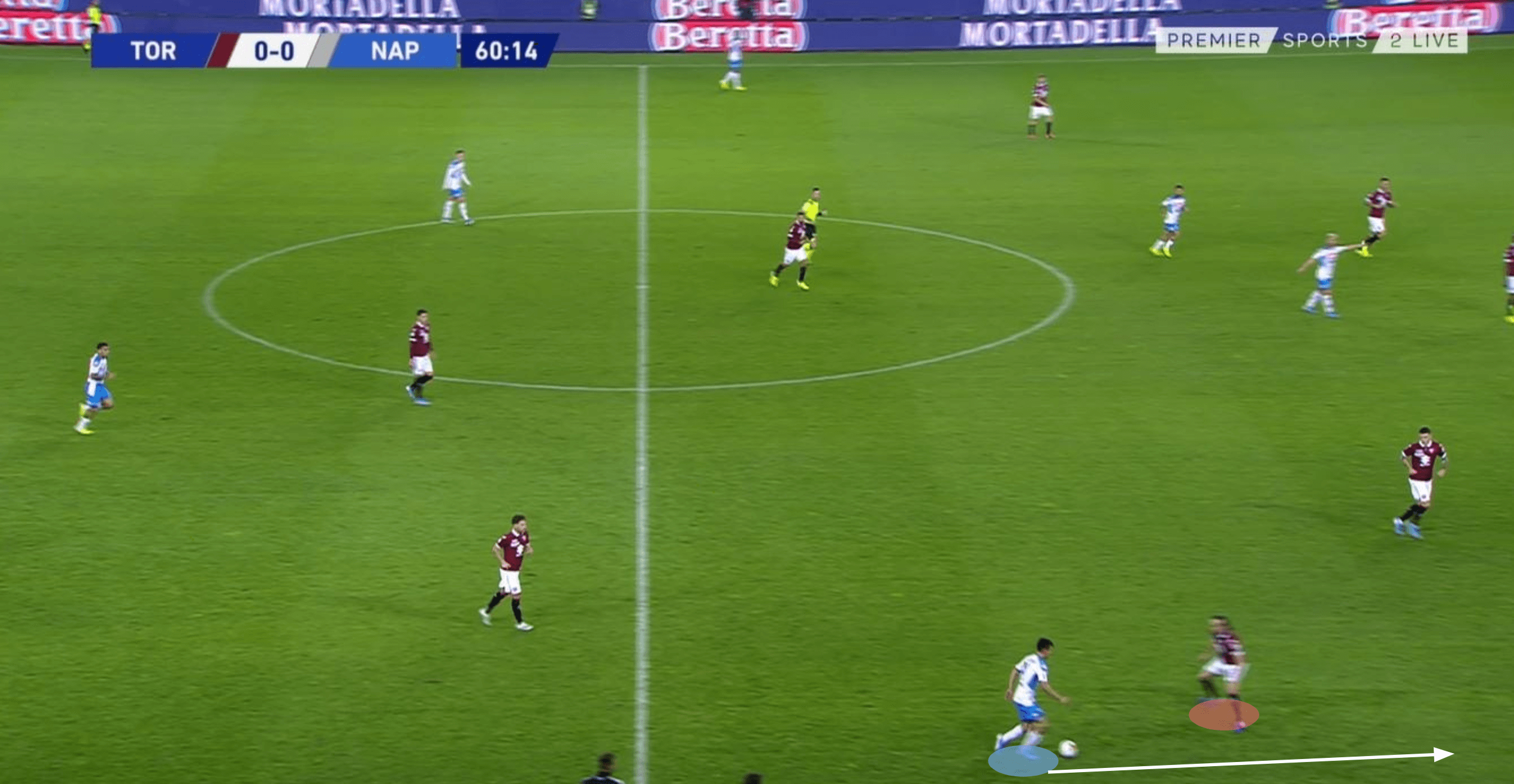 The final example highlights Lozano’s work-rate and decision making off the ball. Against Torino, Lorenzo decides to drop deep to receive a pass in the space which Fábian Ruiz has vacated as the midfielder looked to create an overload in the final third, Lozano can then be seen playing a progressive pass.

As we move play further on you can see the Mexican has continued his run into the attacking third, creating a passing option for Ruiz in the space which has been created by Dries Mertens as the Belgian has dragged N’Koulou out of position through his run. This example is just one example of how Lozano is a good fit for Napoli, a side which often rely on quick movements and overloads to exploit the opposition in the final third.

Hirving Lozano sits in the 92nd percentile for forwards in Serie A in relation to pass adjusted successful pressures, this metric is scored each time a pressing action leads to the team regaining possession of the ball within the next five seconds. Under Gattuso whilst playing under the 4-3-3 system, when the opposition are looking to play out initially we will see Napoli press the ball initially with their two wide forwards. These movements prevent the opposition from playing from central areas out to the wide zones in order to potentially bypass the press from Napoli and play into advanced areas. As Mertens and Lozano move in and press, Milik is able to drop off slightly, he will then press in a central area if the ball is played to this part of the field.

Despite the question marks surrounding Hirving Lozano and his future at Napoli, there is no doubting the Mexican’s ability to impact play in the attacking third.

The 24-year-old has certainly had a difficult debut season in Naples, in what has been a disastrous season so far for Napoli in Serie A.

The Mexicans underlying numbers excluding his actual goals and assists outputs are mainly above average, this is impressive considering he is new to the league and has played the majority of his minutes for Napoli out of position.

With Lozano contracted to Napoli until 2024 there is no rush to move the player on, Gattuso will be hoping the Mexican will erupt in his second season in Naples, helping to fire Napoli back in contention for the Scudetto.