21-year-old Edmond Tapsoba joined Bayer Leverkusen from Vitória Guimarães SC at the end of the 2020 January transfer. He has already made an immediate impact with his great defensive qualities, passing of the ball, composure in possession and even applying Peter Bosz’s tactics in attack. 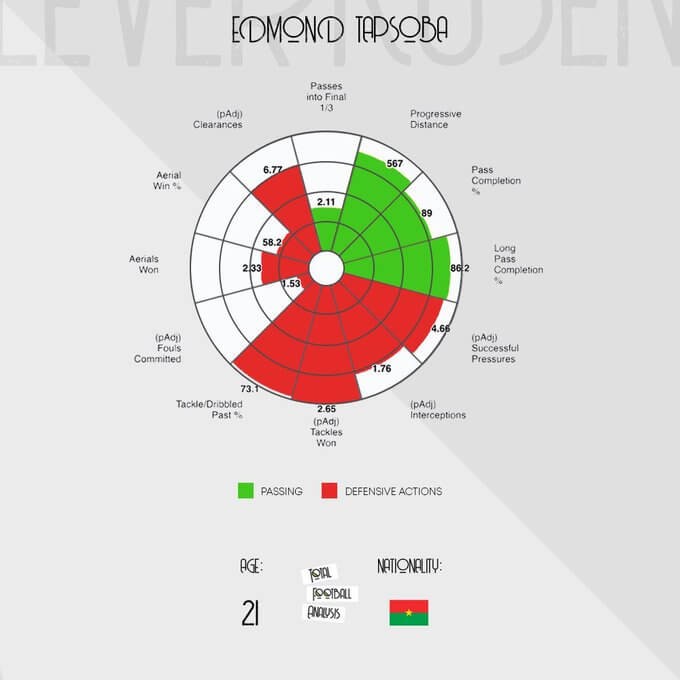 Tapsoba is deployed as the left centre-back in a back three but he has been used as the left centre-back in a back four as well. In the back three, Bosz’s tactical setup requires the centre-backs to split wide; this makes the wide centre-back, wide midfielder and wide attacker all position themselves in the channel and this gives  Leverkusen the ability to flow the ball between the thirds. This allows quick attacks to be instigated through channels created by Leverkusen’s tactical positioning. With Tapsoba’s great ball retention and ability to keep the ball under pressure, he is the safest option if Leverkusen are pressed. Tapsoba also has the strength of being able to find his teammates once he has retained the ball, this has been vital for his side. This is shown in the player radar across the season, his passing stats are high as he has 89% pass completion and it remains high when factoring in his long passes also, with only a slight drop to 86.2%. Additionally, he is yet to get dispossessed when in pressure situations in the Bundesliga this season, even with a high of 11.6 passes per 90 under pressure passes received, once again highlighting his composure on the ball.

However, it’s not all about his ability in possession. As the data and statistics show, Tapsoba’s defensive attributes are helping him shine. His athletic size allows him to easily out-muscle opponents, he has won 75% of his tackles this season when players are trying to dribble past him, as shown in the radar. This is the highest in Leverkusen’s squad and is beneficial to them as they like to press and play with a high line to squeeze the opponents.

His effect since coming to Leverkusen has been astonishing, Tapsoba has been the missing piece to the puzzle. In the three games before he joined a centre-back, full-back or a midfielder had to play out of position to fill this role but now he is acquired he is able to make the role his own, much to the benefit of Leverkusen. This is a player that everyone will need to keep an eye on.