This data analysis will help us to understand why Club Brugge is standing clearly on top of the table. When a team has such a clear advantage above their competitors, it means they have something others don’t. This analysis will search for those fields where other clubs can’t compete with Club Brugge.

To be able to determine why Club Brugge is dominating we will compare their players with other players in the Belgian Pro League as well. Comparison will cover all positions on the field, so that we can connect players who are making an impact in which area. Players comparisons will include players with a minimum of 500 minutes played with data collected by Wyscout.

Coach Phillipe Clement made his team adaptable to various types of formations and tactics. Club Brugge started the season playing with four at the back in 4-1-4-1, 4-2-3-1 and 4-3-3 formations. When schedule started mixing with the Champions League group stage he adapted his team mostly to 3-5-2 formation. Three at the back worked really well for Club Brugge this season in Belgian Pro League, having played 14 times in that formation. What impresses is how Clement prepared his team for every opponent separately. From 44 games played in all competitions, he used eight different formations to exploit opponents’ weaknesses.

Above are examples of Club Brugge formations and most used players in these formations. To make most of this formation Clement made two players to adapt to positions they rarely or never played constantly. He made their late summer signing Éder Balanta to adapt at playing defensive midfielder although his main position is central defender. Clinton Mata, who is initially right full-back, is lined as a right central defender in the defending trio. It is worth mentioning, Mata played half of this season’s games as right-back and half of them as a right central defender. The front duo is often rotated due to the large number of attacking options and their versatility to play multiple positions. De Ketelaere, Okereke, Dennis, Schrijvers, Tau, Diagne, Openda and winter signing Krmenčík all played their part in Club Brugge’s offensive lineup. Midfielders Vanaken and captain Vormer are almost irreplaceable based on their performances on the field. Deli and Mechelen have started a high proportion of the games in central defender positions and their backup is Mitrović. 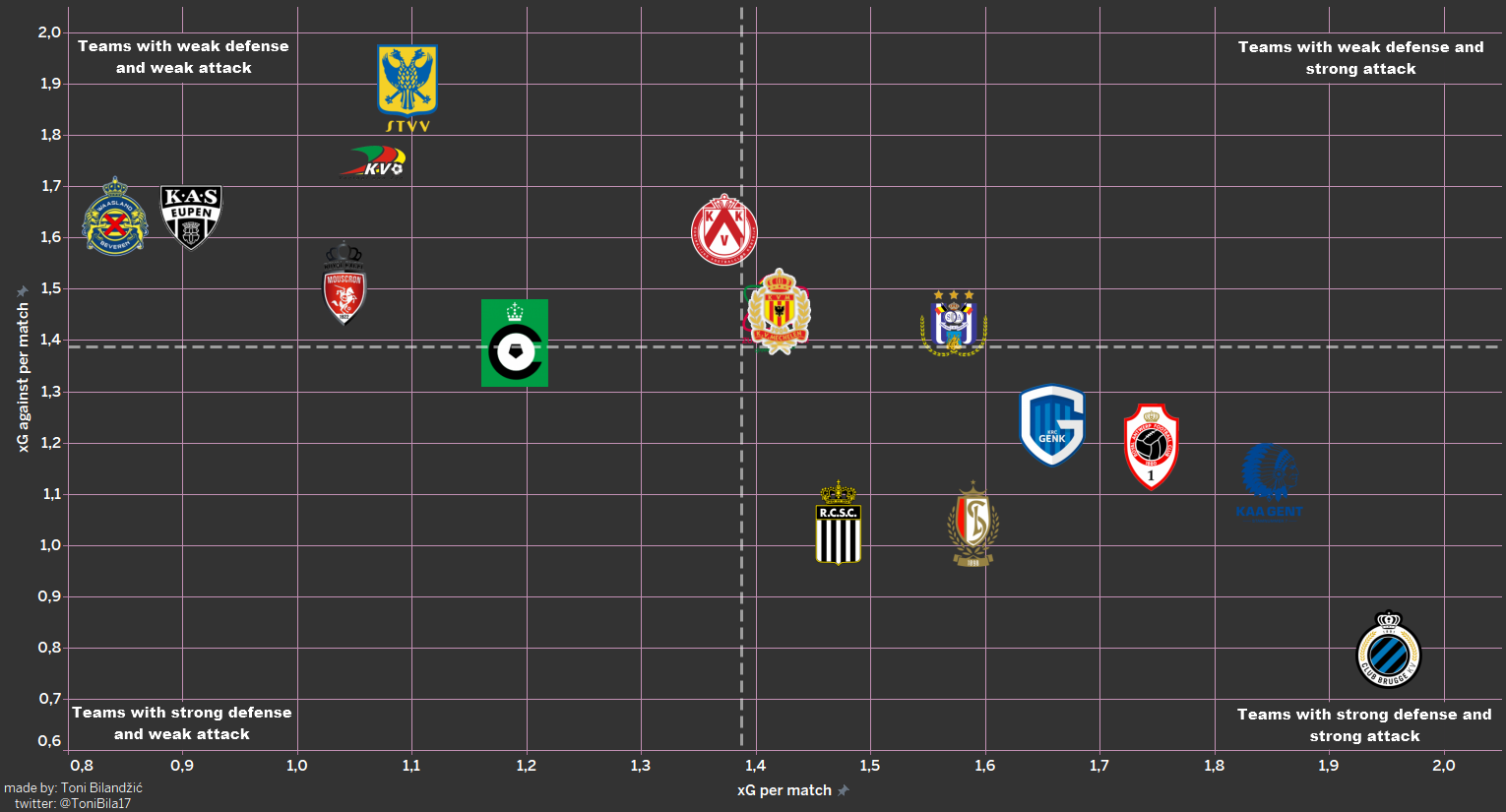 The graph above represents how Club Brugge are good in terms of expected goals for and against. Clearly they are the best in both statistics. Comparing these metrics to goals against Club Brugge in the table, we can conclude that they deservedly have the best defence in the league conceding just 14 goals. In terms of goals for, Gent scored one goal more than Club Brugge because Gent overachieved their xG by 5.4 goals while Club Brugge have 1.4 goals more than expected. These metrics will be further mentioned in the following sections.

Club Brugge has the best defensive record in the league. Despite many formation rotations they showed compactness and built a wall in front of Simon Mignolet. It shows that Clement really knows how to balance rotations and prepare the team for opponents. The graph below will show us one of the main reasons for their success. 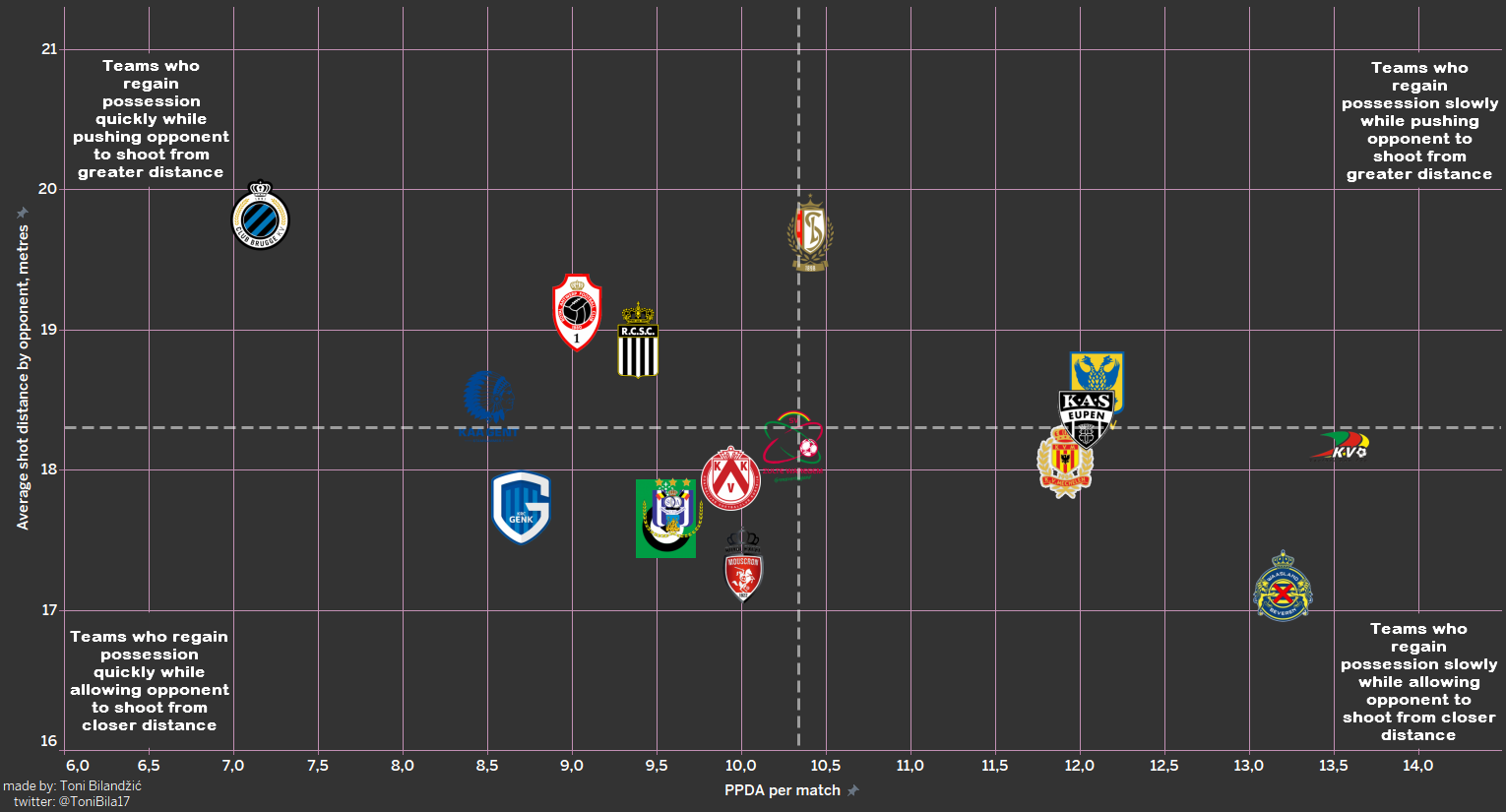 The graph above represents opponents’ average shooting distance and PPDA(passes per defensive action) for every team. Club Brugge is in the ideal place of this graph, letting the least number of passes per defensive action while pushing their opponents to shoot from longer distances. Their PPDA is similar to the Ligue 1 leading side Paris Saint-Germain. We can assume that their xG against is in correlation with those metrics above. High-pressure system and their tendency to not fall back when they lose possession but rather aim to counter-press immediately, gives them the edge over their rivals. Considering that their opponents shoot from a greater distance they have small xG against for a reason.

Although they have league-best xG against, they outperform it with great margin. They conceded 9.1 goals less than expected, so we should give credit to their goalkeeper Mignolet. The graph below will show us how many shots goalkeepers face per 90 and their save percentage. Addition to that graph is dot size, a bigger dot means more clean sheets. 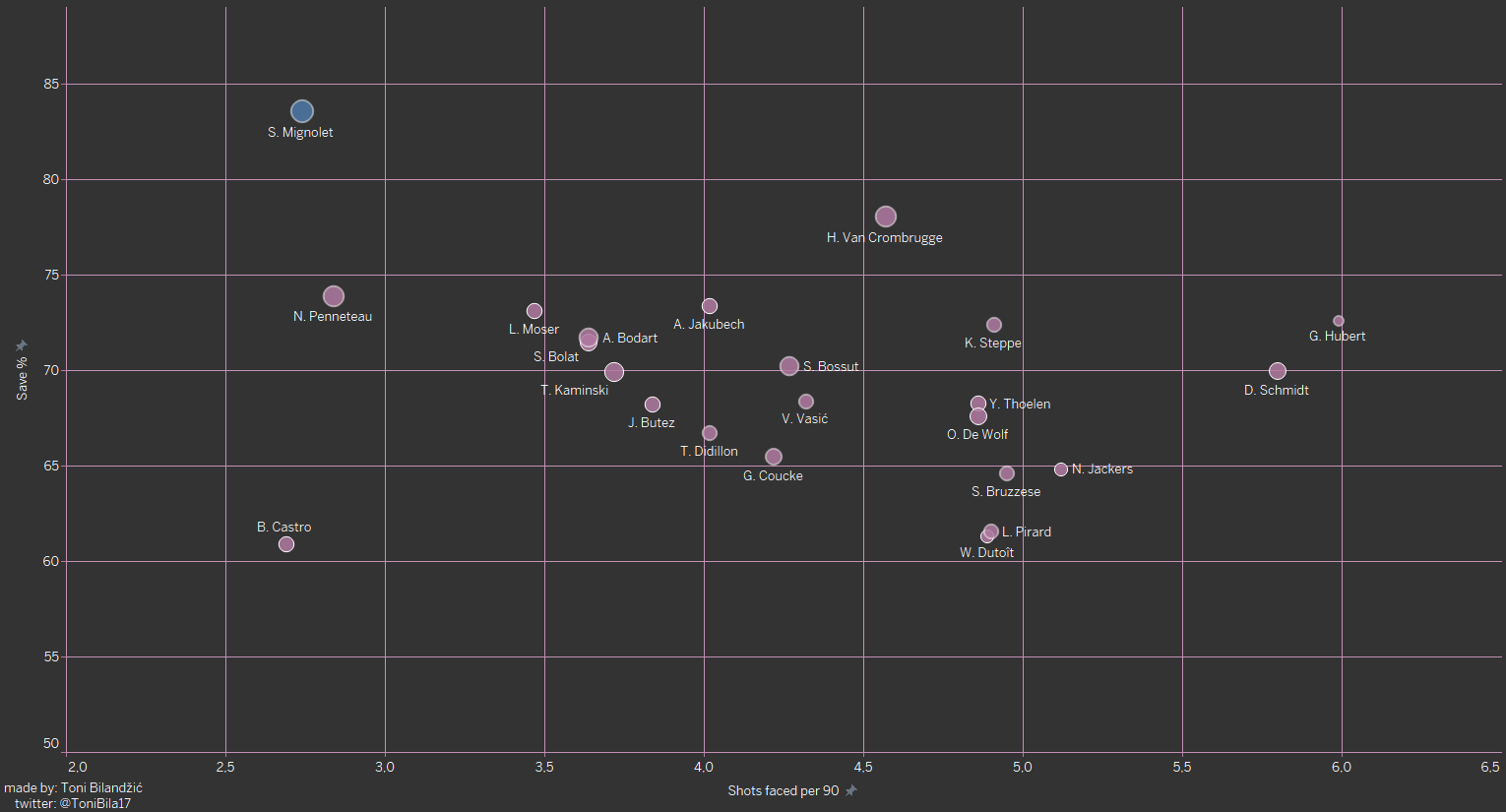 Because the high-quality team defending Mignolet faced 2.74 shots per 90, he saved 83.54% of shots he faced. Not only does he have a league-high save percentage, he has league-high clean sheets (16) as well. To find out how the rest of the team participates in those high-quality defending, we will display two graphs. First graph will compare central defenders and full-backs based on their PAdj interceptions(Possession adjusted interceptions) and defensive duels success rate. Second graph compares central midfielders based on their PAdj interceptions and their successful defensive actions per 90. 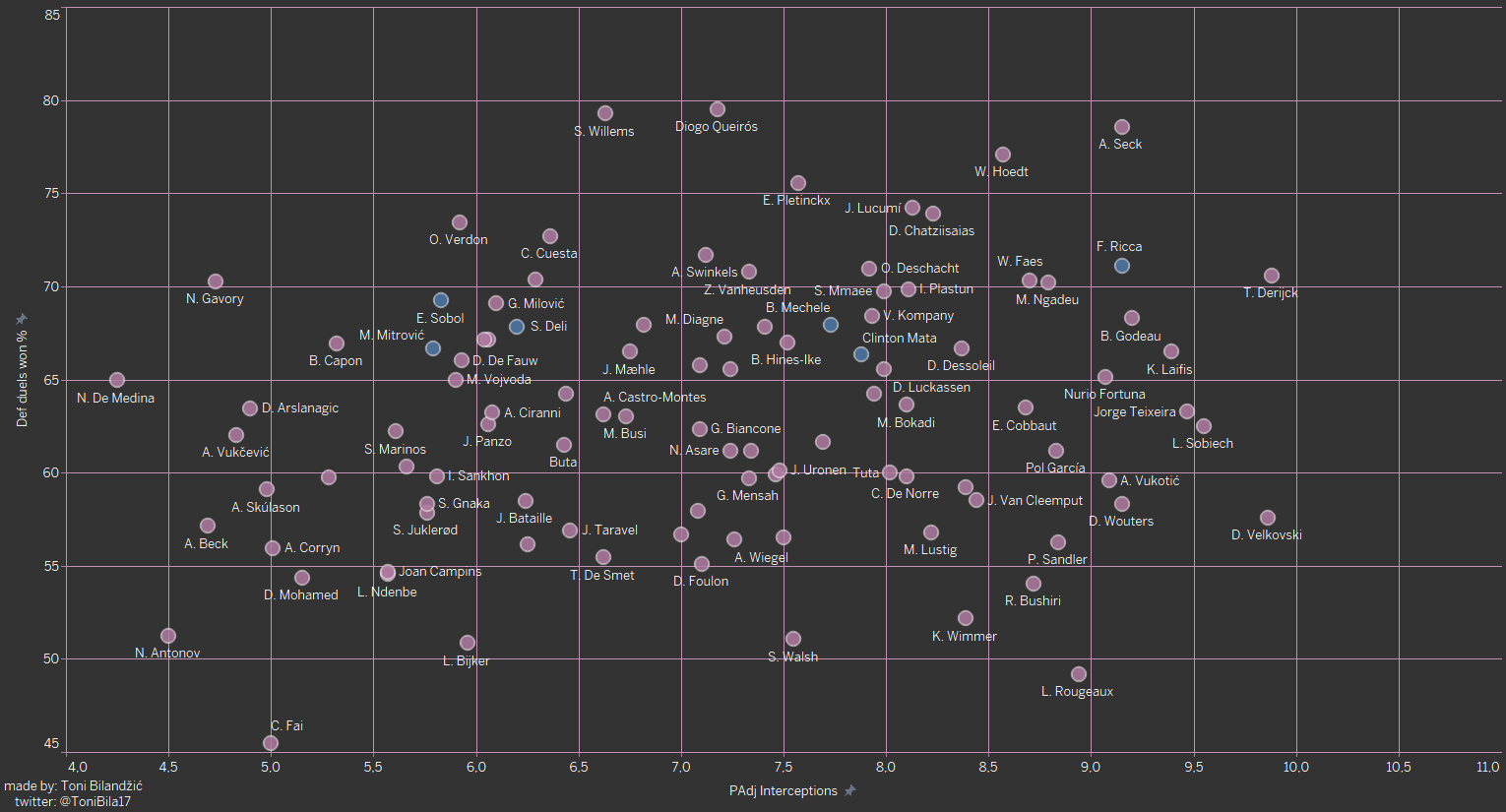 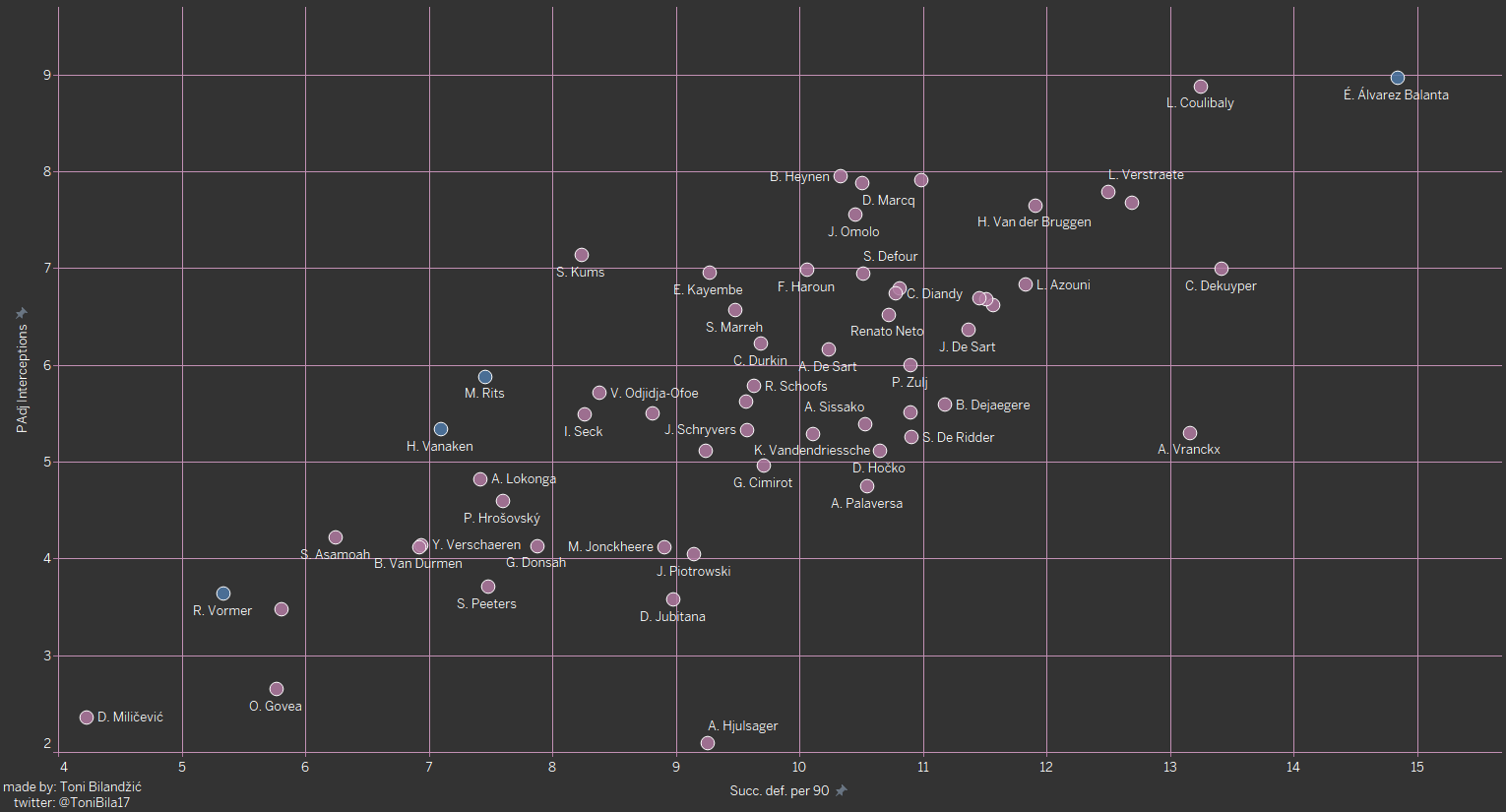 The graphs above are really great insight into how these players impact on the defensive end. On the first graph, the clear thing is that all Club Brugge defenders have won more than 65% of their defensive duels. Ricca, Clinton Mata and Mechele contribute a lot with their anticipation skills intercepting dangerous balls. The second graph shows how coach Clement made a smart decision to transform Balanta to defensive midfielder. Balanta’s defensive abilities help Vanaken, Vormer and Rits to have fewer defensive duties. With league-high PAdj interceptions and successful defensive actions per 90 Balanta outperforms all the other midfielders in the league when it comes to the defensive phase of the game.

The last thing we will evaluate in this section is how often Club Brugge makes mistakes in their own third and how often they recover the ball in the final third. The graph below will display these statistics. 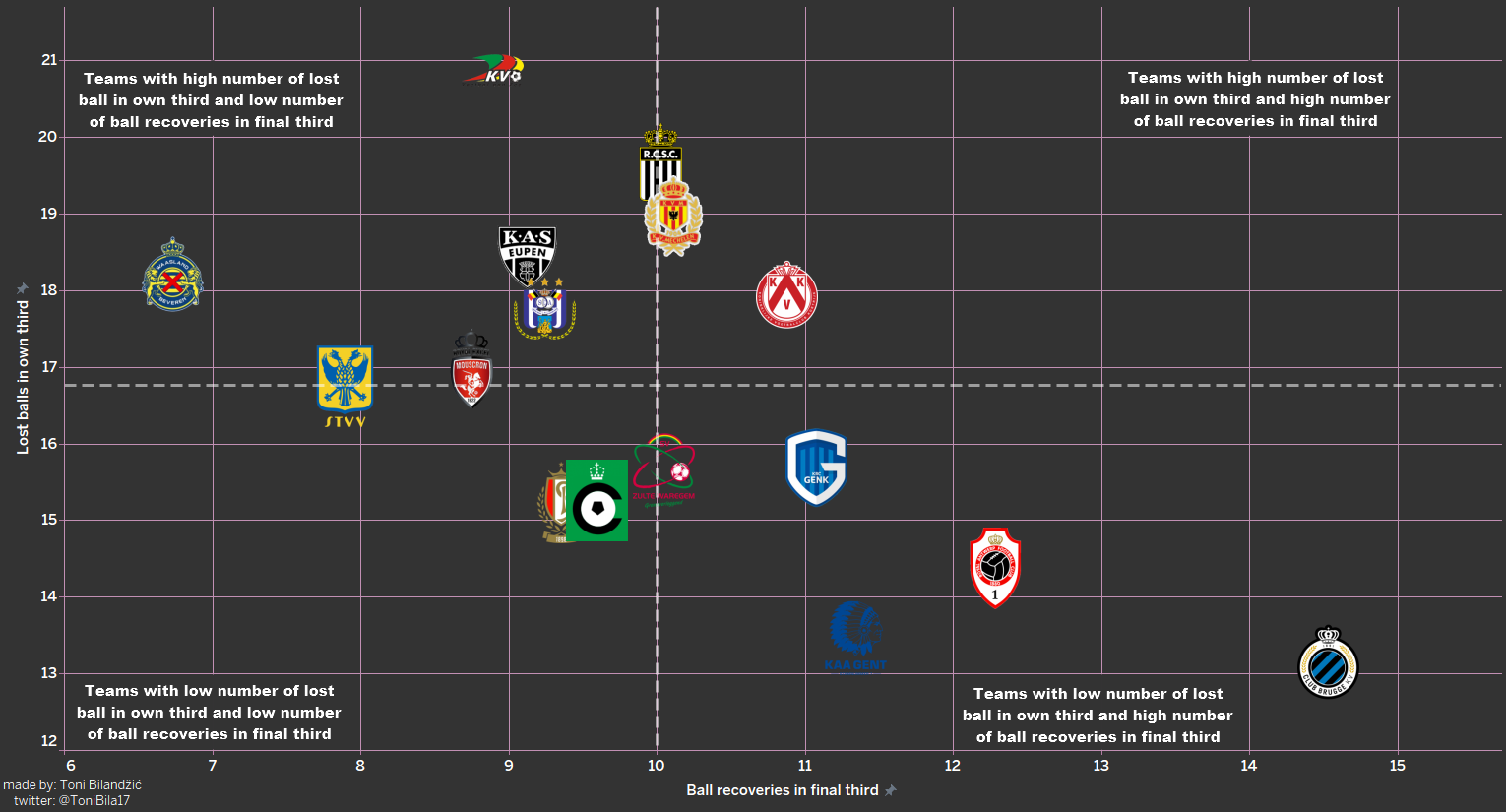 Club Brugge are careful with the ball in their own third and they make the least number of mistakes close to their goal. That shows team maturity and discipline which is vital in order to prevent opponents from getting cheap chances. They recover a high number of balls in the final third which is the effect of their high-pressure system. Recovering balls high up the pitch allows them to get into good chances while the opponent is unprepared.

Club Brugge has the second-best attack in the league, one goal behind Gent. With many attacking options, Club Brugge are always ready to adapt their attack in order to exploit the

defensive flaws of their opponent. Shots and average shot distance metrics could give us needed information why Club Brugge has league highest xG. 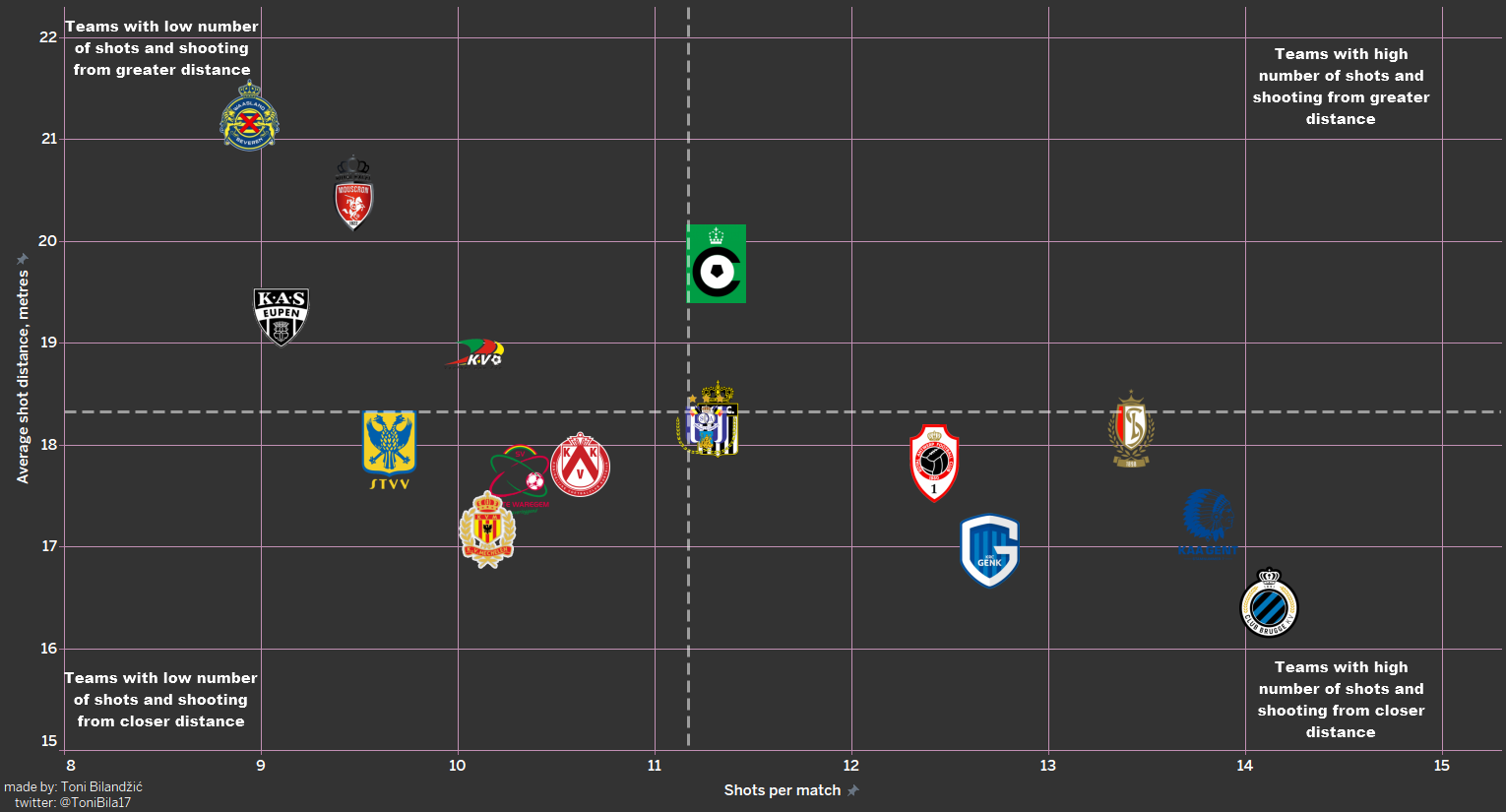 The graph above reveals why their xG is best in the league. They are the only team in the league who average more than 14 shots per match. Not only that they shoot a lot, they shoot from closer positions than the rest of the teams. Based on touches in the box and shots per 90, we could get the insight which Club Brugge players make an impact in dangerous positions. The graph below contains offensive players from the league. Because of rotations only six Club Brugge attacking players made more than 500 minutes. 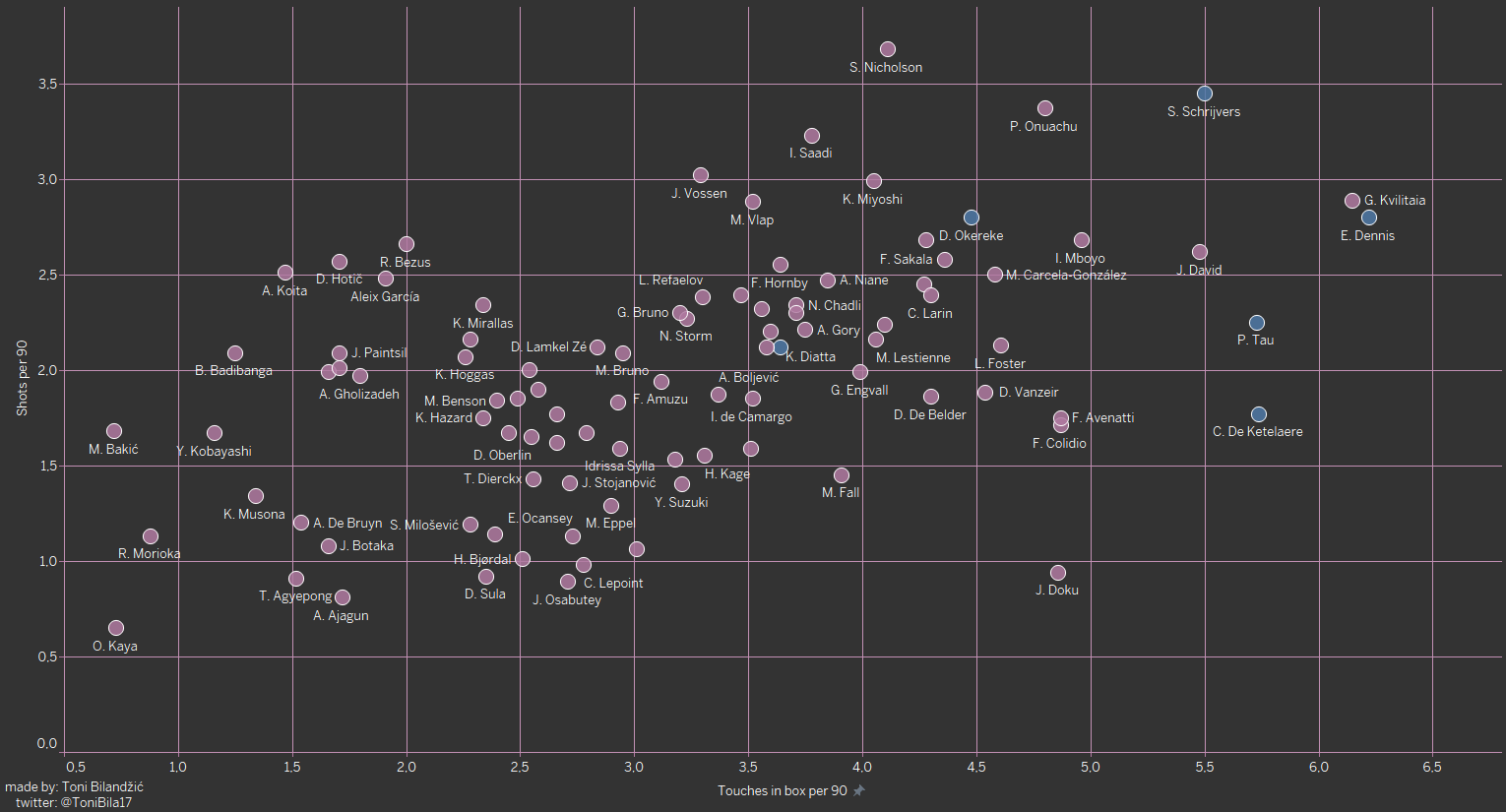 It is easy to spot Club Brugge players in the graph. From the top five players at touches in the box, they have four players, which is impressive. Five players shoot more than two times per 90 as well. Impressive numbers in these statistics show that Club Brugge players are dangerous in the final third. Dennis’ league-high touches in the box indicates that he gets in good positions close to the opponents’ goal and he shoots almost three times in the match. What needs improving is Dennis’ finishing, he only scored five goals in the league. 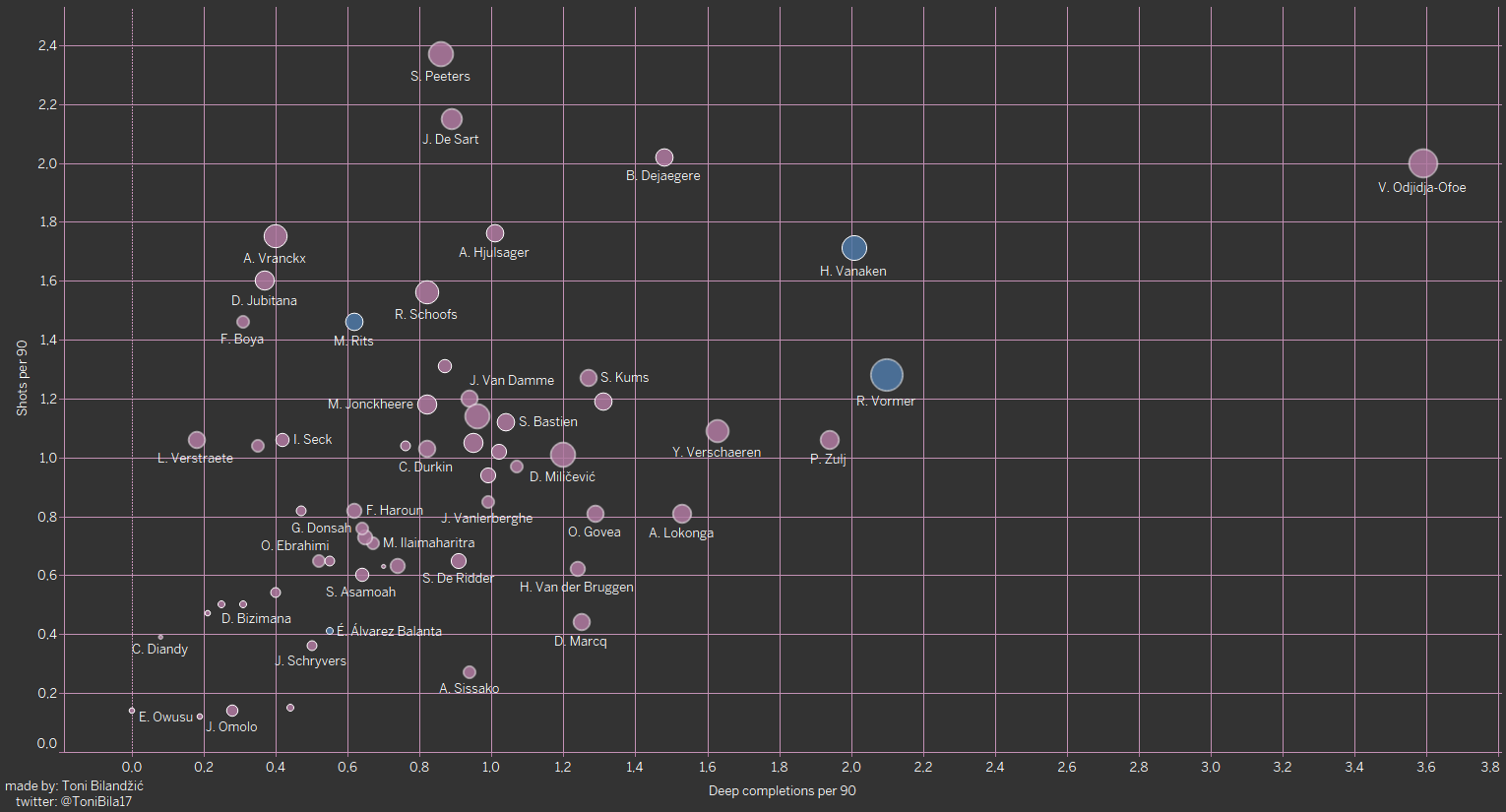 Vormer and Vanaken are a highly contributing duo. They average around two deep completions per 90 which shows their creativity while shooting more than once per 90. Vormer is the best creator in the league with 13 assists to his name. Vanaken is third in goalscorer list with 12 goals this season. Now we can see clearly how valuable Balanta is, his role enables these two to dedicate their game more in the attacking phase.

We will now evaluate average ball possession in correlation with touches in the box. Club Brugge’s offensive players have shown dominance in touches in the box, so, it is expected for them to be on the top of that metric as a team. 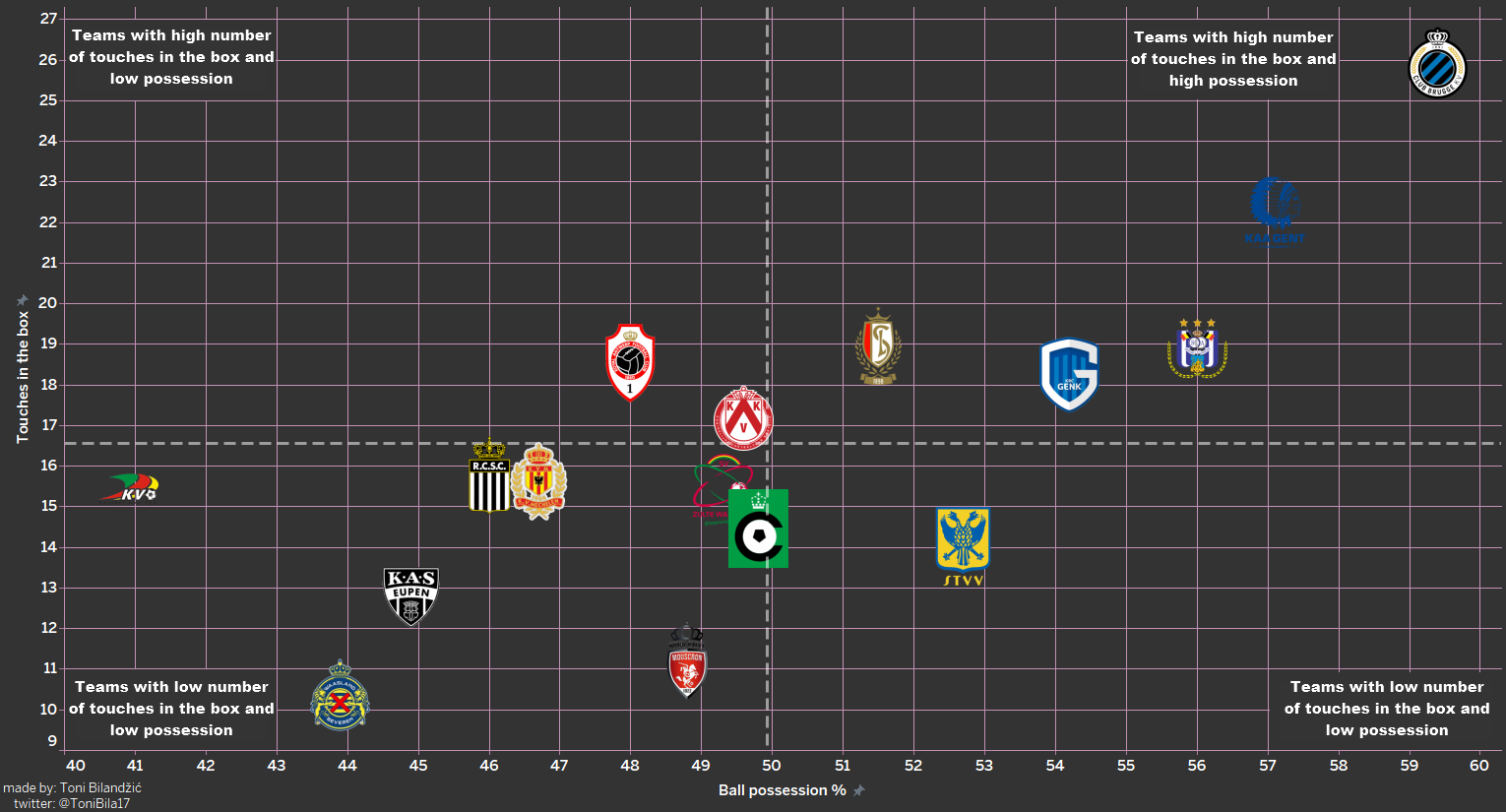 As we expected, Club Brugge dominate in touches in the box, but in average ball possession as well. To be able to get in that many situations to enter opponents’ penalty area team needs to provide a higher number of efficient passes. Their players tend to attempt smart passes between the opposition lines finding teammates in advanced attacking positions. Because of high ball possession, it is important for a team to have defenders who are capable to participate in the build-up play. The next graphs will show how defenders contribute to build-up play with their progressive passes per 90 and passes to final third per 90. 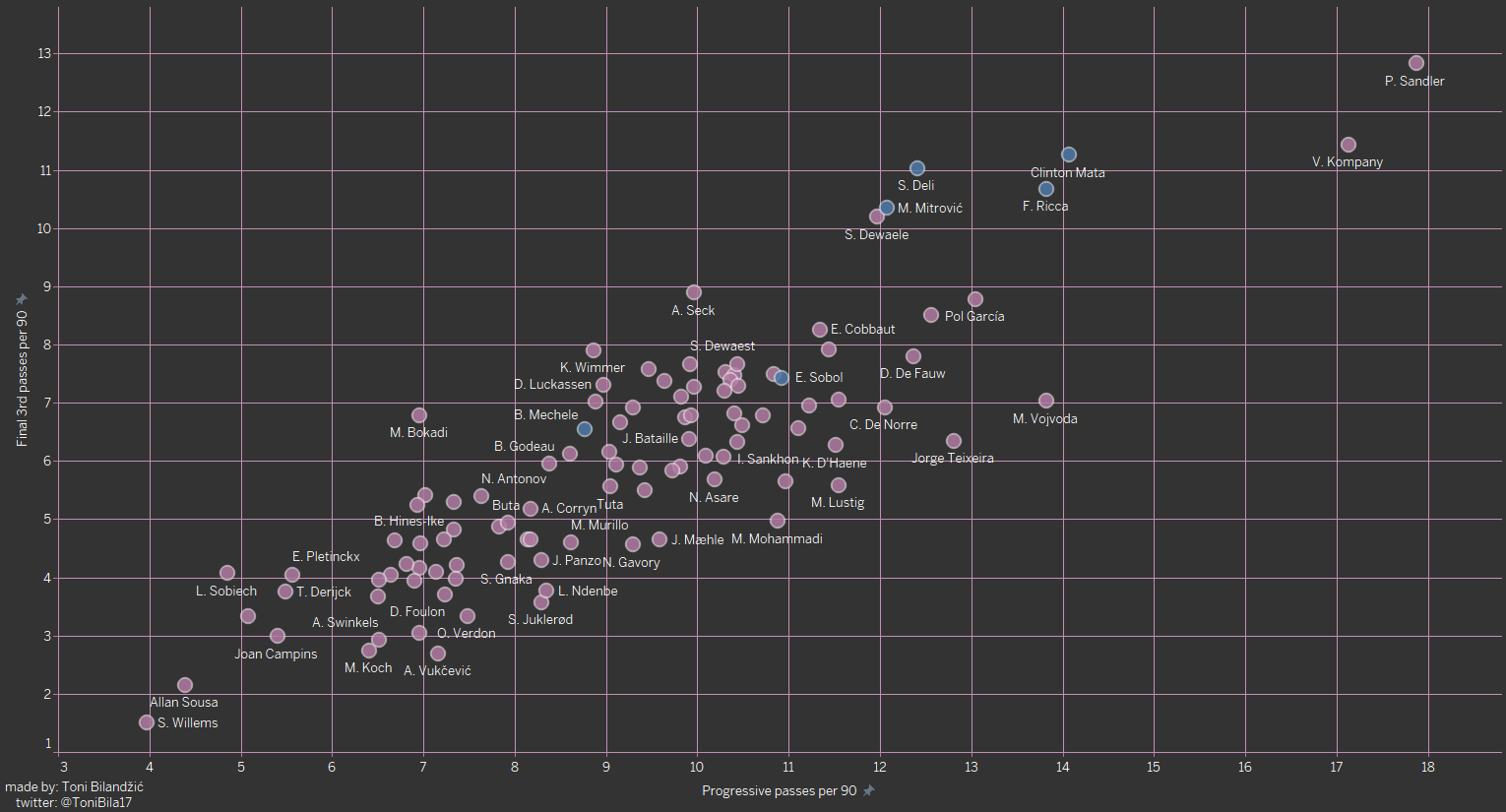 Some quite impressive numbers from Club Brugge’s defensive players. They really contribute a lot in the attacking phase. Not only that five out of six players play more than 10 progressive passes, but four out of six players are attempting more than 10 passes into the final third. Only Anderlecht’s ball-playing defenders Kompany and Sandler contribute more to build-up. When defenders contribute that much when in possession, we can only praise them and appreciate them.

We need to find out how offensive players convert these passes from defenders to dangerous killer balls into the penalty area. With deep completions per 90 and passes to penalty area per 90, we will get the picture of how creative Club Brugge players are compared to the others. 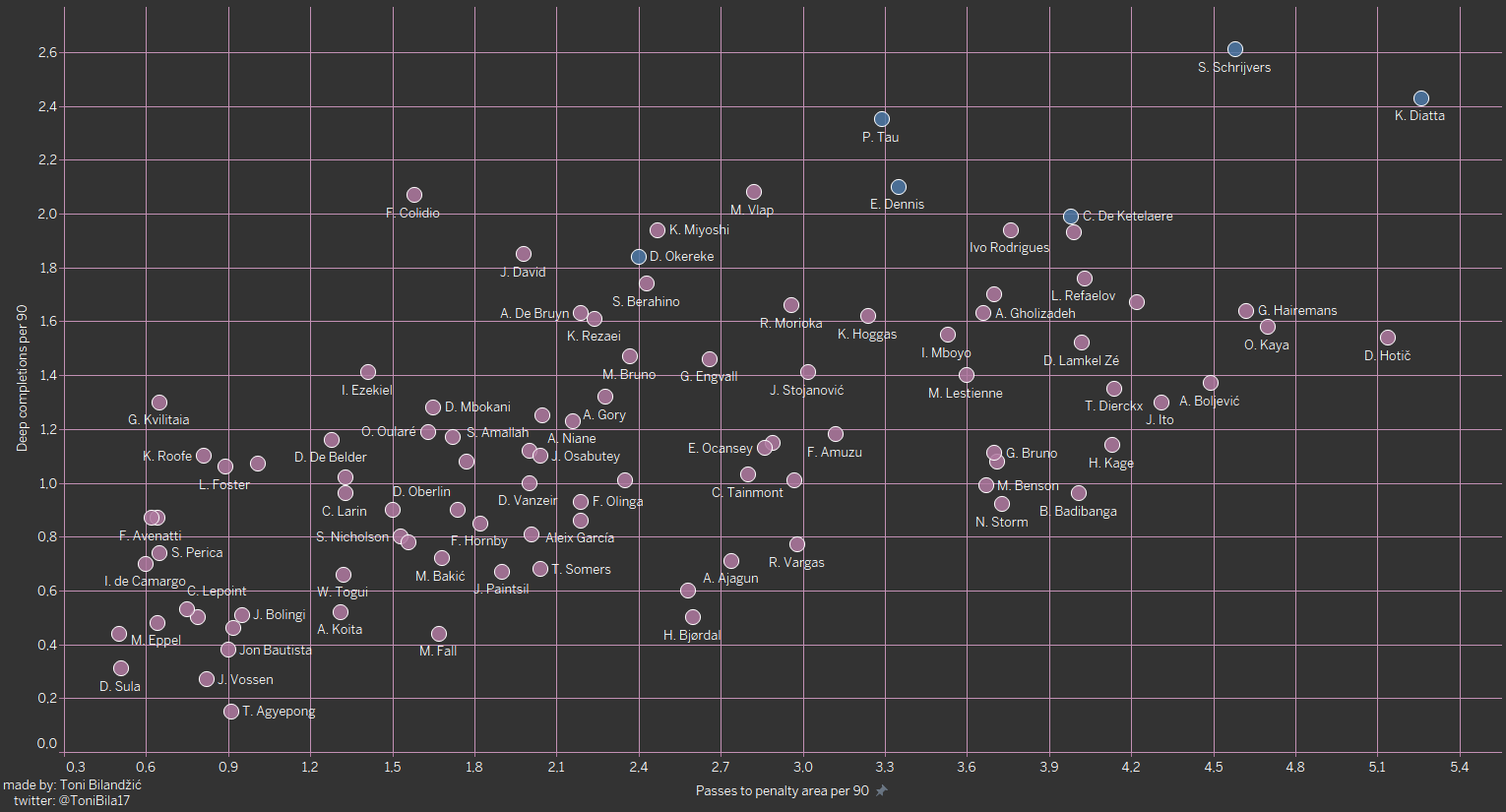 Once again, Club Brugge players occupy the best spot on the graph. Five out of six of their players completed two or more passes from the dangerous spots per 90. Five of them attempted three or more passes into the penalty area per 90.

The whole team contributes when in possession. Their defenders are finding gaps between the lines with their passes. The midfielders are very balanced and everyone has their task on the field. The attackers provide goals and assists while getting into the right spots on the field. The strength of this team when attacking is their fluidity and adaptability to the situations on the field.

An impossible task would be to single out just one player from this team. What makes this team special is their compactness when defending and their effectiveness while attacking. It is hard to find their weak spots based on their league statistics. In his first season as Club Brugge head coach Clement was able to implement his ideas successfully while getting the most out of his players.  . We can conclude that their dominance is a product of a few factors: versatile and quality players, the ability to alter formations based on opponent and head coach comprehension of his player’s capabilities.