It is hard to believe that Florian Wirtz of Bayer Leverkusen is only 18 years old. The midfielder was involved in 25 90s last season in the Bundesliga having made the step up from the U19 team only the season before.

The following visualisation highlights Florian Wirtz’s numbers from the 2020/21 season. Midfielders aged only 23 or under at the start of 2021/22 season were considered for this analysis. 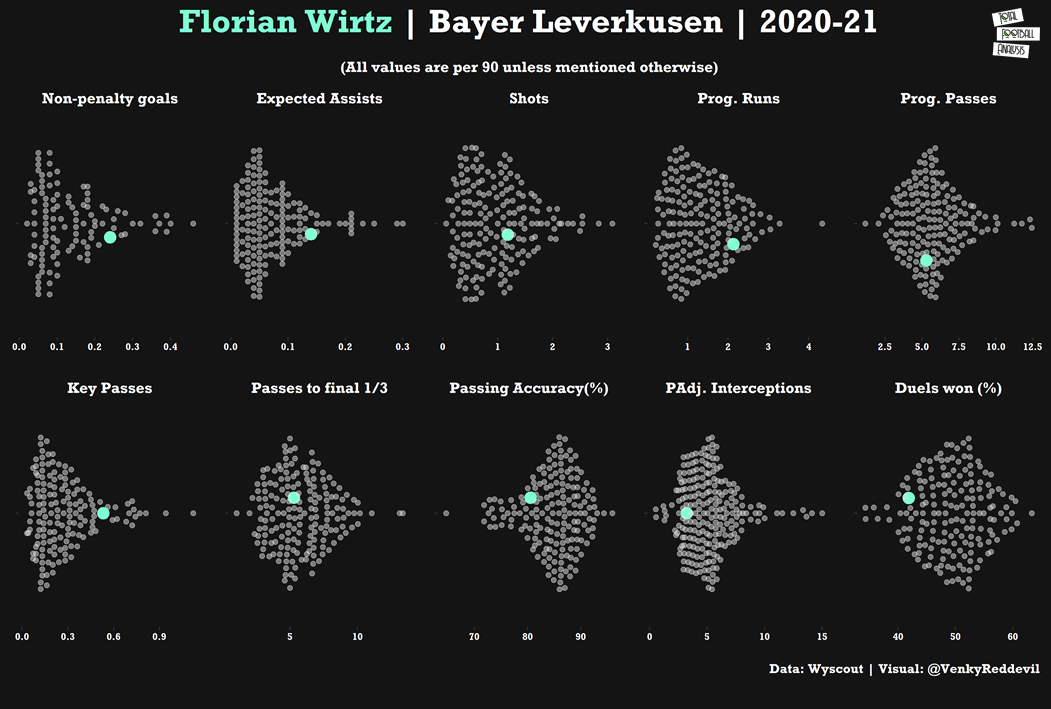 It was Wirtz’s first full season with the Leverkusen senior team and he played close to 2500 minutes which is quite impressive for an 18-year-old. Wirtz is an excellent creator. Only Dani Olmo had a better expected assists value than Florian Wirtz among midfielders aged 23 or under in the Bundesliga last season. Not just that, he also finished the season as the second-highest goal scorer for the U23 midfielders category with five goals to his name. The teenage midfielder is quite versatile in the fact that he can play as an attacking midfielder or slightly deeper as a right-sided midfielder. Florian Wirtz also ranks top 10 for key passes per 90.

Wirtz may need to improve on the defensive side of the game but given his role at Bayer Leverkusen, too much stock shouldn’t be placed on this aspect of his game. Florian Wirtz is only 18 years of age and has a long long way to go ahead of him but he has had an excellent start to his career and people’s eyes will surely be on him this coming season. It will be interesting to see if he can maintain his form from the 2020/21 season and if he becomes another gem that Bayer Leverkusen has produced.