To finish our data analysis series on the top-5 Asian leagues, we’ll present three U23 players who stood out in different statistics and deserve a closer look. You can check the previous pieces for the best players in Asia here:

We have chosen one player per line for further analysis: Erik Jorgens (defender), Atsuki Ito (midfielder) and Ayase Ueda (forward). We’ll look at their data and video and also provide their closest statistical match in the top-5 European leagues according to our bespoke xGOLD tool.

Ayase Ueda is a Japanese striker born in 1998 who currently plays for Kashima Antlers in the J1 League. Like many Japanese players, he started his football career in university football, playing for Hosei University. He made his professional debut for Kashima Antlers aged 20 years and 11 months in 2019.

Valued at €900,000 by Transfermarkt, he’s one of the most promising forwards in Asia at the moment. 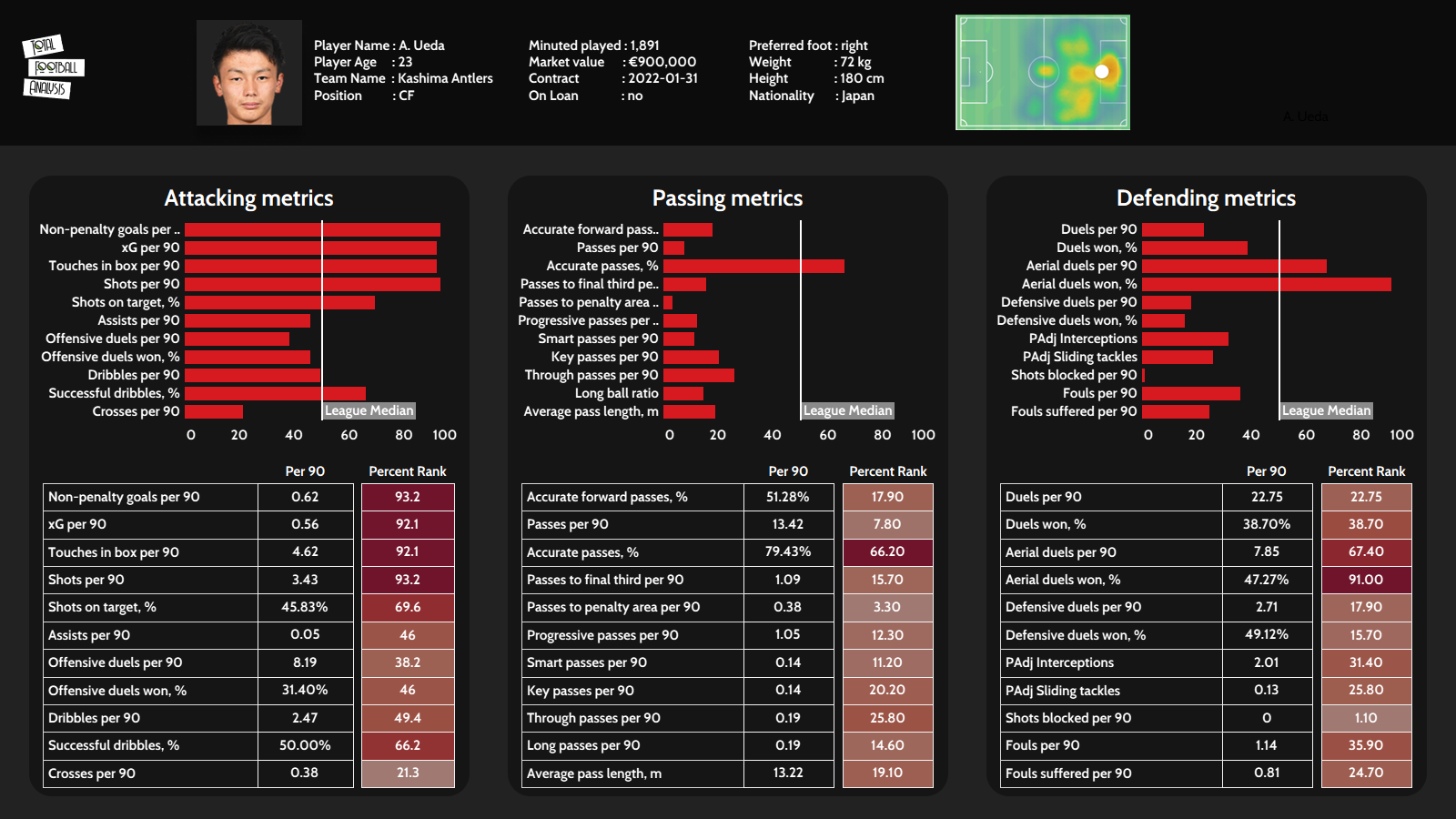 A clever striker, Ueda makes excellent runs in behind, finds spaces between rivals, creates space to receive the ball and is usually faster than centre-backs. He uses his body well to let the ball roll across him and leave defenders out of the play. Very lively and intelligent in the box, he creates separation to have some space to attack the ball, sweeps at the far post to score tap-ins, anticipates at the near post and is always ready to capitalize on any mistake or loose ball. He has a great jump, timing and heading technique. Ueda shoots very quickly as soon as he has the chance and can create space to do it with quick dribbles. His finishing is quite good as proven by him slightly overperforming his xG but still has room to improve, especially in 1v1 situations. His shots from outside the box aren’t especially good.

When he receives the ball wide after his runs in behind, he does well to put the ball in the box and into good positions. Sometimes he goes to the wings but not to play as a winger — just to create some space to make diagonal runs into the box. He can hold the ball and also get past rivals with pace if there’s some space. Ueda usually keeps his game outside of the box very simple, making sure he gives the ball to a teammate before returning to the box or attacking space.

Ueda is a very complete goalscorer who would be an excellent solution for teams struggling to translate their dominance into goals. He offers a wide range of movements, both with spaces and inside the box, can score with both feet and his head, so would fit in a team with a high crossing volume. The most statistically-similar player to Ueda in the top-5 European leagues, according to our xGOLD tool, is none other than Borussia Dortmund‘s Erling Braut Haaland — the world’s most valuable player at the moment — with a similarity of 84%. Anyone looking for an affordable striker who can become an elite one should definitely look at the Kashima Antlers man.

Erik Jorgens is a Brazilian left-back born in 2001 who currently plays for Al Ain FC in the United Arab Emirates Pro League. The only non-Asian player on our list, Erik came through Internacional’s academy in Brazil, becoming U20 champion with his club and even playing 2 games with the first team, but in 2020, aged 19, he moved to the UAE.

Since he arrived at Al Ain, he has become one of the best full-backs in the country, playing 37 games in all competitions and providing 6 assists. Transfermarkt already value him at €550,000, which is pretty high for a young player in his league, and it looks like he’s getting valuable playing time there while readying himself for his step to Europe or the MLS. 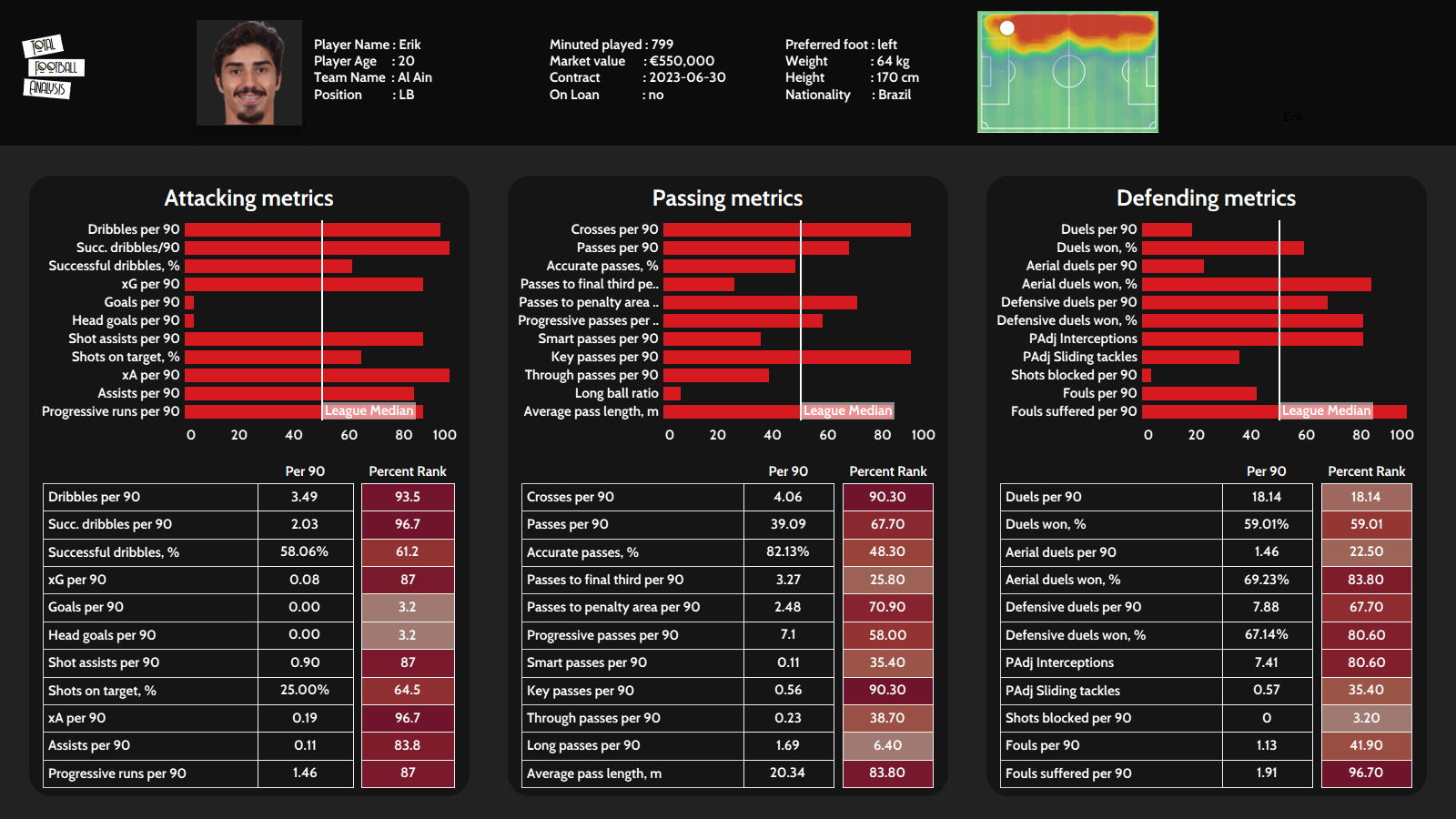 A fast and direct left-back, Erik often starts quite deep to help his team in the build-up and use his talent to combine out of pressure and get forward. Once on the ball, he can carry it at a very good speed and with his head up to choose the best passing option and also make runs off the ball to receive deep passes. He likes to come inside and play in central areas too and has the quality to do it.

We see his excellent technique in his dribbles and combinations, showing what we expect from a Brazilian full-back. He’s very creative and skilled in 1v1, and with his afro hair and ability on the ball, he vaguely reminds us of Real Madrid’s Marcelo. Not afraid of attempting difficult dribbles like elásticos, stepovers and the like, he’s always a source of spectacle and a joy to watch. He receives a lot of fouls (1.91 per 90), often out of frustration.

In defence, he’s intense and doesn’t let rivals think, which results in his high success rate in defensive duels despite not being tall (1.76m). The same goes for aerial duels, where he has a good jump but especially a lot of determination. He’s very quick to get back to his position in defensive transitions and covers the whole wing effectively.

With his contract running until June 2023, this summer could be Al Ain’s last opportunity to sell the talented full-back. Coming from a football culture that has a presence in all the countries in the world, the adaptation shouldn’t be an issue for Erik and he would be a very interesting target for clubs looking at unusual markets to buy young players.

Liverpool‘s Andy Robertson with an 88% similarity is among the top matches for Erik on xGOLD, which gives us a clear picture of the kind of full-back he is. At his young age and despite his unconventional career path, he has plenty of time to reach the highest level.

Atsuki Ito is a Japanese defensive midfielder born in 1998 who currently plays for Urawa Red Diamonds in the J1 League. Born in Urawa and a product of Urawa Reds’ academy, he left the club to go to Ryutsu Keizai University before returning to his childhood club. Since his first-team debut aged 22, he has played 51 games in all competitions (1 goal and 3 assists).

Transfermarkt value him at €300,000 and while he has never been part of any national team, his data suggests he deserves a chance soon. 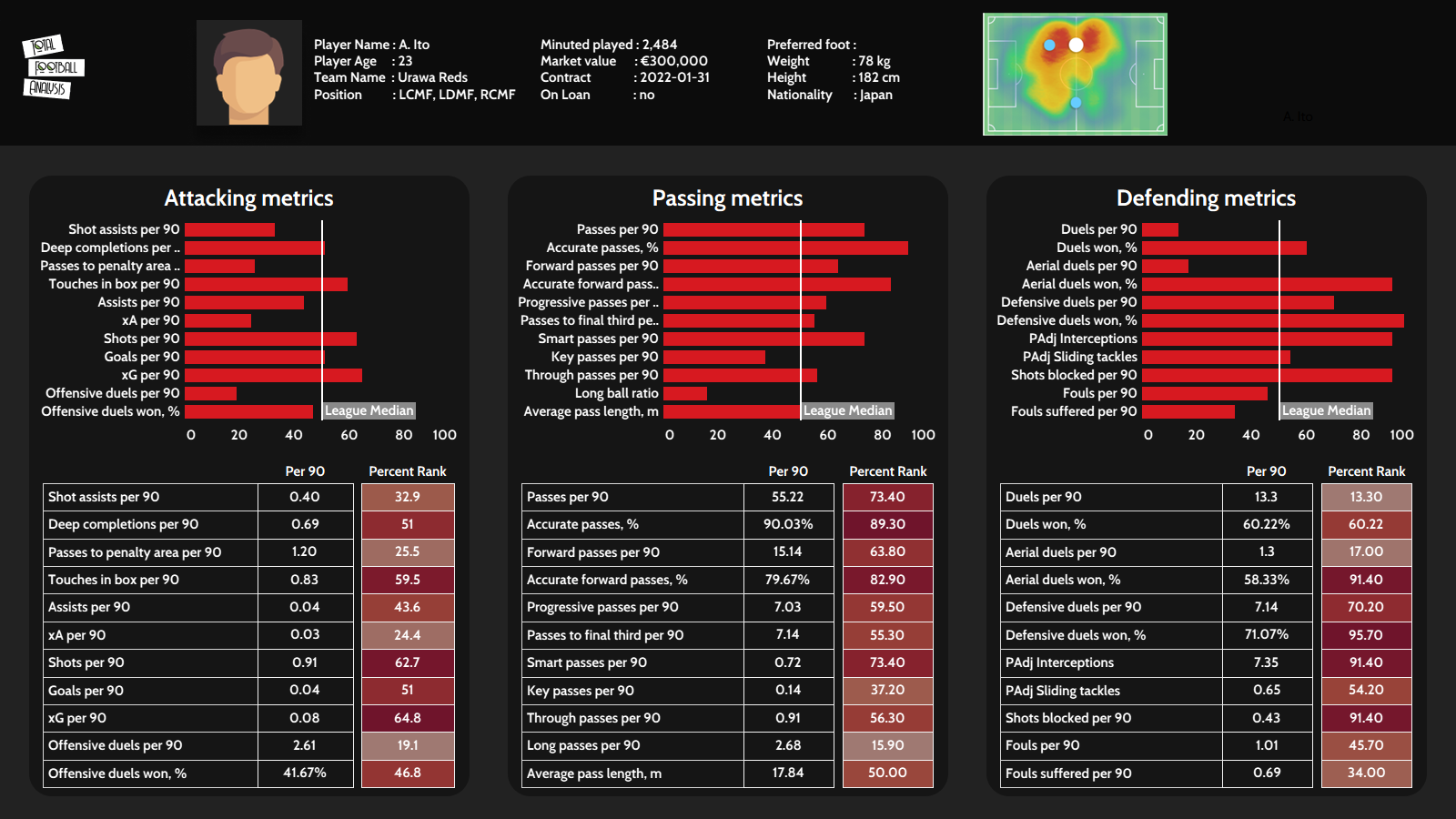 The first thing that stands out in Ito’s data is his defensive contribution. He gets into a lot of defensive duels (7.14 per 90) and wins a majority of them (71.07%). He does very well both in a high and low block and that translates into his outstanding 7.35 possession-adjusted interceptions and 0.43 shots blocked per 90. He’s also very good in the air, winning 58.33% of his aerials.

On the ball, he’s a very safe passer with a 90.03% passing accuracy but has the quality to break lines (7.03 progressive passes per 90) and get the ball into advanced positions (7.14 passes to the final third per 90). He also has the energy to venture forward and his 0.83 touches in the box, 0.91 shots and 0.08 xG per 90 are very good for a defensive midfielder.

Ito is an excellent defensive player. He’s always very focused to anticipate and block passing lanes, agile and quick to react, and very intense in duels. He does great in pressing and helps his team a lot when defending in a high line as he forces rivals to play backwards. When his team defends in a low block, he takes good positions in the box and does well to defend crosses.

Dynamic in all phases of the game, he covers a lot of ground, gets into lots of defensive duels and also makes forward runs to get into the box. Ito does especially well in transitions, both when he recovers the ball and has space to run forward and when he has to track back and disrupt a rival counterattack. His energy and attitude make him a great presence in midfield.

His technique is very good, while he can play quickly and accurately, combine in tight spaces and break lines with his passing. He makes very good decisions on the ball, has good awareness of what’s around him and always chooses the right option at the right moment. His movements are also very good, trying to get on the ball very often but also making runs from midfield and getting into good scoring positions when he sees the chance.

PSG’s Idrissa Gana Gueye is Ito’s closest match on xGOLD with a similarity of 91%. Both are primarily defensive midfielders who do better on the ball than it might seem at first sight. There’s a feeling of Ito being everywhere in defence that resembles Gueye a lot too. Commanding and reliable, he’s someone who should play at a higher level very soon.