Football is a game where the same player can evoke different kinds of reactions from fans and Martial certainly fits the bill for such a personality.

While some have often criticised the player for his attitude and unwillingness to put in a “shift” others have pointed out his insane ability to finish and have often blamed injuries and bad coaching for inconsistencies in performances. 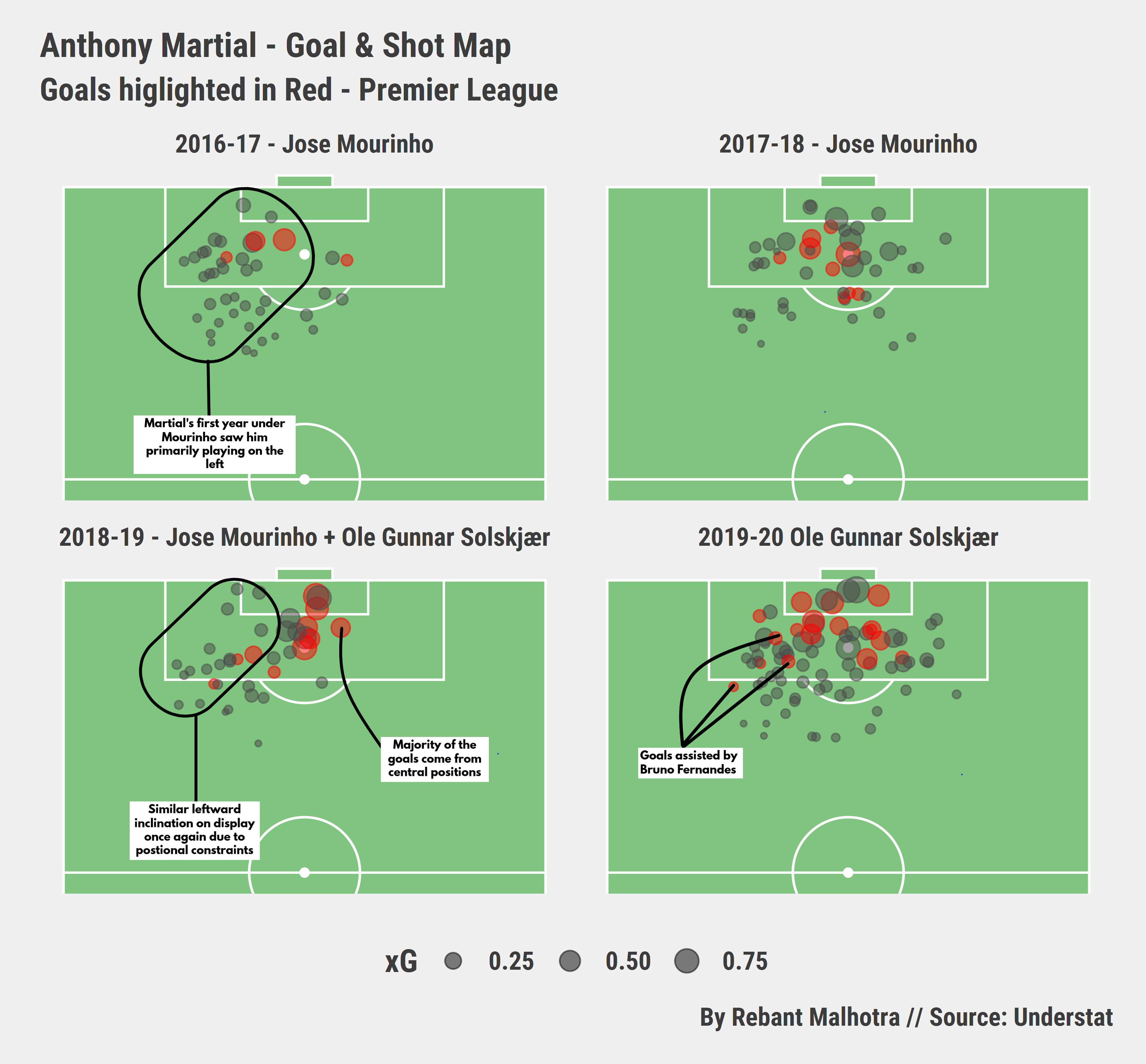 Journey through his past seasons

Martial’s big-money move to Manchester United was met with doubt back in 2015 as not many were convinced that he was worth the high transfer value. However, the young Frenchman got off to a flying start with a debut goal against arch-rivals Liverpool, with a Henry-Esque finish as they won the fixture 3-1.

While this followed a season where Martial played over 2500 minutes in the league alone (his personal highest till 2018-19), things soon fell apart for him.

Many had predicted that the entry of Jose Mourinho would not bode too well for Martial. The Portuguese is known as a manager who expects a certain level of commitment and work rate from his players and Martial’s body language often seemed to indicate the opposite.

The player had limited minutes to his name under Mourinho, due to his constant injuries and lack of equation with the manager. It was clear that all was not well between the duo after Mourinho publicly passed a question on Martial to United’s press officer refusing to answer when the youngster would return to training.

Martial was indeed quite close to a move out from Manchester United and Ivan Perisic was billed to replace him, however, the move never happened.

However, things took a different turn altogether after the appointment of Ole Gunnar Solskjær. The former United player now manager showed immense faith in the player and the returns started to come. With a change in position and atmosphere, Martial had a great season in 2019/20 as he scored 17 goals in last year’s league campaign. The addition of Bruno Fernandes only further strengthened his performances with the much-needed creativity added to Manchester United who were clearly struggling without it.

Although Martial played his highest minutes in the league last season, this came despite the fact that he missed 56 days of playing time due to a hamstring injury early on in the season. However, after coming back from that particular injury, he never looked back and was completely a mainstay in the squad.

As a new season approaches us, especially one with a minimal pre-season, it will be interesting to see whether Martial continues his form to the next season. The presence of Marcus Rashford will also be crucial to Martial who often interchanges positions with him in between matches. The pace that the duo brings to the table will be integral to Man United’s attack if they want to challenge for top 4 once again or have an outside chance at winning the league.

With a 5 year contract under a manager who has continued to trust his abilities coupled with the fact that Manchester United seem to be building a strong offensive foundation points to a simple conclusion.

This season could very well be Martial’s breakout season to finally touch the much elusive 20 league goal count.