Juventus have been crowned Serie A champions for the ninth year in a row even in what is said to be their worst season in years, having their worst defensive record of 43 conceded goals. Now that the longest season in history is over, they are in pursuit of another achievement winning the UEFA Champions League title.

Their second leg in the Round of 16 against Lyon is expected to be an intense one, after a disappointing premature ending of the Ligue 1 season that left Lyon in the seventh place, out of the European spots and motivated to earn their ticket to the European competitions in another way.

While being a disappointing outcome, this could be taken as an advantage, compared to the Italians’ extremely busy schedule that saw them play two games per week over the last couple of months.

Juventus have a lot to prove, especially being 0-1 down after their first meeting. They have been split between all the competitions in the last few years, which has affected their performance in Europe, but now they will be able to focus on their most desired silverware.

This preview in the form of tactical analysis will try to examine what their possible tactics could be and how they could expose each other in pursuit of the next round.

In the first leg, Lyon were much more efficient and precise in their attacking actions, taking advantage of their opportunities, which allowed them to expose Juventus’ defence and get the win. In this analysis, we will explain what precautions should the Binaconerri take in order not to fall victim to their defensive fragilities again.

How Lyon could block Juventus’ efforts

The most obvious task that Lyon’s defenders are going to have is to cover Juventus’ attackers tightly and not allow them space to exploit. Even though Lyon have been considerably solid defensively, they do need to overcommit to their central areas in order to stop Cristiano Ronaldo and/or Dybala in their dribbling and movement off the ball as well.

Although the French team haven’t been very efficient in defending attack down the wings, blocking the central passing lanes and forcing Juventus out wide might be a smart strategy. Most of Juve’s key passes come from central positions, while they underperform on the wings and don’t have real attacking threat coming from out there, which will make it easier for Lyon to cope with the actions in theirs defensive third and limit the opposition’s opportunities in front of the goal.

Very few of Juventus’ crosses are accurate, especially on the right, where they have been using Juan Cuadrado as a right full-back which is not allowing him to be consistent upfront.

Since Juve’s attackers often drop back towards the central line to pick up the ball employing a mid-block could help Lyon in closing them out early on in their build-up and applying pressure in midfield. They should always be ready to switch to a low block in case Juventus manage to progress the ball. This way they will limit the spaces and decrease the chances of penetration.

Since Lyon’s actions in the box are often unmeasured, they need to focus on their marking strategy and be very precise in it, since the opposition will be looking to exploit them. They also need to have good coverage in the half-spaces when defending corners, since Juve could take advantage of every given opportunity and have worked out a winning strategy when it comes to attacking set-pieces. They have scored 14 goals from set-pieces in Serie A in the 2019/20 season.

While blocking the passing lanes Lyon shouldn’t always let them to go out wide but should be aware of the Bianconerri’s long-shot abilities. They wouldn’t hesitate to shoot from distance and catch the opposition by surprise even when the defence is well-structured.

How Lyon could expose Juventus

Lyon’s attacking strengths hide on their right flank and focusing on their actions out there could lead to a lot of chances. Juventus are having some struggles defending on the left, mainly due to Alex Sandro’s dropped form and inability to fulfill his defensive responsibilities.

Firstly, Lyon’s build-up could be easier should they try to build-up through the right flank, since Juve are unlikely to recover the ball in these areas as frequently as they do it on the other side. The lack of pressing out there could help the French in reaching the central line quickly and then force the defenders into individual duels.

Forcing Juve into defensive duels on the left, especially deeper in their own third could be beneficial for the Kids since most of their lost duels in these areas have resulted in an opposition shot. And just to be even more convincing, adding Lyon’s strong crossing performance from the right, they could really take advantage and penetrate.

That doesn’t mean they could be dangerous only on the right though. The French club could also threaten the goal during attacking corners from the left. Many of their key passes have come from these opportunities and it might be a focal point against Juventus too, combined with their drop in the aerial performance.

Employing the abovementioned mid-block could also help the team to win the ball in midfield and exposing the Serie A champions on a counter. Having in mind Juve’s defensive vulnerability and miscommunication between midfield and defence and Lyon’s strong performance on a counter, this could be Lyon’s chance to breakthrough.

How Juventus could avoid defensive mistakes

Juventus need to overcommit players to defend on the left since this turns out to be their weakest spot, which would work perfectly for their opponents. They need to make sure Sandro has some support whenever needed and that the spaces between the lines are limited.

When it comes to the other side, Lyon have quite solid players who tend to dribble a lot, which means that Juventus should increase their awareness and constantly press their opponents in order to stop them from reaching the box.

Even when successfully gaining back possession, Juve’s defenders should be aware of Lyon’s constant efforts to recover the ball in the advanced areas. Since the Italians’ backline occasionally has too much space between the players, it makes it harder to close it out should they lose the ball in their defensive third.

Although Juventus haven’t conceded many goals from set-pieces in 2019/20 they need to be overprotective when defending these against Lyon, mainly because of their decreased aerial performance and Lyon’s strong aerial presence.

Juventus have conceded most goals and most quality chances in the last 15 minutes of their games. The chances of this to happen again are high since Lyon constantly rotate their starting XI and there’s a possibility of having some difference-makers on the bench that could change the outcome in the final minutes of the game.

The chances of Juventus falling into their own defensive trap are high. They need to balance out their performance during defensive transitions and focus on precise actions since Lyon will try to expose them in different ways.

Meanwhile, the French team’s defensive structure and positioning should also be well-measured in order to limit Juve’s options in the central areas and block their creativity.

Juventus need to take advantage of their countless opportunities, otherwise, they risk to get outwitted again and experience another heartbreak. 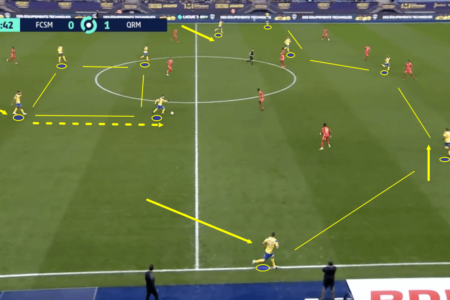 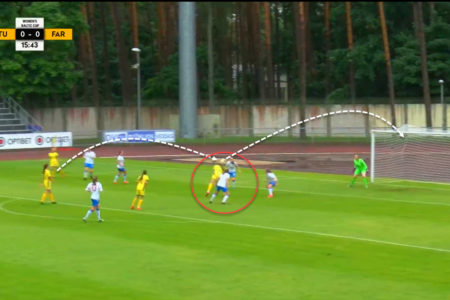 Following the departure of Natasha Dowie at the end of last season, Milan Women found themselves relying solely on Valentina […]