RCD Espanyol is just down from La Liga this season and their rival Mallorca also suffers from the delegation last season. They meet again here in Segunda Division and are both striking for promotion this season.

In this tactical analysis, we’ll examine the tactics of RCD Espanyol and Mallorca. In this analysis, we shall delve into the style of play for these two teams. 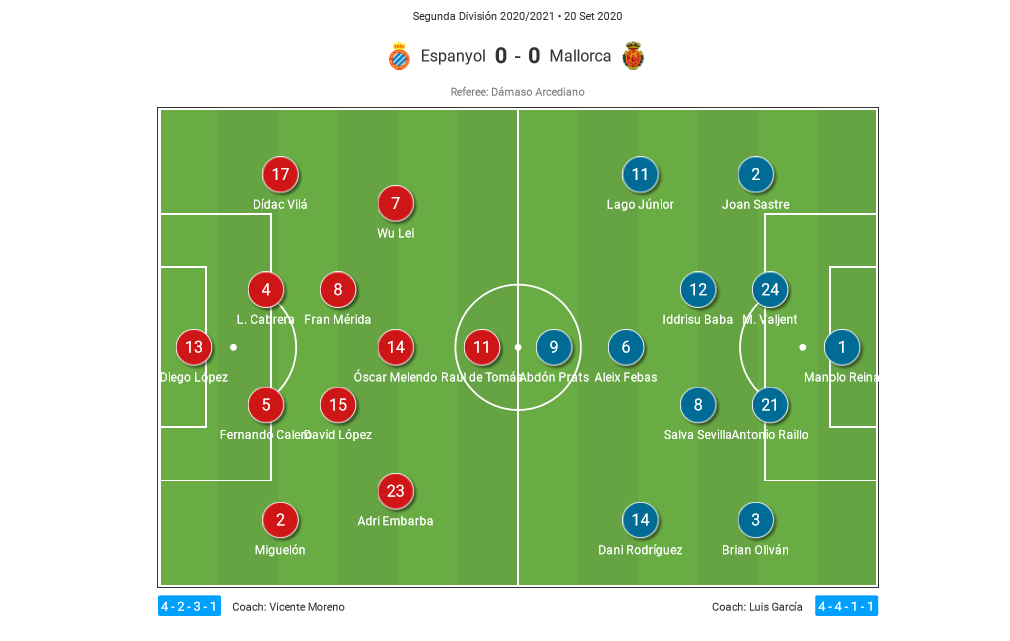 Firstly, in the playing out from the back, a full-back would drop to create a three-in-the-back asymmetrical structure while the other full-back would push higher to the midfield early. This is to create the numeral superiority in the first line as they encountered the 4-2 pressing shape of Mallorca. Furthermore, two pivots would be deployed behind the first pressing line of Mallorca, but one would stay closer to the three-back line to act as the role of number six. That would normally be López and he was the target player to find and the trigger for the play to go into the next stage.

In order to find López to successfully break the first pressing line, Espanyol’s attacking midfielder Melendo would constantly drop in front of the opponent’s midfield line to help get the ball to López’s feet. 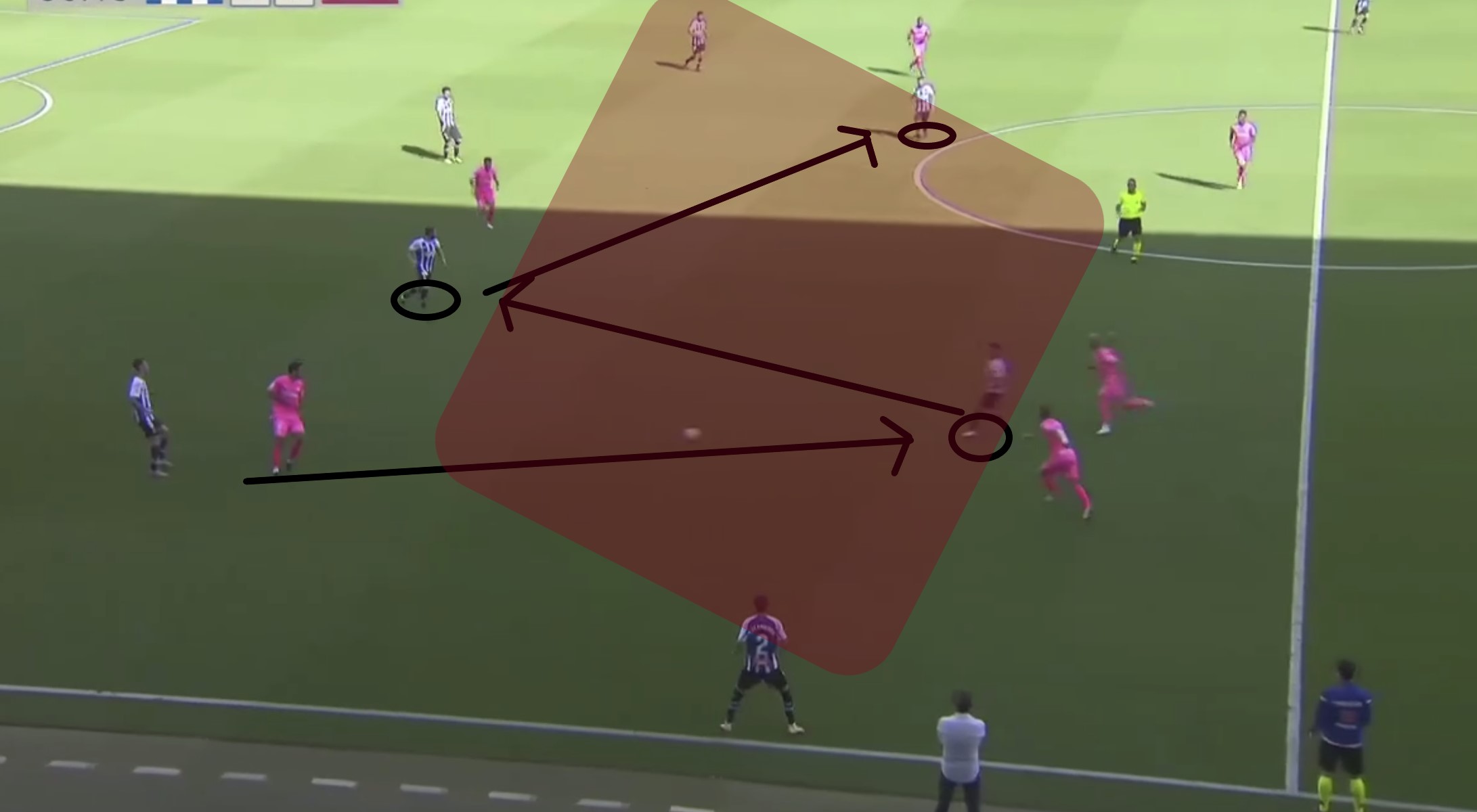 As the opponent pressed Calero, Melendo began to drop to the midfield. His well-timed run into the front of the opponent’s midfield line helped him successfully play a one-touch pass to find López. The first pressing line was successfully bypassed with López facing forwards with no pressure. Then López could pick his teammate on the left to start the next stage in attack- connecting lines, and that’s the “up-back-up” in the playing out from the back stage.

With the role number six player getting the ball, he would find the role number eight player, which was normally Mérida. Mérida would position himself a bit higher than López in front of the opponent’s midfield line, with the duty of creating chances for the final passes. This was supported by the inverted winger Wu Lei or one of the front four attackers. As the winger went inverted, the flank was cleared for the full-back to run onto as another passing option.

The example for this was the follow-up of the playing out from the back scenario above. As we mentioned that López picked Mérida, that’s the trigger for de Tomás to move into the half-flank, leaving the flank for the full-back Vilá to run onto. These off-the-ball movements gave Mérida more options to hit the attacking pass to create chances for final passes.

Then Mérida picked de Tomás. He received between the lines and ready to make the play into the final stages. On the non-ball side, Embarba also served as the inverted winger on the half-flank, leaving the outside for the right-back Miguelón. As de Tomás managed to have the vision on the right flank, Miguelón began to accelerate into the final third, receiving the switching pass and ready to hit the final pass.

Espanyol’s final stages in the attack

Unlike their first two stages in the attack, Espanyol’s final passes were not of good quality, which created poor finishing chances. They couldn’t pass accurately in final stages even when they were unpressed. On top of this, the front-four was not able to release any key passes into the box and created a direct finishing chance. They were more likely to play onto the flank as the resort to create a final pass that decreased the level of danger for the opponent.

From the above image, we can see that the front-four were in the final stages of the attack. Melendo was on the ball and Wu Lei was running onto space behind the defensive line, providing a final pass option. However, Melendo took his touch outside and it seemed that he lacked the confidence in giving the penetrative final pass. He picked the player on his left and missed the opportunity to directly give a final pass.

While the quality and the way of giving the final pass was a huge problem for Espanyol, Vincente Moreno managed to turn this around by using different offensive personnel after 53 minutes. He had Marc Roca on the pitch, who could directly give a long penetrative pass to create finishing chances. Also, players like Matías Vargas could cut inside and create finishing chances on the half-flank. Wu Lei couldn’t do things like this. With the new type of players on the pitch, the quality of the final pass improved.

Above is an example with new offensive players on the pitch. Vargas succeeded in cutting in in zone 14. He faced forwards and the full-back was diagonally running into the box. Then Vargas gave a penetrative pass that created a finishing chance, though it was not accurate.

The way the created finishing chances altered and they created more threat than before. Nevertheless, Roca managed to get his second yellow card at 83 minutes. Espanyol was not able to create threat continuously then.

Espanyol was not facing many problems in the first stages of the attack, and part of it was due to the pressing shape Mallorca employed. Mallorca utilised a flat 4-2 pressing shape instead of a 4-1-1 shape that had one more layer. With the first two-man, Mallorca managed to force Espanyol’s back-three to one side with the first presser. The other player stayed horizontally to prevent switching to the weak side. However, this means that the pivot was unmarked. With a front player dropping to set the ball back to pivot, the flat two-man pressing line was easily bypassed, while with a 1-1 shape the pivot was tracked and not easy to be picked.

Apart from the pressing tactics, the distance between lines and doubling-up to help from the bypassed line were poor. The example above also manifested the gap between lines was huge and therefore, it was difficult for the front-two to help the midfield players as it was far to chase. And this would leave the target player López with no pressure on his back. He was then free to dictate the play.

When the distance was not that far, the front-two player would recover back to help, but in a wrong manner with bad reading of the game.

The image above manifested their wrong recovery run. As the “up-back-up” patterns appeared many times, they were supposed to read the play and to cut off the passing lane to López. However, Prats’s running trajectory was towards the outside, as shown in the image. This was meaningless and once again left the pivot López free.

As Espanyol’s full-backs pushed high in attack, there was a lot of space to utilise behind them in offensive transition. That’s where Mallorca deployed fast players like Lago to gain advantage in the counter. Lago could use his dribbling technique to make the progressive runs upfront, bring the play forwards.

Above is an illustration of this. Lago had the ball in offensive transition, and there was plenty of space behind Espanyol left-back Vilá. Then Lago utilised his pace and dribble to beat Vilá and progressed into the space.

On top of this, Espanyol’s pivots didn’t understand their respective role in pressing as they would press up together, leaving the space in front of the defensive line open. Mallorca’s pivot Baba recognised this and would make a diagonal run behind them to receive in the channel. Just as the image shown below:

López and Mérida went for the double pressing in this scenario, leaving the space behind them open. Baba recognised this and made diagonal run in behind the Espanyol pivots. He then latched onto the ball facing forwards, creating problems for Espanyol’s defensive line for whether to drop or press.

If both teams wish to be promoted to Li Liga to compete with teams like Real Madrid and Barcelona, or to play in the UEFA Champions League in the future, they still have a lot to work on. Those unforced errors and meaningless errant passes should be avoided, and tactics should be modified according to different opponents.