SuperDraft 2021: The 3 college soccer prodigy picks who could dominate MLS

Last Thursday (January 21, 2021) the MLS conducted the 22nd edition of the SuperDraft. The 27 teams in the league took turns to pick the best players in college soccer, looking to secure the next generation of top soccer players for their roasters. With clubs from all around the world, and especially from the Bundesliga, scouting more and more in the USA, the MLS SuperDraft is becoming a more and more important event in football.

The first picks are assigned to new teams and then to teams who didn’t make the playoffs. Austin FC were granted the first pick as they will start competing in the MLS 2021. The second pick corresponded to Cincinnati, who finished the MLS 2020 in the 26th overall position. The third pick was originally assigned to Houston Dynamo, who finished 25t in the overall classification but Colorado Rapids (10th in the MLS 2020) acquired this selection in exchange for $200,000 in general allocation money and the 6th overall draft pick.

In this analysis, we’ll provide short scout reports on the top three picks of the 2021 MLS SuperDraft: Daniel Pereira, Calvin Harris and Philip Mayaka. The top three picks come from the Atlantic Coast Conference of the NCAA and none of them was American.

Each scout report includes a tactical analysis and a statistical profile. Data has been taken from Wyscout and our player profiles show metrics in terms of percentiles, which reflect the player’s performance on that particular stat in comparison with the rest of the players in the same position in the Atlantic Coast Conference. 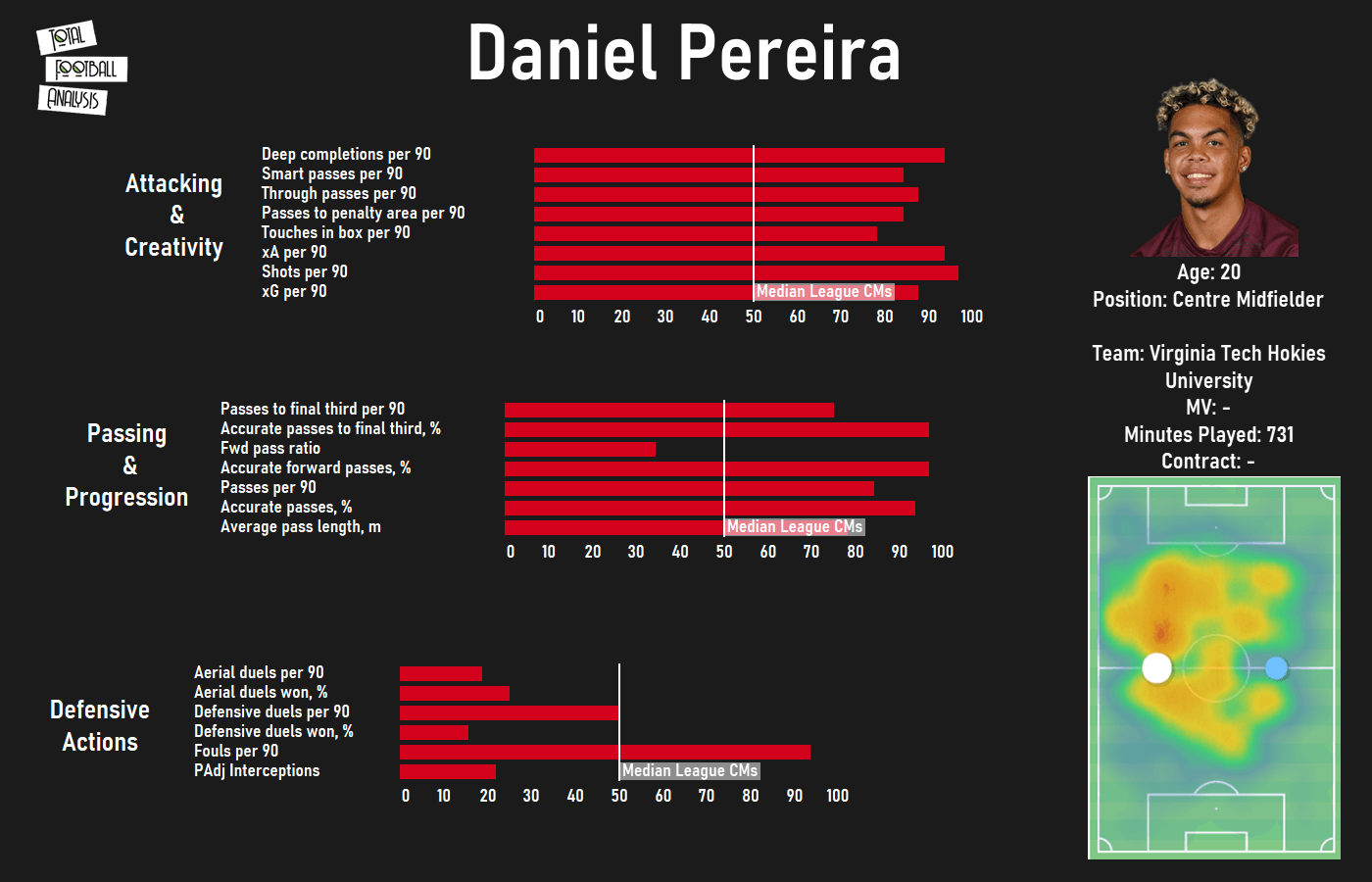 Daniel Pereira is a Venezuelan midfielder who represented his country at U14 and U17 levels before joining Virginia Tech Hokies to play college soccer. In his two seasons in the NCAA, he played 26 games, scored six goals and assisted another six. He’s the first-ever South American and first Virginia Tech player to be selected first overall in the MLS Draft.

Pereira is right-footed but uses his left foot too. He’s quite short (175 cm / 5’9’’) but uses his low centre of gravity to protect the ball and win offensive duels. He’s also agile, changes direction easily and can move quickly in tight spaces.

The Venezuelan plays mostly as a central midfielder with an attacking role, usually starting on the left of a three in midfield but he can also play on the right or as an attacking midfielder. Pereira is very mobile and likes to participate in every phase of the game, usually moving to be near the ball. He can come deep to take the ball from the defenders but also drift wide or also move between the lines to create passing lanes and help his team progress. He gets involved in most of his team’s attacking moves as shown by the high number of passes he makes per 90, which is in the top 20% among midfielders in the league.

Austin will get a player with a very good technique who always has the ball close to his feet and uses both feet to control, pass and shoot. Pereira is composed and very aware of his surroundings. He usually finds a way out of pressure with short passes or dribbles even in small pockets of space, usually choosing good options and moving the ball forward or to less crowded areas of the pitch. Thanks to his great vision, he’s in the top 20% of the league in almost every imaginable chance-creating and creativity metrics. His passing range is also very good, meaning he can switch play with few touches and set the tempo of the attacks combining short and long passes using both feet. He also has the pace and skill set to break lines both with passes and carries.

Interestingly, Pereira isn’t only a playmaker. He usually reaches good positions in and around the box with late runs and smart movements to find free spaces. He likes to try his luck with both feet from the edge of the box which is why he¡s in the top 5% of the central midfielders with the most shots per 90 and also one of the best in xG per 90. His delivery from set-pieces is also good if inconsistent at some points.

On the defensive side, Pereira doesn’t work a lot or has a lot of responsibility in his team’s tactics as there are other midfielders in charge of recovering the ball, leaving him free to initiate transitions. Anyway, he would benefit from being more active in pressing, especially right after losing the ball, because he would get the ball in a more advanced position and with rivals out of position. In the MLS he will surely need more defensive work.

In his first months in the MLS, Pereira will probably be used as a 10 or coming inside from the left until he fully adapts to senior football. He has the quality and physical conditions to succeed in his position and should be a great pick for Austin FC if they can develop and coach him right. 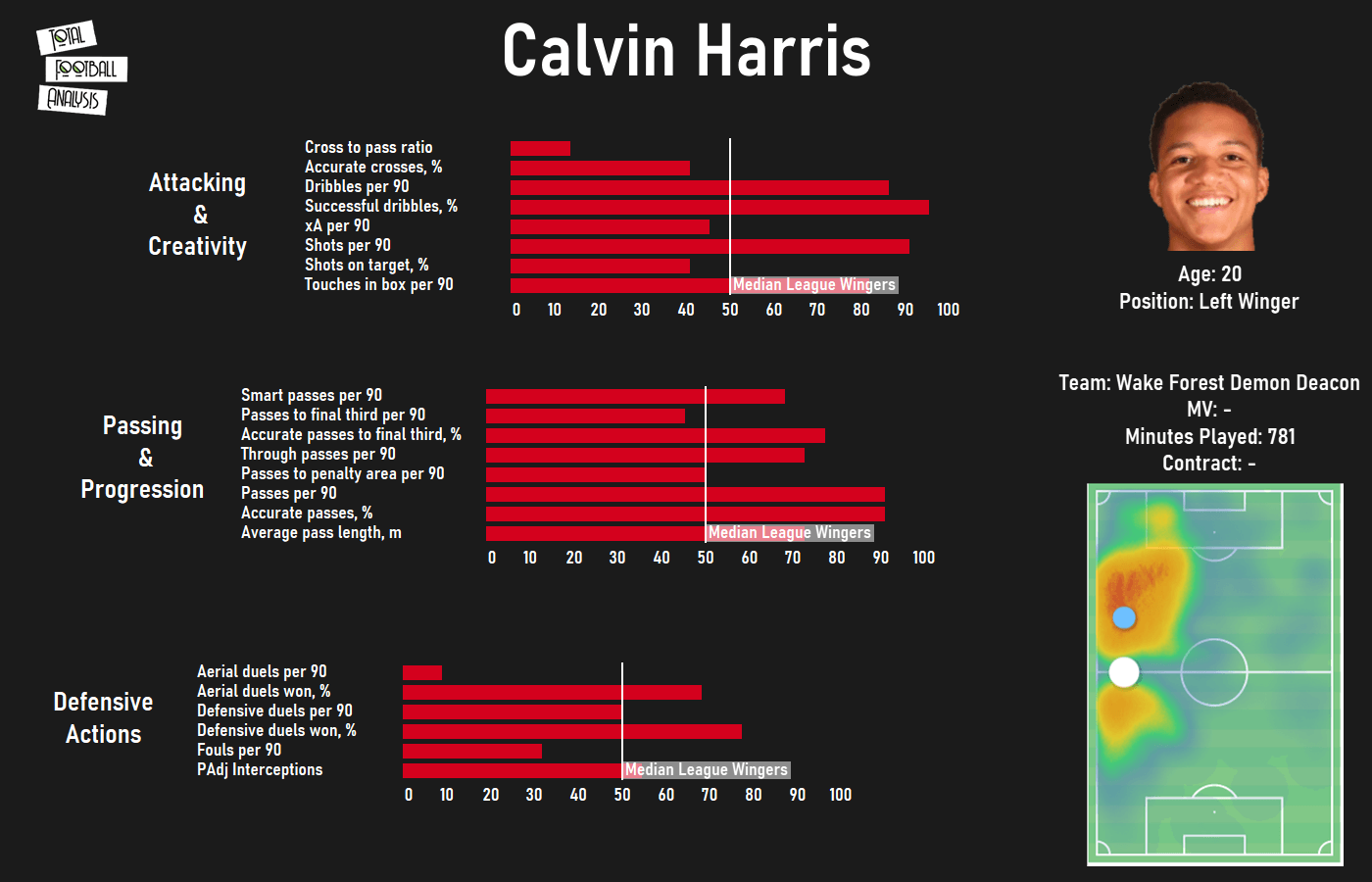 Calvin Harris is an English forward with a very international background. He was born in Middlesbrough, son of the former Sheffield United player Terry Harris. He moved to Hong Kong when he was very young but started his football career in New Zealand with Wellington Phoenix, playing six games with the reserve team in the New Zealand Premiership and scoring two goals before enrolling in Wake Forest University. In his two seasons in the NCAA with the Wake Forest Demon Deacons, Harris has played 32 games, scoring 10 goals and assisting five.

Harris is right-footed but comfortable with his left. He’s tall for his positions standing at 183 cm / 6’0’’. He’s also very pacey and powerful, basing most of his game on his physicality both in attack and defence. He’s a player who wins most duels and races, especially until now against players his age.

The Englishman usually plays as a left-winger but can also be used on the right side. As his team’s attacks advance, he gets more central, playing almost as a second striker at times and getting into the box very often. He makes good runs in behind and between the full-back and the centre-back looking to exploit his pace. A play he repeats a lot consists of receiving on the left side, cutting inside, switching the play and rushing into the box.

His technique is good but not excellent, but enough to use his pace and power to dribble. He usually makes good decisions regarding when and where to dribble, so his success rate is high. His passing is quite simple, looking to give the ball to a close teammate or switch play when there are spaces on the right side and then run into the box or into space afterwards.

When he’s around the box, he looks to cut inside, win a yard and shoot from distance. He shoots a lot but his shots aren’t very accurate because of the positions he takes them from. A good proportion of Harris’ goals come from very powerful shots from medium range using both feet, so it’s understandable he takes lots of them. His vision to assist is not excellent but he does put his crosses into dangerous positions. Anyway, he’s still far from being a creative winger.

Harris is a quite simple but effective winger. He’s intelligent in his positioning, knows when to risk and takes advantage of his great physical qualities. He has also shown glimpses of great shooting ability. There’s the question mark on whether he will translate that into the senior game but if he does he will be a very valuable asset for Cincinnati. 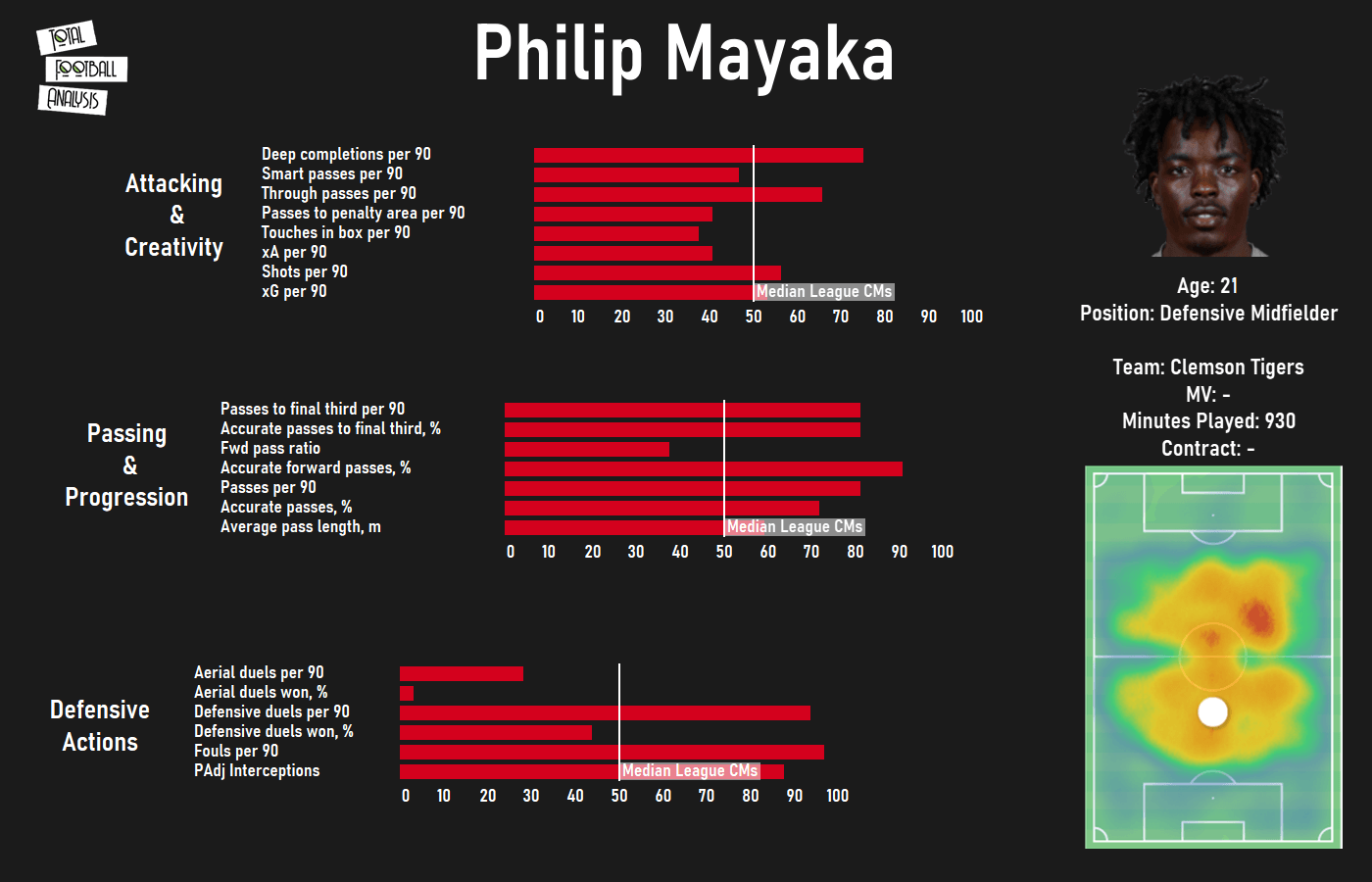 Philip Mayaka is a Kenyan midfielder who joined Clemson from the Montverde Academy. In his two seasons with the Clemson Tigers, he played 32 games, scored two goals and assisted eight.

Mayaka is right-footed and stands at just 170 cm / 5’7’’’. He’s 1uick, agile and strong despite not being big. He’s poor in the air because of his height but he fights and at least makes it difficult for rivals to win duels.

He usually plays as the lone defensive midfielder in his team’s tactics. Mayaka stays as the deepest midfielder, distributing from there but always ready to press quickly and prevent counterattacks. He moves the ball quickly, mostly from side to side but plays forward when he sees the chance with accurate low passes. His good decisions on the ball can be seen in the good balance between safe passing and progressing he has while still keeping high accuracy.

Despite being a defensive midfielder, Mayaka’s technique is solid, with good close control and passing range. He’s press resistant, using his low centre of gravity to dribble between rivals and out of pressure. When he recovers the ball with spaces in front of him, he quickly transitions into attack with dribbles or carries. He doesn’t need many touches to turn and pass and won’t struggle to play under pressure.

In defence, the Kenyan midfielder covers lots of ground and works very hard so he doesn’t need another purely defensive player alongside him in midfield to keep his team balanced. He can press high to prevent transitions and keep his team in the opposition half but is also present in his own half, recovering his position quickly and defending the wings when the full-backs are attacking.

He’s aggressive and intense in duels, his height isn’t a problem and he uses his small frame to get himself between the ball and the rival at the slightest chance. Mayaka gets involved in lots of defensive duels as he’s capable of pressing in advanced positions and then tracking back to defend in his own half. His success rate isn’t excellent because he’s capable of disrupting the game without winning the ball back and applying several pressures in the same play.

Mayaka looks like a player who could have an immediate impact in the MLS. His excellent work rate and ball-recovering efforts are well complemented with his solid passing and his ability to dictate from the back and initiate transitions, making him a similar player to Chelsea‘s Kanté. After a short adaptation to a higher tempo, he should be able to show similar performances in the MLS to what he showed in college soccer.

All player profiles in this piece were created by the wonderful Sathish Prasad (@SathishPrasadVT on Twitter). Go check out his stuff!