On Wednesday night MLS served up a full slate of matches, most of which had major implications. With the season drawing to a close, the fight for postseason spots has intensified. The San Jose Earthquakes welcomed Real Salt Lake in a battle for the last playoff spot.

Since surviving an eight-game stretch where they lost five games and tied three, the Quakes have won five and lost two. Their recent run of form has catapulted them back into the playoff spots. A victory against RSL would move Matias Almeyda’s side into seventh place.

Real Salt Lake were coming off a five-game stretch where they only came away with four points. Led by Freddy Juarez, three points would put RSL back in the playoff picture. Their record in away fixtures does not bode well, only winning twice away from home.

At the end of the night, the Quakes were able to move up to seventh place in the league. This tactical analysis will look into how San Jose was able to control the game, and Real Salt Lake’s attempts to find a way through an energetic press.

Matias Almeyda’s Quakes lined up in their usual formation. Club legend and talisman Chris Wondolowski led the line, supported by Andy Rios, Carlos Fierro and former La Liga player Cristian Espinoza. The four attackers have combined for 11 goals and nine assists. JT Marcinkowski started his eighth straight game and was looking to secure his fourth clean sheet of the season. 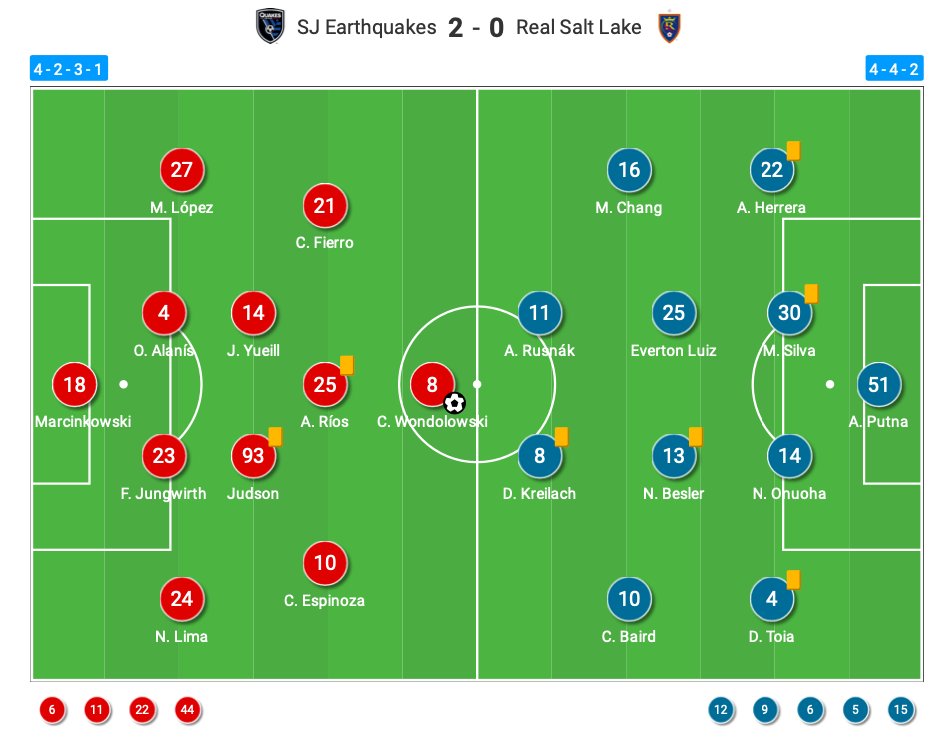 Freddy Juarez lined up his team in a standard 4-4-2, with the intent of stifling San Jose in the middle. The visitors were counting on their attacking players to create chances. Forwards Damir Kreilach and Albert Rusnák have scored seven and two goals respectively. On the flanks, Corey Baird and Maikel Chang have combined for three goals and five assists. At centre back, former Manchester City and QPR player Nedum Onuoha started alongside Marcelo Silva

The Californian’s defensive tactic is an anomaly within the MLS. While it can be said the Almeyda is a disciple of Bielsa, El Pelado’s defensive style is a little more frenetic. San Jose has adopted a form of man to man marking across the midfield, and this double-edged sword can either win or lose a game.

Most teams will look to control the space, San Jose looks to bully the opposition out of it. The Quakes also used multiple players to press the ball carrier no matter what third they were in. The Quakes players tackle with an intensity that would make Atletico Madrid supporters proud. Using the following sequence from the first half we see this tactic in action. 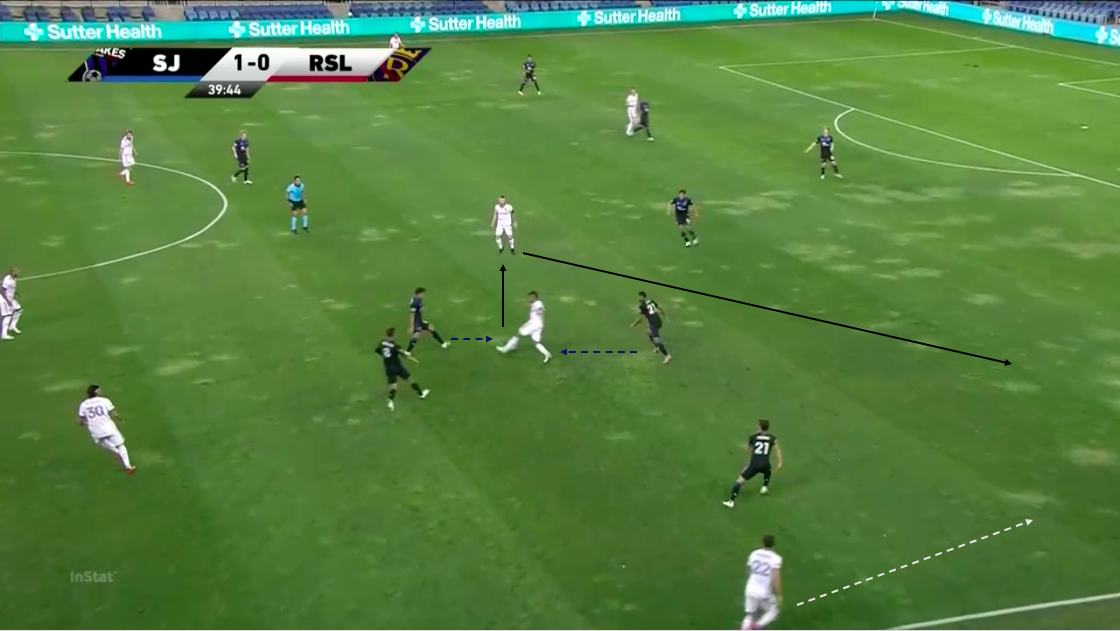 As the ball arrives at the RSL midfielder’s feet, we can already see the San Jose players near their respective marks. Initially, López begins to force the ball carrier backwards, but he is able to play his teammate. 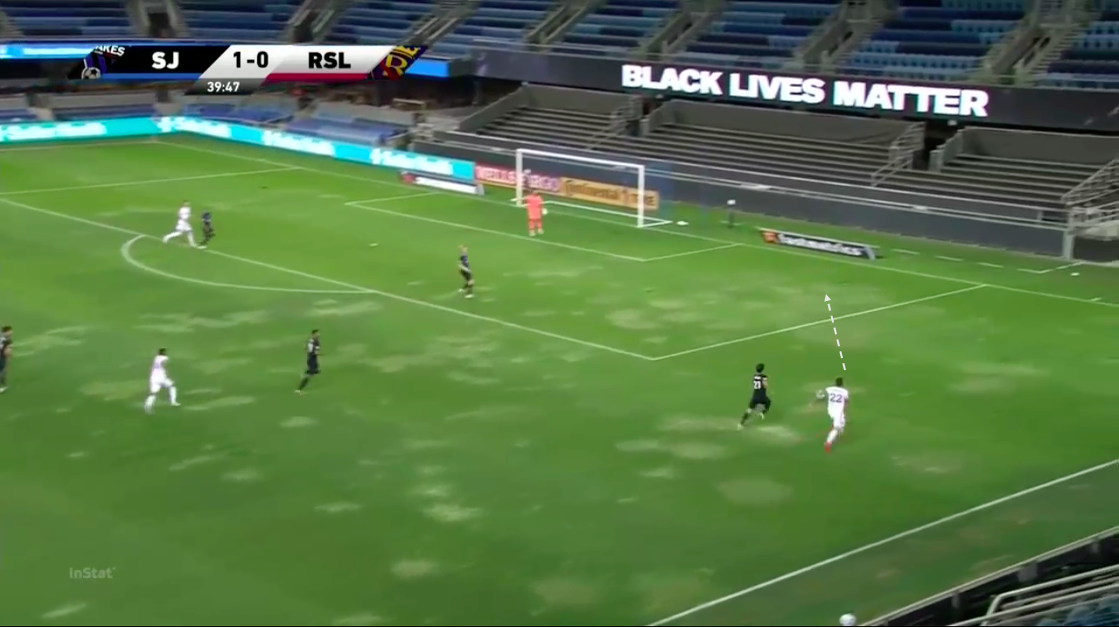 This triggers the RSL right back’s run down the flank. Due to his watching the ball, Fierro is a step behind his mark. The visitors are able to get the cross off, but Yueill is able to arrive just in time to block the shot. 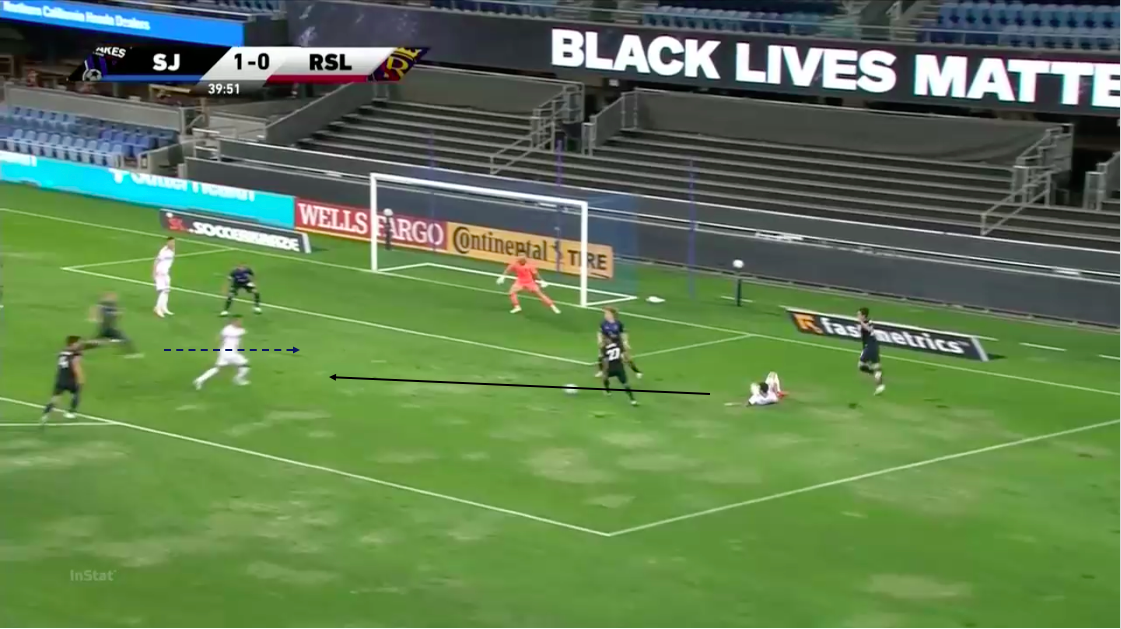 Against a more clinical and dynamic team, this defensive tactic is incredibly dangerous. During the example, we can tell the amount of space that is given up if the defenders do not arrive on time. Fortunately for San Jose, Real Salt Lake had an incredibly off night.

In the next section of the analysis, we will take a look at the visitors’ nightmare in the final third.

As stated in the previous section, San Jose’s man to man press has its weaknesses. Unfortunately for the visitors, they were not able to take advantage of that. Below we will look at the numbers behind their poor attack.

The visitors were able to attack 36 times, but only seven of these attacks ended with a shot. Of their eight shots, one being a free-kick, none bothered Marcinkowski. Below we see a breakdown of their attempts in the final third. Looking at their xG, we can see the shots they took were mainly done so under pressure and from poor areas.

Real Salt Lake also did not make good use of their wingers to serve crosses into the area. Only attempting eight total crosses, the visitors had one connect. Using an analysis of their crosses as a reference, we can see how this tactic was underutilized.

As they chased the game, RSL only registered three shots in the second half.  The combination of San Jose’s press and lack shots and crosses doomed the visitors to a poor offensive outing.

San Jose’s energetic approach also extended into their attacking phase. They were able to sting RSL on seven different counter-attacks, and 10 attacks with shots. Below we can see that the Quakes hit RSL on the flanks and down the centre multiple times. 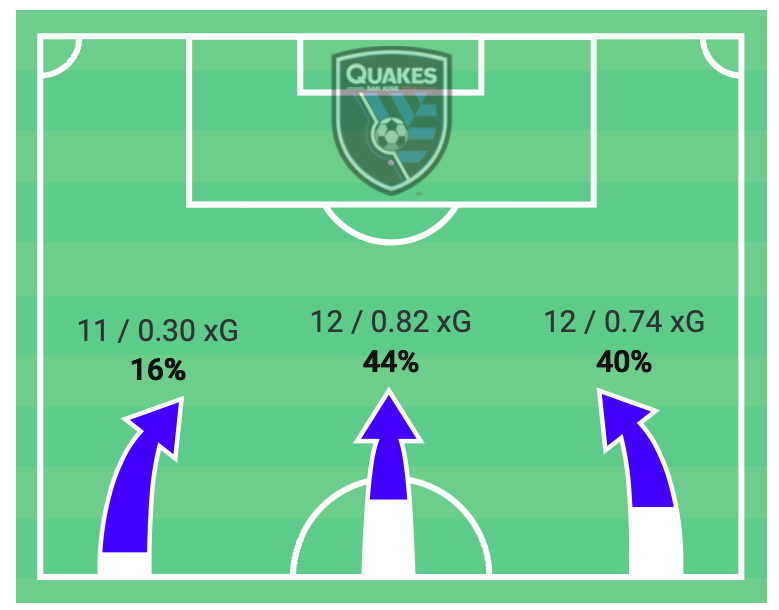 The following sequences are perfect examples of their attacking tactics. The first example shows how San Jose kept their attackers quite high and wide, which spread RSL vertically. This tactic also allowed the Quakes to counter with more players. 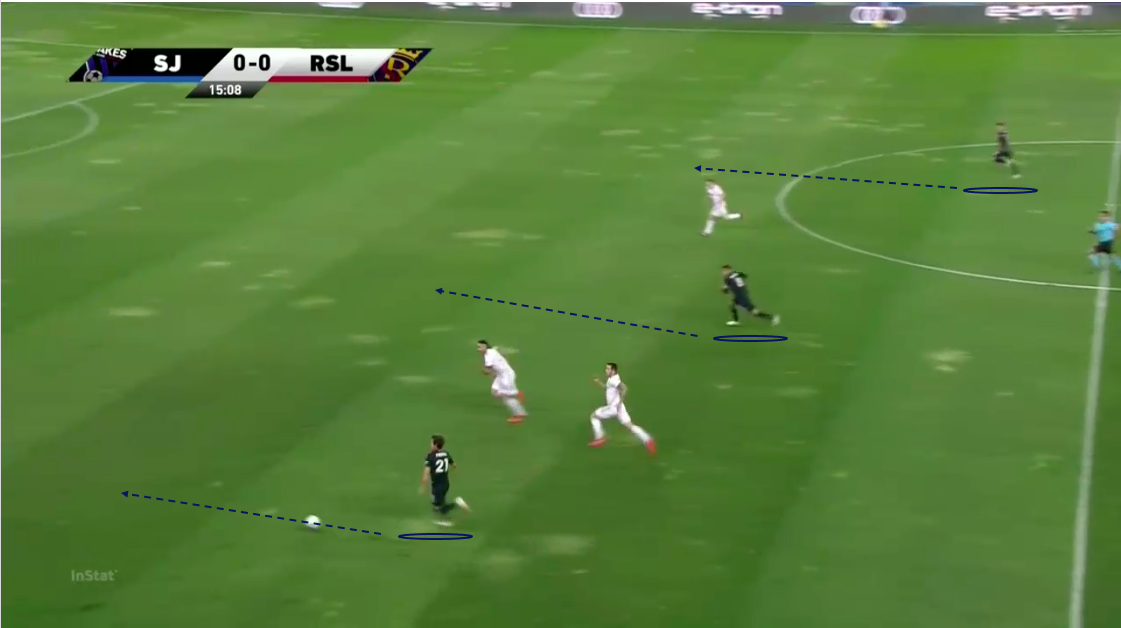 We pick up the sequence after Judson is able to find Fierro with a pass after a clearance. Wondolowski has curved his run away, which places him between the last defenders. Rios joins the attack on the far side to create a 3v3 counter. 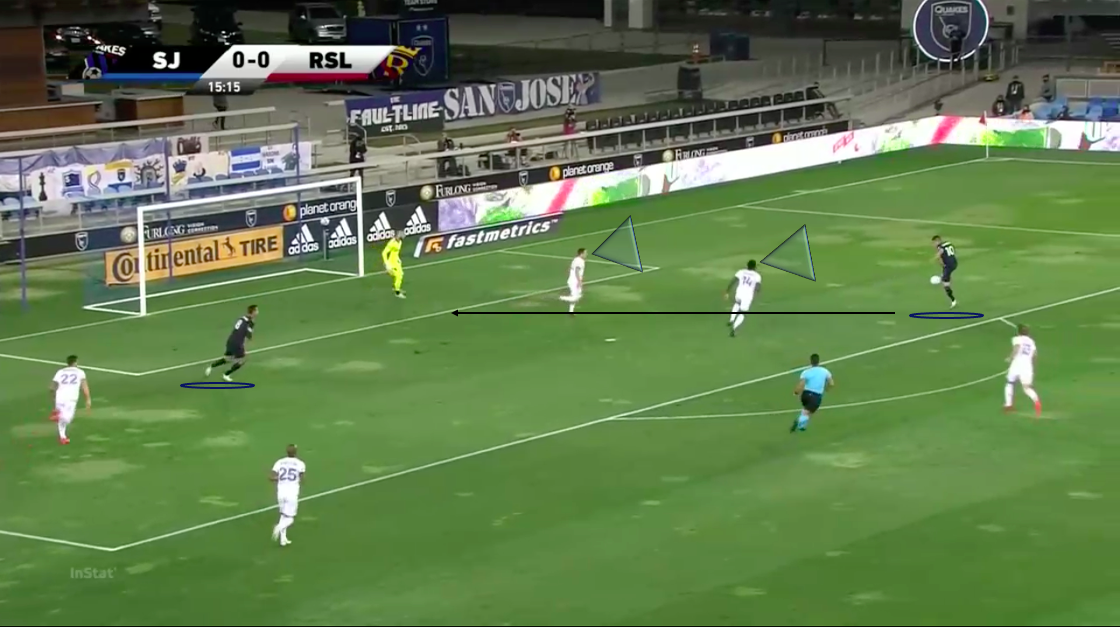 After Fierro has crossed it in, Wondo’s dummy lets the ball skip to Rios. In the image above, we can see that every single RSL defender is watching the ball. This immediately positions Wondolowski in their blindspots. 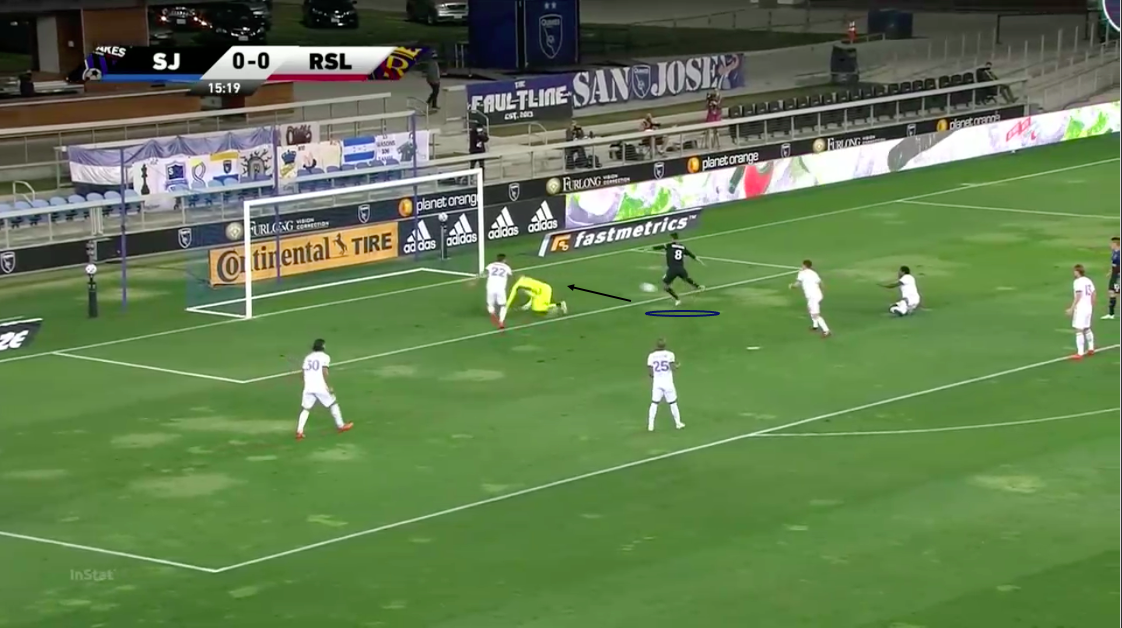 As Rios’ shot cannons off the crossbar, Wondo is able to react to the ball before the defenders can. Due to his movement and positioning the striker taps San Jose into the lead. 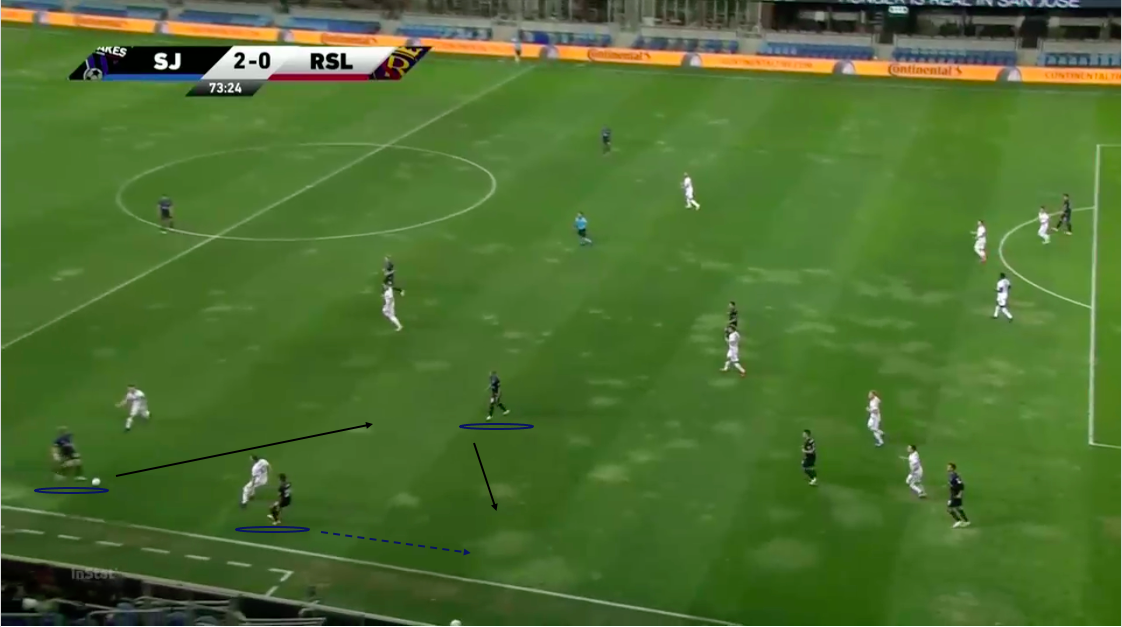 The next example showcases the Quakes use of the flanks to create chances. Due to Real Salt Lake’s defence, right back Lima can only pass back to Jungwirth. The centre back is able to play Judson, who is able to use a third man pass to get the ball back to Lima. 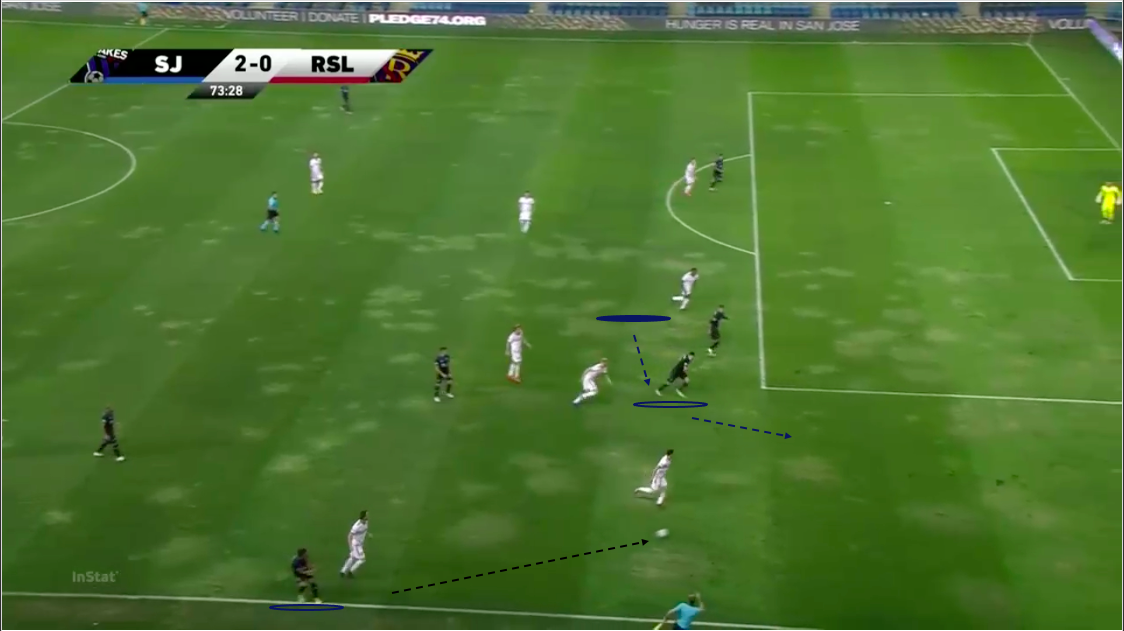 Lima then plays a ball to Salinas after the veteran makes a diagonal run behind the defensive line. Once again Wondolowski’s movement off the ball is key. 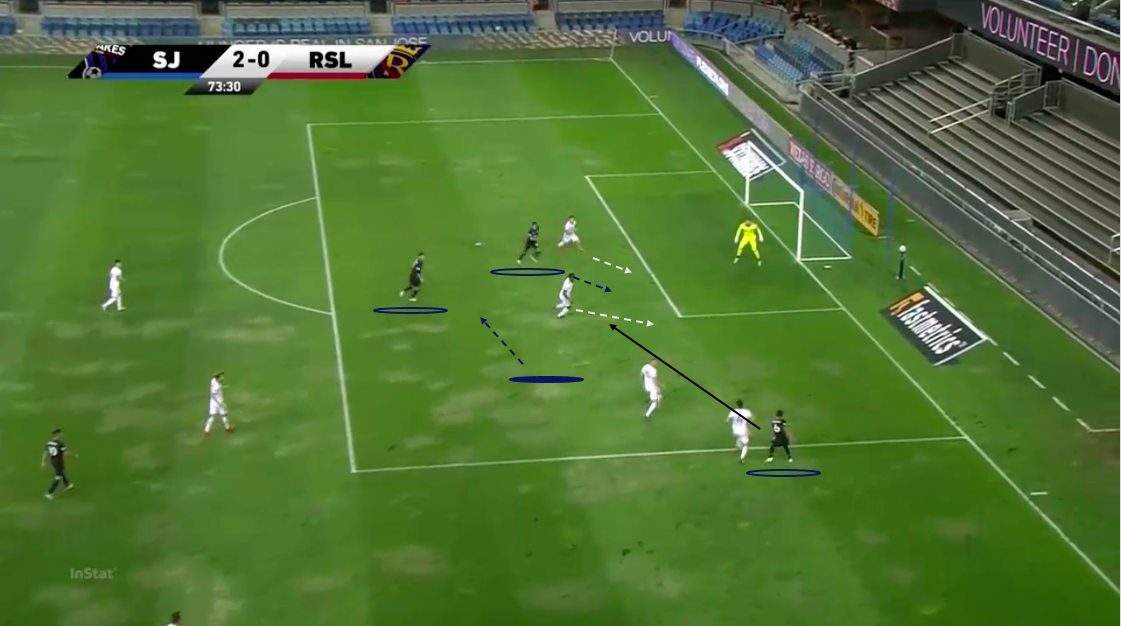 The striker takes his run behind the defenders as they converge towards Salinas and Rios. This tactic allows Wondo to have an open look, and he buries the cutback.

Freddy Juarez’s team defended in a compact 4-4-2. They looked to funnel San Jose to the flanks, and by shifting as a unit RSL wanted to create numerical advantages for themselves.

Once Real Salt Lake was able to pin San Jose out wide, they would force them back and anticipate mistakes. Analysing the following sequence we see an example of this defensive tactic at work. 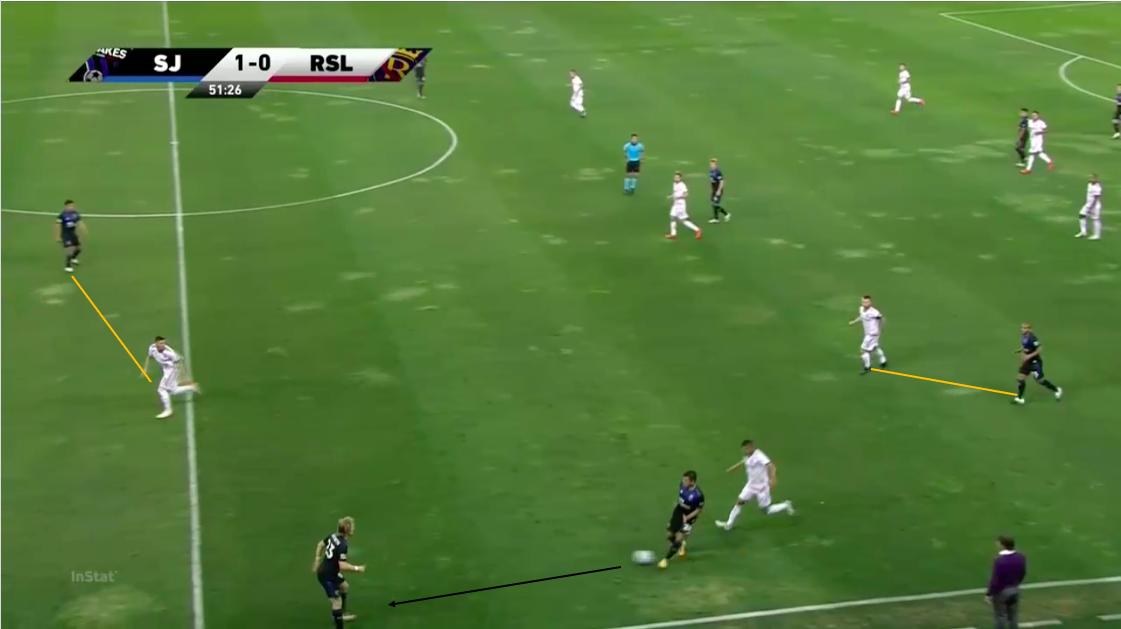 After creating a 5 v 4 in their favour, the visitors were able to force San Jose into a backwards pass. As left-winger Baird pressures Lima into moving backwards, Kreillach anticipates a potential pass to the goalkeeper. The combination of these movements leaves Lima with a pass back to the centre back. 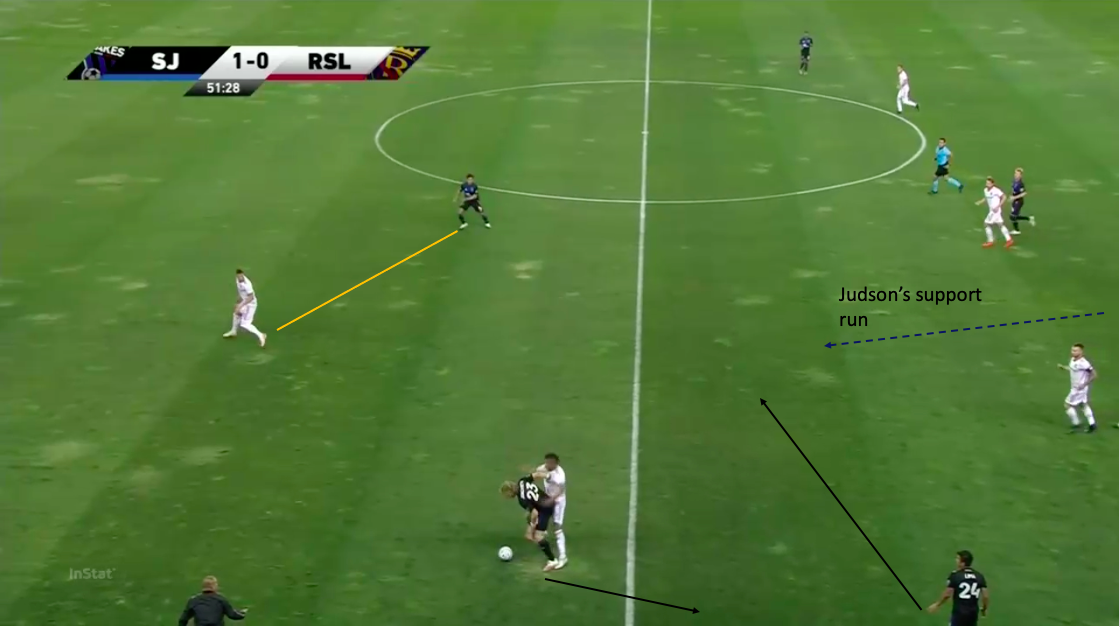 Baird moves his press on to Jungwirth, who is only able to pass back to Lima. As RSL continues to shrink San Jose’s passing options, Judson arrives in support. 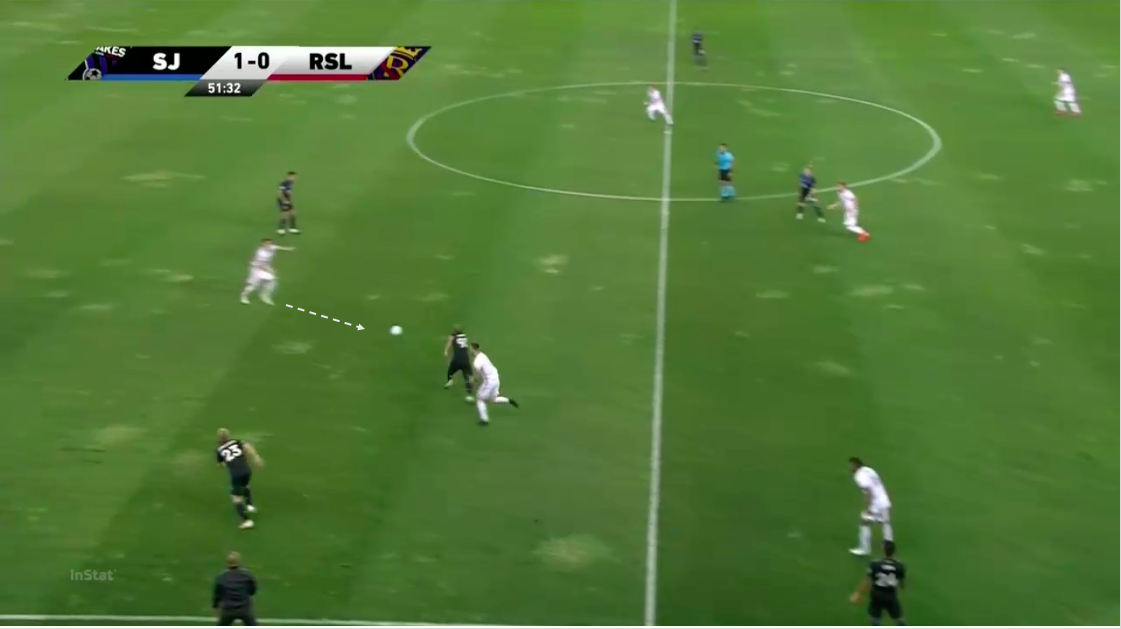 Using his poor touch as a trigger, Kreillach and Besler press Judson from two sides. After Kreillach is able to win the ball he draws a foul and RSL regain possession with the resulting free-kick.

This was a game where the team with the most energy won out. San Jose was able to batter Real Salt Lake in almost every facet of the game. After their dismal run of form, the Quakes have been able to turn it around in the home stretch. RSL’s time to make the postseason is running out, and it seems as if the squad is set for a rebuild after the season is over.

The Earthquakes last two games are tough, but if they can come away with a point or two, they will be present at the Western Conference postseason. Real Salt Lake’s next few fixtures seem relatively easy on paper, but they will prove to be incredibly tricky.