In this scout report, we will look into Lyon’s young left-back Melvin Bard. Bard has recently been promoted to the first team after a couple of impressive years at the youth level, where he was among the best players in Europe. He has made 7 appearances and has been impressive in most of the games.

This report will give a full tactical analysis of how Bard contributes to the tactics of his team. Let’s get into the analysis.

As said, Melvin Bard is a modern-day left-back who likes to go join his team in the final third and contribute in the final phase of their attacking play. The positioning map is given in the image below, as we can see red areas up and down the left-flank showing that he contributes immensely at either end of the pitch. So Bard can also be deployed as a wing-back when his team were to change their system. 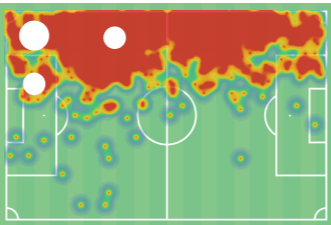 Being a left-back, Bard always hugs the touchline looking to overlap and provides the width for his team like in the image below. This off-the ball attacking instinct of his eventually contributes to heavy spatial balance for his team. 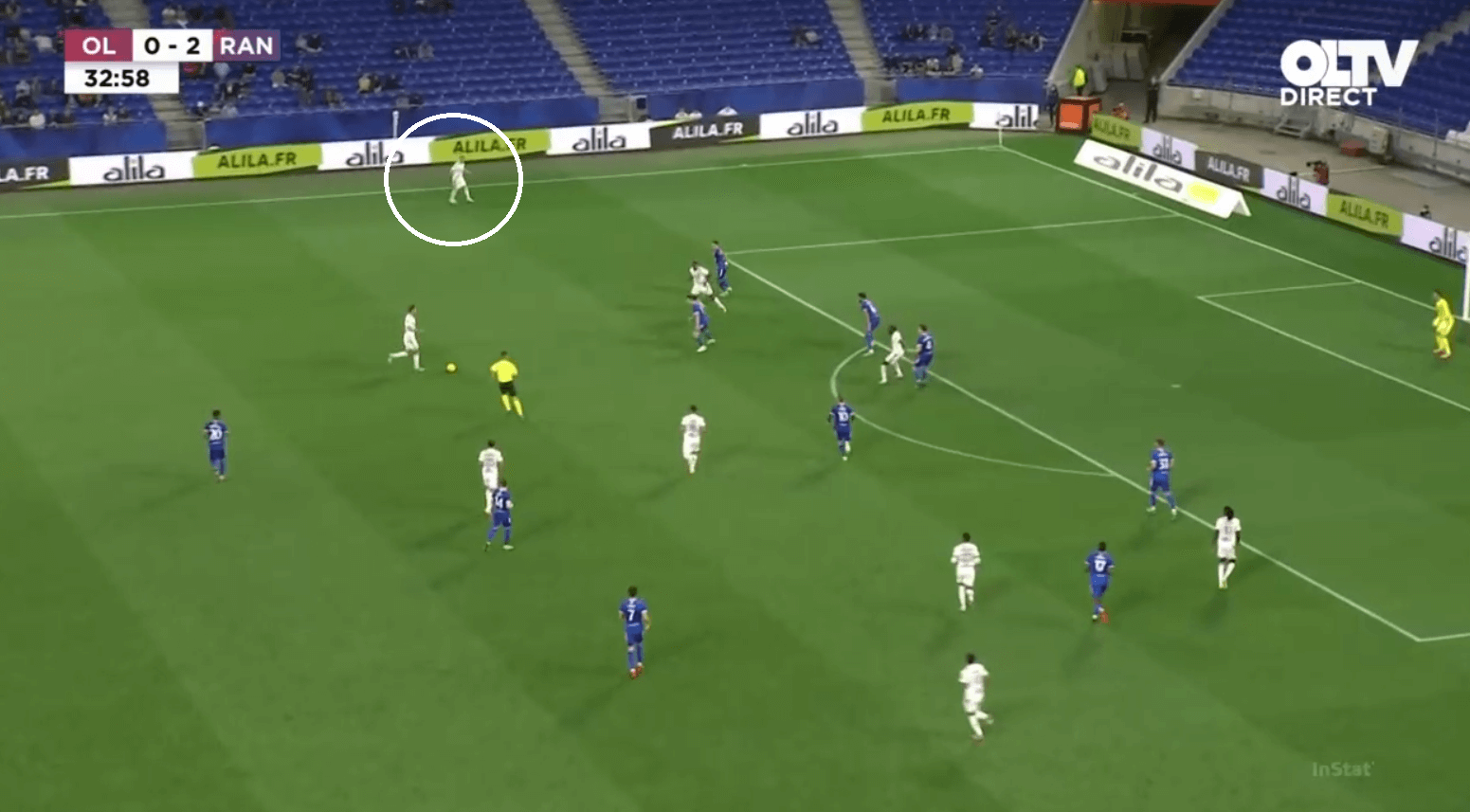 When the opposite full-back marks the inside forward it gives Bard a lot of space to deal with and use his attacking capabilities, about which we will discuss in the following section, or when he is marked it stretches the opponents’ defence opening spaces inside. In the image below shows the Monaco right-back getting drawn to Bard and hence leaving his position to open space into which Dembele makes a run. 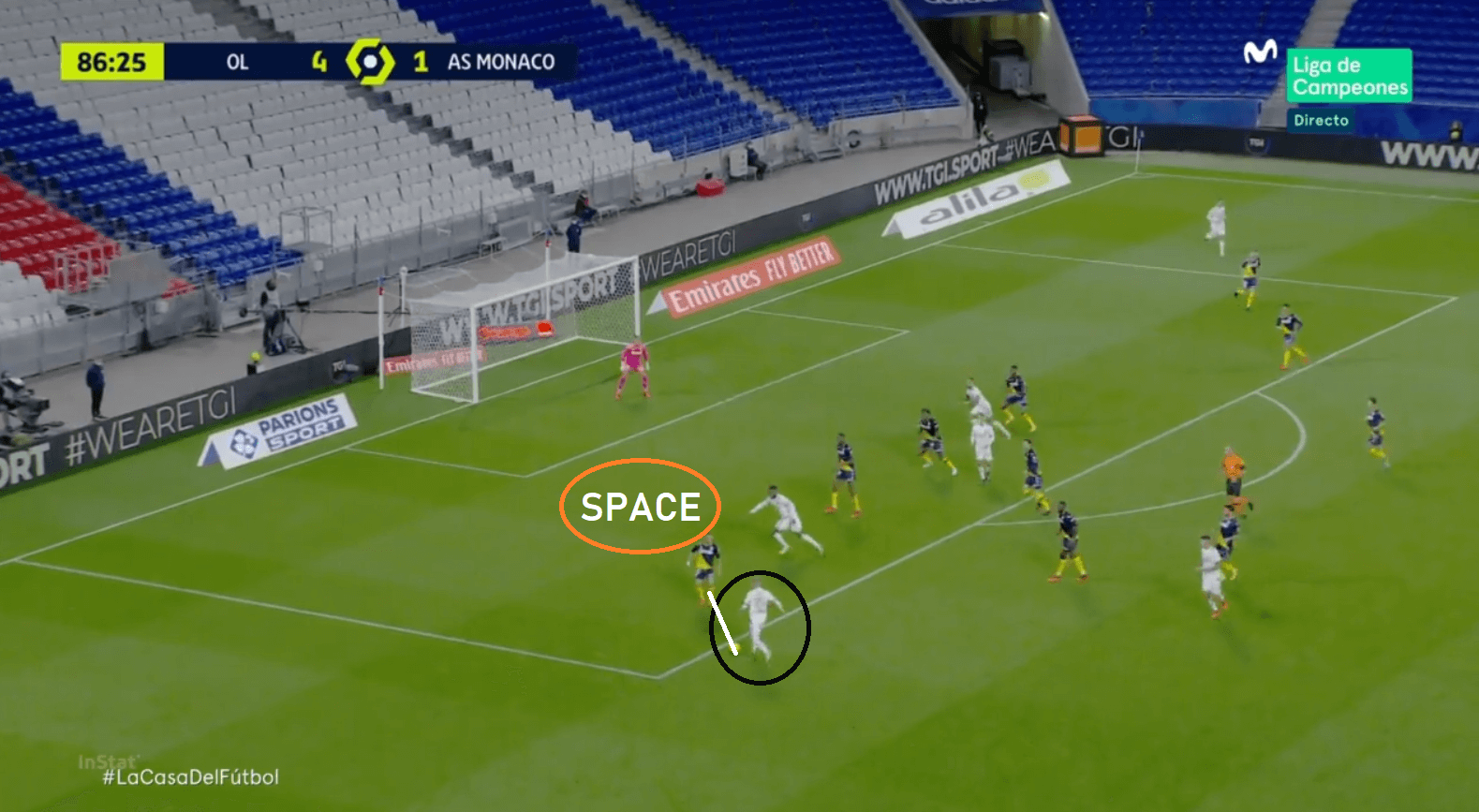 Melvin Bard has averaged 12.32 defensive duels per game in the Ligue 1 this season. It also goes with a success rate of 66.67%, which means that he has successfully won 8.21 duels in the league. For a young 20-year old, this is an excellent statistic as he turns out to be one of the best 1v1 defenders in the league statistically. The image below shows the duels that he has won in his own third. 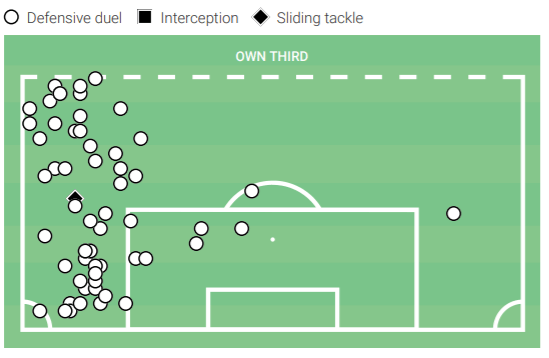 It says that he does not go into a lot of slide tackles, but ensures that he wins the duels by standing tall and maintaining his body position well. The example below shows his on-ball defending (when he directly defends against the person having the ball). He maintains a good distance between himself and his marker. Here he acknowledges the importance of maintaining the right distance as being too close means that the opponent can go past him and also being too far can give time and space to that player. Immediately, when the opponent lifts his leg he goes for that tackle at the right moment. A fraction of second earlier or later could have resulted in a foul or him getting dribbled past respectively. 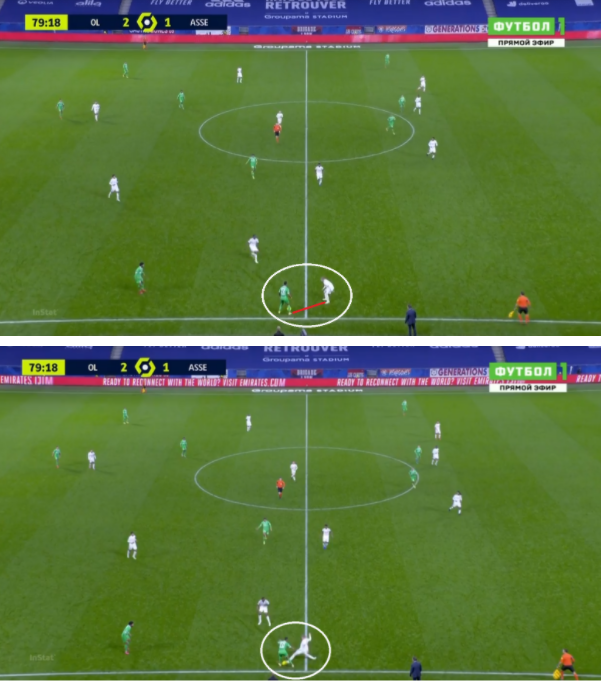 Staying tall means that he can immediately start a counter-attack as he is still standing tall whereas, during slide tackles, the player cannot start the attack since it takes time to get up to move the ball and has to resort to putting the ball out of play. This way he ensures that his team retains possession after a tackle. Even if he is too far behind his opponent Bard’s impressive acceleration means that he does catch up with him without needing to put in a tackle from behind and uses his upper body strength to pressurize the opponent while immediately recovering the ball. 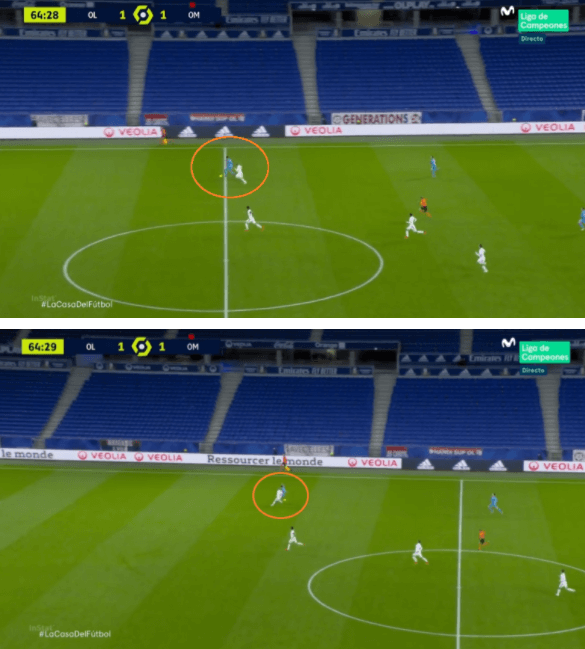 In the above example. Bard is chasing a Marseille player in a counter-attacking situation. Initially, he is behind but catches up with him using his brilliant pace and also in the second image we can see his body position as he closes a chance for an inward run for the opponent player to delay the attack. The opponent player then without any other option tries to trick him but he intercepts the ball from the player easily.

His recovery map shows that he is also adept at intercepting the ball and also performing a variety of defensive recoveries up and down the left flank. The statistics also back that where he averages 11.68 recoveries per game in the league this season. A lot of those recoveries are under counter-pressing situations (7.89, 67% of them). This is due to the fact that Lyon as a team looks to win the ball immediately after losing it and emphasizes high energy and intensity throughout the match. This has been well-tuned into the gameplay of Bard as he shows a lot of intensity during the match. 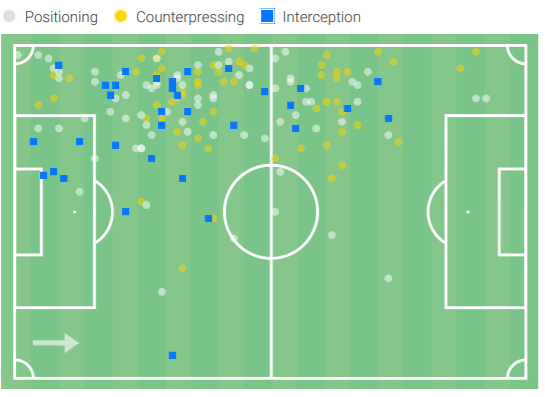 Comparing him with some of the top left-backs from the league shows that he has outperformed all but one of them in both the number of successful defensive actions as well as interceptions made (which is possession adjusted). Only Jordan Amavi has made more defensive actions than him and Julian Bernat has more PAdj Interceptions than Bard.

Aerially, Bard isn’t very strong and as he wins only 42% of his aerial duels. Most of the teams today use strategic long balls where they always try to look to win it as the teams these days do not use long balls very much unless it serves a particular purpose. In that case, a team can exploit Bard’s ability in the air as he stands only at 173cm. Although he has a great upper body strength which can help him to win duels, if he manages to improve the timing of his jumps, which he seems to misjudge at times due to his young age, he could strongly contend in the air.

Dribbling is Bard’s biggest strength when he has the ball. On average he has recorded 5.05 dribbles per game in the league this season. What makes it astonishing is the fact that over two-thirds of the dribbles (68%) have been successful. This shows that he is not only a heavy dribbler but also an efficient one. The chart below shows how well he does when compared to the other full-backs in the league. 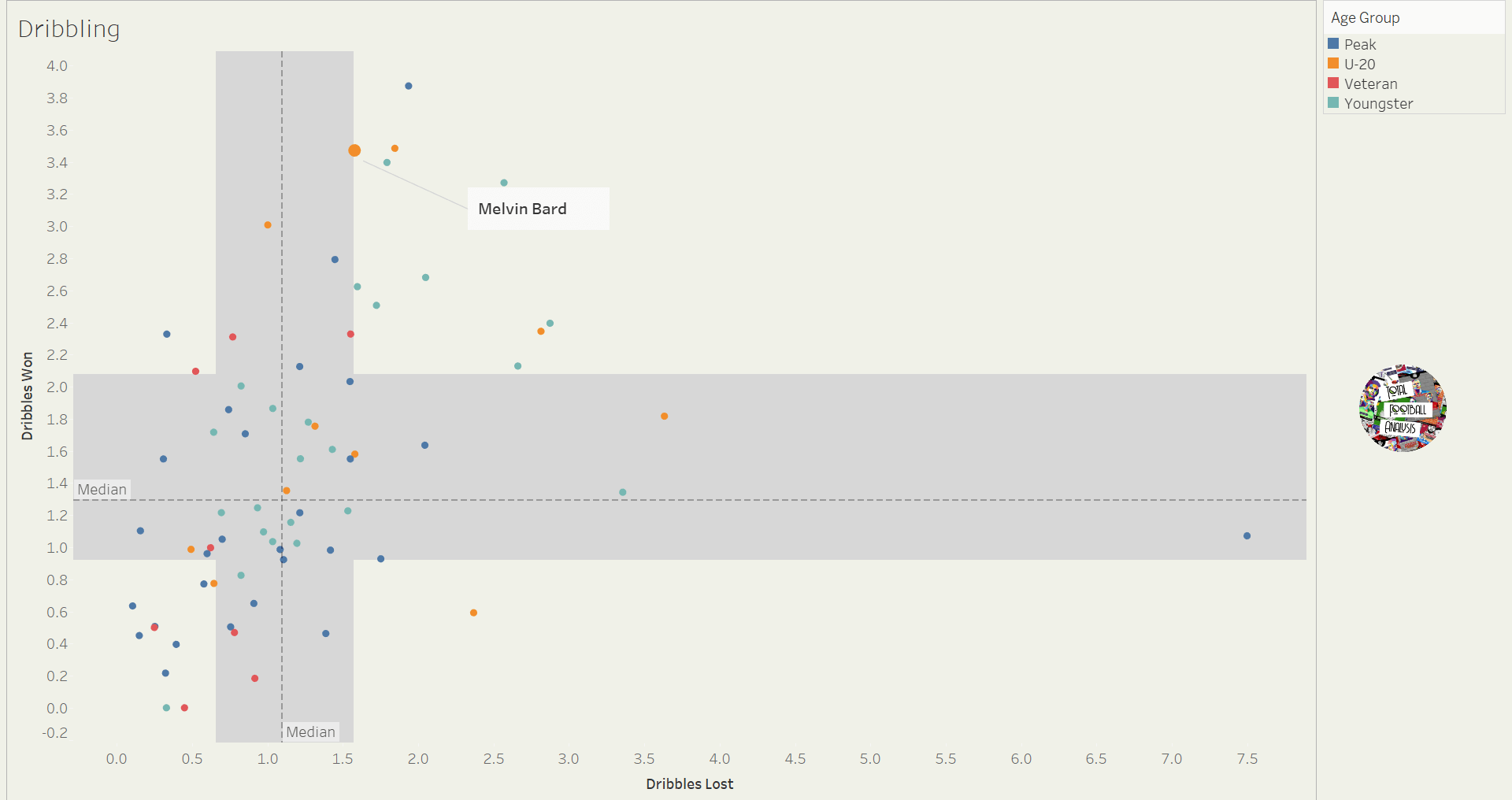 His control over tight spaces is one of the reasons for his dribbling success. Even under heavy pressure situations and when he is being tightly marked, Bard does well to get out of the marker and move the ball forward as his touches are clean and make sure that the ball is exactly where he intends it to be. In this example below, Bard is being tightly marked by 2 opponent players. He uses his upper body strength to first protect the ball from them. One of the players then commits into a tackle and Bard rotates 45 degrees to put that player out of reaching the ball. He immediately nutmegs the other one to carry the ball into the box. 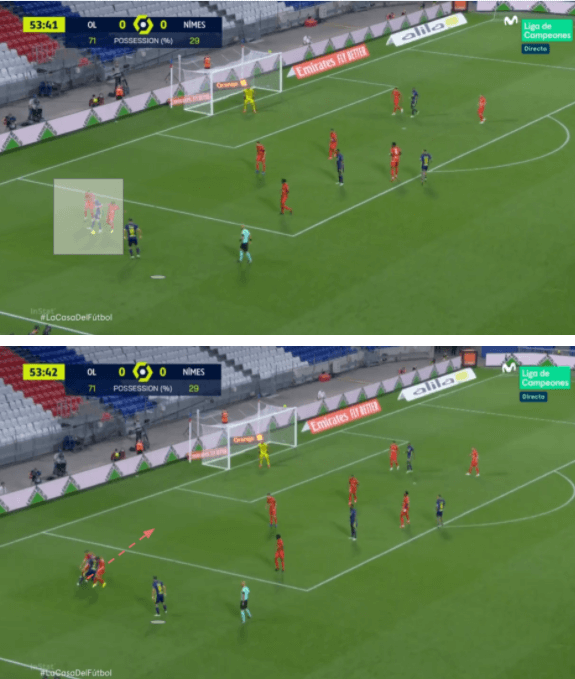 Along with that Bard also is pretty explosive with his runs. He can carry the ball with good pace and with great acceleration over large distances pretty easily. He has made the second most progressive runs in the league for a full-back by averaging 4.11 runs every game. His body feints are natural as his relatively low centre of gravity enables him to be agile and have great balance and trick the opponent into one direction while he immediately changes his direction.

Being part of the team in the first phase of play (building out from the back), Bard gets involved a lot as one of the full-backs. This way he gets to play a lot of passes during a match especially when the ball has to be played from the flank. Statistically speaking, he averages 64.11 passes per game in the league this season with a retention rate of 84.24%. This is decent for a young full-back who likes to go forward and also for someone involved in the final phase of a team’s play. He records 12 progressive passes per each game in the league, which is one-fifth of the total passes he completes. Along with that he also manages 0.63 smart passes and 0.32 key passes per game.

Bard averages 5.37 crosses per game and ranks sixth in the league for the most number of crosses attempted per game. Before delivering a cross, Bard uses his pace and trickery to create space for him to cross the ball. This sets him up very well for delivering a cross into the box. In the image below, Bard moves backwards to the wider regions to create space for delivering the cross. He then accurately puts in a good cross that rightly hits target-man inside the box. 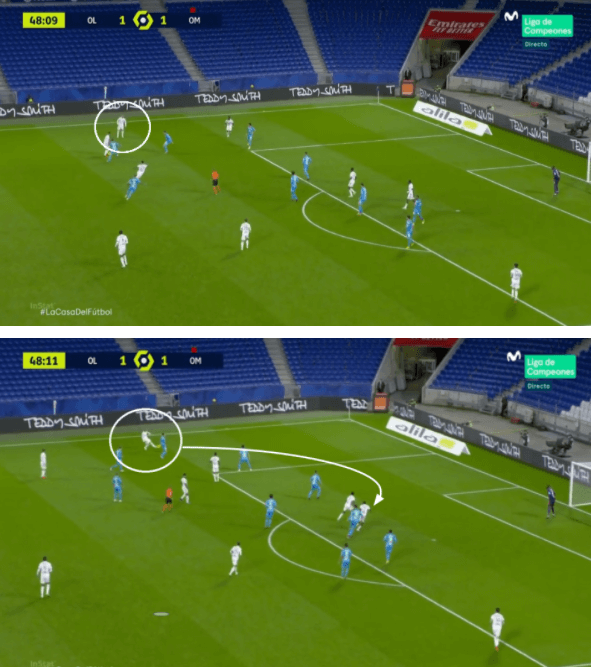 Despite such numbers crossing isn’t one of his strongest abilities as he manages to successfully deliver only 29.4% of them. This is a place in which Bard can improve where he seems to get the fundamentals right before delivering the cross i.e creating space for delivering it but only at times failing in the final delivery of the ball. It’s not that he is outrightly bad at the crossing but when compared to his other on-ball attributes he falls short in this regard. Also, the crossing isn’t something that requires natural ability and can be coached by the right person to improve the output. His rawness can be seen in the example below. Here he again has huge space and time to cross the ball, but Bard crosses the ball into a region (white diamond) where no one is occupying and his final ball results in a turnover. 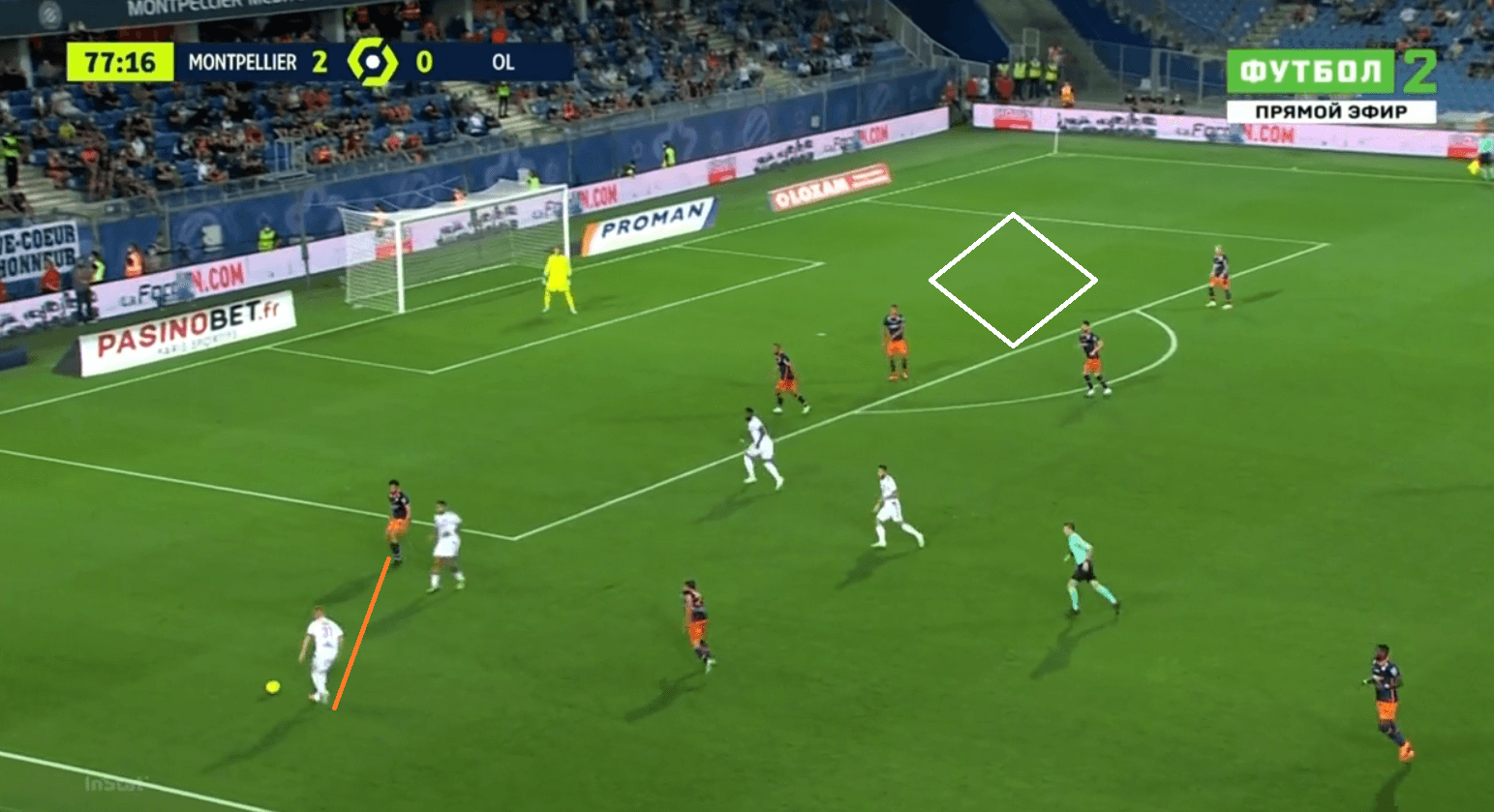 Presently, Cornet is Lyon’s primary full-back/wing-back as he has made a great transition from the winger’s role. The chart below shows a statistical comparison between Cornet and Bard. 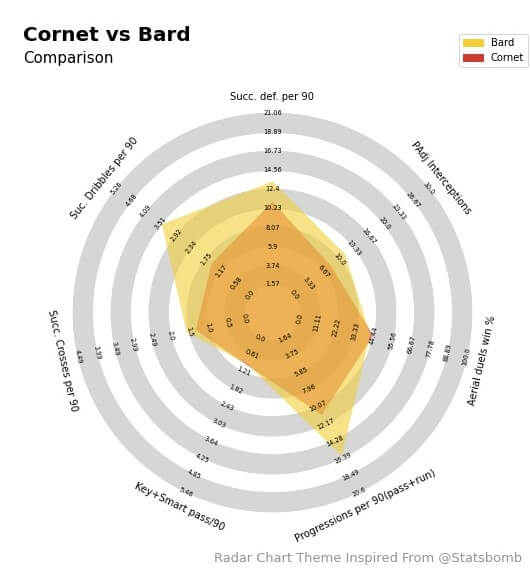 The chart clearly shows that Bard seems to outperform Cornet in almost every major metric and only performs lower than him in terms of percentage of successful aerial duels won, where Cornet outperforms him by just 2%. Bard was heavily linked with teams like Bayern Munich and Liverpool over the summer. With such a huge potential and with teams like Barcelona wanting a new young left-back he could soon make a move to such big clubs.

In this report, we analyzed the strengths and weaknesses of Melvin Bard also while giving a statistical overview of his performance. Bard is highly rated in France and regarded as one of the best U-21 players in Europe.