After playing a crucial role in Julen Lopetegui’s Europa League-winning Sevilla side, Éver Banega is off to finish his final professional contract at Saudi Arabia with Riyadh-based side Al Shabab FC. Although the transfer agreement was reached in January, the Argentine finished his spell at Seville, ultimately marking a successful season for Los Palanganas.

Although already 32, Banega is a graceful playmaker and ticks all the boxes to be a vital figure for Pedro Caixinha’s side. This tactical analysis will explore how Banega will fit at Al Shabab’s tactics and what he will add to the currently eight-placed Saudi Arabian side.

Under Lopetegui, Sevilla mainly switched between a 4-2-3-1 and a 4-3-3 scheme. Banega played as a number 10, also referred to as an engine, just behind the striker. He plays as an advanced playmaker, connecting the midfield with the lone striker and the wingers.

However, in the 4-3-3, Banega starts as a left-attacking midfielder, who tends to drift towards the centre of the pitch to operate more as a central playmaker. Since Sevilla opted to follow this scheme more often this season, the Argentinian was ordered to operate from the left and was given a more central role vertically towards the left, which is made further evident by his season heatmap:

Similarly, Al Shabab usually line-up either in a 5-4-1 formation – an improvised form of 3-4-3. When Al Shabab are on the ball, one of the fullbacks inverts and completes the midfield four while the wide midfielders cover wide attacking areas. Since Banega prefers to play in a three-man midfield or as a number ten, playing him in a 5-4-1 can be challenging, but can be achieved by deploying a diamond midfield. In this way, Al Shabab’s way of transitioning into 3-4-3 won’t be affected and Banega can also retain his most effective role in the new side. 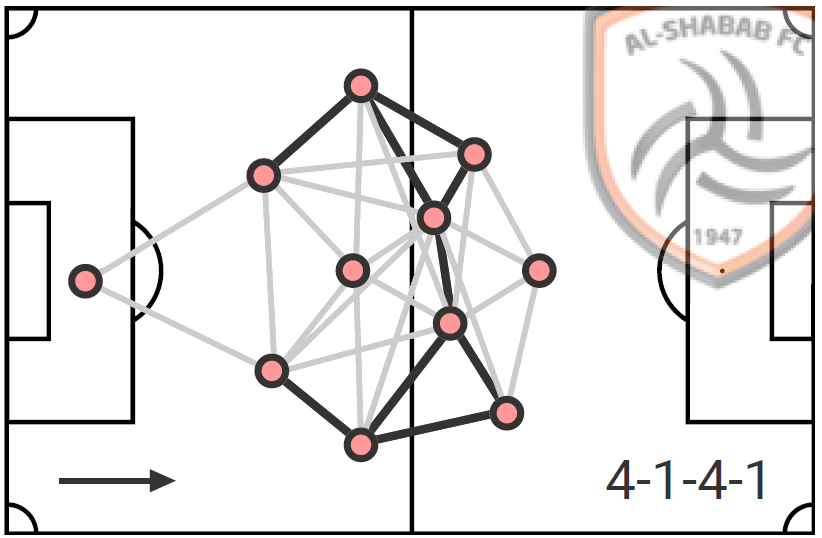 However, Al Shabab tend to be very flexible, as in-game formation changes are frequent in their system. The team can also opt to play in a 4-1-4-1, again assigning Banega the number 10 role just behind the sole striker. In this scheme, Banega will be able to get closer to the role offered to him in Sevilla’s 4-2-3-1.

Currently placed eight in the Saudi Pro League, Al Shabab are struggling big time. The team’s attacking statistics are below the league average under every aspect and are in need to reform their attack and midfield. Although the team tends to play in shapes that fit possession-based football, they lack a skilled playmaker to make things tick.

In this regard, Éver Banega can be an asset to the Al Shabab side. Banega is very good on the ball and can detect spaces to pass. In addition, Banega possesses very good close-control skills, which only adds up to his qualities of being able to create from tight spaces.

The Argentinian has been a reliable channel of supply in Lopetegui’s side, contributing to the build-up as a link-up playmaker. This primarily includes functions such as receiving the ball in spaces and advancing it to the forward/wingers. Banega is equally skilful in switching plays to the wide side, which will only work to fix Al Shabab’s attacking woes. 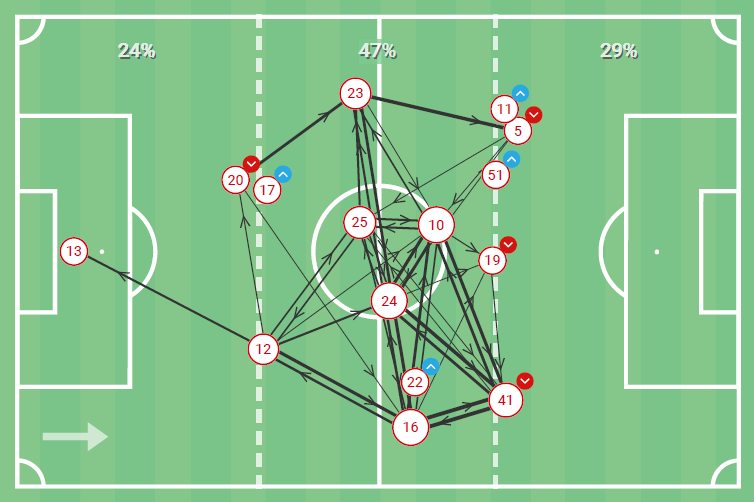 As we can see in the above pass map taken from Sevilla’s Europa League final win against Inter, Banega lies in the middle of the supply system. He is seen receiving from the wide players and providing a proper transit for Sevilla to keep the ball and create attacks out of it.

Coming to Al Shabab, the Riyadh-based side struggles to get its midfield involved in the build-up. Despite pushing as a four-man midfield, the side lacks players that can hold on to the ball and wait for the right instance to pass and exploit spaces created by the opposition movement.

The above instance shows the start of an Al Shabab attack. As the dee-lying midfielder spots space and passes the ball, the receiving player steps ahead and turns to initiate a run. With the opposition alert and in overhauling the side of play, a midfielder with proper space-detecting prowess can make the most out of this situation.

Instead, Al Shabab’s shortcomings are apparent yet again, as they delay the progression and leave it for the very last minute. As a result, the opposition is allowed to cover the spaces and mark the wide player, as well as the other players near him. 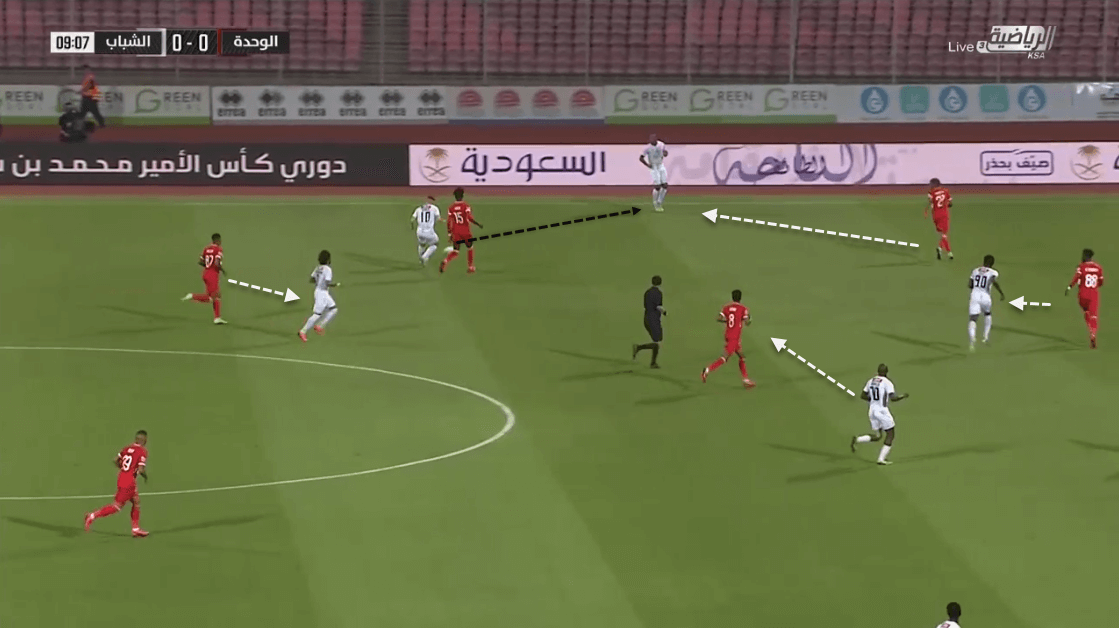 Due to the delay and lack of decision making, a promising attack for Al Shabab breaks down. Not only could the ball carrier be a passer, but a receiver after a quick one-two. A lot of Al Shabab’s attacks are hence broken down like this, as they’re unable to find spaces ahead and as a result, end up passing backwards in order to at least avoid losing the ball.

However, in a similar instance, Banega can use his abilities and understanding to create a more lethal scenario. Here’s an instance from Sevilla’s encounter against EPL side Wolverhampton Wanderers, where Banega receives the ball in space and tries to use the wide player to create a meaningful attack. 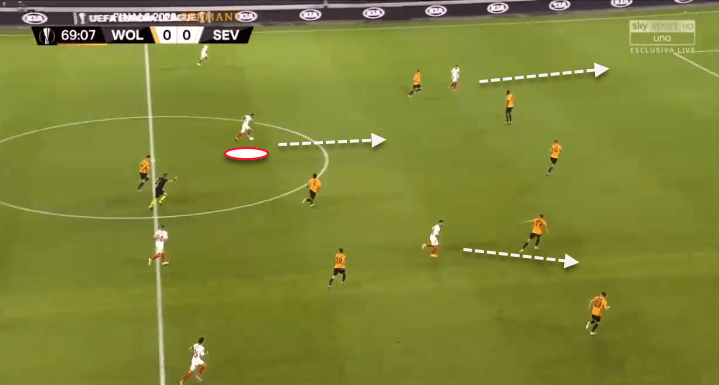 Like the previous instance, after receiving the ball, Banega is seen making a run, with the wide player always available for him to pass towards. However, instead of going for the option that looks safe and obvious, Banega delays his run, draws defenders towards him and opens space for the wide player. 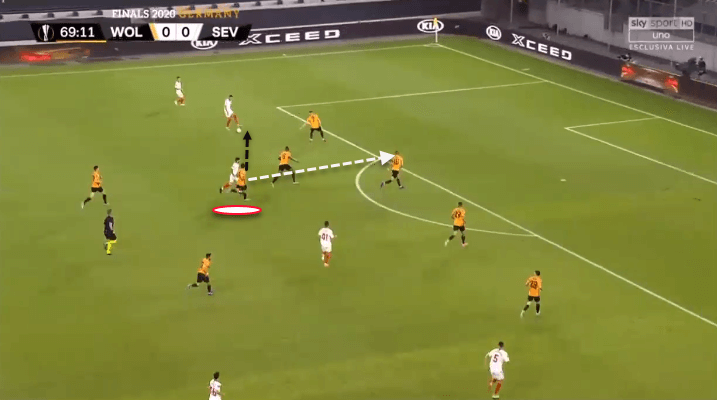 After opening up space for the wide player by making opposition defenders commit towards him, Banega attempts a quick one-two, which sees him glide inside the box to receive and shoot. With a proper demonstration of how he can master time and space, this instance serves to further justify Banega’s playmaking abilities.

A progressive player with vision

Like we already mentioned, Al Shabab are looking for a player that can progress the ball and look for spaces in Banega. Justifiably, Banega masters those traits and was a key figure in doing that at Sevilla. Most of Banega’s attacking moves while transitioning come as progressive passes and sparingly as progressive runs. 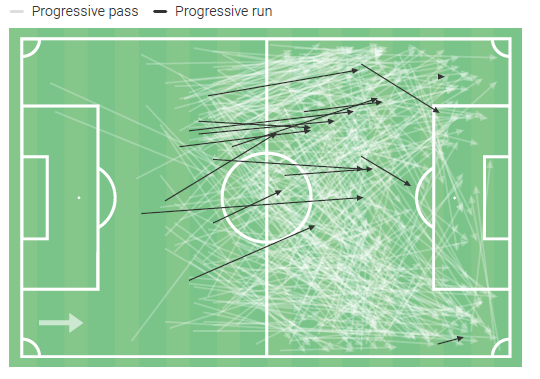 Banega’s ability to spot his teammates in space anywhere in the pitch was second to none in La Liga. Banega averaged 13.14 progressive passes per 90 in 2019/20 season, a figure highest among midfielders. In addition, Banega can accurately find his teammates with progressive and penetrative passes.

In this instance against Manchester United, Banega gets the ball after a teammate wins the ball just outside Sevilla’s box. After a turn, instead of going for a brief run to get his teammates forward, Banega spots Lucas Ocampos, who is making a forward run. 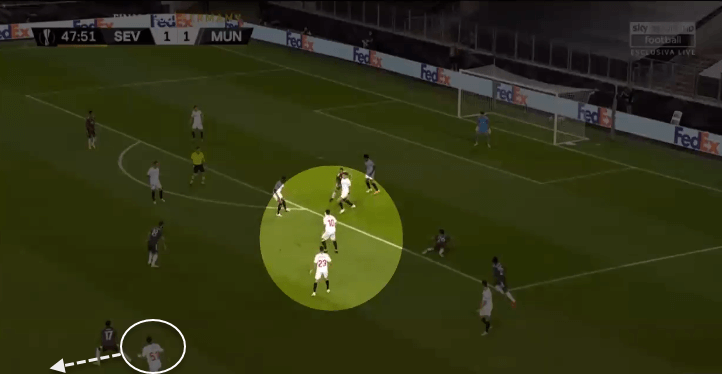 Banega attempts an ambitious pass towards Ocampos after a quick turn. The Argentinian executes the pass well, and as a result, multiple opposition lines are left behind and Ocampos can now beat his marker to go one-on-one with the keeper. 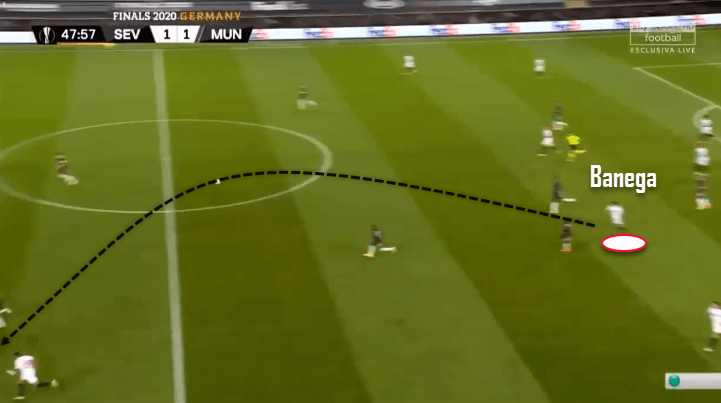 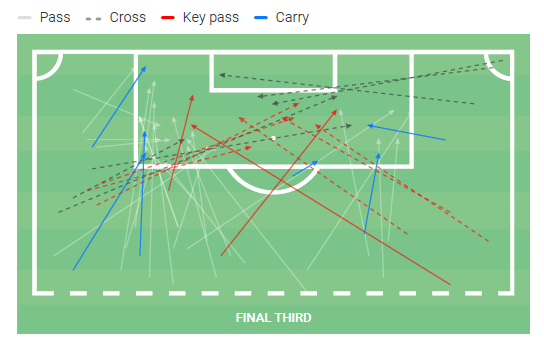 Banega’s ability to use his passing abilities to penetrate and organize in the final third will hugely benefit Al Shabab, as they struggle with getting the ball inside the opposition box. In terms of passes to the final third, Al Shabab stand 11th in the league, with only 69% success in 46.35 passes attempted per 90 minutes. Again, this comes to their midfield that is overhauled yet not very productive in terms of service to the forwards. For instance, in the following occasion, a centre-back is seen attempting a through ball directly to the forwards despite having at least four midfielders between the lines. 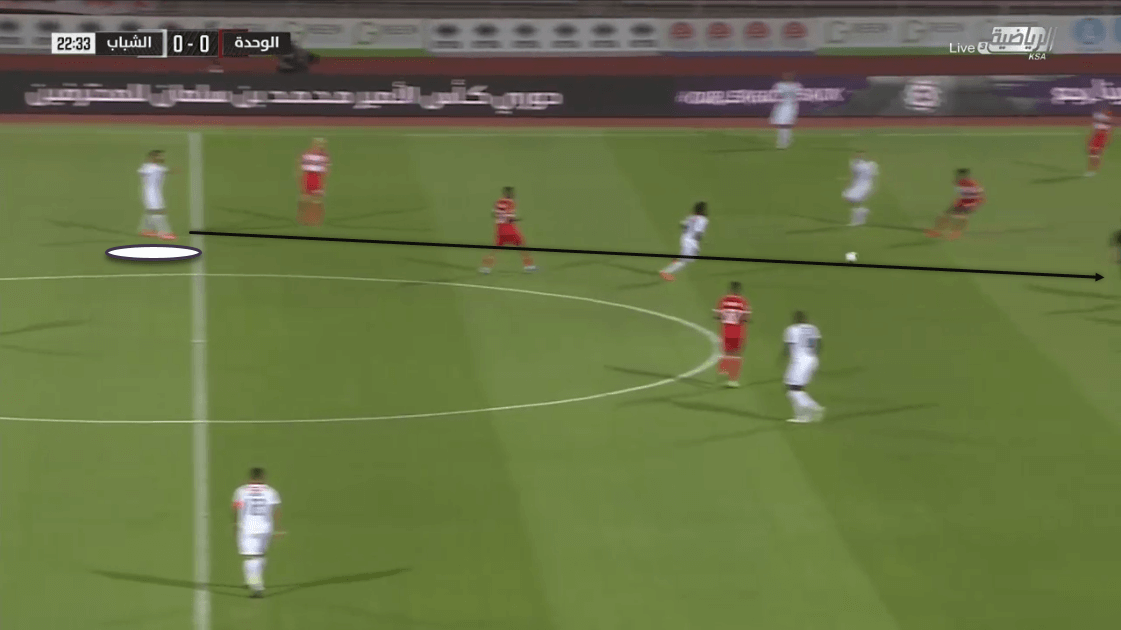 This action is forced by the opponent, as Al Shabab were not able to penetrate through the midfield in several occasions prior to this pass in the same possession spell. Thus, Banega will bring a profile that will be reliable on the ball and can be used as a visionary midfielder to advance the ball through central spaces. This will increase Al Shabab’s attacking productivity, as they’ll be able to get more balls upfront for their forwards to capitalize.

Like this scout report pointed out, Éver Banega carries every trait that a typical Argentinian playmaker carries. Like this analysis suggested, Al Shabab have landed a very skilled playmaker that has all the experience it takes to dictate play in the Saudi Pro League. With a few more suitable recruitment in the attacking department, Al Shabab will grow stronger and will be able to improve on their recent weak performances.