As early as May, two of the most eye-catching players already settled on their destination for the 2022/23 season. Kylian Mbappé would be staying in France as he signed a new contract with PSG, while Erling Håland did not go to Real Madrid either, instead, joining Man City to challenge the Premier League.

Despite Pep Guardiola finally getting a proper goal-scorer, analysis pointed out that the Norwegian wonderkid might not be able to fit into City’s structure. Håland’s playing experience out of his home country included the spell at RB Salzburg under Jesse Marsch, and then to Borussia Dortmund with Marco Rose. Both coaches were emphasizing work against the ball, but with the ball, City were far more demanding. This scout report would explain in what aspects Håland and City would need to do to adapt to each other, because football, is not only one way.

The strengths of Håland

When it comes to Håland’s personal ability, we had some tactical analysis explaining his strengths and movements earlier this year. Particularly, we are focusing on his strong capacity to make runs behind and his competence in the penalty box. 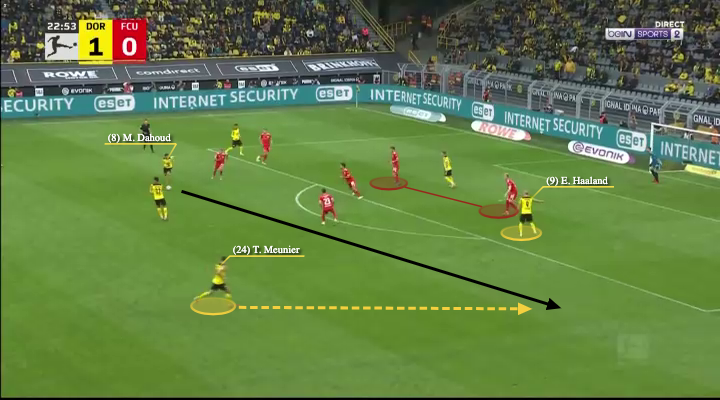 When his team is in possession and in the last third, Håland showed great intention to attack spaces behind with runs. In the first image against Union Berlin, the Norwegian player showed great non-verbal communication as he pointed where he wanted the ball – on the defender’s blindside.

However, Mahmoud Dahoud did not slice the ball in, he chose to release Thomas Meunier on the far right. 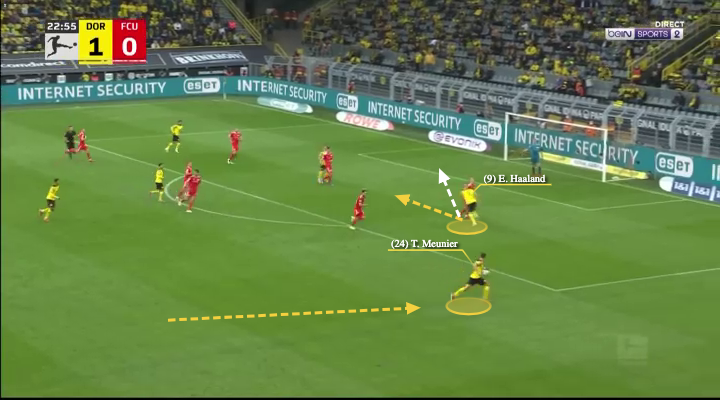 Then, Håland’s position could be invalid or the angle to score was limited. But the true value of this player was his awareness to reposition himself in the box. As Håland saw Dahoud’s pass went wide, he moved to be able to receive the next pass.

But where did he go? In the second image, as Menuier received, Håland had several options, including different directions of runs to get ready for the cross. Did he go white or yellow? 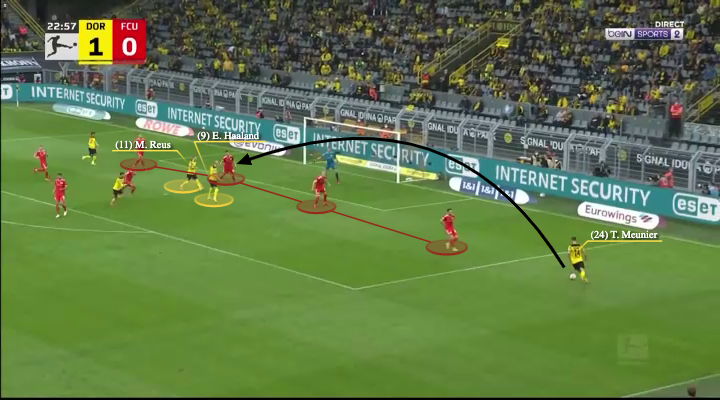 The answer was yellow, which demonstrated Håland’s great sense of movement in the box.

If he went white, yes, it would have been possible to find him but there were two underlying issues. The delivery would be very close to the goalkeeper and Andreas Luthe might catch it. And Håland might find himself offside too.

But since he went yellow, that means moving a bit laterally to avoid being offside, while creating enough time to judge the cross because he was closer to the far post. More importantly, in terms of space, he was with Marco Reus in front of a Berlin centre-back. It became a 2v1 in that area which increased his chance of dismarking the defender. Eventually, he got what he wanted, a header that put the ball into the net. 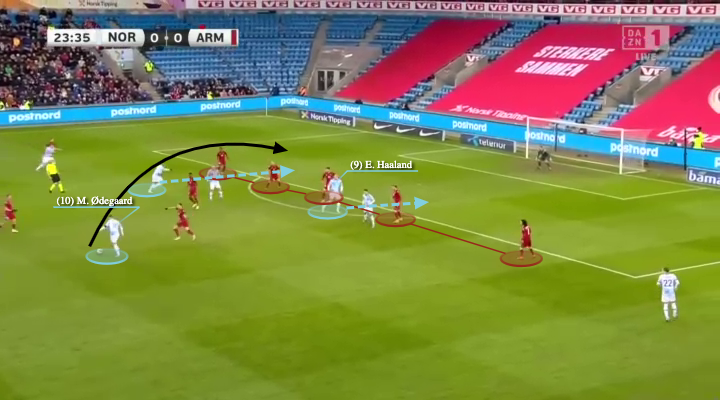 In addition, we also had this example of his opener against Armenia when representing the national team. This would demonstrate how good Håland was when it came to breaking the last line with runs.

Here, initially, when Martin Ødegaard had the ball, Håland already spotted the channel and angled himself for a diagonal run. If the pass was sliced, he would be receiving behind the last line. Note that his body orientation was facing the right flank in this situation.

But Ødegaard had a different idea, he saw Joshua King’s run and tried a lofted ball behind the line. 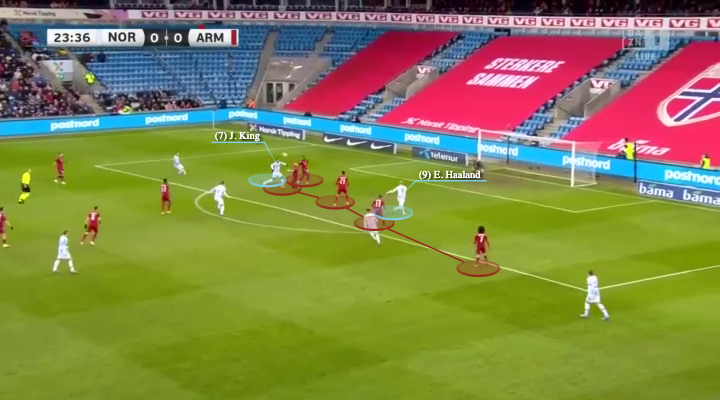 As Håland saw that, in the above image, you could see how quick he adjusted the body angle. Now he perceived the situation on the left side, being able to see the ball and the cross. Since the move was early, Håland already beat the centre-back, becoming a free player for the tap-in if the ball was dragged back to the penalty spot. 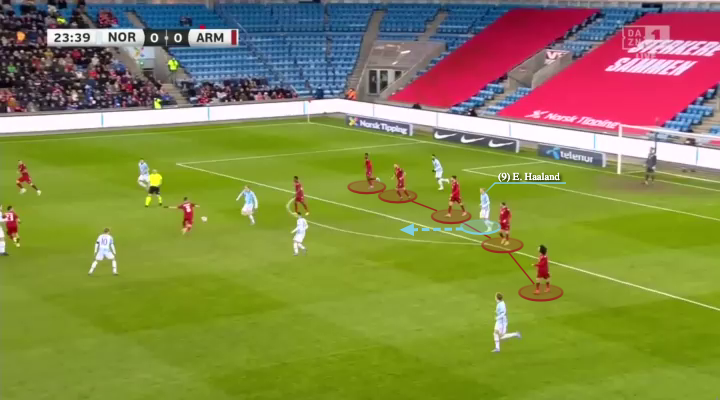 But Ødegaard’s pass was not clean enough for King to set that route. Hence, Håland dropped back slightly to make himself onside again.

In the meantime, Norway players were counter-pressing to try to recover possession. 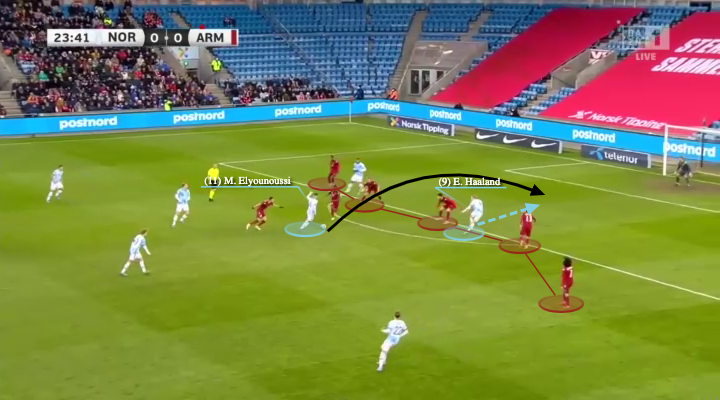 And the little walk from his initial position was very important. The Norway player regained the ball in front of the Armenia box. They had another chance and Håland would not be offside.

This time, Mohamed Elyounoussi was the provider who lofted the ball in. But Håland showed his great perception of the game situation to adjust his body angles and runs as, with this second effort, he did not copy the first one (facing right side). Instead, he faced the left side because the passer was right-footed, and the trajectory of the pass was different.

With all the great work being done before the finishing, Håland received behind the line and converted with great composure.

Håland to adapt without possession

Now you know what Håland is good at – a crazy runner with raw pace and physical quality to attack spaces behind the last line, and also a very competent player who could move into goal-scoring positions naturally, with good ability and techniques to finish.

But some might be concerned by Håland’s output without the ball. Since Dortmund’s pressing was a bit different from City’s, Håland must be able to transform himself to be a better player in this phase. 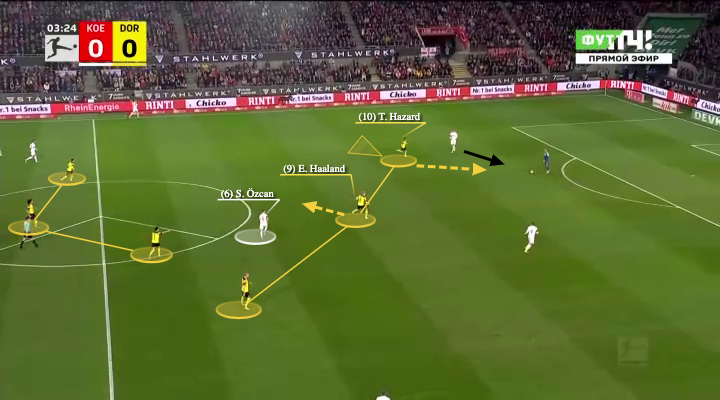 At Dortmund, Håland showed some good examples of his pressing ability. For instance, in this scenario against Köln, he needed to decide on closing the 6 or the centre-back as Thorgan Hazard led the press already.

This time, Håland got it correctly as Rose would not want the pass to go into the centre, and since Håland closed Salih Özcan, the keeper went to the left centre-back.

But sometimes we also saw Håland being a bit impatient and getting caught because of the centre-backs’s deep position when the press is broken from the pass to the 6. So, being more disciplined and careful without the ball, and thinking for the team, would be something needed by Håland in his pressing. 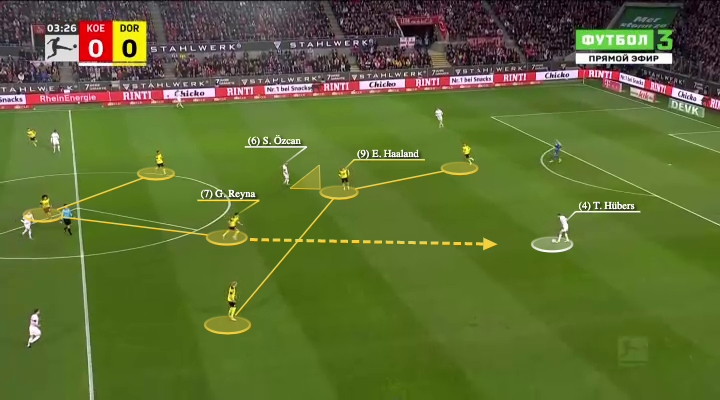 And as a continuous scenario, we also showed that Dortmund sometimes gave Håland an easier role in the press to save his energy for the possession phases. Hence, when the pass was going to Timo Hübers, it was not Håland who jumped, but Giovanni Reyna leaving his position to close the centre-back down with intensity, as Håland just had to cover the opposition 6 for most of the time. 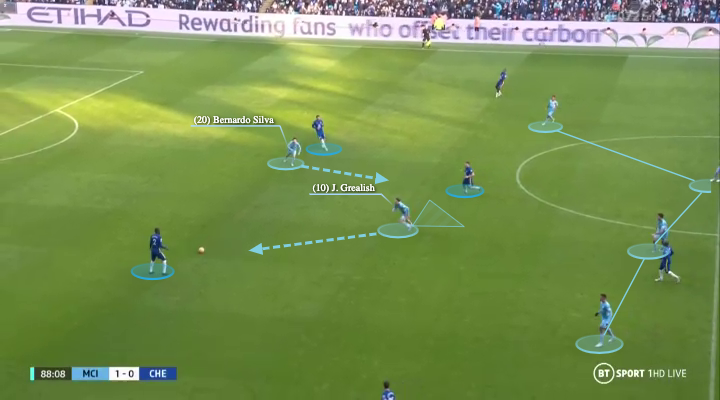 However, at City, there was more “pressing & cover” in the 4-4-2 defensive shape. As we have shown here, Bernardo Silva collaborated with Jack Grealish to push in a 2v3 situation, but with the body angle to shield, they were also preventing the opponents to go into the centre.

That means on Håland’s part, he might need more of that next season. This kind of pressing should not be completely new to him as he had some similar efforts at Dortmund as well, but the intensity of the runs and timing to push must be more careful in general. 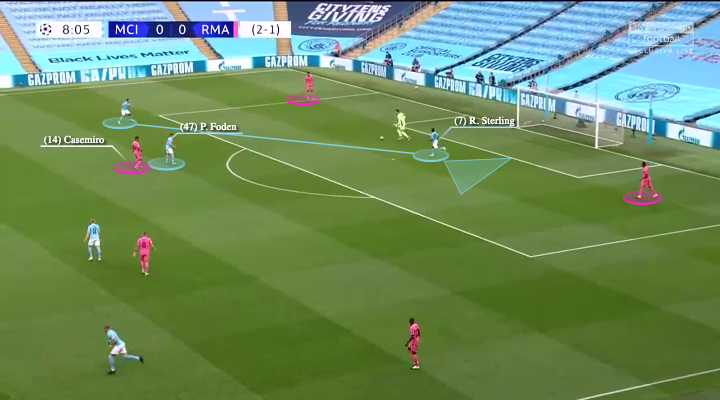 Playing at City, sometimes the task could be more complex without the ball as front players are required to make curved runs for specific intentions without the ball. For example, this was what Raheem Sterling and Jesus were going to do in the Madrid match back in 2020.

In that game, Phil Foden was the striker and he was tasked to cover the 6 – similar with Håland’s role as well. 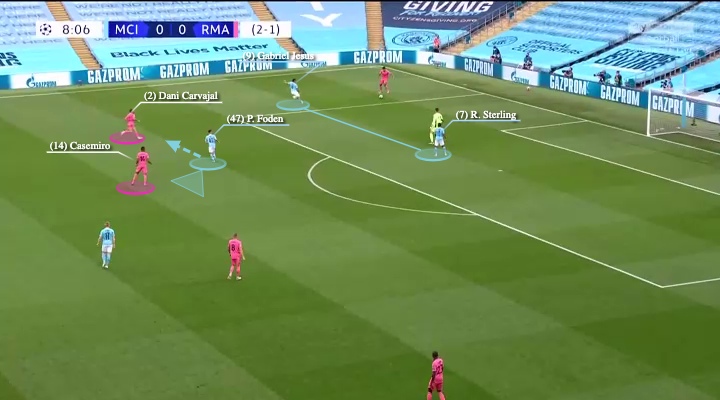 But then, sometimes City required more effort to close the opposition on one side. In the screenshot above, Foden’s role became more complex and required his own judgment and adaptiveness as Dani Carvajal entered the field. Hence, he should move laterally to close the other option because of the Madrid player’s movements, and the covering of the 6 was not dogmatic.

For Håland, he should also make some runs to defend in these situations, sharing duties with Kevin De Bruyne.

When City were in possession, their striker, or false-9 was not really what Håland was good at. This season, Grealish, Jesus, Sterling, and Foden all had experiences as the forward man, but most of them were not staying there as they played in space to obtain a more stable structure in the construction. 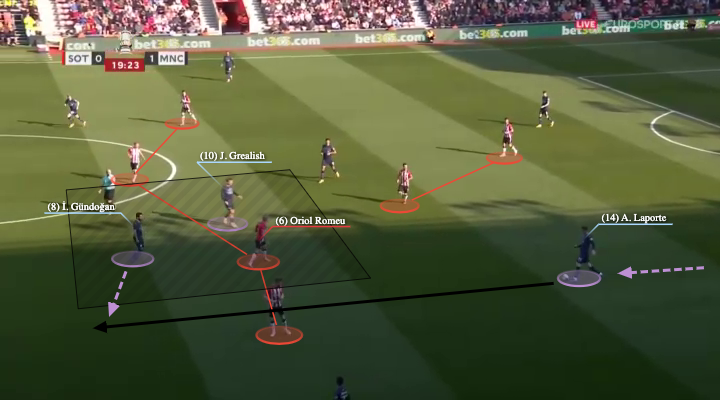 For example, Grealish started in big games against the likes of Liverpool as a striker, but he never stayed on the shoulder of centre-backs and made runs behind. Instead, he joined the midfield to maintain close connections with teammates, or be the additional man to overload certain areas on the pitch to help with ball progression.

Here, against Southampton in the FA Cup, Grealish played very deep or even in the parallel zone with the 8s. As he joined the midfield, suddenly Oriol Romeu had two players around him and he moved narrower to close Grealish, leaving İlkay Gündoğan free to receive the ball in the midfield play. 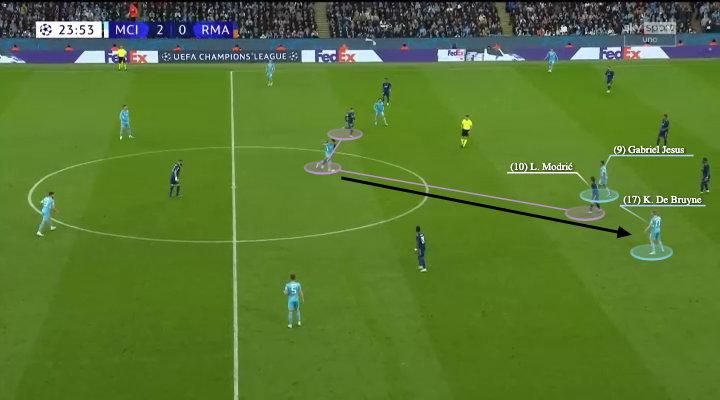 Even though Jesus sounds like a more natural 9 under Guardiola, he was not always doing the same runs behind. Instead, one part of the Brazilian being usually neglected was his ability to drop into spaces, as he formed that 2v1 overload with De Bruyne on Luka Modrić, very similar to the work between Gündoğan and Grealish previously, so one option would be on in the attack.

But Håland should not be expected to stay this deep because that was not natural. He should be closer to the penalty box and making the runs or meeting the deliveries in good positions. 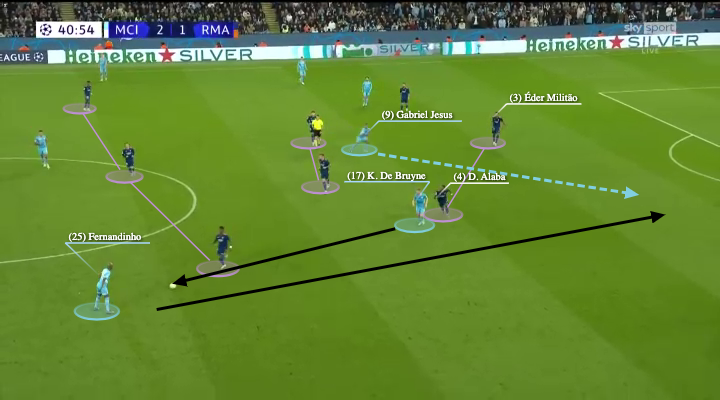 With Jesus, City had more intensity and capacity to run behind the last line centrally, as shown in the above image. But the starting position of that run was still spaces between lines. Would Håland do something similar in terms of positioning? Or would he simply have just stayed and occupied the centre-backs, and gone behind from a higher starting position? We will have to wait for Guardiola to give his own solution. 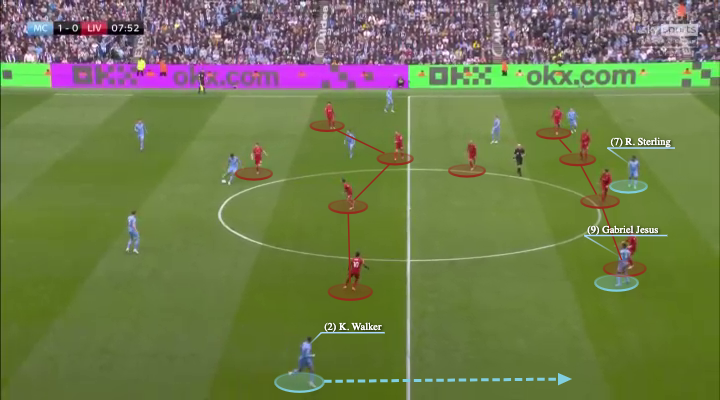 Håland would probably not be able to be forced into playing in spaces centrally or between lines, because in the Liverpool game, City showed their ability to use quick and aggressive runners to attack a high line.

For example, the front three was very narrow in the above image and their striker, Sterling, was even staying offside in the construction phases, because he just had to be in a position to receive when the attack was bombing from the outside. So it really depended on which player City had, the matching, and the chemistry of players.

Håland is definitely carrying the potential to be the best player in the next generation. He is strong, quick, physical, aggressive, and a very natural goal-scorer. But at his new club and with Guardiola, things will not be that one-way as football is a team game. They do not separate the attack and the defending, and so we should expect Håland to improve his level of detail and understanding in different aspects to fit into his new club, while City should also evolve with new tactics to make good use of Håland, because every player was unique.