Under Vitor Pereira, Corinthians have been, if anything, inconsistent. Despite promising moments, such as their 2-0 win over Boca Juniors, they haven’t won in the last five matches. To make matters more frustrating, their last two matches have included two draws against significantly weaker teams in Always Ready and América Mineiro. Vitor Pereira’s men have hit a roadblock, with their star players unable to perform. Technical and tactical references, such as ex-Chelsea Willian, ex-Barcelona Paulinho, Renato Augusto, and Róger Guedes have failed to perform in the last few weeks.

These individual struggles symbolise a larger collective problem: Vitor Pereira has failed to adapt to his players. The Portuguese’s positional play and space-oriented tactics have not been effective with the players at his disposal. While this style of play has proven to be successful throughout the world, it does not fit this current Corinthians squad.

In this tactical analysis, we will examine the tactics Vitor Pereira has tried to implement and why it hasn’t worked. In addition, this scout report will look at how teams have been able to completely nullify Corinthians’ attack with man-marking systems.

There are many aspects that have defined the Portuguese’s time at Corinthians. First, his inconsistency with the starting eleven has been a controversial topic. The Brazilian calendar is notorious, even more so in a year where every competition has been compressed due to the World Cup at the end of the season. As a result of this, Vitor Pereira has publicly stated multiple times he does not have a favourite eleven and will rotate his side every match to maintain the desired intensity. Three months in, he has never repeated the same starting eleven.

While this is perfectly understandable, it undoubtedly has negative effects on the team. The lack of consistency in the squad has resulted in players lacking chemistry and familiarity with each other. This consequence has hindered the effectiveness of Pereira’s tactics, as they are very demanding collectively.

Although the players have constantly rotated, the formations have been rather consistent. Most commonly, he has opted for a 4-3-3. Due to injuries and other necessities he has also used a 3-5-2, though the playing style and principles do not change. These principles have defined Vitor Pereira’s style as this analysis will now examine.

Like Pep Guardiola, Vitor Pereira adopts a fluid, positional attack, built around the distribution of players throughout defined spaces. In this system, the formation used is not as important as the correct distribution of players throughout the pitch. The image below illustrates a rough sketch of the grid used in this system, divided vertically and horizontally. 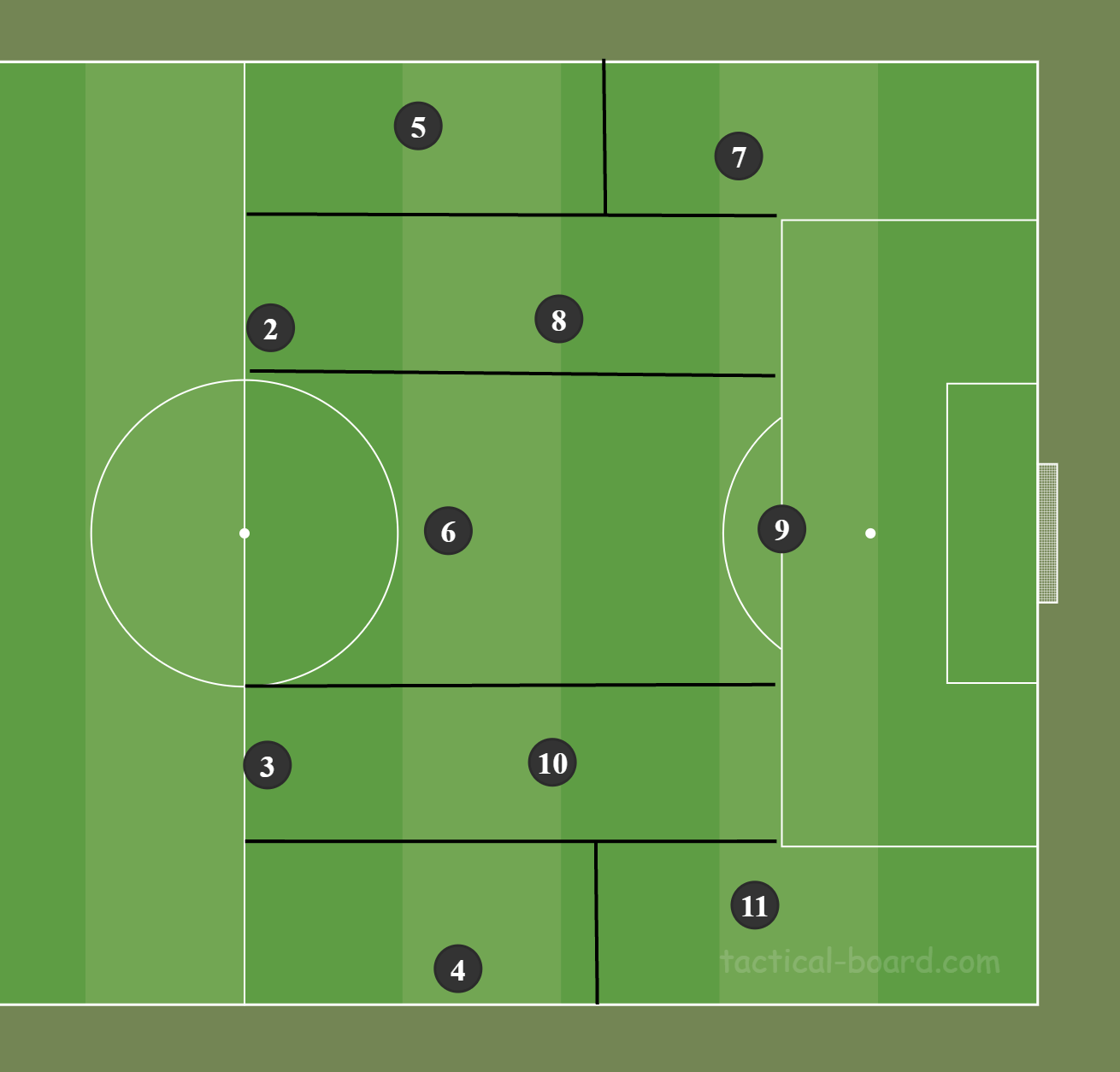 One of the most important aspects of Pereira’s system, as he has stated publicly multiple times, is width. He wants his team to maintain maximum width at all times. This is done by always having at least one player in each wing at all times and the three midfielders being evenly distributed vertically. The image above also highlights the wide overloads. A consistent pattern in Timão’s possession is attacking the wide areas.

The importance of width in Vitor Pereira’s tactics can be further illustrated in their pass map against América Mineiro. In this match, the Time do Povo had 59.43% possession and their attacking tactics/struggles were emphasised. The centre-backs are significantly distant from one another. Additionally, there is a concentration of players on each side with just some of the midfielders centrally. 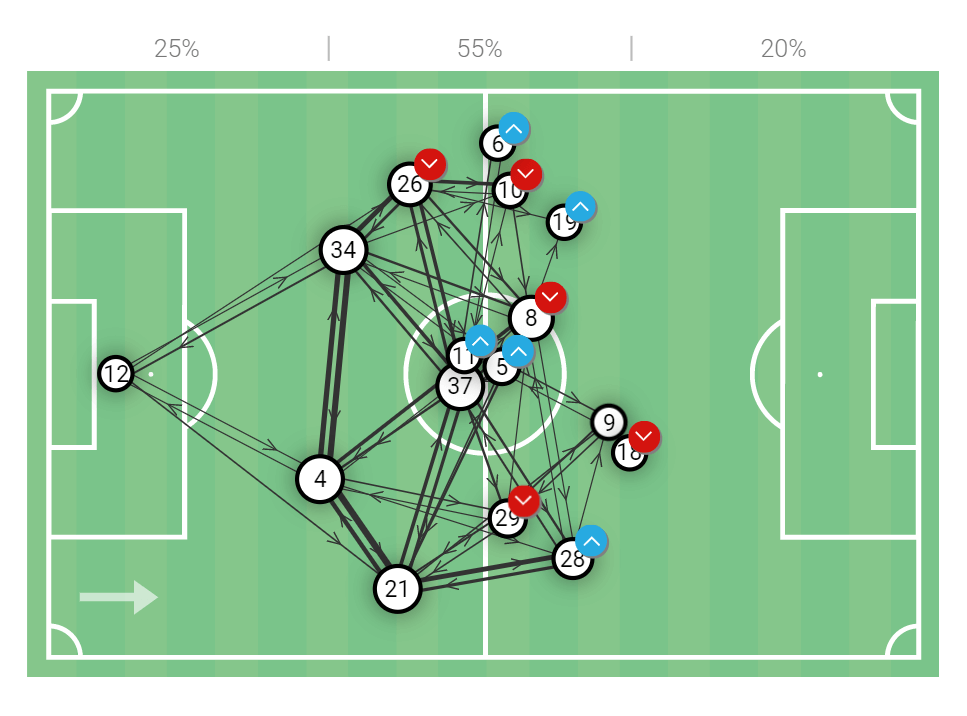 After understanding some of the pillars of this system, we can now look at the behaviour of the players. In this system, the where is far more important than the who. For instance, there must always be one player in the wide channel, but it does not always have to be the fullback or winger. This allows for a fluid system where players are constantly interchanging positions and roles. In the image below, we can see a line of five maintaining both width and depth.

Both the right-back and right-winger, Rafael Ramos and Róger Guedes respectively, have drifted inside. As a result, midfielder Renato Augusto shifts wide to occupy the wing. As Guedes comes inside, centre-forward Junior Moraes drifts to the left half-space. 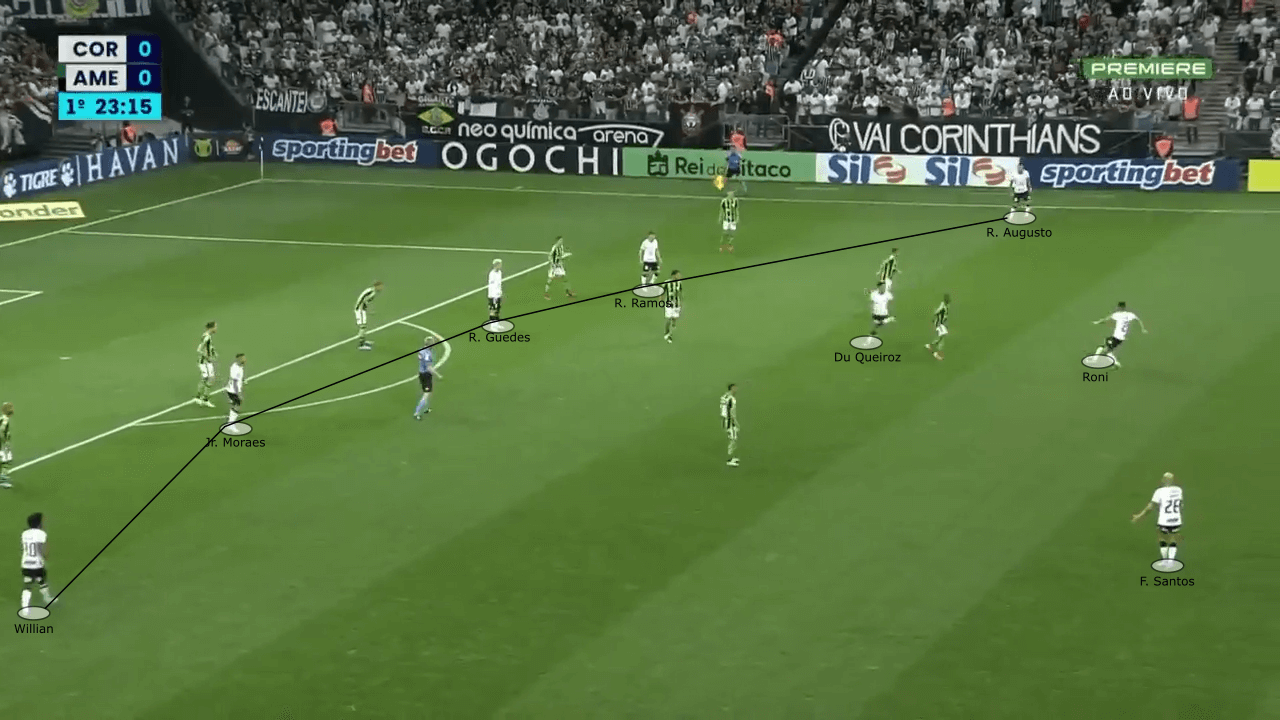 In their build-up, this rotation can be further illustrated. The two centre-backs split the goalkeeper while the fullbacks advance wide. Rafael Ramos, the right-back, is more attacking and tends to push up higher. In order to cover for this, Renato Augusto replaces Ramos’ space. 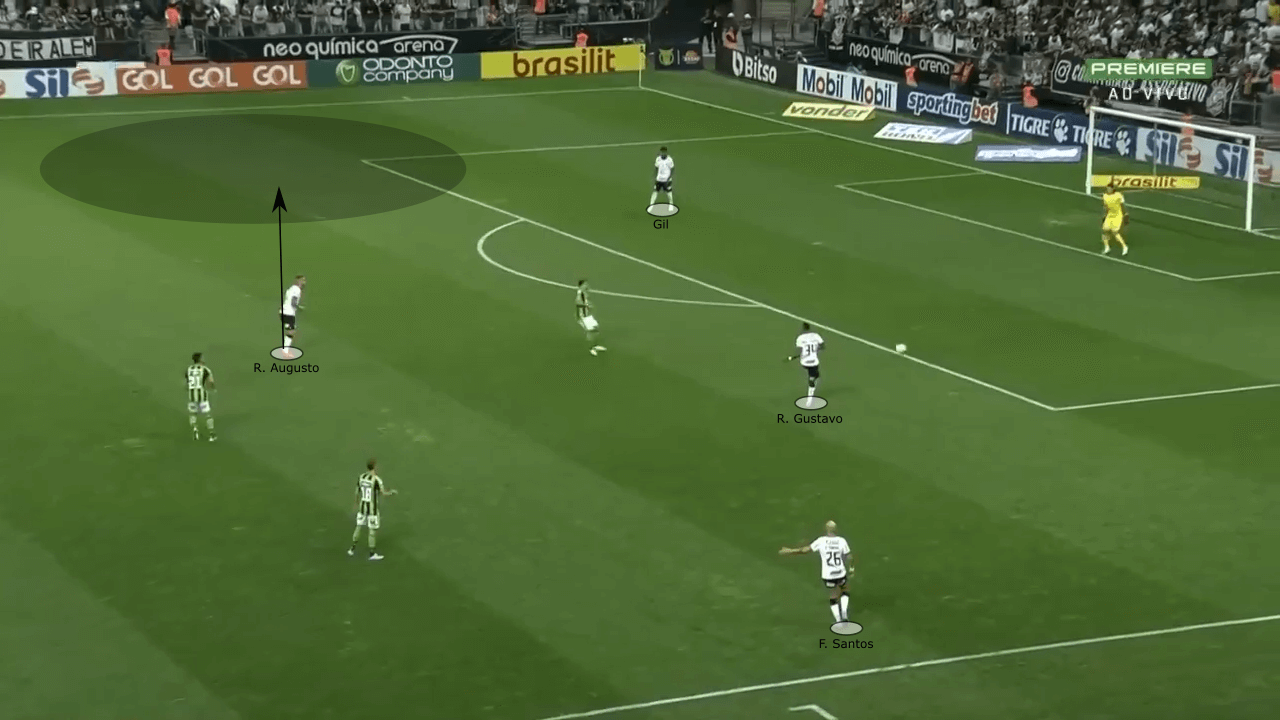 As soon as Renato Augusto moves to the right-back position, Du Queiroz drops in from deeper to occupy his space. This highlights another characteristic of the midfield trio. While Renato tends to be the more advanced player, they are constantly rotating roles and positions. 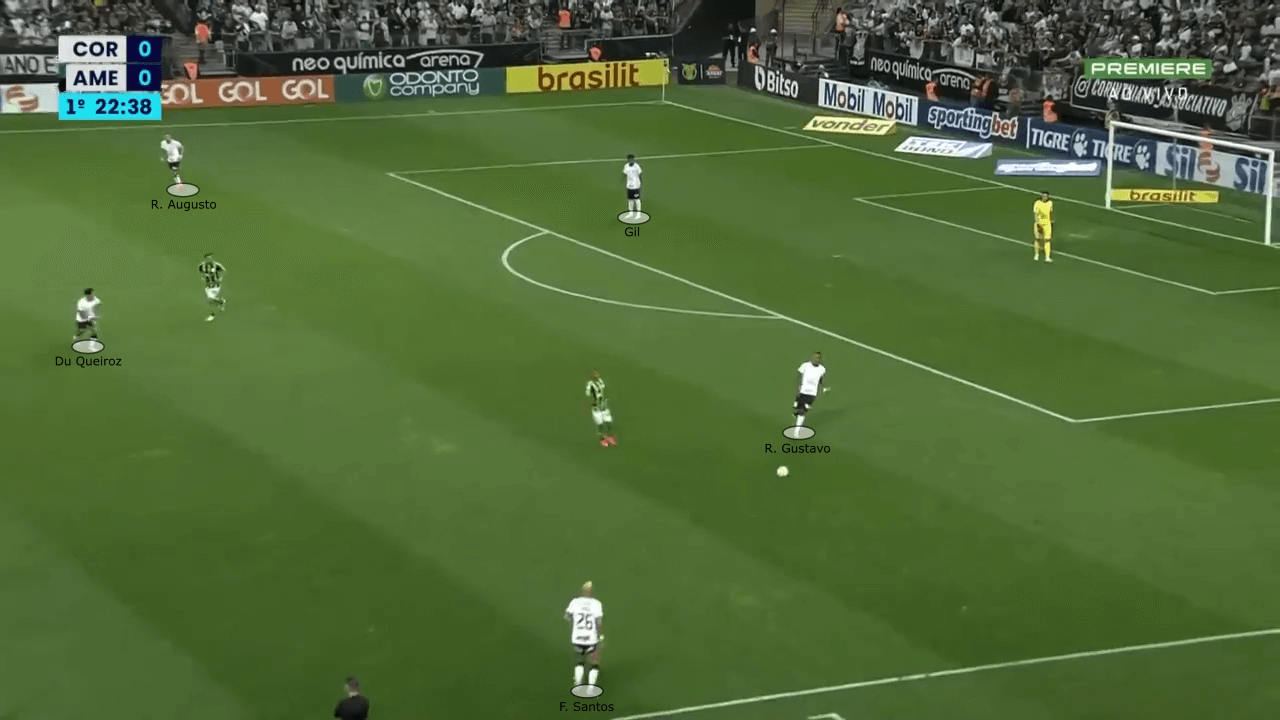 This constant aim to expand the pitch in possession has almost become blind. As soon as the team gains possession, players immediately try to get organised. At times, however, the scenario may call for something different. The segment below is an example. Once Renato receives the ball in the midfield, Willian immediately starts to run wide, away from Renato. He does this in order to drag the defender away and create width. While the intention was good, it may not have been the best decision. Quickly combining with Renato and using his speed to explore the counterattack may have been more effective. 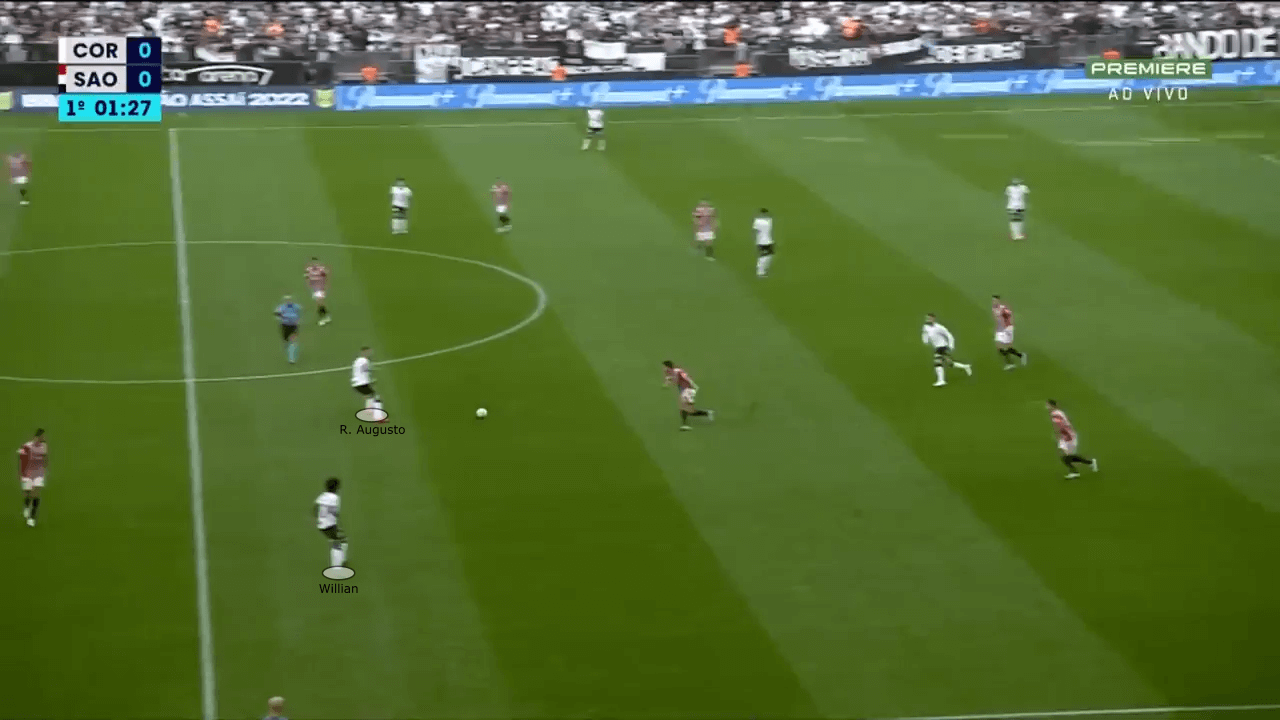 Renato is able to turn, but significantly slows down the attack and allows for the opposition to recover. Willian is tightly marked and unable to receive the ball. Renato is left alone in the midfield with no teammates nearby and consequently loses the ball. 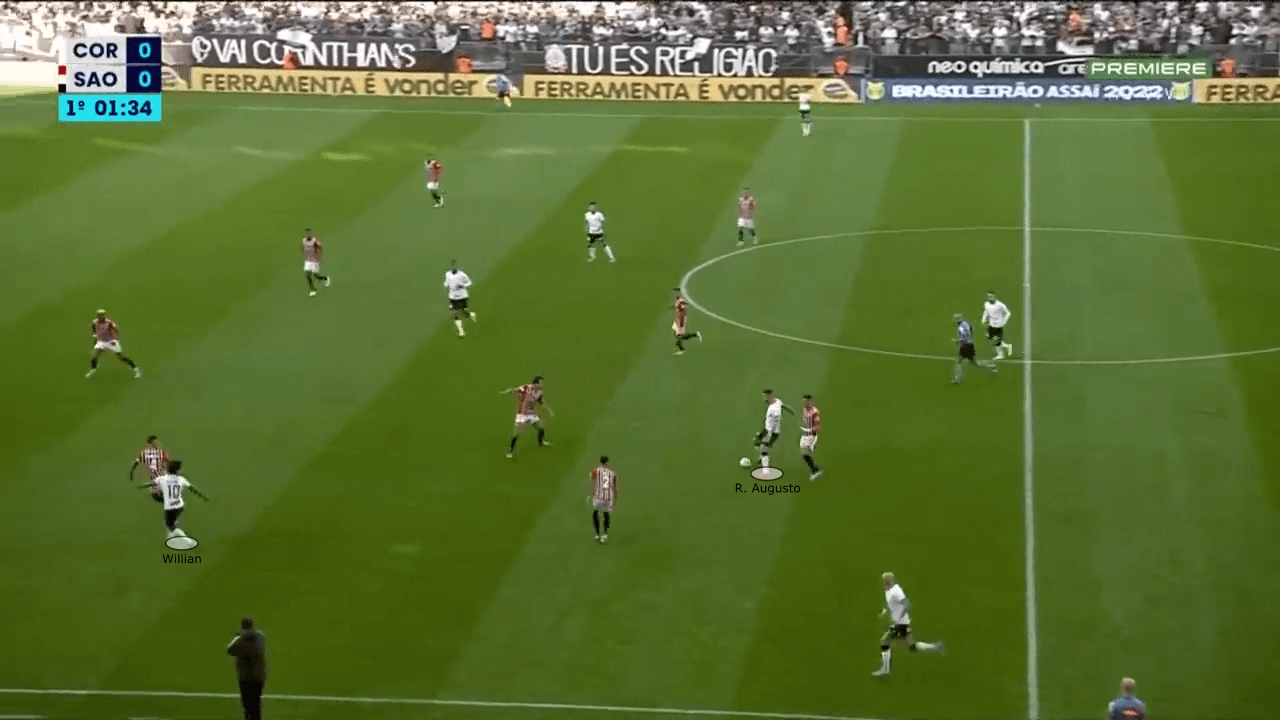 How it has failed

This style of play has undoubtedly proved successful amongst the world’s best, most notably Guardiola’s Man City. Unlike City, Corinthians do not have world-class players. It is a very demanding system, requiring a high level of tactical intelligence and constant focus. While the positioning of players is often correct according to the grid, it lacks the necessary movement. It is not enough to stand in the given space and wait for the ball. Constant movement and interchange of players are required in order to disorganise the defensive organisation and construct effectively.

The quality at Vitor Pereira’s disposal is simply not good enough for this system to work. Against Palmeiras, Corinthians suffered a humiliating 3-0 loss to their biggest rivals. In possession, it constantly felt like Timão had fewer players. In their build-up, for example, the players were too distant from one another, unable to effectively combine and progress through the zones. 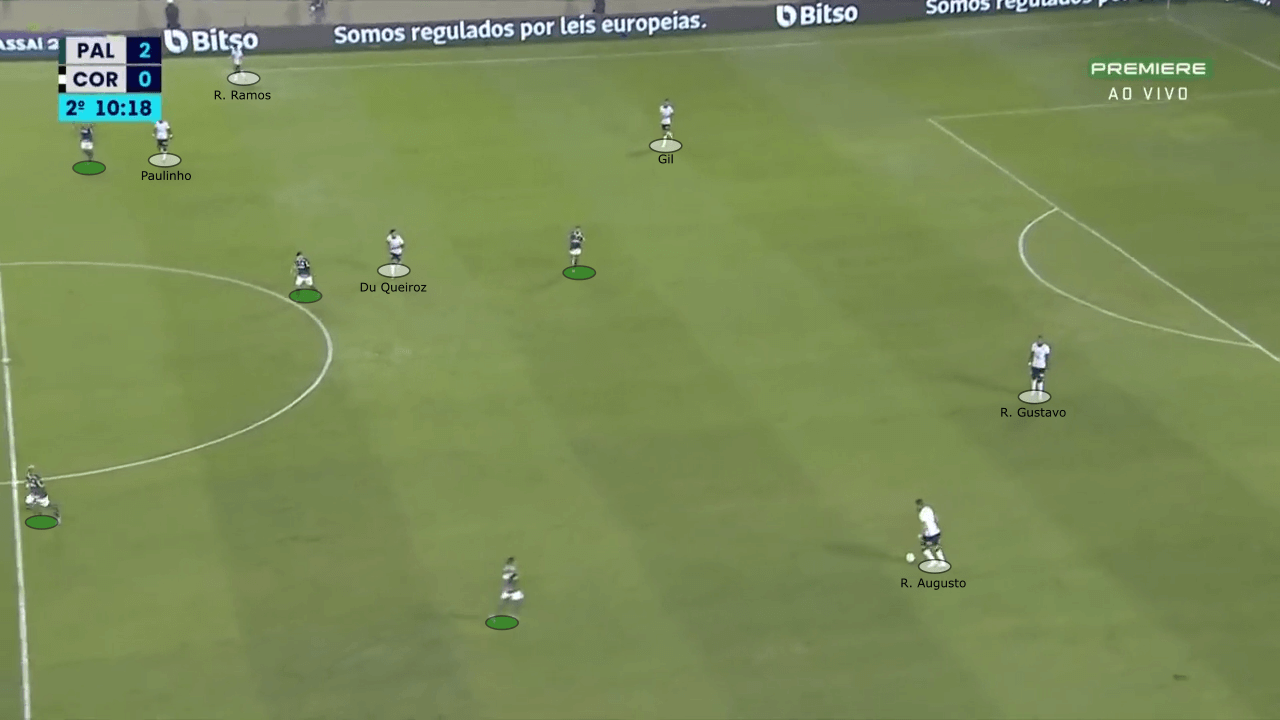 Now in the final third, the same problem can be seen. The players are evenly distributed across the pitch, but they are simply standing still. As Lucas Piton drives inside, he has no passing options. The massive hole in the midfield further emphasises this problem. 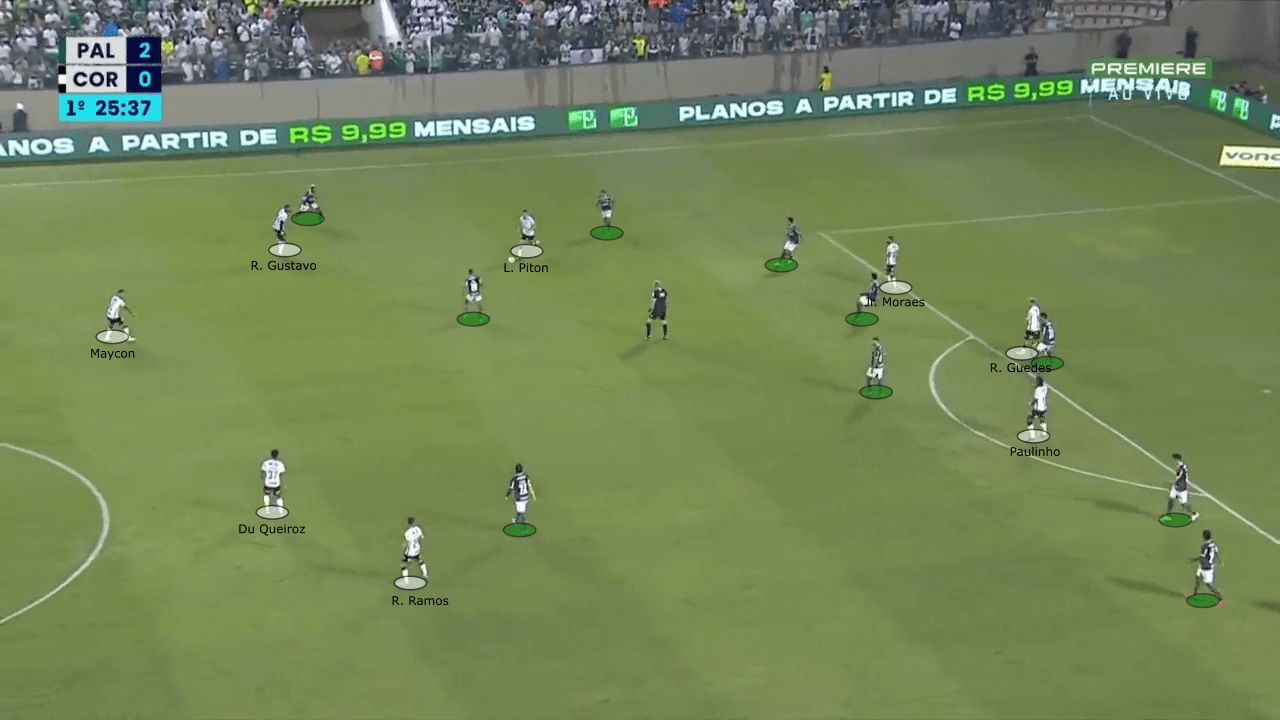 Below, as Du Queiroz drives forward, there are no available players. Each player is tightly marked, but more importantly, there is no movement amongst them to make themselves available. As a consequence, Corinthians have become very predictable and easy to defend. 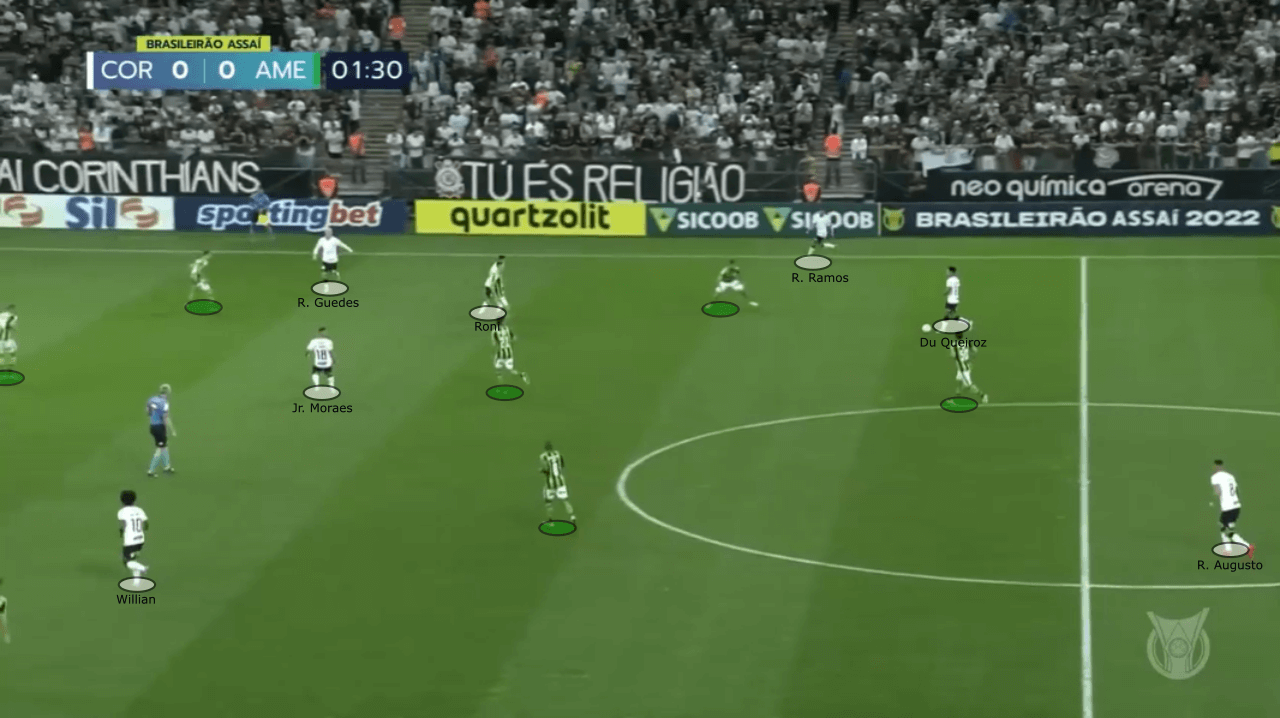 Another example of this struggle to construct attacks can be seen against Palmeiras once again. As João Victor looks to progress the ball, each player is tightly marked. He is then able to find Junior Moraes, checking in from the last defensive line. In order to play with his back to goal, a centre-forward must have teammates nearby to combine and retain possession. After receiving it, Moraes has absolutely no players around him and consequently loses possession. 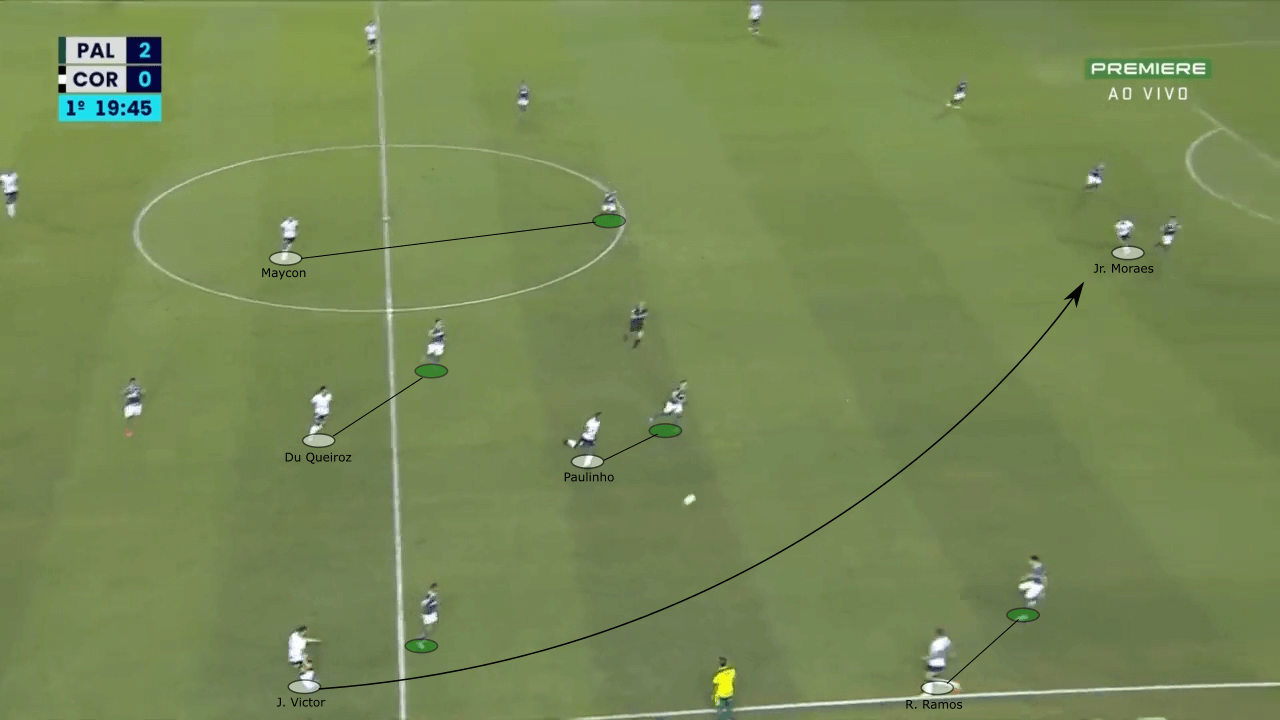 A common trend in recent matches has been Timão’s inability to create chances against man-marking defences. More and more frequently are teams choosing this defensive organisation against Corinthians due to their predictability and lack of movement off the ball. In matches such as their embarrassing 3-0 defeat to Palmeiras and their frustrating 1-1 draw against América Mineiro, man-marking systems completely nullified Corinthians’ attack.

As we have seen, Timão’s organisation in possession aims to expand the pitch. As a result, players are very distant from one another. In addition, the players’ movements are not coordinated and frequent enough to disrupt defensive organisations. This is specifically true in the build-up, for example. After Palmeiras’ Rony splits the centre-backs below, Raul Gustavo begins to drive forward. As he looks for options, Corinthians’ midfield is tightly and individually marked. Other players are distant and offer no support. 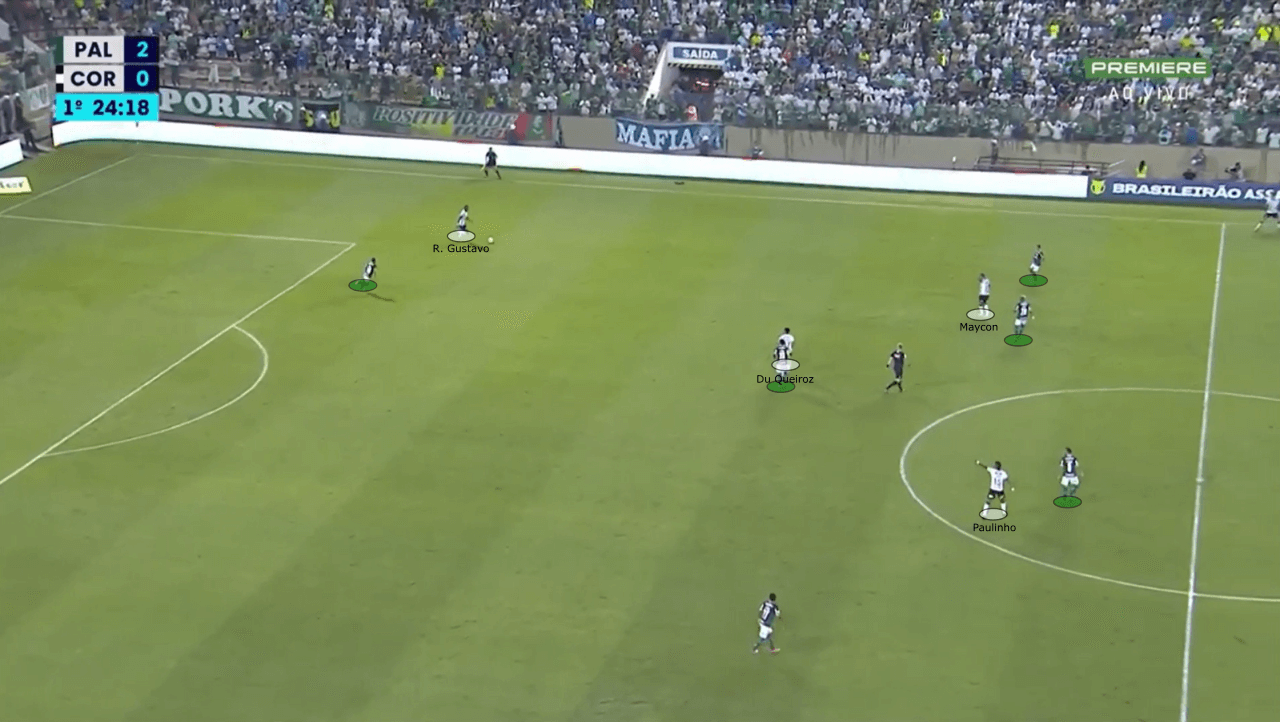 As their structure is extremely predictable and static, a simple man-to-man system easily eliminates all passing options. In the image below, Maycon dribbles towards the middle with no passing option. Not only are all players tightly marked, but they are also fairly distant. He chooses the long switch to Piton, who is immediately challenged and loses possession. 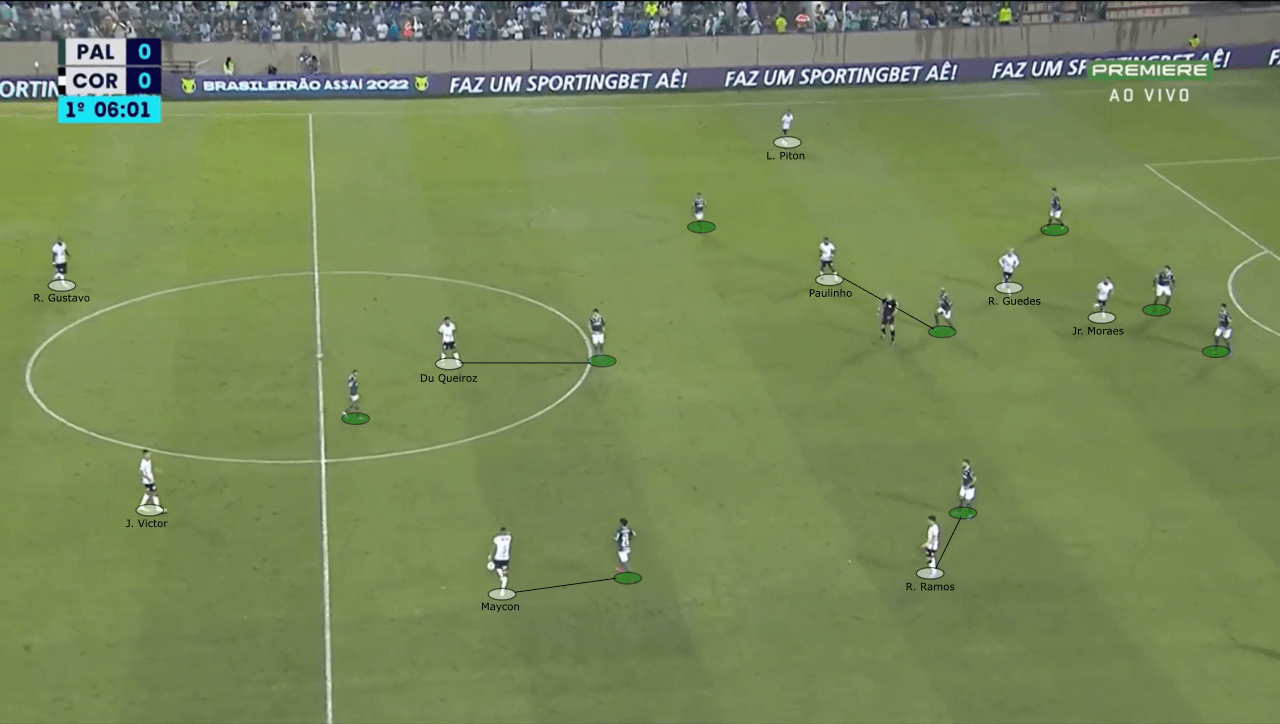 Even against teams with a zonal-marking system, they struggle for similar reasons. São Paulo’s zonal-marking defence, for example, almost looks like a man-to-man defence due to how slow and static Corinthians’ players are. 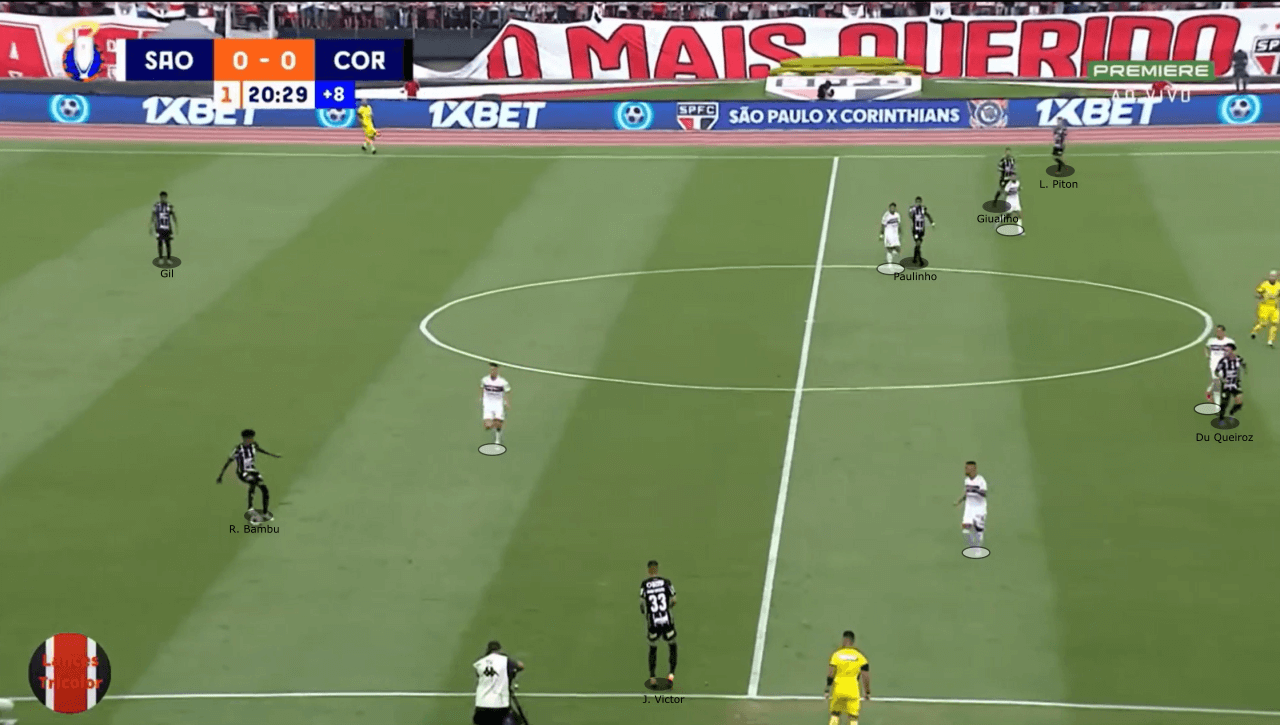 The intensity Vitor Pereira constantly refers to is not traditional out of possession pressing, but rather the constant movement off the ball that is required for this style of possession to work. Due to the quality of players at his disposal and the lack of familiarity as a result of the inconsistency in the starting eleven, Vitor Pereira’s tactics have been far from efficient at Corinthians. In order to evolve and get the most out of his players, the Portuguese manager must adapt. Positional play, with the current circumstances, is simply out of reach for Corinthians.

With the Copa Libertadores Round of 16 coming up at the end of June, Pereira has a few matches to get Corinthians back on track. If not, the Portuguese’s continuity and stability may begin to crumble.