Luca Netz is an 18-year-old German left-back currently playing for Borussia Monchengladbach in the German Bundesliga. Netz joined Monchengladbach this previous summer for a fee equivalent to £1.8 million from Hertha BSC. It was perhaps surprising to see Netz leave Hertha so easily this summer, and according to the left-back himself he turned down clubs such as Manchester City. He has hit the ground running this season with Adi Hutter’s side instead, and has rightly gained plenty of plaudits for his performances. Netz has been a regular in the u21 national side, and it likely won’t be long until he’s knocking on the door of the senior team.

This tactical analysis and scout report provides an analysis of Netz’s most interesting attributes whilst giving an overview of how he fits in with Monchengladbach’s tactics.

Netz has played as a standard left-back on a number of occasions this season, however, he has predominantly played as a wing-back, and his heat-map (shown below), backs this up. Nevertheless, it is still quite striking as to just how much action Netz has in the opposition half, with clearly more touches made in this area rather than inside his own half. It’s also interesting to see how there is a fair amount of action in the corner of the opposition 18 yard-box, testifying to just how far forward Netz will push for Gladbach. 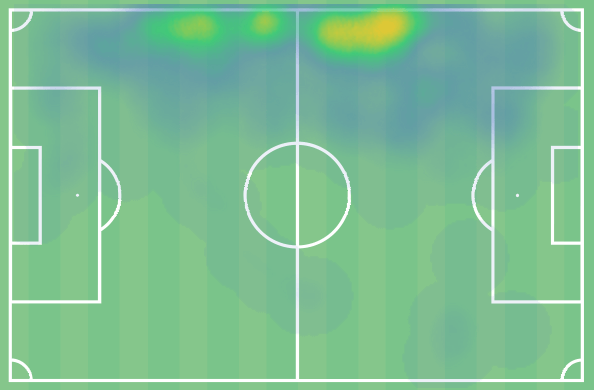 Netz is given full autonomy of his left flank in attack and is expected to push forward in attack. He can provide with and stretch the opposition back line, but equally we can see him take positions like the one in the image below with relative frequency. Netz is confident pushing into positions inside the opposition 18 yard-box, and whilst he hasn’t scored yet this season he is a threat on goal, averaging 1.55 shots per 90, hitting the target with 37.5% of these. 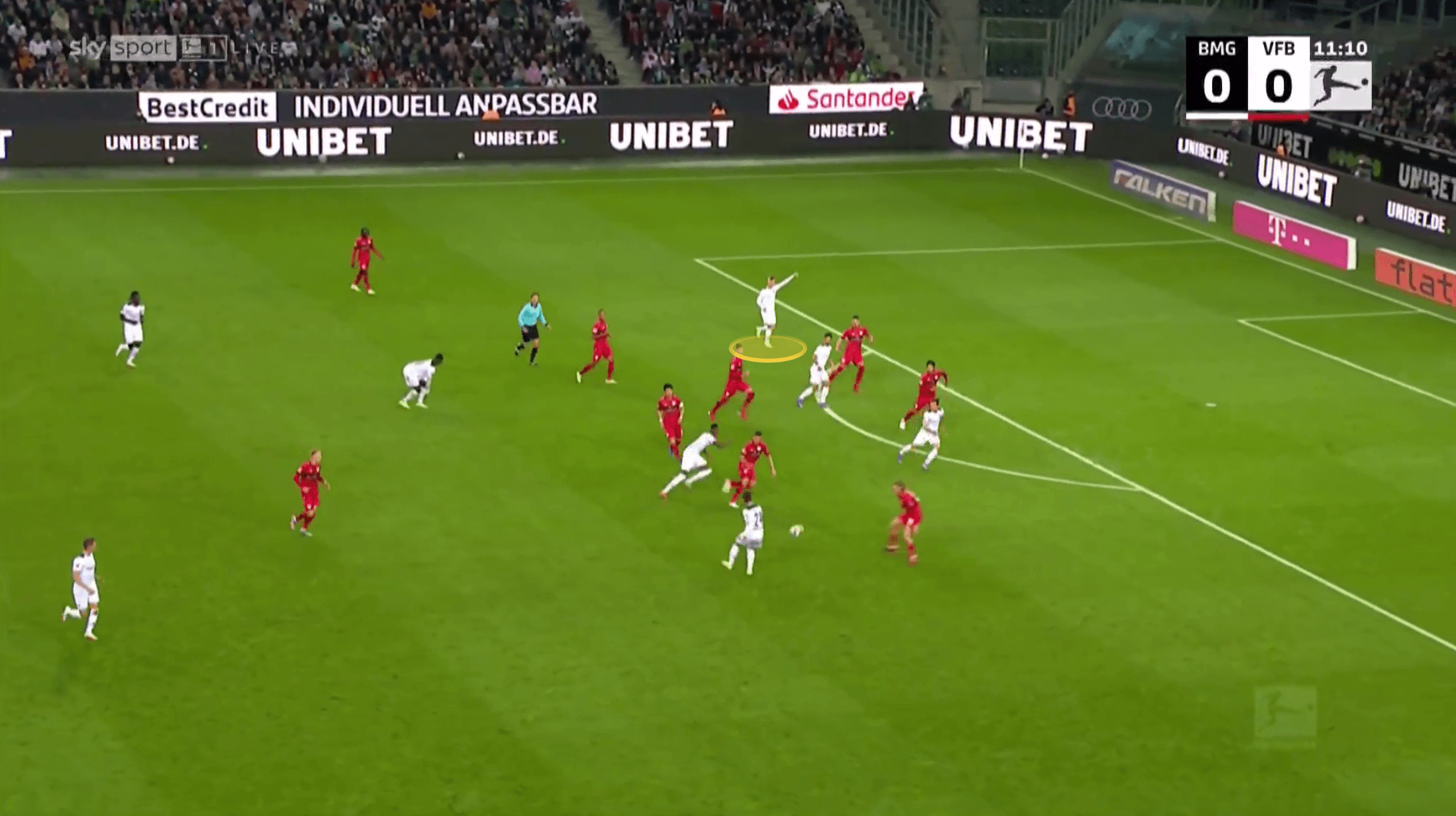 Netz is clever with his movement, and whilst in the image below he plays close to the shoulder of the inside defender, he does this because he’s looking for the ball in behind. However, Netz will also vary his positioning by making a late pull out away from the defender. He will recognise the moment to do this, such as his team circling the ball from the right side to the left when camped outside the opposition 18 yard-box. We can see this occurring in the next image where he sees the pass coming across goal and instinctively pulls off from the defender, taking several steps away from the centre of the pitch and arcing his run to stay onside. In doing so he can receive a pass across his body, away from the defender, and shoot off of his first touch if he desires with his favoured left foot. 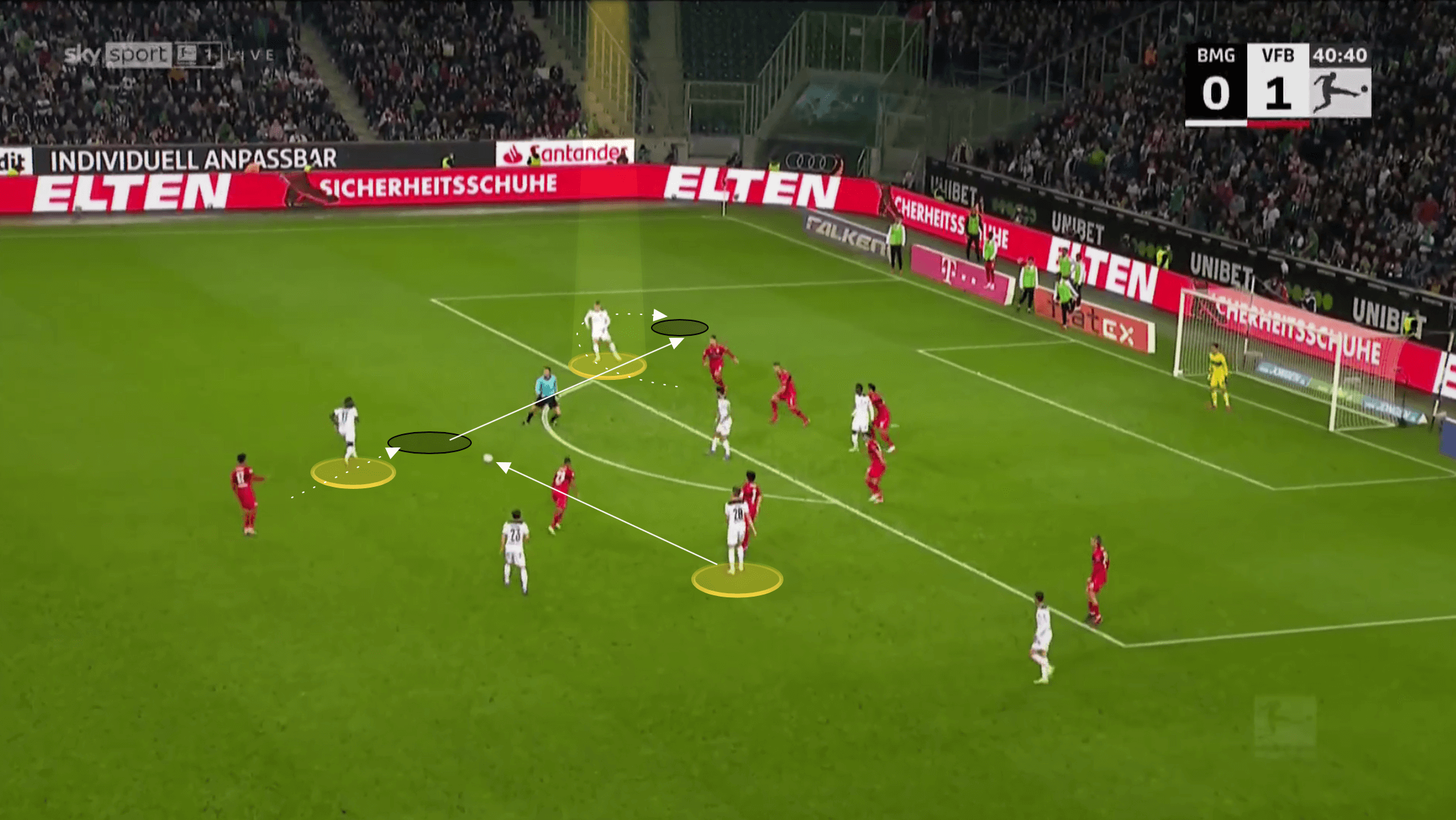 Netz doesn’t always start in this high position though, and will often make a late run from a wider starting berth. Whilst he provides width in build-up Netz will move forward with the ball. If he sees his teammates driving forward, particularly in the left half-space where they are likely to narrow the opposition full-back, Netz will make a late overlap. He generally looks to receive the ball in behind where he may look to shoot or maybe pull the ball back for a teammate, but also potentially delay possession and find a pass. He doesn’t regularly look to cross though, with just 0.97 crosses per 90 this season (albeit with an impressive 40% completion). 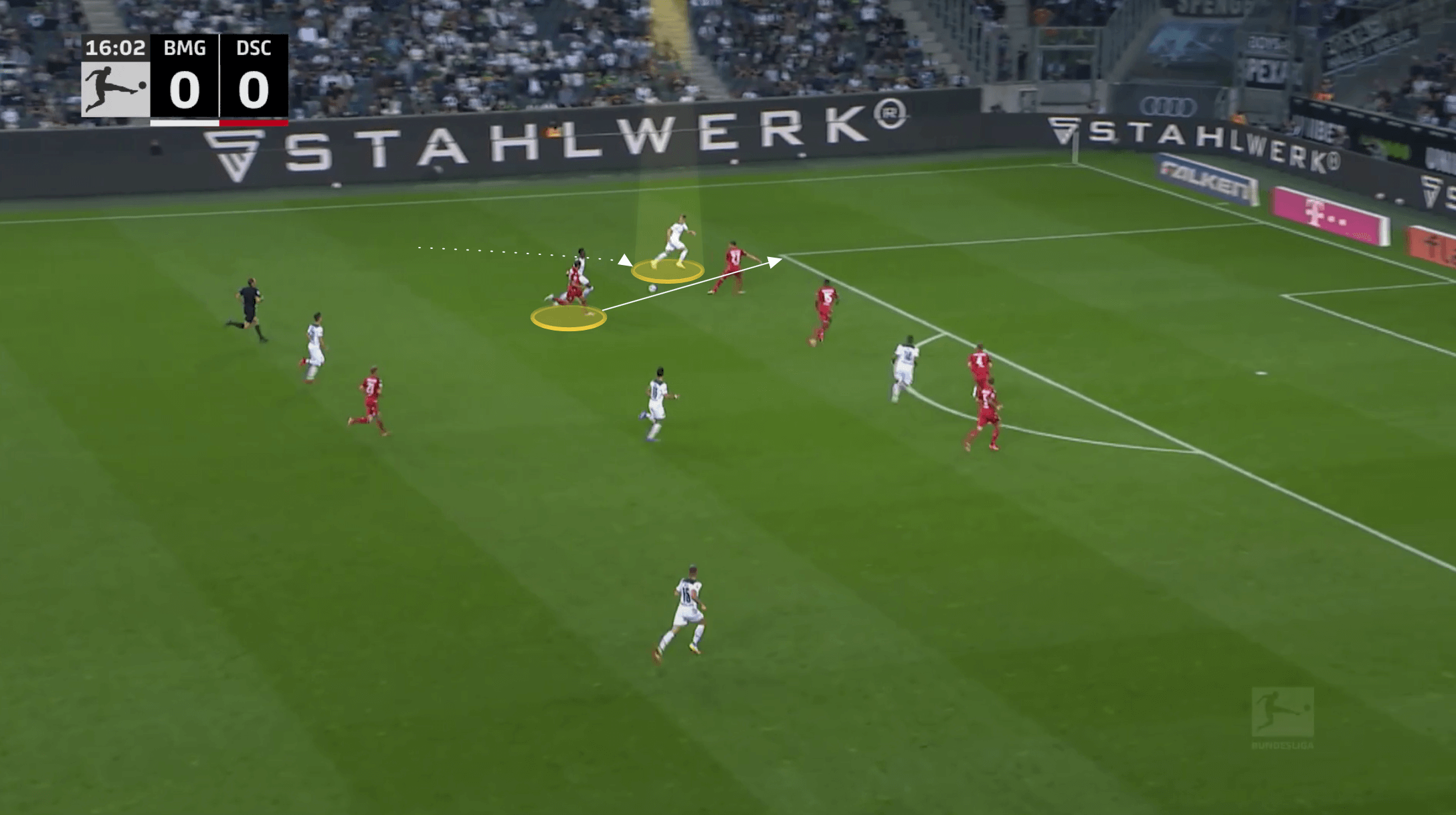 Netz shows composure inside the area when in possession and isn’t the type of wing-back to just drive to the byline and cut the ball back every time. He is a highly competent dribbler and is comfortable being in possession when under pressure. He can beat an opponent inside the area but also shows a cool head to get his head up and find a pass through a tight gap. 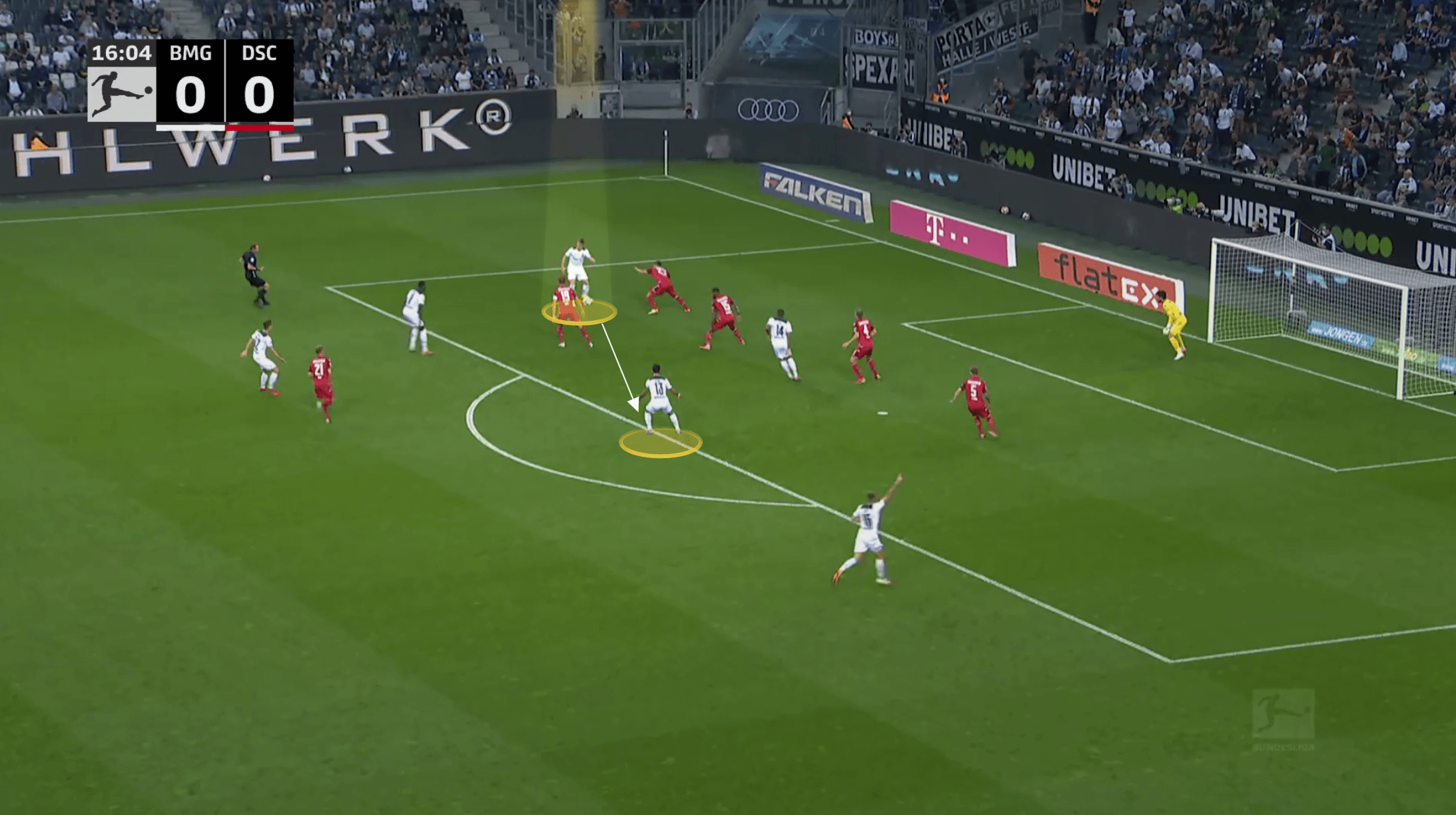 Despite his high positioning in many attacks, Netz shows terrific effort to track back at pace and doesn’t neglect his defensive duties. He recognises the turnover of the ball incredibly quickly, often anticipating it happening and drops back quickly into shape. 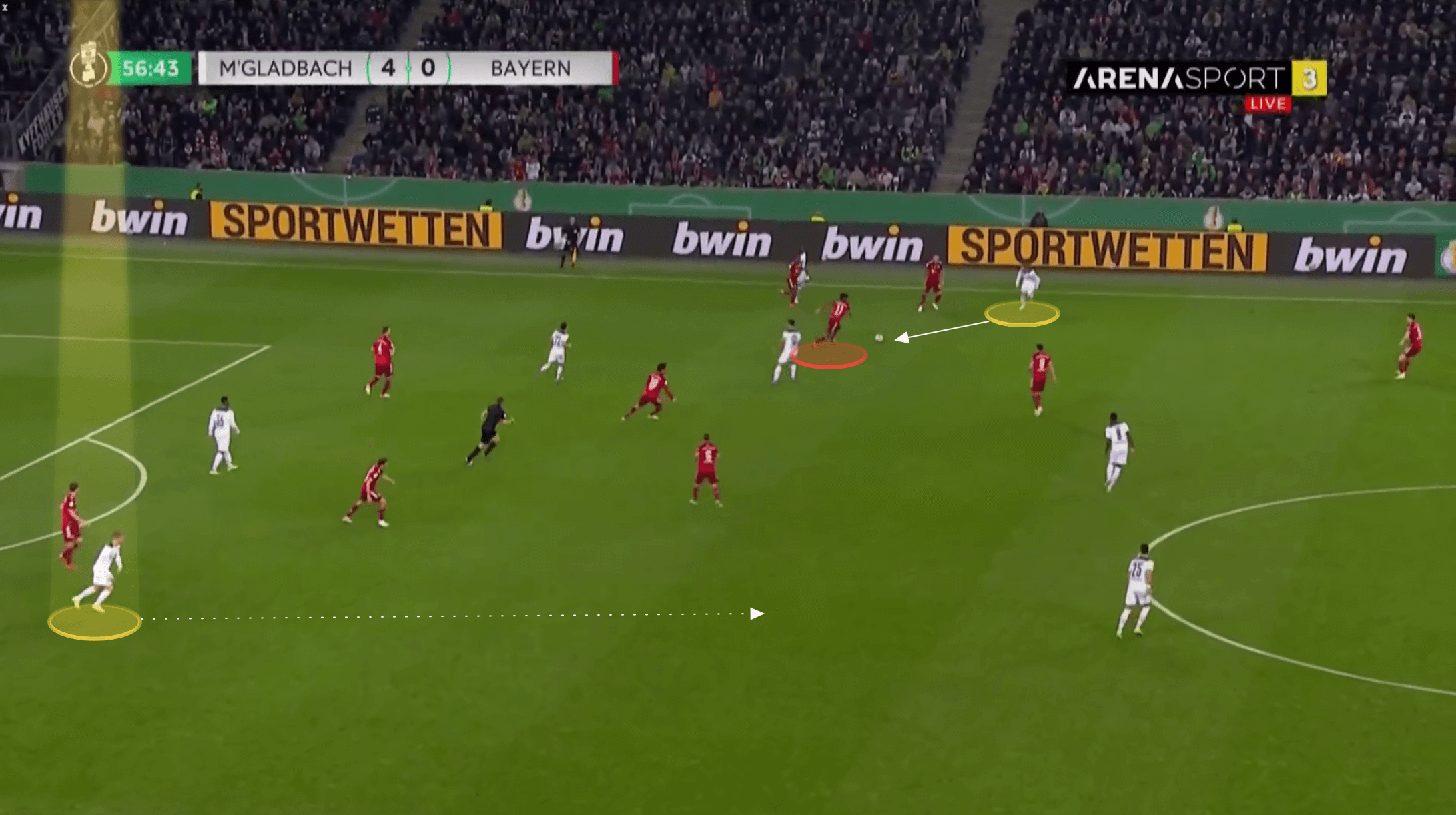 The example shown in the previous image and the one below is a perfect example of this, with the two frames occurring within four seconds of one another. Netz recognises the loss of possession quickly and immediately drops back, however, as we can see before he gets back at such a pace that when he intercepts the loose ball he has to check back on himself and is already facing the opposition goal once in possession. 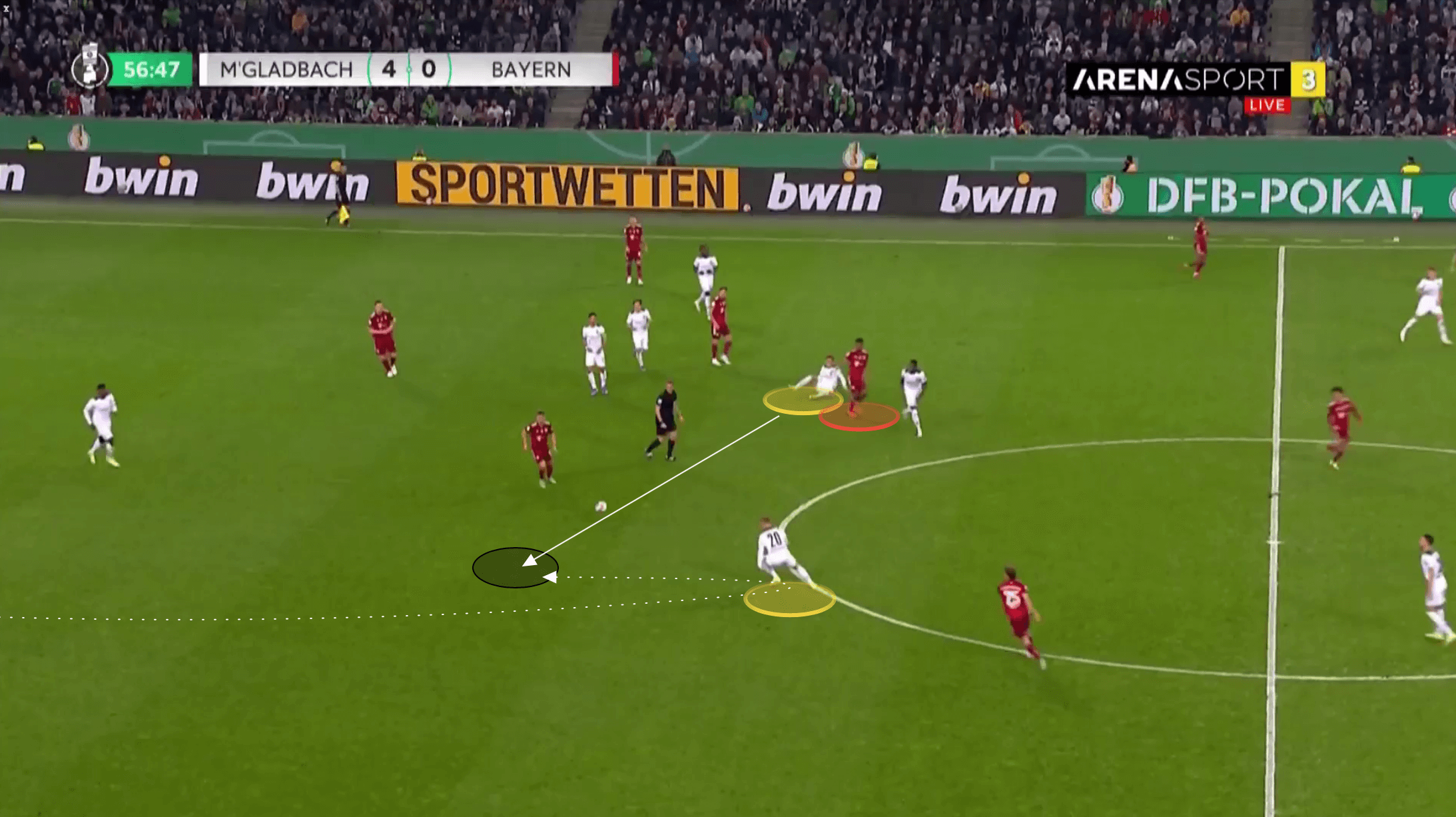 Netz is a composed individual on the ball. During build-up play he gets deep and wide and stretches the opposition press. If in a more narrow position, particularly without an already open body position, he regularly scans before receiving the ball. 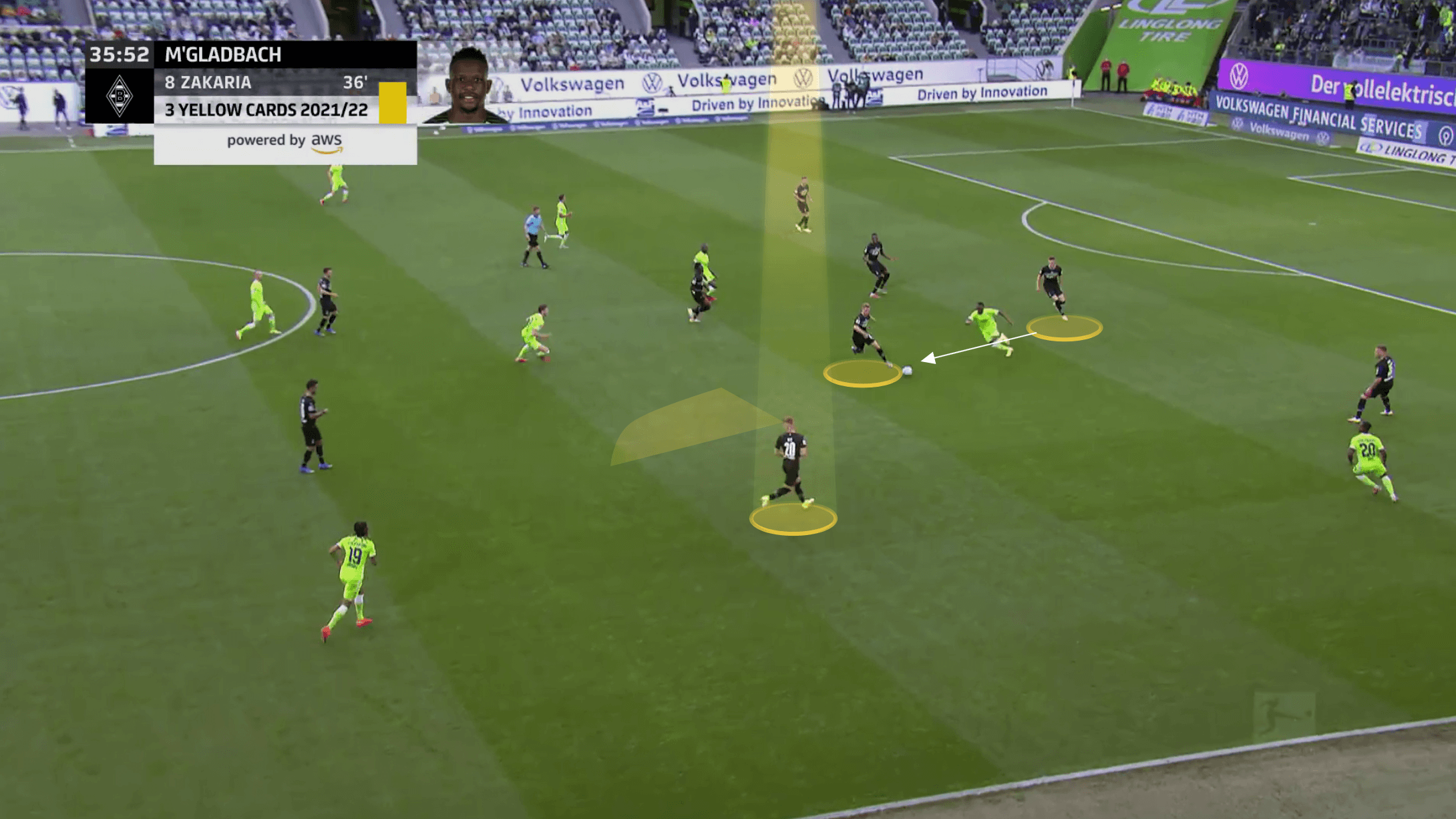 He has good awareness of teammates positioned further forward and releases the ball quickly once in possession. Netz has averaged 4.26 progressive passes per 90 this season, completing 72.3% of these. 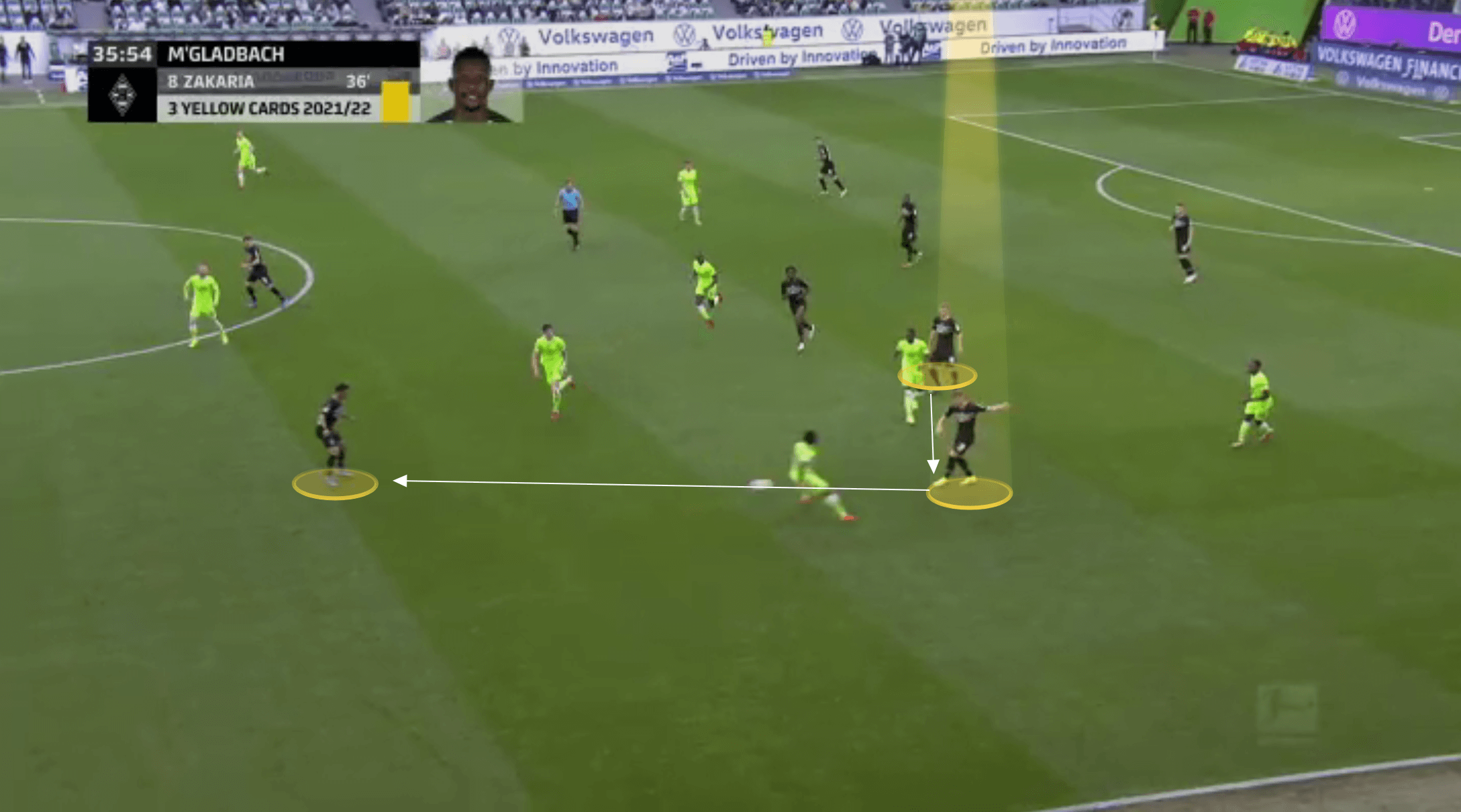 He breaks lines with some regularity, and is positive with his movement after playing the pass. We can see such an example of this below. After intercepting the pass we can see his speed of play once more, moving the ball on immediately and pushing forward off the ball to support his pass. 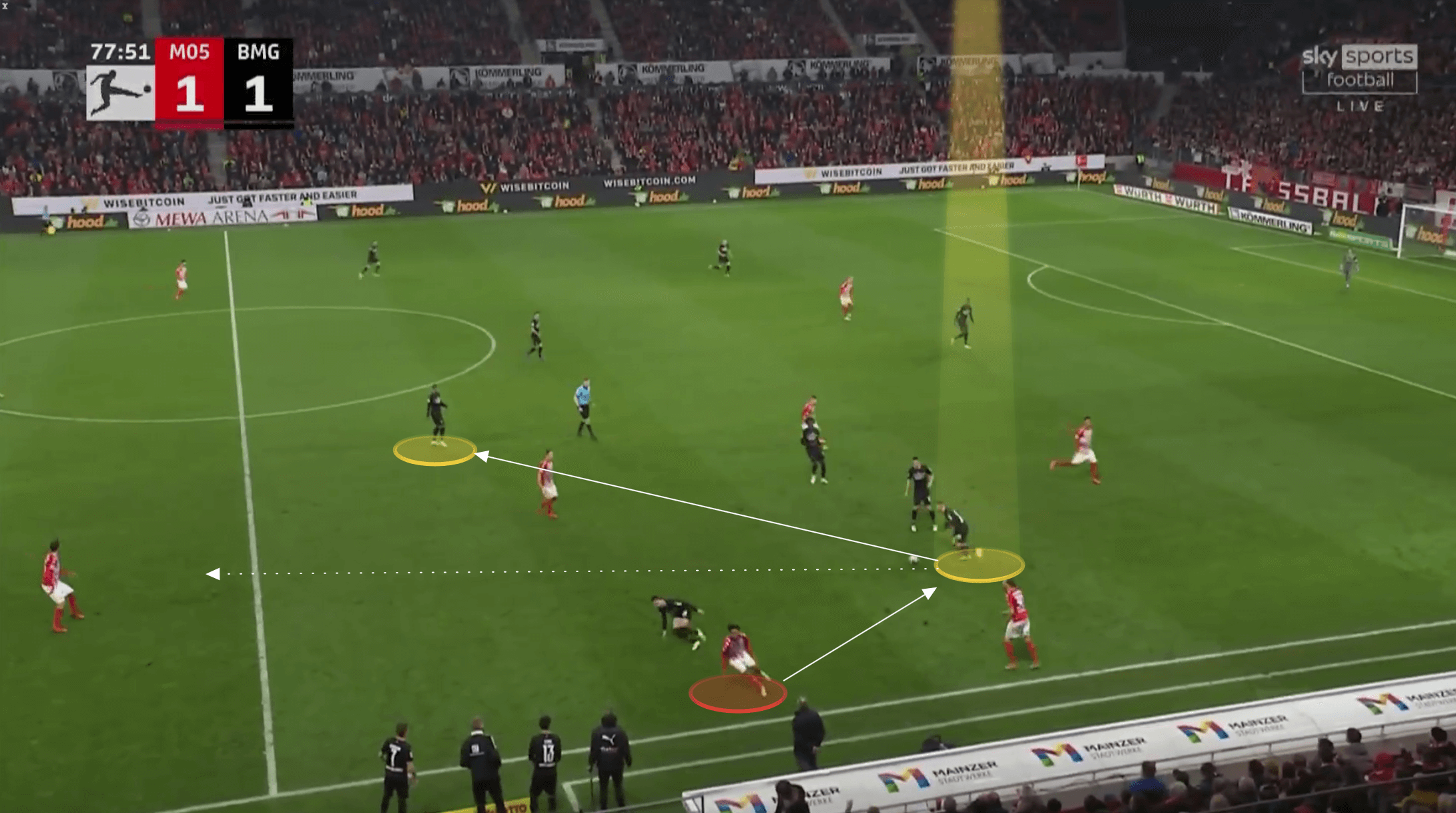 For a player who makes a low number of crosses, it is striking how good some of his deliveries are. Netz can whip the ball in at pace, with excellent accuracy. He shows excellent vision to pick out spaces that teammates can move into with momentum to attack his crosses from. We can see such an instance in the image below, where following a short corner, Netz curves the ball into the highlighted space for a teammate to attack. 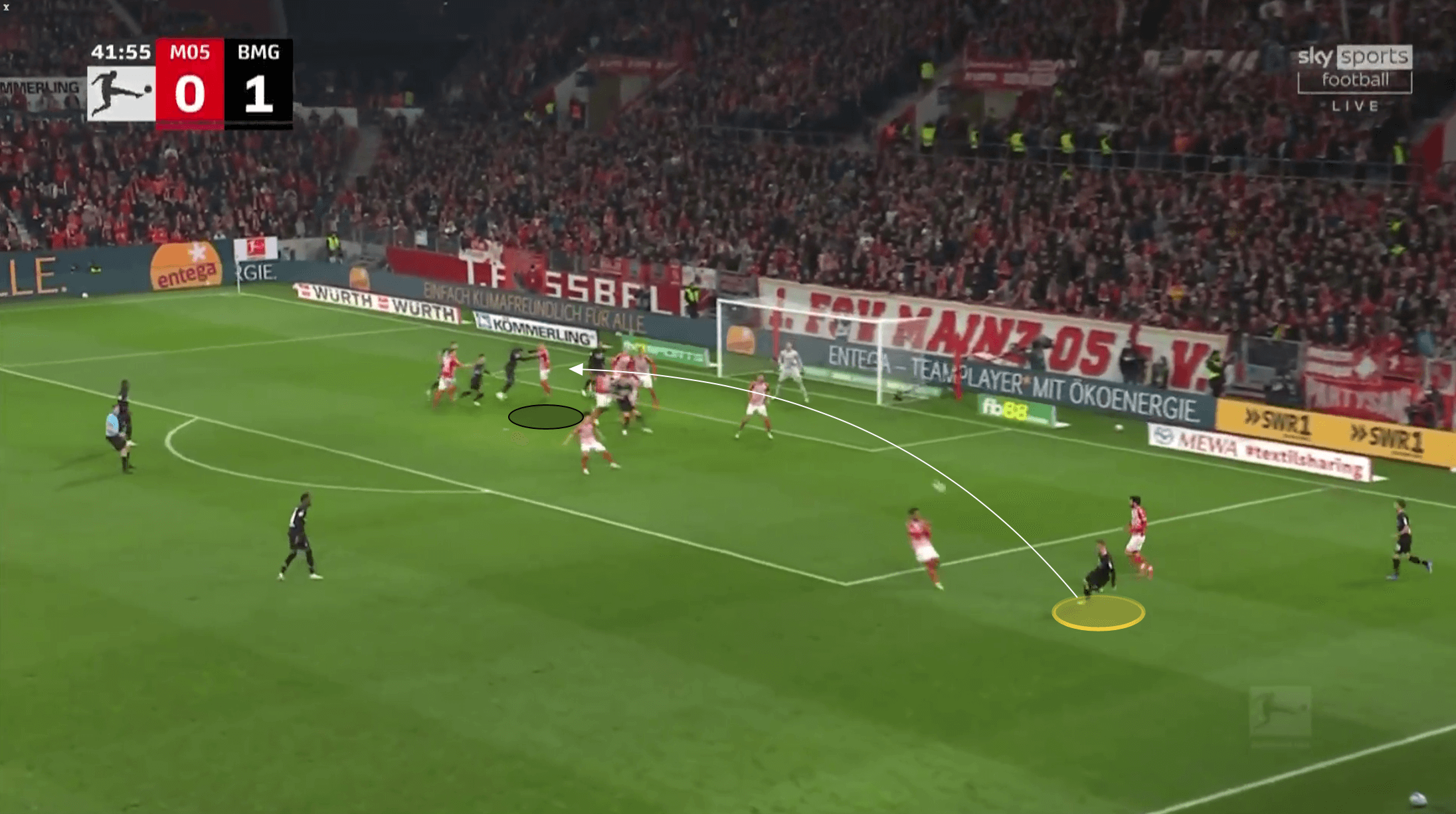 Another example of an almost identical situation can be seen here, again, albeit this cross doesn’t lead to a goal but he does create another high-quality shooting opportunity. 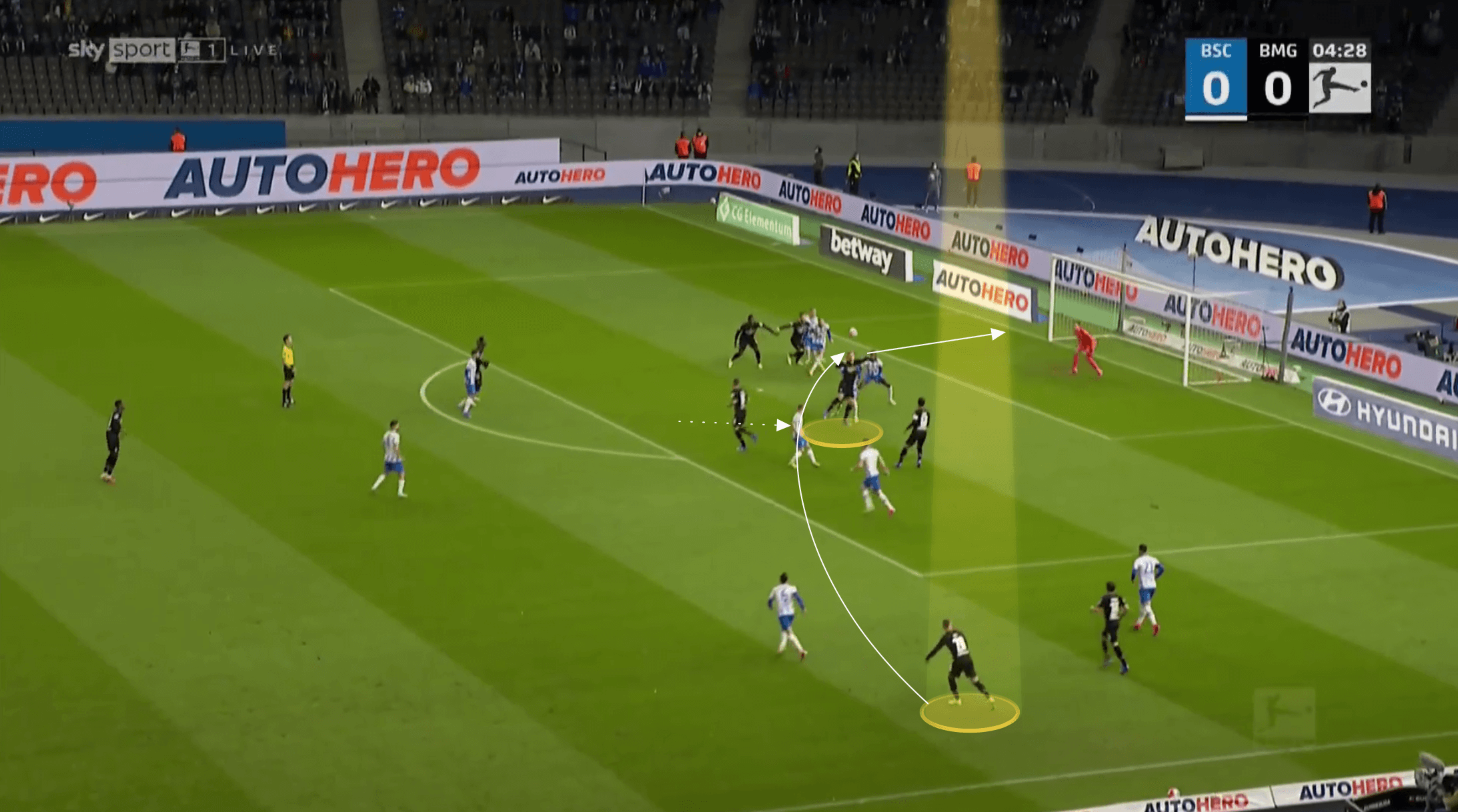 Netz is an impressive defender and has performed respectably well when we look at his statistics from this season so far. In his 5.61 defensive duels per 90, Netz has averaged a strong 68.7% win rate. Whilst he doesn’t get involved in many aerial duels (less than one per 90), he holds his own, winning 60% of these thus far this season.

Netz is expected to push high in the defensive phase and when operating as a wing-back he will be tasked with pushing up to press the opposition full-back. He doesn’t start in an overly high position but shows good anticipation of the pass to jump early and close the space quickly. However, he decelerates amply and avoids being beaten by a dribble. 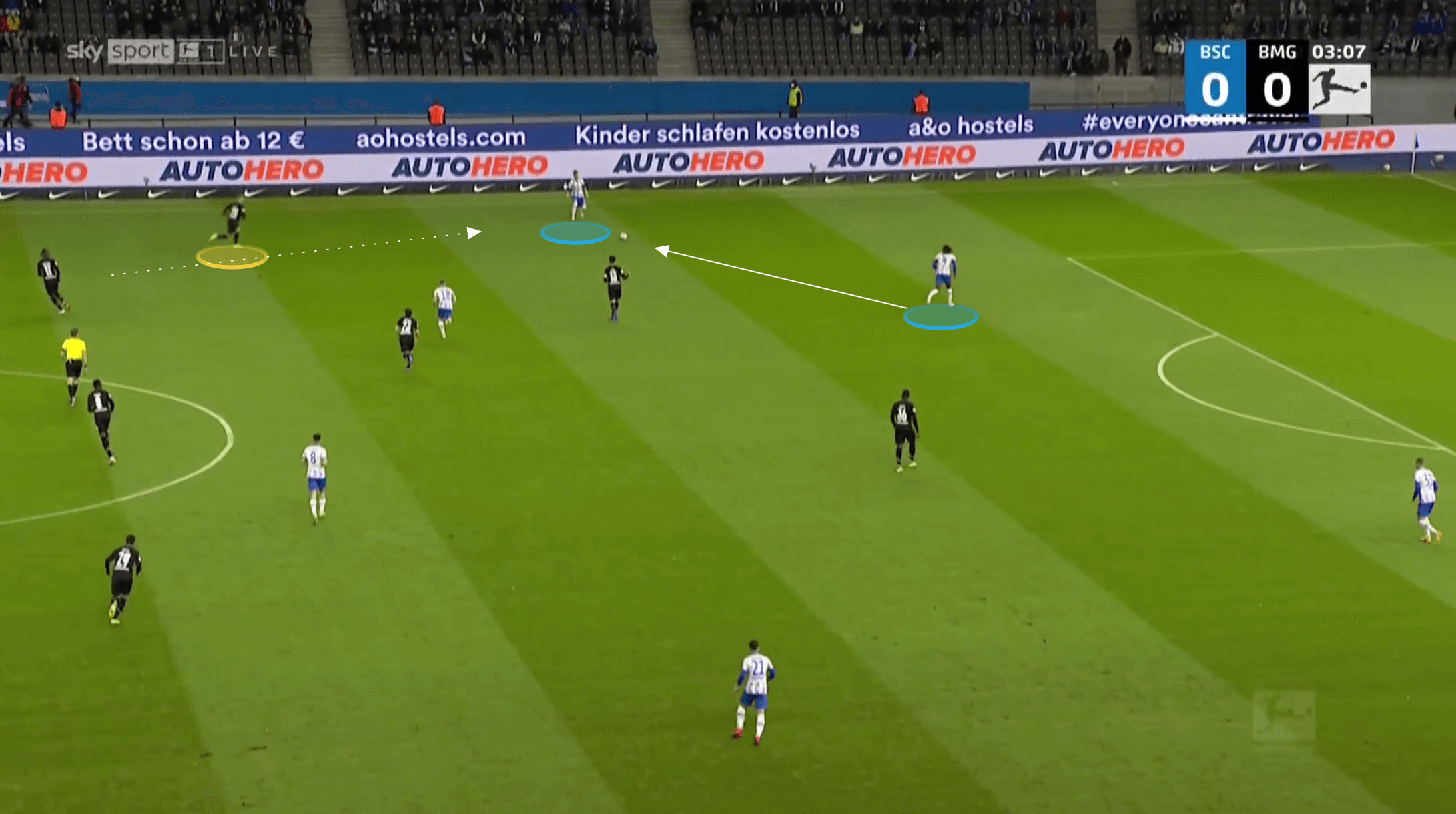 He is aggressive in stepping in to make the challenge. When an opponent receives facing their own goal he will step forward quickly to prevent them from turning. He looks to win the ball early and possesses surprisingly good physicality for a player of his age to push them off. 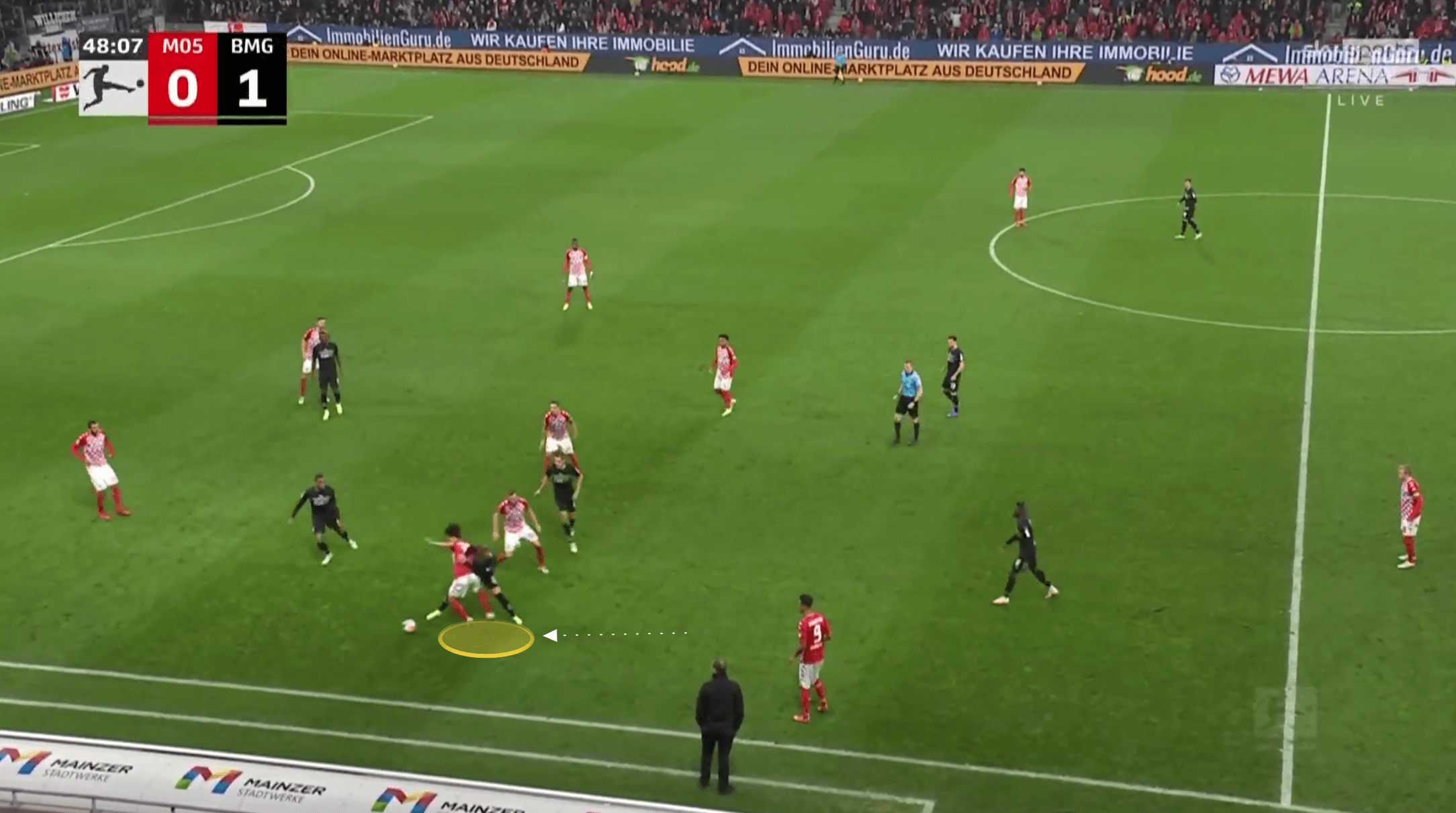 Netz takes a good body position when defending in a 1v1 duel although could potentially dictate where the opponent can dribble more so by shifting further to one side. We can see this in the image below. Whilst in this example, against Bayern Munich, the attacker dribbles to Netz’s left, where the defender wants him to go, he doesn’t shut off the right side as an option, taking a position in line with the ball-carrier rather than to one side. 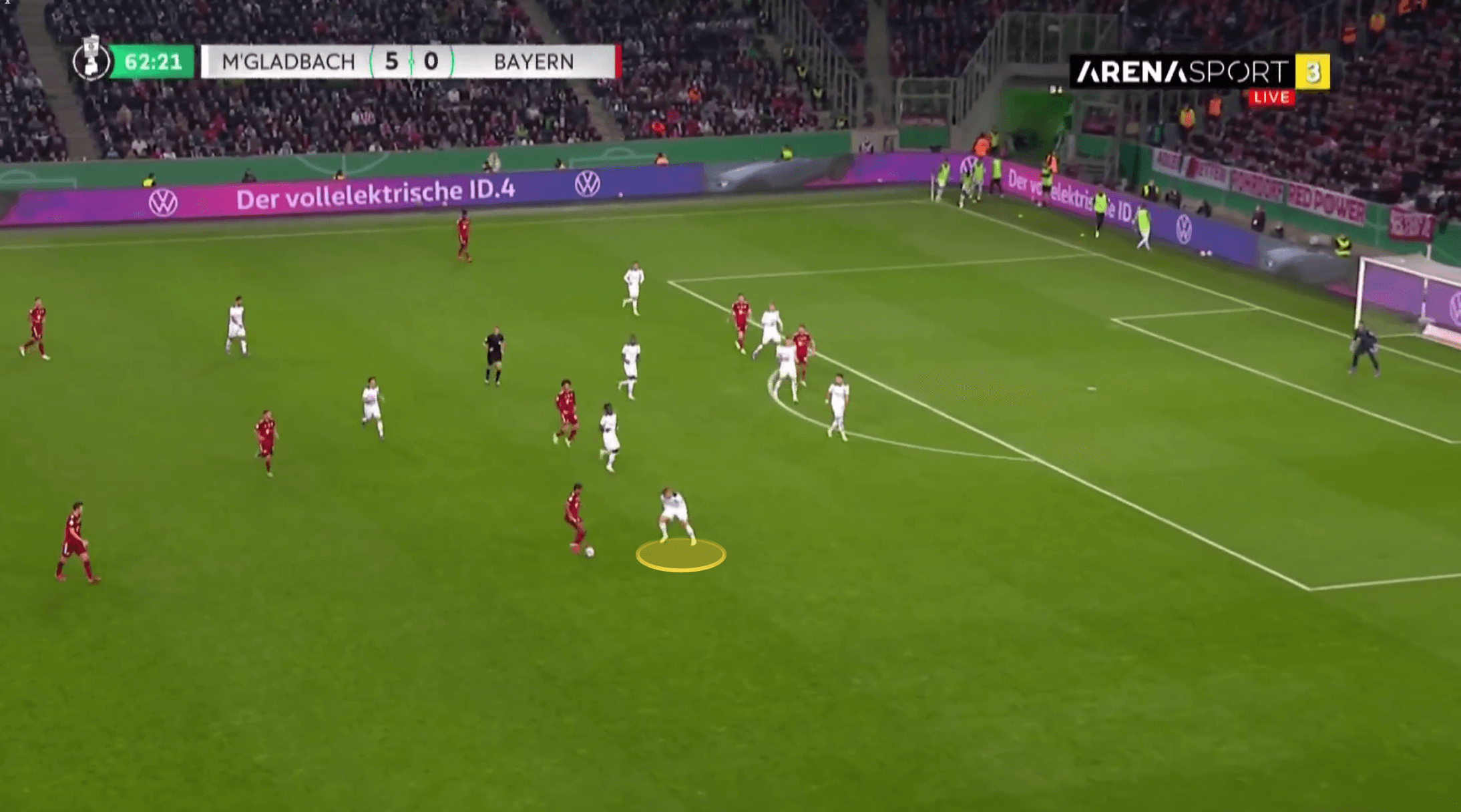 Whilst the attacker can beat him initially, Netz has outstanding mobility and agility to turn quickly and recover the space effectively. He times recovery challenges particularly well like in the image below. 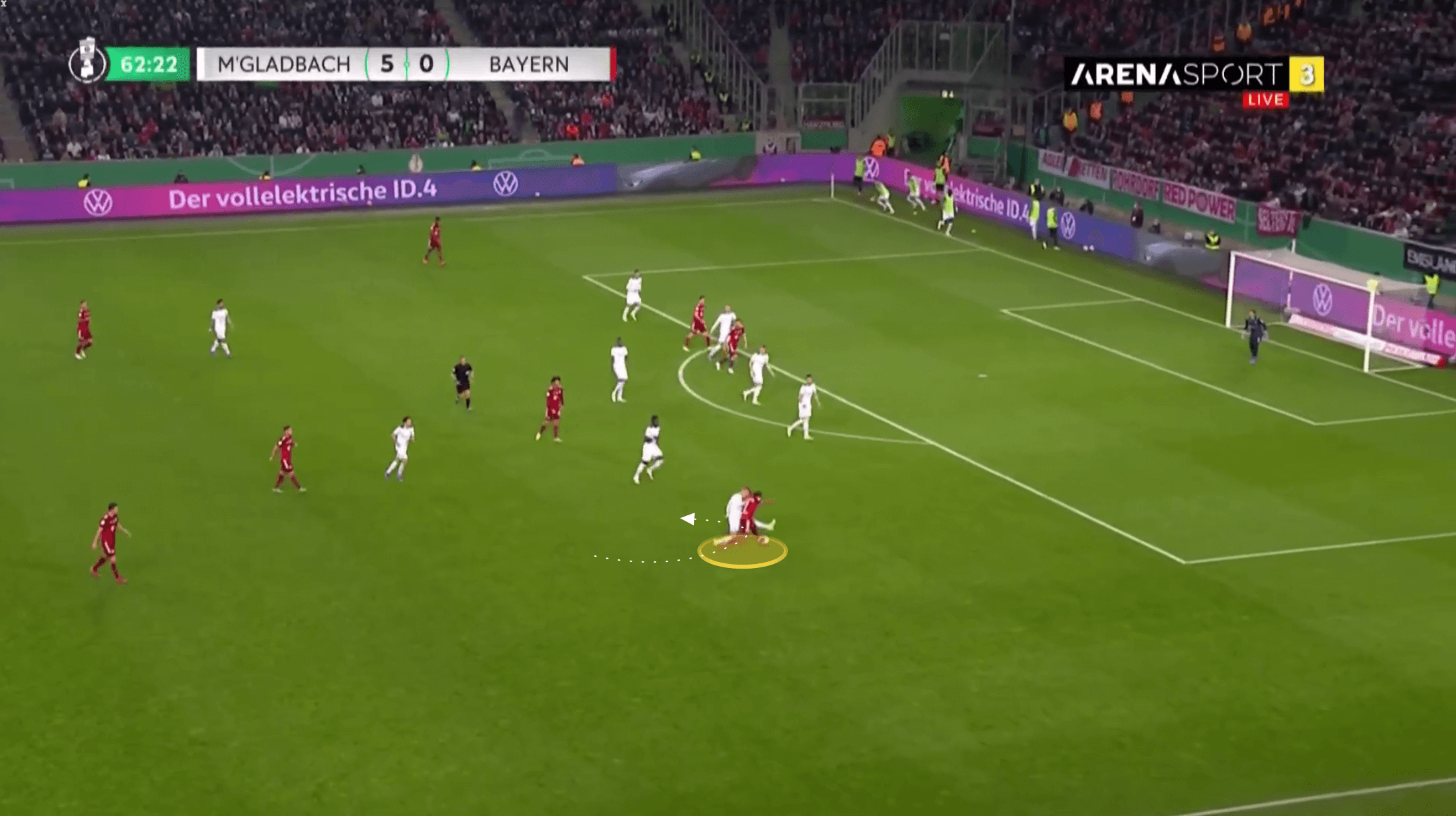 He shows excellent anticipation of opportunities to cut out the ball and make an interception, and covers ground very quickly when doing so. Netz shows almost a recklessness at times in rushing into a 50/50 challenge, and whilst he may get pulled out of position he often comes away with the ball. His average of 7.29 Padj. interceptions is an impressive tally thus far this season. We can see an example of him recognising Mainz hitting the switch of play and he quickly steps forward to cut out the ball before the winger can get to it first. 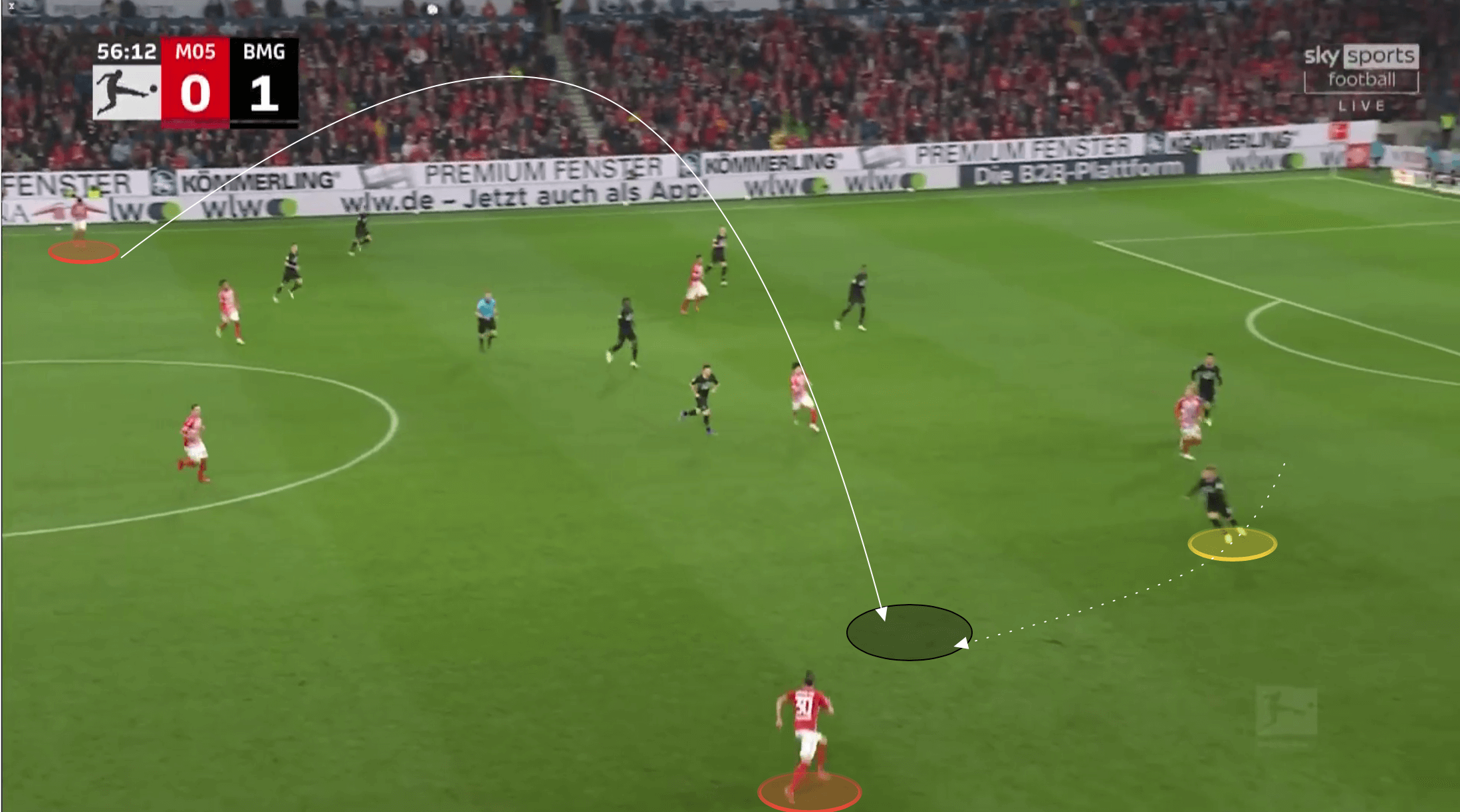 At just 18 years of age, and not turning 19 until the end of the season, Netz has still got plenty of time left to develop before he needs to be pushed up to the national side, or some of Europe’s biggest sides like Man City come knocking again. Nevertheless, he is in a good spot at Monchengladbach where he is playing regularly and thriving under Hutter. Whilst he is a quality ball player, strong in defensive duels and consistently provides an attacking presence down the left-wing, Netz does need to develop more of a consistent aerial presence, and should potentially take a higher number of crosses than he does, such is the quality of his delivery.