Bundesliga 2021/22: Should Adi Hütter continue with a back three at Borussia Mönchengladbach? – scout report

Maybe because of the early announcement of managerial change, Borussia Monchengladbach did not end the Marco Rose era too well. This season, Austrian head coach Adi Hütter came from Eintracht Frankfurt to be the head coach, but they were not having a good start in the Bundesliga.

Gladbach began with a strong 1-1 draw against Bayern Munich, but being criticized heavily after consecutive losses to Bayer Leverkusen and Union Berlin. Although Hütter was famous for a back three at Frankfurt, instead, he stuck with a 4-2-3-1 in his early days. Only at the fourth game, he tried a back three against Arminia Bielefeld and won 3-1.

Intriguingly, his team surprisingly lost to Augsburg in a back four shape, and this encouraged Hütter to revert to a back three against Borussia Dortmund. His team beat Rose’s Black and Yellow and took an important three points. This tactical analysis is a scout report of some interesting attacking scenarios of Gladbach, and see whether it would be a long term solution for the team.

Structural advantages of Gladbach’s back three 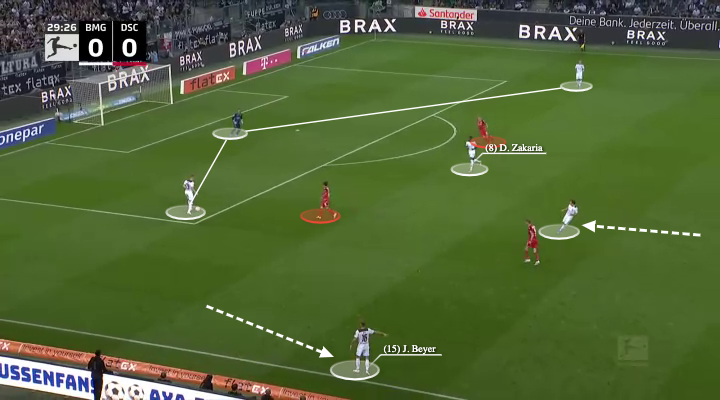 In the build-up, the back three was actually created by two centre-backs and the goalkeeper as we have shown in the above image. They pushed the right centre-back to the touchline, making Jordan Beyer more liked a right-back. Also, they only need one defensive midfielder and Denis Zakaria would take that role.

With this shape, the advantage was clear, it was the 3v2 overload against the two-strikers of Bielefeld, so Gladbach could choose the side they want to progress with the free centre-back in half-spaces. 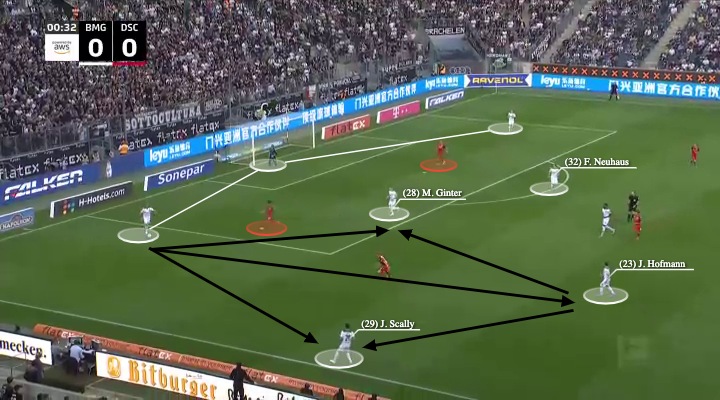 But pushing Beyer to the right-back was not the only solution, Gladbach also showed another way to progress in the build-up. In the above image, Matthias Ginter operated as a defensive midfielder behind the first line, while there were more players dropping to help.

It was the same concept to use Yann Sommer and the other two centre-backs to create a back three, and it overloaded the two-strikers of Bielefeld. However, they also had the right wing-back (Joe Scally) and Jonas Hofmann deep to help. There was a wide diamond on the flank which gave Beyer three options. Also, if Gladbach managed to get the touches right, they could also use vertical third-man plays to reach players between the lines, such as Ginter. Or, releasing Scally on the right flank. 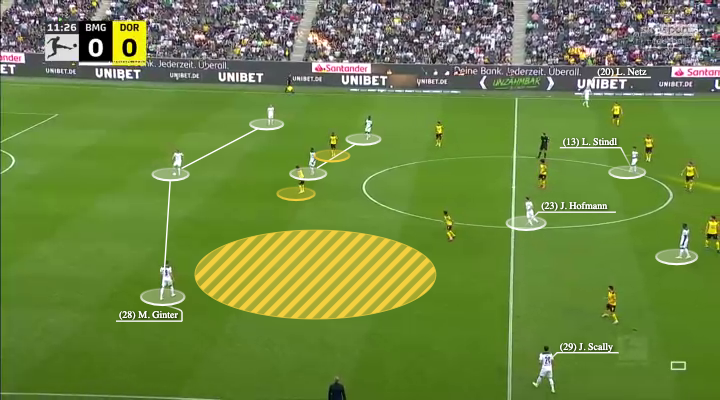 In higher areas, Gladbach also capitalized on the back three to create advantages over the two-striker system. Against Dortmund, they used a 3-2 shape to imbalance the opposition first line. So, when Zakaria and Manu Koné stayed in the central corridor and the left half-spaces, the right half-spaces were vacated. Very simply, Gladbach could progress through that channel when Ginter’s first touch brought the ball into the yellow zone.

Another advantage of Gladbach’s back three was to keep the attacking players closer to each other so they could combine. Gladbach could use a pair of wing-backs to hold width, so the likes of Lars Stindl and Hofmann were operating in spaces centrally. In the above scenario, if Dortmund left midfielder stepped up to block Ginter, he would leave the number 6 alone. 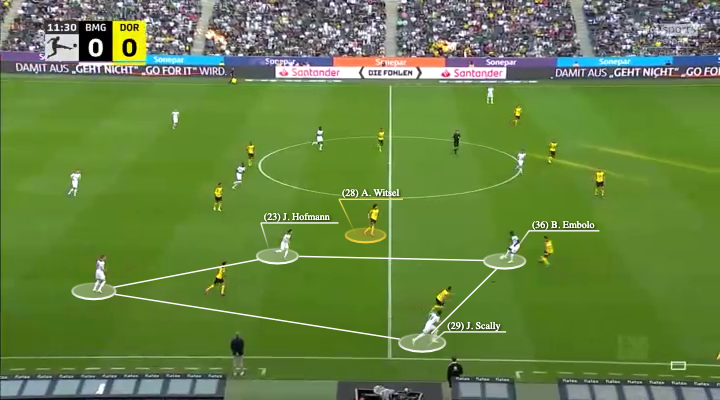 As Dortmund’s left midfielder pressed Ginter, the number 6 must move higher to cover his space when Hofmann dropped. In this case, Ginter played a vertical pass to Breel Embolo, and you could see the diamond structure of Gladbach again. This allowed the player on the ball to counter-act based on the opposition. If Axel Witsel was closer to Embolo, the Swiss international could use Hofmann as the third-man; if Scally outran the wing-back on the flank, Embolo could release the young American as well.

In this scenario, Witsel was out, so Embolo could access the spaces in the centre laterally as Dortmund did not have a defensive midfielder at this moment. 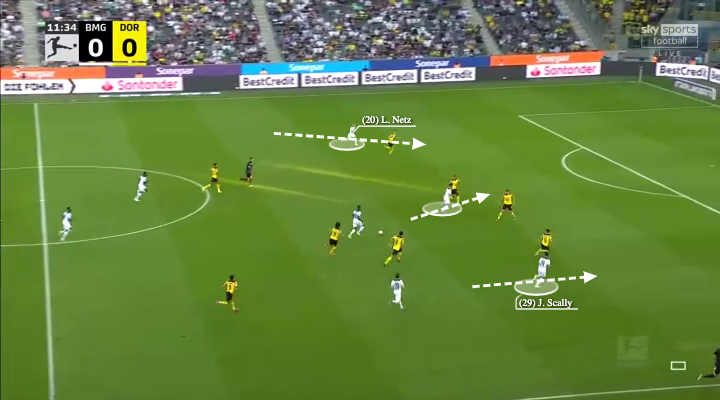 Now, Gladbach were reaching the final third with players running forward to support. As expected, the wing-backs were always high to join the attack in this phase, as Scally and Luca Netz were running from wider positions. However, the difference between Hütter’s Frankfurt and Gladbach was the style of attacking players. In his previous club, he had André Silva, a player who was good at making runs behind and finishing, but Hütter was lacking the same profile at Gladbach. 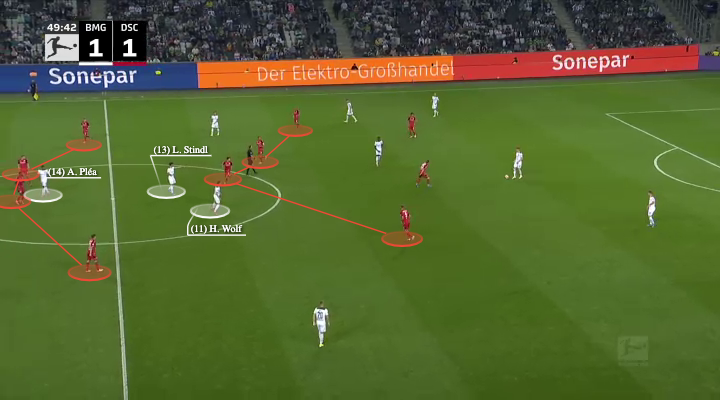 As we’ve suggested, deploying a back three allowed Gladbach front players to stay together as wing-backs could occupy the width. Instead of being a purely tactical decision, it might also be a strategy to transmit ideas to players. When Hütter played a 4-2-3-1, their full-backs always struggled to connect wingers as they were not showing the angles to pass/receive. Also, the front players were not linking each other well as sometimes they were apart, so Gladbach needed a better “language” to facilitate interactions between players.

Of course, from a tactical perspective, the 3-4-2-1/3-4-1-2 shape of Gladbach would allow them to exploit spaces behind the midfield. For example,  Gladbach had Alassane Pléa high to push the defence deeper, so Hannes Wolf and Stindl had more spaces behind the opposition midfield. This would help the technically better Gladbach attackers staying together, and using pass & move to escape from the press.

But there were issues…

Although we stated some structural advantages of Gladbach’s back three and how they played with this formation, it was imperfect. Now was still Hütter’s early days, and his team faced some problems in the construction of the attack. Sometimes the attacking formation was too flat, and the players were trapped sideways, resulting in ball turnovers and transitions. 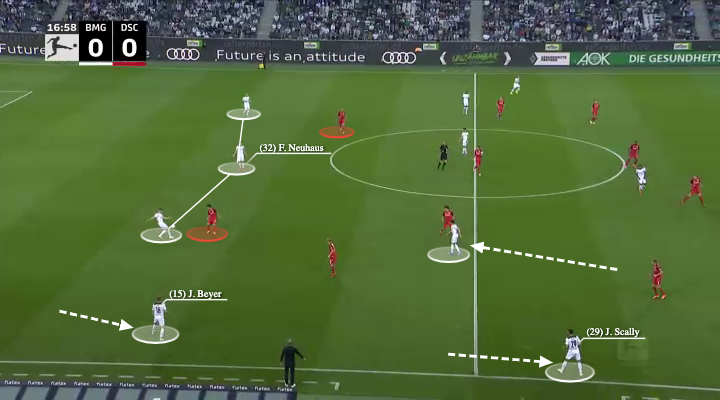 We analyzed the back three of Gladbach in the last section, it was very flexible as the players will rotate and let others filling their positions. Sometimes the boundaries between a three and a four at the back was not drawn clearly. For example, Gladbach had Neuhaus dropping between centre-backs in the above image, and pushing Beyer to right-back position, and having Scally as a right-winger. The 3v2 in the centre still existed with Neuhaus’ presence. 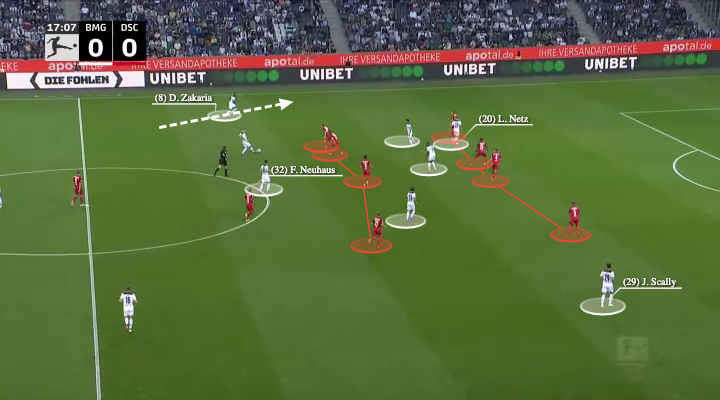 As Gladbach dominated the first line with a “+1” advantage, they could move the ball from side to side very easily. Now, they reached the left side when Nico Elvedi brought the ball out. You could see the players were actually not at their positions on paper: Zakaria dashing on the left side, Netz and Scally (wing-backs) being the highest players.

The key was always the same, can Gladbach move the ball back to the centre when they were out wide? Crossing might not be a preferable way of their attack, as the team enjoyed creating overloads with strong side and weak side concepts. However, it would be difficult to connect when the shape was not staggered, we will investigate that in the next example. 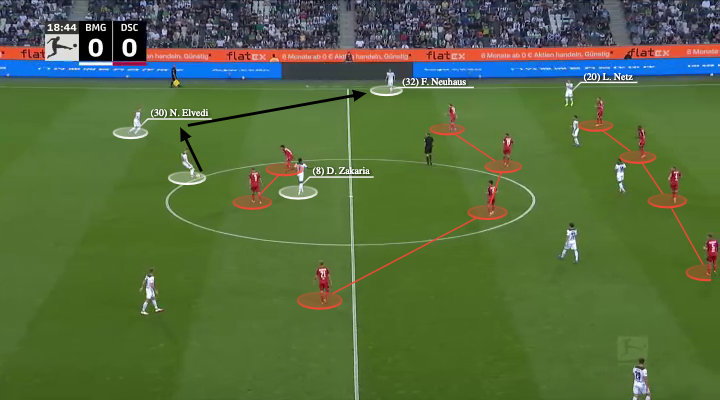 Here, Gladbach came with a 3-1 shape again, Zakaria was the midfielder. Given they had a structural advantage in the first line, they usually move the ball to wide centre-backs (Elvedi above) to play the forward passes. But they were prone to play diagonal passes to flanks instead of breaking the lines vertically, as the likes of Stindl was mostly behind two lines, it was difficult to find them.

In this case, Netz went high to push the right-back down, so he vacated the flank for Neuhaus. 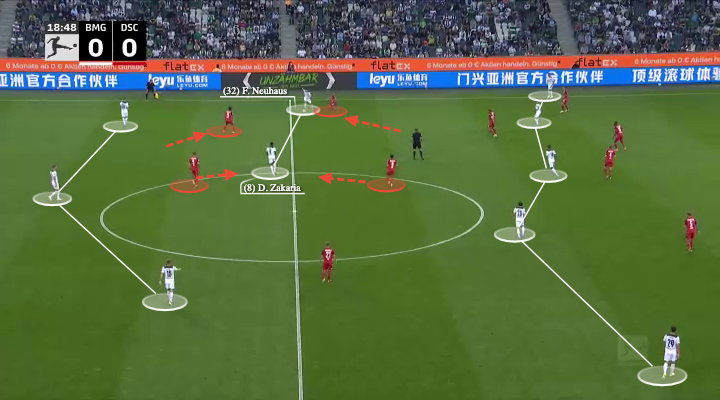 But this was the problem, Neuhaus was trapped in the wide zone. Although he was a right-footed player, he could not connect the front five diagonally as the Bielefeld winger narrowed that angle. The opposition strikers also closed the return passing lane, and baiting Zakaria in the centre. Being out of passing options in these situations were too common in Gladbach’s game, they need more solutions to break the flanks effectively.

As we concluded in this analysis, a back three was not the antidote to solve everything. Sometimes they still conceded transitions unnecessarily, but a back three should be preferable in short term. The key would be Hütter’s choice in the midfield, if he preferred Zakaria and Koné, they had better protection for centre-backs. But if they wanted to be more aggressive in the attack, Neuhaus would add the dynamics into the construction. The formation also depends on the opposition as well, against two-striker formations, they were likely to adapt with a back three.

Hütter is an experienced coach, with this group at Gladbach, he might want to maintain flexibility between formation and tactics. That means he would be less rigid than his time at Frankfurt and keep changing the formations to refresh players. The season has a long way to go and let’s see what would happen next.