After an eighth-place finish in the 2020/21 season and finding themselves bottom of the league after three matches at the start of the current season, many Arsenal fans were ready to see Mikel Arteta go. However, things can change very quickly, and few people will have predicted how the youngest squad in the Premier League now finds itself in the top five. So, what exactly has Arteta changed? Stick around because, in this tactical analysis, we’re going to be taking a look at a scout report of how Arsenal have become one of the most exciting teams in the league.

Changes made by Arteta

When looking back at Arsenal’s summer transfer window, we were all left questioning Arteta’s decision making process, spending over 150m on players all under the age of 23, while simultaneously losing their star striker Aubameyang. However, how wrong we’re all turning out to be, as the new signings in Ben White, Aaron Ramsdale and Tomiyasu seem to have been extremely well-thought-out picks, with each player quickly adapting to Arteta’s style of play. So, what exactly has he changed? Let’s first take a look at the changing starting XI and formation.

Arsenal found their form after switching from an underwhelming 3-4-2-1 into a more dynamic and versatile 4-2-3-1 formation, which has remained their system of choice since. The defence was arguably the area of the pitch that needed the biggest upgrade, and as we will see in this analysis, their summer signings were able to do just that. 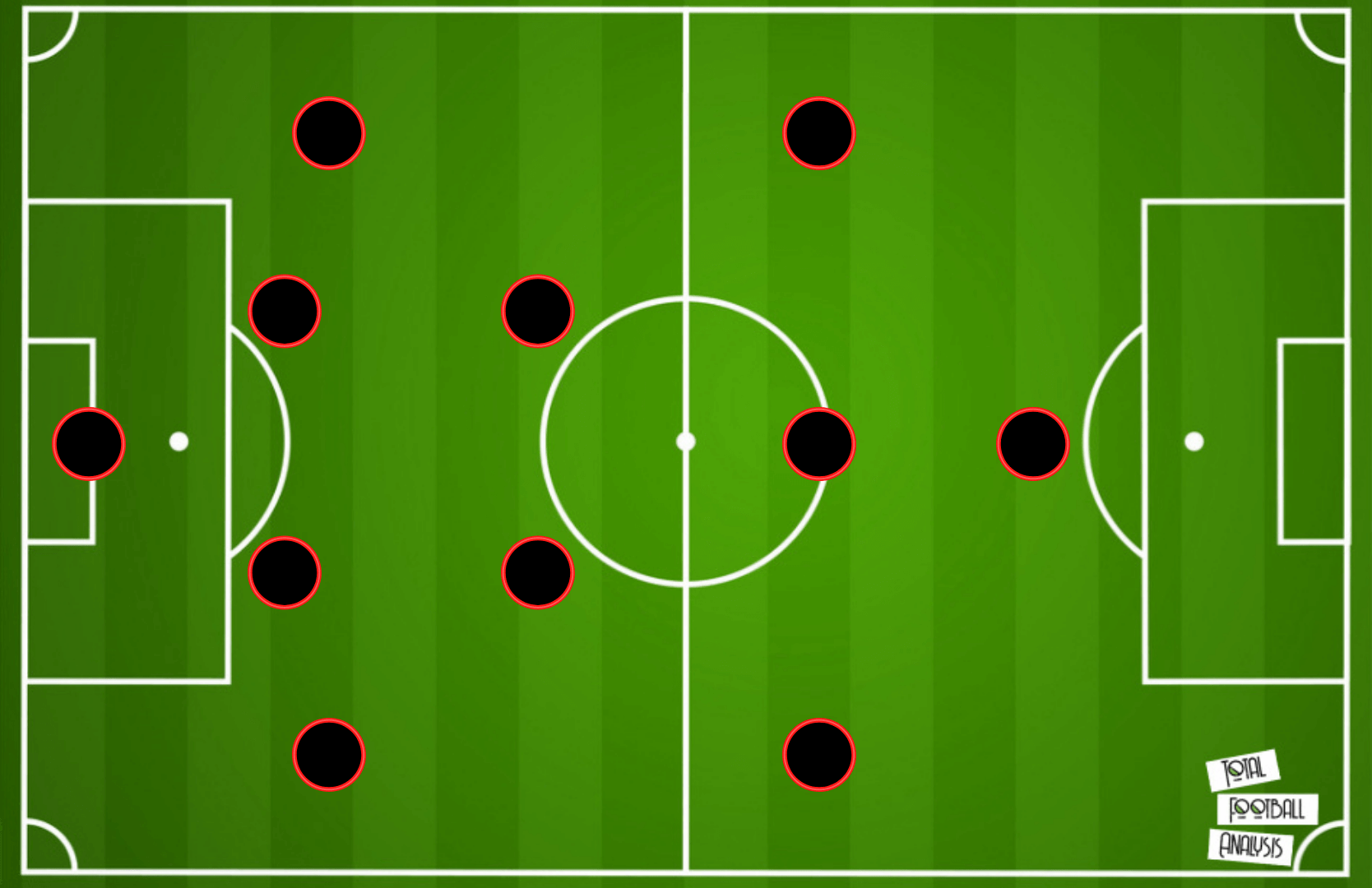 Ramsdale has come in for Leno, and boasts a 76.3% save percentage, the second-best in the league. Their most expensive summer signing in Ben White has been their most consistent starter, and the defensive partnership with Magalhaes has added a lot more solidity at the back compared to either Rob Holding or David Luiz.

Kieran Tierney has proven to be one of Arsenal’s most reliable players, while Arsenal have picked an absolute gem at right-back with Japanese international Takehiro Tomiyasu. While not as flashy as other right-backs in the league, he is arguably much more consistent compared to Hector Bellerin. Due to injuries, both Soares and Tavares have also helped the team maintain a level of consistency.

The two holding mids have remained consistent under Arteta, with Partey and Xhaka providing a great balance of defensive support in Partey, and offensive creativity in Xhaka.

Finally, the youthful and energetic offensive set of players have given Arsenal some much-needed energy up top. The surprising yet welcomed reintroduction of Martin Odegaard as the attacking mid, has helped the team exploit the two wingers of Saka and Emile Smith Rowe who are proving to be Arsenal’s main attacking weapon. At times, Martinelli has filled in on the left flank, while Lacazette has been the consistent starter up top with the departure of Aubameyang, acting less as a target man and more as a provider.

With this young and vibrant squad, Arsenal are suddenly less afraid to do the hard work and have shown a willingness to work for each other this season.

So, Arsenal seem to have finally found a strong core to the team, giving them a good foundation to work on their tactical game. And it’s here where we can start to see how Arteta is able to get the most out of every player in the team. Let s start with their offensive tactics.

As you’d expect from a disciple of Pep Guardiola, Arteta will almost always look to have the Gunners build from the back line. If under a lot of pressure, then Ramsdale can also resort to a long ball, usually out wide if there is space ahead of the fullbacks, or further up into the wingers, where they can have support from Odegaard and Lacazette to immediately start their attack. 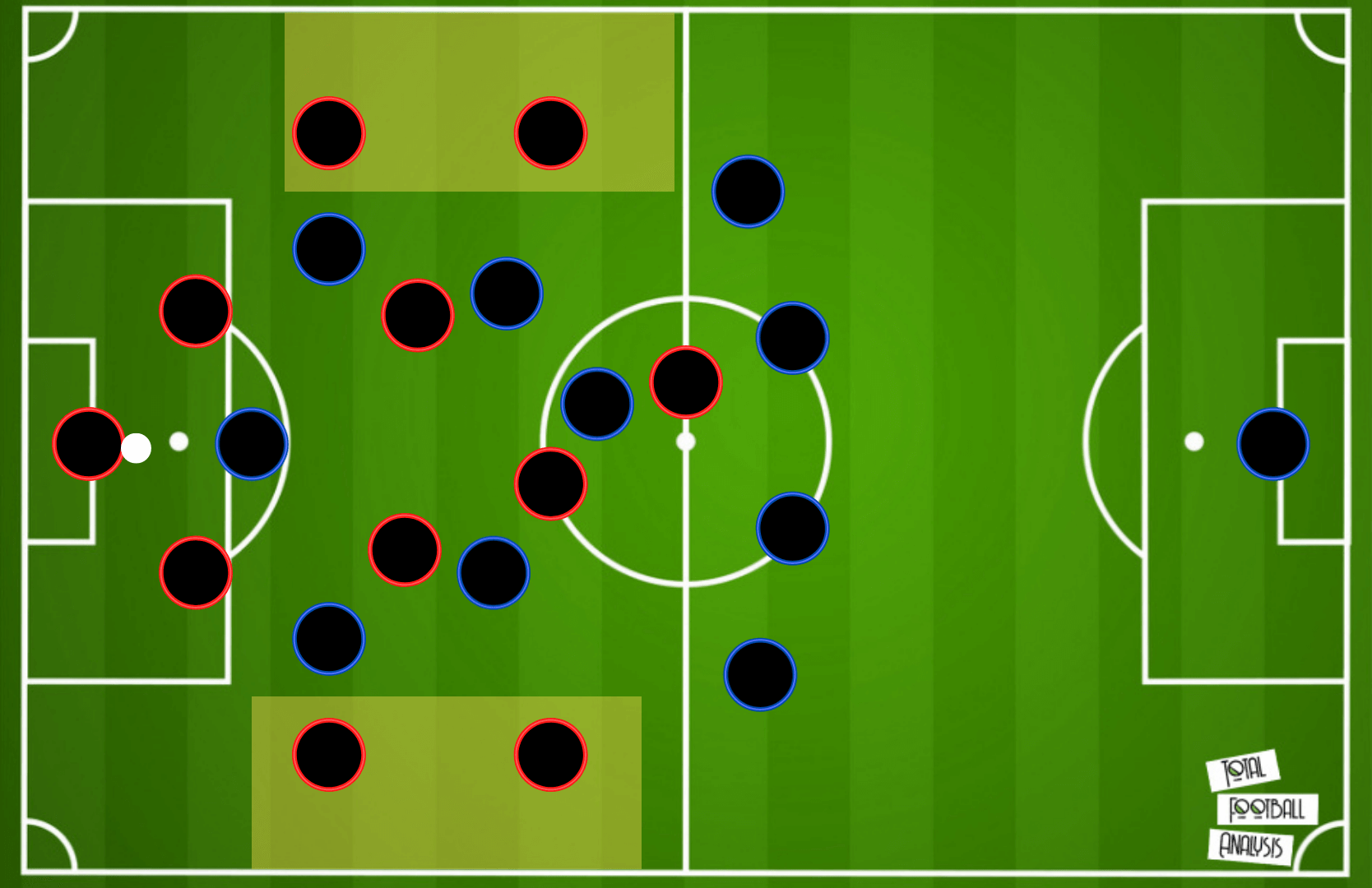 When building up however, the two centre-backs will start on the edge of the six-yard box, with the fullbacks pushing up in line with Xhaka and Partey. Partey is usually a lot more involved than Xhaka in the first stages of build-up with the Swiss international looking to gain a more advanced position between the opposition’s lines. 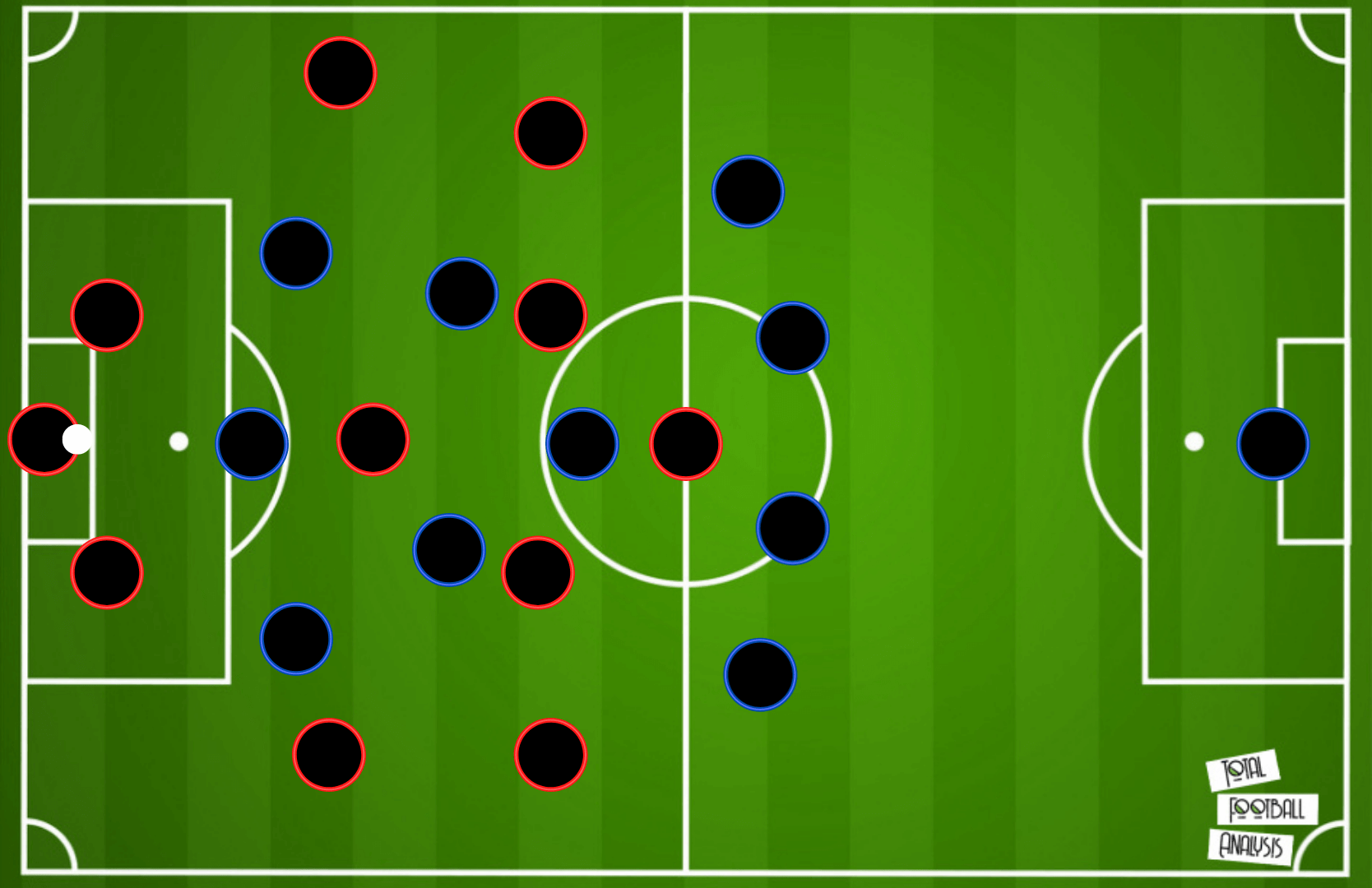 While at the start of the season it was common for Xhaka to even drop into the left of the centre-backs during build-up to allow Tierney to gain even more ground on the left, Arteta has slowly shifted away from this approach, and rather than shifting to a back 3 to bypass the first line of press, Arteta will look to have more central support, with Lacazette or Odegaard being the players to add width if needed. This is a change that certainly suits Xhaka more, who is arguably much more dangerous with penetrating passes, rather than maintaining possession and adding defensive support.

When the centre-backs have possession, the opponents usually look to cover central positions, where Arsenal could quickly get the upper hand with four players in proximity, and so will usually look to exploit the space out wide. 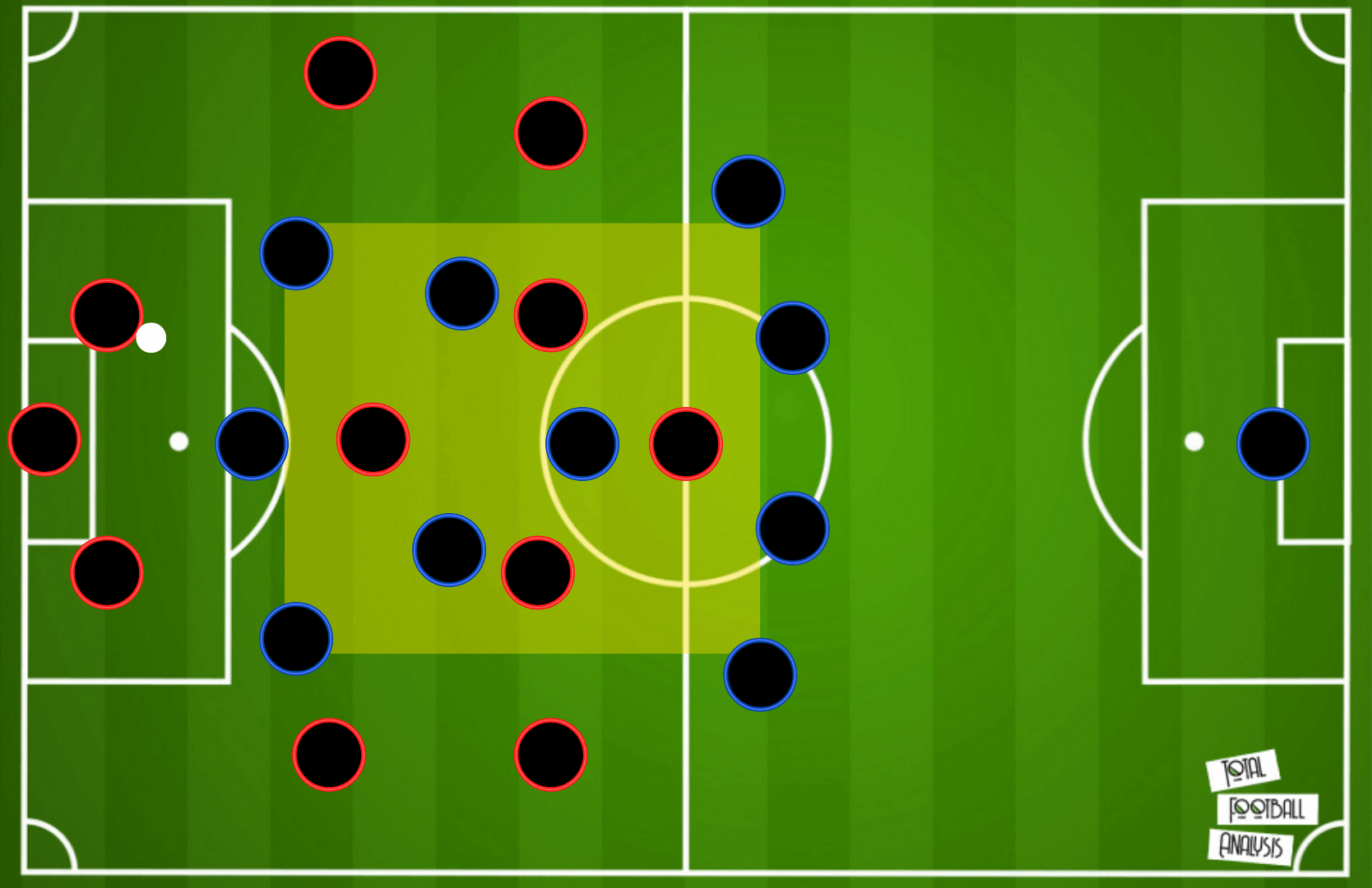 However, if moving the ball directly into the fullback, it’s easier for the opposition to close this position, and so White and Gabriel will look to invite pressure, moving the ball out wide indirectly through Partey. 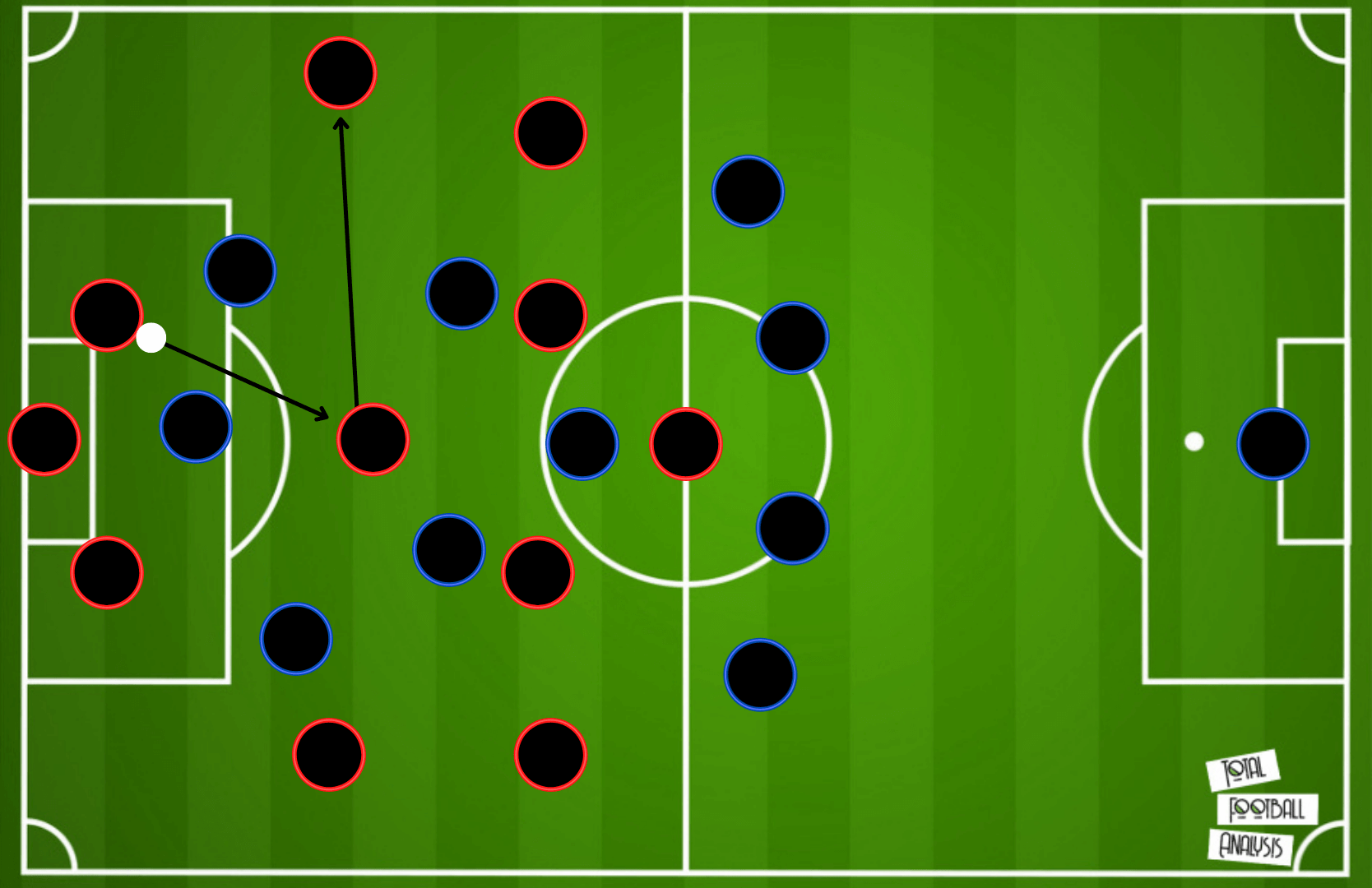 If there is space centrally, then here is where we can start to see the excellent rotations of Arsenal’s attacking set of players. The first thing to note is how Arsenal will often completely vacate space in front of the back line. Lacazette will rotate freely either into the center or mostly out wide on the left in order to create a numerical advantage, while Xhaka and Smith Rowe or Martinelli will hug the touchline to give the team as much width as possible. 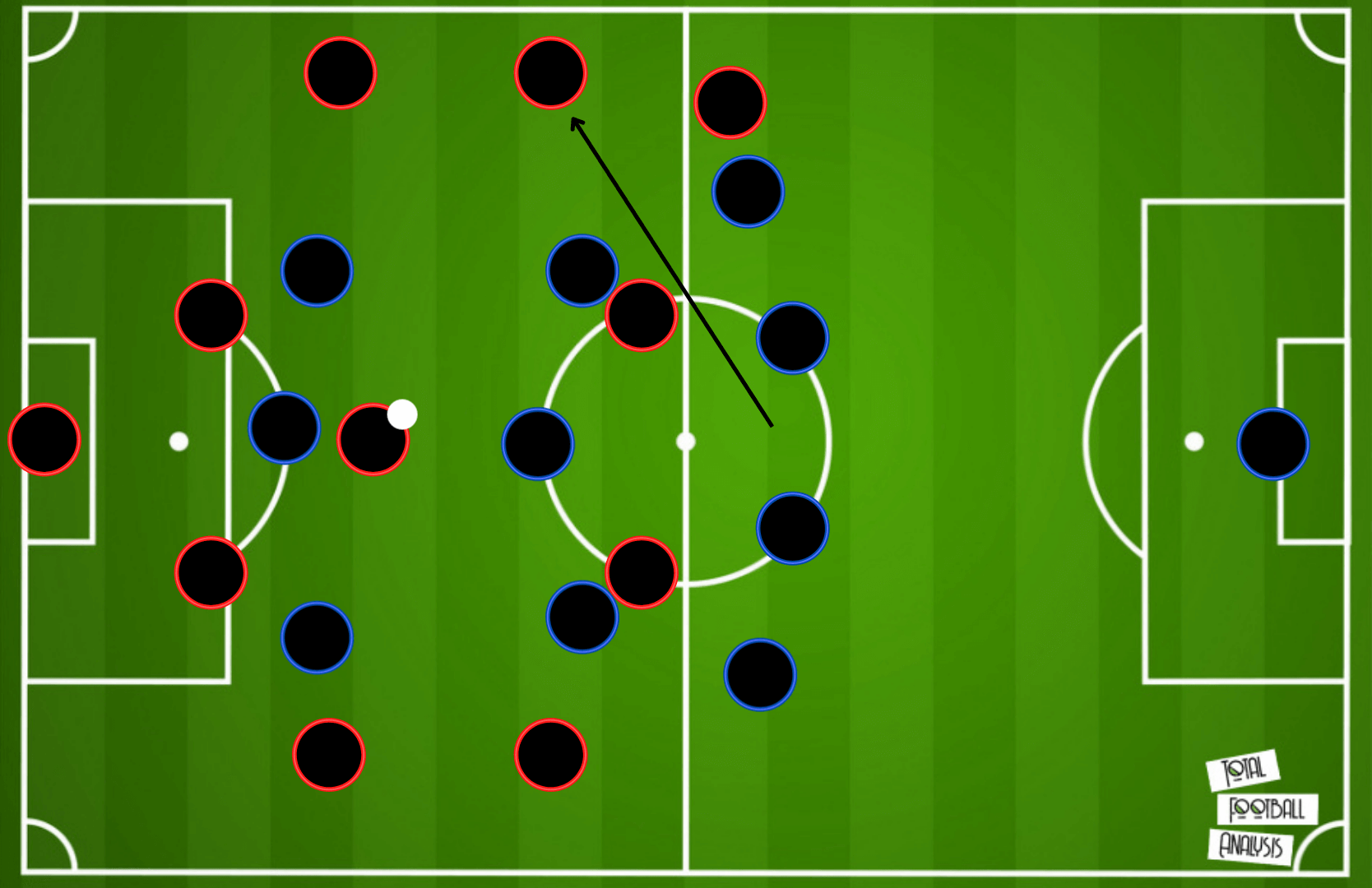 The second player that is crucial in these midfield rotations is Martin Odegaard. When in possession, Arsenal’s midfield three will often rotate to leave only one pivot, with Odegaard and Xhaka in line and further up. While Lacazette moves out on the left more frequently, Odegaard will look to balance this out by moving into the right inside channel. 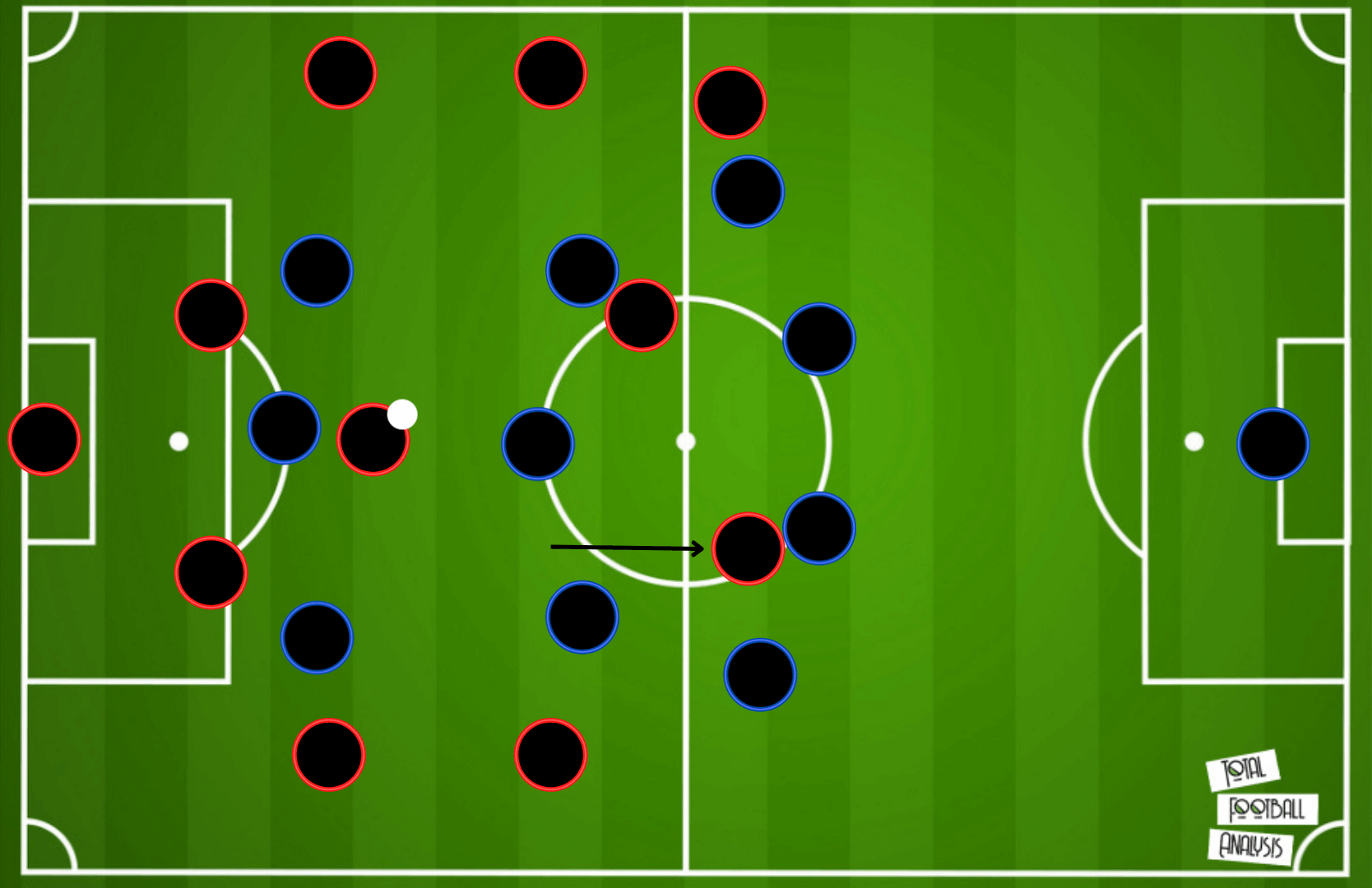 At times, the formation can often resemble more of a 4-3-1-2, with Lacazette as a false 9 and the wingers staying high and wide, or even a 4-2-4, as we can see by their average position in their most recent fixtures. 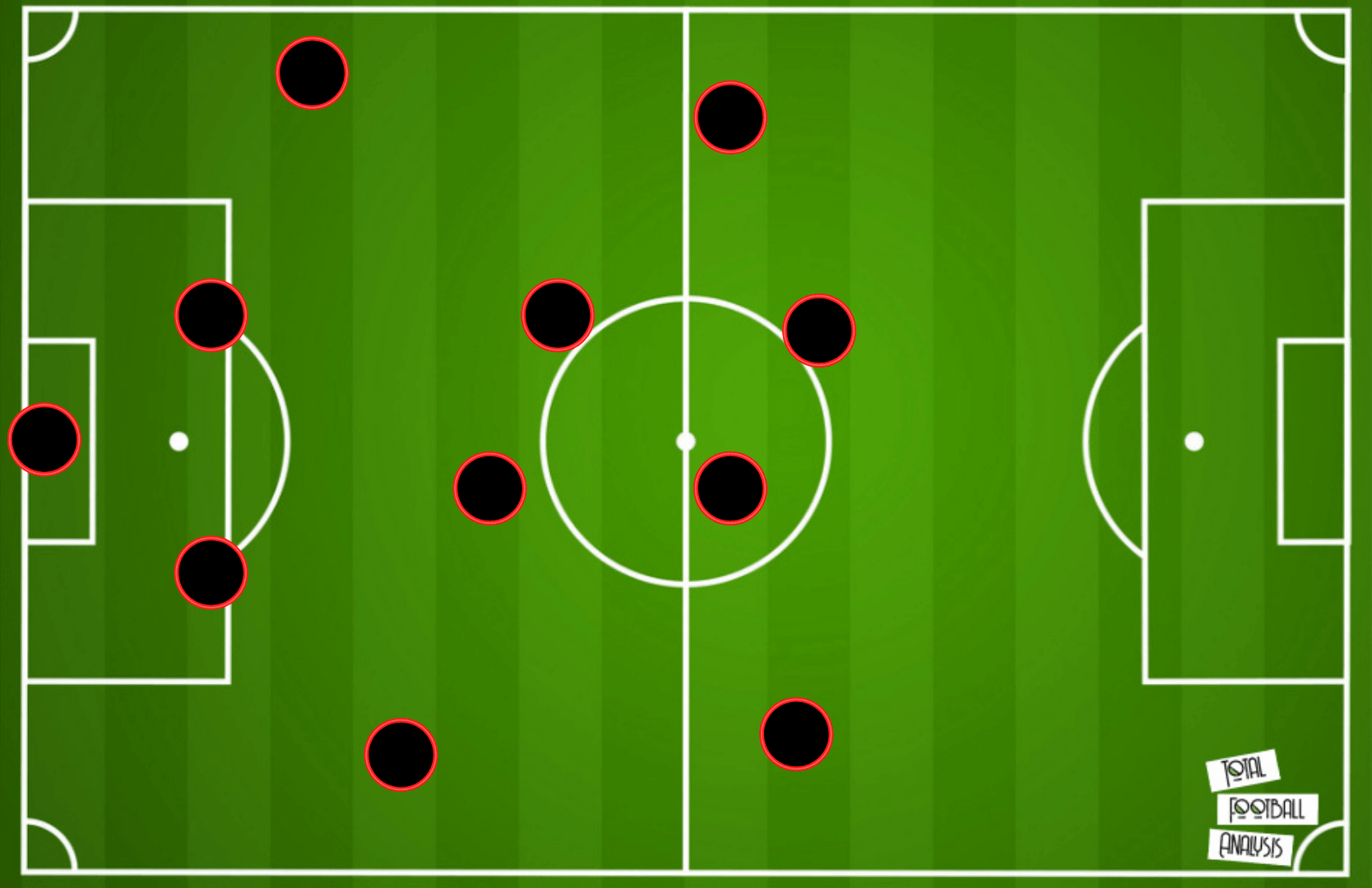 The rotations in the center of the pitch allow the team to quickly outnumber the opposition in key areas and allows them to exploit the individual qualities of their wingers, who can often find themselves in a 1v1 situation with the opposition fullback.

With Arsenal gaining control of the pitch and moving into the final third, the main area of attack is with their wingers. If the opposition has kept a high line, then they will often look to play it into the space behind the fullback for them to run into. 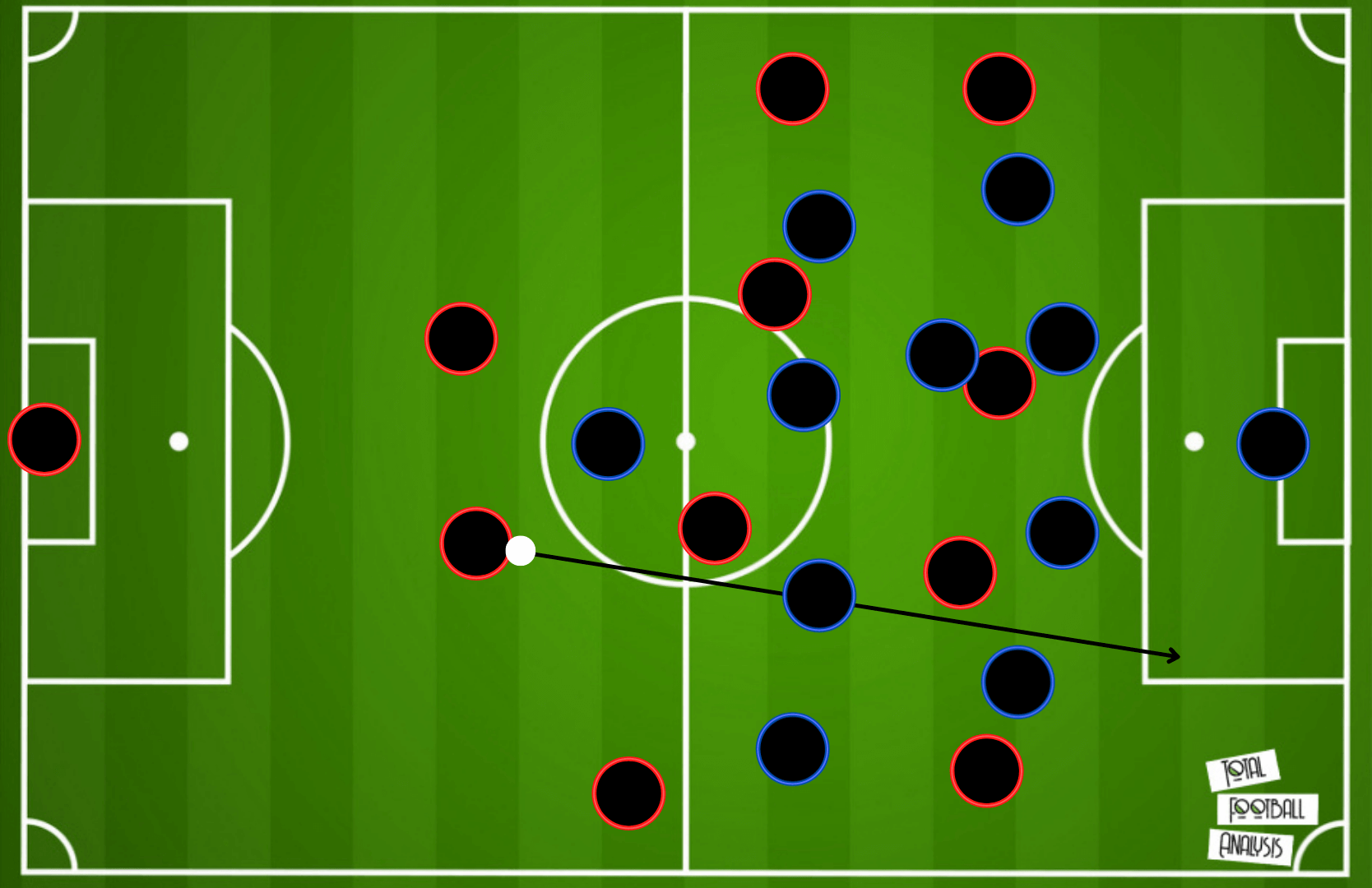 Or, if there is less space, play it into feet where the team can rotate possession and look to create overloads out wide. 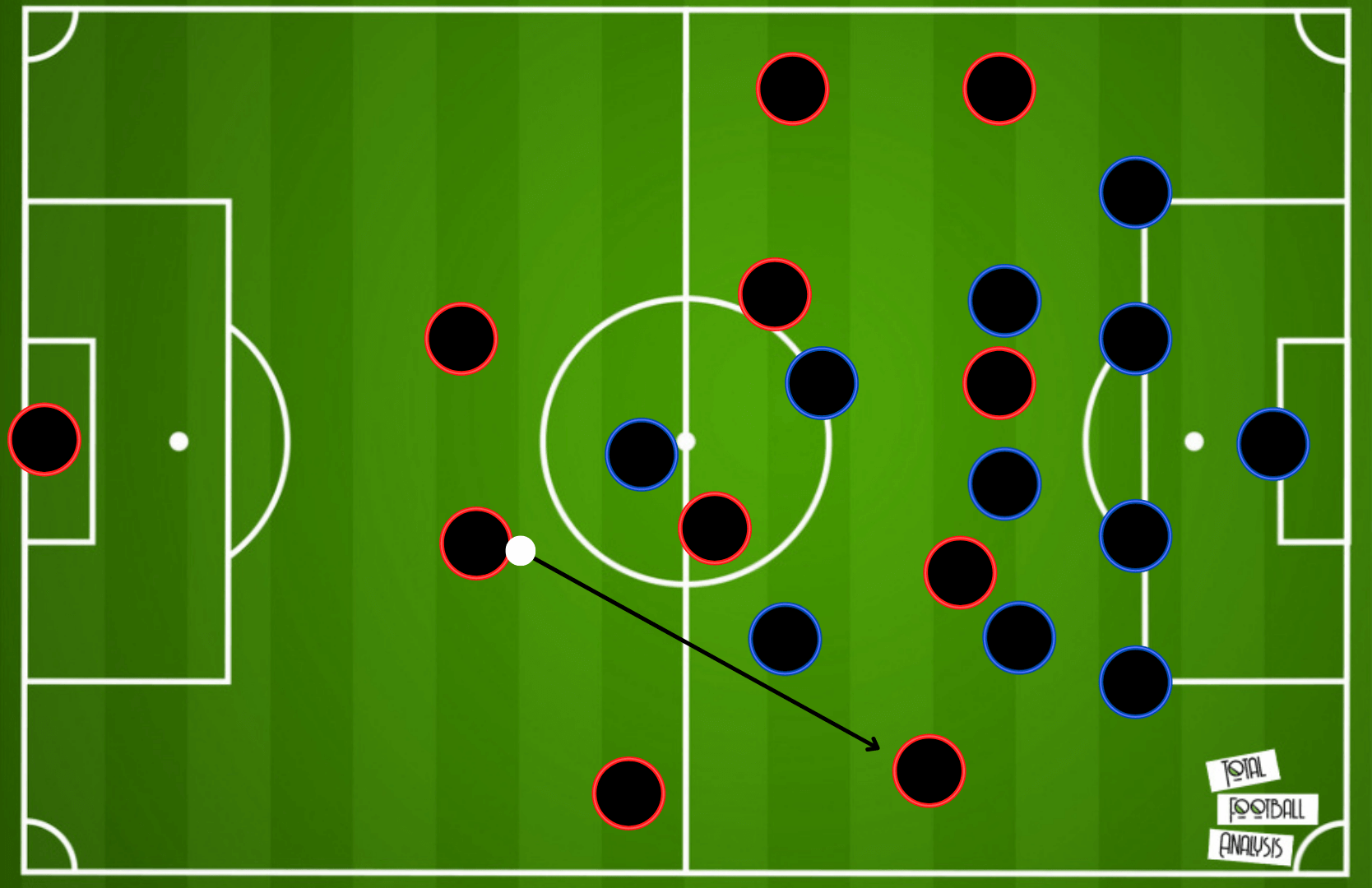 Now it’s important to also consider the fullbacks. Tierney is largely more offensive compared to either one of the right-backs, who are often used as support to Saka and Odegaard, while Tierney will often overlap and provide crosses into the box.

Depending on what side of the pitch the ball is on, the fullbacks will invert and come into the center of the pitch, usually in line with Partey, to both add defensive support and an option away from the ball.

Now from out wide, the wingers will have support from either Odegaard on the right or Xhaka or Lacazette on the left. With Saka on the ball, Odegaard can look to give an option for a 1-2 into the space, or even attack the half space to then deliver the ball into the box to Lacazette and the opposite winger attacking the back post.

However, given that Arsenal has inverted wingers on both sides, a very common pattern in the final third is for the wingers to cut inside, where Lacazette will drop off slightly from the back line, and with a ball to feet will then lay it off where Saka or Martinelli can have a great angle to shoot at goal.

In fact, Arsenal are a lot more dangerous from low driven passes into the space in front of the defense, rather than direct crosses from out wide, given mostly by the fact that their tallest offensive player is only 1.76m.

Finally, it’s important to note how dangerous Arsenal have been from counterattacks. With the energy and pace Arsenal possess up top, the team have several men capable of dribbling the ball at pace and taking on players.

All these offensive rotations have allowed Arsenal to quickly climb the Premier League table, but it’s not just their attack which has improved substantially, and the Gunners have been increasingly more aggressive and compact when looking to regain possession.

By taking a look at their PPDA, we can see how the team has steadily improved their pressing structure, and has been trending downwards throughout the season. It’s a similar story for their shots against, with the team steadily decreasing the opposition’s chances.

Let’s take a look at what they have worked on. In Arsenal’s initial press, their main objective is to push play out wide, and so will have plenty of central cover to ensure the first pass from the opposition is into the fullbacks.

To do this, Arsenal adopt a rather unique 3-4-1-2 structure. Lacazette and Saka will start in line with the centre-backs, with Odegaard shadow marking the oppositions holding midfielder. The four in midfield will usually be formed by Martinelli on the left, Xhaka and Partey in the middle, with the right fullback pushing up on the right.

The idea behind this is that it creates a lot of central cover, while also having three players immediately ready to close space on the fullbacks. This leaves the two centre-backs and Tierney as the back three to cover any balls over the top. 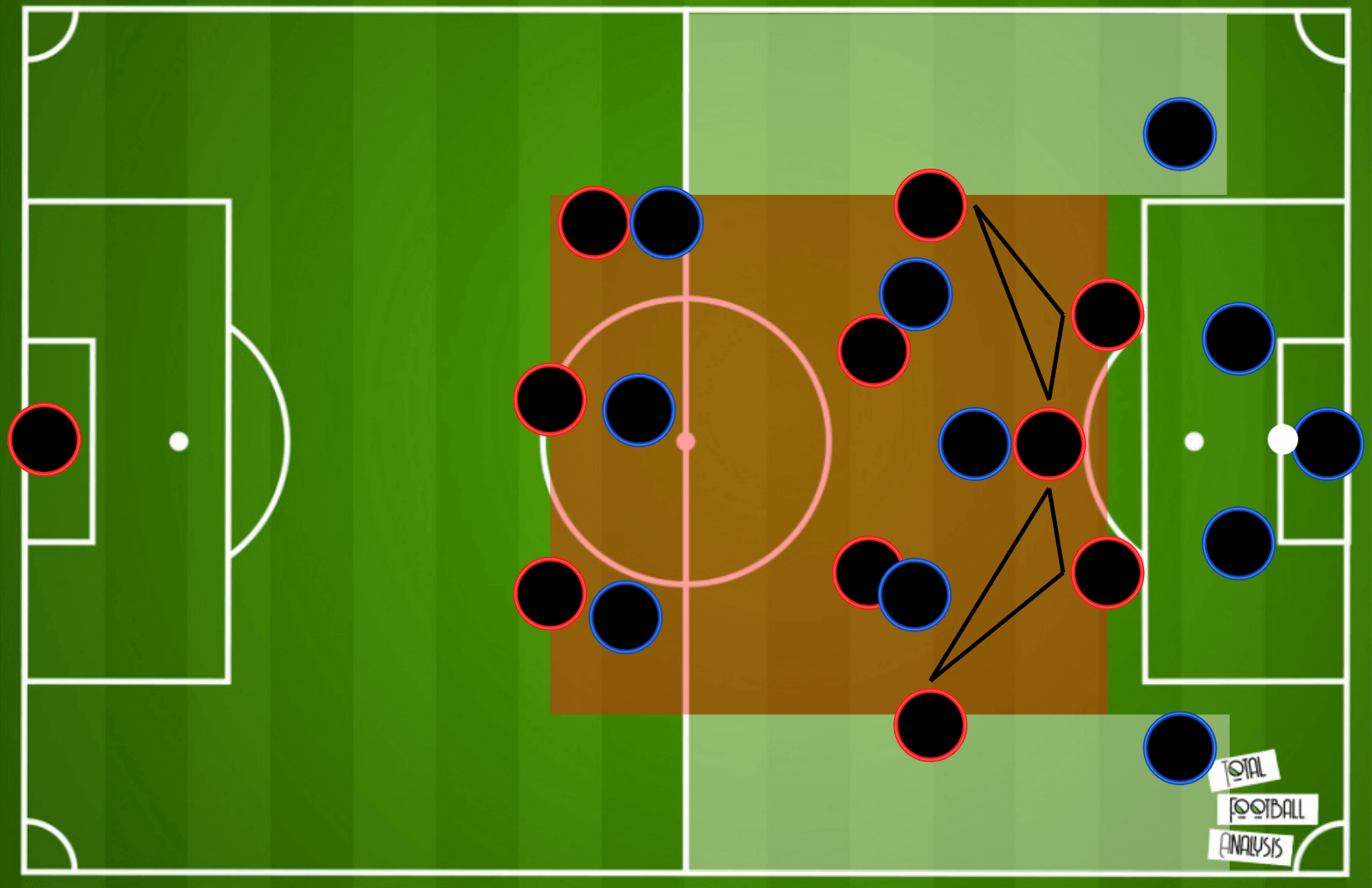 If unsuccessful in their first press, this shape can quickly rotate into a 4-4-2, with Odegaard and Lacazette up top, and the two wingers moving alongside the two holding mids. 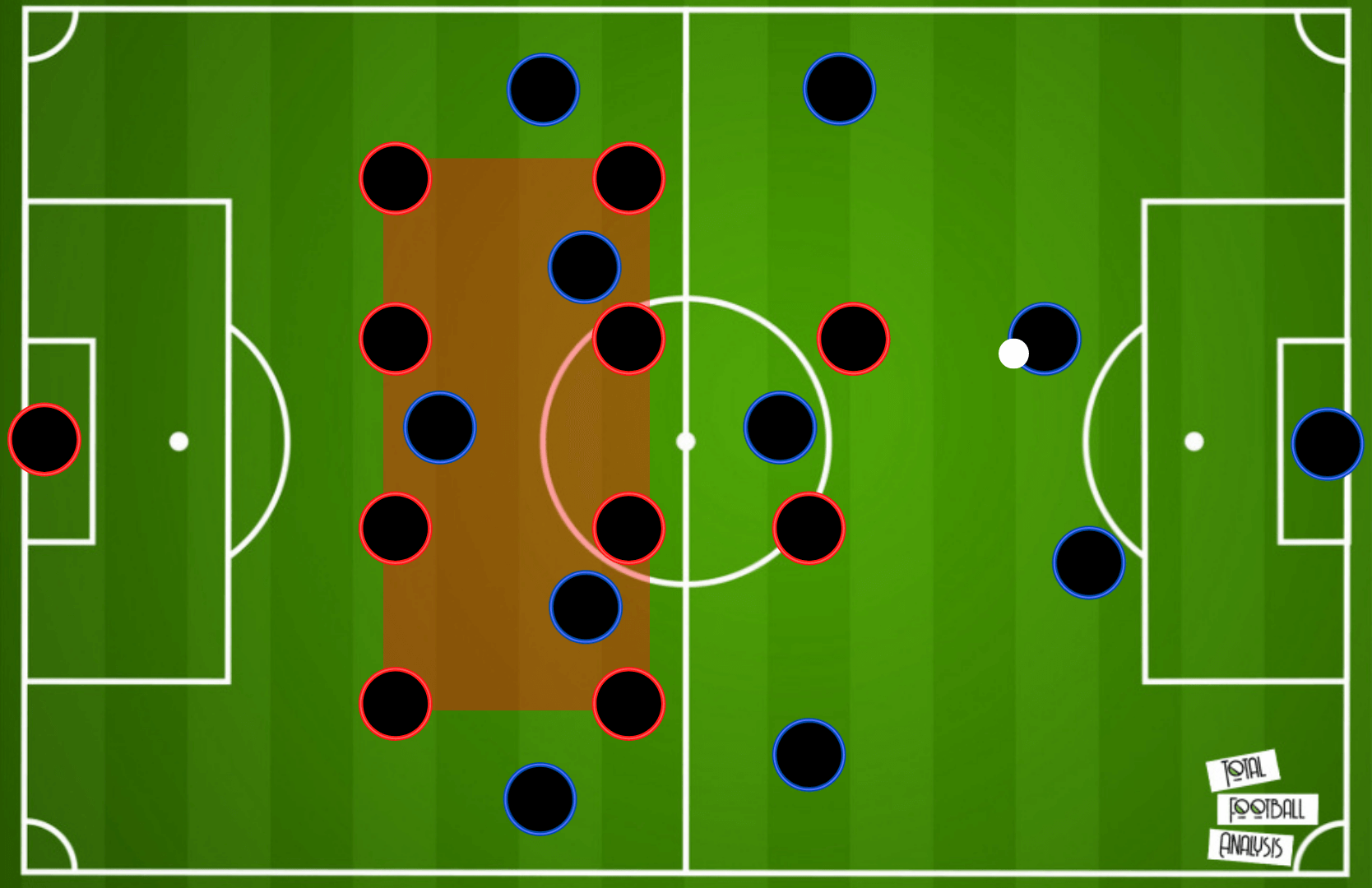 Arteta looks to keep the space between the lines as tight as possible to stop any quick vertical play, and when the ball moves out wide, both Saka and Smith Rowe have shown to have good defensive awareness, and will cover the halfspace if the fullbacks step out to press. 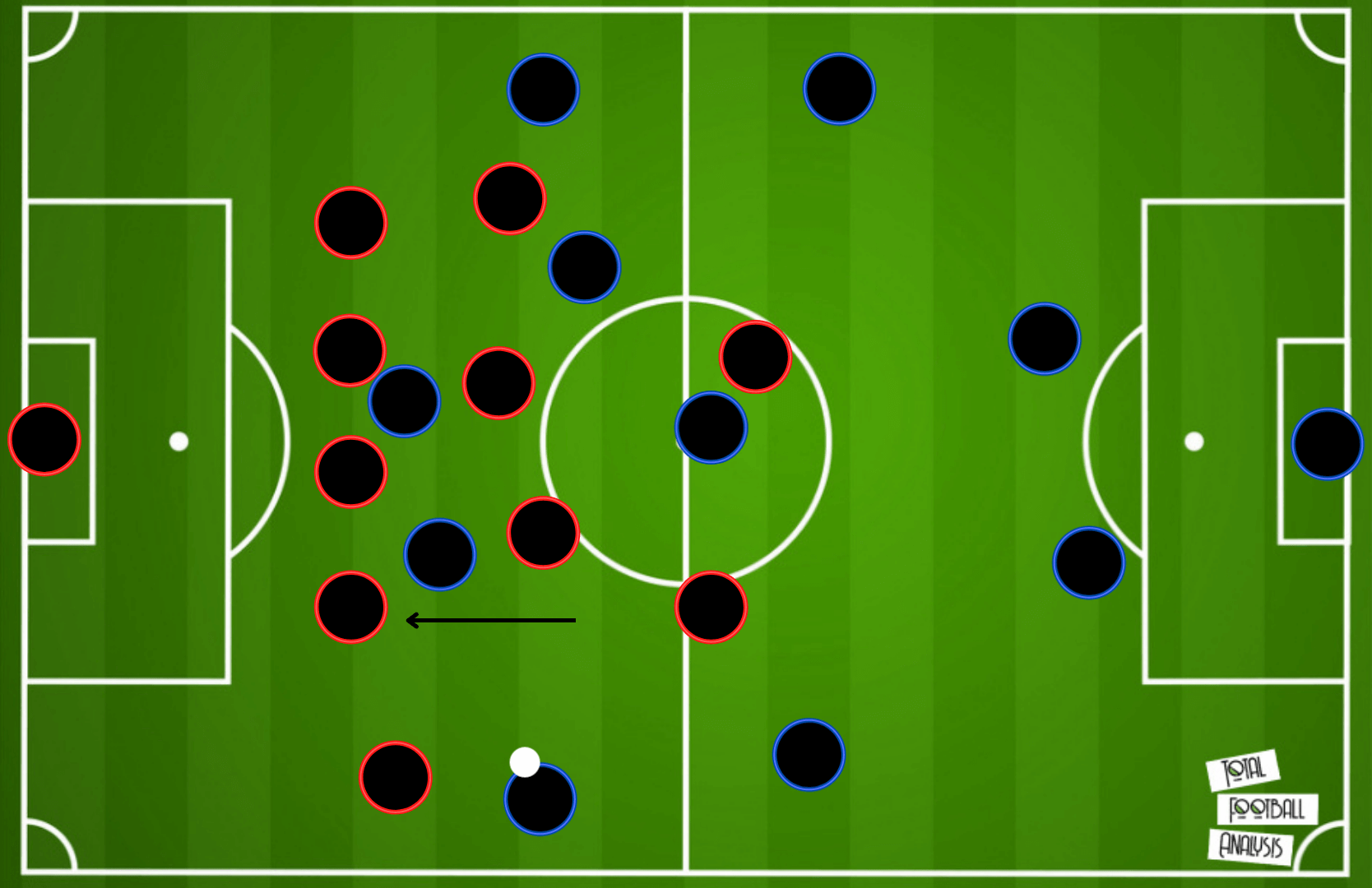 So, by pressing further up the pitch and keeping less space between the lines, Arsenal have been able to find some defensive consistency.

Arsenal have come a long way since the start of the season, but that doesn’t mean they can relax just yet, and still have some important work to be done if they are to compete with Man City, Liverpool or Chelsea. So, what’s missing? Well, firstly time, and secondly, more squad depth. While Arteta has found a relatively consistent starting eleven, some positions are left worryingly unprotected, and an injury to key players such as Partey, White or Lacazette could leave Arsenal with some trouble. Overall, this Arsenal squad is only one or two signings away from regaining their status as a consistent top-four finisher.