In this video, we explain Kieran McKenna’s philosophy and tactics at Ipswich as they push for promotion from League One. Our tactical analysis examines his preferred systems and unveils what his overall principles look like.

It was the year 2001 when Ipswich Town had just finished a great season in the Premier League after being promoted from the First Division. That season, they finished fifth in the table, which meant that they could enter the first qualifying round of the UEFA Cup. George Burley, the coach, was quite beloved given the achievement of such a good season for the team, especially after what was their first season after promotion.

However, the following year was going to be a nightmare that didn’t seem to have started that way. Ipswich defeated a European great, Inter Milan, 1-0 in the first leg of the third qualifying round of the UEFA Cup. They were then beaten as the Italians came back with a 3-1 result at the Giuseppe Meazza. Through performance and effort, they came close to achieving another great moment, but things began to unravel as time passed, and the team was relegated to the second tier. That was the last year they would play in the Premier League.

17 years later, consecutively playing in the EFL Championship without having achieved promotion to the Premier League again, something even worse would happen for Ipswich. The worst season in years was happening — they were relegated to the third division, finishing at the bottom of the league. That same season, a man who would be important later on for Ipswich, would become one of José Mourinho‘s coaches at Manchester United: Kieran McKenna.

Since he arrived in 2021 to become head coach of the Tractor Boys, he has taken charge of 52 games, overseeing 28 wins, 14 draws and 10 losses. Before his arrival in 2021/22, the team had won seven games, drawn eight and lost eight. After the dismissal of Paul Cook and the entry of McKenna, the team remained between ninth and 11th, registering 10 wins, nine draws and four losses.

The start of the 2022/23 campaign has been impressive. They remain in second place after 22 games, achieving 13 wins, six draws and three losses. They’ve scored 41 goals — the most scored in the league tied with Plymouth Argyle — and conceded 22 goals. Additionally, their way of playing has caught the eye. They favour lengthy periods of possession and rapid progressions after surpassing the first line, relying on the technical quality of players such as Wes Burns, Cameron Humphreys and Conor Chaplin — to name a few.

This will be a tactical analysis to examine Kieran McKenna’s attacking tactics in the Ipswich team, as well as an analysis of the players’ roles, what he has to offer and what must continue to improve. 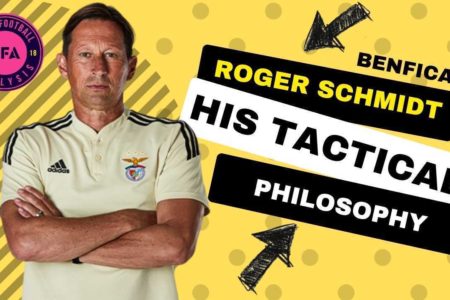 In this video, we explain Roger Schmidt’s philosophy and tactics during his Liga NOS time at Benfica. Our tactical analysis […]