Data analysis: Using data to assess some of the biggest transfers so far this summer

The summer transfer is in full flow at this point and we have seen a number of teams being extremely aggressive already when it comes to identifying and signing the players that they believe will make the difference for them next season. One of the most interesting aspects of the window so far has been that two of the best teams in the game (Liverpool and Manchester City) have been future-proofing their squads with the signing of forward players who change the dynamic of their attacks going forward.

While those two transfers, which we will go into in more depth later in this piece, are interesting, there have been a number of other movements around Europe that have also caught the eye. Indeed, there is a sense that the dominos are just starting to fall and that some of these more high-profile transfers, and the amount of money that is changing hands, will see the level of transfers start to increase as clubs look to replace these outgoing players, and so the cycle of the transfer market will continue.

We have started to see a trend emerge, which has actually been present in the German Bundesliga for some time, in that teams are trying to get their business done as early in the summer as they can. This does, of course, make a lot of sense as signing players early allows you to integrate them into your first team and have them ready for the start of pre-season training. Smarter clubs, again like Liverpool and Manchester City, are completing their business and targetting players who will benefit their squad both in the short term and in the medium to long term.

One of the hardest things to do as a football club is to effectively plan and refresh your squad. Succession planning and future-proofing are very important but difficult to do. If you still have resources in terms of wages, tied up in a position in the first team, then it is difficult to bring in a medium-term replacement for that position given the wages that you would have to spend to do so. This is why clubs are increasingly turning towards the use of data, both in terms of tracking the age profile of their squad and in finding replacements for their current players.

In this article, we will look at player data for three of the biggest deals so far and we will discuss how these players will fit into their respective new sides from a tactical perspective. All data in this article is from Wyscout and it will be converted into percentile data. This allows us to compare those players against all others in their league in the same position. 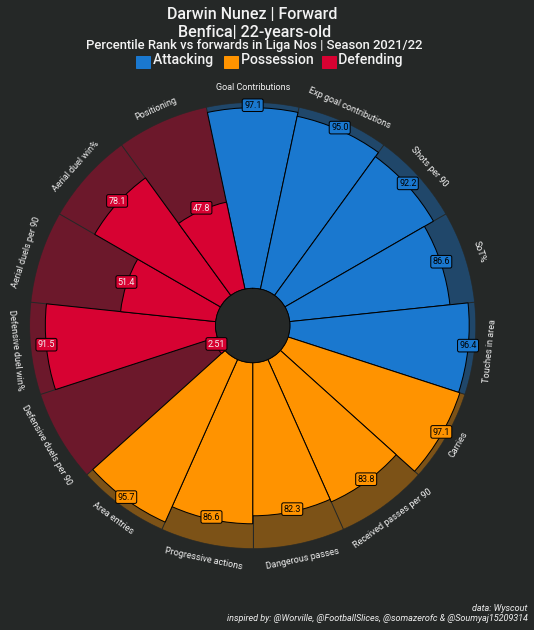 There was a sense of shock when, before the Champions League final, the Senegalese international Sadio Mane suddenly made noises that he was ready to leave Liverpool. This was confirmed after the match as Mane made it clear that he wanted to move on in order to seek a new challenge. In truth, though this moment was coming. The famous front three of Liverpool of Sadio Mane, Roberto Firmino and Mohamed Salah are ageing and despite still being extremely effective on the pitch there is a sense that the club have to start planning for the future.

We have already seen that from Liverpool with the signing in January of the Colombian international winger Luis Diaz from FC Porto. While we might have expected Diaz to need time to adapt to the English game but this was not the case as he became an important player over the course of the second half of the season. Diaz is a left-sided attacker and as such his signing displaced Mane slightly with the Senegalese forward moving centrally in the 4-3-3 system. Now, with Mane making it clear that he wants to leave, we have seen Liverpool act quickly to sign a central striker who could well play for them for the next decade in Darwin Nunez.

We first wrote about the potential of Darwin Nunez back in March 2020 in a piece looking at the best forwards in the second tiers of Europe. You can read that piece here.

In completing this signing Liverpool have signed a forward who will fit the tactical style of Jurgen Klopp to perfection. Nunez is an aggressive attacker who will press and close down the opposition defenders throughout the whole match but it is in the attacking phase that he really comes to life. He wants to attack from the left half-space or the central areas and this will allow Salah to position himself in the right-half space. As you can see from the pizza chart above Nunez is very strong both from the attacking and ball progression phases of the game. His performances in front of goal, both in terms of goal contributions and expected goal contributions, are extremely strong but crucially all of the underlying data is strong as well. Nunez takes shots at a high volume and hits the target, but he also occupies the penalty area and gets a lot of touches in that space.

Let’s face it, Liverpool rarely get things wrong when it comes to signings and this one feels as though it also makes a lot of sense. We fully expect to see Nunez playing as the first-choice for the Anfield club next season. 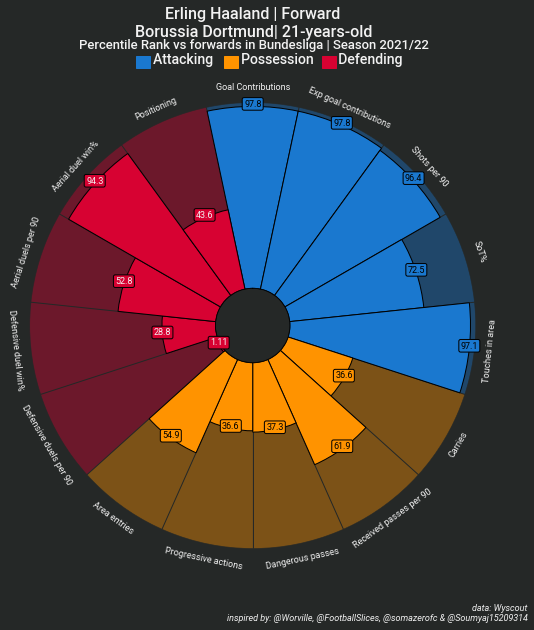 The fact that Erling Haaland was moving from Borussia Dortmund to Manchester City was one of the worst kept secrets in football. There was a point last season in which it felt as though the Norwegian international was likely to be heading to Real Madrid but the Spanish club were distracted in trying to secure Kylian Mbappe and this allowed Manchester City to accelerate their deal for the striker. In the last few days, Haaland has been officially announced as a Manchester City fan and I am sure that central defenders in the Premier League are trying to find a way to contain the 6’4″ forward.

There have been questions raised, however, around how Haaland will fit into the City system under their Spanish coach Pep Guardiola. Last season we saw City play, for the most part, without a fixed striker with an advanced midfield player occupying the ‘9’ position. This means that the forwards will be involved in linking the attack. As you can see from Haaland’s pie chart, passing and ball progression are not strengths for him (although we have to bear in mind that this data is skewed somewhat by the style of play at Dortmund).

There will be a change for City with Haaland capable of providing a focal point in the attack. He will be able to receive and link with his back to goal but he will also provide a real threat with his ability to attack quickly in transition or to play on the shoulder of the defender and his direct running will add depth to the attacking threat of City. We also have to be clear as well that City actually cross the ball a lot. This can be deeper crosses but it tends to be crosses when the wide attacker of fullback reaches the line and looks for a cutback. These situations will see Haaland be a real threat for City next season.

Erling Haaland has taken every step in his career so far in his stride and we expect this to also be the case as he adjusts to the Premier League. 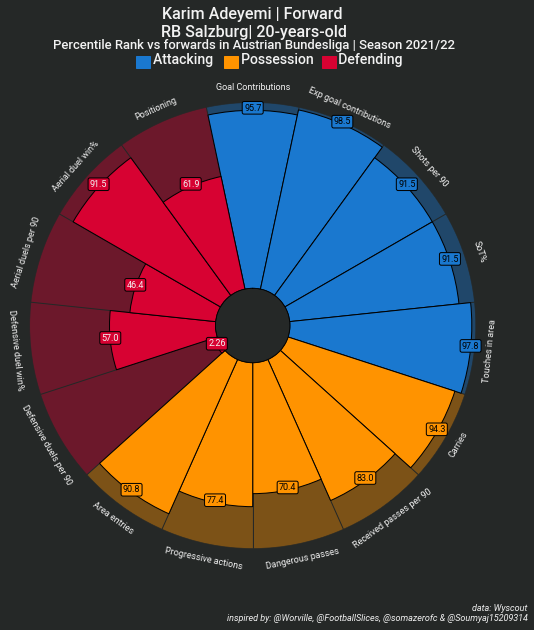 At the start of his article, we talked about the fact that smart football clubs are looking to get their business done early in the window but this is something that German sides have been doing for years. Almost as soon as it became clear that Manchester City would trigger the release clause for Erling Haaland, the German side announced the signing of Karim Adeyemi from RB Salzburg. The young German international forward was previously on the books of Bayern Munich before moving down the leagues to Unterhaching and then being targetted and signed by the Red Bull group.

Objectively speaking Adeyemi represents a very good replacement for the outgoing Haaland. Eden Terzic has returned to the German club to replace Marco Rose and he is likely to take the club back to their counter-pressing and transitional style of play. While Haaland is extremely quick and capable of stretching the play, Adeyemi is even quicker. He has blistering top-line pace with the ability to drive in or out of possession and to carry the attack at the opposition. While we have to understand that Adeyemi spent last season playing for one of the most dominant teams, on a domestic level, in Europe. As such his attacking metrics are through the roof with huge outputs for goal contributions and expected goal contributions as well as good outputs for shots and touches in the area.

Adeyemi is also better than Haaland when it comes to progressing the ball and creating. He carries the ball extremely well and accesses the penalty area at a high rate.

Whilst we think it would be wrong to come anywhere near to suggesting that Adeyemi is an upgrade on Haaland, he is not there yet. However, from a systemic perspective, you can argue that Adeyemi will be a slightly better fit for Dortmund under Terzic.

In this article, which will be the first in a series, we have broken down three bigger deals and looked at how these players fit and their new clubs.

Going forward we will pick out a series of under-the-radar signings that we believe will represent good value for their teams going forward.