Roma have had a difficult season so far. The club sit 7th in Serie A at the time of writing. One of the few bright spots has been the young Italian Nicolo Zaniolo. Zaniolo joined Roma from Inter in the summer as part of the deal which took Radja Nainggolan to Inter. Zaniolo was thrown in at the Bernabeu in September for his debut and has impressed in recent months when given a run in the team. This tactical analysis will profile the young attacking midfielders.

Zaniolo is an attacking midfielder who has been used in a few different positions by Eusebio Di Francesco. Aside from being played as a number ten, Zaniolo has also played as a single striker and as a central midfielder.

As you’d expect from an Italian attacking midfielder, Zaniolo has very good technique and is a great passer. Zaniolo has a really good left foot and looks to influence the game with creative passing. His vision is superb which helps him spot the right runs made by teammates around him.

The below image highlights an example of this vision and passing ability. Zaniolo has possession on the left side of Roma’s attack. He spots the run of Cengiz Ünder in the penalty area and makes a perfect pass around Sergio Ramos. The Turkish winger, unfortunately, fires over the crossbar and denies Zaniolo a splendid assist. 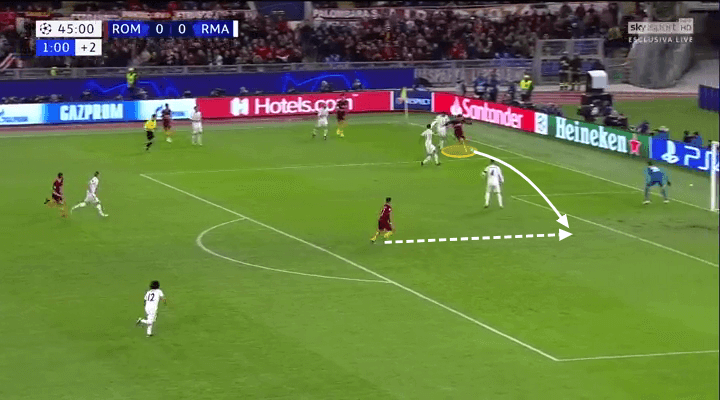 Zaniolo is also very adept at playing threatening passes while running at speed. The below image is from a game with Italy’s U19’s. Zaniolo moves forward with the ball and plays a pass in-behind for his teammate who scores. With his left foot, Zaniolo is particularly dangerous from the right-sided half-space where he can slip through through-balls to strikers running at pace. 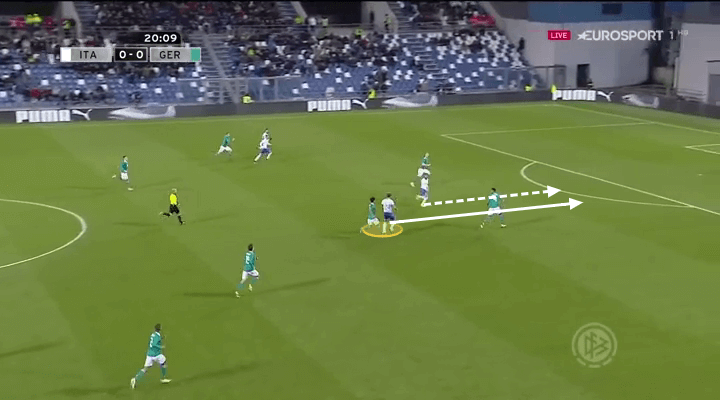 In the away game at Juventus Zaniolo started as the left-sided of three central midfielders. In this position, he impressed with his maturity and calmness in possession. The below image is one example. As Fazio makes the pass to Zaniolo he has three Juventus-players around him. Impressively, Zaniolo receives and calmly turns inwards away from the opponents to then switch the point of attack to Roma’s right. 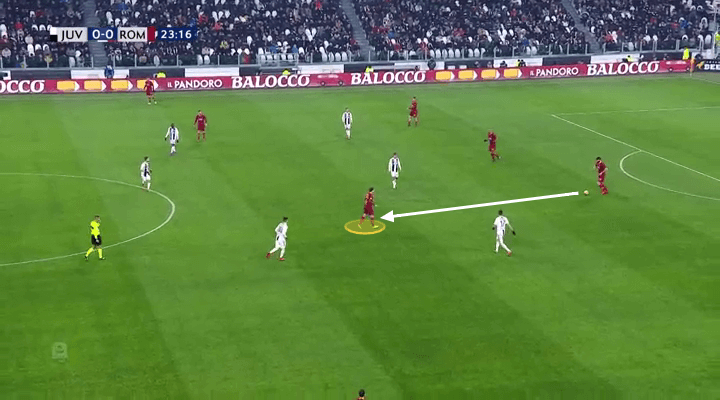 While Zaniolo is yet to register an assist for Roma as of December 26th, he has impressed with his passing, creativity and overall quality in possession. He averages 0.3 key passes per game and 20.6 passes at an average of 83.6% completion so we can probably expect an increase in his influence going forward.

Zaniolo has proved to be a very good defensive player too. As is important in a Di Francesco team, Zaniolo needs to press. Luckily he presses very well. The below image is a good demonstration of Zaniolo’s defensive contribution. Firstly he reads the pass being played to Rodrigo Bentancur. Secondly, he makes a quick pressing run towards the Uruguayan. Thirdly he wins the ball cleanly and initiates a counter-attack for Roma. 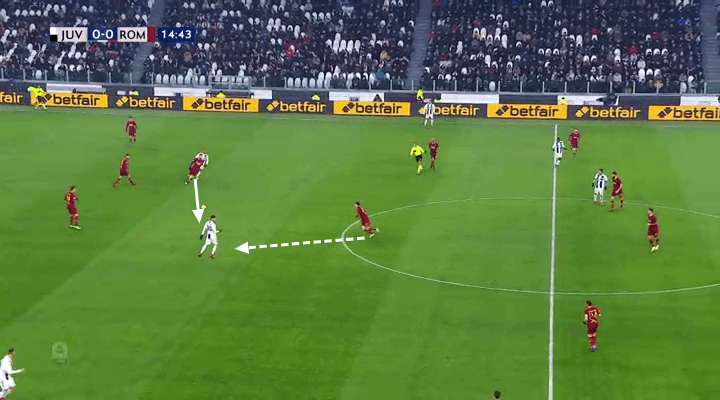 Zaniolo is a very imposing player physically with his 190 centimetres and 79 kg. This physicality, coupled with his intelligent and quickness, makes him a potentially superb defensive player too. It also means he can be a great asset to a team looking to press high up the pitch. His versatility as a striker, attacking midfielder and central midfielder will also help him develop an understanding for defensive actions in different positions which is sure to help in the future. He averages 1.5 tackles per game for Roma so far this season and makes 0.3 interceptions per game.

Clever use of his physique

As mentioned above Zaniolo has a huge physical frame. That is also very useful in an attacking sense and not only defensively. His physique is particularly handy when holding off opponents to protect the ball. Thanks to a bigger body it’s harder for opponents to get around the Italian and he can, therefore, protect the ball well.

The below image is a good example of this ability. Bryan Cristante wins a header and the ball travels towards Zaniolo. He lets the ball roll across his body and blocks the Genoa midfielder from getting access to the ball. By using his body in this way Zaniolo can then turn forward and progress the attack. 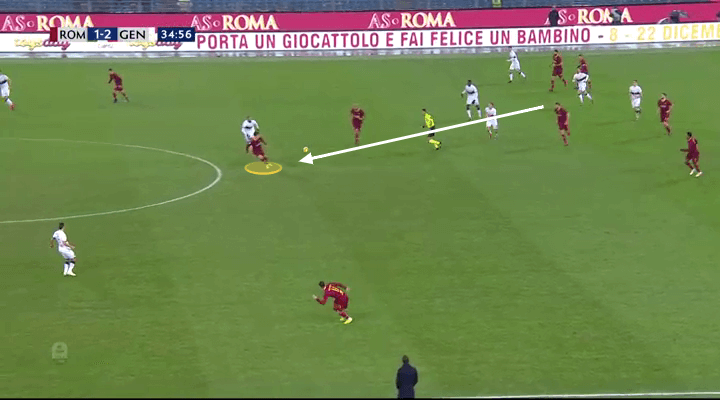 Zaniolo is very clever in the way he uses his body in these types of situations. It highlights a remarkable football intelligence from the 19-year-old attacker. Added to his technical ability this makes him capable of playing under virtually every coach in every style of play there is.

The 19-year-old midfielder has already been called up to train with Roberto Mancini’s Italian senior squad and his future looks very bright. If Nicolo Zaniolo can continue performing in the way he is then Roma will have a future superstar on their hands. For Zaniolo this can mean a move to one of Europe’s big clubs in the not so distant future. With Roma struggling at the minute, Zaniolo can have a new coach soon. That coach would do well to continue trusting Nicolo Zaniolo.