With the introduction of modern electronic systems, match analysis has now become a reality. A reality that is widely used in the US and is gaining ground in Europe, even in small categories. In the exciting world of football placing bets on your favorite teams and making your own predictions has become very popular too. If you wish to place some bets you can visit NetBet Sport.

An important stage in the video analysis of games and training is the presentation of the results. Most coaches do not have the luxury of spending many hours collecting and understanding large amounts of information, and unfortunately, problems often arise. Therefore, the selection and presentation of results play a crucial role in the efficiency of video analysis. Once the coach has the necessary information in his hands, he must present it to the players, either individually or as a whole in the team, in the most interesting and effective way.

It is essential that coaches know why they want to use the analysis and what exactly they are looking for in the results. The four main performance aspects that can be measured are technique, tactics, fitness, and behavior. These areas can be subdivided into situations, depending on whether the team has possession of the ball (attack) or not (defense or no contact with the ball). This differentiation is very important for assessing the defensive and offensive contribution of players in different situations. For example, the analysis of the effort-performance ratio of a medium can show that this player performs well in attack but lags behind in defense.

There are many ways to analyze data. The coach may want to focus on the differentiation or uniformity of competitive behaviors in consecutive games, such as the uniformity of the physical effort of an average in ten consecutive games, based on the number of intense efforts he makes. Evidence may indicate that the player’s performance is declining during this time and that he may need to rest or have an injury. The various mistakes players make, or successful actions can also be considered. The coach can also consider the effectiveness of his tactics. When, for example, a coach changes his team’s offensive style, he can assess the effectiveness of the new tactic in a span of 10 consecutive games, comparing the shots, successful or not, with the number of completed offensive actions of the previous tactic.

In addition to the various ways of analyzing quantitative data, there are also many ways to examine performance either at the player level, or at the team level (ours or our opponent’s), but also in terms of time and type of match.

The data can be presented in various ways, such as based on time (eg total possession time in the opponent half), distance (total distance traveled), speed (eg maximum sprint speed), quantitative data (eg total number won corners), percentages (eg percentage of lost heads), ratio (eg ratio of shots inside / outside the goal) and score (eg result of the match).

It is always important that the analysis is based on the opponent’s data, the style of play of our team and the opponents, the previous performance, and, if possible, based on the expected results (from the standards of previous matches), both in individually and as a whole.

There are many methods of match analysis, oriented to either quantitative (performance data) or qualitative analysis (video analysis and game segmentation). Each of these methods has its own advantages and disadvantages. Quantitative information can help the coach make the right decisions for his team’s performance. However, the usefulness of quantitative information is limited to statistical counting and does not highlight competitive behavior in different game situations, as quality match analysis can do thanks to video analysis. The combination of quantitative and qualitative data, which is possible with SPORTSCODE GAMEBREAKER programs can bring the best results.

As mentioned earlier, although statistics are very useful, most coaches prefer to use video, either in digital or analog format. The video of a match offers elements that are beyond the objective accuracy of statistical data and require the interpretation of an experienced coach, who will be able to distinguish the technical and tactical behavior, as well as the physical performance and behavior of the players. Video analysis, therefore, provides many possibilities for the coach. Take for example the case of set phases. The simple quantitative statistical analysis will give us only the number, position, and success rate of the set phases. The video analysis, however, allows us to see how we were led to the set phase, to examine the defensive organization or the offensive formation, both of our team and the opponent, before and during the execution of the set phase, and to identify the mistakes and the successful ones. actions. If the defense shows gaps, there is a problem of overlap, the players do not return to their positions in time, all this will not be seen in the statistical-quantitative presentation, but in the video analysis, which will present the defensive behavior and positions of the players in the given phases.

The coach can also focus on a defender who is repeatedly on the wrong side of an opponent. Video analysis is also extremely useful in recording ball behavior without a ball, which is impossible to record with quantitative-statistical analysis. If, for example, the two attackers do not create enough space, the video analysis can focus and record their movements without the ball. How can a video of a match help the coach? The obvious answer is that the coach can see all 90 ‘of the match to form an overall view. However, in 99% of cases, the coach does not have the necessary time to watch the whole match and gather the necessary information. In this case, the coach may ask the team manager or an external collaborator to prepare a brief video analysis, which will contain the most important defensive and offensive phases. These phases can, in a second phase, be classified as good or bad. Depending on the points he wants to insist on, the coach may ask for a detailed analysis of a specific phase, or a specific aspect of the game, such as the set phases, or the behavior of the defense. Performance can be analyzed step by step, either in slow motion or by freezing and displaying frame-by-frame motion to highlight given movements. Finally, the coach may want to look at the team at a specific time of the match, where the team has come under particular pressure, and analyze how the team was put in a difficult position and how the players reacted. 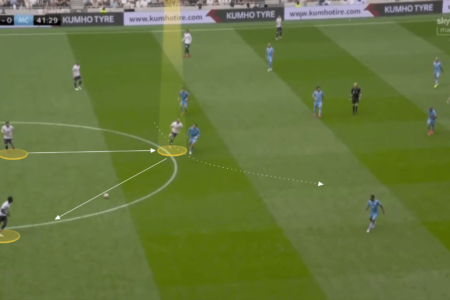