FIFA World Cup 2022: Why stopping Depay and Messi will be key for both The Netherlands and Argentina in this huge quarter-final clash – tactical preview

One of the most awaited quarter-finals in this World Cup is The Netherlands versus Argentina, where the Dutch will be looking for revenge against the Argentina team for the 2014 World Cup exit. Meanwhile, almost the entire world is rooting for Argentina so they could get one step closer to witnessing Messi lift the trophy in what is expected to be his last World Cup.

In this tactical analysis piece, we’ll be previewing the clash between these two teams by analysing their tactics and how these two teams will try to get the better of each other.

The Netherlands has so far scored 8 goals in this tournament averaging 2 per game whereas Argentina are averaging 1.75 goals per 90 so far with an overall goal tally of 7. The Dutch manage to create as many as 6 chances per game while Argentina manages to create 10 chances per game. This pretty much summarises the team’s attacking performance so far. The Dutch have been very good at finishing and making use of their chances whereas the Copa America winners still need to convert their chances to perform better. We’ll look more into the numbers of these teams in the upcoming sessions of the analysis.

The Netherlands are expected to line up in the same formation as they did against the USA in a 3-1 win which is the 3-4-2-1 formation. Andries Noppert will stand in between the posts while the three at the back will be formed by Jurrien Timber, Virgil van Dijk and Nathan Ake. With Frenkie de Jong and Marten de Roon forming the double pivot, Daley Blind and the in-form Inter Milan‘s Denzel Dumfries would fill in the roles of left wing-back and right wing-back respectively. Everton‘s Davy Klaassen will again play behind the successful duo of Memphis Depay and Cody Gakpo upfront.

On the other hand, Argentina could see some changes. Papu Gomez who came off against Australia with a sprained ankle is expected to be replaced by Angel Di Maria who is currently back from recovery and practising with the group. Argentina will line up in a 4-3-3 formation with none other than Emiliano Martinez on the goal with Marcos Acuna, Nicolas Otamendi, Cristian Romero and Nahuel Molina forming the back four. Alexis Mac Allister, Enzo Fernandez and Rodrigo De Paul will form the mid-three while the front three would be Julian Alvarez, Angel Di Maria and Lionel Messi.

While the Netherlands are known for their fluidity in passing and high possession style of football, this World Cup look deadly in their attacking transitions. Depay plays a key role in the team’s ball progression and has been vital when the opponents are pressing high. 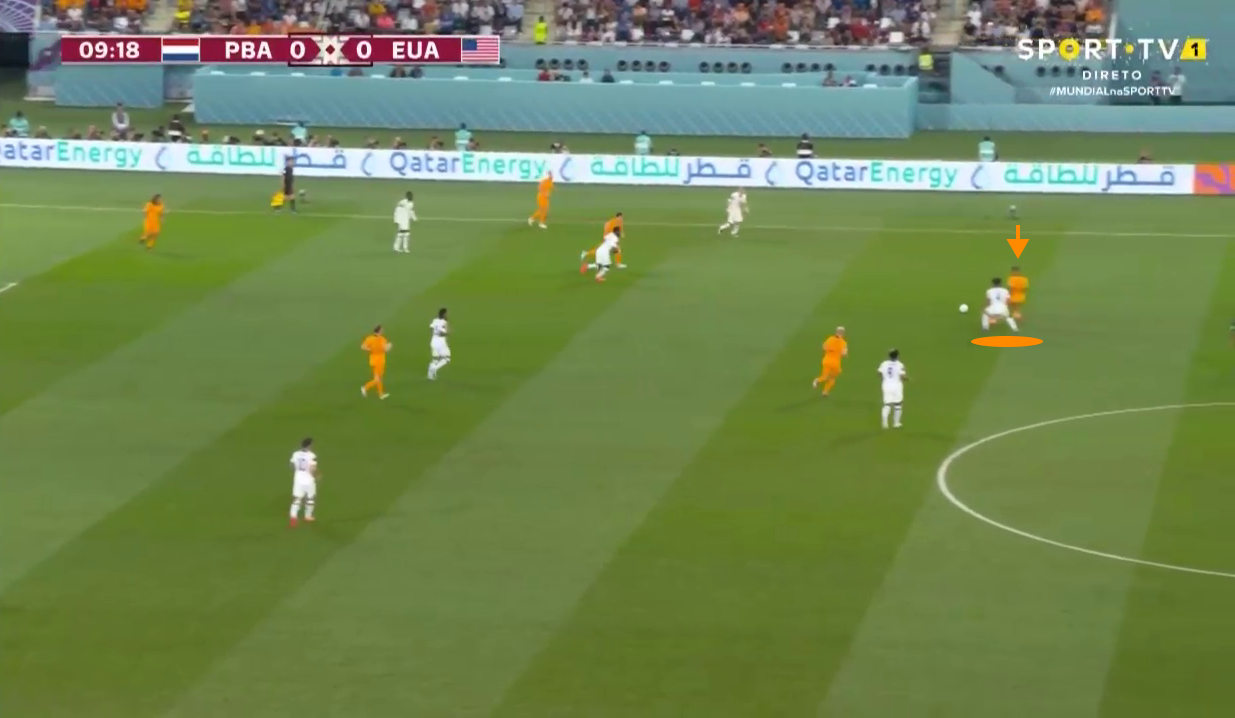 The Barcelona attacker often falls back to support while building up and has been doing that role very well acting as a key player in this situation of the game. This routine can be seen quite often in the game against Argentina, a team that presses high. Argentina have a PPDA value of 4.8, the second highest this tournament with a pressing efficiency of 56%. Depay has the technical ability to hold the ball until support arrives and is also capable of passing it into the space first time.

On their transition to attack, with just two forwards upfront and the wing-back still at the back, the Netherlands prefer to pass the ball into the flanks. 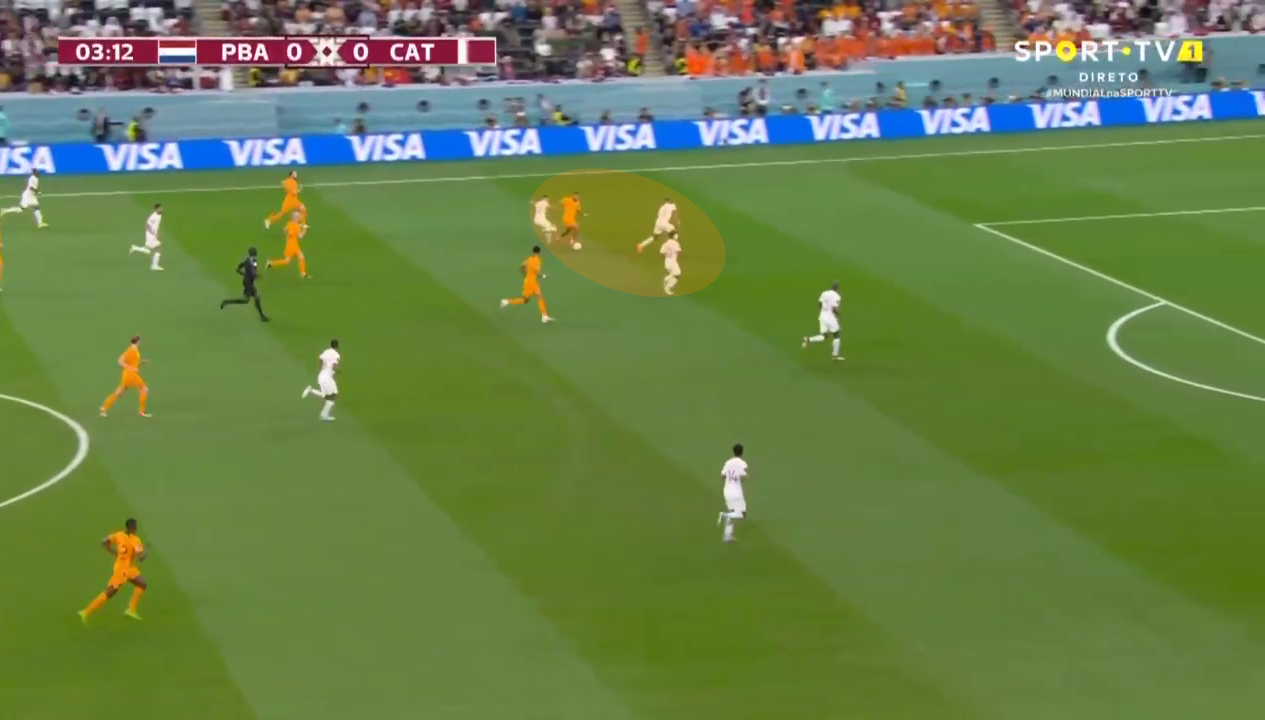 Depay once again plays a crucial role here by having the ability to take on defenders. Upon receiving in the left flank, he’s naturally able to slide in and also be able to take on multiple defenders. Now, this makes him the centre of gravity and is able to attract defenders to him, creating space for others in the zone.

Depay will play a key role in the teams’ attack and will look to cause major problems to upset Argentina. The South Americans need to come up with a tactic to nullify the influence of Depay to avoid major threats in the defending zone.

What to expect from Argentina?

To avoid Depay from causing trouble, Argentina should come up with a similar recovery plan that they applied against Poland in the group stage. 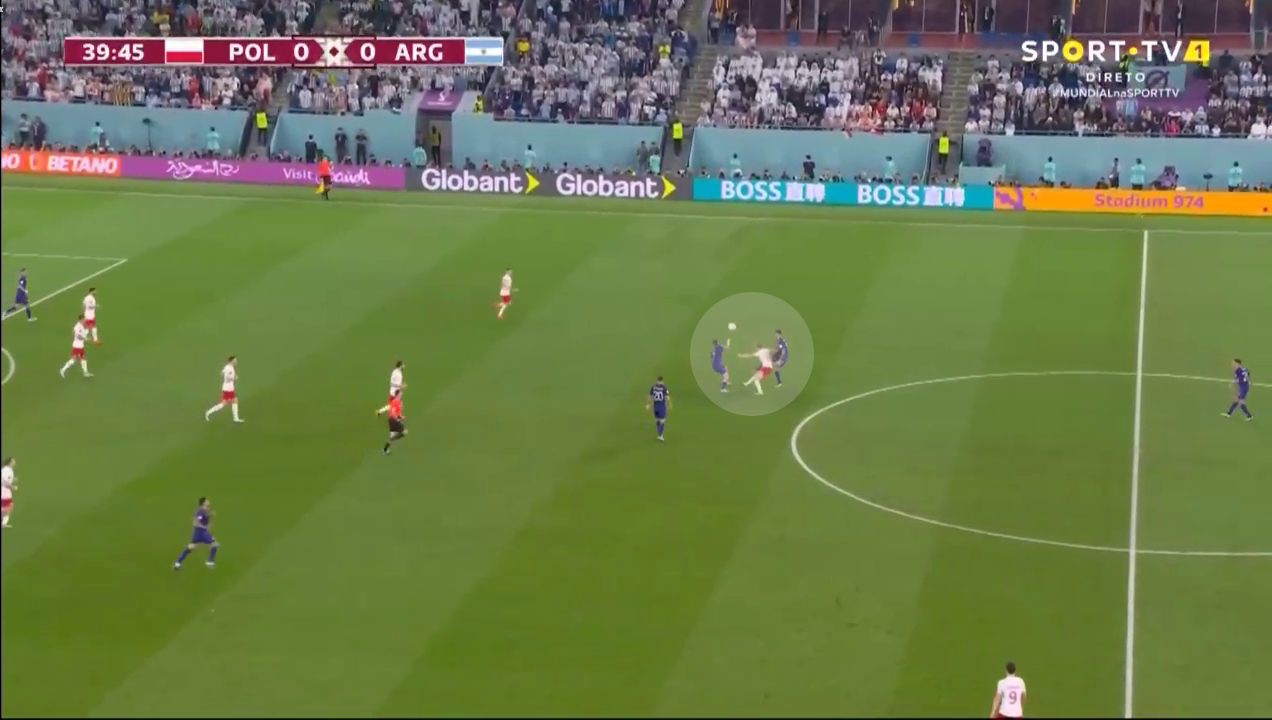 On realising Poland’s tactic to progress depended on the strikers’ ability to hold the ball and wait for support, Argentina made sure to commit two or more players every time the striker receives the ball to put pressure on the player to regain possession. Quite a number of tactical fouls were also made on Lewandowski in that game. A similar way of regaining possession from Depay can be expected from Argentina in the quarter-finals.

Argentina will look to control the game on Friday, while the Dutch will be happy to sit back just like they did against the USA. The Netherlands will form a compact 5-3-2 leaving no space for Argentina in the middle and will force them to progress through the flanks. This will also force Messi to withdraw to help with the build-up and hence remove him from the final third. Argentina would look to counter this formation by forming a 3-1-4-2 and would look to penetrate through the flanks. 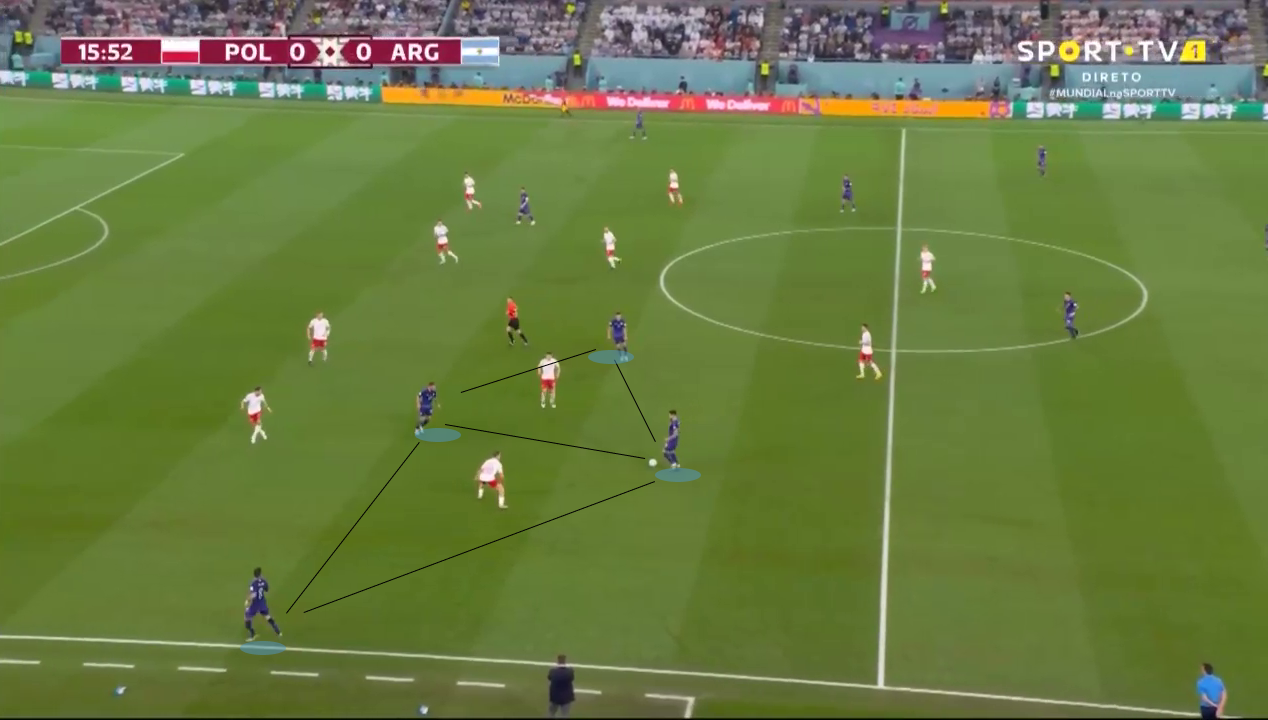 Using Messi as a decoy could be a smarter way for Argentina to create space. The Netherlands will look to add extra protection around the little man which Argentina could make full use of. Messi’s ability to attract defenders is immense. 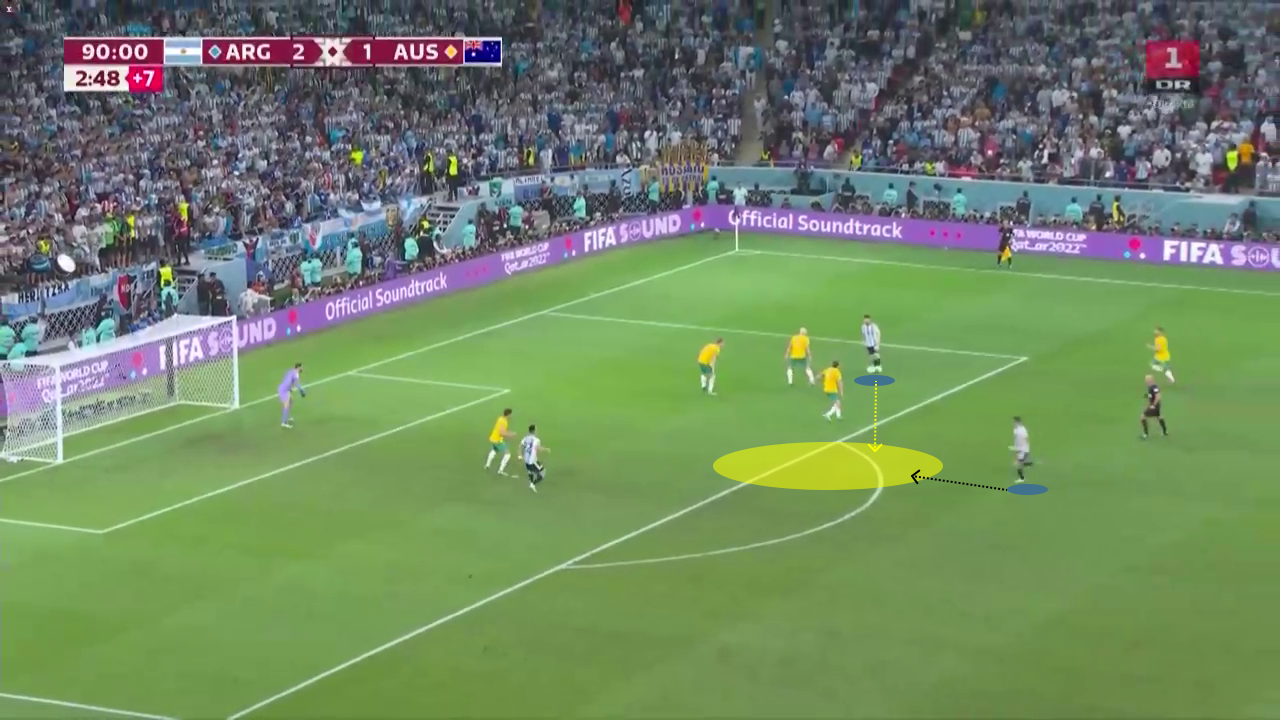 As shown in the above match image against Australia, we can see how Messi is able to attract opponents and by which he’s able to create spaces for his teammate in the centre. Against the Netherlands, Messi can play a similar role by dribbling around the penalty area to attract defenders and can create space for his teammates in crucial zones. 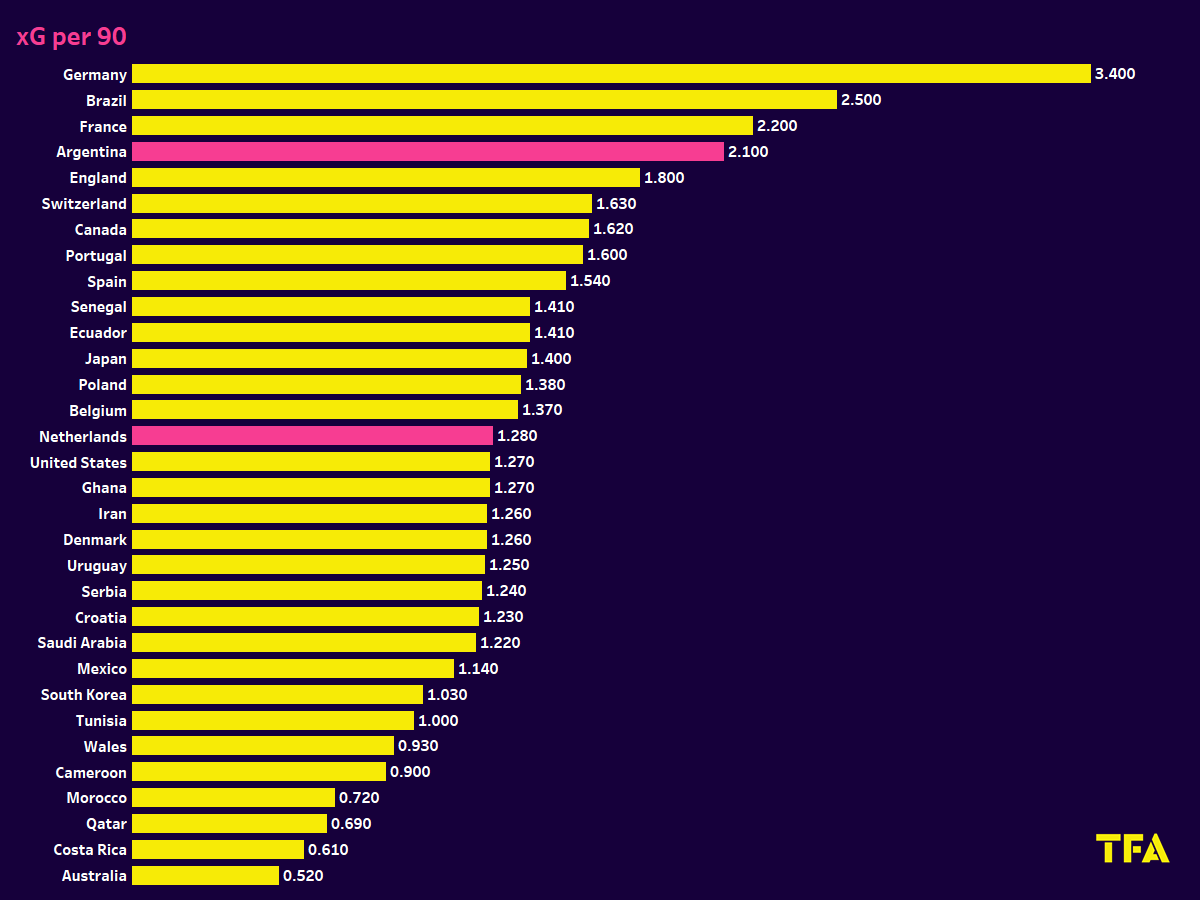 Another tactical reason behind forcing Argentina to attack through flanks is that they prefer attacking through the centre. 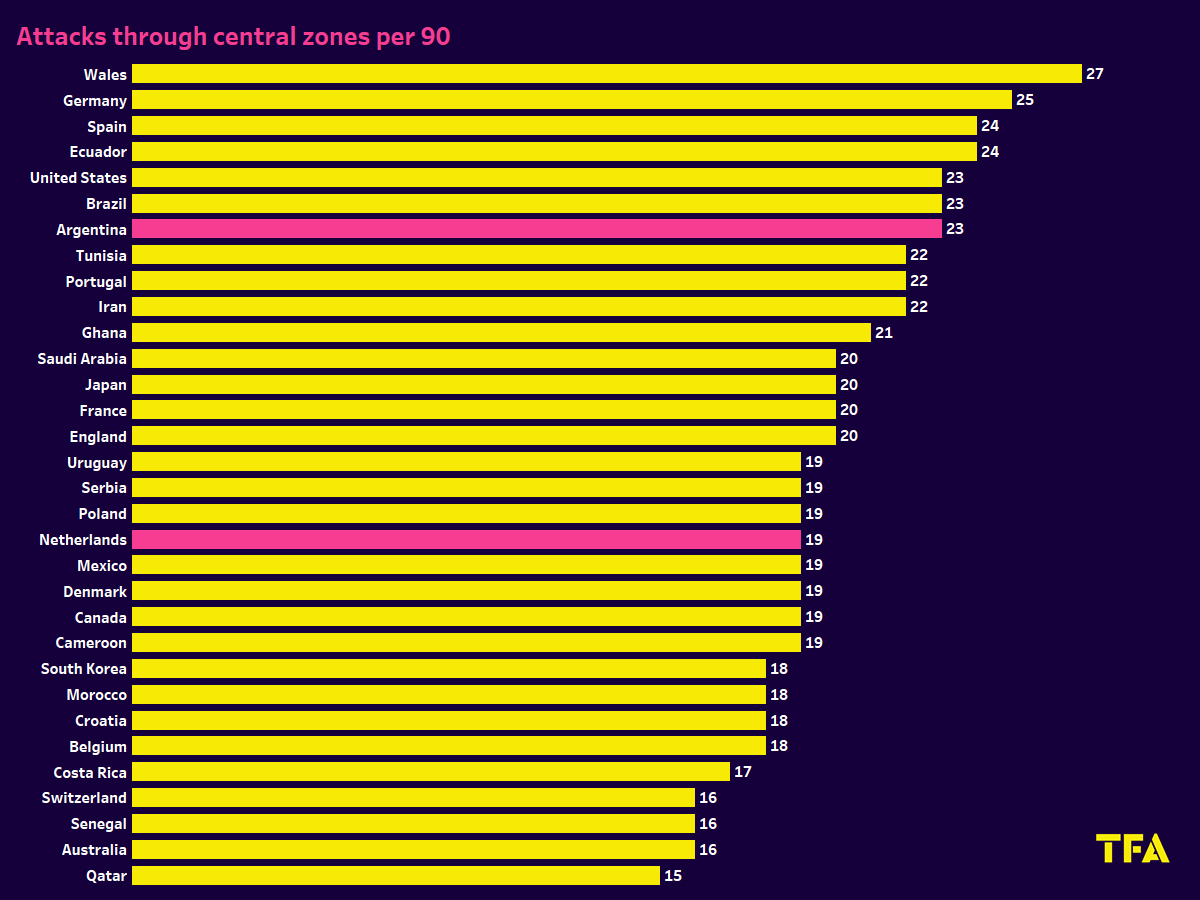 The Netherlands making the centre compact and tight would force Argentina to play through the flanks which isn’t their preferred way of progressing. Although they do have good wingers on the flanks, the team prefers to have an attack through central zones. 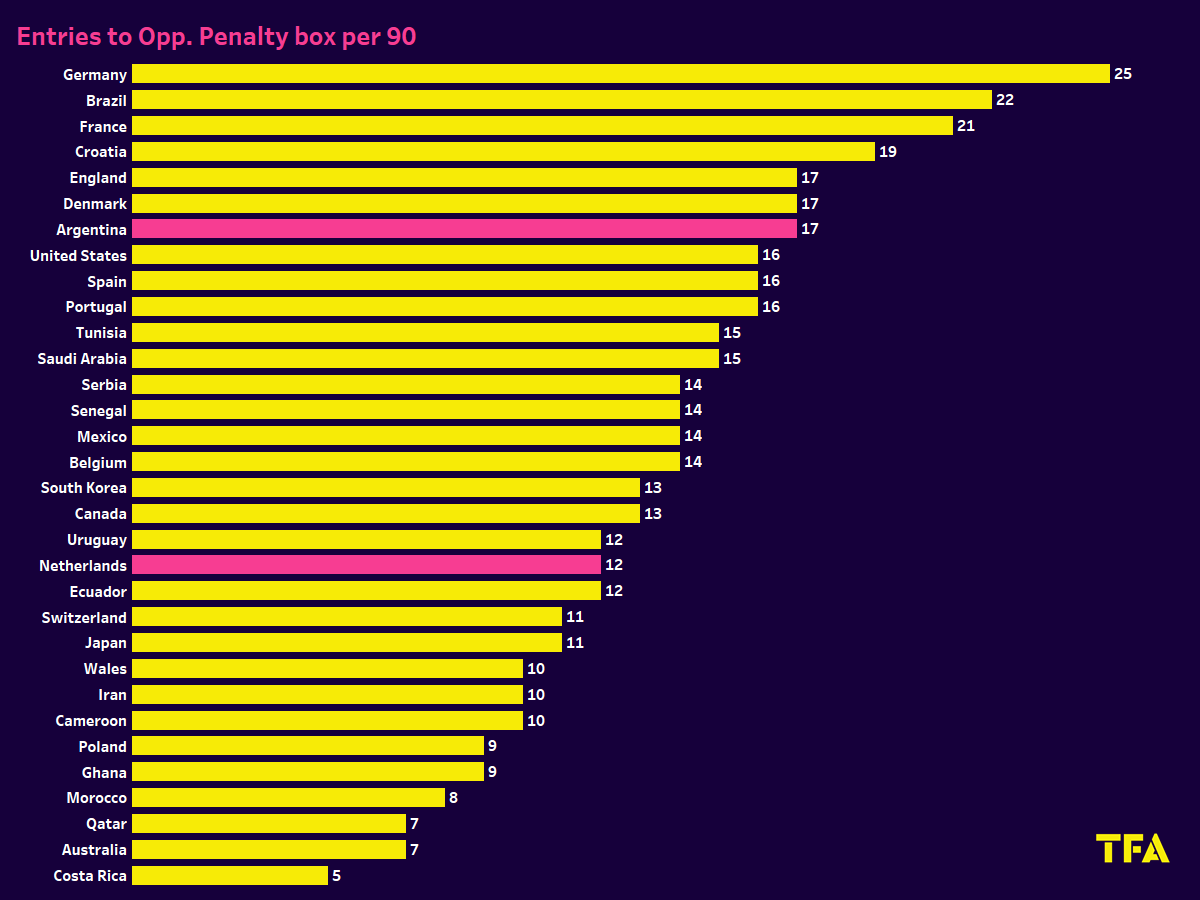 One can see from the above bar chart that Argentina has made more entries into the opponent’s penalty area than the Netherlands. Now, something that we should take away from this is that, although the Netherlands have low entrances into the penalty area, they have more goals scored than Argentina explaining how clinical they’ve been in terms of converting their chances. Argentina should be more cautious and should make it hard for the Netherlands to score goals.

Talking of which, it’s important to highlight Argentina has the lowest xG in this tournament. 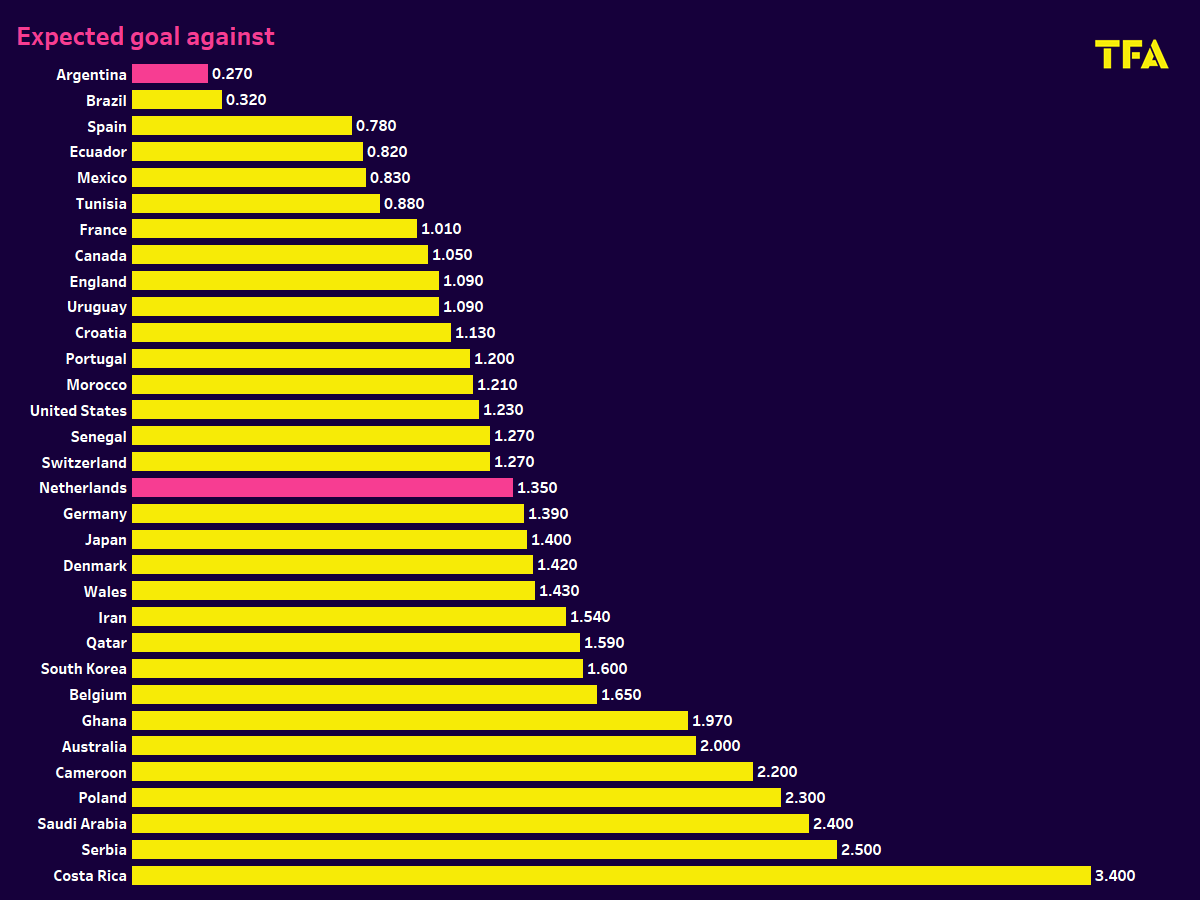 It’ll be an interesting battle this, as the Netherlands have been over-performing their xG whereas Argentina looks to have conceded the lowest xG this season meaning they give away very fewer chances to the opponents to score. Since the Netherlands have been clinical this tournament, it would be interesting to see how they make use of the minimal opportunities put in front of them.

It’ll be an interesting battle in the quarter-final and the key for Argentina to win would be to stop the Netherlands’ transition to attack quickly and also to convert their chances. It’ll important for them to hold on to possession and patiently wait for the chance to penetrate.

On the other hand, the Netherlands should focus on not giving away chances and should look to be clinical with their chances. With both teams having equal opportunity to seal their spot in the top four, this game will be full of twists and turns until the very end.