Arsenal and Chelsea faced off against each other for the finals of the Europa League 2018/19. Both teams, separated by just a few miles, had to travel over 4000 kilometres to Baku, Azerbaijan.

This was the most important match of the season for both teams as it was the only opportunity to win some silverware. Both managers needed the victory – there were rumours surrounding Maurizio Sarri’s future at Stamford Bridge if he failed to win the Europa League. Unai Emery and Arsenal needed to win even more as this was their only route to ensure Champions League football next season.

This was the first European final Arsenal were in in thirteen years and the stakes couldn’t be higher for them.

In this tactical analysis, we’ll move away from the geopolitical issues surrounding the much-anticipated final including the fan allocations, Henrikh Mkhitaryan’s absence, and UEFA’s inaction on that matter and focus on how Chelsea thumped Arsenal resoundingly to win the first major trophy in Maurizio Sarri’s managing career.

Sarri lined the blues up in his favoured 4-3-3. N’golo Kanté was the final addition to the side after he was declared fit to play later on during the day. He also favoured Olivier Giroud over Gonzalo Higuain because of the ex-Gunner’s mobility and higher work-rate. Matteo Kovačić started as the left midfielder while Pedro started on the right wing over Willian.

For Arsenal, Emery chose the three-man defence with a 3-4-1-2. Petr Čech started against his former club for the last match of his career, while Laurent Koscielny and Sokratis were the centre-back pairing. The midfield pivot chosen was that of Granit Xhaka and Lucas Torreira with the strong trio of Mesut Özil, Alexandre Lacazette, and Pierre-Emerick Aubameyang. 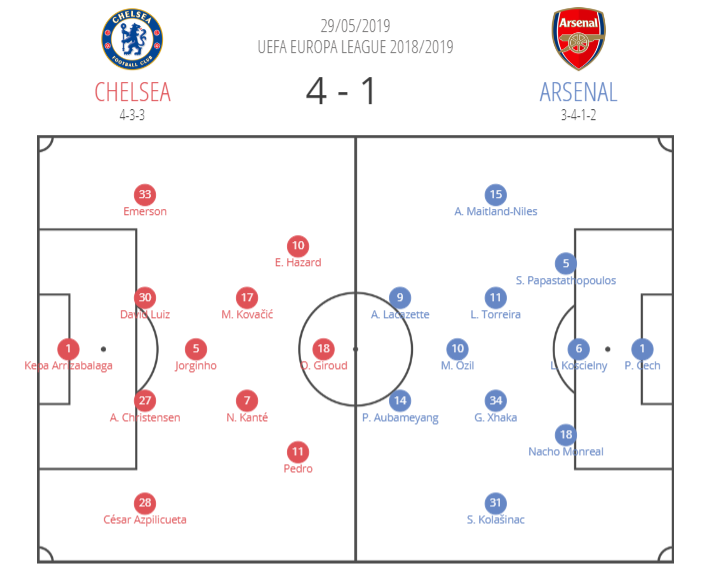 A tale of two halves

Both teams had by-and-large similar performance in the first half with neither side dominating each other. It might even be said that Arsenal were the better team in the first half if chances created are considered. Chelsea pressed aggressively up the pitch and saw more of the ball in the first half. However, they failed to create any clear-cut chances from high-quality areas.

Arsenal lined up in their 3-4-1-2 in possession. The wingbacks stayed up high when Arsenal had the ball. Chelsea’s midfield was narrow. They were focused on protecting the centre. Arsenal did not have much difficulty reaching the middle third. This is because Arsenal mostly build through the wings. The outer centre-backs passed up to their respective wingbacks who tried to play it further down the flank to the striker making the run into space.

The setup was theoretically perfect in exploiting the underload that Chelsea had on their flank. Arsenal created a few chances this way but poor finishing, as well as bad decision-making in the final third, resulted in Arsenal squandering away a lot of good chances. As can be seen in the picture below, the wing-oriented offence was Arsenal’s most used way to move up the flanks. 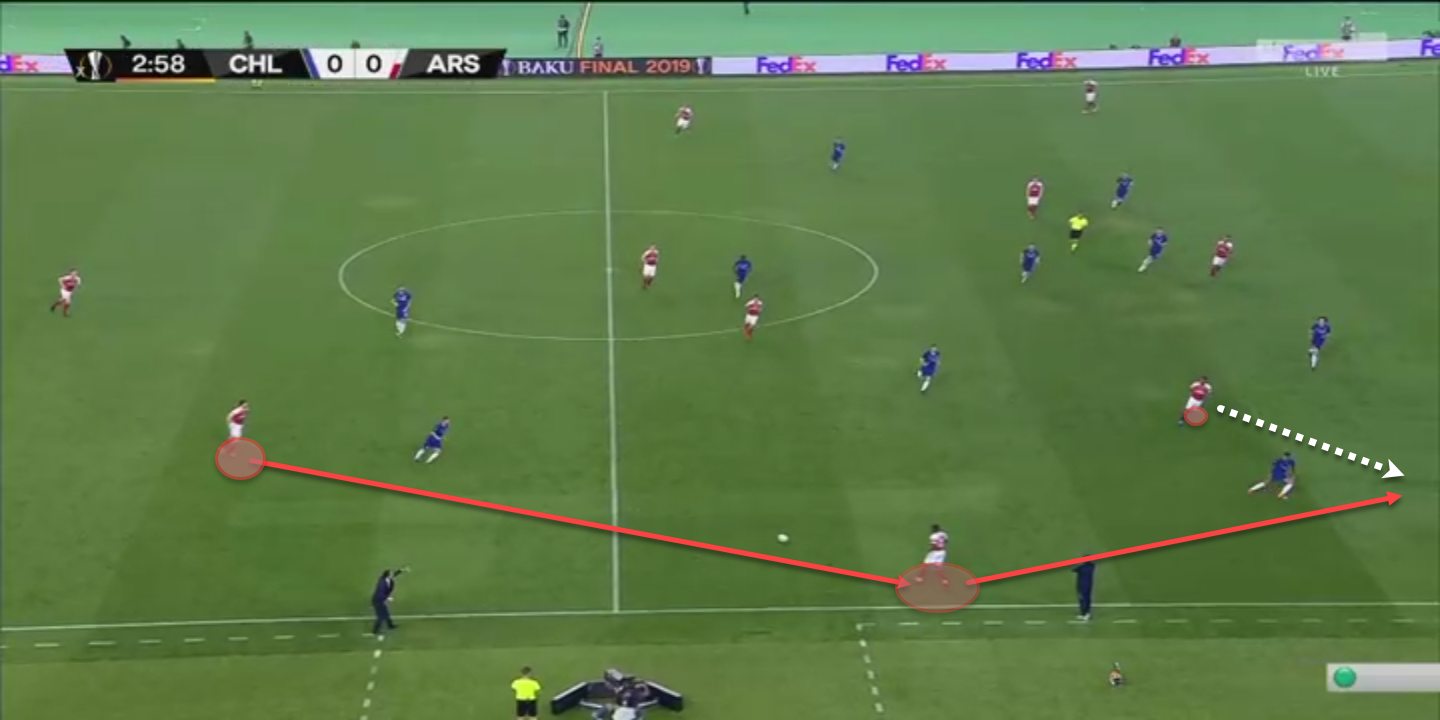 Arsenal, however, should have better used these overloads in the wide areas as Kanté was over-worked. He had to work between pressing the Arsenal defensive midfielders as well as helping his full-back in dealing with Kolašinac. But his incredible work-rate made it even more difficult for Arsenal to make anything out of the natural flaws in Chelsea’s structure.

Arsenal had a clear plan out-of-possession to deal with Eden Hazard. When facing Chelsea, many teams decide to mark out Jorginho as he’s the engine of the Chelsea midfield.

However, Hazard can change games single-handedly and Emery focused on doing the latter instead of the former. Arsenal could have been helped majorly by the availability of either of Aaron Ramsey or Mkhitaryan as they best suited the profile of someone needed to mark Jorginho out of the game.

Özil played that role in this match but not possessing the defensive intelligence of Ramsey, Emery had decided to leave Jorginho once Chelsea had progressed into the middle third. Instead, the focus turned on Hazard

When Hazard moved out wide to receive the ball, Maitland-Niles was the one marking him. He ensured that he didn’t have space to turn when he got the ball. As we can see below, as soon as Hazard moves into an open passing lane, Maitland-Niles moves tight with him.

Arsenal’s press and its flaws

Arsenal pressed high up the pitch during the initial stage of the match. Their set-up mirrored their initial set-up – the strikers picked up both of the centre-backs, and Özil marked Jorginho. The deepest midfielders marked Kanté and Kovačić.

However, the full-backs, as well as the press-resistance of the Kepa, were crucial in Chelsea playing out of the Arsenal’s press. As can be seen below the only passing lanes open are the lofted passes to the full-back. Kepa has the presence of mind to see these passes and this results in Chelsea creating chances from these situations.

The most important flaw in Arsenal’s press was their set-up themselves. Arsenal’s 3-4-1-2 depended on only the wingbacks to provide the width. This also limited their press. As explained earlier Maitland-Niles was marking Hazard.

However, once Chelsea’s full-backs had the ball, Maitland-Niles had to run over forty yards upfield to press the full-back, Emerson. This can be seen in the picture below. In that case, Sokratis takes over the man-marking responsibilities of Maitland-Niles and shifts to the left channel. This further has a knock-on effect of isolating Koscielny 1v1 with Giroud.

This was similar on the other flank. As can be seen below, Azpilicueta receives the ball and has acres of space to drive forward. Note the positioning of Kolašinac who is way deeper than he should be. This results in one of the midfielders having to move outwards to press the ball-carrier.

It is worth noting that the last time Arsenal met Chelsea, they’d used a 4-4-2 diamond to counter Chelsea’s 4-3-3. This was much more effective in dealing with the open spaces on the flank as either of the midfielders and the full-back could combine to press the ball-carrier out wide. Arsenal had dominated that match and won 2-0. Perhaps a similar approach might have paid off in this match as well.

Arsenal preferred the use of the left flank to attack. This was due to a number of reasons. Firstly, Xhaka is a much better ball-progressor than Torreira. He completes more passes as well as deep completion per 90 than the Uruguayan. Secondly, Kolašinac is a greater offensive threat this season and his runs into space as well as ball-carries are one of the out-balls for Arsenal.

Arsenal took advantage of Kanté’s pressing movements early on in the game. When Monreal had the ball, Kanté would move up to press. This left the passing lane open to Kolašinac.

However, Sarri quickly noticed that Arsenal were dominating the left flank and he decided to move Pedro back. Chelsea’s shape then began to resemble a 4-4-2 with Pedro joining the midfield line.

This change can also be seen below in the tactical line-ups from UEFA. For the first fifteen minutes, Chelsea resembled their 4-3-3 but after that, Pedro moved deeper, being forced to defend the runs of Kolašinac. 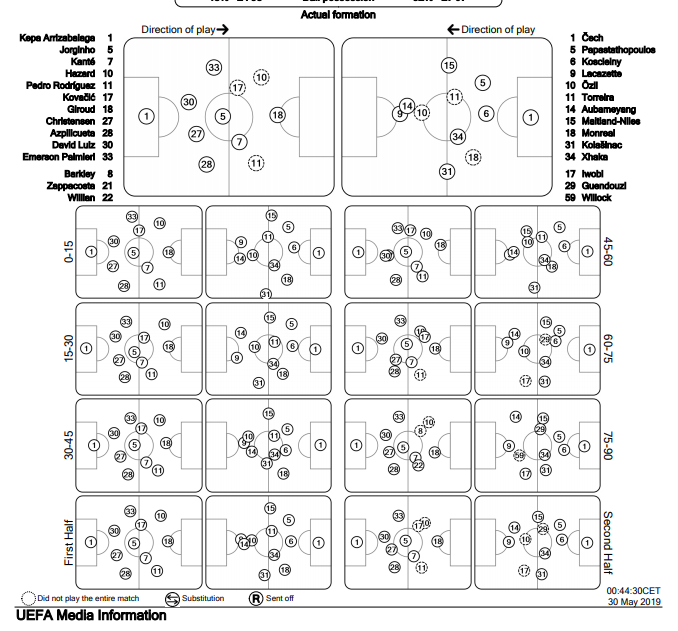 The imbalances in Arsenal’s set-up finally came due in the second half. All four of Chelsea’s goals were due to offensive transitions and losing the ball in the middle third. Maitland-Niles had been forced to run a lot to press his full-back. This inefficient pressing was probably the cause behind the Englishman not being able to track back as efficiently in the second half. This was an issue because this meant Hazard was given more latitude to operate in as his marker opted to sit deeper and create a back-five instead of defending proactively.

Furthermore, Chelsea also changed their attack a little. They were given more room to play through and they played a more fluid style of football with more sideways dribbling and more interchanging of positions. The sideways dribbling opened up gaps in Arsenal’s midfield and defensive lines.

It might be argued that Emery got his team tactics wrong with the 3-4-1-2. Not only was it sub-optimal for pressing and defending, but it also left a lot to be desired offensively. It was probably the best way to fit all of the team’s best offensive players but the structure itself was flawed.

It didn’t offer the full five lane coverage that teams need to play a positional style of football. As we can see below, there is no presence in the half-spaces. This is because the strikers are pinning back Chelsea’s back-line but there’s no one to take advantage of the spaces created subsequently.

This problem was even more evident when Arsenal had entered the final third. In the picture below, notice how Kolašinac has the ball but how there are no midfielders in between the lines. This makes it relatively easy for Chelsea to manipulate their own midfield lines as there’s no one pinning them backwards. This is however not a new problem for Arsenal.

It is indeed one of the reasons they have to adopt a more wing-oriented approach as they don’t have midfielders who are comfortable receiving with their back to the opponent’s goal. An interior midfielder is one of the areas Arsenal must improve upon so that they can change their offensive structures and make their build-up mechanisms more unpredictable.

Arsenal will be thoroughly disappointed with themselves for a terrible evening in Baku. The first half was even for both teams but the response after the first goal left a lot to be desired. The onus lies with the manager for questionable tactics and the defence have not done themselves proud either, always looking open during defensive transitions. Arsenal need reinforcements in a lot of areas (central defence, wide areas, midfield) if they wish to improve upon their performances next season and they’ll have to approach this window very carefully.

Chelsea on the other hand, deserve this victory after an amazing second-half performance, particularly from Eden Hazard (who in all probability played his last match for the Blues). They win the Europa League with an incredible record of not having lost a single game during their entire run. Furthermore, it was Sarri’s first trophy and hopefully, his future at Stamford bridge is secure for another season.