And just like that the 2018/19 La Liga campaign is all wrapped up. The team to win it was also the team to get the last kick of the season as Barcelona, the defending and the reigning champions, travelled to Eibar for the last game and one final draw to see the competition out in a rather relaxed atmosphere.

This tactical analysis will look to break down the game that saw the end of the Spanish Primera and yet another success for the Blaugrana Catalan giant. 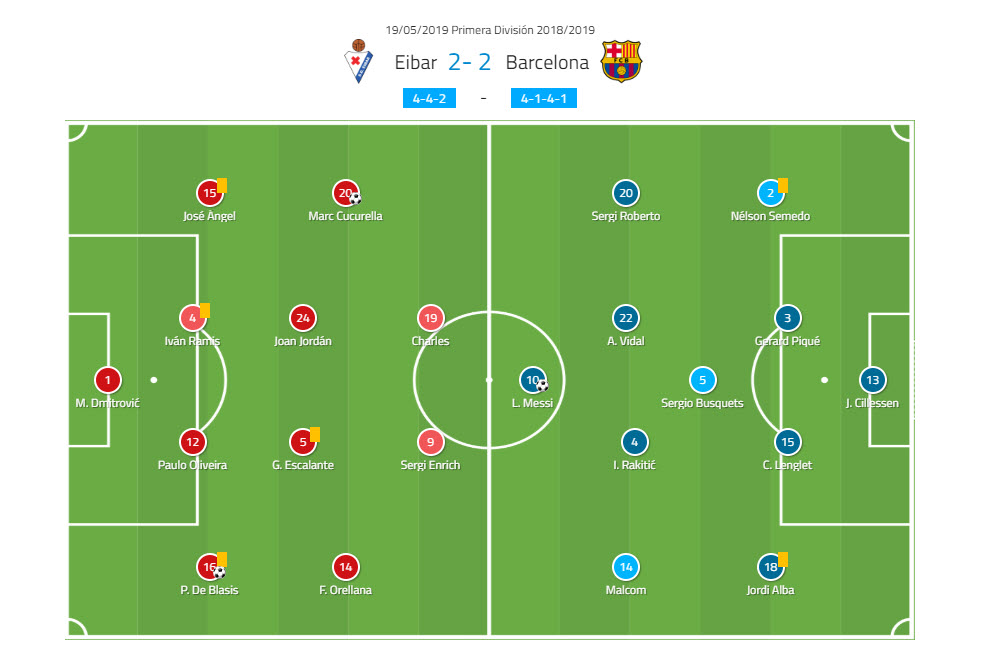 Even though we may have expected or wanted Ernesto Valverde to use these final games to give some youth players a chance to shine, the Ant once again played it pretty safe in his personnel choice. As a result, Barcelona’s gala XI was exactly that – as gala as the injuries allowed.

Jasper Cillessen was in-between the sticks, deputising for the injured Marc-André ter Stegen and getting some game time before the Copa del Rey final. Arthur Melo, Ousmane Dembélé, Luis Suárez and Philippe Coutinho were the other names that were sidelined because of injuries which meant that the likes of Malcom and Nelson Semedo would come into the picture.

Surprisingly, both Semedo and Sergi Roberto got to play, the former in the right-back position and the latter just ahead of him on the right flank as a wide midfielder. The rest of the squad was as predicted with the usual suspects and Lionel Messi leading the march.

The Catalan team operated in an interesting 4-1-4-1 system with no real changes throughout the 90 minutes.

Eibar were also one of those lucky teams that practically finished their season before the final kick of the ball in La Liga. Neither a win nor defeat would have changed much for the hosts as they claimed the middle of the table and the 12th position with a draw on the afternoon. Still, with all that in mind, Mendilibar made a total of two changes from the 0:1 defeat against Villarreal exactly a week ago.

Pedro Leon and Sergio Alvarez were the players who dropped to the bench and in came Gonzalo Escalante and the experienced Brazilian forward Charles. The rest of the squad was unchanged and ready to finish the season strong in front of their fans at the Ipurua.

José Mendilibar decided to field his team in a 4-4-2 system that was unchanged throughout the game.

The hosts reveal their cards early

Even though both teams had virtually nothing to play for in this last game of the La Liga season, one team was up for a brawl while the other had Lionel Messi. And yes, this may sound like a review of multiple Barcelona games throughout the campaign but whether it’s the overall bad morale around the Catalan camp or their minds were somewhere else but they definitely weren’t at the Ipurua.

Eibar, on the other hand, started and finished the game following their own philosophy that they’ve set from themselves this season. The hosts were aggressive in their approach, contesting the ball and pushing Barcelona back whenever they deemed it possible.

Right from the start, Eibar pressed high with numbers but more importantly, strategically positioning their players to slowly but surely suffocate Barcelona and force them to either go long or commit to a costly mistake.

Notice in the image above how Eibar first push their lines higher, entering Barcelona’s half with numbers and making sure to mirror their setup by putting a marker for every Catalan player who offers a possible passing option out of the press.

By applying pressure at the right areas, Eibar slowly dictate where the ball goes and force Barcelona to first go back to the backline and then wide to hug the touchline. And that’s where Eibar essentially pull the trigger, shift their troops onto that specific side and create overloads and superiorities to yield a mistake out of Barcelona.

The example below showcases how all 10 of Eibar’s outfield players have entered the opposition’s pitch in an attempt to sustain the press with an extremely high defensive line, pinning Barcelona down in their own first third.

Contrary to their usual strengths, Barcelona struggled with high combating the high press throughout the season, failing to counter the likes of Real Betis, Levante or more recently, Liverpool. Still, with their tactics of dropping one or two midfielders deeper to assist the build-up, they did have the mechanisms to bypass the press if it wasn’t efficient enough.

Luckily for Eibar, they were ready for both scenarios and in case their press failed and Barcelona managed to cross the middle of the park and started entering the danger zones, the home team would revert to a narrow 4-4-2 system, prioritising bodies in midfield in a low-to-middle block.

The goal was to minimise the passing channels for Barcelona to exploit and to shut down all and any options to send the ball through the lines and into the final third, as can be seen in the example below.

Here, Eibar successfully force Barcelona all the way back to their defensive line and to Piqué as there is no way the block can be breach from the current setup.

Barcelona were still somewhat dominant on the ball but it certainly was showing neither in the result nor the chances on the pitch. The Catalans had Messi as the only out-and-out forward in an interesting 4-1-4-1 formation and the Argentine was playing the role of a striker who would make runs in behind the defence.

That was the exact reason why most of their attacks heavily relied on through balls and line-breaking passes. With Eibar’s efficiency of making those rather difficult to execute for Barcelona, flashes of brilliance were once again needed to alter the scoreline.

But the hosts were actually the ones to draw first blood and it was in a rather characteristic approach and through a well-designed setup. Most of their deadliest attacks originated on the flanks, as was the case with the goal that opened the scoring.

But the most interesting thing here was the build-up towards their default attacking setup. When in possession, Eibar opted to push their full-backs forward, leaving only two centre-backs as the last line of defence.

The full-backs would then often overlap with the wide midfielders, who would, in turn, cut inside and exploit the free areas through their respective half-spaces. This would sometimes shift the formation into a 2-4-4 during the attacking phases.

This did two specific things for Eibar in those situations: firstly, it enabled the team to maintain the needed width to their attack through the full-backs while the wide midfielders cut inside and charged behind the defence. And secondly, it forced Barcelona’s defenders to track the midfielder’s run back into the box, thus freeing full-back to send balls into the danger area and towards their prime targets.

This worked wonders with the first goal. Granted, Eibar were a bit lucky Gerard Piqué slipped in the crucial moment, allowing the forward to win the first ball and lay it off to Marc Cucurella who scored the opener.

Nonetheless, the attack followed that specific pattern and it resulted in a great goal for the home team: the full-backs pushed forward, maintaining width while the midfielders cut inside and sprinted into the box, dragging the markers away and setting up a great crossing situation.

Barcelona were lucky to have Lionel Messi once again who netted two goals in the span of two minutes to turn the tides in the Catalans’ favour. As mentioned, through balls were key to their progress down the pitch.

Once the necessary spaces in Eibar’s setup were found, the execution soon followed and Messi was merciless for the 35th and 36th time this season in La Liga. Interestingly enough, he was the Barcelona player to both open and close the scoring for this season, which is something that only happened once before this campaign in 2014/15.

As per usual, Barcelona relied on their midfield maintaining their dominance in order to control the game. This was, however, much more difficult to execute than imagined since Eibar set up their play exceptionally well to counter this.

Their overloads in the middle areas were used to slow down the ball circulation but Barcelona‘s trident used their triangle formation and position altering to their advantage. The key aspect was to free at least one part of the triangle so he can release the ball forward.

Naturally, Barcelona’s greatest outlet was Jordi Alba making quick runs in behind the defensive line. As a result, the Catalans would often look for chances to send the Spaniard sprinting into open space.

In the example below, Eibar try to overcrowd Barcelona’s midfield but even though they were mostly always superior in numbers, Barca found ways around it with seemingly simple movements. Busquets peels away from the trio, distancing himself from the other two midfielders and since Eibar were adamant to close the passing channels to the midfield, the flanks were not monitored properly and that gives Busquets a clear target out wide.

Practically the same thing happens in a different scenario that ends the same: Barcelona combine in the midfield with quick ball circulation to outplay the overcrowdment and collapse attempts by Eibar and exploit the narrow system with a quick release of Jordi Alba on the flank.

In this case, Ivan Rakitić sends the sprinting Alba straight into the final third with acres of free space for him to exploit.

Barcelona finished their La Liga season with a bitter-sweet taste in their mouth as yet another trophy is secured for their cabinets but it is, unfortunately, not enough to disperse the grim clouds floating above the team.

Winning Copa del Rey against Valencia later on this week will be the team’s priority and should, at least in theory, help brighten the gloomy mood, as should Lionel Messi’s already secured Pichichi and a potential European Golden Boot award.

From the looks of things, we’re in for a turbulent summer that could see Barcelona embark on yet another rebuild project, which could even start from the very top with the coach himself and work its way down to the squad.

Only time will tell.