High-flying Getafe managed to secure a 1-0 win over Valencia in the first-leg of their Copa del Rey quarter final. In our analysis we will look at the set-ups of both two sides, and how Getafe were able to join Sevilla and Real Madrid by taking a first-leg advantage into the return legs.

Both sides operated in 4-4-2 systems but applied them in slightly different fashions. Valencia’s 4-4-2 functioned as more of a 2-4-4 when they had possession of the ball as their wingers remained high and wide and the full-backs moved up the field into the midfield line. Dani Parejo and Daniel Wass held down the middle of the pitch for Valencia and were tasked with dictating the tempo of the play. Parejo in particular played direct passes into the channels for Gameiro and Santi Mina to chase after.

Gameiro and Mina were both given license to make runs in behind but also drop off into space to pick up the ball. When one of the two did drop in, Valencia’s wingers were asked to make runs into the space that was vacated by the centre-forwards.

As mentioned earlier Getafe also set-up in a 4-4-2. Unlike Valencia though, Getafe were slightly more reserved in their approach. This was perhaps understandable, given the undoubted quality that Valencia still possess despite a hot and cold first half of La Liga. Antunes was selected on the left wing for Getafe. This selection bore the attacking threat of Valencia’s right-hand side in mind, as Antunes is more known for playing left-back.

Getafe’s full-backs were much less cavalier than Valencia’s. They were more focused on holding their positions and crossing from deep rather than overlapping their winger and crossing from the byline. Getafe played in a much more direct style when they had the ball, as reflected in both the possession and passing accuracy statistics. As a result, both of Getafe’s forwards played very close to each other as they looked to work from knock-downs from each other. 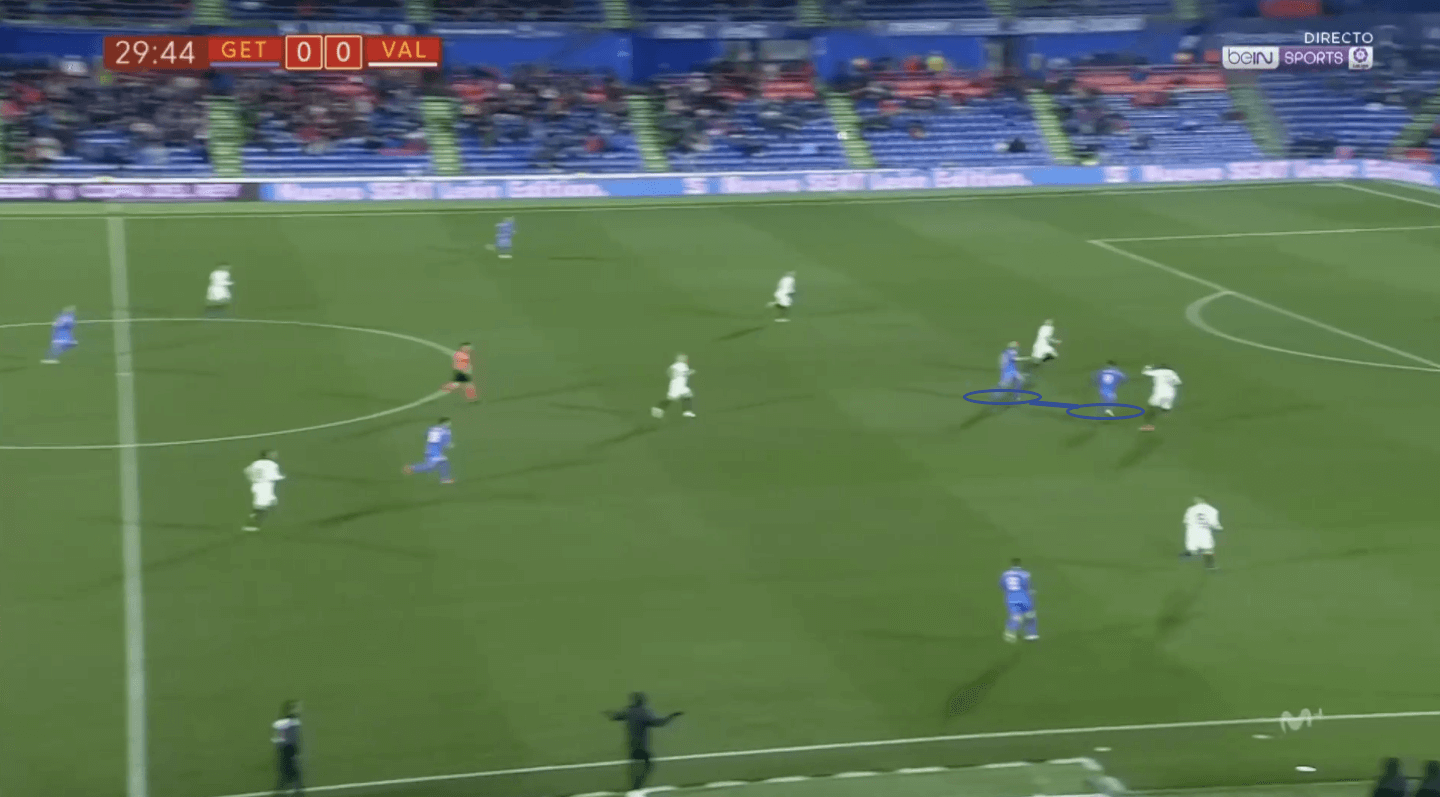 Whereas both of Valencia’s wingers stayed high and wide, at times Getafe’s wingers were asked to drift into central areas. What this achieved for Getafe was they were able to gain a numerical advantage in the centre of the pitch to create 3v2 situations. This also allowed Getafe to get more numbers into the box and ultimately generate many more shots in good positions than Valencia were able to. 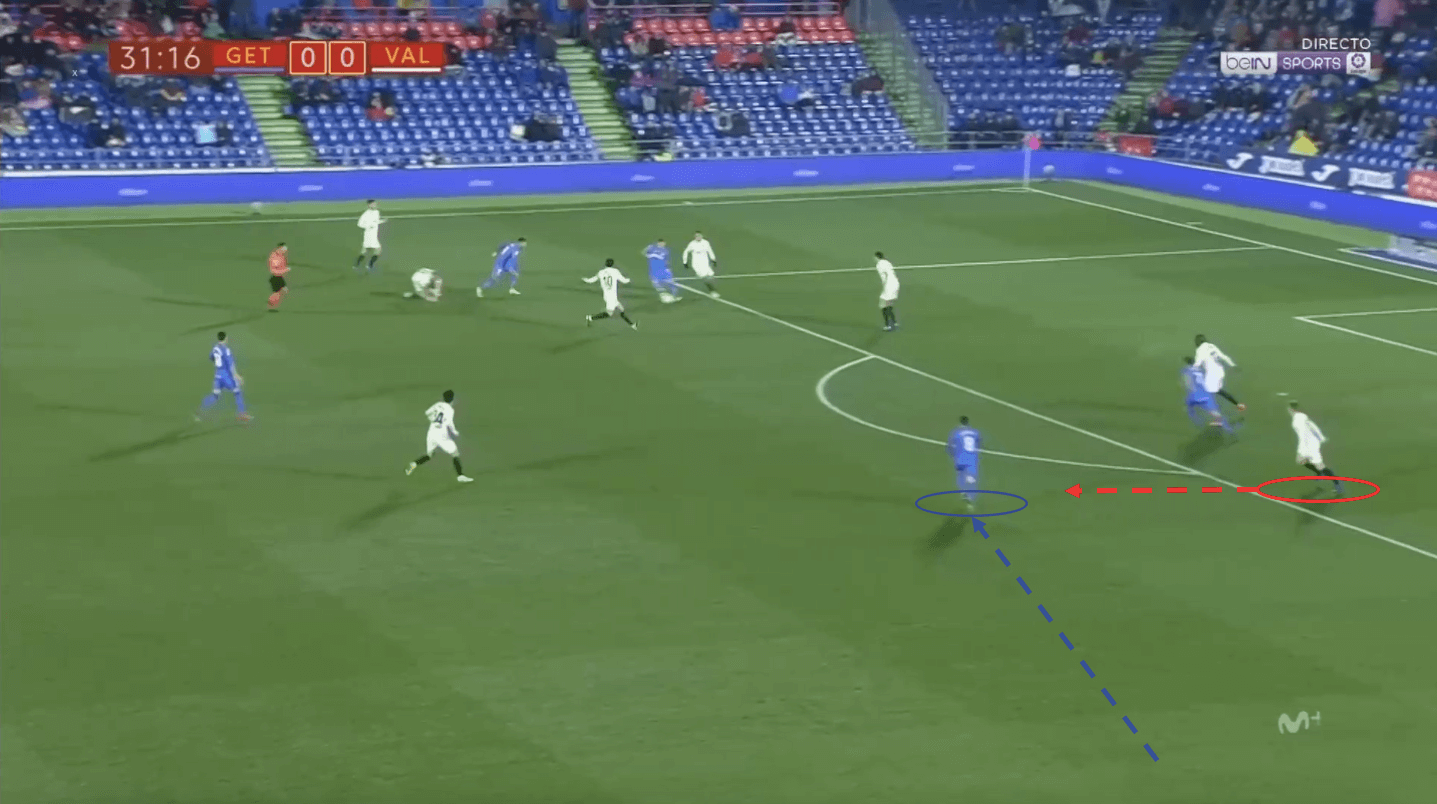 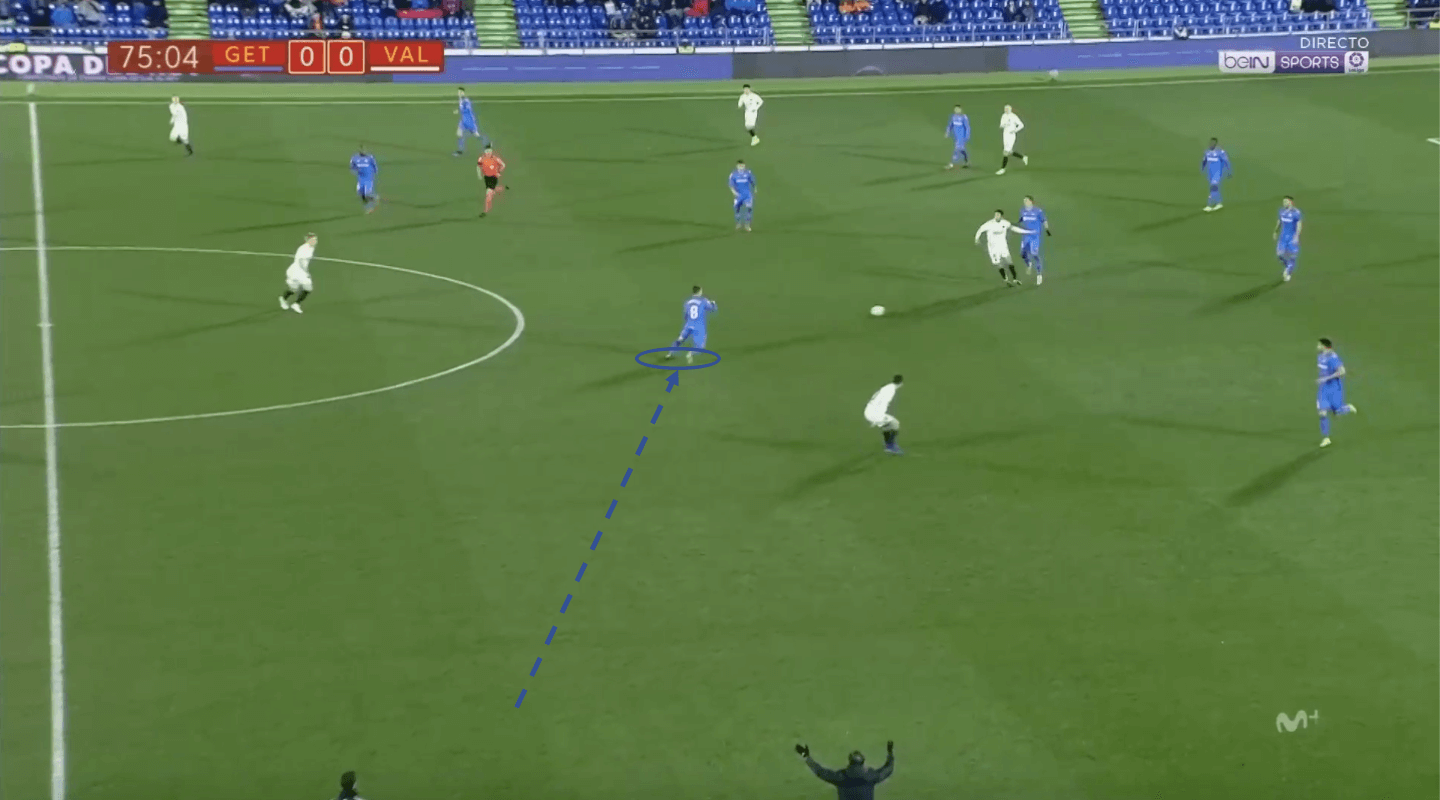 Getafe limited Valencia to just five shots, with only one on target. This was a result of dropping into a deep block when Valencia progressed the ball into Getafe’s final third.

The main advantage of operating in a 4-4-2 is the extra attacking options that both sides could get into the opposition penalty area. With two strikers and often the opposite winger moving into the box, an attacking side can have at least three players attacking the ball. 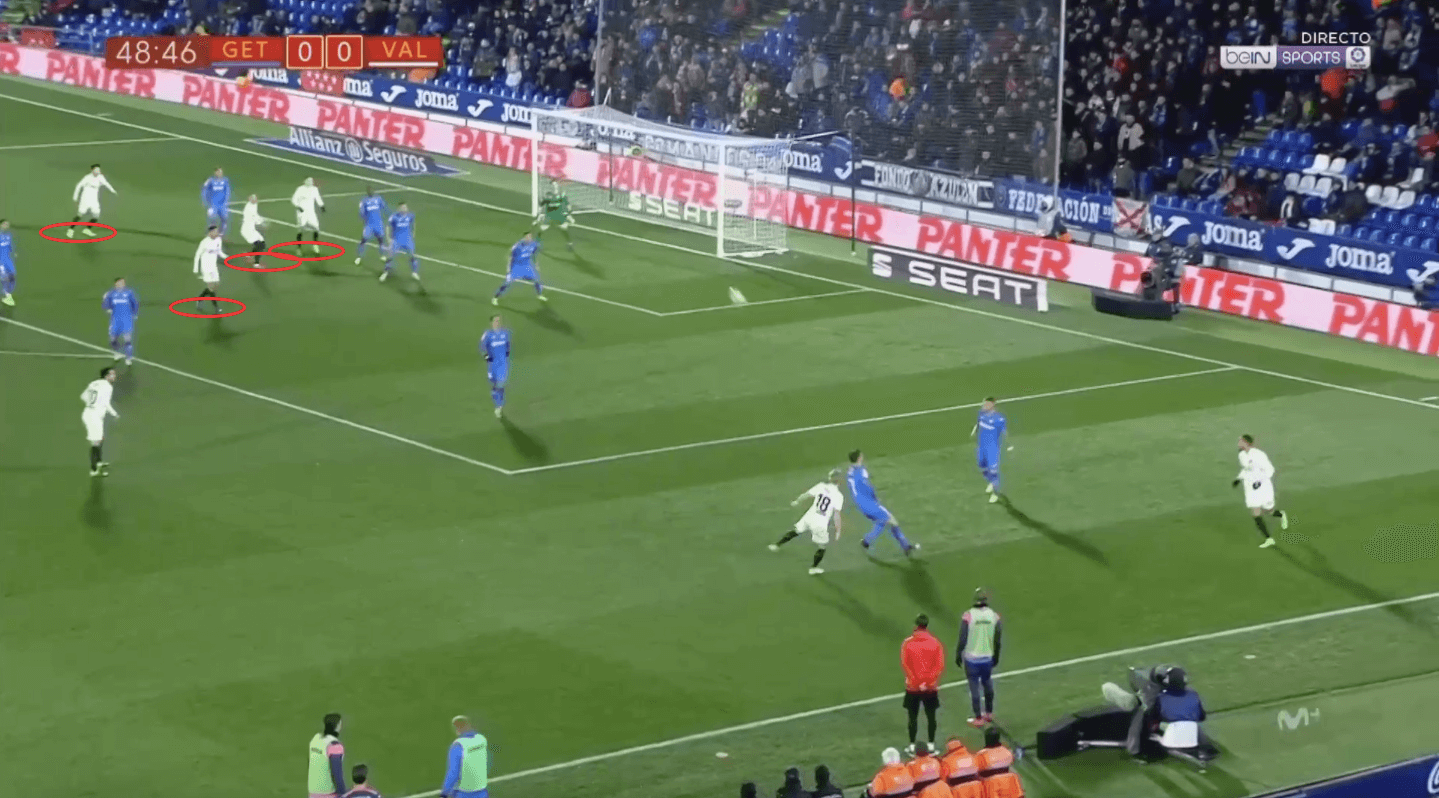 Due to both sides setting-up in 4-4-2 systems there was a lot of one-on-one defending for the side without the ball to do. The game would be decided by who was able to get the better of these defensive duels. Djene was particularly effective in this area making 21 recoveries, his third most in a game this season.

The game came down to very fine margins which is reflected in the 1-0 scoreline. Midway through the second half Getafe sent on their talisman so far this year Jorge Molina, and he proved to be the difference.

The goal was a perfect example of how Getafe tried to play all game. They win the ball from Valencia and look quickly for a direct pass into the channels for one of the forwards to chase. Mata latches onto the ball, holding it up and waiting for support. 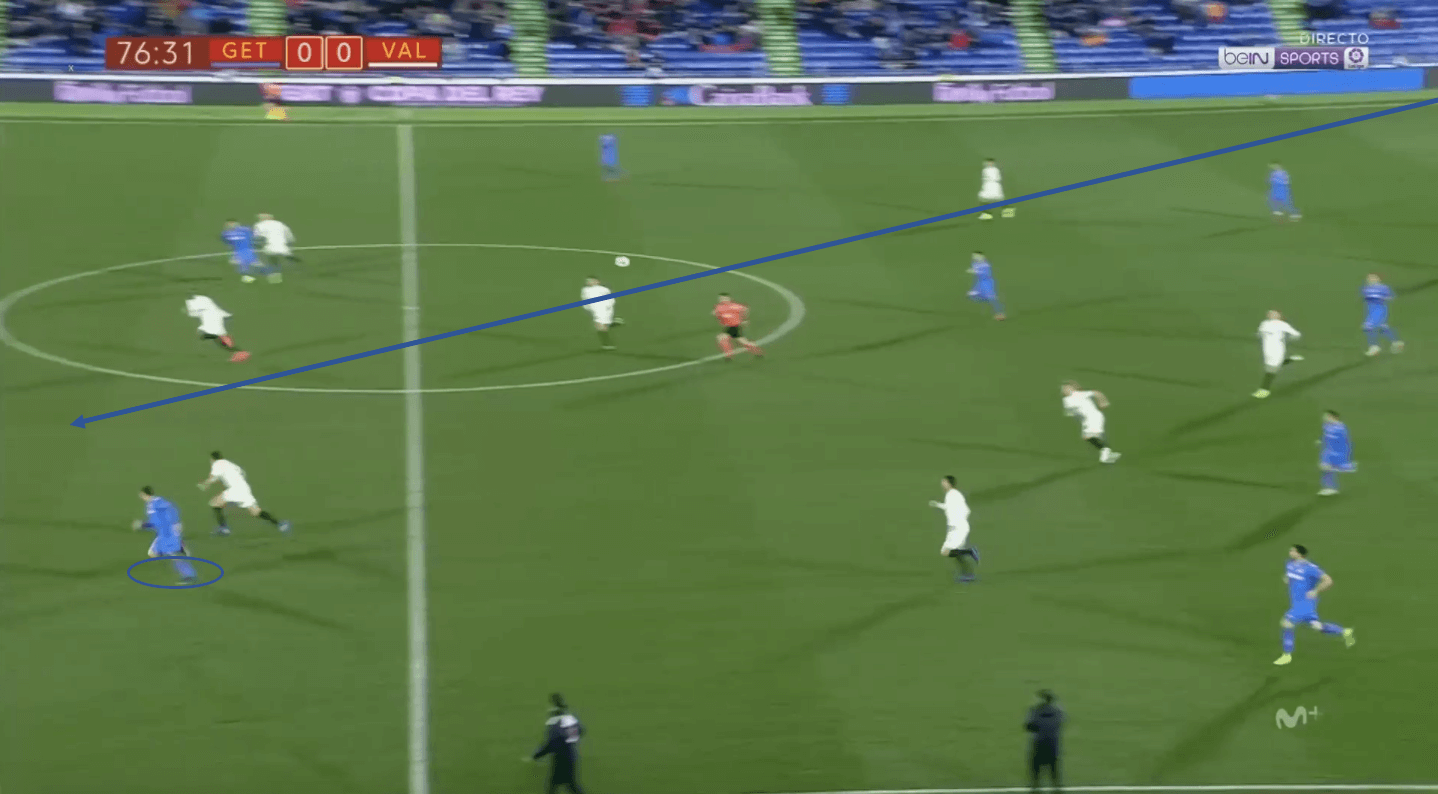 Having been switched over to the left wing, Portillo had drifted inside and was attracting the attention of Valencia’s defenders. Outside of Portillo, Getafe’s left full-back had pushed up in support and the ball came to his feet following a blocked cross. 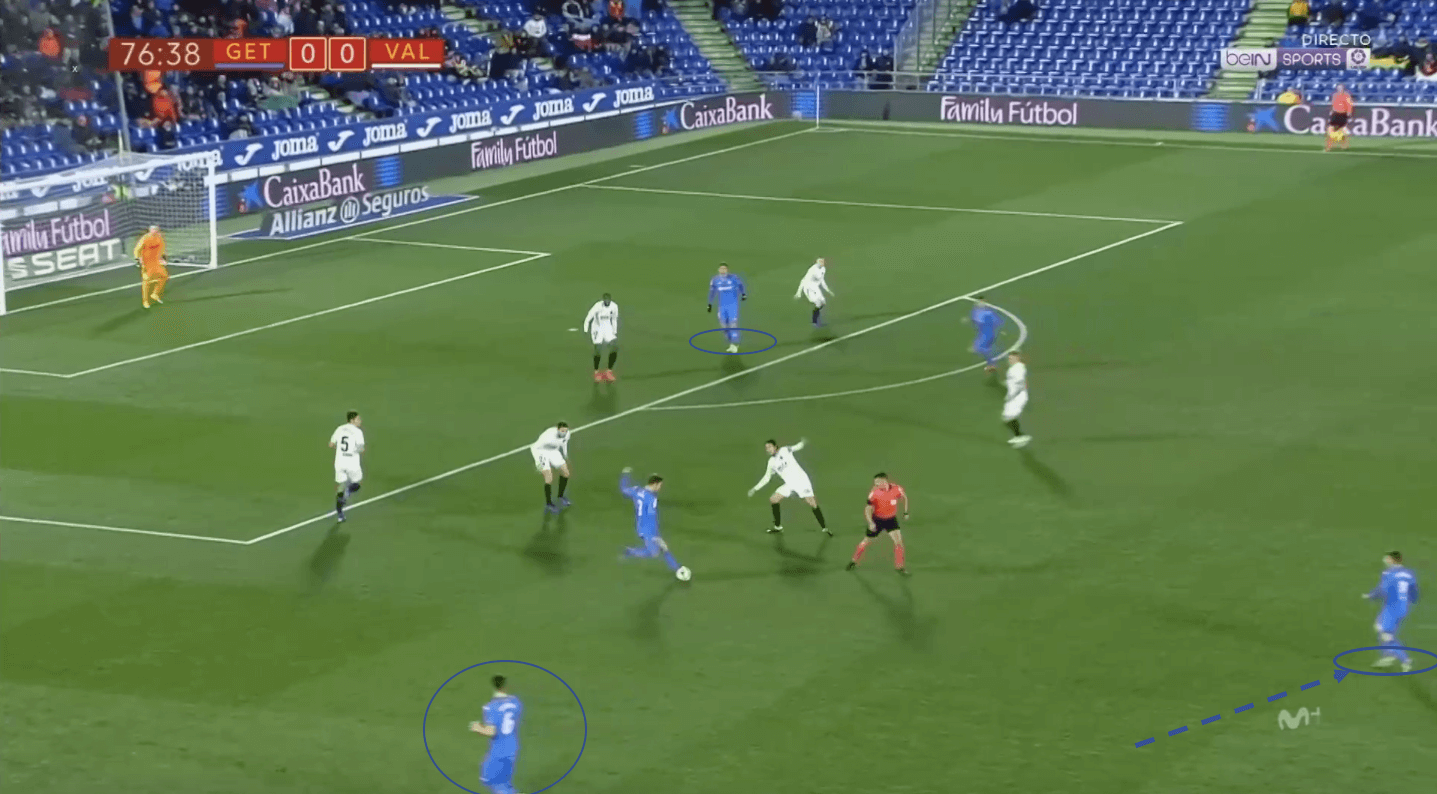 On the far side Getafe’s right midfielder had made his way into the box giving Toni Lato, Valencia’s left-back, a decision to make: stick with Molina on the penalty spot, or move to mark Foulquier. Getafe’s left-back crossed from the corner of the box and Molina was left free on the edge of the six-yard box. He was able to take the ball down and finish easily. 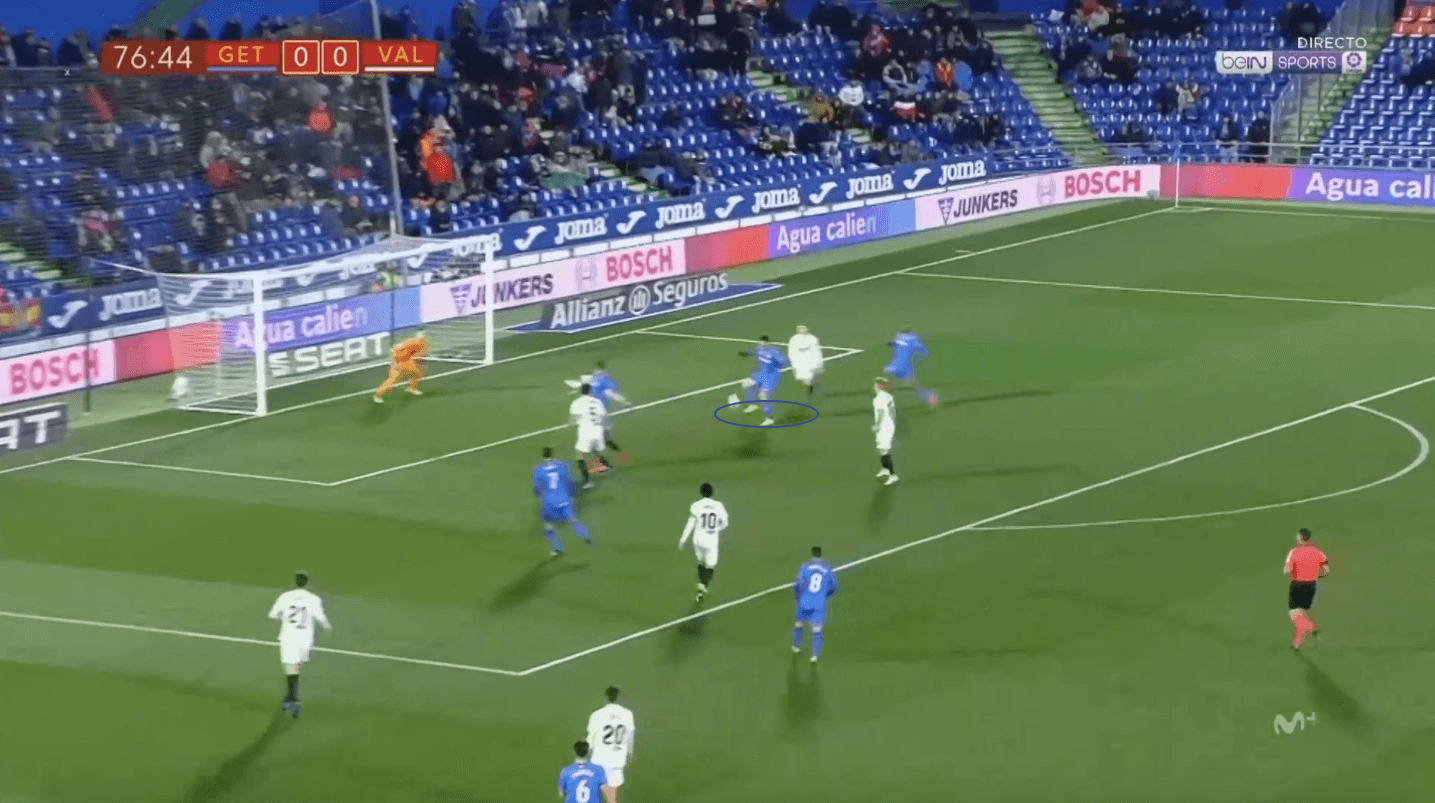 Following the goal, Getafe dropped back into their low block and looked to hold on to the 1-0 victory. This made it even harder for Valencia to break them down and generate good shooting opportunities.

The game was nervy, with neither team seemingly wanting to give too much away given the fact that it was the first-leg of a quarter final. Getafe have been very impressive so far this season and impressed yet again in this game. The way this game went, without a dramatic improvement in Valencia’s performance in the return leg it seems as though this tie is going one way, especially in light of Getafe’s 1-0 aggregate lead.