Denmark played against Tunisia during the third day of the FIFA World Cup 2022 at the beautiful Education City Stadium in Al Rayyan, Qatar and the match ended with a 0-0 draw which seemed like a win for the Tunisians, since any point against a powerful team like Denmark will be very useful later in the race for a second spot.

This draw gave hope and confidence to the Tunisian players as it showed that they are capable of qualifying for the knockout phase if they keep playing with the same discipline and determination in their next two games against Australia and France, even though the mission is still complicated.

In fact, both teams are in Group D which also includes France and Australia and that explains how tricky the group can be. All teams in the group are capable of creating surprises, either positive or disappointing ones, and Tunisia created a half-positive one with this draw since it was not expected at all.

On the other side, it is safe to say that Denmark lost two important points and were not at their best during this match as they also risked losing it. The team struggled to reach Tunisia’s goal, especially during the first half and were not able to score during the second half despite being more dangerous up front. Denmark’s attacks were most of the time predictable and slow and Tunisia’s defensive organisation made their mission even more complicated.

Moreover, finishing issues from both sides prevented the two teams from scoring, knowing that both of them had disallowed goals and created some dangerous goalscoring opportunities, which means that chance creation was not really the problem. This result will oblige Denmark to start the next match with extreme determination to win against France to not reduce their qualification chances and keep themselves in the run before meeting Australia. Denmark proved that they are able to beat a team like France as they won against the same team twice earlier this year.

In this tactical analysis, we will explore why both teams failed to score and how Tunisia’s defensive tactics helped them limit Denmark’s attacking danger. But first, the analysis will start with the introduction of both line-ups.

On the other side, Tunisia opted for the 3-4-3 formation with Aymen Dahmen as a goalkeeper, Dylan Bronn, Yassine Meriah and Montassar Talbi in defence, Ellyes Skhiri and Aïssa Laïdouni as central midfielders, Ali Abdi and Mohamed Dräger as wing-backs, Youssef Msakni and Anis Ben Slimane on both wings while Issam Jebali was the team’s striker. 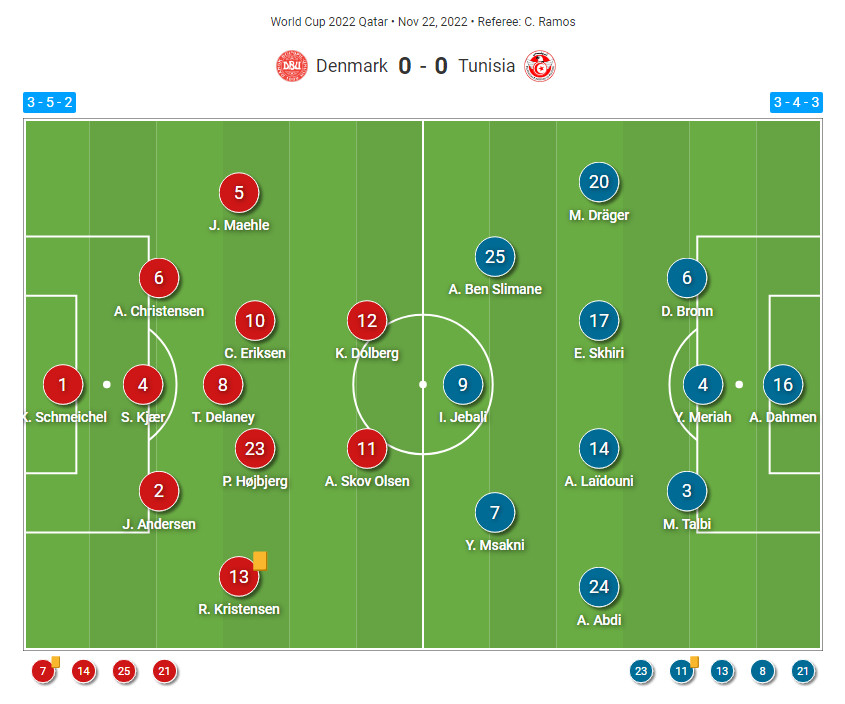 Both teams struggled to score in this match despite creating numerous goalscoring opportunities and being dangerous at key moments. Denmark shot nine times with five attempts on target while Tunisia shot 11 times with only one attempt on goal. This confirms the fact that both teams created chances and reached the box, yet, the finishing was not as good as needed especially from Tunisia since most of their shots went off target. For instance, this first real dangerous attempt from Dräger was a very suitable goalscoring chance for Tunisia as it could have changed the rhythm of the match if it went in. But unfortunately for them, the shot went out by a few centimetres. 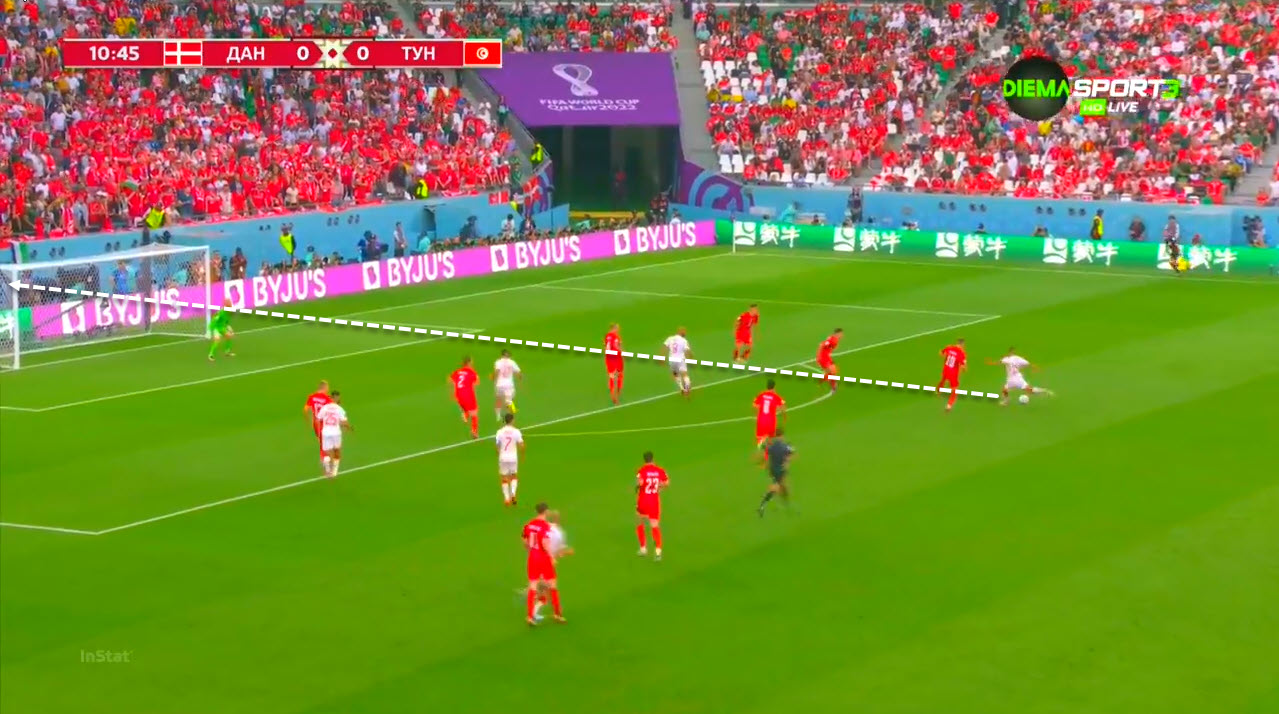 It is true that Denmark had more possession during the match with 58.06% against 41.94% but this possession was often a passive one from Denmark, especially during the first half. Tunisia had more dangerous opportunities during this half and could have opened the score if the attacking players were more effective in front of goal.

Tunisia relied on quick counterattacking and on long passes at the back of the Danish defence in order to surprise them and exploit Jebali, Msakni and Ben Slimane’s technique and agility inside the final third. This plan worked well for Tunisia but on some of these occasions the finish was not excellent, and at other times, Jebali was trapped in the offside position, just like what happened in the following example when Dräger crossed the ball at the back of the Danish defensive line to meet Jebali who was slightly offside. 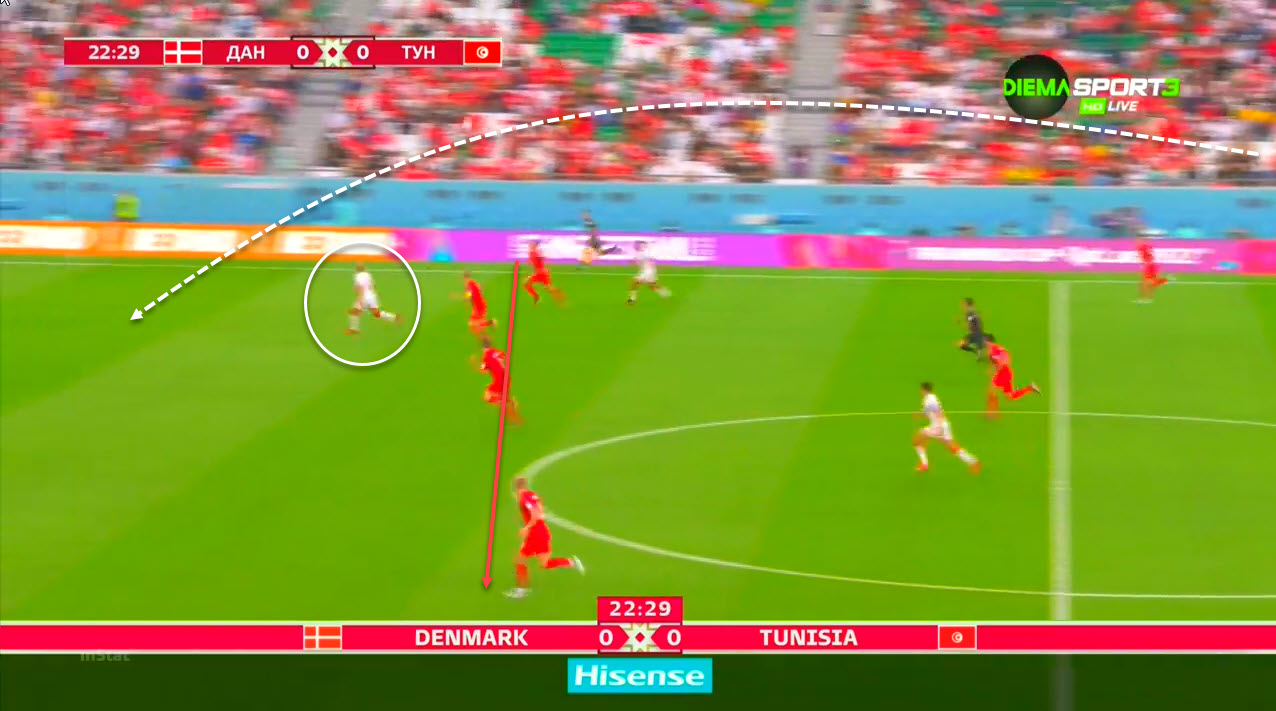 Denmark made some similar attempts to break Tunisia’s defence and opt for long passes from the defence using Kjær’s excellent long pass abilities. However, Tunisia’s defence was quick enough to react to these attempts and the back three were always helped by Abdi and Dräger in the non-possession phase and especially during these quick Danish attempts. In the following example, Kjær crossed the ball successfully to Skov Olsen but the latter was tightly marked by Abdi who was able to intercept the ball as soon as Skov Olsen controlled it. 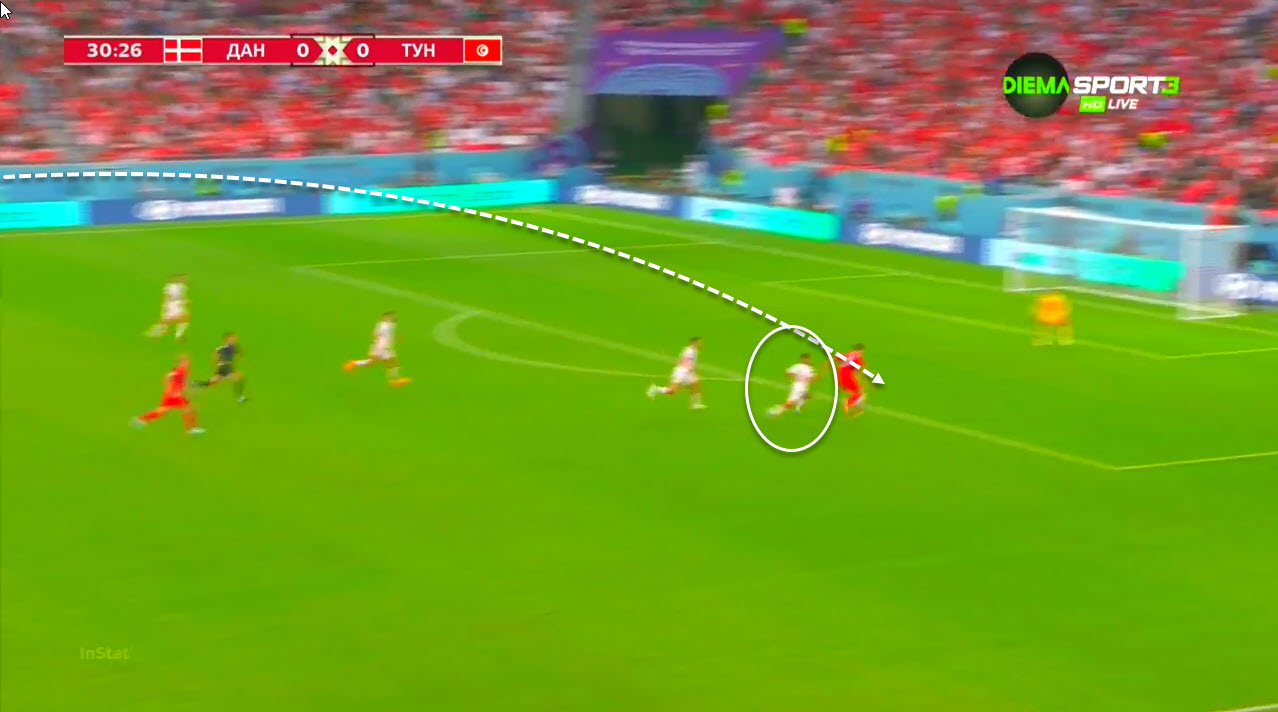 A few moments later, Tunisia were very close to scoring once again when Laïdouni collected the ball from a deflected corner and shot the ball with a first-time touch. It was a very powerful shot directed towards the upper corner however it lacked precision. Exploiting such situations in a more efficient way and improving the finish on such occasions would help Tunisia in becoming a much stronger team especially if succeed in doing this during this same tournament. 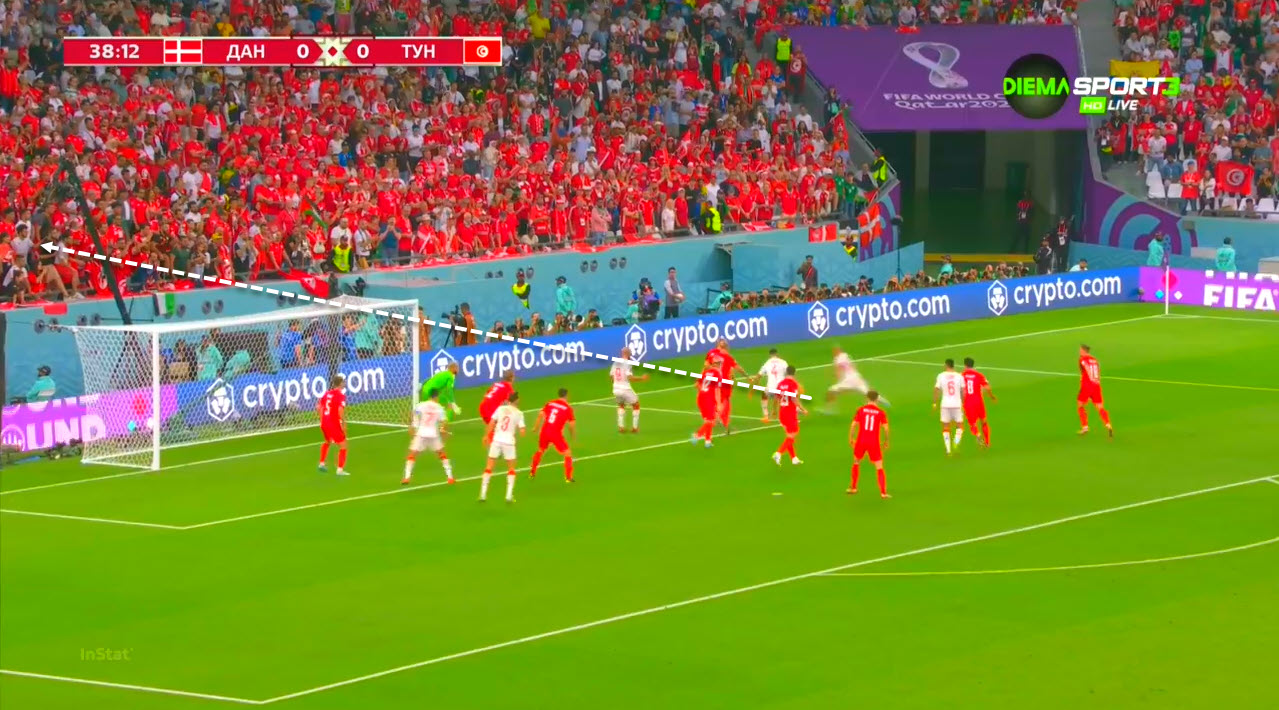 Denmark’s defence lacked anticipation on certain opportunities and they struggled to mark players like Jebali and Msakni tightly despite the latter not being at his best during this match. Therefore, it should be said that Denmark must improve their defensive movements and mark players better in the upcoming games, otherwise, they will be in trouble because teams like France surely have got better finishers than Tunisia.

Failing to stop a chance like the following one is worrying from Denmark’s defence. Msakni was able to advance between two opponents and find a way to provide a through pass to Jebali who met the ball at the back of the defence and found himself in a one vs one situation with the goalkeeper. Such penetrations shouldn’t be allowed from a defence like Denmark’s knowing that this could have easily been scored. 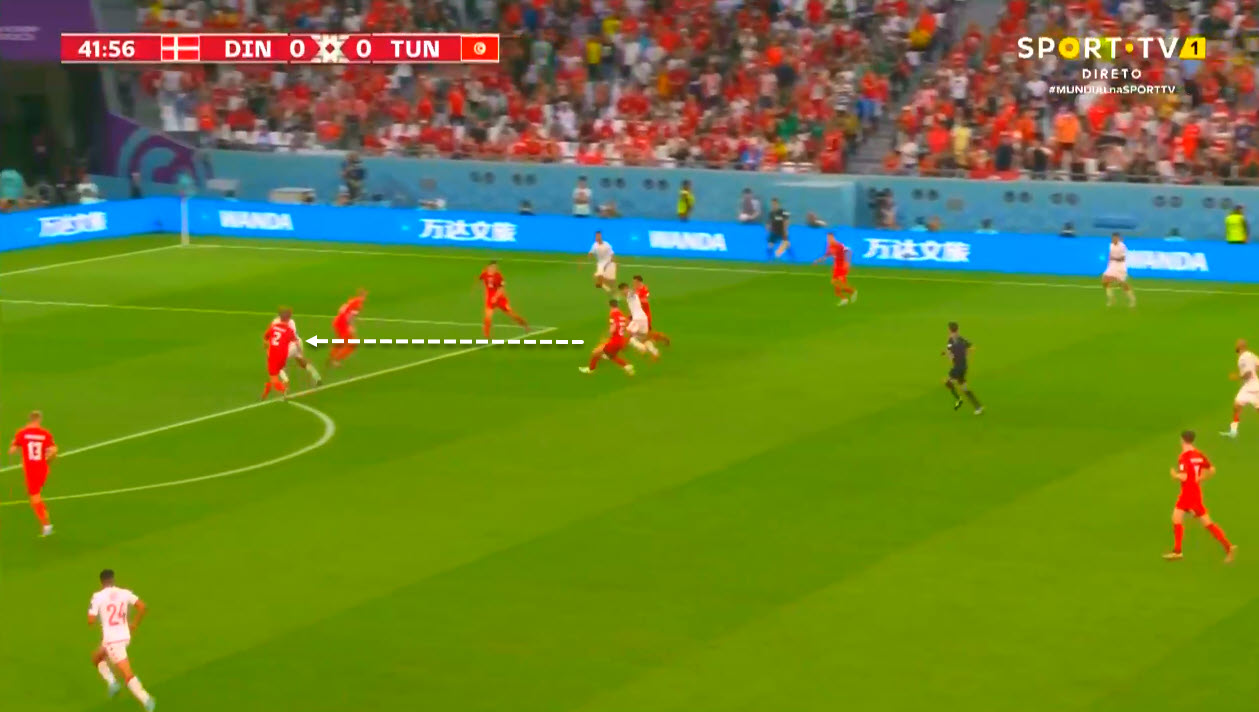 Jebali lacked concentration when he found himself with the ball in front of goal and was relatively surprised by the goalkeeper who did very well to get out of his goal trying to close the angles and disturb Jebali’s shooting choice. As soon as he saw the goalkeeper coming out, Jebali opted for the lob and although his idea was not a bad one, the execution lacked precision as the ball didn’t get as high as needed to get past Schmeichel. The latter did great to save the shot too and the credit goes totally to him for saving his team from conceding a goal at a bad time. 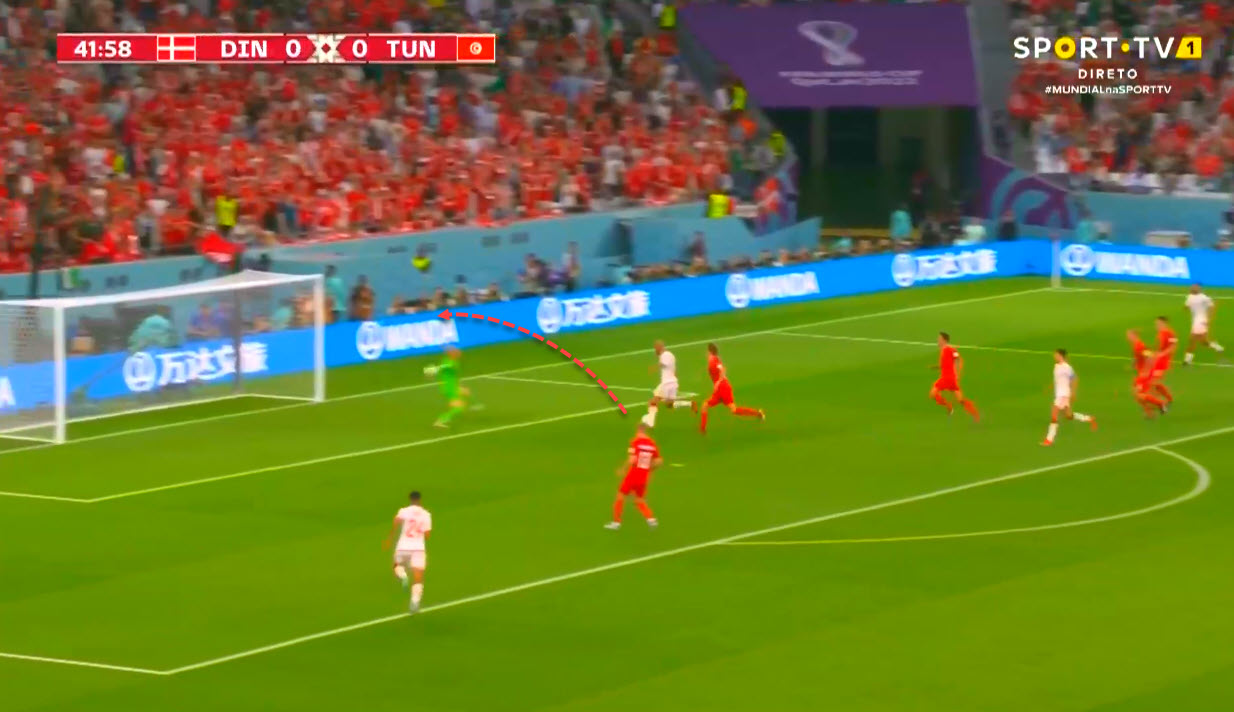 Denmark started the second half with more determination to score and looked more dangerous as Tunisia didn’t start this second half in the best of ways. Denmark tried to exploit the fatigue of a few Tunisian players and keep circulating the ball until finding a way to threaten their goal, especially when knowing that Tunisia didn’t make early substitutions. Denmark’s attacks however lacked confidence and ideas and the players resorted to shots from distance and early crosses towards the box.

At the same time, Tunisia kept adopting the same plan which consisted of compact defending with 10 players and quick counterattacks that rely on either penetration from Msakni or long passes to Jebali at the back of the defence. What helped Tunisia remain balanced and avoid conceding too many opportunities was their solid defensive midfield. In other words, Skhiri and especially Laïdouni ensured that the ball doesn’t reach the box so often and were aggressive in their interceptions and clearances throughout the match, which disturbed Denmark’s attacks and limited their efficiency.

Moreover, Laïdouni contributed so often to the attacking phase and you can see below how he initiated counterattacks and was very close to concretising them. Here, he advanced with the ball from midfield and tried to serve his teammate who was coming from the back but failed to do so due to a slight drop of concentration and his direct opponent’s interception of the pass. 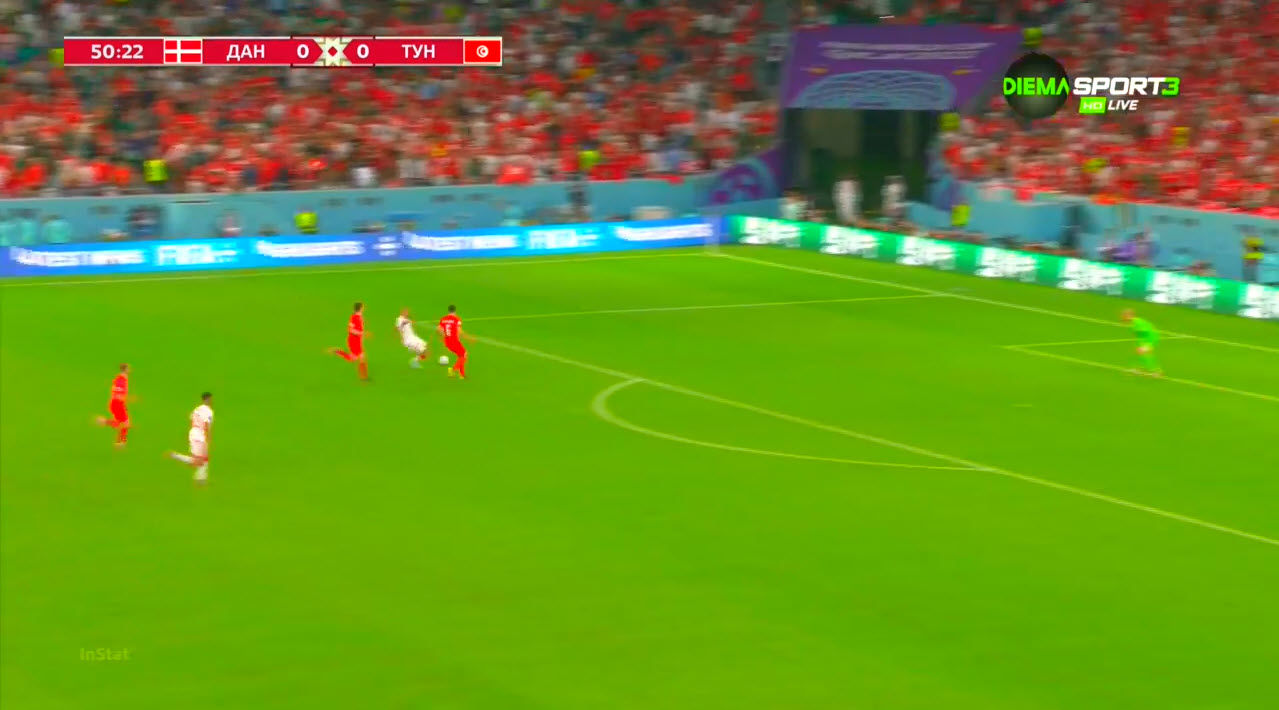 Denmark’s reliance on crosses from the wings was not very effective as Tunisia often had the advantage on the ball thanks to their superiority in aerial duels, knowing that the three Tunisian centre-backs are tall compared to Dolberg and Olsen. Therefore, Denmark could have alternated their attacks in order to confuse Tunisia’s defence. But unfortunately for them, they only started attacking according to different plans during the last minutes of the match. 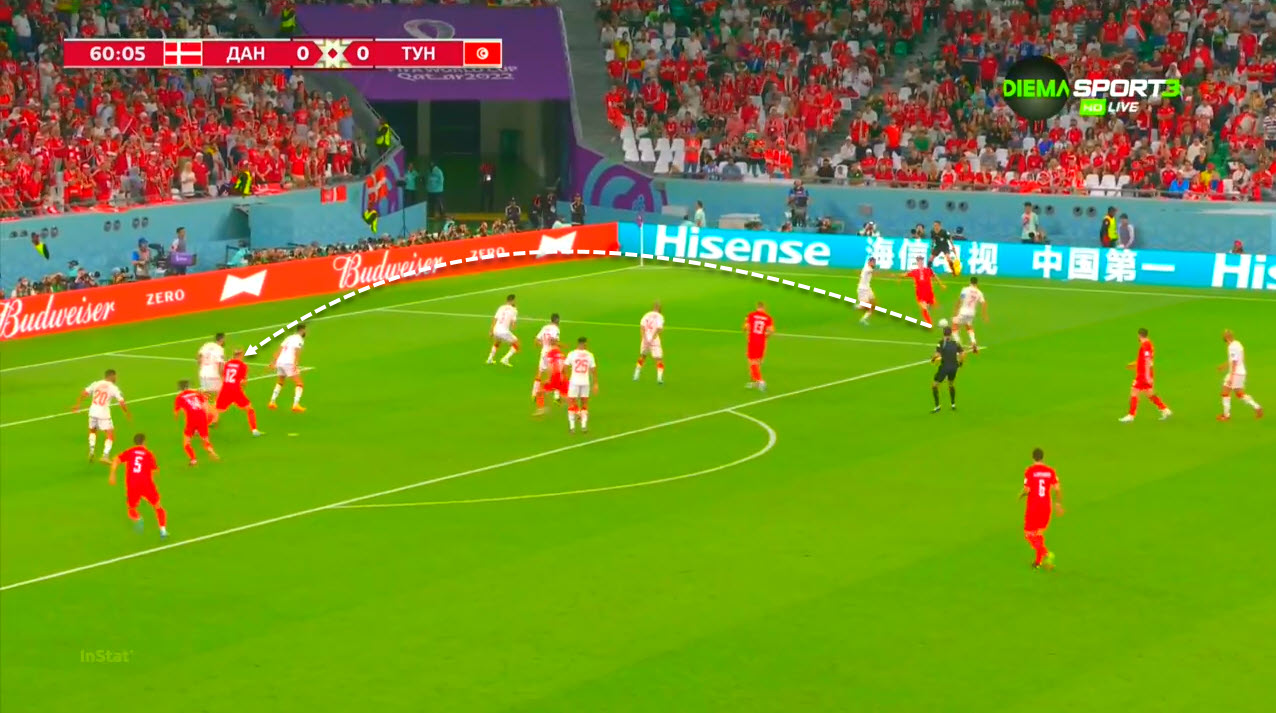 In fact, they were able to create a lot of danger to Tunisia’s goal during the last 20 minutes as they alternated between shots from distance, crosses and penetration attempts. The following chance was saved miraculously by Dahmen as it was a well-angled powerful shot that was going to the upper right corner if not for Dahmen’s save. 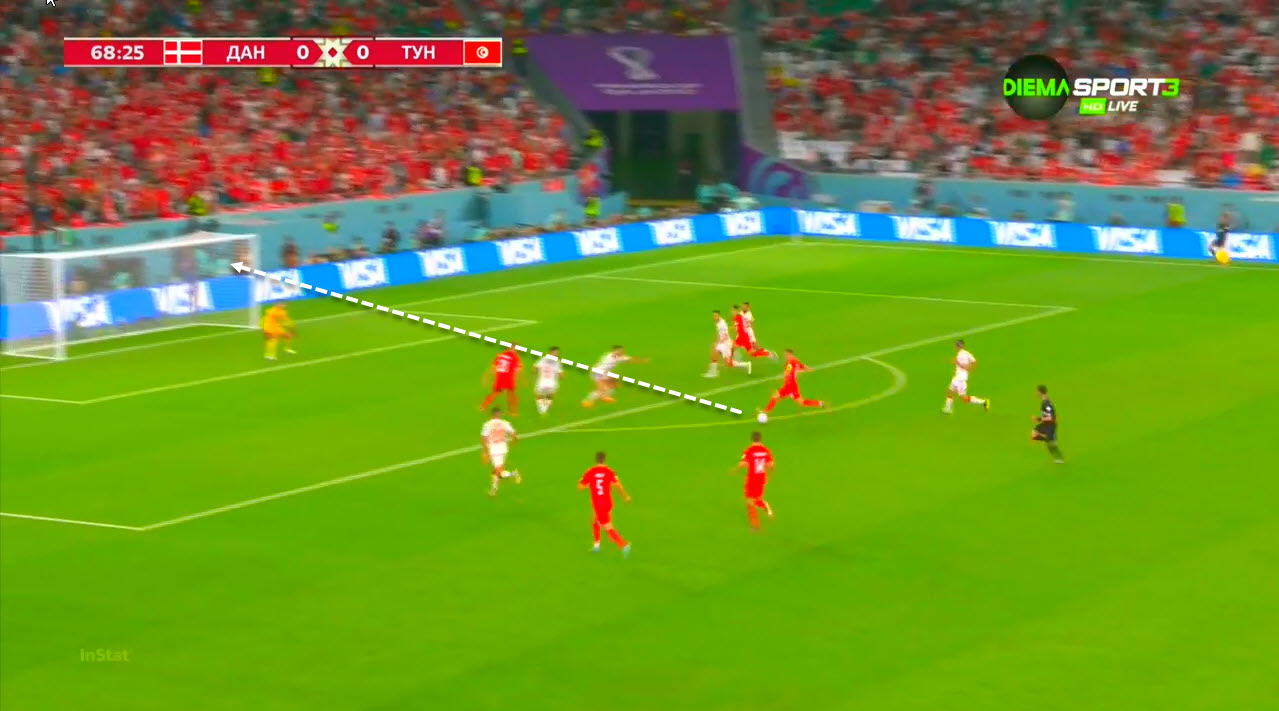 Denmark lacked skilful and quick dribblers in this match especially on the wings in order to create threat from these sides or aim at cutting inside. Nevertheless, they made up for that with accurate crosses. One of Eriksen’s corners could have been scored as well as it was hit twice by two Denmark players in order to hit the post and not go inside the net. It was an unlucky chance for Denmark who could have avoided a draw thanks to this late opportunity. 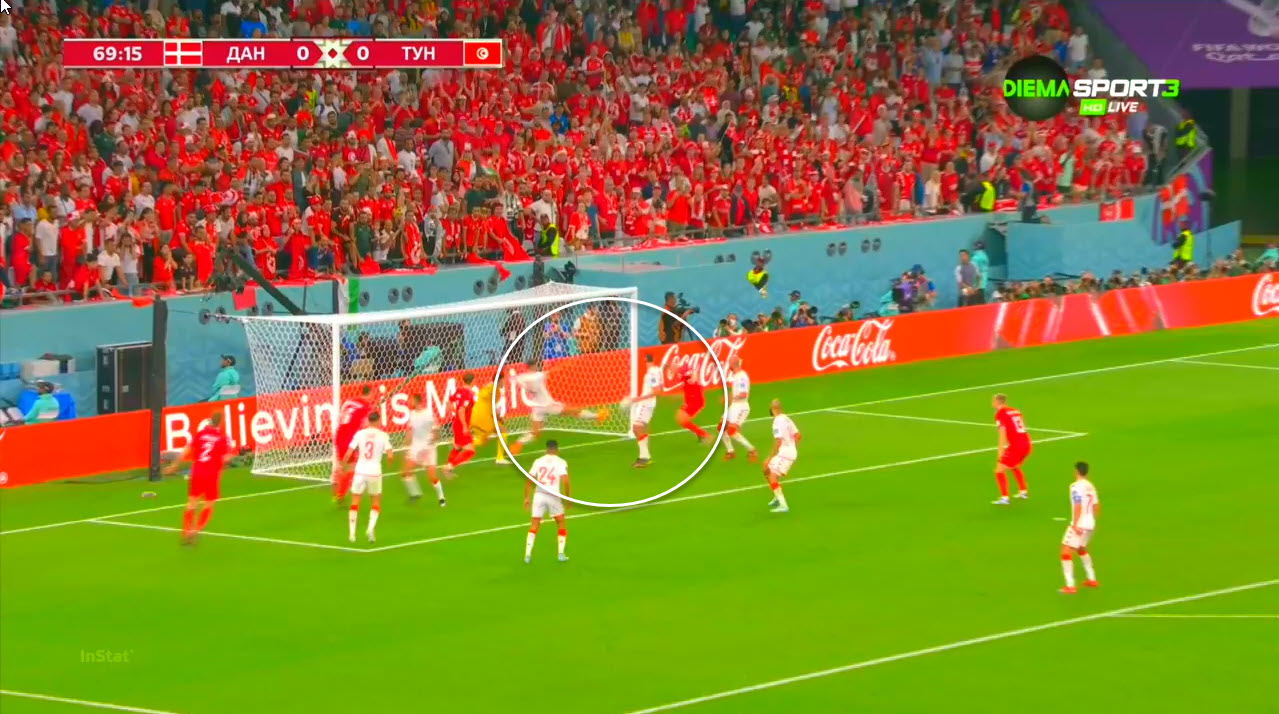 Following France’s 4-1 win against Australia, things are now still blurry for both Denmark and Tunisia. The next fixture will surely help in deciding who will qualify from this group, although it could also oblige viewers to wait for the third fixture in order to identify the holders of the two top spots. Until then, both Denmark and Tunisia will have to improve their performances in order to gain three points respectively against France and Australia.