The knockout stages of the 2022 World Cup are well underway now, with Brazil setting the bar pretty high as they send a message out to the remaining teams via a 4-1 win over a courageous South Korea team. A first-half onslaught from Tite’s men provided an unassailable lead come the half-time whistle, and despite South Korea’s fight and consolation goal, it is Brazil who book their place in the quarter-finals to face Croatia.

This tactical analysis will break down the attacking components of Brazil’s tactics, along with an analysis of how they handled South Korea’s approach on the ball.

Brazil have put on some eye-catching displays at this year’s competition so far (apart from that 1-0 defeat to Cameroon) and have dazzled many with their intricate attacking build-up play and individual flair.

Tottenham Hotspur man Richarlison has been in fine form for his nation and was joined in attack by PSG‘s Neymar, Raphinha, and Vinícius Júnior. Lucas Paquetá played a deep-lying midfield role next to Casemiro after featuring higher up the field in previous fixtures. Danilo came in at left-back as Alex Telles dropped to the bench, while Liverpool keeper Alisson played an important part between the sticks. 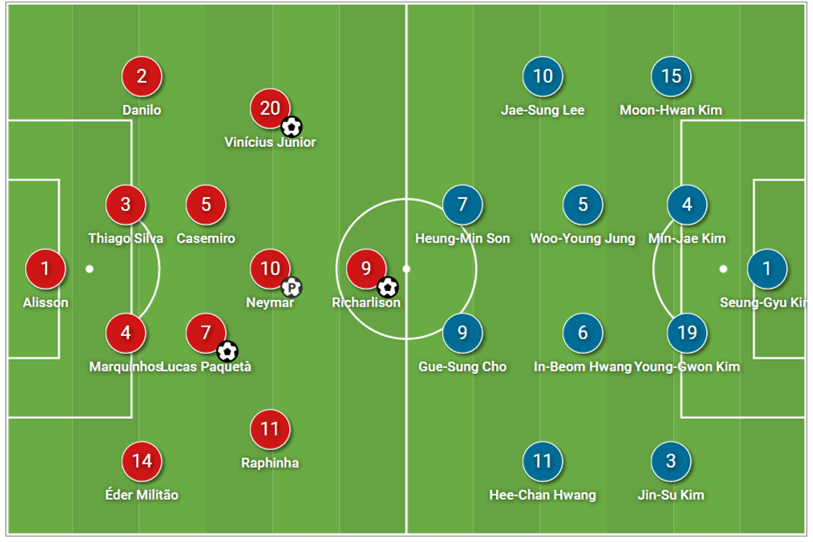 South Korea captures the hearts of football fans around the world (apart from Portugal) with their 2-1 win over the Portuguese in the final group stage game to confirm their qualification to the knockout phase. During the group stage, the Korean Republic had played with a 4-3-3 and a 4-2-3-1, but they opted for a switch to the classic 4-4-2 with the intention of nullifying Brazil’s attacking threat.

Star man Heung-Min Son lined up in attack next to Cho Geu-Sung, with wide support coming from Premier League man Hwang Hee-Chan and Bundesliga winger Jae-Sung Lee. A familiar and consistent back four featured, with Seung-Gyu Kim in goal.

Despite the heavy scoreline, this did not entirely reflect the Korean Republic’s performance as they actually had some strong spells during the game and kept Alisson a busy man. While their attacks were limited in the first half, they showed more of themselves in the second 45. Read on for an analysis of how Brazil handled South Korea in both halves.

South Korea showed little desire to sit back and absorb all of the pressure, even in the early phases, but their approach showed respect to Brazil and seemed to acknowledge their role as the superior team. Brazil were prepared for a fight though, and took the threat seriously, while shows composure and quality to get out of tricky situations.

This example above shows an early failed South Korean attack, with Brazil playing out danger rather nicely. Upon receiving the ball from Raphina, Paquetá showed good awareness and calmness to shield the ball and let it run across him, bringing him and the possession into a central area. From there, Brazil had plenty of time and space once they moved the ball to the opposite flank due to South Korea’s presence being heavier on the initial flank thanks to their attack.

Brazil were forced to be organised in their own half on more than one occasion, knowing the danger that South Korea had going forward. Richarlison put a good shift in off the ball, closing down the opposition in situations like the one you see above. In terms of shape, the defensive unit’s depth would vary throughout the game from scenario to scenario, but they would always be compact, and when possible, in close proximity to the midfield unit. This limited the amount of space and opportunity for their opponent to progress the ball from the midfield third into the final third.

Taking a closer look at South Korea’s shape in attack, they looked to utilise the wide elements of a 4-4-2, aiming to stretch the Brazil backline to create space in central areas. Credit where it is due, though, Brazil held firm on this, especially in the first half.

The Korean Republic would try to hug both flanks in attack, with both strikers and often one of the central midfielders joining the attack from a central position. The remaining central midfielder would look to act as the anchor, while the full-backs rarely ventured forward.

In the second half, we saw more attacking intent and quality from South Korea, despite the 4-0 scoreline. This could be down to a number of factors: Brazil slowing their game down to reserve energy levels as they were satisfied with the score and/or South Korea making a few positional and tactical tweaks in attacking situations to get themselves into the midfield third being the main two reasons. Regardless, South Korea put in an attacking performance that they can be somewhat proud of, as they showed guts and quality – their efforts going forward did not look desperate, but showed identity and tactical familiarity.

In the image above, we can see that Brazil had been somewhat sucked into their own game – they like to draw opponents in when attacking to create space elsewhere on the pitch, and this is what South Korea did in this attack. Despite being surrounded by Brazil midfielders, the South Korean midfielder was able to take the ball well and progress the move.

After travelling vertically into the centre, the ball was then shipped out to the left flank as South Korea again looked to use Brazil’s narrow defensive tactics against them. They found some success in reaching this area thanks to small tweaks being made in their approach play from midfield into attack – shorter passes in tighter central areas to open up the opportunity to play wide allowed this. This attack in particular probably merited a goal – the cross was of good quality and Alisson was forced into action along with some last-ditch defending from his teammates.

South Korea registered eight shots on goal (six on target), and totalled 530 passes in a game where they saw 46% possession – while all of these stats were lower than that of Brazil, there was little indication that Brazil had it easy for 90 minutes.

Despite going goalless against Cameroon in the final group stage fixture (where they had their “reserves” playing), Brazil have looked frightening in attack in every other game. Tactically, the squad have really bought into Tite’s tactics, and in turn, he has put great faith in the individuality of this team. What do we mean by this? Well, in the modern game, many teams are heavily reliant on a set of tactics that hold certain instructions for each player/position, which can sometimes limit what a player can do on an individual basis as they must play in line with the coach’s instructions.

Not in this Brazil squad, though. It is reminiscent of the great Brazil teams of the past – yes they have a clear attacking philosophy but individual ability and flair is an important element of it, which links in nicely with their fluid attacking.

This first example showcases some of that individuality we were talking about, just four minutes in. Brazil simply aren’t a team who want to play possession-based football for 90 minutes with short pass after short pass, and Casemiro showed that. Taking the ball from his own half, he burst forward into South Korea’s half, before playing a pass out wide. Brazil, like South Korea, looked to utilise the wide areas – they just approached it differently. Casemiro could have taken the orthodox and patient route by passing the ball to Danilo at left back before he started his bursting run. The dribble was unexpected and executed at a good pace with control, which is why it was difficult to stop.

In Brazil’s previous games in this tournament, we have highlighted that a key factor in their attacking tactics is combination play. They have displayed an elite level of team cohesion and understanding in these attacks, not just using the classic one-two combo, but putting plays together that involved three or sometimes four players. The movement, awareness, and vision to pull this off so often require great confidence and quality, which is what makes this team so awesome to watch.

This move started with Raphina using some individual sparkle to get draw an opponent out before taking the ball past him and then laying the ball to Casemiro. Paquetá was the next recipient of the ball, but Raphinha was already on the move before Casemiro played his pass.

Raphinha showed composure and strength to take the ball close to the byline and knew there was a strong Brazil presence in the box, opting to make a low cross into the box. This is where we saw another interesting element of Brazil’s tactics. Vinícius Júnior could have raced into the box at the beginning to join his teammates, but he held off ever slightly, allowing him to arrive late and go unmarked to pick the ball up and place it home to open the scoring.

Brazil showed similar quality in a combination that led to their third goal on the day – the fact that they have scored multiple goals with these fast combinations shows that individual quality we spoke about, but that is also a mainstay of Tite’s tactics. 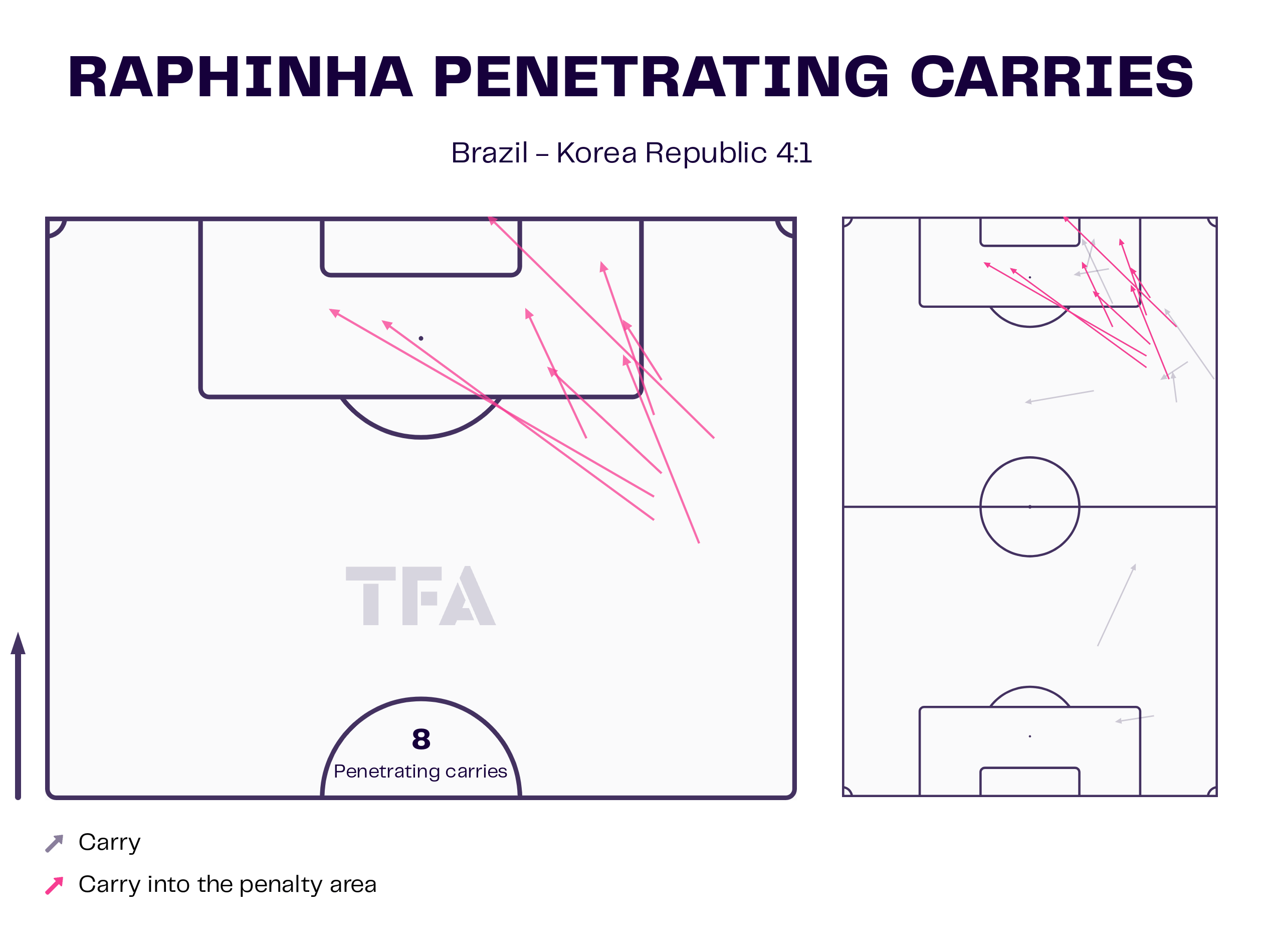 Raphinha is one of many Brazil players who have raised their stock so far in this competition, but let’s take a closer look at his impact on the ball against South Korea, specifically his carries. He made eight penetrating carries, with all of them having the shape of starting wide and heading inside from the right flank. His technique on the ball combined with his pace is a nightmare for defenders.

It has been said before, and it’ll be said again. Expect to see Brazil go far in this competition. While they may be one of the favourites to win the thing, they are also arguably the most fun to watch. They have shown a remarkable balance of discipline (both defensively and tactically) and attacking flair and unpredictability.

They have the ability to turn a simple possession phase into a goalscoring opportunity in the blink of an eye. South Korea surprised many by getting this far, and as we stated earlier, perhaps the scoreline was a little harsh, or perhaps they were just unfortunate to face such a deadly team.

Nonetheless, this South Korean team has undeniable quality, and they will take some positives from their 2022 World Cup campaign. 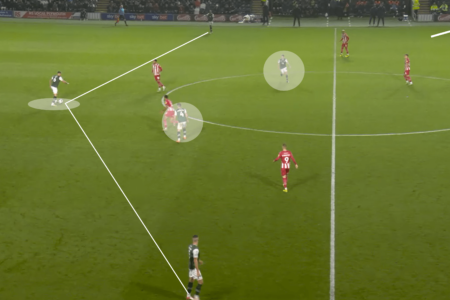