Serie A has long held a reputation as a league that values age and experience over youth. This is a reputation that has been built on year after year of evidence as teams invested in and trusted players who were into their 30’s to perform as key first-team players. You can easily make the argument, however, that this reputation is ill-deserved (along with the reputation that Serie A has as a league that is ‘boring’ or that favours defensive football) and in recent seasons the likes of Atalanta and Sassuolo have actively moved to buck the trend of experience over youth.

As ever with these things though, I believe that the truth lies somewhere in the middle of all of these somewhat generalised statements. For every team that favours defensive football with a solid back five, there will be a team who wants to play attacking football with final third penetration and half-space orientation. For every game that is ‘boring’, there will be a game that has you on the edge of your seat from start to finish.

The same is true when it comes to the ages of important players throughout the league. For every player who would be considered experienced or even post-peak, there will be a younger player who is impressing in one of the most tactically difficult leagues on the planet. There are numerous instances on this site of tactical analysis pieces that break down the intricacies of the tactical styles of teams in Serie A or of scout reports that cover the interesting players in this league. In this piece though, we will do something different.

Using data analysis techniques we will look to identify three players who we would consider to be somewhat ‘under the radar’ in Serie A at the moment although we should probably confess at this point that we may be stretching the definition of this term somewhat with one of these players.

Often, when we use data in the recruitment or talent identification process we come up against the issue of players at teams who are towards the top of the table performing well in terms of data. This is something that is particularly problematic in leagues where one or two clubs are dominant. In order to combat these issues and find a solution to using data effectively in all markets, we can use fairly simple techniques to find players who are performing well for their clubs regardless of league position. We can use a model that tells us how active players are in key metrics as a percentage of total team output. This means that, if a team is towards the bottom of the table with 15 goals scored, then a player who has scored 8 of those goals will still feature prominently in our data because they have contributed to a higher percentage of their team’s overall goals. Makes sense, right?

In this data analysis, we will use this technique to identify U23 players who are contributing well to their teams across three key statistics, ball progression, goals and expected goals. 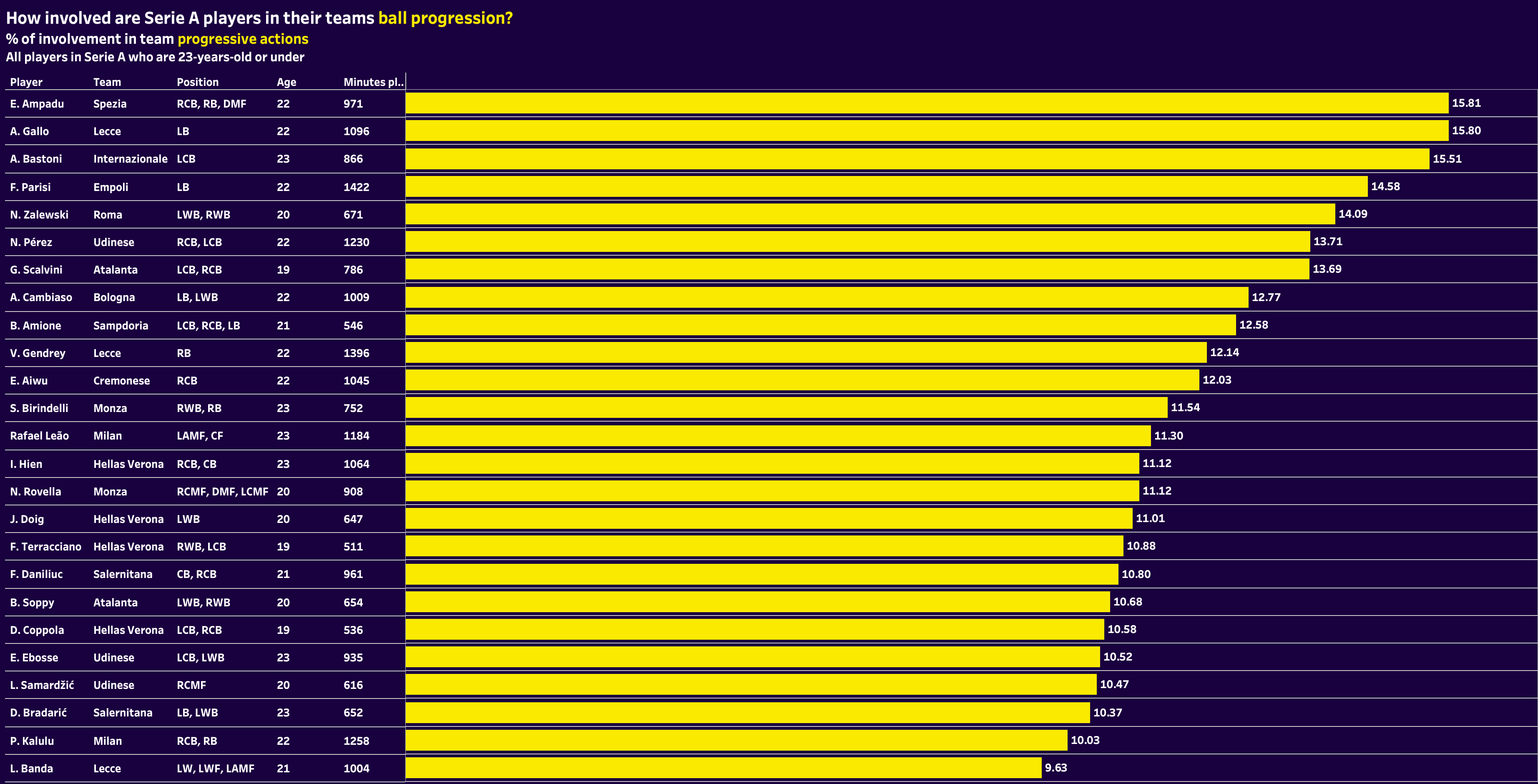 You can see from the graphic above that there are some interesting names featuring prominently. The Welsh international Ethan Ampadu is having a good loan spell at Spezia from his parent club Chelsea and despite only playing 971 minutes so far this season he has been responsible for 15.81% of his team’s total ball progression.

Our pick for a more in-depth look in this article, however, will be the 22-year-old Argentinean central defender Nehuen Perez of Udinese. Perez made the move to Udine permanent at the start of this season having previously been on the books of Atletico Madrid. While Perez is, as we might expect, a good defender, it is his passing and ball progression that has stood out in the data for us here. At the time of writing, he has played 1,230 minutes in Serie A and he has contributed 13.71% of Udinese’s total ball progression. 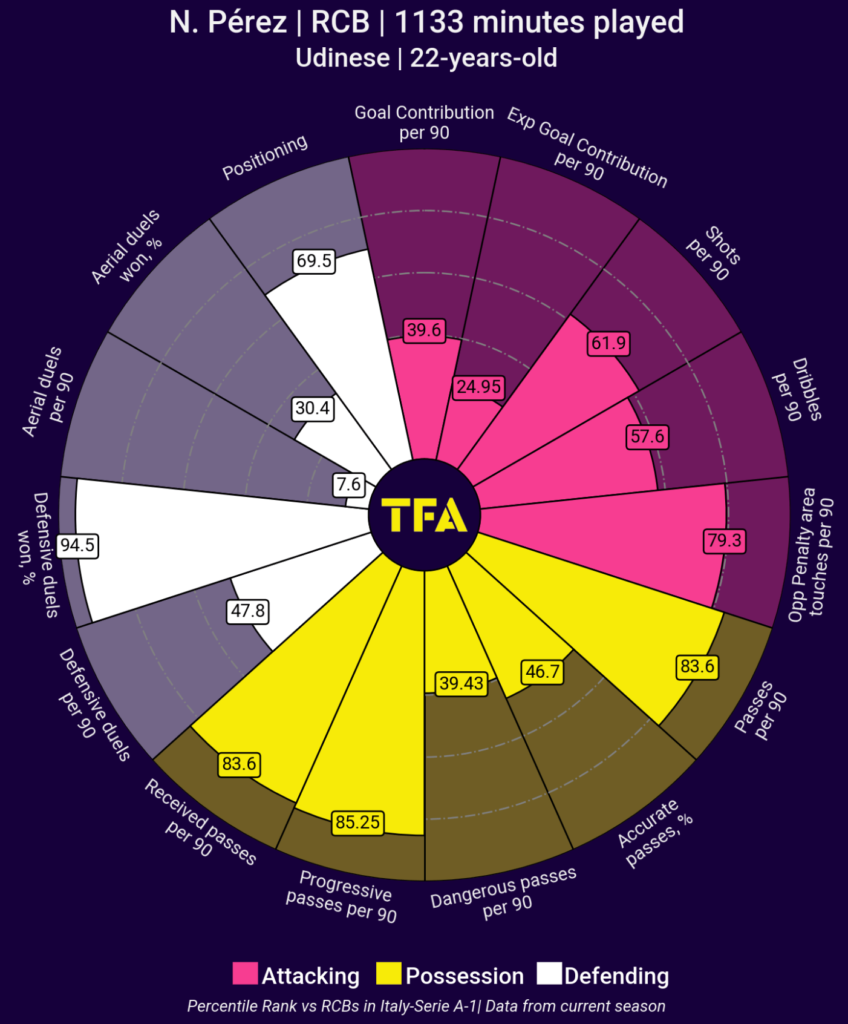 Now that we have identified Nehuen Perez as a player of interest, we can use pizza charts to give us a more clear picture of the player’s data from a more balanced perspective. Immediately, we can see that Perez is definitely a good central defender in possession of the ball. He has good passing volume (83rd percentile for passes per 90 and for received passes per 90) and his ball progression is clearly dangerous (83rd percentile) we can also see, however, that he does not play that many of these passes into the final third as he is in the 39th percentile for dangerous passes. 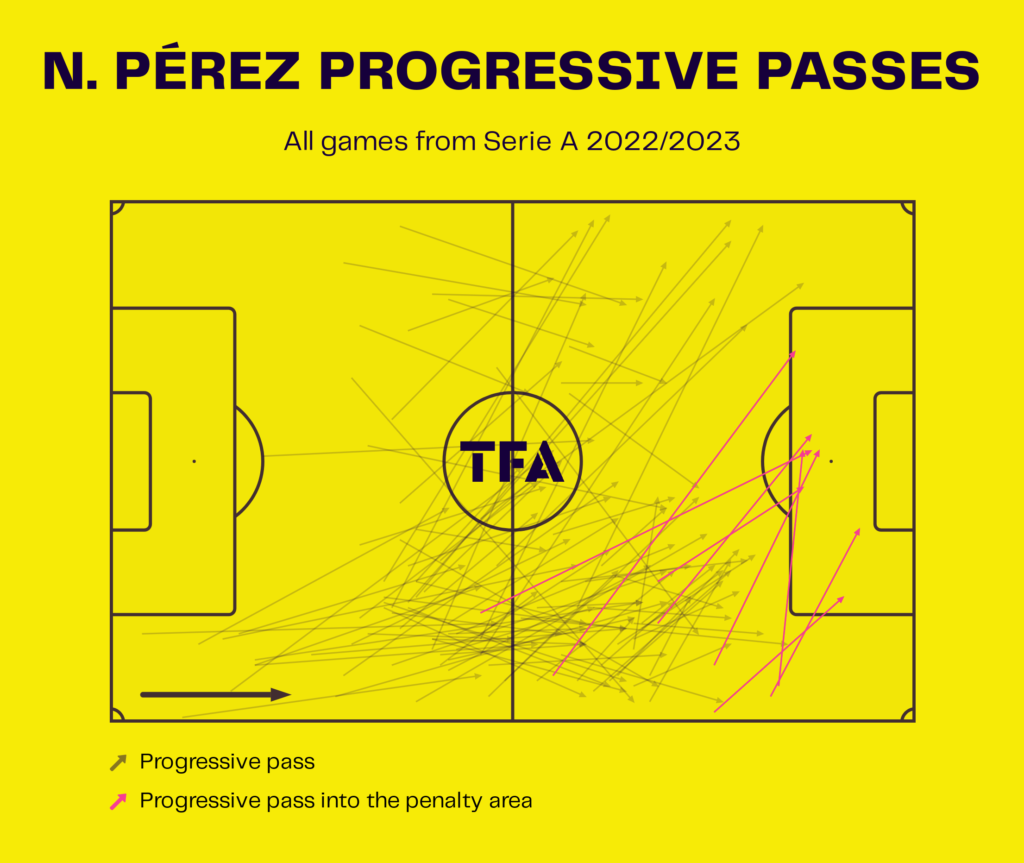 We can use event data to then drill down further into the way that Perez is progressing the ball. The pass map above breaks down the start and end position of each pass that has been tagged as a progressive pass. You can see that, although he has made some passes that have accessed the penalty area, the vast majority of them have come from deeper positions and on the right side of the pitch.

Perez has emerged as a key player for Udinese in terms of moving the ball effectively from the defensive third to the middle third of the pitch. 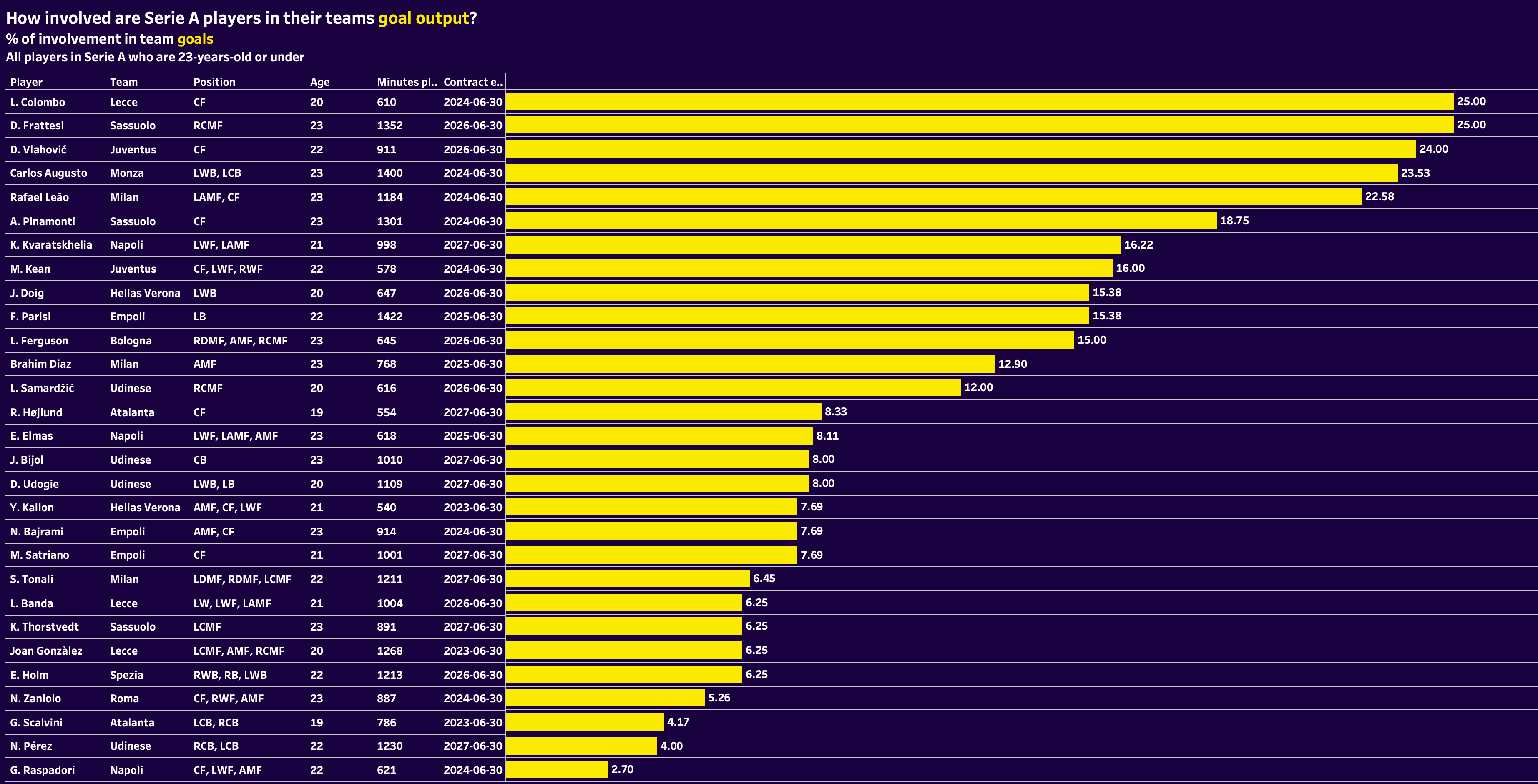 Next up we will look at U23 players in Serie through their contribution to their team’s goals. In order to do so, we are not only measuring how many goals they have scored but also how many they have assisted. By combining these two metrics into goal contributions we can then find an accurate picture of how players have contributed to their team’s overall goals.

Once again, there are clearly some interesting players towards the top of our ranking, with Dusan Vlahovic, Rafael Leao and Khvicha Kvaratskhelia all featuring prominently. Instead of those players, however, we have selected the 23-year-old Sassuolo midfielder Davide Frattesi. He has played 1,352 minutes for Sassuolo in Serie A and he has contributed to 25% of his team’s goals so far this season. He has also been linked extensively to moves to UEFA Champions League quality clubs now that the transfer window has opened again. 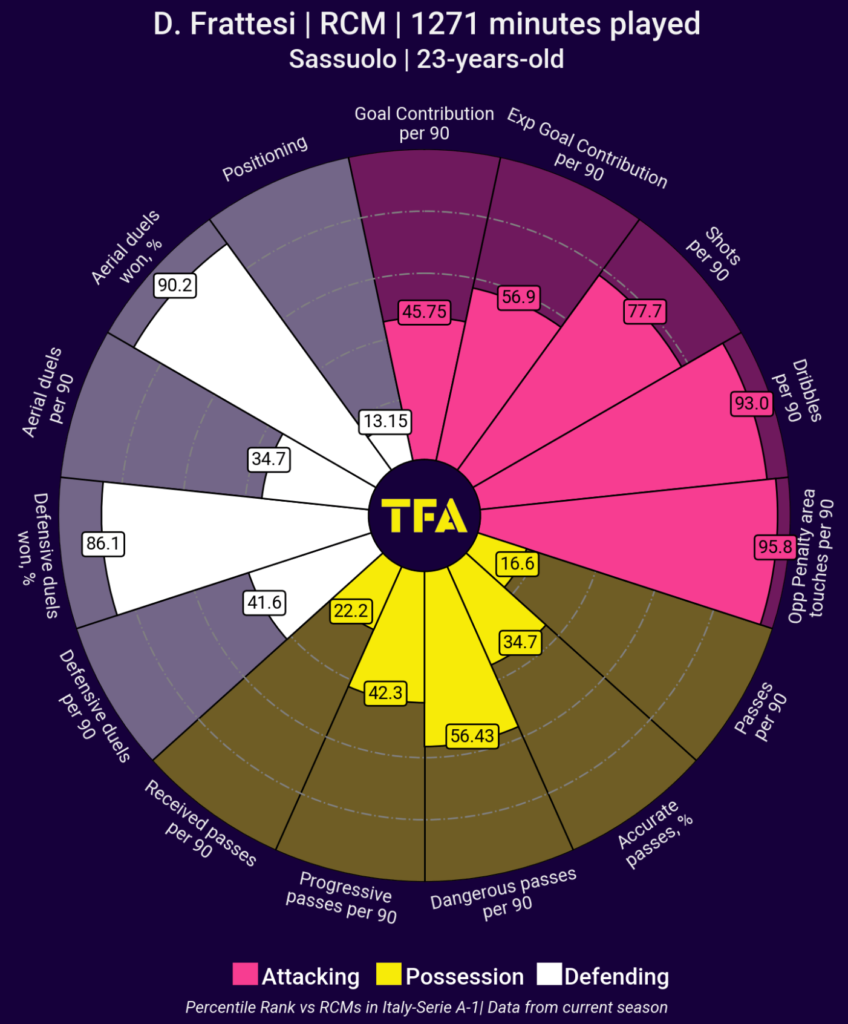 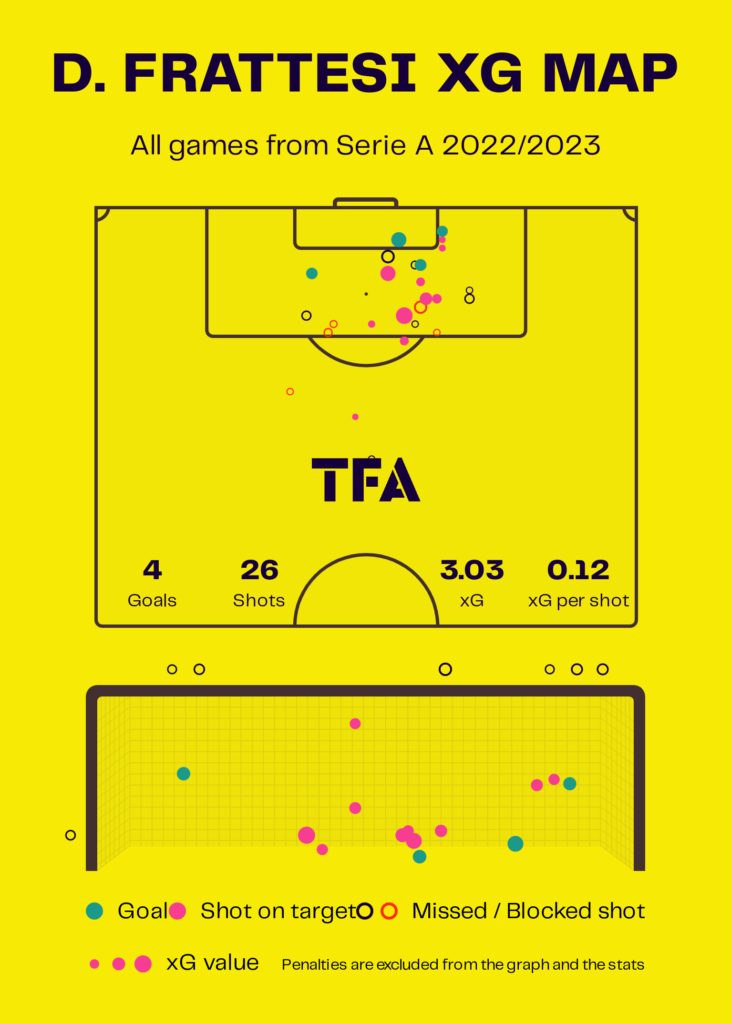 Once again, we can use event data in order to drill down further into the performance of the player that we are interested in. As you can see, Frattesi is very much a midfielder who provides danger and threat inside the opposition penalty area. His goals have all come from within the penalty area and in front of the penalty spot. He is adept at making late runs to access the penalty area in order to attack and take advantage of space. 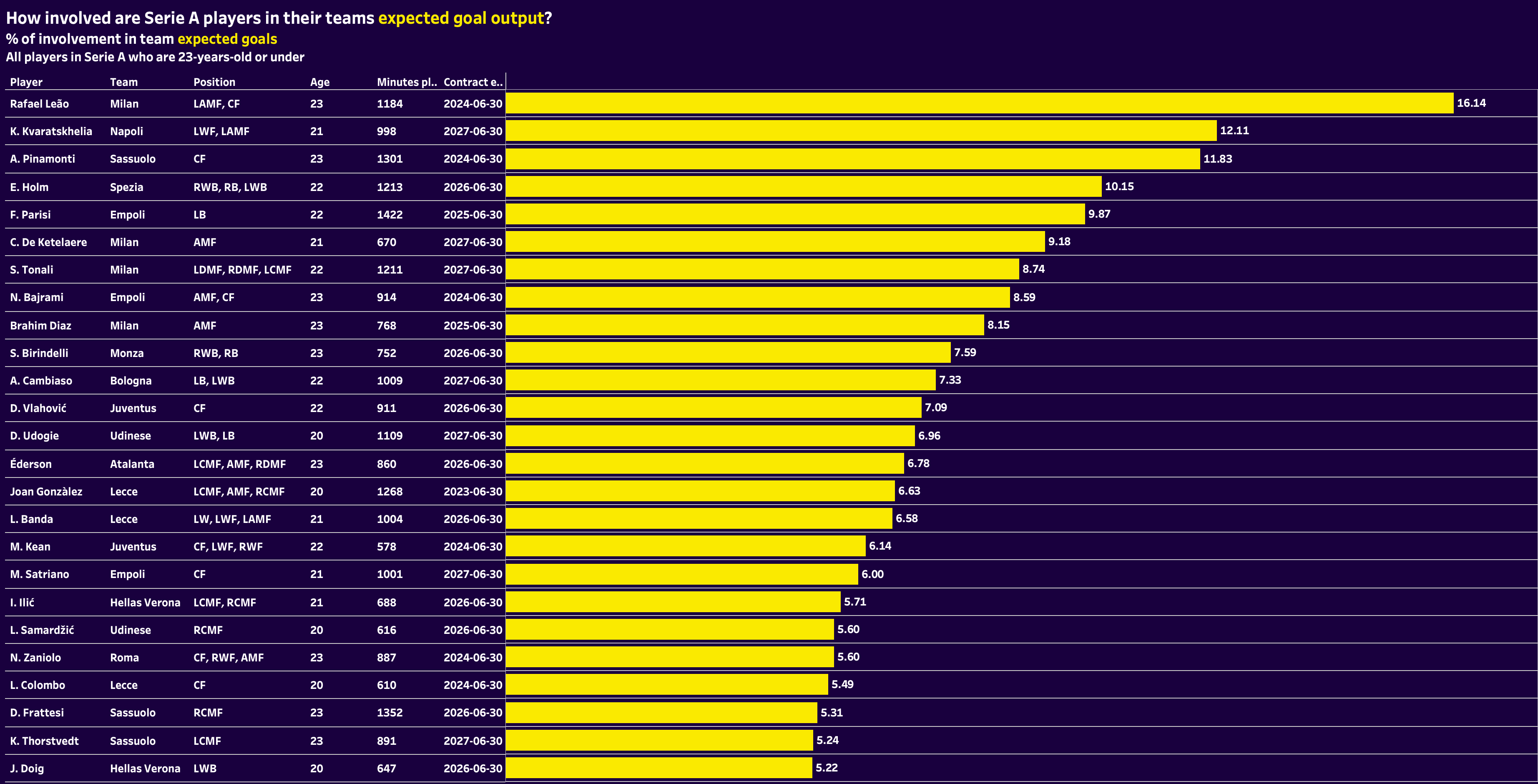 Next, we will look at the impact that players in Serie A are having this season on their team’s expected goals output. In order to find this we use a similar approach to the way that we found the contribution to the goals above. Combining players xG and xA per 90s, we create a metric called expected goal contributions. We can then calculate the % that each player has contributed to their team’s xG.

Once again, there are familiar names towards the top of the rankings with Napoli’s Khvicha Kvaratskhelia and Rafael Leao of Milan being the top two players. For the purposes of this article, however, we will turn our attention to the 22-year-old Empoli left-back Fabiano Parisi. At the time of writing Parisi has played 1,422 minutes so far this season for Empoli and he has contributed to 9.87% of Empoli’s total xG. 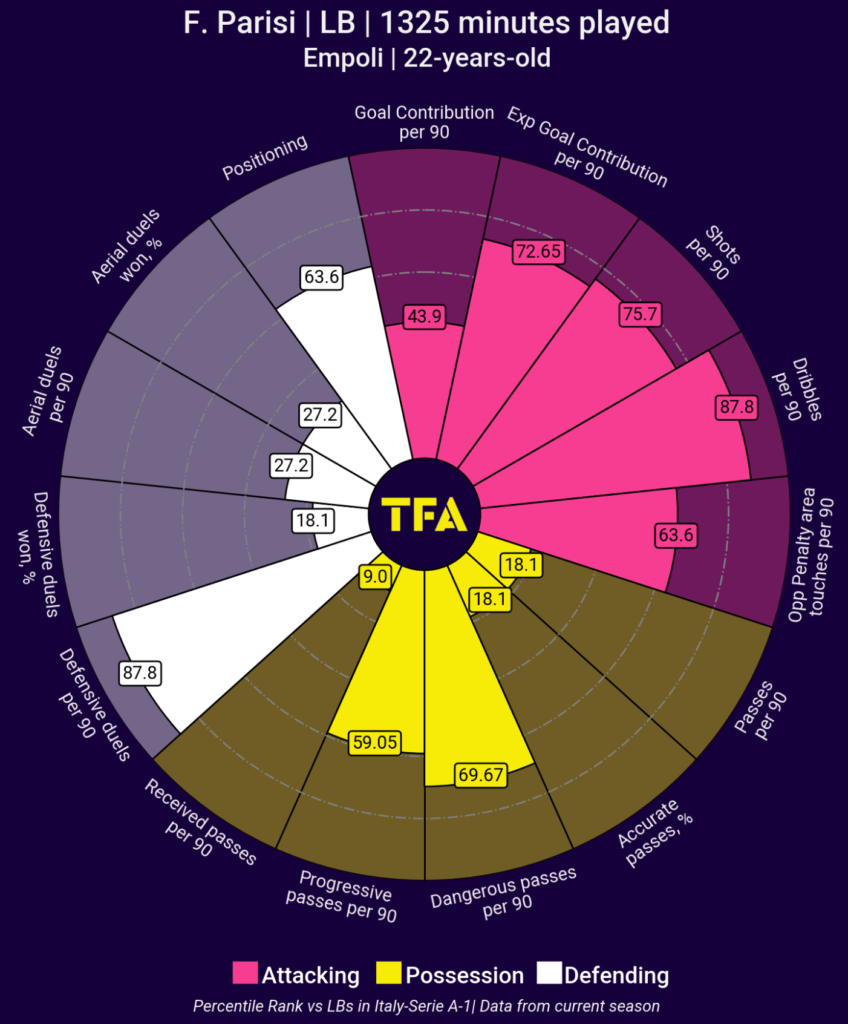 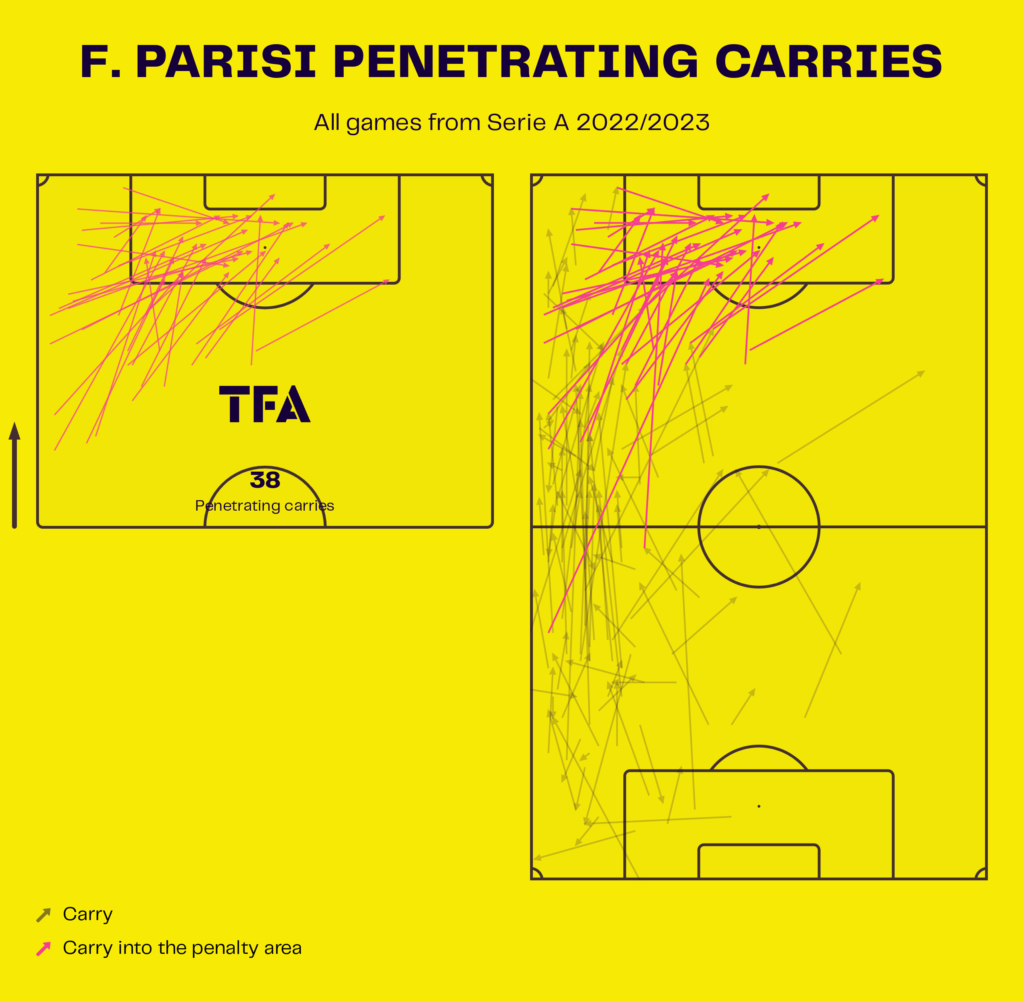 In this article, we have identified young players from Udinese (8th place) Sassuolo (16th place) and Empoli (13th place) showing that, by changing the way that we use data for player identification, we can cut through the noise and identify strong performers from clubs further down the table.

By implementing these metrics into a consistent workflow, recruitment analysts and scouts can add extra layers and depth to their ability to identify players.