It was another huge disappointment for Gennaro Gattuso’s Napoli after they secured the victory on Juventus and Sampdoria. In this round of Serie A, they played against Lecce at the Sao Paulo. And, even though starting a strong team, they failed to gain any point to reduce the margin with AC Milan.

In this tactical analysis, we will show you how Lecce beat Napoli. It is an analysis that focuses on tactics.

Napoli started in a 4-1-4-1 formation, with Kalidou Koulibaly returned to the starting lineup and partnered with Nikola Maksimović; Giovanni Di Lorenzo returned to the right-back position; Stanislav Lobotka was pushed to an advanced position as Diego Demme started as a sole pivot. It was the first start for Matteo Politano at Napoli.

Fabio Liverani’s team played in a 4-3-3 formation, with the exact same team in the win against Torino. The midfield trio was formed by Alessandro Deiola, Žan Mejer and Antonín Barákm; Gianluca Lapadula, Riccardo Saponara and Fillipo Falco were the front three.

In this game, Lecce did not press high to disrupt Napoli’s build-up, they only pressed when they managed to force Napoli to go to the flanks and saw a predictable pass.

Politano started ahead of José Callejón on the right flank. However, given to the limit of a left-footed player, when he dropped to receive the ball, his closed body orientation made him difficult to see where the opponent was coming.

As a result, he was caught a couple of times before he received the pass, including this situation. When Di Lorenzo tried to pass him the ball, Politano had no idea where Giulio Donati was, hence, he lost the ball in his own half. 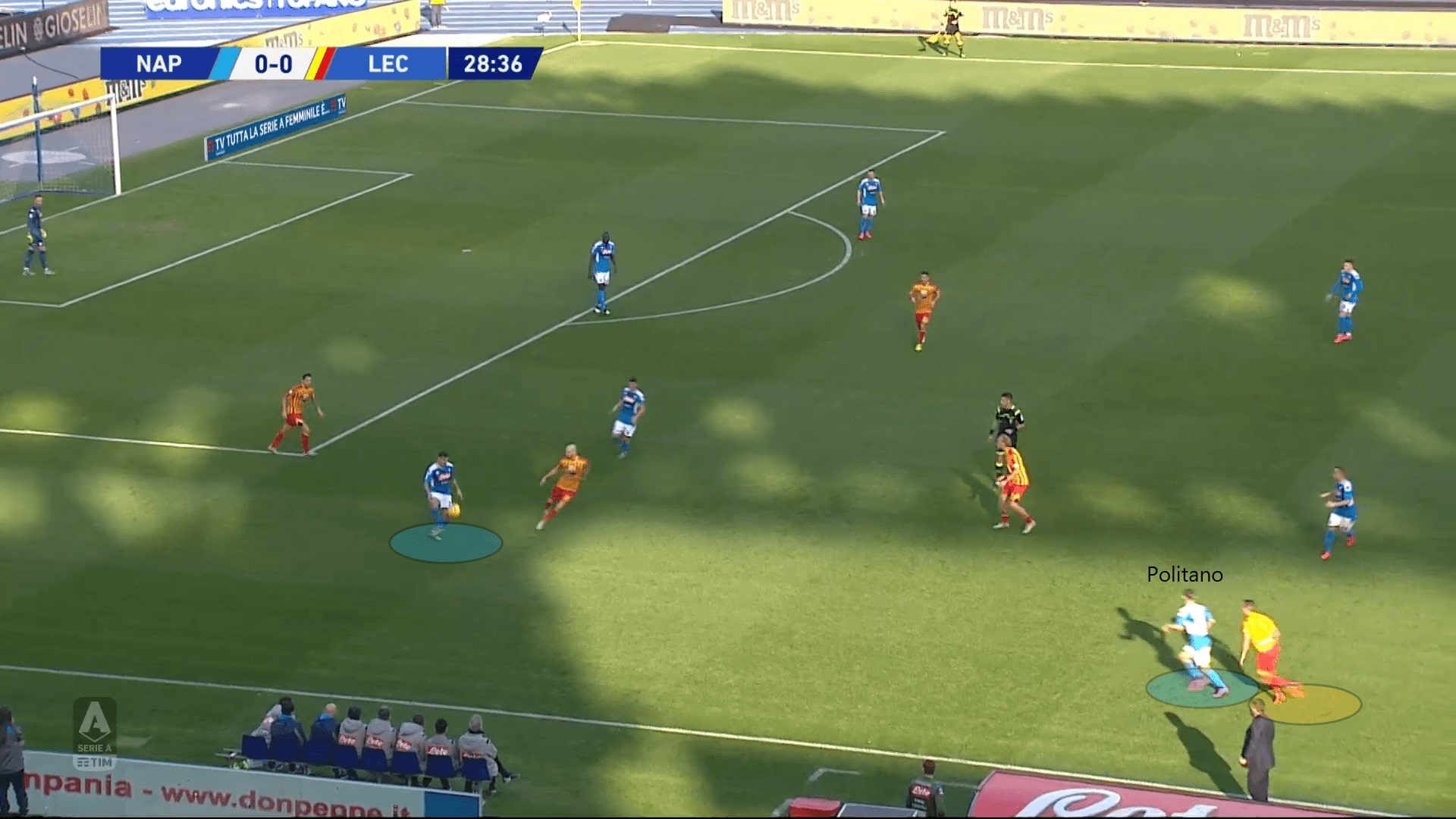 Lecce spent most of their time defending with a low block. Intriguingly, they set a zonal defence in a 4-5-1 shape, with both wingers, Falco and Saponara dropping to the midfield line.

Generally, it required the whole midfield line to shuffle across the pitch to cover the defenders. The rules were not too complicated. For the midfield three (Deiola, Mejer and Barák), they tried to stay compact to prevent the central penetrations.

When one of them stepped out, the one beside him should cover the player and spaces he left behind (usually they covered the player, as they defended in a compact shape, Napoli only had limited spaces).

The players stepped out to press according to the position of the ball. By theory, when the ball was vertically in front of them and there were teammates around, they could step out to press.

In this example, as Koulibaly had the ball in the half-spaces, it was Mejer, the right midfielder’s job to step up. When Slovenian stepped out, his partner, Deiola also prepared to cover Piotr Zieliński. Therefore, even Koulibaly tried to pass through the players, Lecce still managed to win the ball back. 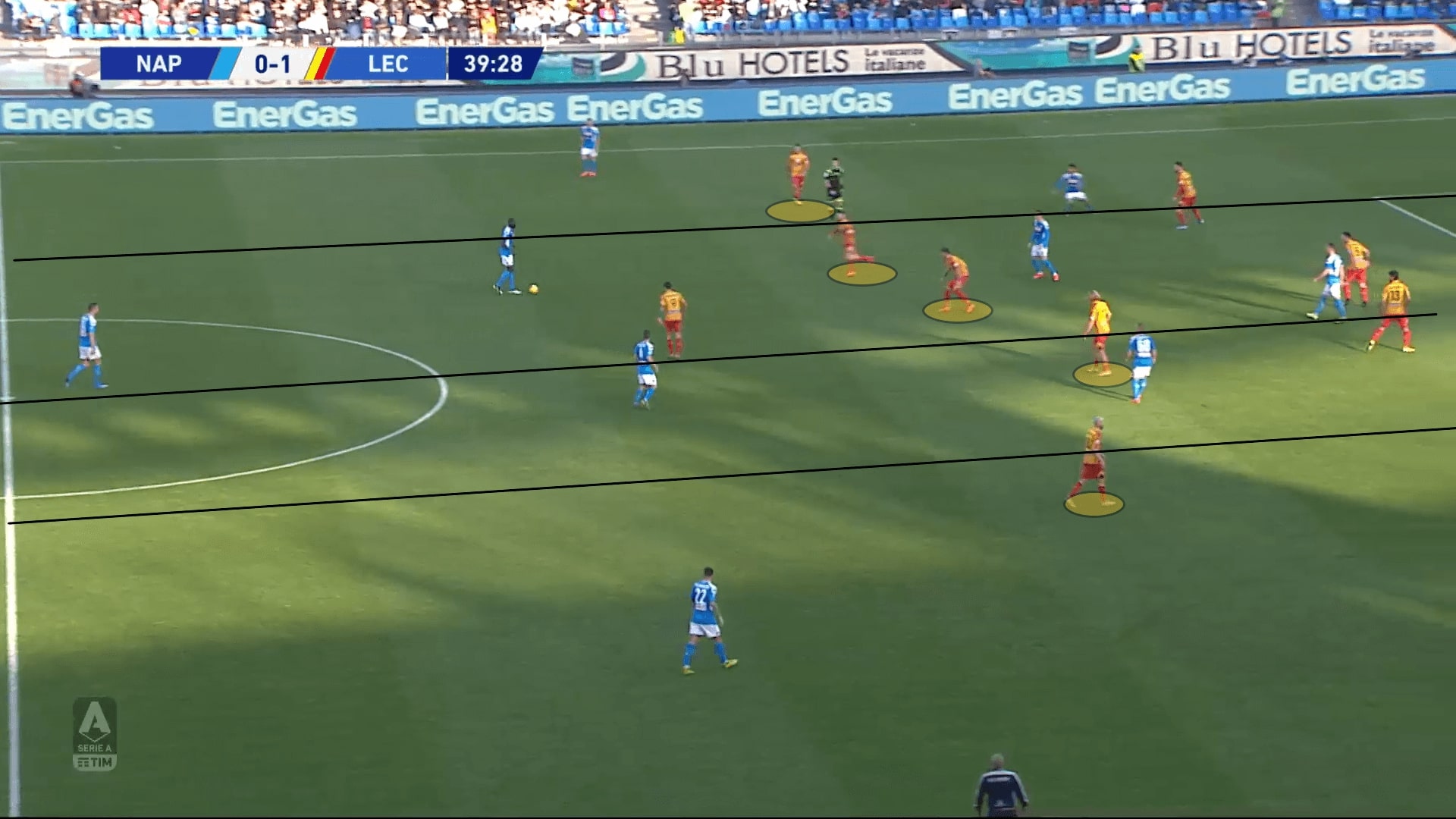 Napoli on the flanks

For Napoli, they struggled to penetrate centrally on the ground given to the low block as explained. When they attacked, they continued to utilize the strong left channel, with Mário Rui providing the width.

The Portuguese left-back attacked frequently in this channel, in this match, he contributed 12 crosses and he completed four of them.

Meanwhile, Napoli also used a similar approach to attack with the crosses. Arkadiusz Milik remained as the main man in the attack, with the support from midfielders making forward runs. Usually, the striker would go to the far post and allow the midfielder to attack the front post.

In this situation, when the moment Rui crossed, it was an ideal situation as both Zieliński and Milik were isolated against a defender. Luca Rossettini could not go to the front post and clear the ball as he was distracted by Milik. 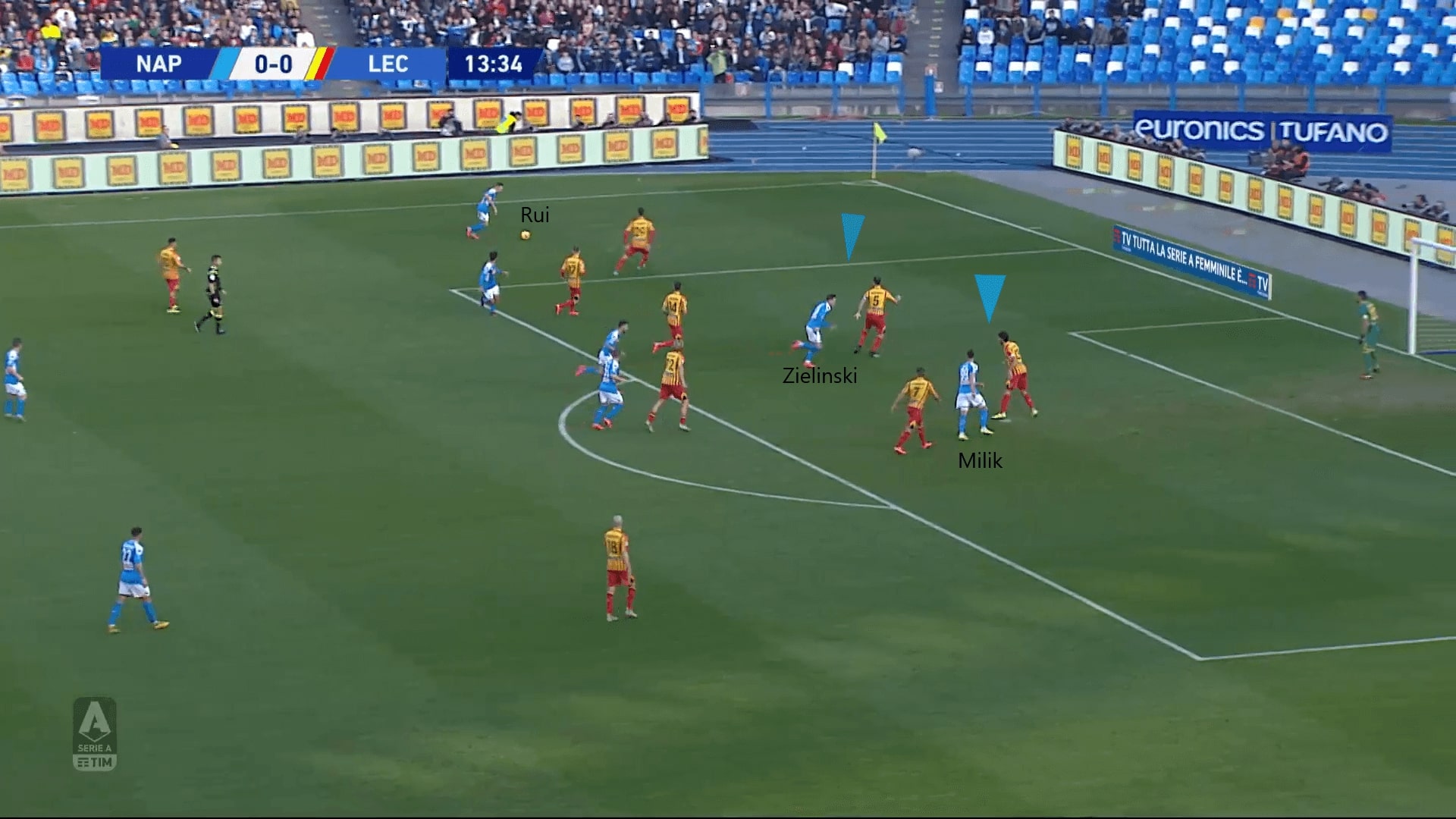 On the right, the players in this match were Lobotka, Di Lorenzo and Politano. The greatest difference between Politano and Callejón was the former Inter man usually uses his left foot.

Maybe, Gattuso tried to create a similar combination like Lorenzo Insigne, Rui and Zieliński. When receiving the ball, Politano could drift inside as it was more natural for a left-footed player to do this. Meanwhile, Di Lorenzo provided the overlapping runs and Lobotka attacked the box.

As shown in this image, Politano drifted inside. This approach was okay in the early stages of the game, but as the game went on, it seemed the unfamiliarity between the players was the flaw of this approach. Sometimes we saw Politano released Di Lorenzo but the right-back could not pick the ball, or Lobotka failed to connect the two. 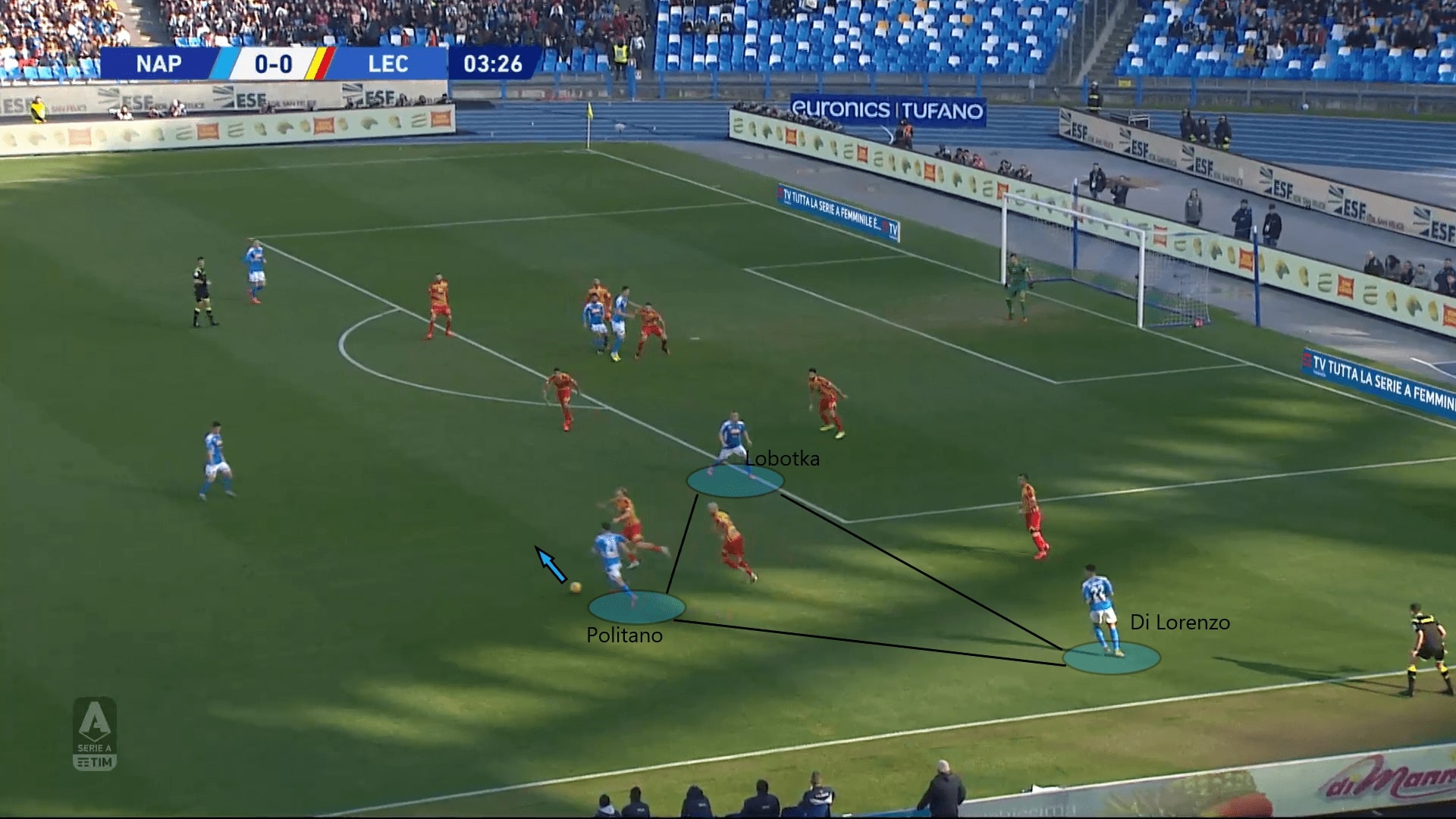 Another tool in Gattuso’s bag to unlock the defence of Lecce was the lofted ball which hit the spaces behind the defenders.

As shown in this example, Insigne tucked inside, recognized the spaces behind the defenders. Politano’s chipped the ball to the skipper, sent him to face Mauro Vigorito one on one. Lecce defenders were unaware of this kind of chipped balls, but Napoli only found a goal when the game almost end. 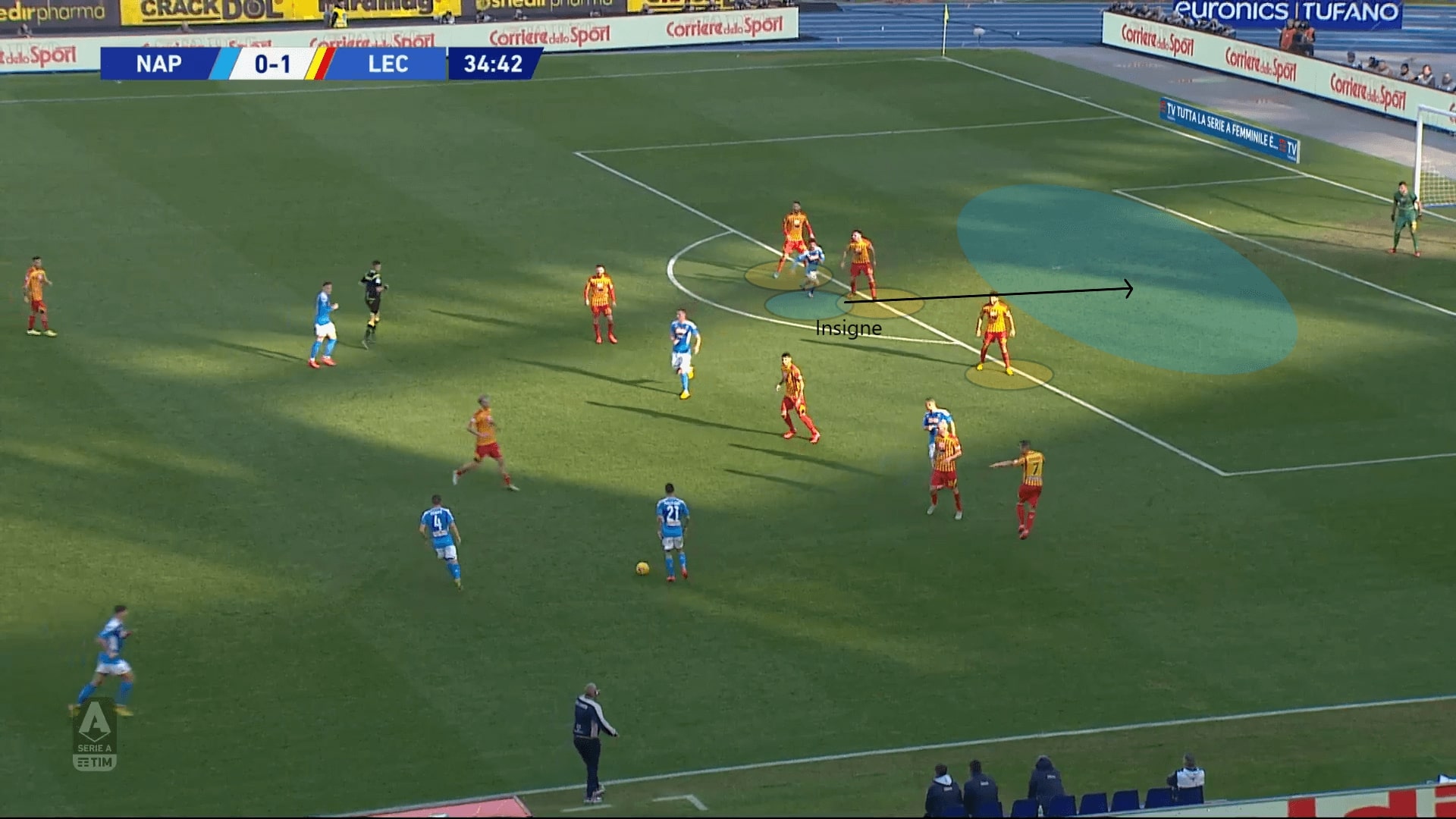 For Lecce, they played very directly to attack. In the first phase of the attack, they were constrained by the press of Napoli, hence, unable to move the ball comfortably to play out from the back. They were forced to play long.

As illustrated in this image, Milik had good positioning sense during the press, even though he was not closing a defender intensely. As, in this image, Rossettini was forced to play long as Lecce lost the numerical advantage. His partner, Fabio Lucioni was covered by the Polish. 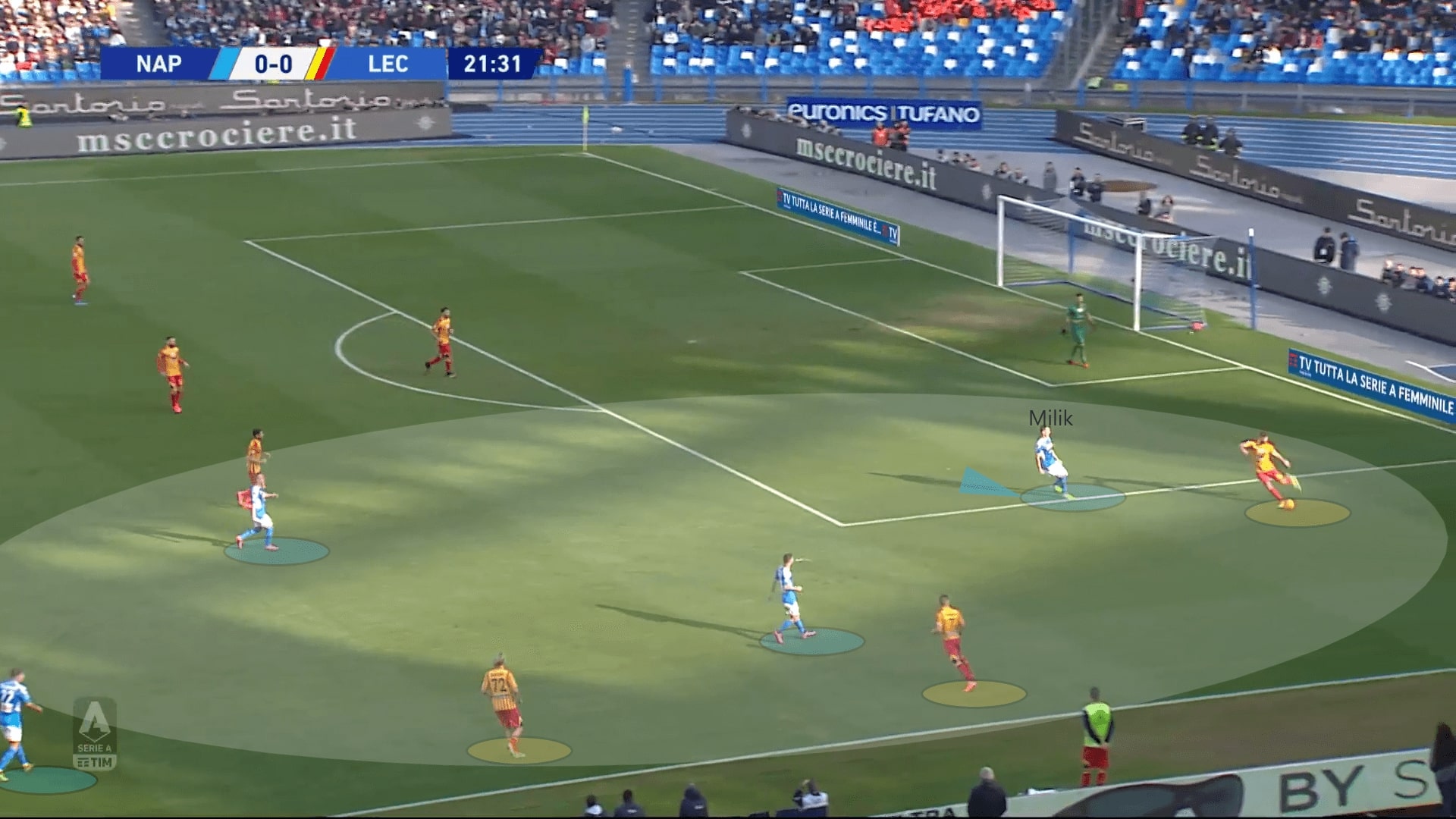 However, when given chances to play the ball, Lecce were good at finding the front players with a diagonal pass or a long ball. In these situations, usually it was Saponara to drop and receive the ball out wide.

As shown in this image, the two lines of Napoli was unorganized. In order to stay compact horizontally, the full-backs of Napoli liked to stay close to the centre-backs. As a result, Saponara could receive Mejer’s pass without any pressure.

With this simple approach, Lecce drew the pressure to the ball side and played the diagonal passes to progress the ball easily. 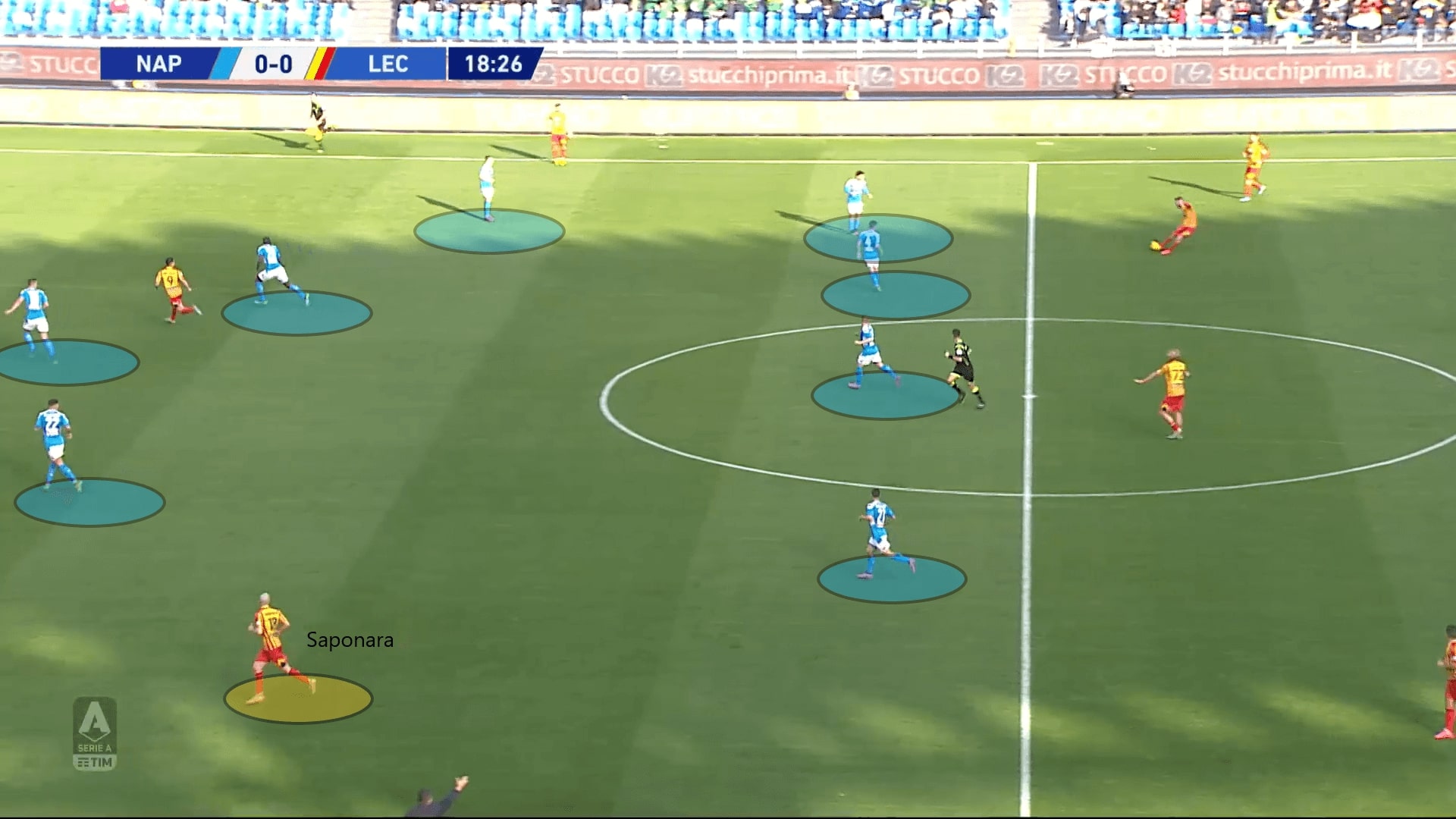 Saponara had a good game, he made an impact which helped Lecce to secure the three points. As an experienced 27-year-old player, he knew to pass wisely and managed to find his teammates with different types of passes.

Below is the pass map of Saponara. He made 47 passes and completed 38 of them. For the types and directions of his passes, some of them were used to combine with the left-back, Donati.

For another type of pass, his switch plays were also important, as shown, he switched the ball to the right flank, and switched the attacking focus of Lecce as well. With Saponara, a player possessed calmness and composure on the ball, Lecce’s attack was more unpredictable, as he always picked a good option.

When Lecce had the ball in the final third, it was the tasks for the full-backs to provide the width and overlapping runs on the flanks. In this example, when Falco holds the ball, the right-back, Andrea Rispoli came forward to provide supports.

For the rest of the Lecce players, of course, the striker, Lapadula stayed in the box to reach the cross. And, for the winger and midfielder(s) on the far side, they should also enter the box to look for chances as well.

In this situation, Falco released Rispoli, and Saponara joint Lapadula to attack the goal in the six-yard box. For Barák, he also moved forward in case there was a loose ball to pick. 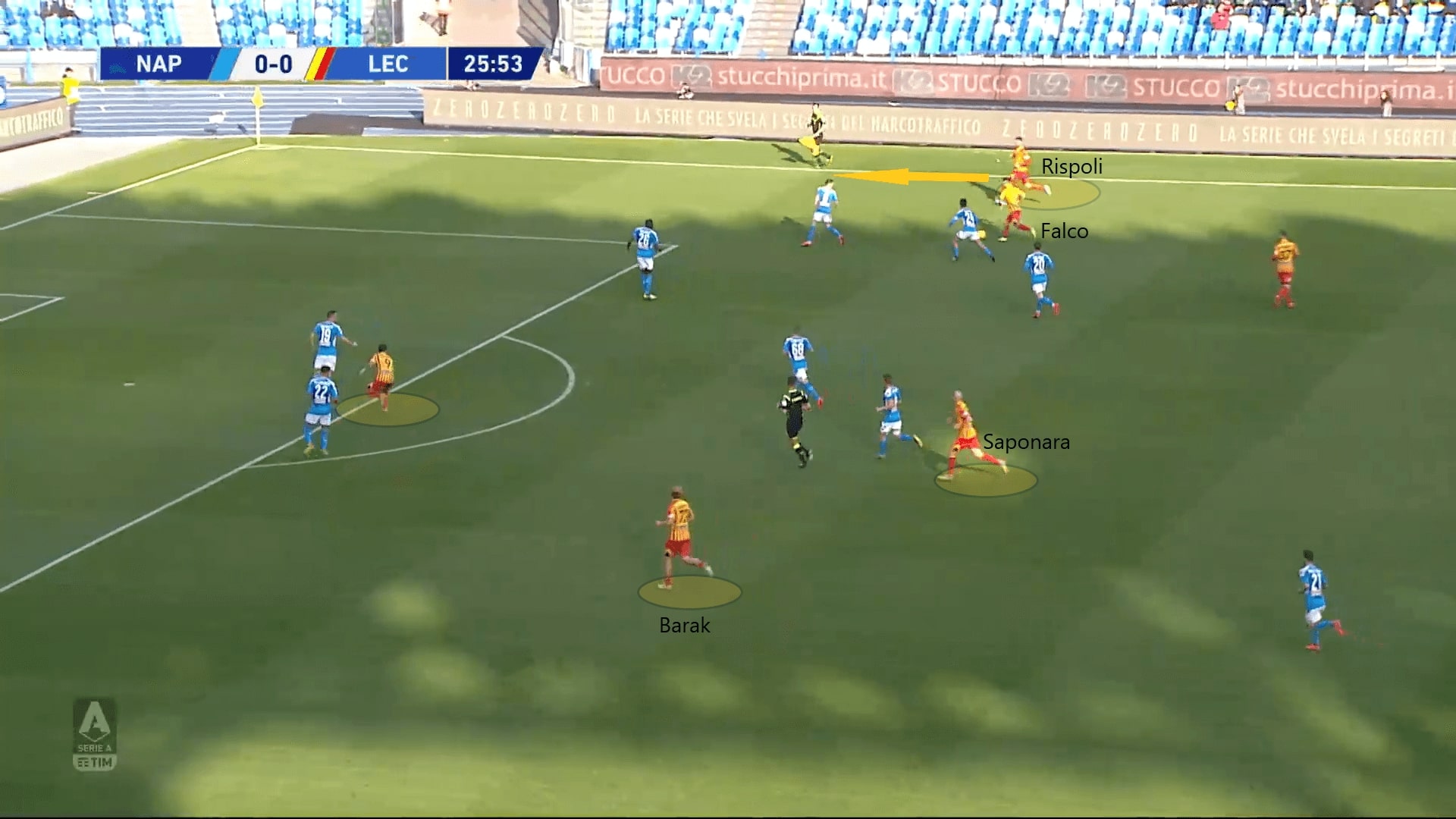 The threat of Lecce’s simple offensive approach was maximized due to the poor marking of Napoli. In the last game, Konstantinos Manolas failed to keep Fabio Quagliarella in his pocket, and the Greek was on the bench. However, this problem was unsolved even Koulibaly returned to the team.

The biggest problem when Napoli defending the crosses was the focuses of players. Their defenders tended to focus on the ball instead of tracking players.

For the two full-backs, they lacked sufficient heights and physicality to defend in one v one situations. Di Lorenzo was 183 cm, and Rui was 170 cm only. Koulibaly failed to act as a leader of the defensive line to remind or even instruct his teammates.

For example, on this occasion, when Rispoli crossed, Napoli had enough numbers in the box to defend, even though Lecce committed the midfielders into the box. However, on the far side, it was a two v two situation. Worse still, Maksimović and Di Lorenzo only paid attention to the ball and forgot the opponents behind them.

They should thank David Ospina for saving a couple of close-ranged efforts, or else Napoli would have conceded more. 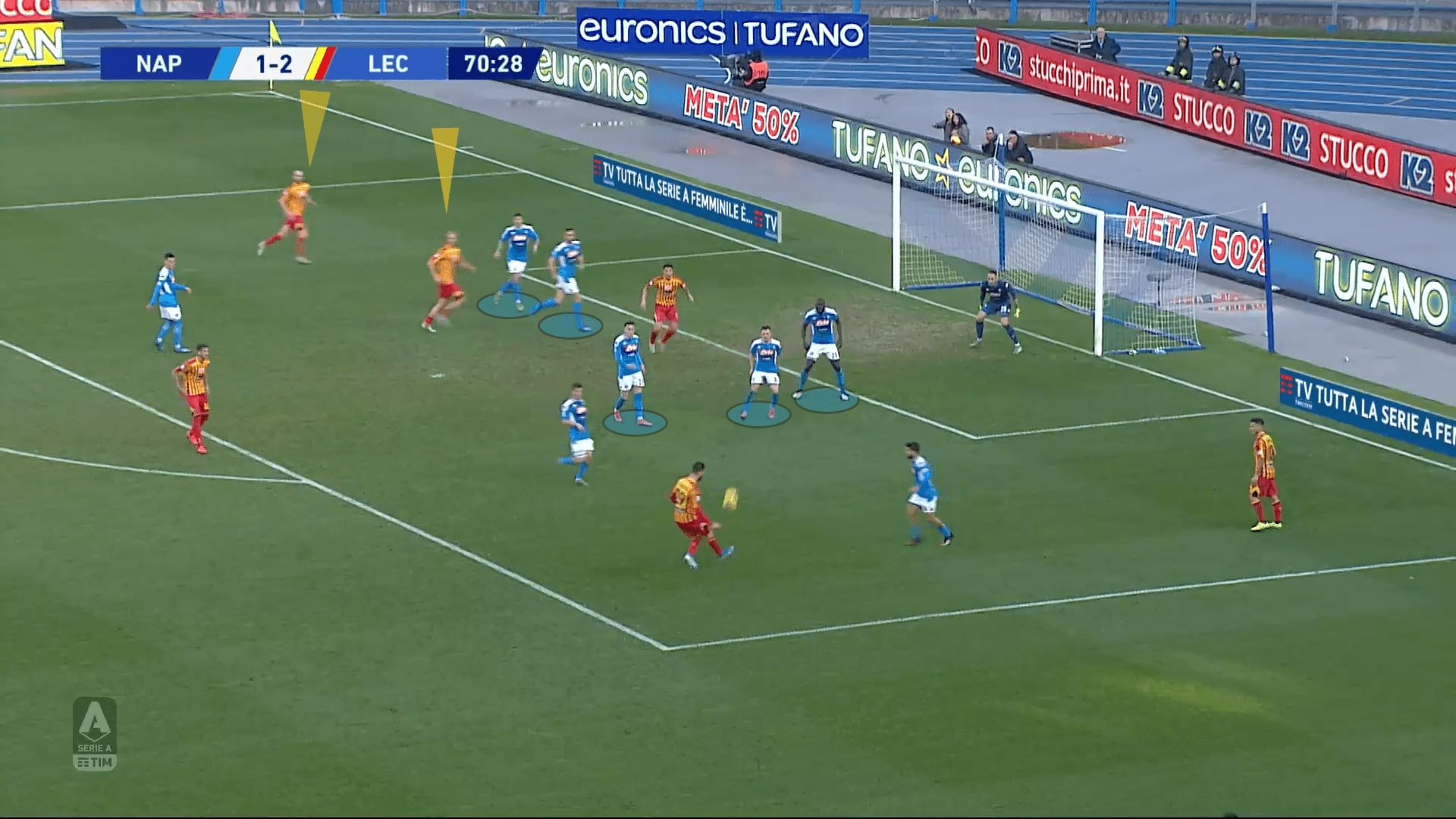 For the first goal they conceded, it was a similar problem. At the moment when Saponara crossed, Lapadula was between Rui and Koulibaly. Napoli had enough number (two v one) to keep the Italian under control.

However, both players focused on the ball too much, when Ospina saved Falco’s effort, they let Lapadula tapped-in easily, as they forgot to mark him.

Another problem which kept occurring recently was the insufficient protections from the midfielders to the defenders.

In this goal, Zieliński could have marked Falco tighter, as there were noticeable spaces which the defenders could not cover. However, he was too late, and he let Falco shot easily. 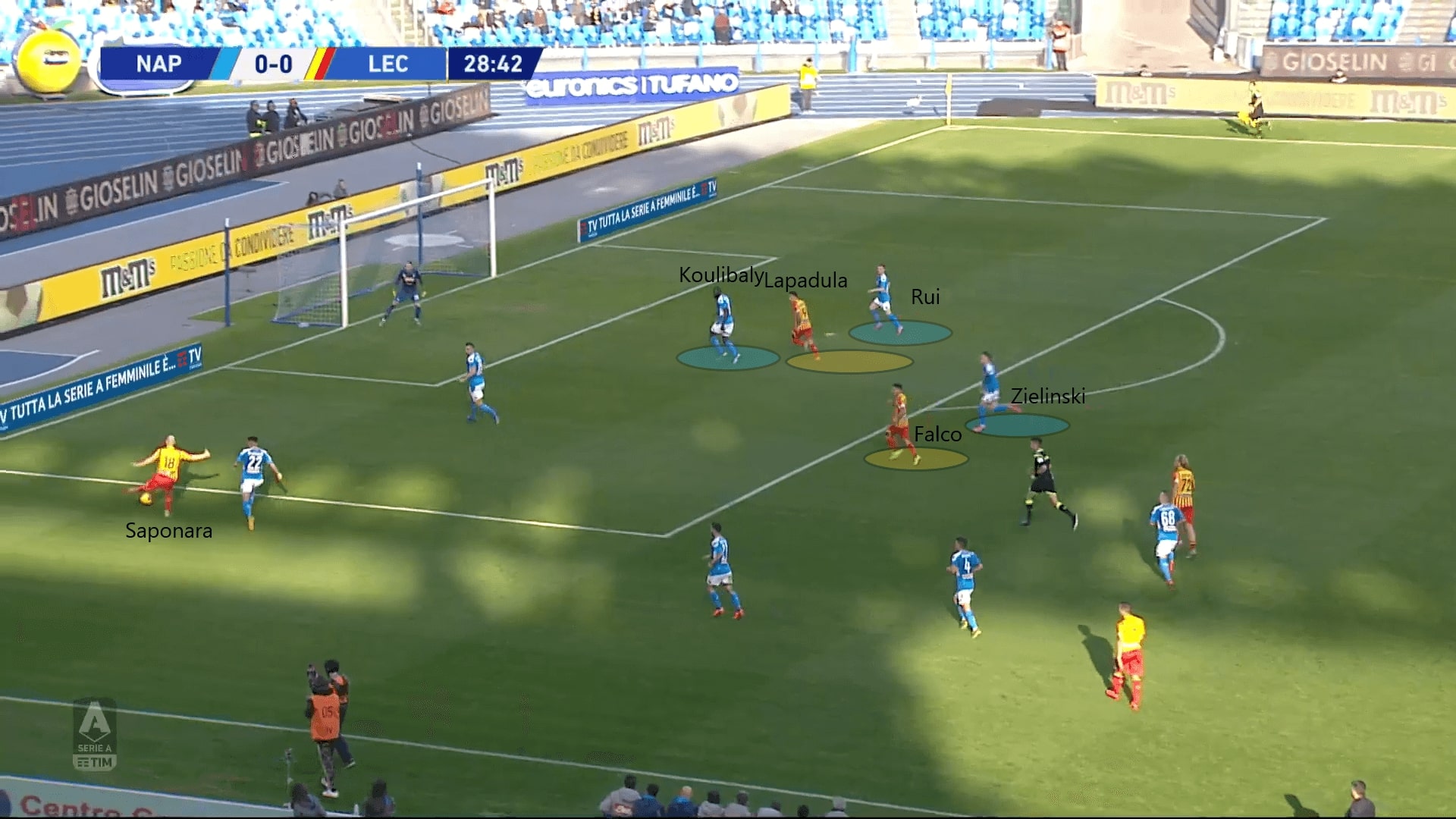 Mertens on, Lobotka off

Gattuso reacted quickly when his team was one-goal down at half time. He quickly used Dries Mertens to replace Lobotka, and we thought this was a good substitution which gave Napoli more inspirations in the final third.

Before the game, Gattuso might not be expecting Lecce were defending this deep, hence, he started Lobotka, and in case Napoli’s build-up plays need an extra man, the Slovenian could drop.

Since Lecce were defending deep and Napoli could access the final third without encountering many difficulties, playing Mertens would be a better option.

First, the Belgian was stronger than Lobotka in the final third. His space recognition, decision makings and penetrating passes could help Napoli to unlock the defence.

For example, in this situation, Mertens recognized the narrow gap between Lecce defenders and spaces behind them. Insigne was making a forward run and he needed someone to release him. Mertens picked the Italian with a pinpoint ground pass and created a one v one situation for Insigne, this was a pass hardly could Lobotka make. 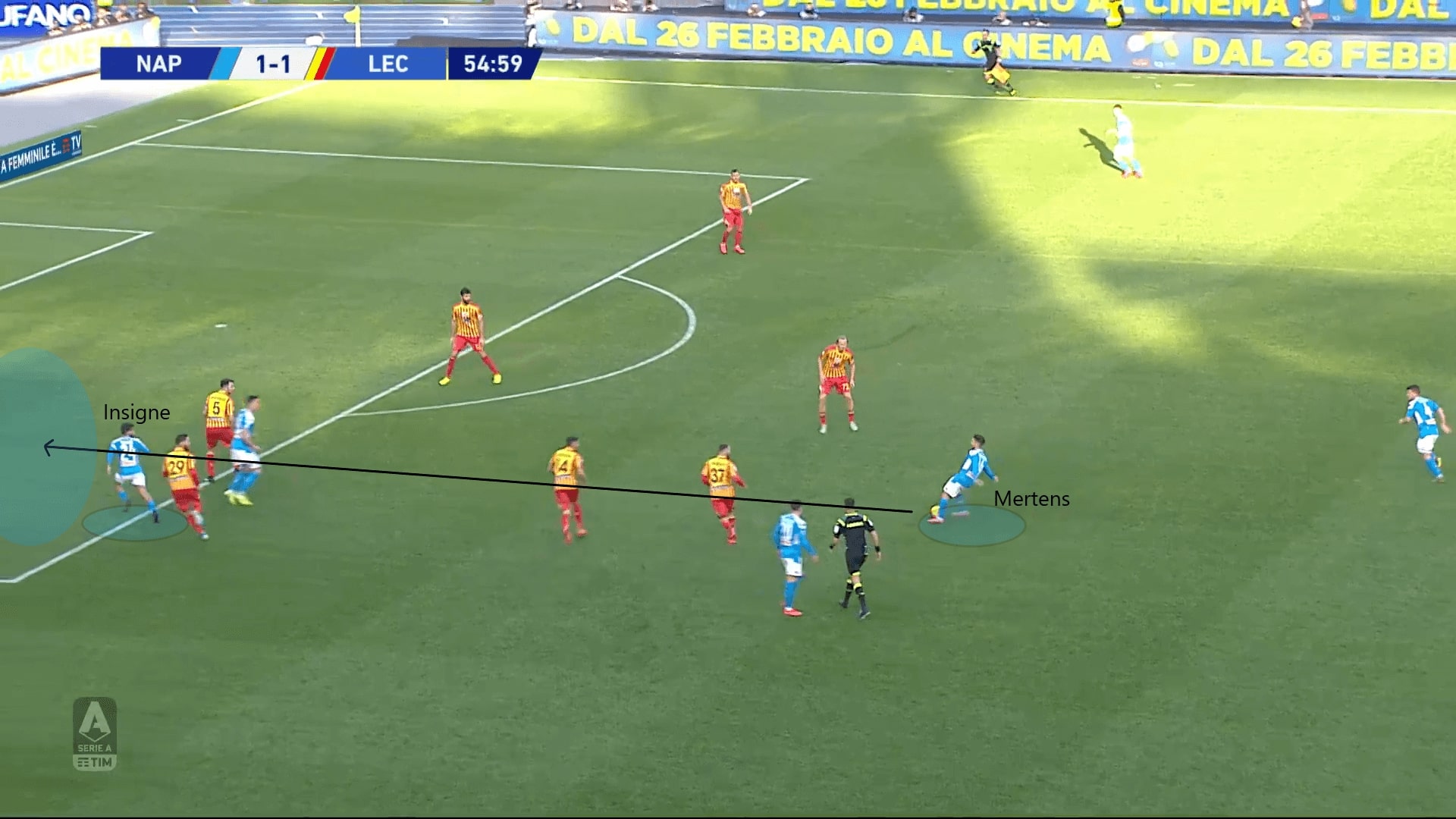 For another part, Mertens was better to combine with the rest of his teammates as he has been playing for the club for over five seasons. He had better chemistry with Insigne and Milik.

Also, the task of Mertens was to be a creative force and moved freely in the final third, he could overload a certain area and occupy the half-spaces with any teammates.

For example, Napoli had three players on the left in this situation. For Mertens, as a right-footed player, he was natural to drift inside, kept the ball at the centre. He tried to combine with Milik, and a simple drop of a shoulder helped the Belgian get rid of the marker and created angle for the pass quickly. 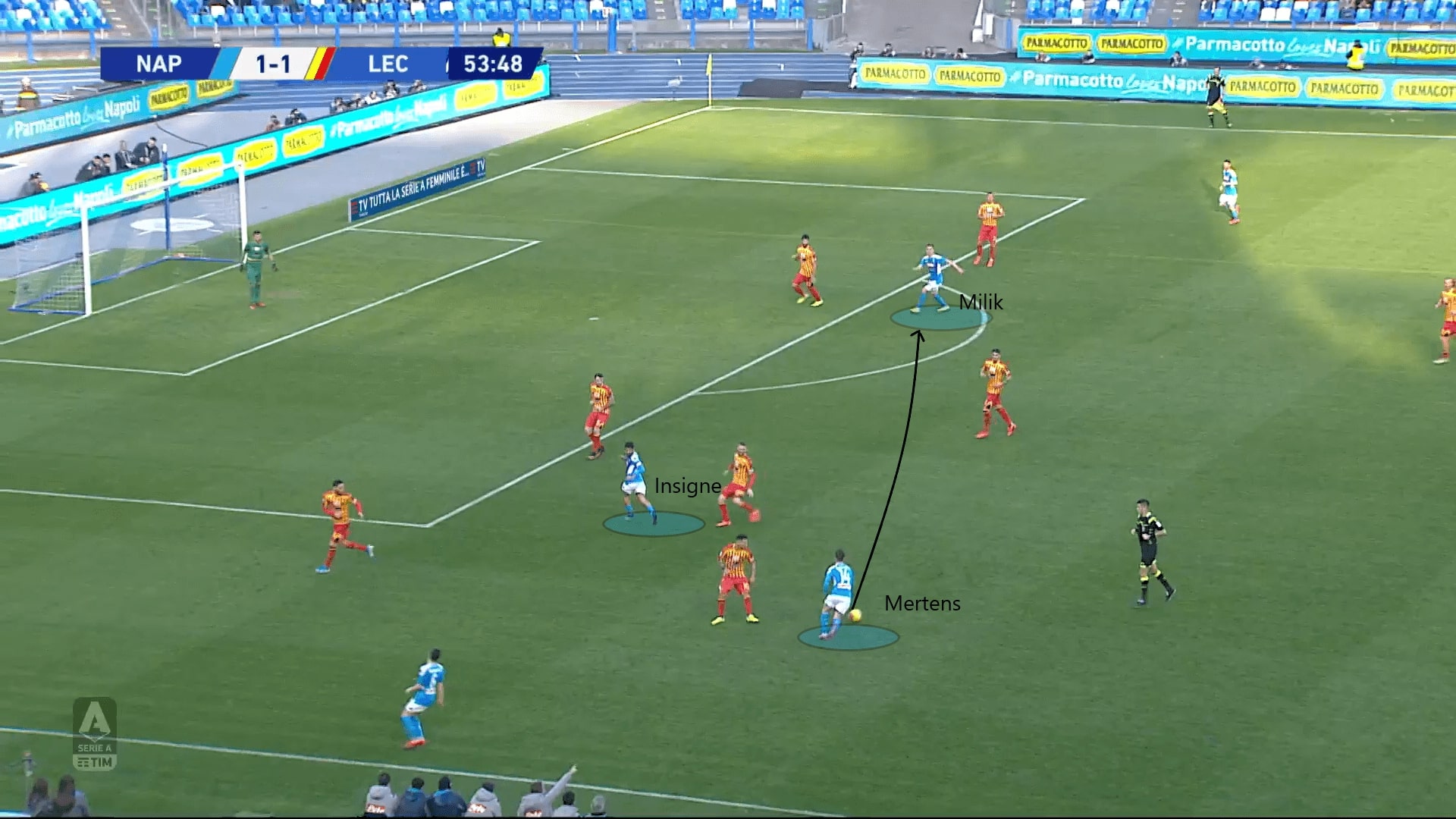 To conclude, it was disappointing for the Napoli fans to see their teams losing again. In fact, the home team had an xG of 2.85, higher than Lecce’s 2.43. They just could not finish in front of goal, then, the defensive issues continued to become a trouble. In general, Gattuso’s men were playing possession-based and attacking football, but they definitely need to have some better results to convince their fans.

Once again, Lecce handed in a strong performance against the strong forces in the league. Both Inter and Juventus lost points on them, and, these three points were vital to keep them out of the relegation zone and maintain a three-point margin with Genoa.