After scoring 15 goals in 34 appearances (2,490 minutes), with a further six assists, one can say that Tammy Abraham has had a decent debut season at Chelsea. Previously, the 22-year-old had a few loan spells at other clubs, including Aston Villa and Bristol City, where he scored more than 20 goals in a single season. Despite missing a penalty against Liverpool in the UEFA Super Cup, Abraham still won a place in the team with his performances, keeping Olivier Giroud and Mitchy Batshuayi on the bench.

In this tactical analysis scout report, we will show you the strengths of Abraham. It is also an analysis that explains the role of the Englishman in Frank Lampard’s tactics.

The below graph summarizes the strengths of Abraham by numbers. The former Villa man is sharp in some areas. Abraham had 113 touches in the box, 4.99 per 90 minutes, ranked 13th in the Premier League. With an average of 2.87 shots per game, his goal conversion ratio and shot on target percentage were 20% and 44.62% respectively. The goal/90 minutes ratio was 0.57. These statistics hint that Abraham was doing quite fine in terms of finishing.

Below is the heat map of Abraham. You could see his active involvements in the central areas, especially within the penalty box. Despite Chelsea attacking the flanks, the 22-year-old tended seldom move to the wide areas, and we will explain his role under Lampard in the coming section.

At Chelsea, Abraham mainly had two sources to receive a pass in the build-up phase. Since it was unnecessary for the Blues to play out from the back via the sole pivot, their full-backs were tasked to provide the out balls. Abraham is a 191 cm tall striker, and so he served as the target man as well.

The movements are twofold as shown in the following image. For the first case, Abraham stayed beside a centre-back, and his movement would depend on the situation. If it was a long ball, then, he attempted an aerial duel. If the pass was not deep enough, he dropped slightly and took a defender with him. On some occasions, when the central areas had another Blue, he freed himself to receive the pass in the wide areas. However, this movement was less likely to happen as Willian or Mount would cover the wide areas for him. 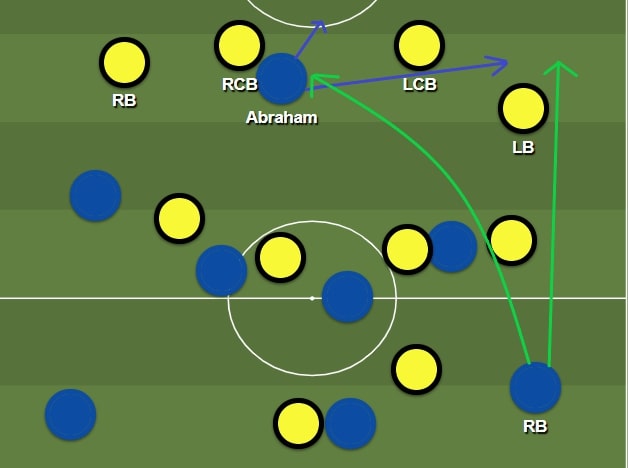 Despite playing as the lone centre-forward, Abraham also had the compatibility to play with a partner. Usually, when Chelsea needed a goal, Lampard would play Batshuayi and shift the formation to a 4-4-2 or a 3-5-2.

In such a case, as demonstrated in the following image, these two strikers could occupy both centre-backs, creating two 1 v 1 situations. With this approach, Abraham would be the striker lurking at the far post and as a target of the crosses. This maximized the strength of Abraham, as he was isolated against a defender. Please notice the gap between the defenders, Abraham was clever to read these spaces and attack them.

As mentioned, Abraham has physical superiority. Therefore, Lampard has tried to utilize his height in different phases of the game. Abraham served as a target man to receive the chip passes or long passes.

The 22-year-old is not a muscular striker, but his height helped him to win aerial duels easily. The stark contrast when jumping was illustrated in this image. Fikayo Tomori headed the ball in the air, with this aerial duel involving Abraham and Jesús Vallejo. When Abraham jumped, the Spaniard was nowhere near the ball. The attack was progressed as the guided pass reached Mason Mount easily, without any pressure. 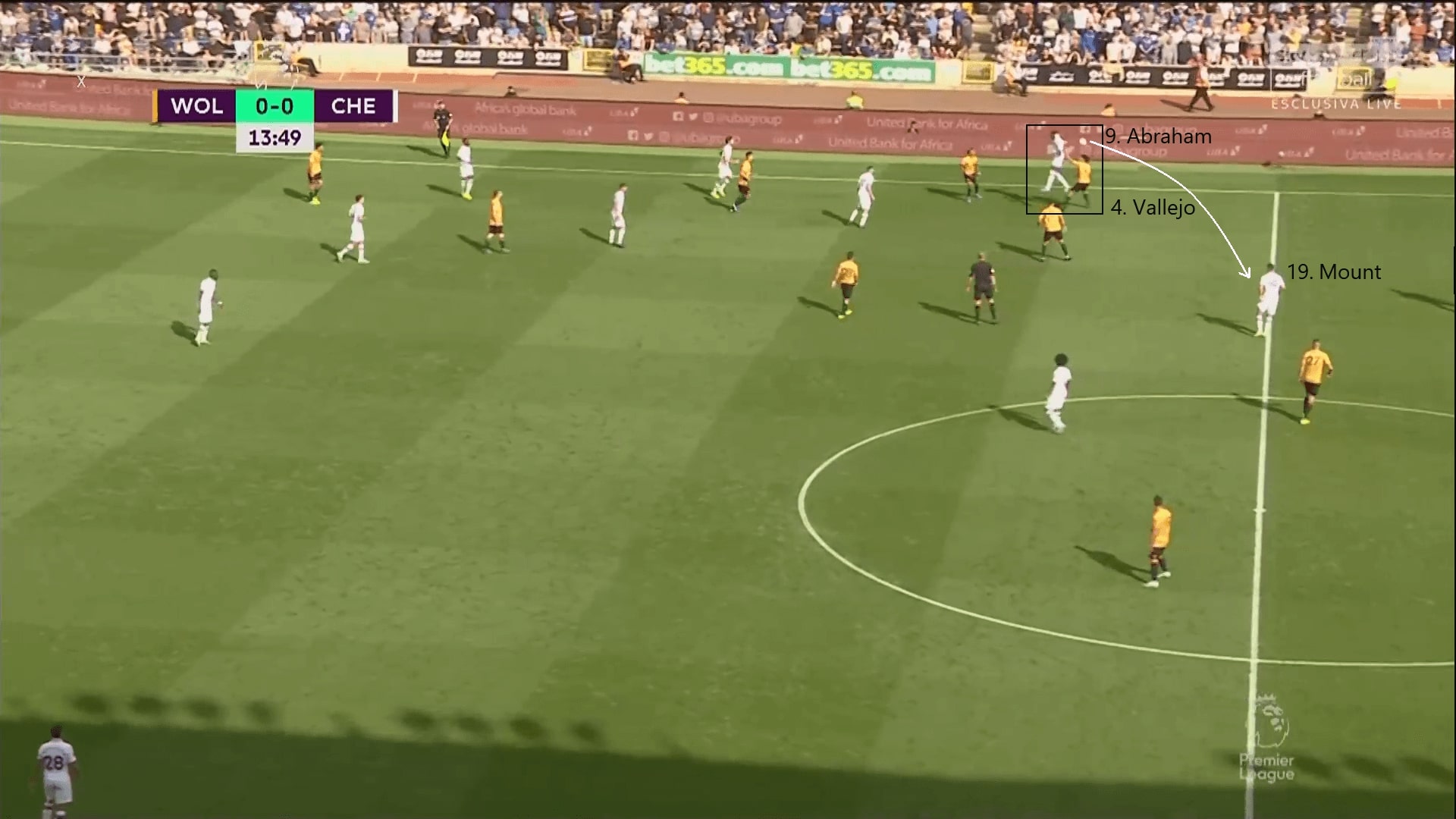 Also, the Chelsea no.9 could also use his body to shield the ball. In this case, Wolves’ Romain Saïss challenged Abraham from behind. Abraham used his body to separate the ball and the defender. Furthermore, Saïss could not see the ball clearly as Abraham was too big to deal with, and hence was unable to anticipate the next move of the target.

In this scenario, Abraham also demonstrated his recognition of space, as his second touch took the ball to the space between the Wolves players. Then, it was quickly released to the wide player, César Azpilicueta.

However, in some other cases, when Abraham was dealing with the pressure from behind, the pass was suboptimal as he could not resist the tight marking by using only his body. This might be the area for the Englishman to work on if he wants to further develop as a target man.

Capitalizing on Chelsea’s tactics, Abraham often chose his positions wisely. When playing teams with a back four, Abraham liked to position himself around the far side centre-back. When Chelsea attacked the flanks, they could commit the full-backs and the advanced midfielders to the wide areas. Also, wingers like Willian, Callum Hudson-Odoi and Christian Pulisic had the ability to take on the defenders to cross. Therefore, the task of Abraham was to stay at the centre for the cross.

In such a case, when Chelsea attacked the flanks, the opposition defenders inevitably moved to the wide areas. Usually, the gap appeared between the centre-backs. Abraham liked to attack those spaces to meet the cross. The 22-year-old only showed up at the last moment to meet the cross, as he stayed at the blindside of the far side centre-back initially. If he positioned himself between the defenders too early,  his presence would be visible and easy to mark. 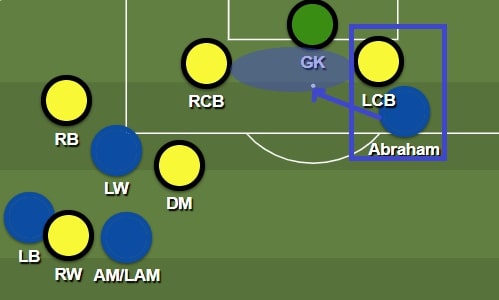 The below situation is an example. In this case, Chelsea tried to penetrate through the centre with Tariq Lamptey’s progressive run. Abraham stayed around Callum Chambers initially, reading the spaces behind David Luiz. He quickly made a diagonal run to exploit those spaces and receive the pass from the right-back. Both Arsenal centre-backs were unaware of his run, hence, he was free to receive the ball in the box.

Apart from the above examples which demonstrate how Abraham attacked spaces between centre-backs, his movements also helped his team in open plays. As explained, Abraham kept himself centrally, so he was ready to attack spaces behind a high defensive line always.

In this scenario, Abraham used his pace to beat Ajax’s centre-back, Daley Blind with a run outlined by the blue arrow. Since the 22-year-old is young and quick, he was faster than the Dutchman. In this case, he had a 1 v 1 opportunity against the keeper thanks for his pace.

Despite creating a goal-scoring chance of 0.39 xG, there might have been a better run available to him than this one. In reality, Abraham tested André Onana under pressure, as Blind tracked his run. However, if Abraham chose a curved run as outlined in the white arrow, hypothetically, he could stay onside and on Blind’s blindside until the very last moment. Also, this run would have created room for a right-footed striker to shoot as well.

Abraham is also a forward player who is willing to provide unselfish runs for his teammates. Some of the Blues (e.g. Willian, Pulisic or Mateo Kovačić) like to carry the ball forward; in those situations, Abraham would try to run laterally or diagonally to bring away the defenders.

In this image, you can see Hudson-Odoi was carrying the ball forward. Abraham understood the 1 v 1 ability of the youngster, therefore, he ran inward to the centre. This run forced the centre-back, Jamaal Lascelles, to follow him. As a result, Hudson-Odoi can take on the wide defender alone.

Abraham also had his preferred movements in the box. As mentioned, he liked to stay at the far side centre-back’s far side, then exploit spaces between the defenders. In this scenario, Alonso attempted a cross. The 22-year-old stays behind Conor Coady initially, then, steps ahead to attack the ball before the Irishman.

When analyzing a striker, we have to mention his shooting. Abraham is gifted in this aspect. On some occasions, even if his body orientations are suboptimal, he has still managed to put the ball into the net. The number nine of Chelsea has a good sense of finishing when shooting a bouncing ball or a dropping ball.

This example was his first goal at Chelsea. In the game against Norwich City, Abraham scored within three minutes. As you can see below, despite the ball dropping, Abraham still managed to score with a first-time shot.

A minor flaw of Abraham’s shooting is his preparation before the ball arrives. When he is fit, he can score goals with suboptimal body orientations. However, sometimes this flaw still adversely affects the execution of Abraham’s ideas.

In this scenario, Abraham noticed Ederson’s positioning. The Brazilian was out of position. In this fast break, if the 22-year-old could loft the ball over Ederson, then it was likely to reach the top corner. The idea was right, however, when N’Golo Kanté passed him the ball, Abraham was still facing the touchline. Better body orientation would be to face the goal, which would give him a wider angle to generate the shot as he wished. Therefore, the idea was not executed perfectly, with the ball not even on target. 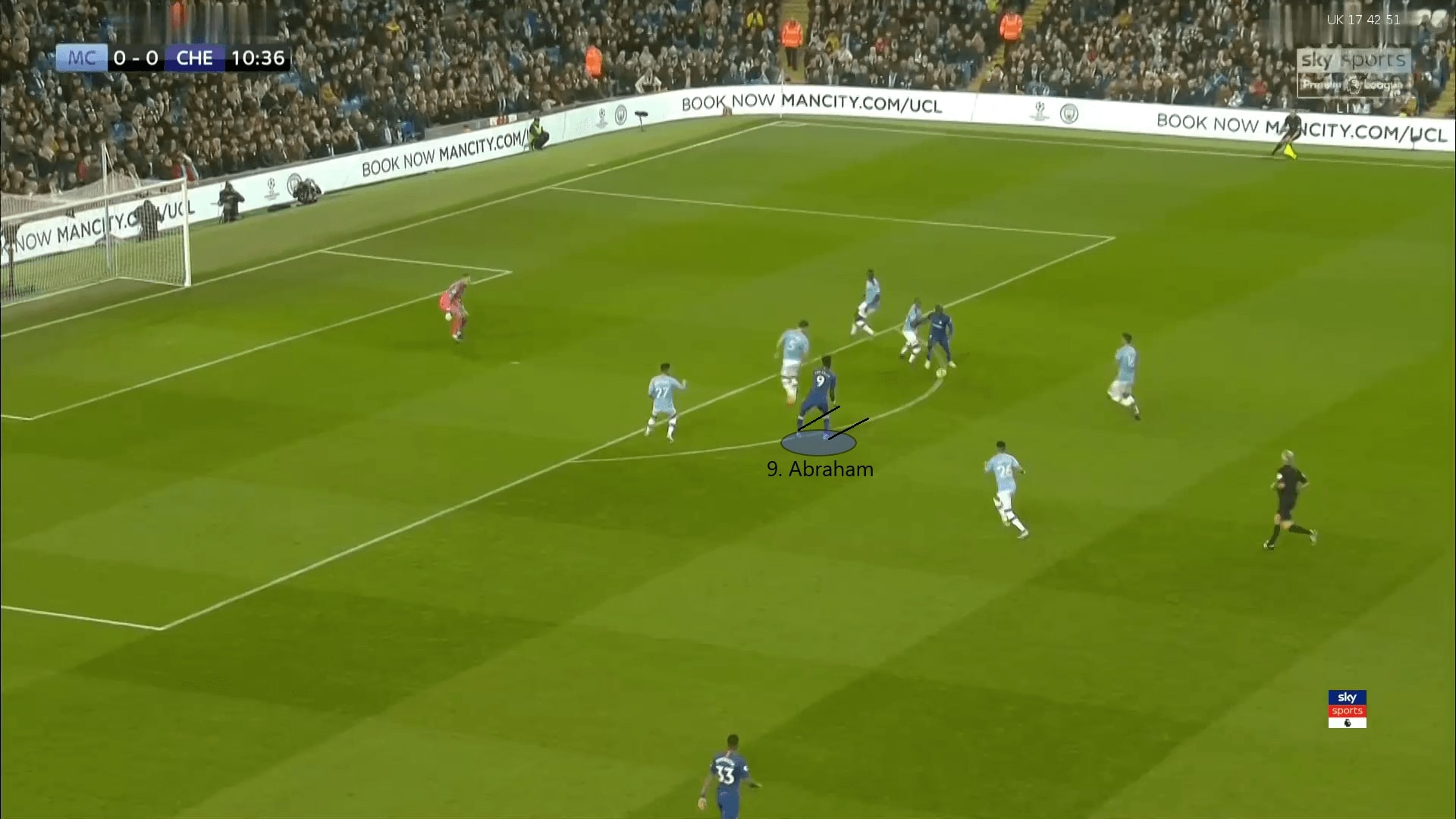 Some similar issues also exist in Abraham’s headers. He is too focused on the ball – if the ball is aimed right above his head, it is an easy header for him. However, if Abraham has to adjust his position to meet the cross, for example, with a dash to the front post, he is less likely to generate an optimal body shape for a shot.

In the last section of the analysis, we are going to explain the defensive duties of Abraham. The former Swansea striker had 2.58 recoveries, 1.99 interceptions and 1.1 clearances. Of course, Abraham is not a defensive forward, but he still had his job to do in these phases.

When Chelsea are pressing, winning the ball high up on the pitch was not their top priority. Forcing the attacking team to play long and letting the centre-backs take part in the duels are their primary aim. Therefore, Abraham does not need to win the ball high. Instead of pressing the ball, only shutting the passing lanes is enough. When covering a player, the priority is to prevent a switch of play.

In this scenario, Chelsea only committed Abraham and Willian to defend high. It was clearly a numerical deficit, so their job was to force Ajax to play long. Abraham’s role was to cover the switch of play passing lane between the central players, as indicated by the triangle below. As a result, Nicolás Tagliafico returned the ball to Onana, who played long as he lacked short solutions. 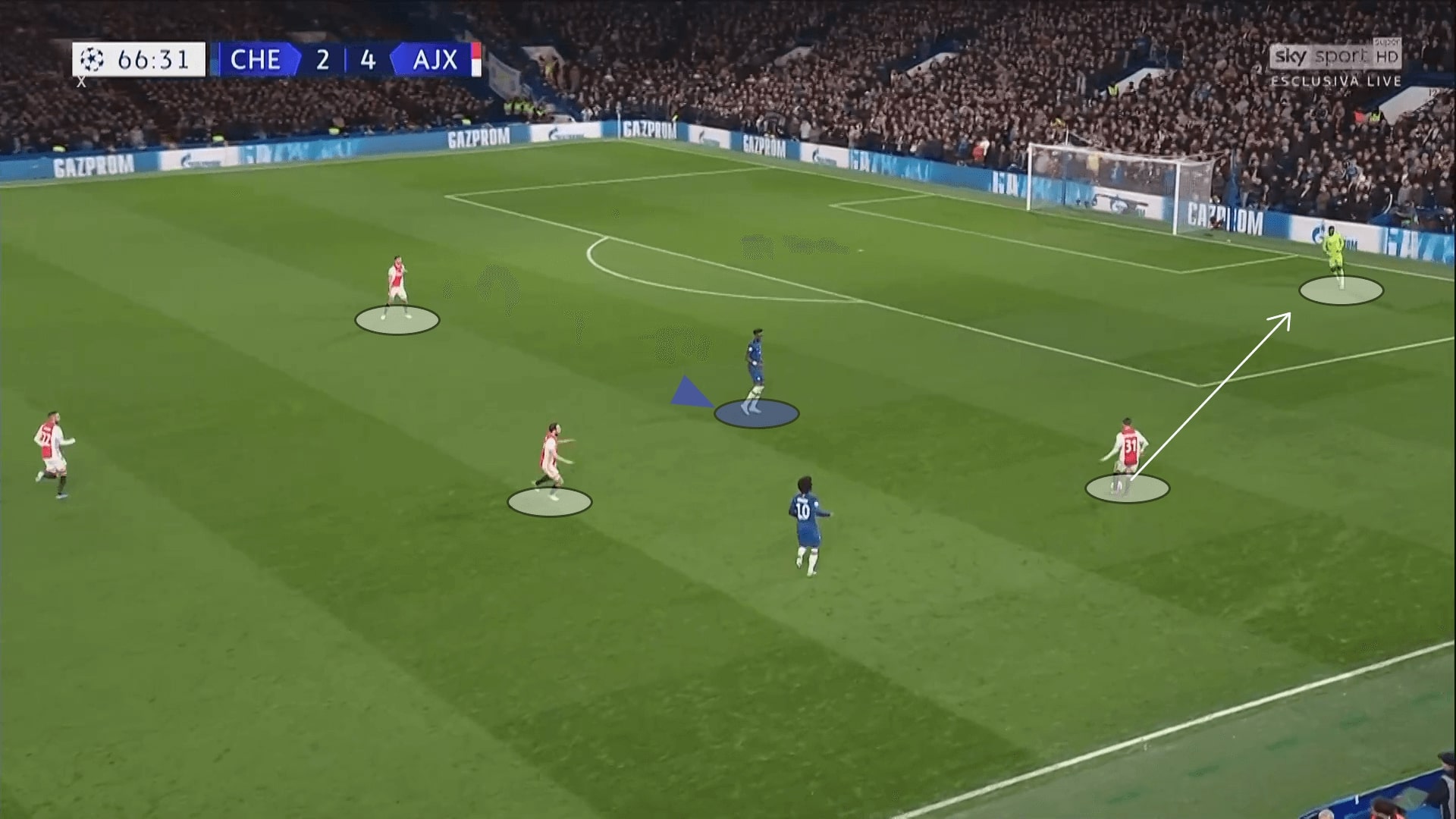 The circumstances were a bit similar in the defensive transitions. In this image, Wolves just regained possession, Rúben Neves was surrounded by the Chelsea players. Instead of approaching the Portuguese, Abraham only covered the deep options, Coady and Saïss. This forced Neves to play long and Chelsea won the ball back. 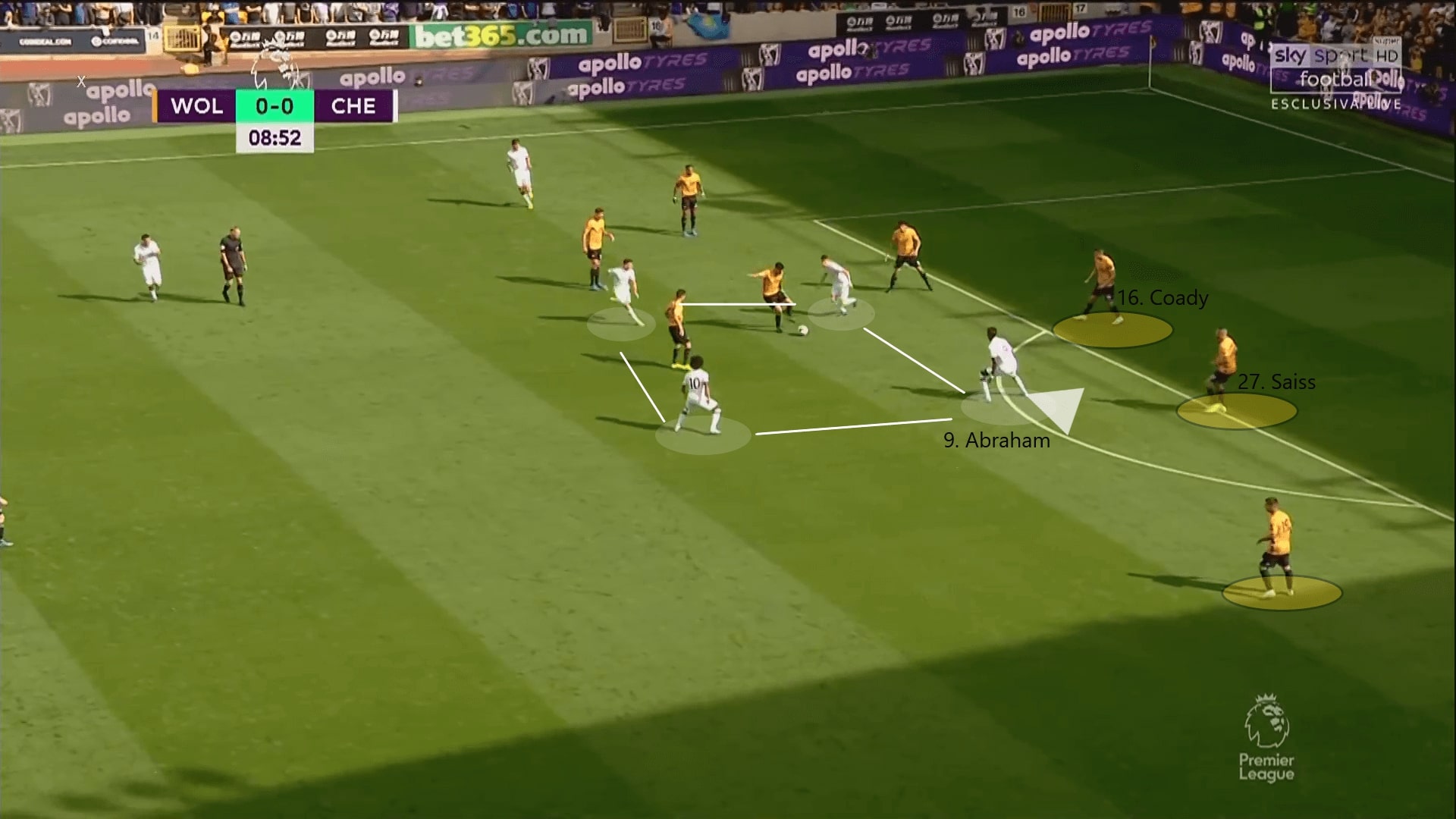 Lampard also tried to utilize the height of the 22-year-old when defending set-pieces, including the indirect freekicks and corners. Abraham was tasked to position himself at the front post to protect the zone, instead of marking an individual. Of course, the instruction was simple – clear any deliveries if possible.

In the following image, you can see Chelsea were defending a freekick and the position of Abraham. The English forward was not tasked to mark a target. 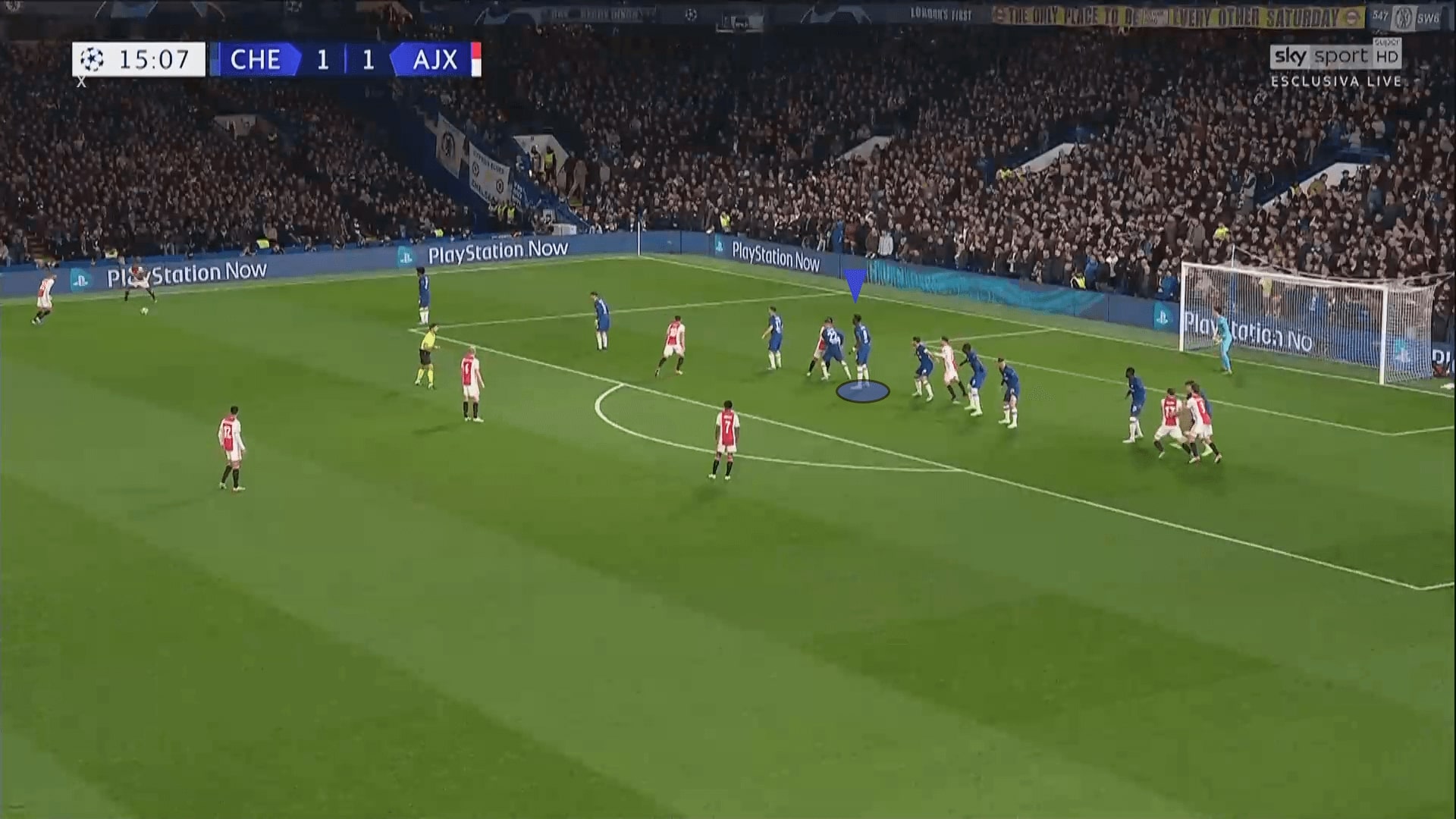 “He is a very good forward, with strong finishing skills, and good movement for his age.” – Luis Suárez

Abraham had a very strong start early this season. He was already one of the best young strikers in the world. As praised by Suárez, the 22-year-old was doing well in terms of movements and finishing at his age. His xG was 18.89, almost four more than his current goals (15). As mentioned, the details and executions of the ideas still has room for improvement, and he has the time to improve himself.