This week’s Premier League returned with a clash between Wolves and Leicester City on a Friday night. After 90 minutes, Brendan Rodgers’ team failed to secure the fourth win in the new calendar year. It was a tight game between the two, Nuno Espírito Santo’s defensive tactics were vital to keeping a clean sheet, which would be a key point of analysis.

In this tactical analysis, we will show you how Wolves drew with Leicester City.

For Wolves, they played in a 3-4-3 formation. Nuno slightly rotated the squad given there was a Europa League game in this week. Both João Moutinho and Adama Traoré were rested on the bench, with the new signing, Daniel Podence. Leander Dendoncker returned to the midfield and partnered with Rúben Neves; This was the first time of the season that Pedro Neto jointed Diogo Jota and Raúl Jiménez at the front line.

Leicester played in a 4-1-4-1 formation. Wilfred Ndidi’s absence gave Hamza Choudhury a chance to play as a sole pivot, in front of Jonny Evans and Çağlar Söyüncü. Jamie Vardy was looking to end his fifth consecutive game goal drought in the league.

In this analysis, we will pay much attention to the tactics of Wolves as they denied Leicester to play their own football. The solidity of Wolves’ this game could be attributed to their midblock.

To begin with, we simply illustrate the attacking shape of Leicester with the following image. Rodgers’ team liked to play out from the back, possessing a pair of attacking full-backs and creative midfielders (James Maddison & Youri Tielemans). In general, the shape was like a 4-3-3, with a wide player (Harvey Barnes on the left and Ricardo Pereira on the right) to provide the width. 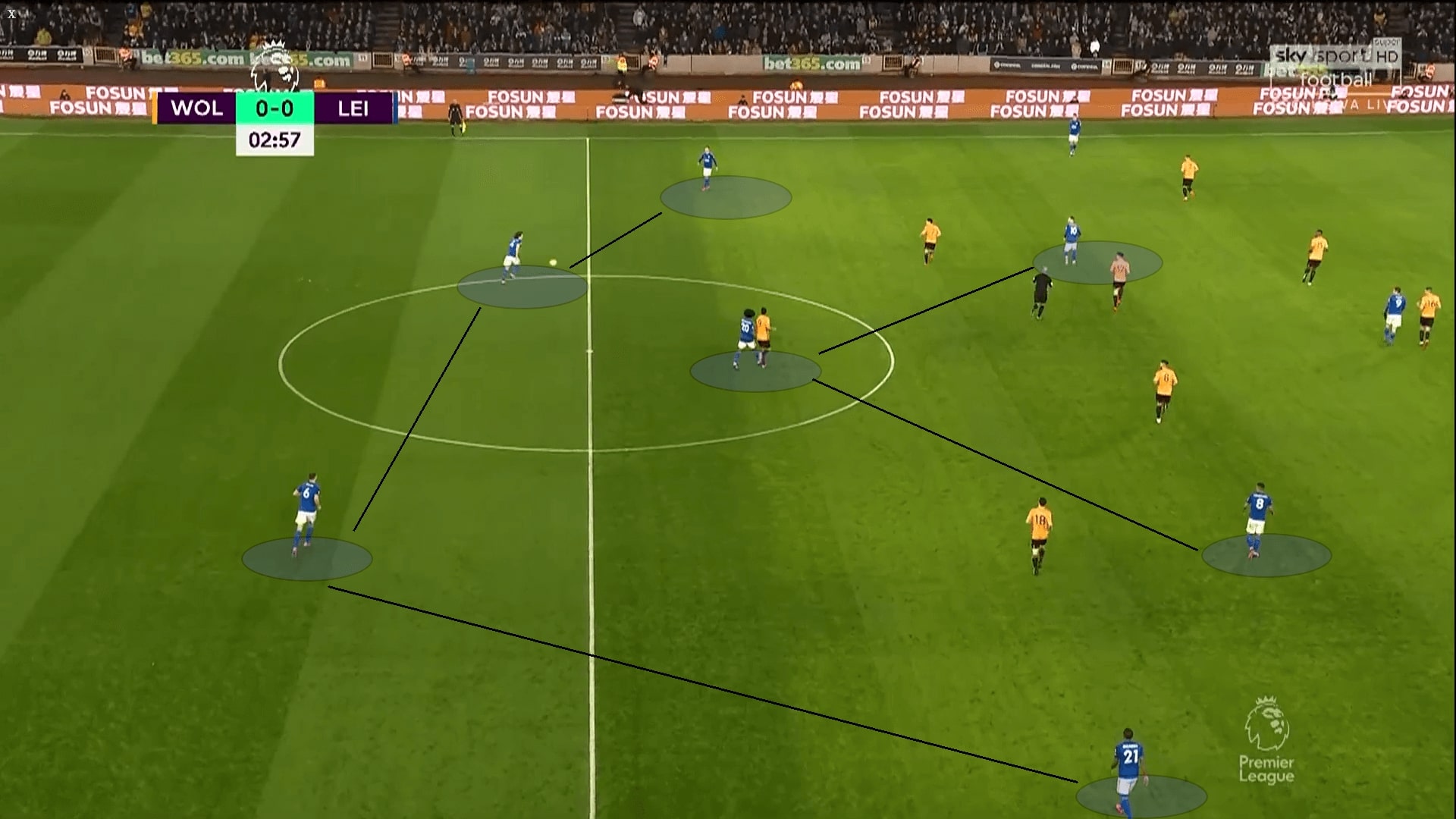 The brilliancy of Wolves’ midblock was their ability to manipulate where the ball was going to. We could briefly divide their defence into two segments.

As the ball-playing centre-backs, Evans and Söyüncü kept the ball under their feet and looked for a vertical pass to progress. Wolves’ denied the central penetration by a ‘pentagon-shaped’ midblock. This was formed by the midfielders and the front three, with five players staying compact at the centre.

This block was initially set around Choudhury, contained Tielemans and Maddison by reducing the accessible spaces for both to receive a pass. Usually, this could force Leicester to play the ball wide.

Mathematically, Wolves had five players at the centre, but Leicester only had three. In other words, Nuno’s team enjoyed a numerical superiority as well. 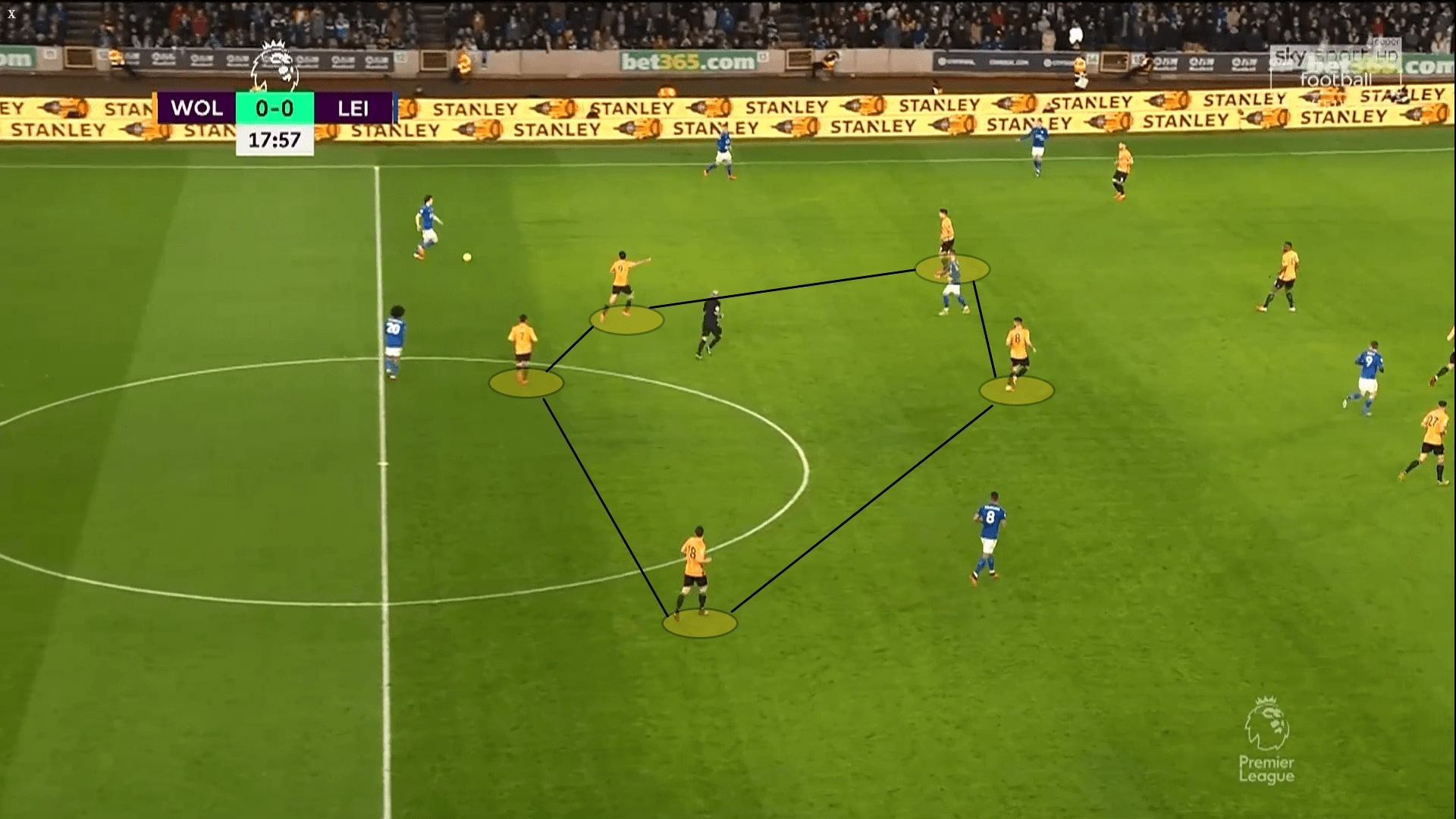 If Leicester were dared to play the ball at the centre, they had to take the risks that the pass would be intercepted. Wolves’ players were alert to a vertical pass, they managed to win the ball back high on a few occasions as the errors of the Foxes.

In this example, Wolves pressed high by pushing the front three forward. Under the pressure of Jiménez, Kasper Schmeichel passed vertically to Choudhury. This was not a very poor pass, but it was slightly light and off-target. However, Neto quickly intercepted the ball ahead of the Englishman, won the ball high in Leicester’s half. 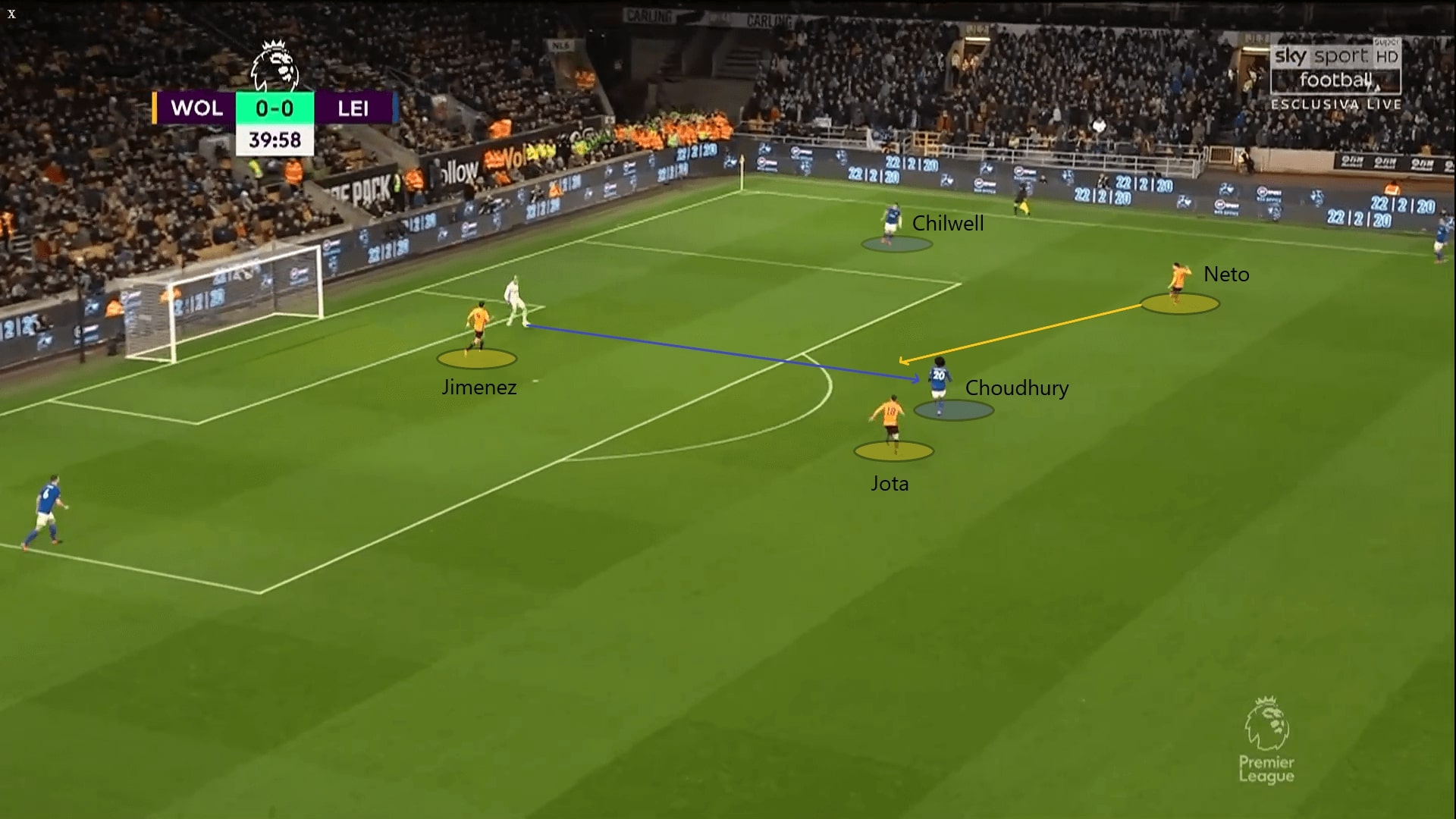 2.When the ball was at the wide areas

With midblock of Wolves, they also created a numerical advantage at both flanks, hence, they were pleased to let Leicester develop their attack wide. Since Leicester’s attacking midfielders (Maddison & Tielemans) tended to position themselves at the half-spaces, they only had two players at flanks.

For Wolves, they moved a midfielder, a winger and wingback, totally of three players to defend at a flank at least. Therefore, these three could compress the space at the wide areas from every angle, trapped the ball at sides and denied the further development of the attacks.

With this example (an attack of Leicester on the left), we illustrate how the defence worked. Neto came from a higher position, Matt Doherty defending from a deeper position, these two players were compressing the spaces. For Dendoncker, his position was also vital as he covered Maddison. Of course, in case Leicester really broke the trap with an unexpected pass, Wolves’ still had another midfielder (Neves) to respond and defend. 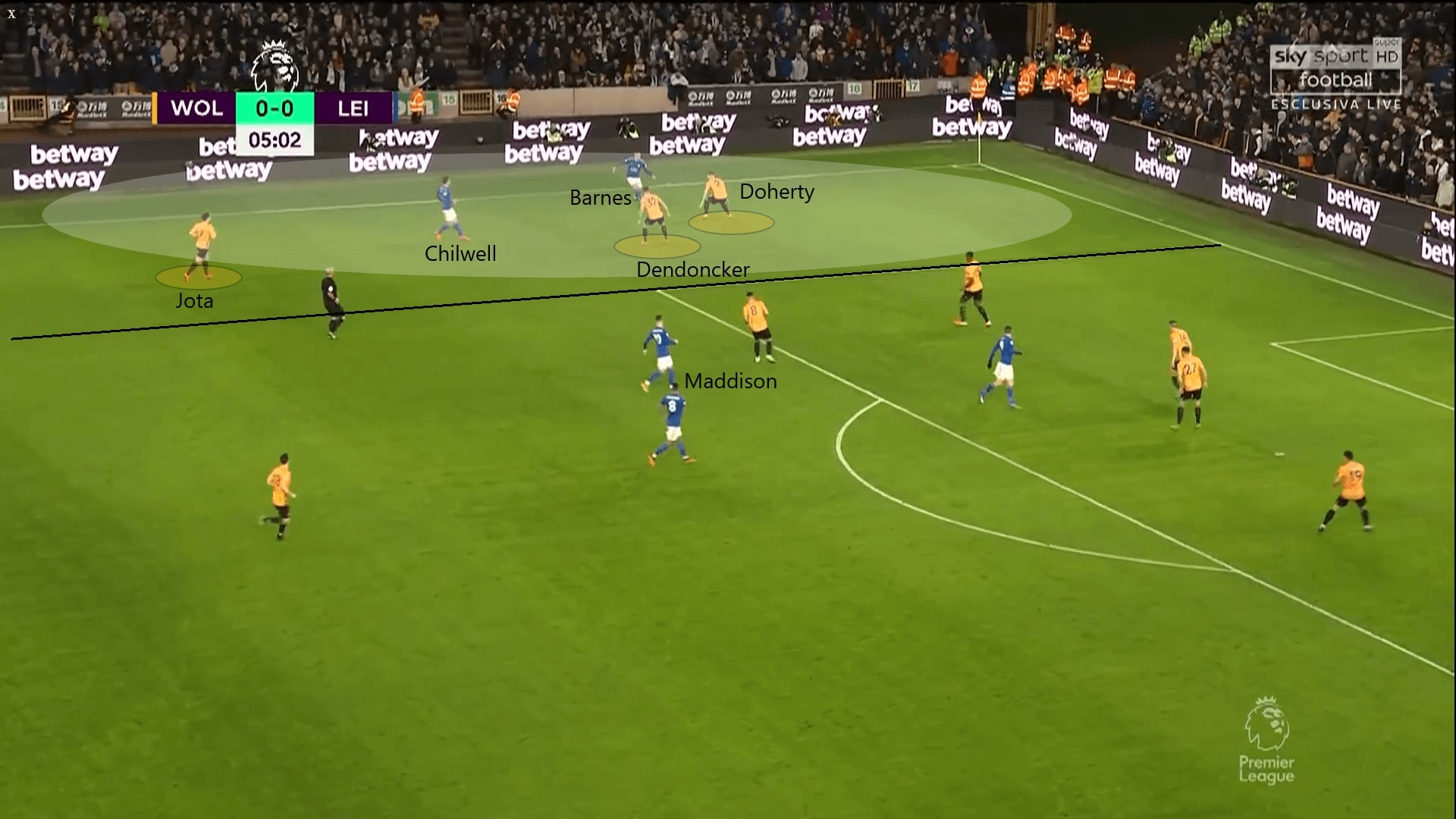 On the other flank, the defence worked in the same way. This time, Leicester attacked with Pereira and Ayoze Peréz on the right flank. Again, Maddison stayed at the half-spaces.

This time, Wolves shuffled the players on the other side to deny the attack. The left-winger (Jota), left central midfielder (Neves) and left wingback (Jonny Otto) denied the development of this attack. Again, they blocked the central access while trapping the ball at side, as Neves covered Maddison and Wolves enjoyed a numerical advantage here. 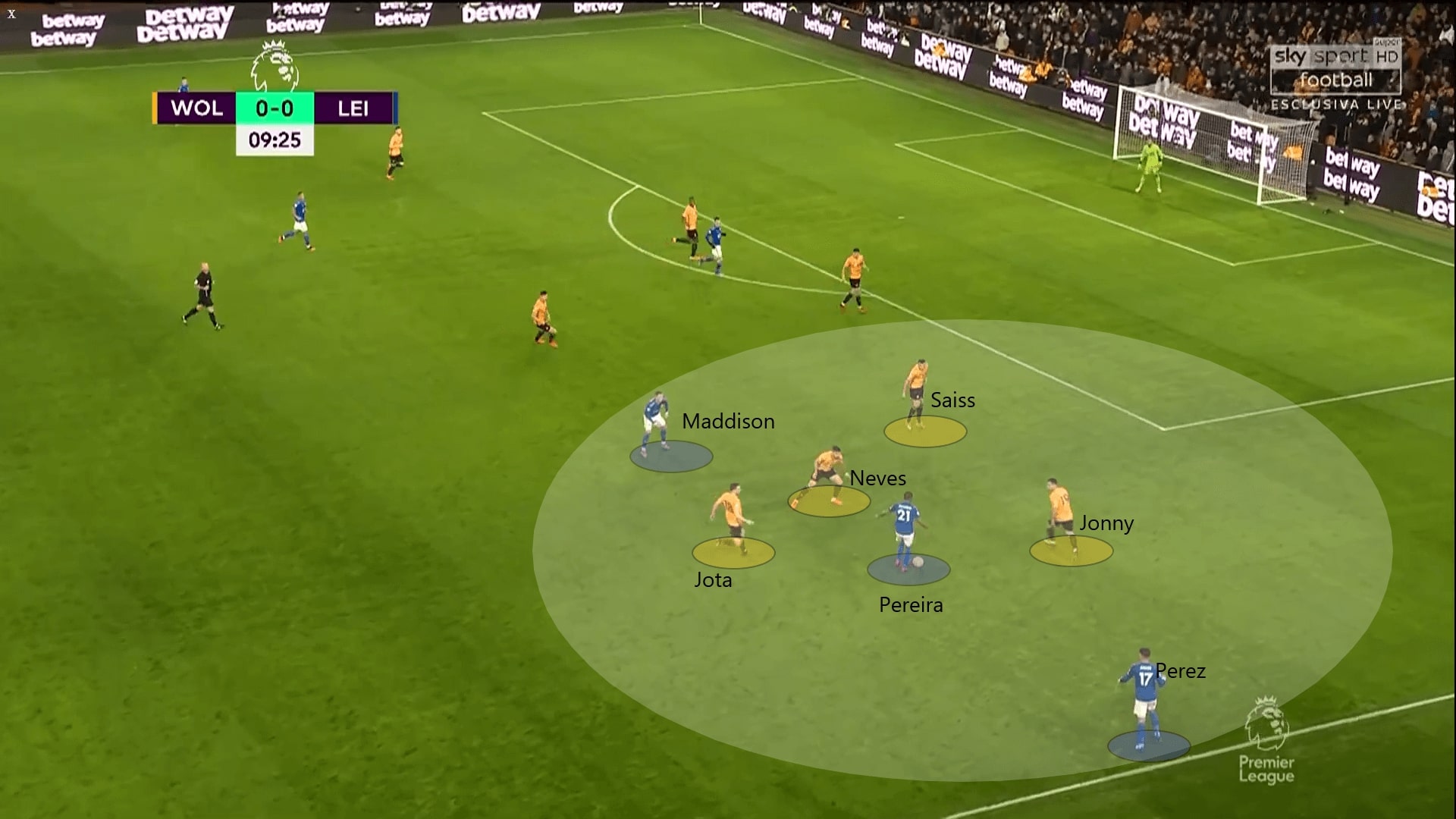 So, what if an advanced midfielder of Leicester stayed wider to increase the number at flanks, would it reach numerical equality? The answer was NO. Given to the back five of Wolves, they had the flexibility to allow the centre-backs to step out and maintaining a sufficient number at the centre.

Therefore, if Maddison went wider, Wolves would respond by moving a wide centre-back to that zone, which was Romain Saïss in this case. As illustrated by the black lines, Leicester formed a passing triangle. However, Wolves still possessed the numerical superiority, with Saïss stepping up, it was a four v three situation here.

Of course, this denied the attack of Leicester. Furthermore, this setup ‘caged’ Maddison, with four players around him. Pereira tried to pass to the 23-year-old, but it was intercepted. 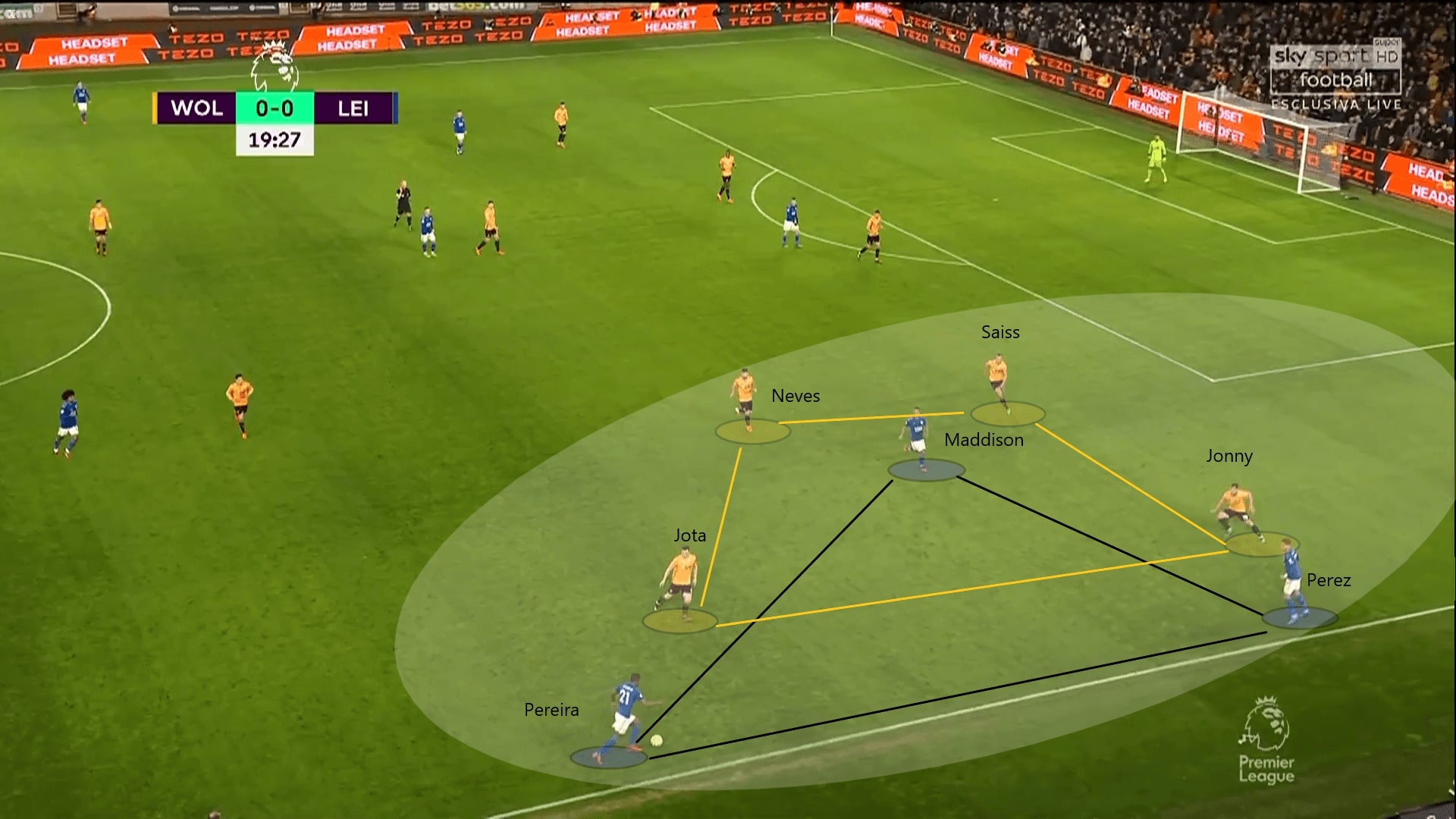 Rodgers did not have many methods to break the defence of Wolves. After the break, a small change was the positioning of Maddison, as he would drop deeper to add an extra man at the midfield. Also, the dropping movement would help him to get rid of the marker. With this, Leicester could better distribute the ball at the centre and develop the attack, as Maddison’s presence provided another outlet apart from Choudhury.

This change did not trouble Wolves at all, as they stuck with their game plan. After Maddison dropped deep to spread the ball, he was late to join the attack in the final third. With the deep position of Tielemans, Leicester still suffered from a numerical deficit.

As demonstrated below, after he played the ball wide, he was still at the central third, while Pereira and Peréz were trapped by four Wolves players on the right flank. Pereira tried to find Vardy, who was surrounded by two players. Apparently, the pass was unsuccess. 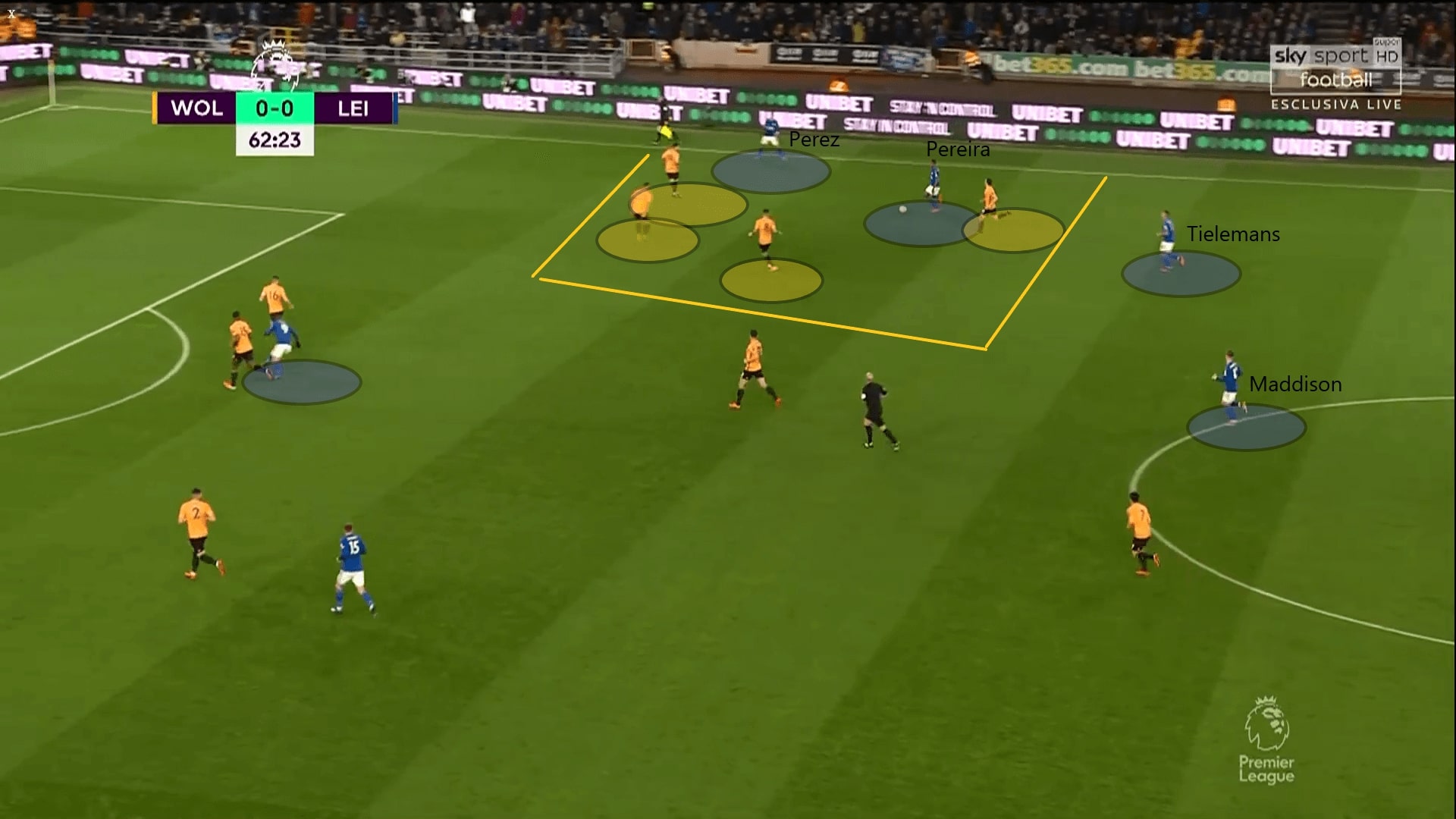 Wolves tried to boost the attack

For Wolves, they attacked sharply in this game, they had an xG of 1.46 throughout 90 minutes. As reflected in the below xG dynamic graph, Wolves boosted the attack right after Choudhury was sent off.

In this game, they did well to stretch the pitch as big as possible with the wingbacks (Jonny and Doherty). This allowed Neto and Jota to stayed at the half-spaces, closer to the goal. It was a clever setup as the wingers were better in terms of attacking the goal, therefore, they should be kept at the centre.

As demonstrated in the below image, Jonny and Doherty stayed wide to provide the width. Wolves’ players were spreading evenly on the pitch to occupy different vertical zones in the attack. As shown below, they occupied four vertical zones and tried to overload one of them (the far left). This allowed them to play quick combinations quickly, capitalizing the close positionings of the players.

On other occasions, Jiménez would drop and receive the ball, then quickly shifting the ball cross field. It switched the attacking focus in an instant, which allowed Wolves to access the final-third quickly on the weak side. 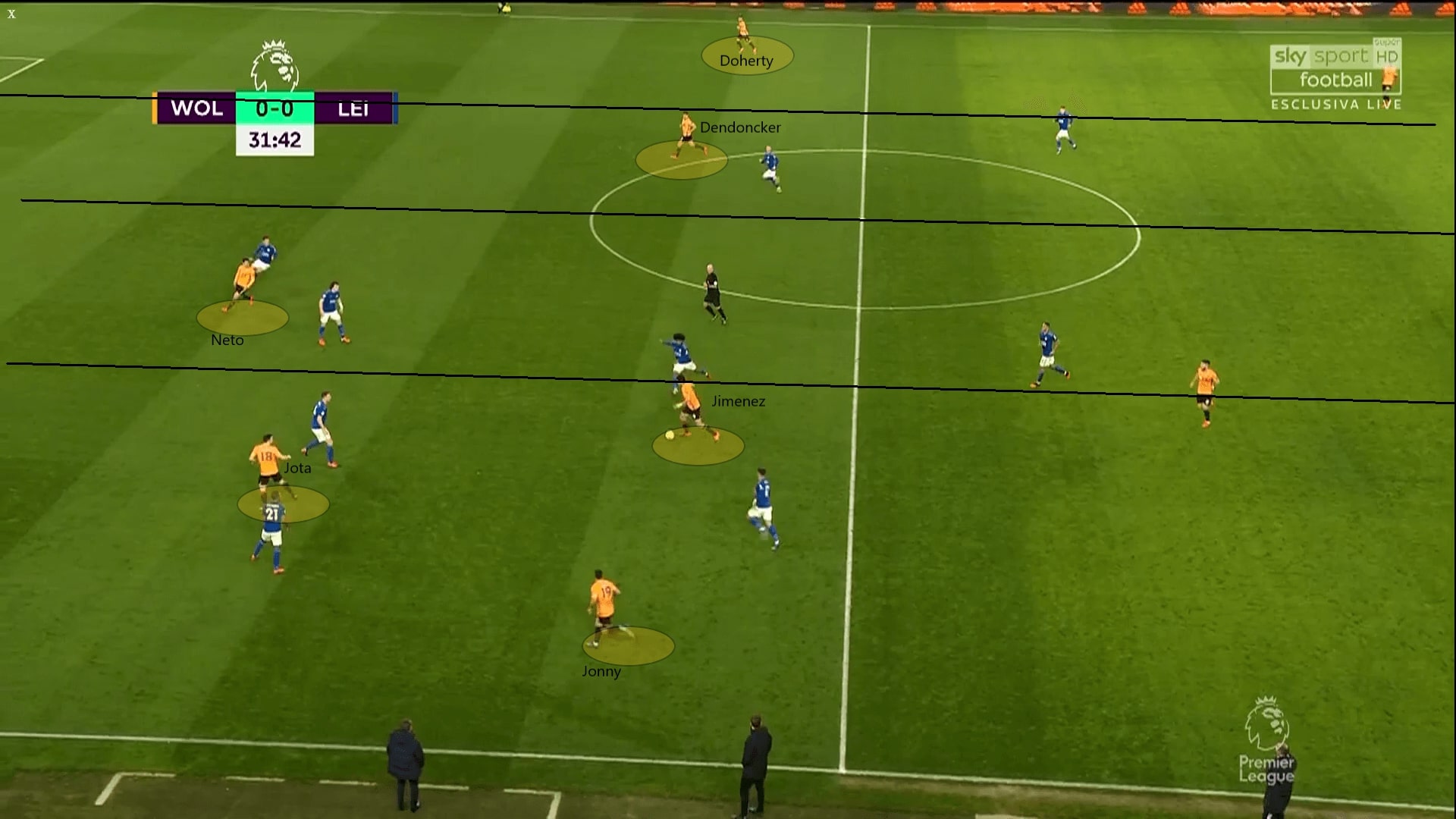 As the game went on, Nuno wanted a win, he tried to boost the attack by playing Traoré and Podence on. The Spaniard became a huge threat of Leicester’s defence after he came on. Statistically, he handed eight crosses, 14 dribbles, won 11 out of 20 offensive duels, five progressive runs, also drew two fouls.

He was a constant threat as Ben Chilwell failed to deal with him in one v one situations. Traoré’s teammates found him by playing long on most occasions, then, it became the time for the Spaniard to take on multiple players and shift some crosses in.

As Rodgers said, his team fought hard for a draw. The defensive contributions of the midfielders were vital, as they also retreated deep to defend the cross. Usually, the defensive line of Leicester was set around the six-yard box when defending the crosses, then, it fell to Choudhury and his partners to cover the remaining areas. In this case, it was Choudhury to clear the cross. 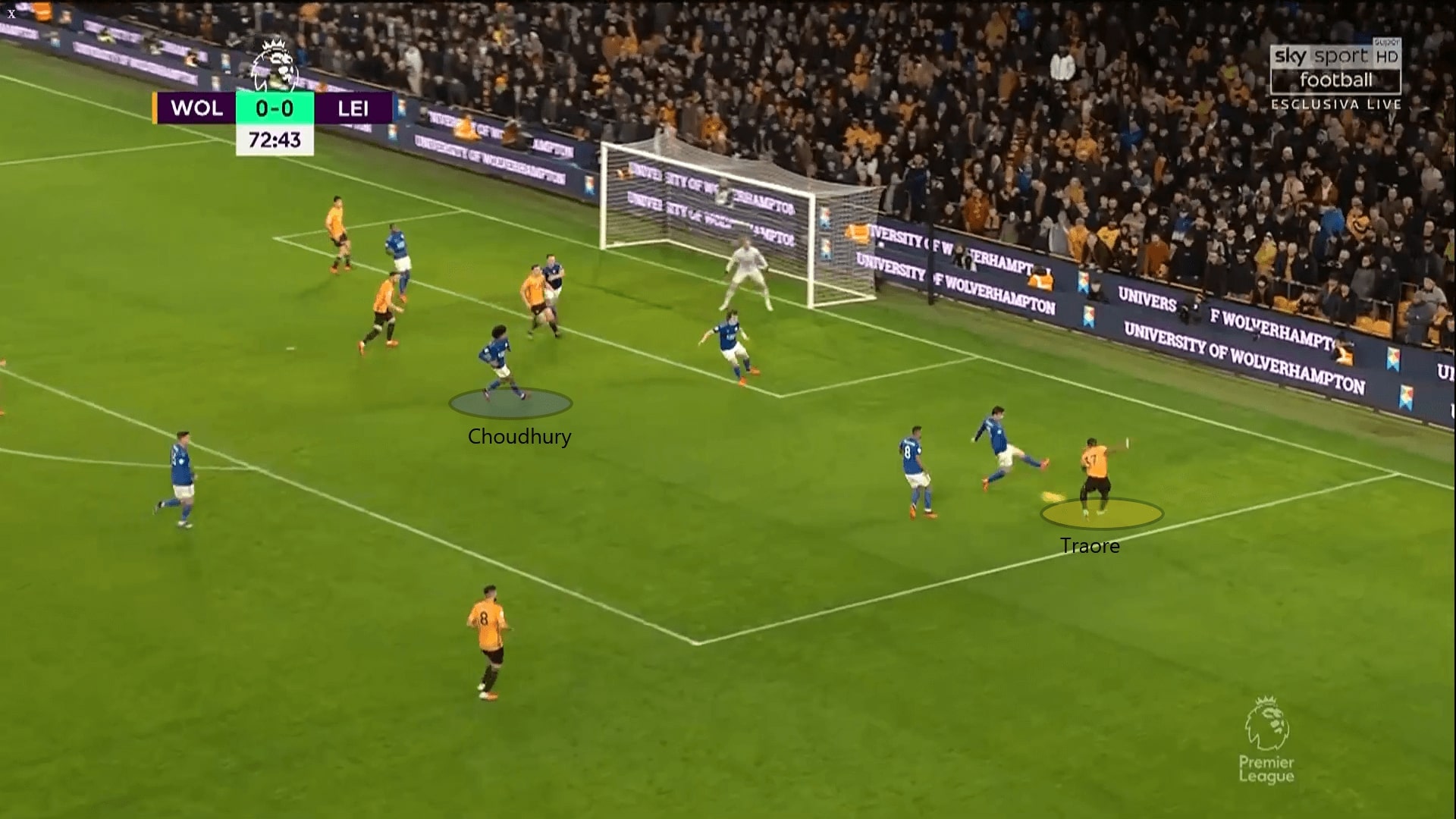 After Choudhury was sent off, Leicester defended in a 4-4-1 but this did not affect the plan of Wolves’ attack. Apart from Traoré, Jiménez was another player to serve as a target to receive the long ball.

His good control of the ball allowed Wolves to attack with the long balls. In this situation, Saïss played long to find Jiménez. The Mexican used his chest to release the third man: Podence to further progress the attack. 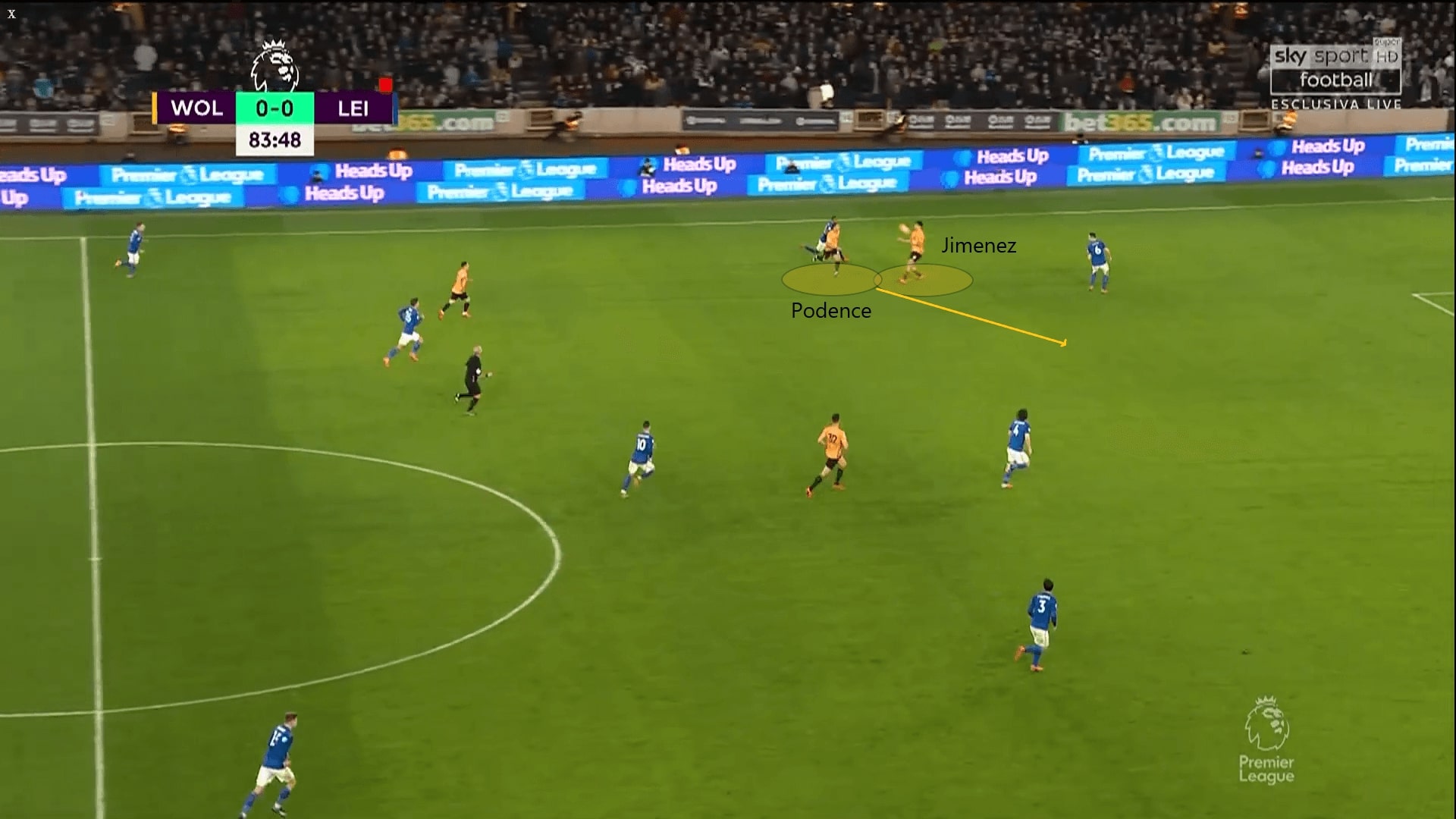 Wolves tried to attack in different ways when given the set-pieces to play. We focus on one of the reoccurring patterns that targeted the weakness of Leicester’s defence, which are from the left corners.

For Leicester, they defended the corners with a mix of man-marking and zonal defending. At the front post, they man-marked the Wolves players; Chilwell and Söyüncü were tasked to guard the far post, which was defending zonally and became Wolves’ focus of the attack.

Nuno’s men identified the far post area as the point of attack. In the first image, we saw Willy Boly and Dendoncker positioning at the far side, unmarked. Totally, there were two players attacking that zone. The delivery from Neto, a left-footed player was an out-swinging corner, hence, increased the distance and difficulties for Söyüncü to reach it early. It gave Boly the chance to head the ball, but his starting point was slightly too close and flat to the ball and hardly could he generate enough power. 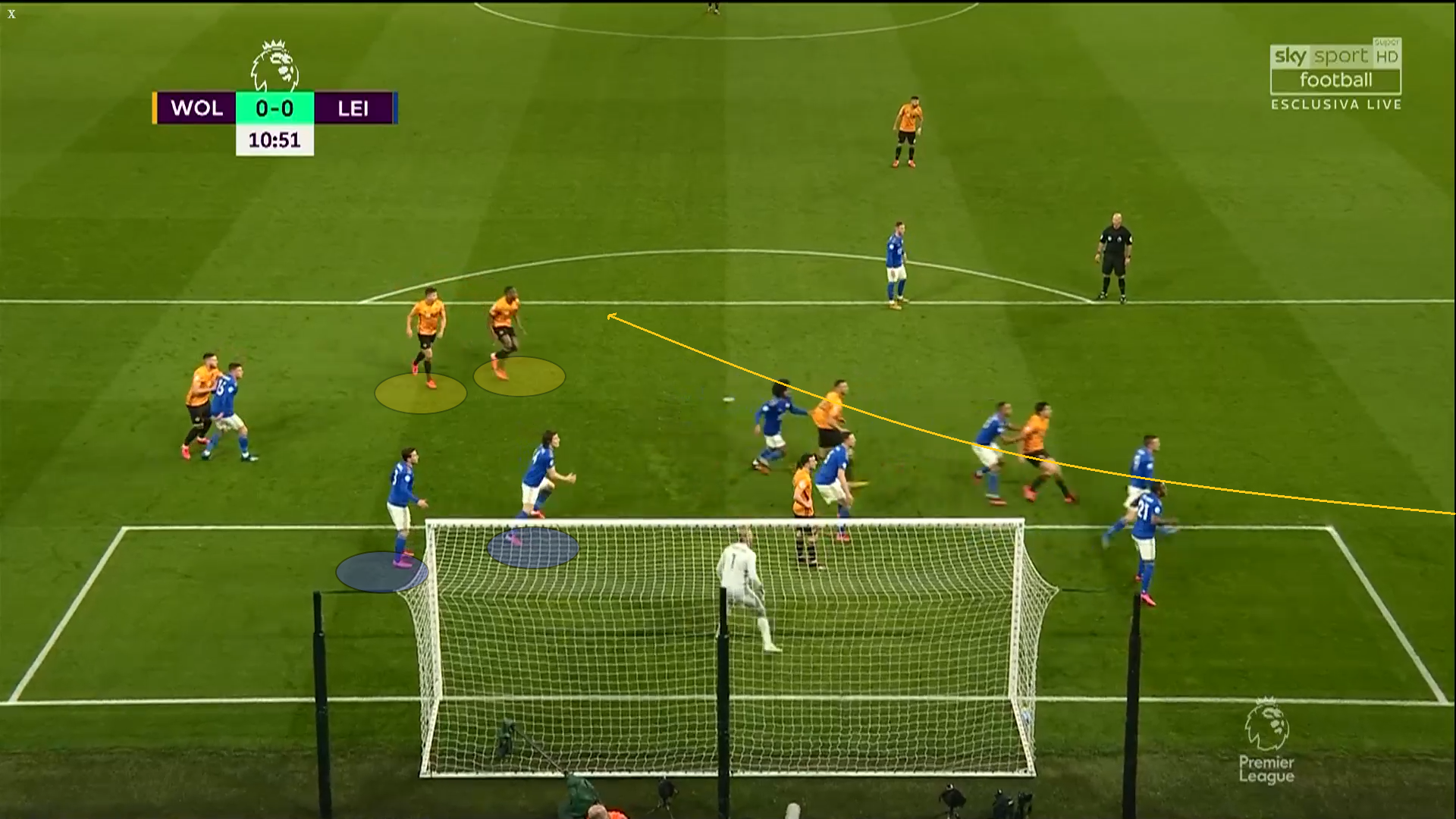 For another example, it was at the ending stages of the game. Wolves used a slightly different approach to attack, but the key element remained the same. Their front post players moved to the far post, leaving only Saïss there. It also drew the man-marking Leicester defenders to the far post. However, Dendoncker, Boly and Jiménez still created a three v two situation.

Again, they attempted the area between Chilwell and Söyüncü. The delivery of Moutinho was an in-swinging one with higher pace, which reached the target earlier and prevented the defenders from reacting. This time, the Dendoncker, Boly and Jiménez made some wicked fake movements before the kick to confuse the markers. As a result, the Mexican was free to head the ball between Söyüncü and Chilwell but he just could not direct it to the goal. 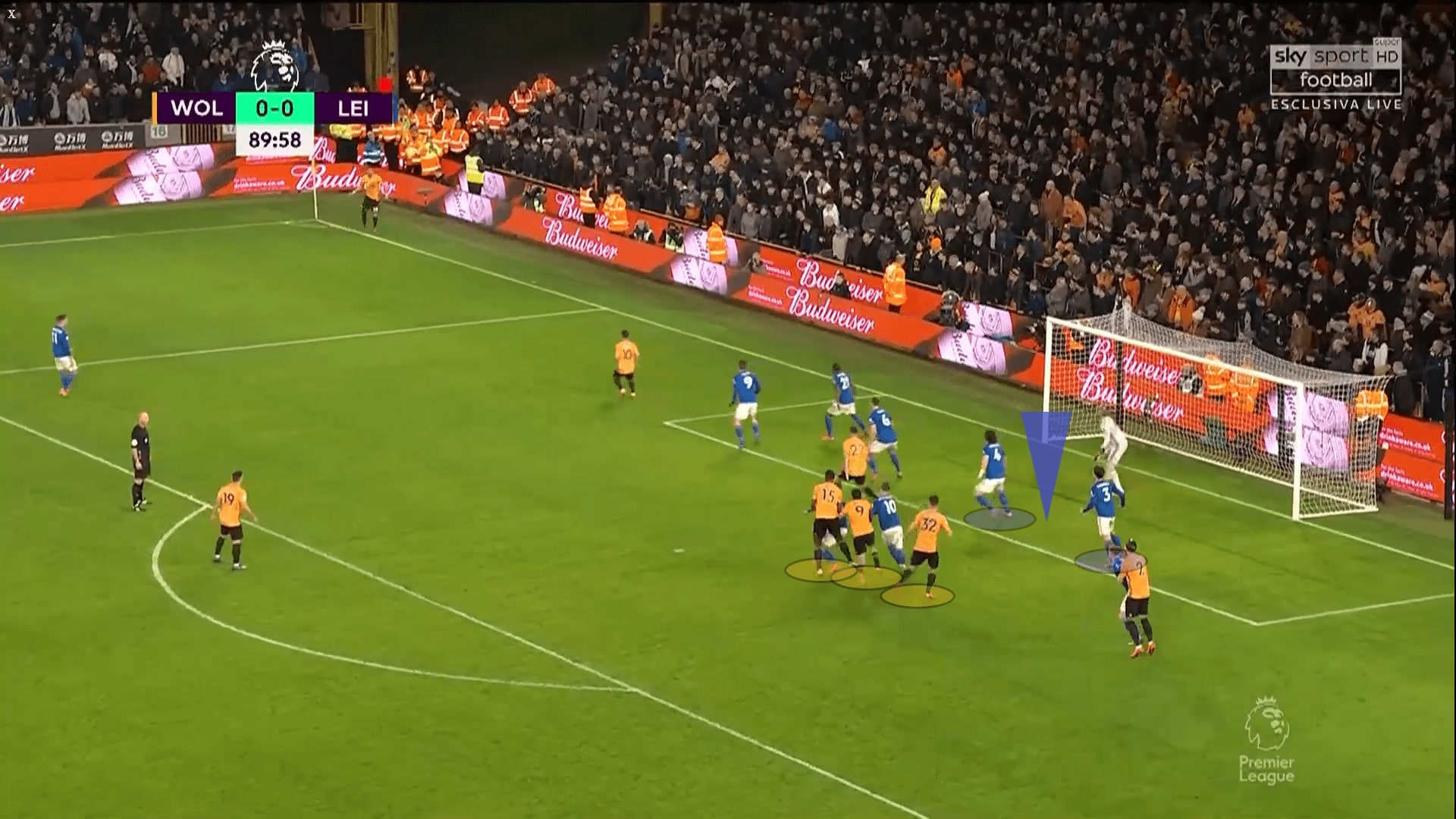 To conclude, Wolves were the better side of this game, they had the game in control. They limited Leicester’s attack, Rodgers’ team only had 0.46 xG and seven shots, which much lower than their season average 1.69 and 14. We thought Nuno got what he wanted, even the Portuguese rotated the team, he still got a point from the third of the league. The two rested players should be returning in the Europa League game.

Leicester did not have ways to break the midblock of Wolves, it was slightly weird to say a team who had possession was passive. In fact, it was the reflection of their game, they were guided by Wolves and unable to move it freely on the pitch. However, this was unlikely to happen in the next game, as they were playing Manchester City.