Manchester United kicked off their FAWSL season with a convincing 2-0 win against Reading Women at Leigh Sports Village to be at the top of the standings along with Manchester City, Brighton, Aston Villa, Tottenham and Arsenal who beat Chelsea as well in an entertaining game.

In this tactical analysis article, the analysis will include an extensive account of what happened in this game while focusing on Reading’s defensive performance and Manchester United attacking efficiency while analysing the team’s goals’ actions and their in-game tactics.

Manchester United played according to the 4-2-3-1 formation relying on Mary Earps as a goalkeeper, Hannah Blundell, Aoife Mannion, Maria Thorisdottir and Ona Batlle in defence, Katie Zelem and Vilde Bøe Risa as central midfielders, Kirsty Hanson and Leah Galton as wingers with Lucy Staniforth as an advanced playmaker behind Ella Toone who played as a false nine.

On the other side, Reading started with the 4-2-3-1 as well with Grace Moloney as a goalkeeper, Faye Bryson, Deanna Cooper, Gemma Evans and Lily Woodham in defence, Rachel Rowe and Chloe Peplow as central midfielders with both Amalie Eikeland and Natasha Harding as wingers and Brooke Chaplen as an advanced playmaker behind the striker Emma Harries. 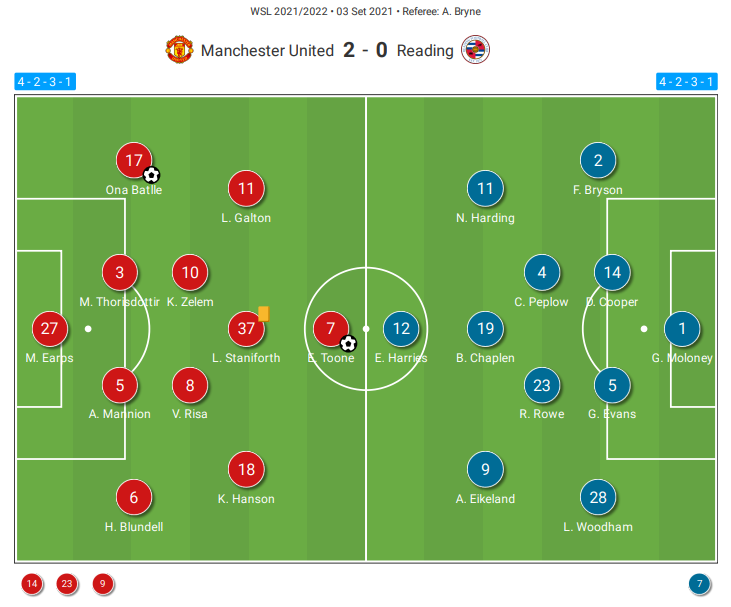 Manchester United started this match with a slow rhythm as they were chased a lot in their own half by Reading players who were so active in the non-possession phase. This enabled Reading to alleviate Manchester United’s playmaking efficiency and avoid allowing them to reach the final third easily.
As you can see below, Reading’s midfield and attacking players were constantly pressing high on their opponents as soon as the goalkeeper touched the ball to start the build-up from the back. 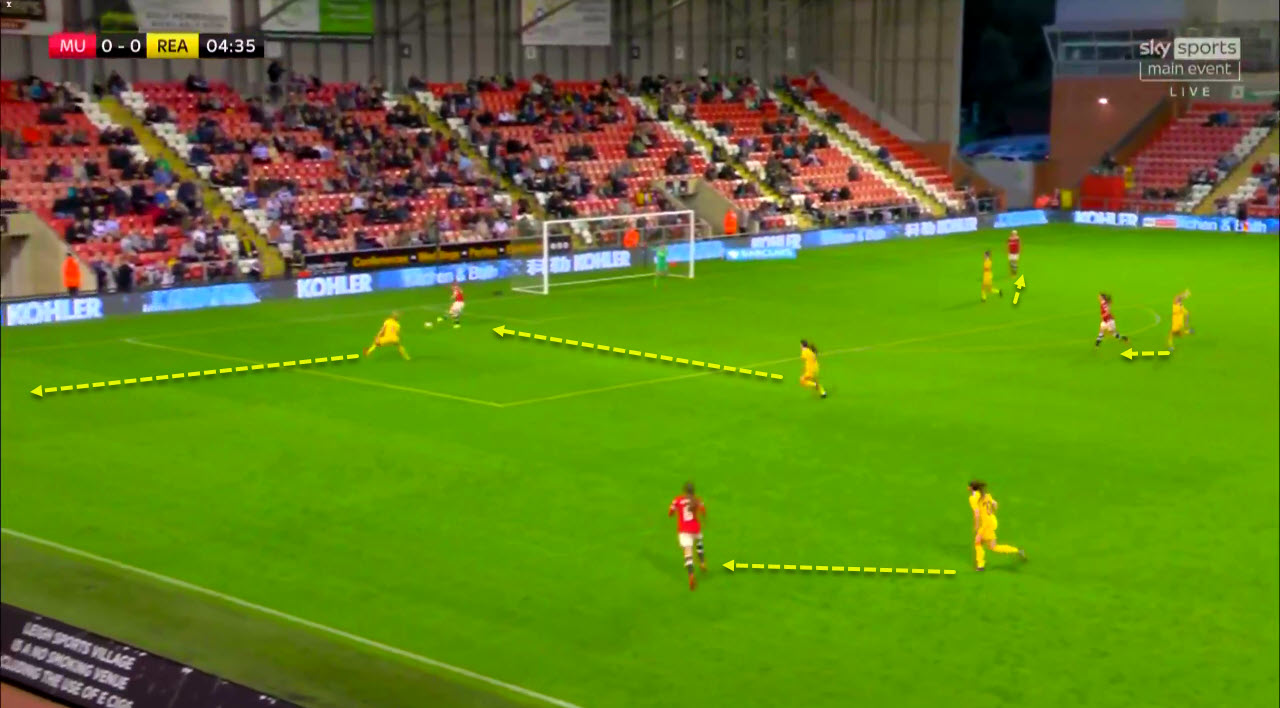 In general, this approach was successful for Reading as we didn’t notice numerous attacks for Manchester United, especially during the first half. And what made it even more useful was the quick retreat of almost all Reading players to defend as soon as they see Manchester United exceeding the first line of pressing.
At the same time, this solid defending obliged Manchester United to keep circulating the ball and look for overlaps, individual penetrations or rely on crosses from the wings when it’s possible. This gave Reading the possibility of having possession of the ball more often than expected and they tried to exploit that by attempting shots from long-range as soon as they reached the final third. But unfortunately for them, their shots went a bit away from the goal. 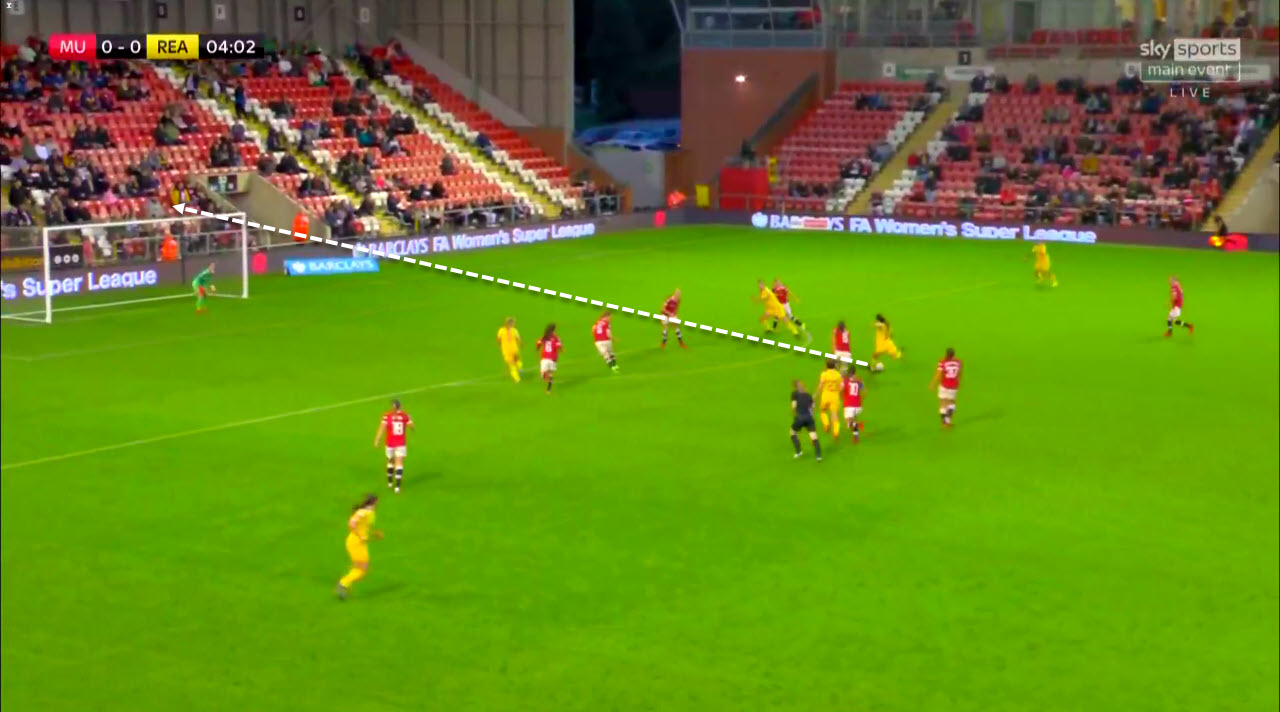 In fact, one of Reading’s shots actually hit the crossbar and went away following Chaplen’s solo effort, denying the team a goal that could have turned the game upside down. Reading relied on such shots from distance to confuse Earps and get back in the game. However, Manchester United’s defence were excellent in not letting Reading attackers advance a lot or reach the penalty box so often. At the same time, Reading’s attacking players will need to be much more aggressive in duels if they’d like to create tangible danger in the final third. Moreover, improving the accuracy of the last passes would help them a lot in creating more scoring chances especially against teams who defend well like Manchester United. 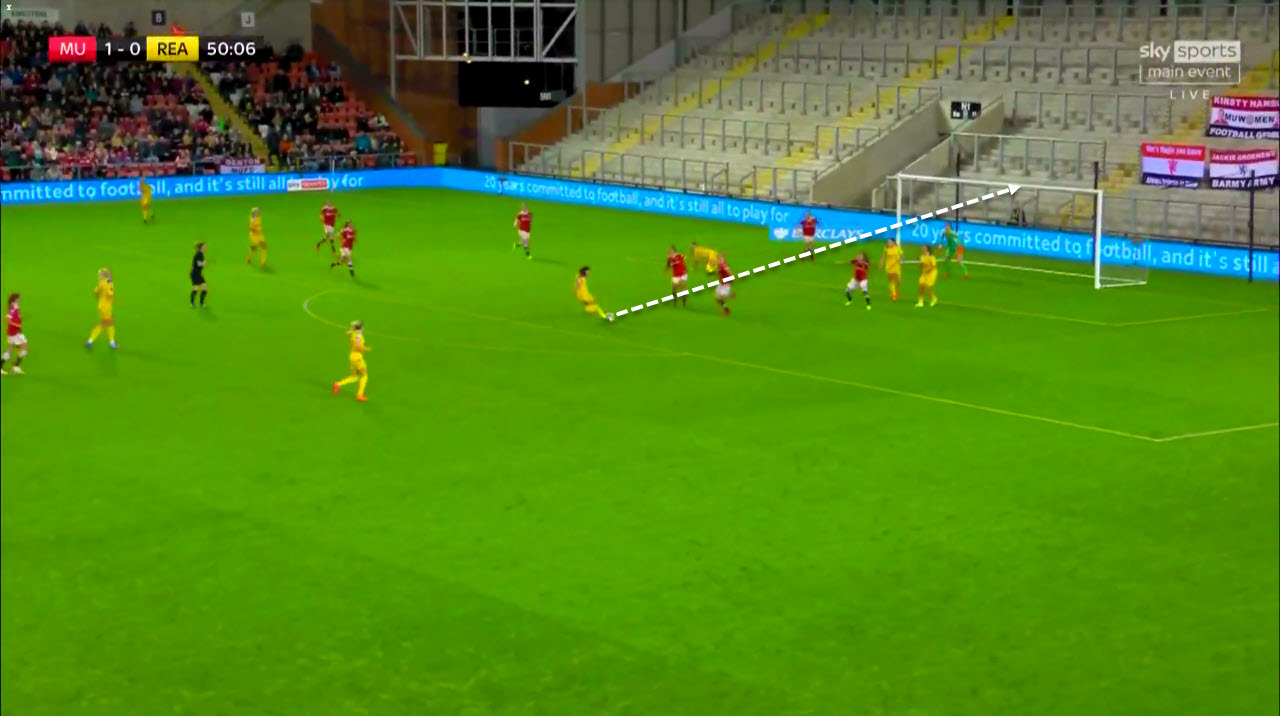 Marc Skinner’s first match ended with a deserved win thanks to two well-played goal actions. the Red Devils started the match cautiously and didn’t try to risk by preferring to build-up from the back despite the continuous pressing and reach midfield and attack through the wings or also by relying on Toone’s off the ball movements. Toone was at the centre of most of her team’s actions as she was the player who linked between Galton, Hanson and Staniforth even though she played upfront as a false nine.
Being a midfielder by nature helped her move a lot without the ball and retreat to provide space for those who are coming from the back like Hanson, Galton, Staniforth and also Risa and Zelem. This playing style helped the team confuse Reading’s defence on many occasions especially in the goal actions since Toone retreated to act like an advanced playmaker (her natural role) and provide passes to the others who took her spot. This prevented Reading’s centre-backs from having a striker to mark. Instead of that, they didn’t know who will fill Toone’s spot and who to mark when Manchester United are attacking.
You can see below how Toone’s pass towards Hanson allowed the latter to be in a perfect position behind the two defenders, which proves what we mentioned earlier about Toone’s movements off the ball and its importance in Manchester United’s attacks. Moreover, her excellent passing in this action deserves the praise as it was well-timed and so accurate. At the same time, Hanson’s excellent first-time finish gave the advantage to her team and allowed them to play without too much stress from an attacking perspective. 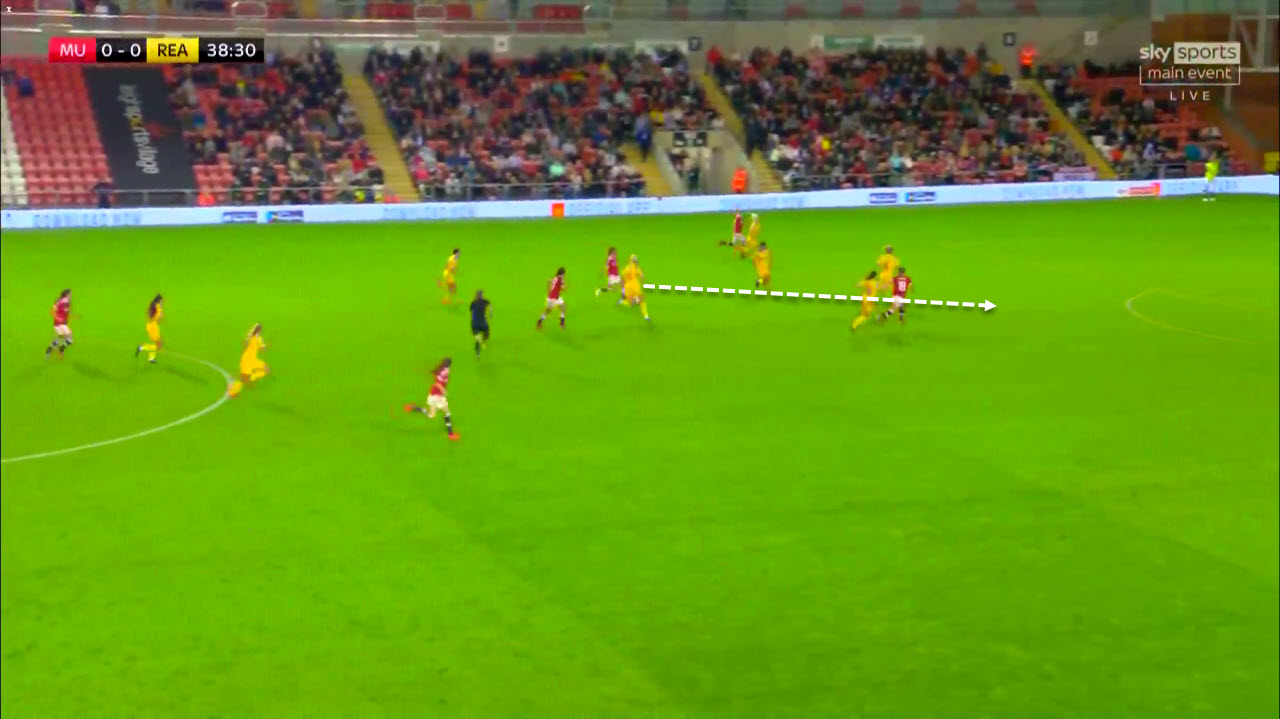 Almost the same situation occurred in the second-goal action with Toone retreating to receive the ball a bit on the left side of the final third and provide an excellent through pass to Batlle who found free space in front of her and exploited it by shooting on target with great power and precision to score the second-goal and the last goal of the match, giving her team a well-deserved win even though there are many aspects to improve ahead of bigger encounters. 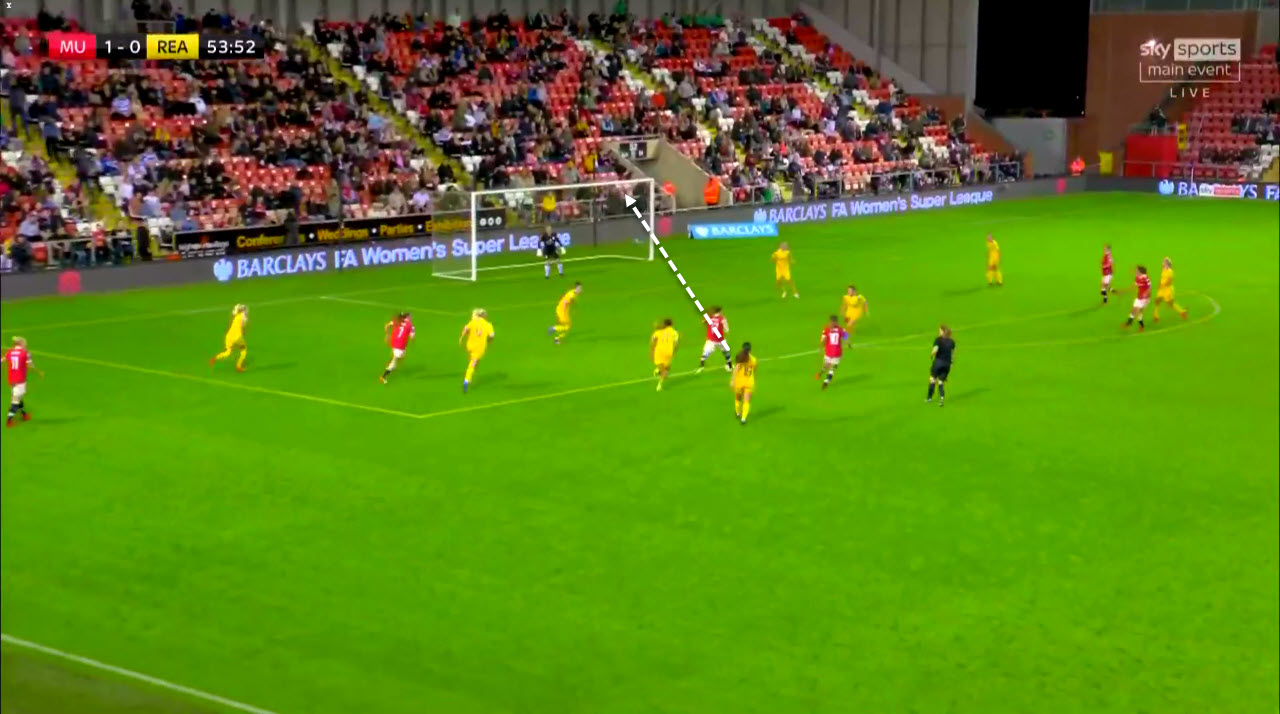 Manchester United have the right to be happy about their first win of the season but at the same time they should focus on improving their attacking performances and practice on multiple attacking plans in order to avoid being predictable against tougher teams who defend better than Reading. But for a first match, the team’s performance looked promising and Marc Skinner will surely aim at improving many things.

Manchester United won their first match of the season while showing some promising signs for the rest of the season following a lot of issues that occurred after the departure of Casey Stoney.
The team now looks solid, determined to win and patient when attacking. These characteristics can be improved even further and with some more chemistry between the players and even between them and their new head coach, the rest of the season can be successful for the Red Devils.
While on the other hand, Kelly Chambers shouldn’t be ashamed of her players’ performance despite the absence of an experienced player like Natasha Dowie which made things even a bit more complicated for the team as they were deprived of an excellent finisher inside the box. Reading resisted Manchester United’s attacks for most parts of the match and showed great defensive compactness that could disturb their next opponents if they accompany it with more attention in key moments and more accuracy in the final third passes/shots to exploit the chances that they will get.