The fourth game week of the 2020-21 Danish Superliga saw league leaders Brøndby IF take a visit to seventh place Randers, who are 5 points adrift of their opponents. Brøndby have started their season in a good fashion by posting 3 wins on the trot while Randers will be looking to get back to winning ways after losing to the defending champions FC Midtjylland last weekend.

This tactical analysis will discuss the tactics deployed by both the teams and how each of their managers set them up for this clash. Let’s begin the analysis.

Brøndby lined up in their usual 3-5-2 formation that they have been using since last season. Manager Niels Frederiksen made 2 changes to the team that won last weekend as he brought in Josep Radosevic and Andreas Bruus for Lasse Vigen and Peter Bjur. 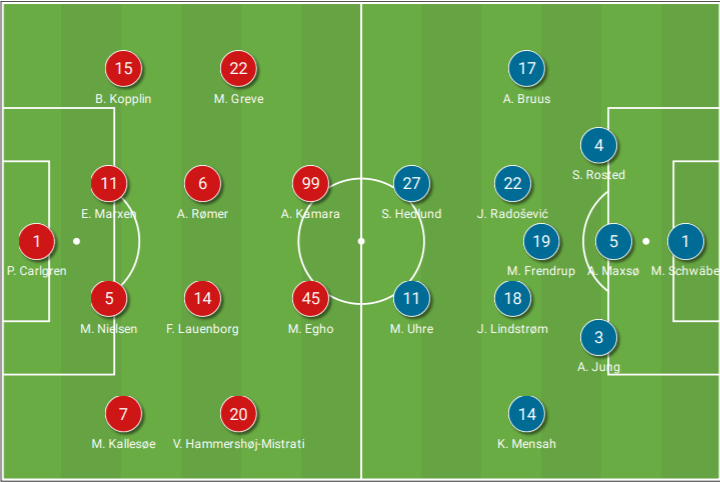 Randers on the other hand lined up in a 4-4-2 system that later changed to a 3-4-1-2 in the second half. Thomas Thomasberg made 4 changes to the lineup that was defeated 1-0 against FC Midtjylland. The likes of Egho, Kopplin, Mathias Nielsen, and Marxen came into the team with the rest of them retaining their places.

Brøndby in their flat 3-5-2 mostly looked to play a direct style of football by passing the ball to their forwards when they made runs into the channels. This was effectively done when they were able to break after winning the ball in the midfield.

In the above image, we can see that after playing through the midfield, Brøndby have their strikers in a 2 v 2 situation against the Randers centre-backs. Most of the time, the strikers would position wide and would start from the space vacated by the full-back who has pushed high to attack. This way, with one direct pass, Brøndby looked very dangerous during such counter-attacking situations. A similar situation is given in the image below as the striker makes a run on the blindside of the centre-back and looks to cut inside after a 1 v 1 situation. 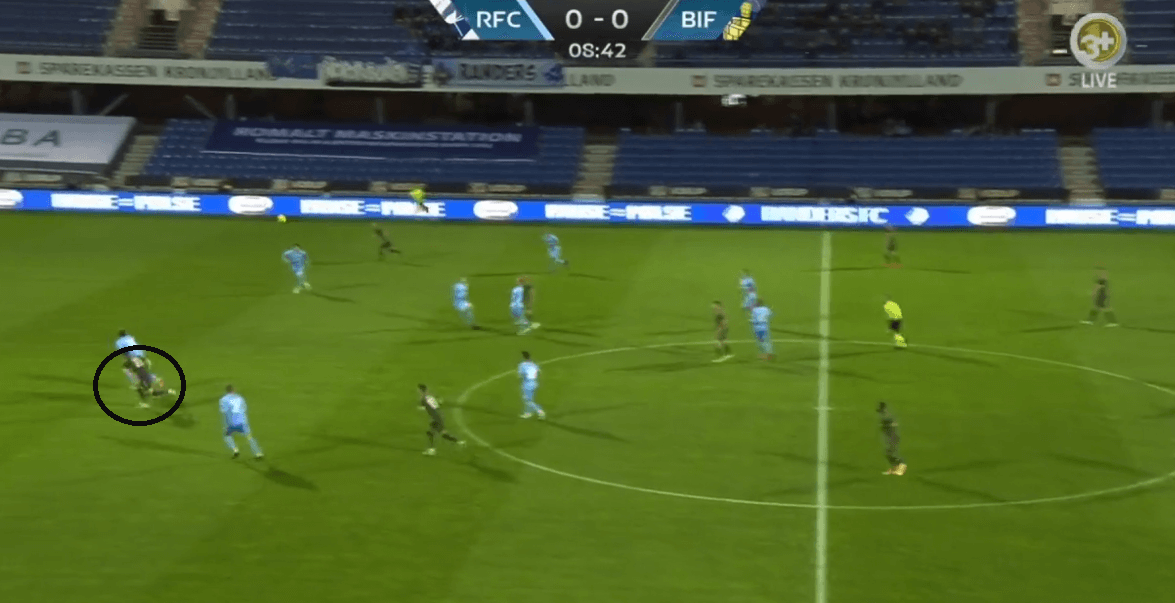 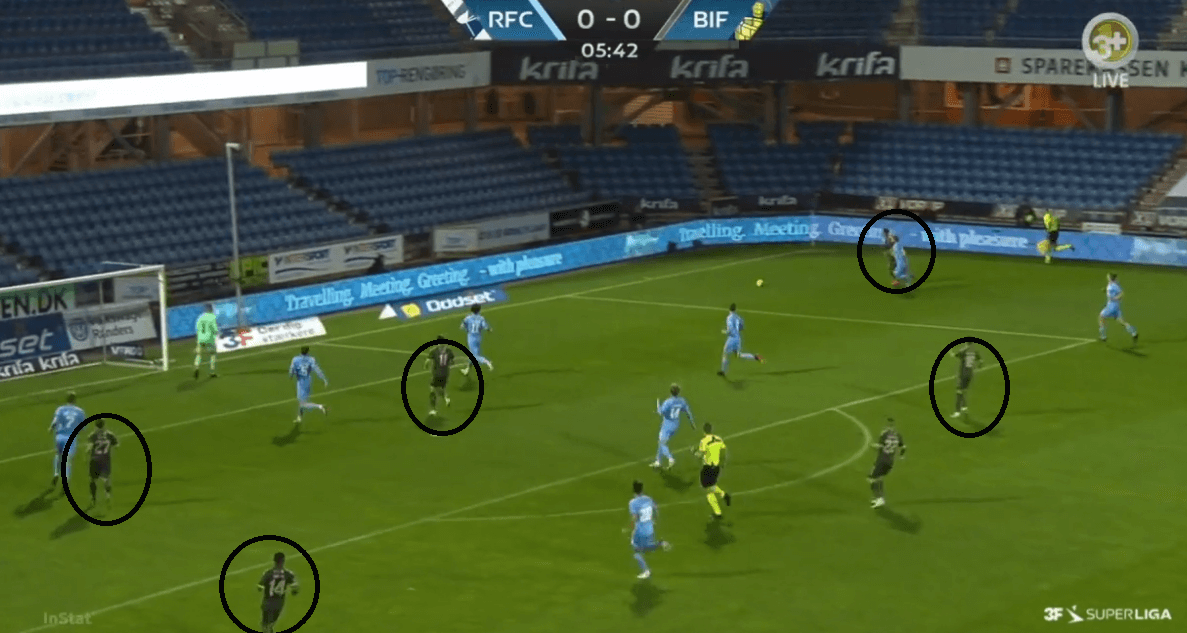 The fact that Brøndby played 3-5-2 against Randers’ 4-4-2 meant they were able to create numerical superiority in the first phase as well as the second phase build-up. The centre-backs had a 3 v 2 advantage against the 2 strikers and the 3 midfielders outnumbered the 2 double-6 of Randers. The example of that is given in the image below.

The wing-backs joining the attacks also meant that the pitch could be easily stretched by them. This way, the Randers defenders had a dilemma as to whether to close the gaps centrally or go out to mark those wing-backs. But with the strikers staying central and on the outside of the centre-backs, they were forced to stay close to the strikers and leave spaces for the wing-backs.

Their build-up structure from the back was similar to that of Arsenal’s under Mikel Arteta. Here, the back three becomes a back four with the right wing-back staying deeper as a right-back and the left wing-back moving into the left-back like how Keiran Tierney does at Arsenal. The middle centre-back has moved forward up to the midfield (red-circle in the image below). This is done to effectively stretch their players to follow them and beat the press by strong overloads.

Randers pressed higher up the pitch as they looked to win the possession back from Brøndby. Their PPDA value for the match was 8.4, which was less when compared to that of Brøndby’s (9.4). But that value was heavily brought down during the second half as the value in the first half was at 10.1 and in the second half, it was 7.2. This was because of their poor pressing structure in the first half that led to Brøndby easily playing out of the back at times.

Though their off-the-ball structure was 4-4-2, they only pressed with one striker higher up the pitch with the other marking the pivot making it much more of a 4-4-1-1 formation. As a result, this gave huge space to the Brøndby’s right centre-back to move the ball forward with ease. After the first goal from Brøndby, Randers improved their press by committing men forward like in the image below. 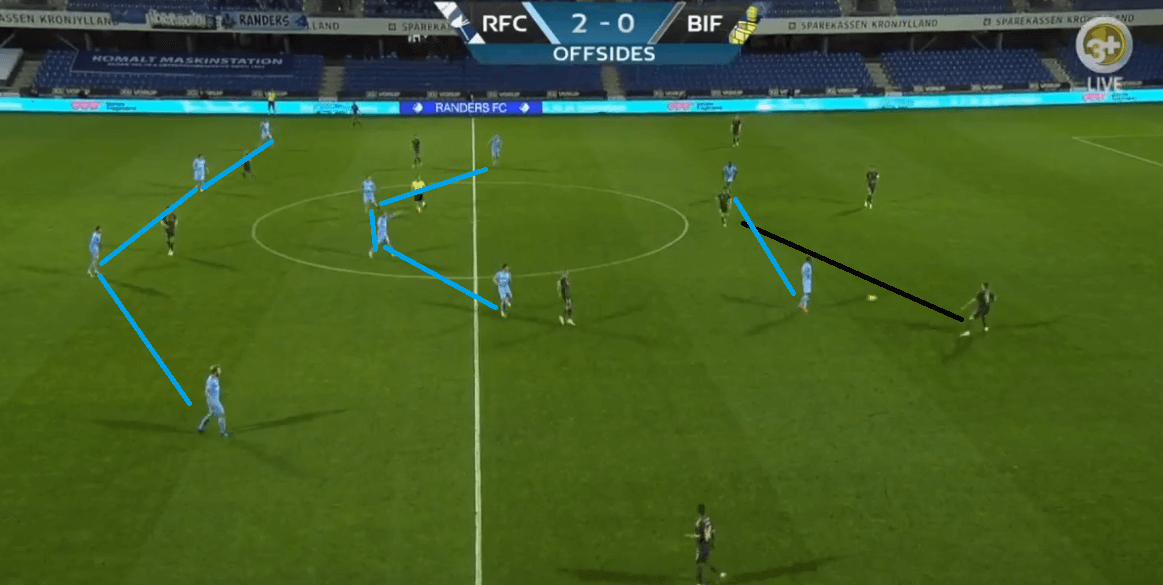 Like many teams that struggle to press, Randers also didn’t press as a team. When the forward and the midfield line went higher up the pitch to press, the defensive line did not follow them. They faced this issue throughout the match and didn’t rectify it even in the second half.

In the second half, they shifted to a 3-4-1-2 formation with it being more of a 5-2-1-2 without possession. This eliminated a couple of issues that they faced in the first half. First, in the first half when they pushed men higher up the pitch for attacking, they did in a 2-2-6 formation. This made them vulnerable at the back and as we saw, it left them in a 2 v 2 situation with the strikers. With a 3-man defence, they added an extra body and that security was essentially provided. Whenever they stayed wide and made the run now, one of the centre-backs can stay on or even move wide with the guarantee that the third centre-back will take care of the defensive duties. The second reason was again adding an extra midfielder to again eliminate the 3 v 2 situation Brøndby had on them in the first half. Their 3-4-1-2 formation in the second half is shown below. 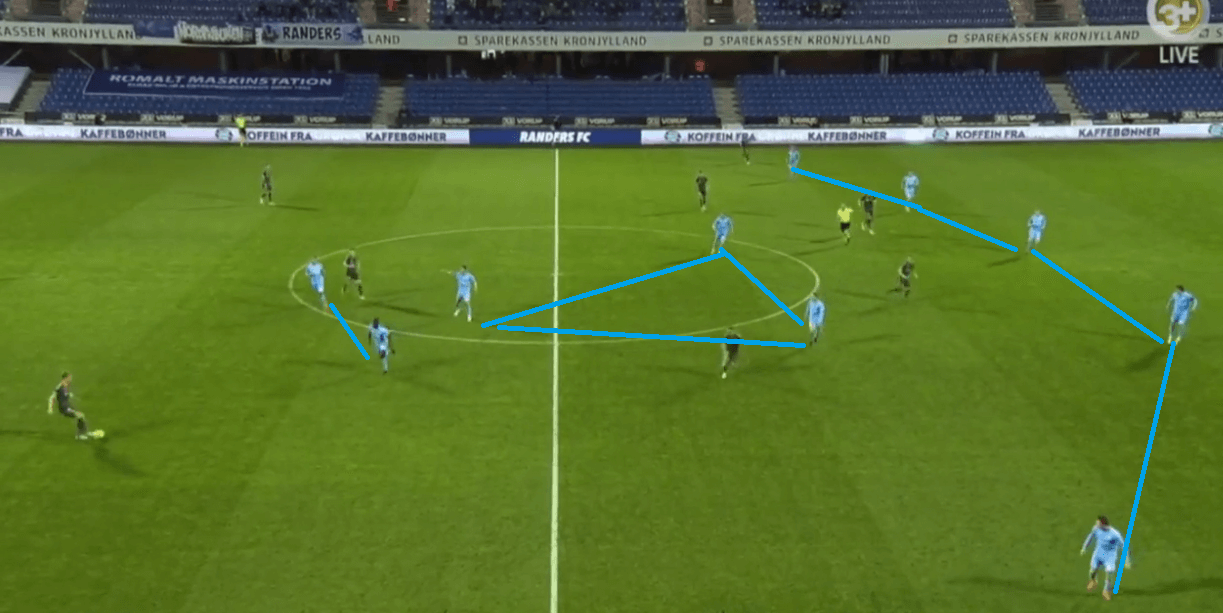 Randers in a 4-4-2 formation, put their formation in a 2-2-6 with the full-backs pushing higher up the pitch and overlapping to provide the width in both the flanks. They had a majority of possession with a total of 56%. They overloaded the wings and created numerical advantages that allowed them to move higher up the pitch. We can see that in the image below as Randers have created a 4 v 3 advantage in midfield and using that, they have progressed the ball higher up the pitch. 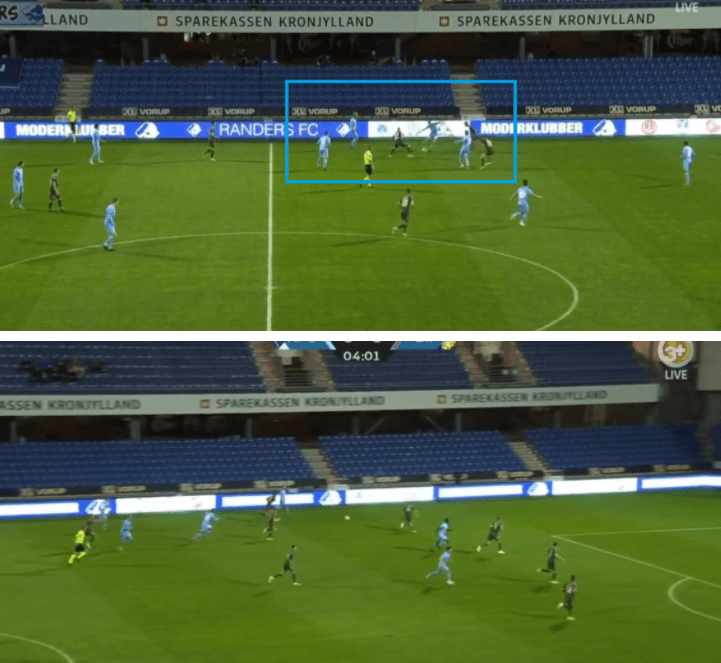 As Brøndby looked to be proactive on the ball, they did so by immediately engaging in duels and winning the ball back by following the player in their zone and vacating their position. Randers looked to take advantage of that by exploiting those spaces using one-touch plays and third-man runs like the one in the below image. 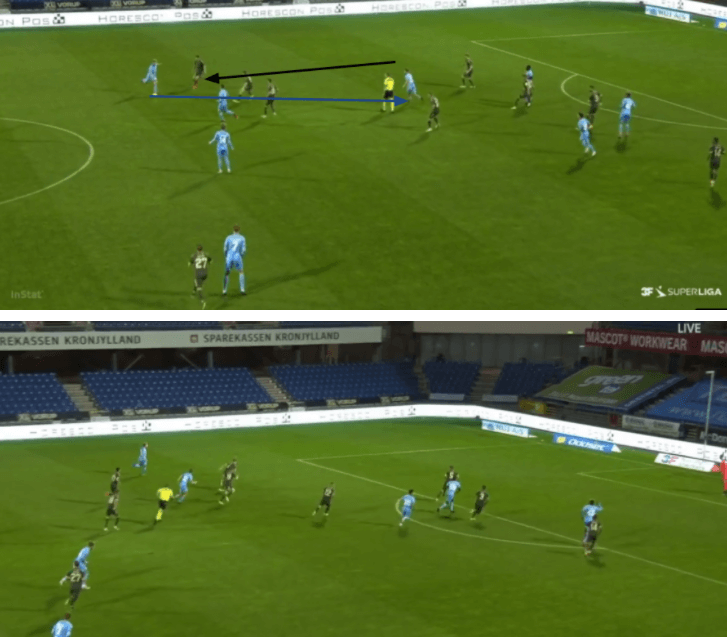 They also proceeded to drag the defenders when the ball carrier attracted a lot of players. The players made good use of that by making Thomas Muller-esque runs, which he does for Bayern Munich, into spaces and channels. This way, they were able to get into the box but their quality in the final third was poor and the final ball was not effectively provided.

To counter the 2-men forward press by Brøndby, Randers had to drop one of the central midfielders as a third centre-back and the other stayed as a single man pivot. This is similar to that of Manchester United when they ask Matic or Mctominay to drop for better build-up play. 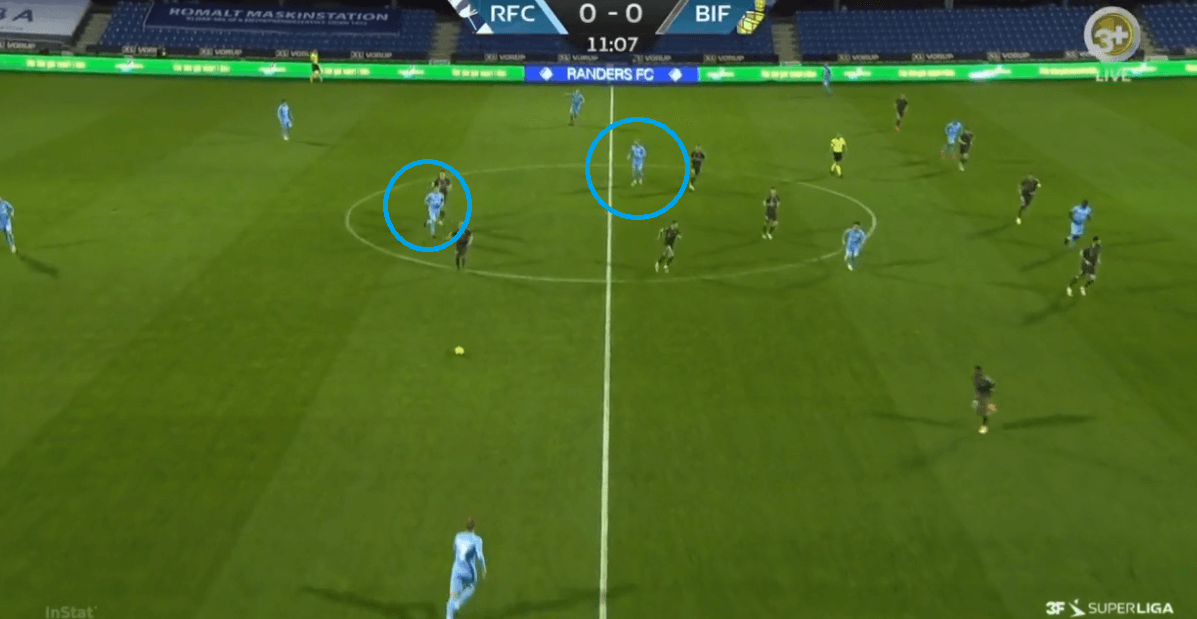 With the change of formation to 3 at the back, they need not drop the CM and can instead use them at their natural position. At times they also inverted their full-back, especially their left-back, to remove the 3 v 2 advantage that Brøndby had. But since the full-back had to provide width, they couldn’t use this tactic for the most parts of the match. 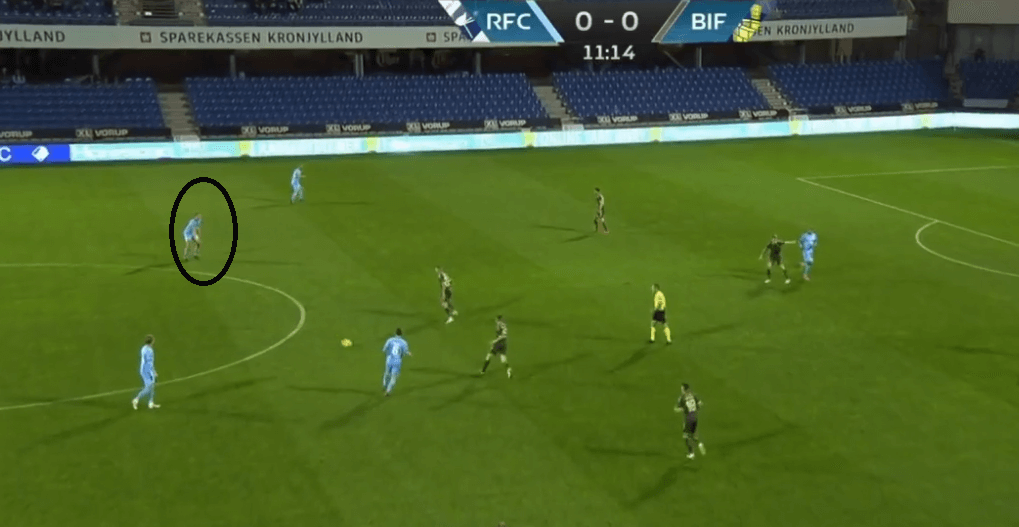 Brøndby defended in a flat 3-5-2 formation with it shifting to a 5-3-2 deeper in their half. Especially after their goal and in the second half, Brøndby parked the bus and sat very deep. The wing-backs dropped deeper when Randers had possession and helped the team to counter the 4 forwards when Randers were in the final third. 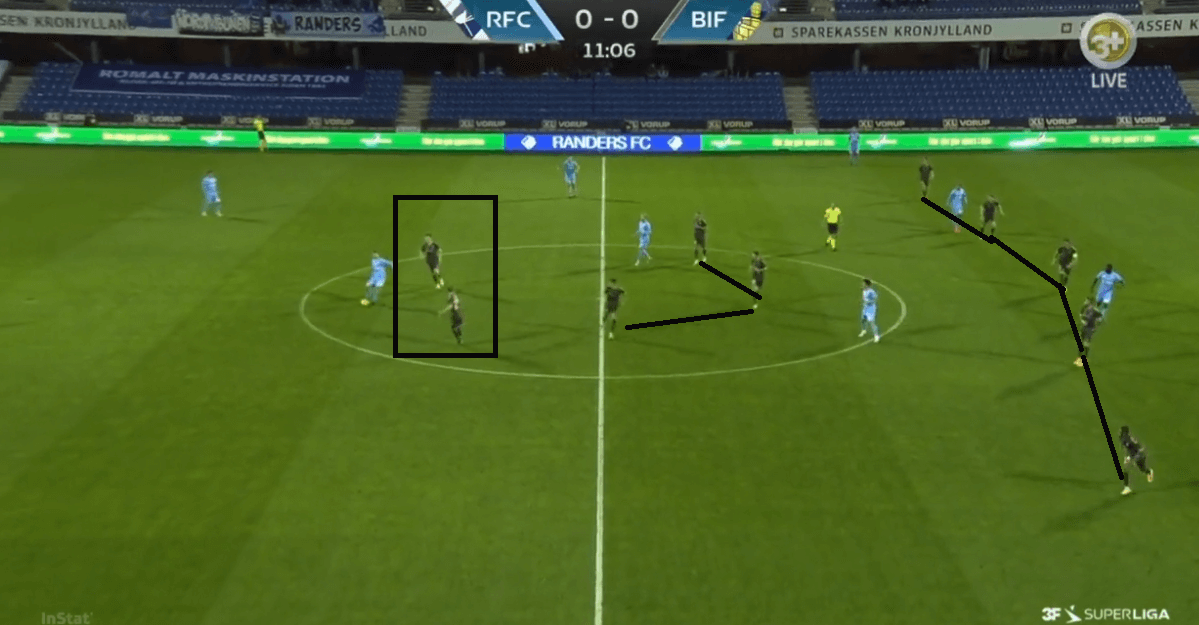 The wing-backs would press the opposition full-back (red circle) whenever they had the ball and this effectively made their formation into a 4-4-2. But since there is an extra centre-back present, even when the wing-back vacated the space, the centre-back (black circle) would take care of covering it. 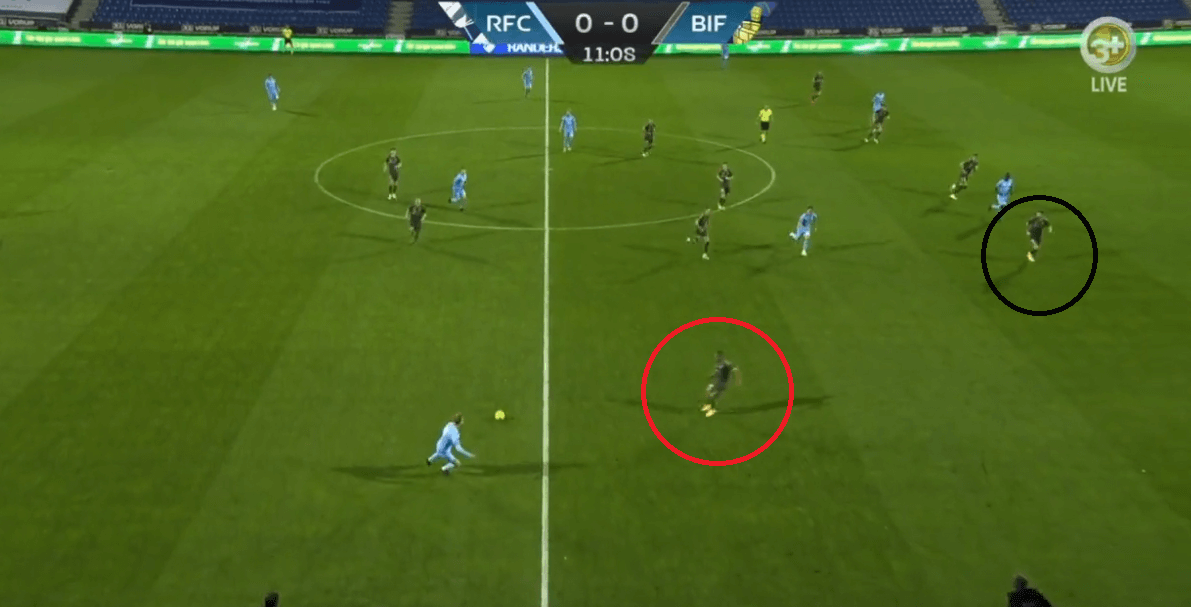 This compact formation blocked the central passing lanes for the Randers centre-backs and they were forced to pass the ball to the wing. Unlike the Randers’ forwards, Brøndby’s forwards were good in closing the passing lanes to the midfielders, thus limiting their influence. 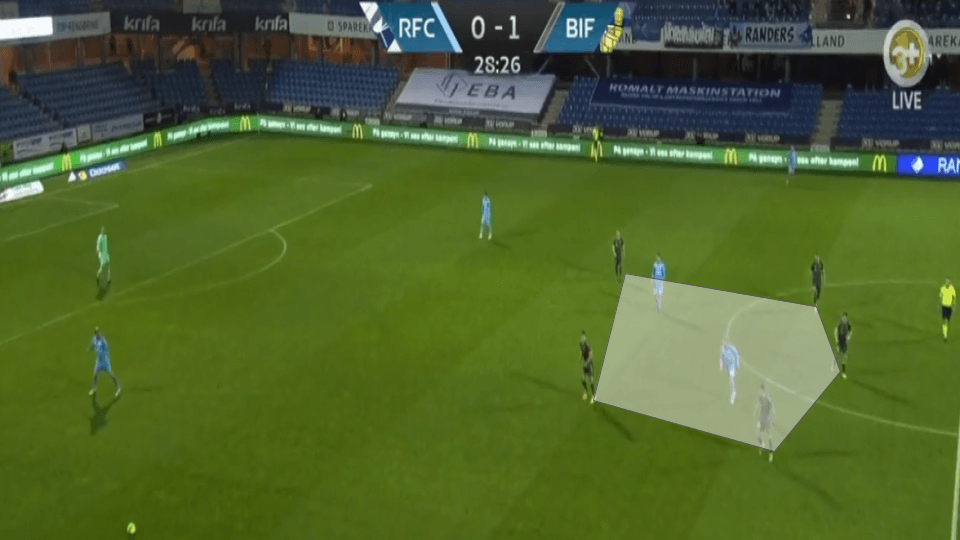 We can see in the above image as to how they have formed an effective box around the central midfielders using their forwards, who did not press the centre-backs but instead stayed deeper to mark the midfielders. But since Randers were prepared to play from wings, they didn’t face this as much of an issue.

Eventually, Brøndby emerged victorious with a 2-1 victory, with a corner goal and a counter-attacking goal, as Randers’ change of system could not prevent them from a defeat despite providing them with good defensive stability. The win consolidates Brøndby’s position at the top of the top table with 12 points and Randers stay in seventh place at just 4 points.