The Coppa Italia 2019/20 Final was the clash between Napoli and Juventus. Although this was only the 17th game under Gennaro Gattuso, the Gli Azzuri claimed the first title of the season thanks to the strong performance in the penalty shootout.

The 0-0 result of 90-minute of play might be unexpected by fans, as both teams often play offensively, always looking for score goals. However, both managers tried rather conservative defensive setups that ensured a clean sheet; these intriguing tactics were the main theme of this analysis.

Napoli started a strong squad, although Konstantinos Manolas missed the game due to an injury. This was a similar squad that they used against Barcelona in the UEFA Champions League, with Dries Mertens playing as the striker. It was a 4-1-4-1 formation.

Juventus played in a 4-3-3, with Miralem Pjanić, Rodrigo Bentancur and Blaise Matuidi playing at the midfield. Douglas Costa was given a chance to perform, playing as a right-winger. Paulo Dybala was the striker.

Napoli: playing out from the back

The build-up plays of Napoli should never be underestimated. They successfully broke the Juventus press in the previous clash by exploiting the structural issues of the system. Assuming the Old Ladies were pressing in a 4-3-3, when the left-winger approached the right centre-back, the wide midfielder should reach the right-back to shut the free man. However, this often left the wide midfielders of Napoli free, and their full-backs were extremely strong to pick this option even under pressure.

Though the ball was at Giovanni Di Lorenzo’s weaker foot, it was not a problem as the Italian player was well-trained to play the out-ball. Ruiz was found by a lofted pass, afterwards, capitalised on the 2v1 and further progressed.

The wingers (Lorenzo Insigne and José Callejón) often manipulated the Juventus full-backs by movements or positioning. That’s why Alex Sandro could not step up to engage Ruiz early. 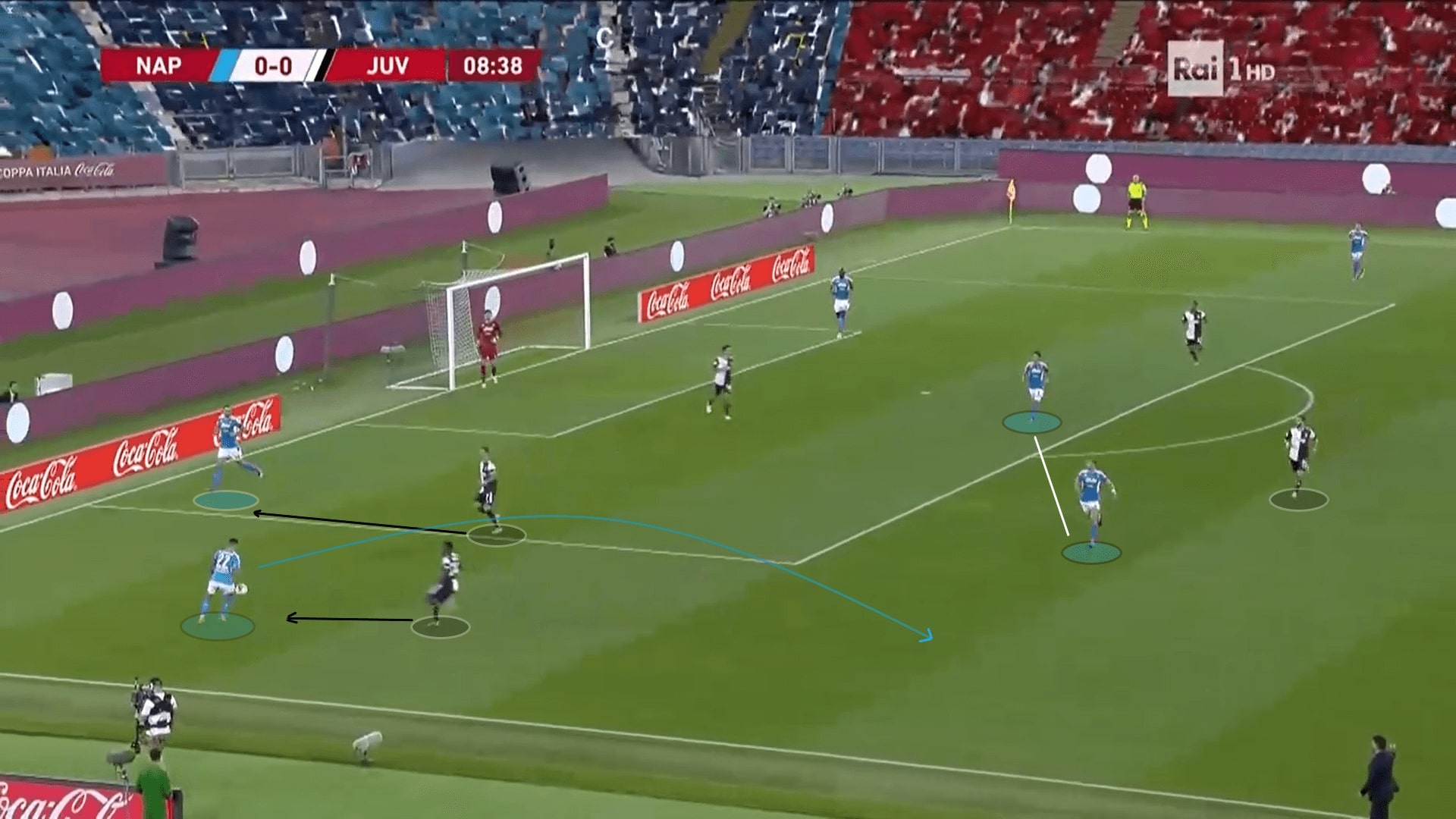 The above example was a typical case that showing Napoli broke the press at flanks. Maurizio Sarri was fully aware of this, hence, tuned his defensive tactics which we would explain in the next section. Consequently, the Napoli centre-backs were not being pressed, free to play the progressive pass.

We know Kalidou Koulibaly was strong at passing, but Nikola Maksimović was even better to play the penetrating passes in this game. Juventus might not be expecting this, as the Serbian centre-back struggled a bit when given the same role previously.

Napoli advanced midfielders utilised spaces between the lines, always looking for a pass from the centre-backs. Meanwhile, Demme was doing well by using his positionings and movements to open the passing lane. Here, his adjusted positioning lured Matuidi and Maksimović had a wider passing angle to Ruiz.

If Ruiz could turn, he would do this immediately to look for other options between the lines. Noted how Mertens kept occupying the centre-backs in this game, which hindered them from leaving the backline. This ensured advanced midfielders enjoying spaces between the lines. In case Ruiz was unable to turn, a simple third man plays to find Demme also progressed play here. 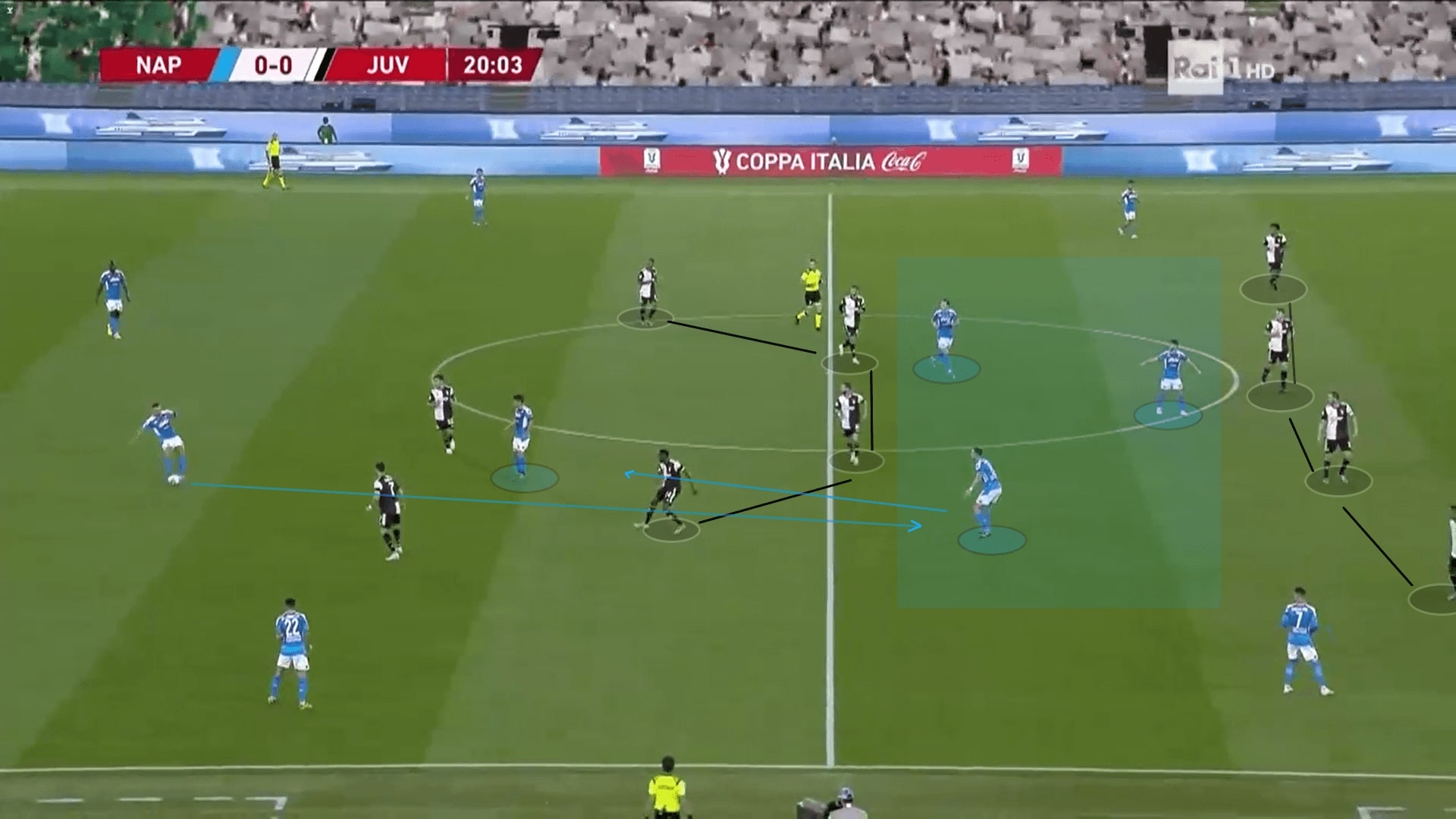 However, Napoli struggled to deal with the Juventus defenders even having some 1v1 opportunities. Physicality and pressure from the backline were strong, and the midfield three were quick to track back, making Napoli difficult to create chances even breaking the first and second line.

We are explaining the strong defensive performance of the Old Lady in the coming section.

In the Serie A loss, Juventus pressed high but failed to control the Napoli full-backs, leaving the flanks as the escape route. Therefore, Sarri tweaked the defensive style of play a bit and tried avoiding the same issue – which was a success.

Juventus were setting a midblock more often. When the team was pressing, they tried leaving the centre-backs free instead of sticking to the usual approach.

Here, Ronaldo was instructing Matuidi to hold his ground, as he would be the one to press the right-back. The Frenchman did not have to travel a large distance to access the target, ensuring the number and limited spaces at the midfield.

However, Napoli easily circulated the ball as the deepest point of the build-up was unmarked often. Also, this disciplined pressing did not last long as Ronaldo tended to preserve his stamina in the offensive phase. Matuidi still had to cover spaces behind the Portuguese winger. 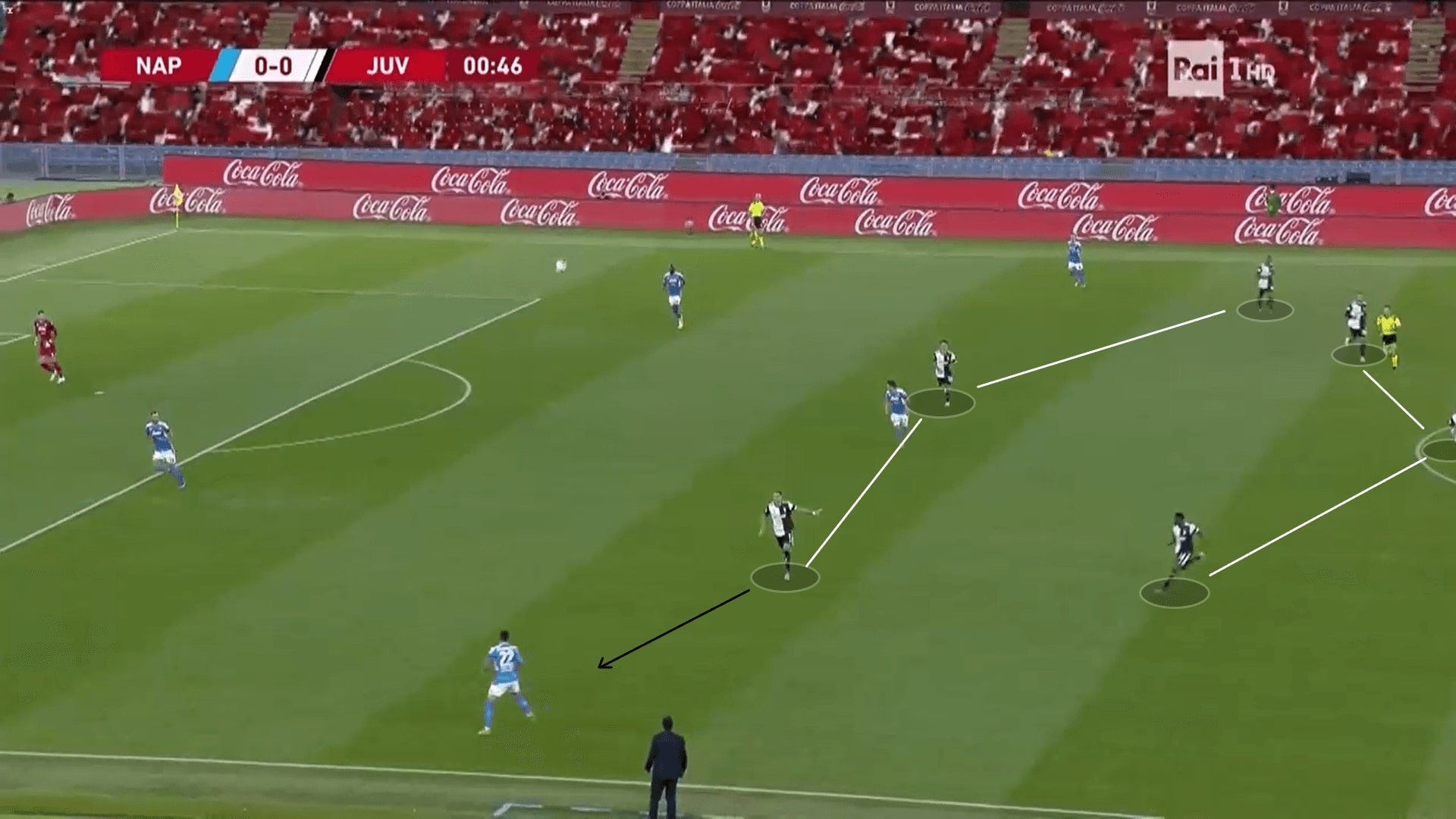 When defending in a midblock, you could interpret the defensive shape of Juventus as a 4-4-2, as Ronaldo and Dybala stayed high to look for the counter-attacking opportunities. Costa often dropped to the midfield, and Matuidi moved to the left-winger position – a typical setup of the Old Lady.

We have drawn the shape here, Juventus tried very hard to cover the ball side by the second line, trying to force the ball wide. Apart from some cases that Koulibaly or Maksimović passed through the midfielders, Napoli tended to attack with the wide full-backs and wingers. Sarri’s men were disciplined enough to track the supporting runs and minimised the threat at flanks. 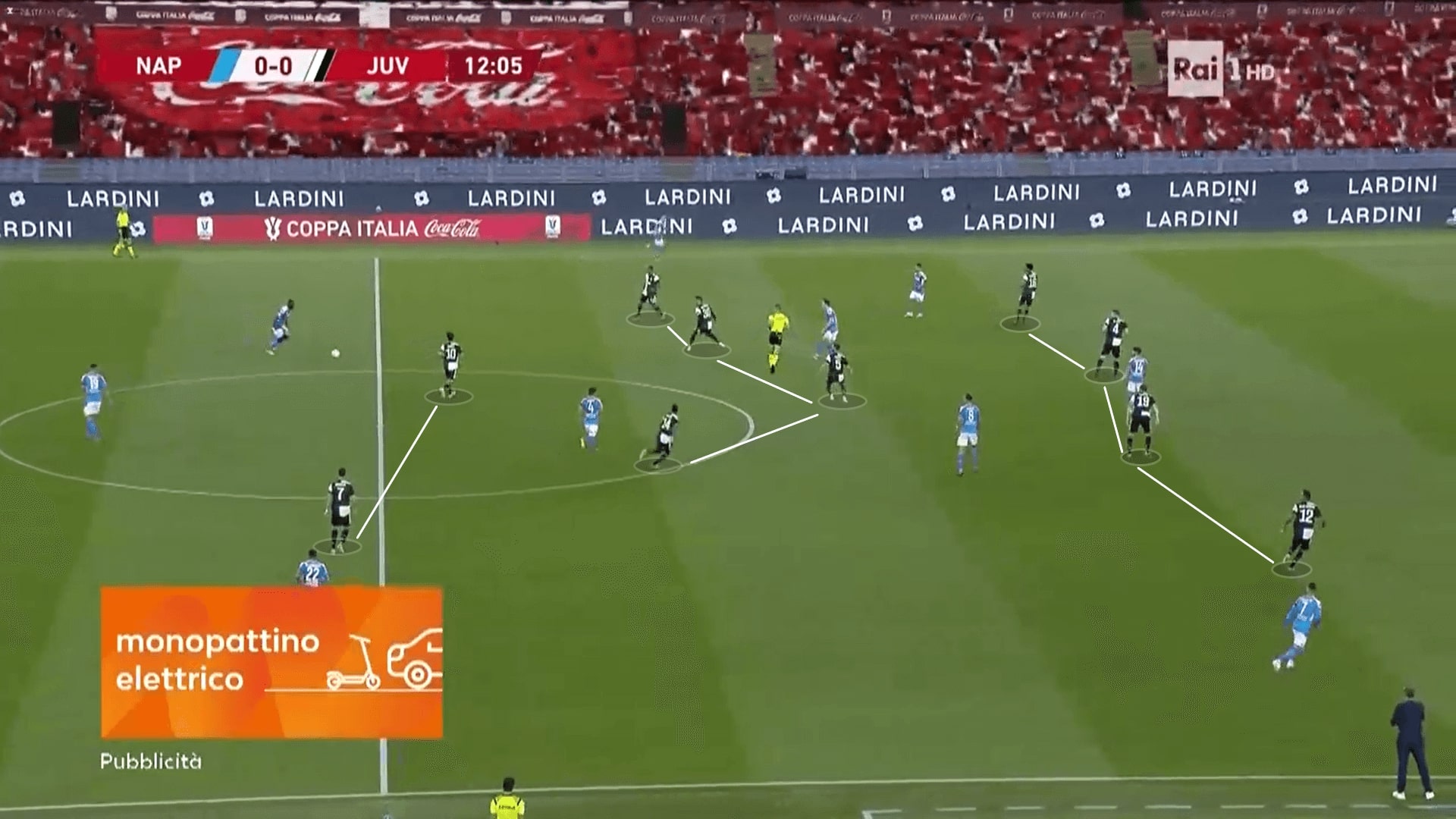 Juventus were also strong at setting a deeper line when trying to deny the crosses in the final third. The backline shifted near the six-yard box very early, while the second line also moved into the box. Also, when engaging in 1v1 situations, Juventus were strong and seldom being dribbled past.

The below image was showing two defensive lines; both were flattened and overloaded the penalty area. 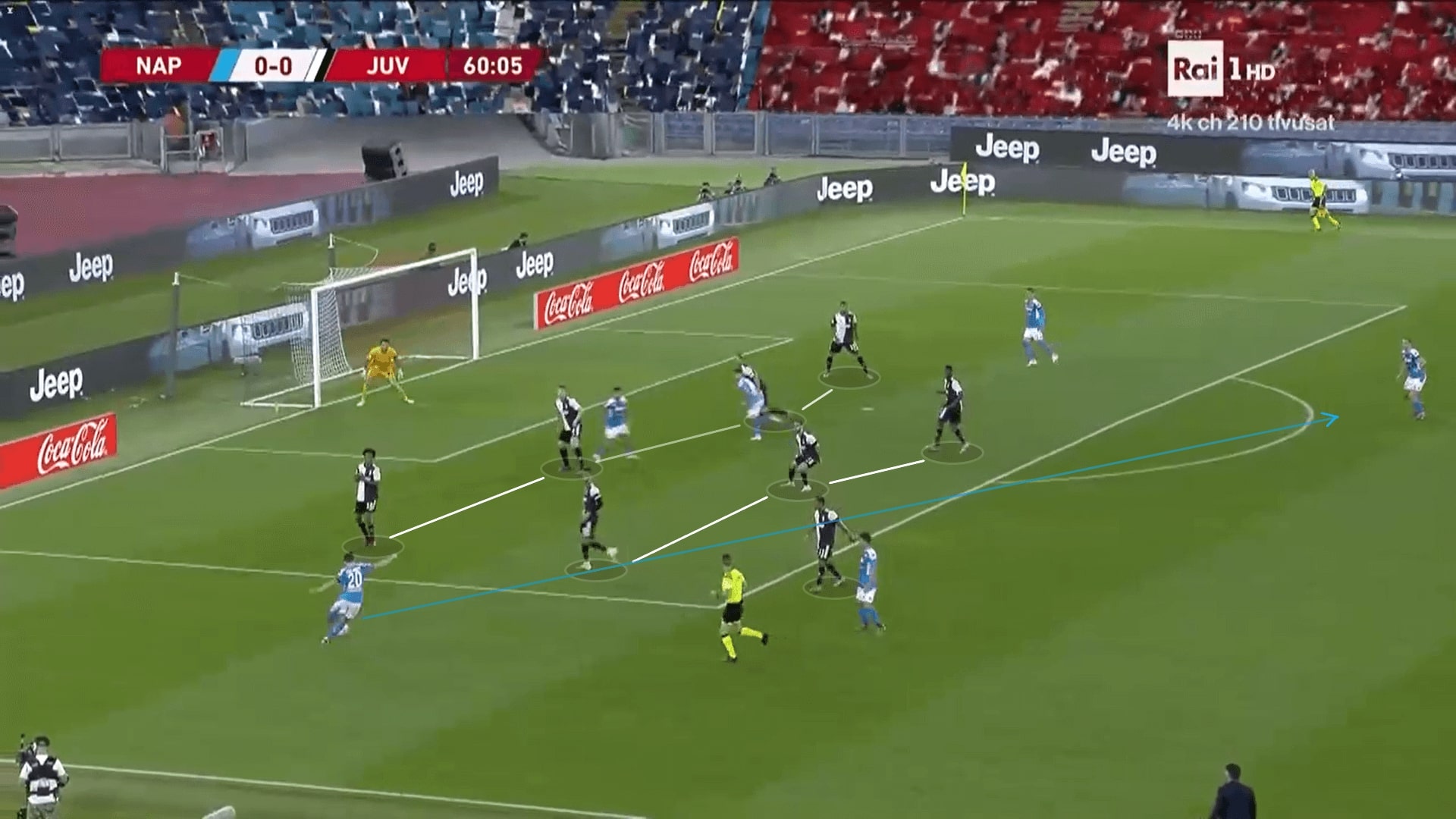 Napoli also placed a solid midblock, just the same way they did against Barcelona and Inter earlier this season. The PPDA level was similar to those games as well – 28 vs Juventus and 30.46 vs Barcelona.

In general, the defensive shape was a 4-1-4-1, but it varied across the situation. Since the wide midfielders (Zieliński and Ruiz) should push higher according to the ball’s positions. When the ball entered the corresponding vertical zone, that ball side midfielder stepped up to narrow the passing angle of the receiver instantly. Gattuso wished Juventus to play the ball wide, hence, shutting the central access was the top priority in this game.

Therefore, the shape could be a 4-3-2-1 when the midfielders were moving. Since Matthijs de Ligt passed to Leonardo Bouncci here, Zieliński was integrating himself into the midfield line while Ruiz was leaving it. 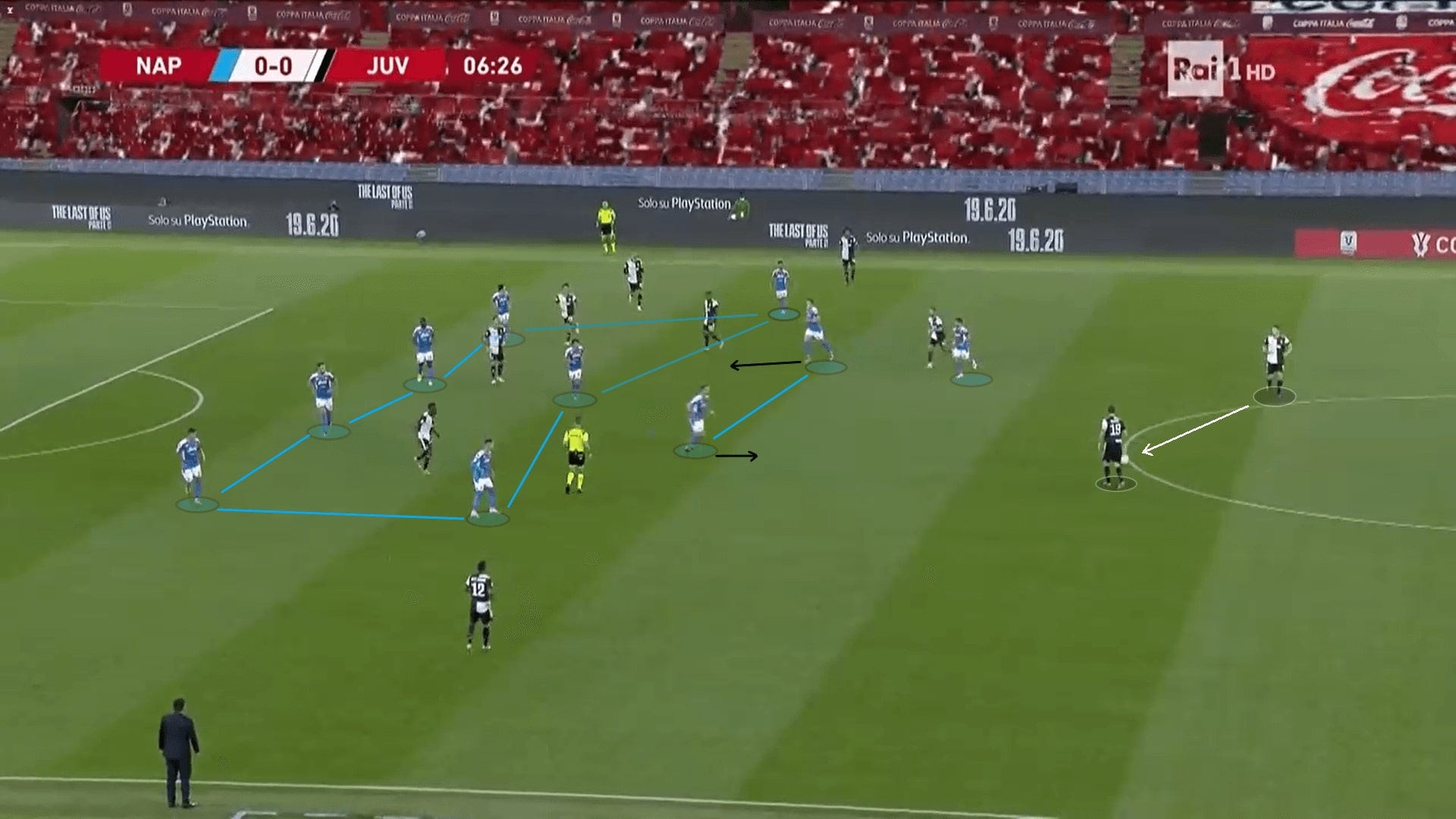 This defensive block of Napoli was compact vertically and horizontally as well. Spaces were minimised between the lines. We have drawn the close proximity of defence above.

Even Juventus played into it, the receiver often quickly releases the third man at the wide areas as the centre was congested. The Old Ladies were very poor in the final third; we will be explaining these in the last section.

The midblock was successfully denying the central penetrations. Juventus were unable to develop meaningful chances at the centre, being forced wide usually. Below is the positional attacks by flanks of Juventus in this game, only 13% of them was generated through the centre. This suggested 87% of the attacks were coming from flanks.

Both Callejón and Insigne were committed to the defensive duties and protected the flanks very well. Therefore, the full-backs stayed narrow and kept the half-spaces occupied and safe.

Even Juventus circulated the ball to the weak side through the defence; no numerical advantage was guaranteed because the block shifted quickly. This often trapped the ball with at least four players – ball side midfielder, Demme, a full-back and the winger.

Here, Juventus switched the ball to the left flank, and Matuidi was quickly surrounded by four players. The pressure was arriving from all angles, and the Frenchman midfielder was forced to play the ball, with the supporting full-backs as the only option. Callejón was well-prepared to track the run for this. 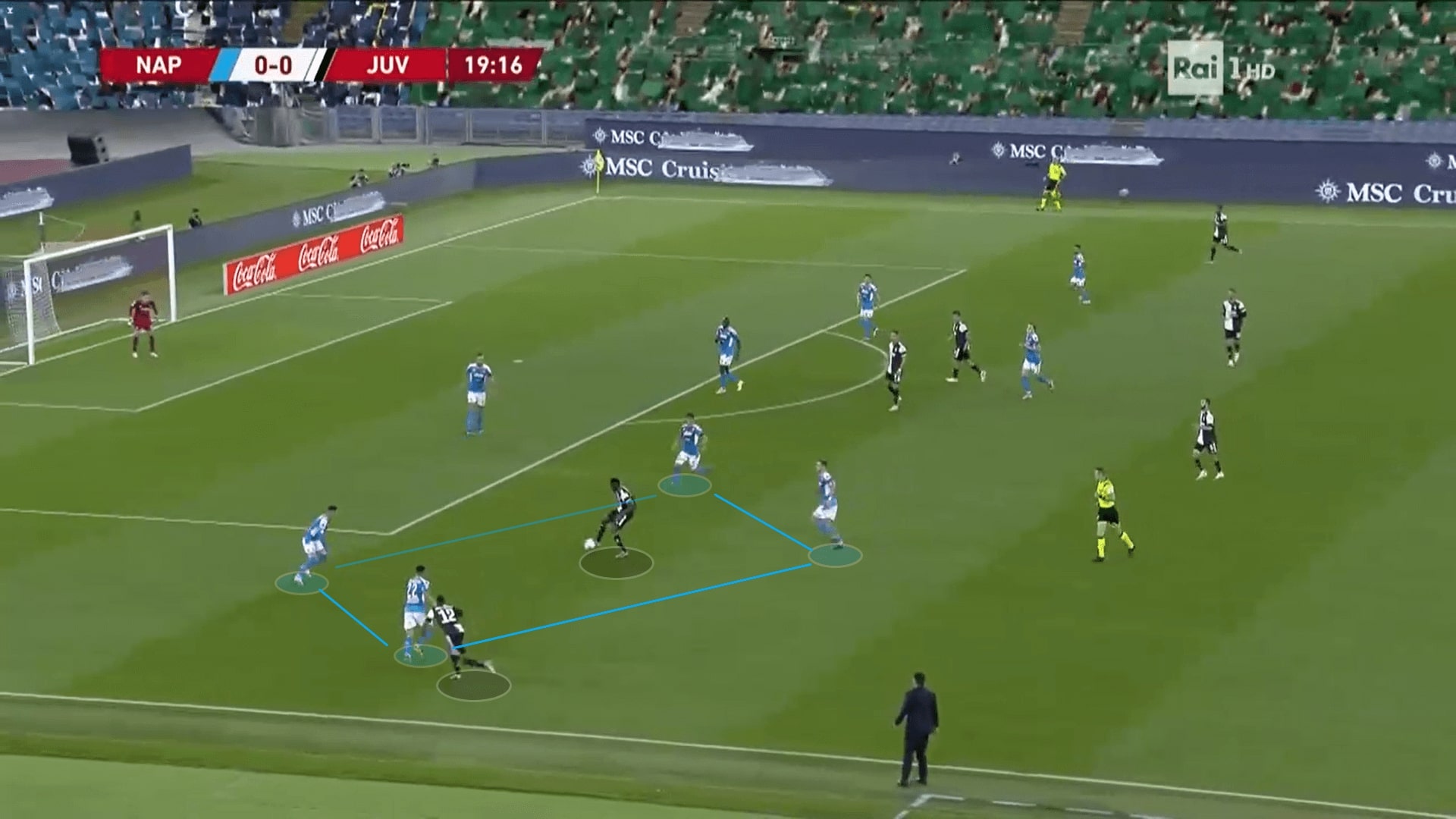 Another decisive man that contributing to the solid defence was Demme, who operated as the only defensive midfielder. The German pivot was an additional layer between the backline and midfield, covering any free players between the lines. This ensured Juventus were not exploiting those spaces.

The below example summarised most elements of Napoli defence on this night. Bonucci was forced to play wide as the central option was shut by Zieliński and Insigne’s positionings. However, the inward-passing third man plays was denied as Demme covered the inside target.

Although Costa and Cuadrado were overloading the wide zone, Juventus often failed to exploit these dynamics because of excessive dribbling and slow decisions. 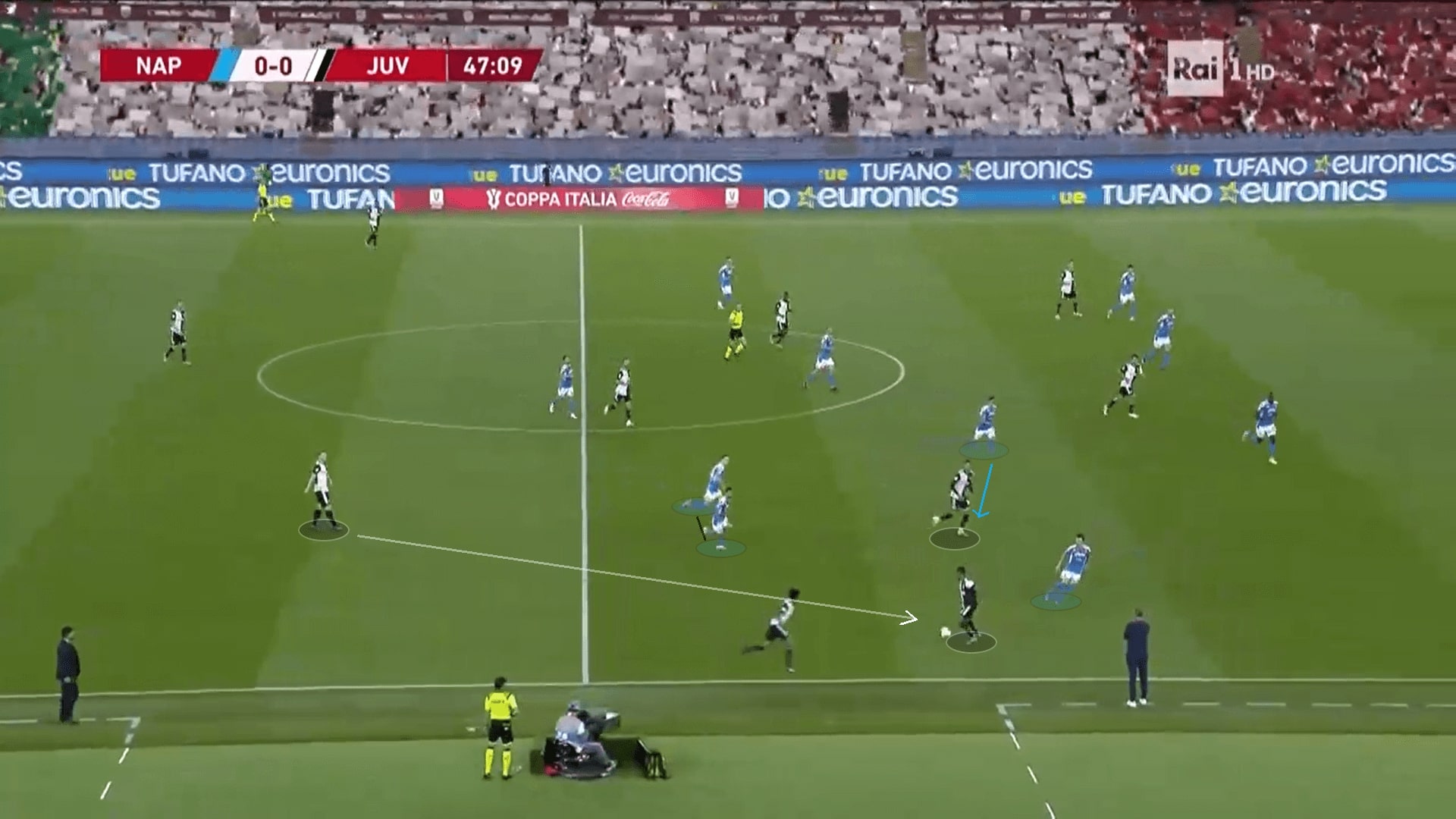 87% of Juventus attacks were coming from flanks, so, crosses matter a lot. Although reaching zone 16 and zone 18 and having the crossing opportunities, the crossers failed to provide quality deliveries because of the tight markings as explained.

Here, we highlighted how poor were the crosses with this graph. Only three of their 19 crosses reached the golden zone in the penalty box. The rest were either blocked or went to the opposite flank. Hardly could they create good opportunities with such a low quality of cross. The crossing accuracy: 26.32% was worse than the season average of 31%.

Since Juventus struggle to create the chances through crosses, they could only try shooting out of the penalty box. 11 of their 13 shots were long shots, and most chances were gambling with 0.01–0.05 xG only. They have no strategies to break the midblock of Napoli.

Looking at the contrasts in xG (1.98–0.45), we might believe Napoli was the dominant side. However, this stat was not reflecting the reality, as 1.35 xG of Napoli were coming from the same minute and a corner. By deducting these attempts, the xG of Napoli was not much higher than the opponents: 0.63. As shown in this tactical analysis, the way of Gattuso to limit spaces and the individuals were excellent today.

Although Sarri prepared something different from usual, this did not help him to win the game. The offensive performance was unsatisfactory – poor use of spacing, slow tempo, lacking the layers, these were some issues of Juventus’ in this game. This should be a lesson to be remembered.