Roberto Firmino has assisted nine goals in the Premier League for Mohamed Salah, more than any other Liverpool player. Sadio Mane is tied along with the Brazilian, assisting the Egyptian for nine of his goals in the league. Three of Firmino’s assists to Salah came this season, just like the previous two years since Salah’s arrival from Roma. In the below visualisation, I try to recreate the goals scored by Salah that were assisted by Firmino. 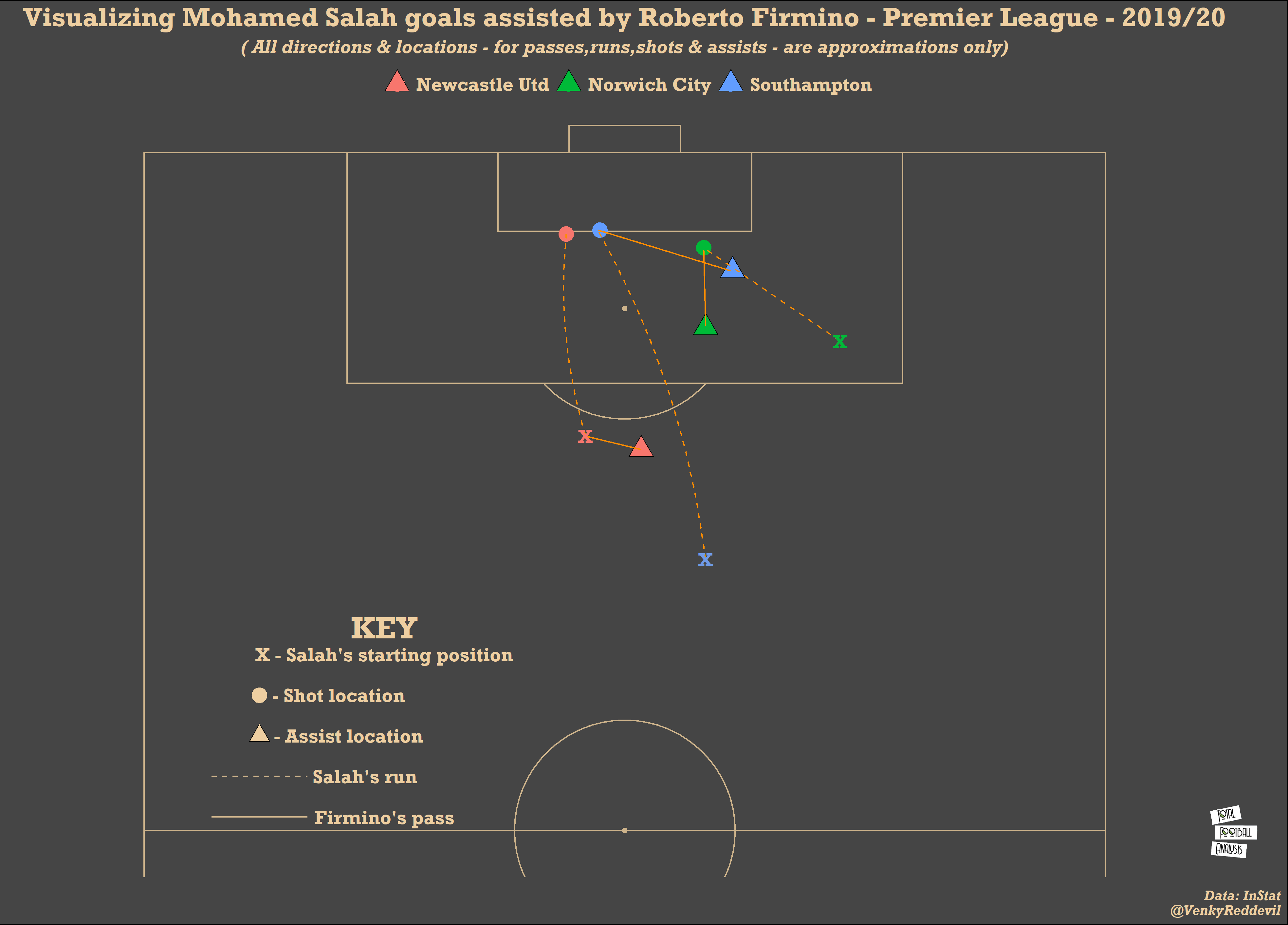 Roughly, one year ago, Liverpool welcomed Norwich City to Anfield on August 1, 2019 for the first game of the 2019/20 league season. Who would have thought on that day, that Liverpool would clinch the title by winning a whooping 99 points during the season. Although on that day, it was business as usual for Liverpool as the Reds won by a comfortable margin. The Egyptian was in full flow that night, scoring & assisting one to kick start another very good season personally. His goal came in the 19th minute with a calm, collected left foot finish after a lovely pass by Firmino.

Early in the season, in the second week of September, Liverpool met Steve Bruce’s Newcastle United at Anfield. As early as in the seventh minute, Jetro Willems shocked the Reds with a wonder strike that put the Magpies ahead but Sadio Mane scored a brace in the first half to ensure Liverpool were on course for another victory. The second half saw Mohamed Salah net his fourth league goal of the season. Firmino and Salah have been known to link up for some wonderful one touch passing. Salah’s goal was another example of that. Firmino, just outside the box, backheeled a slick pass which Salah collected on his left foot and continued his run inside the box to put the ball past Martin Dúbravka. Klopp’s men went on to win the game 3-1.

On February 1, 2020 Liverpool faced Ralph Hasenhüttl’s tricky Saints who were on an impressive run since the turn of the year beating Spurs and Leicester. The game was goalless at the break, but an eye-catching performance from Roberto Firmino in the second half, adding a hat trick of assists to his name, helped the reds score four goals in the second half and win the game comfortably. One of those assists was for Mohamed Salah. First, Salah played a lovely pass to Firmino, who then rounded Stephens and squared the ball back to Salah, the Egyptian then clumsily put the ball into the net.