With this in mind, we decided to take a deeper dive into how some of the Premier League clubs have set up this season. 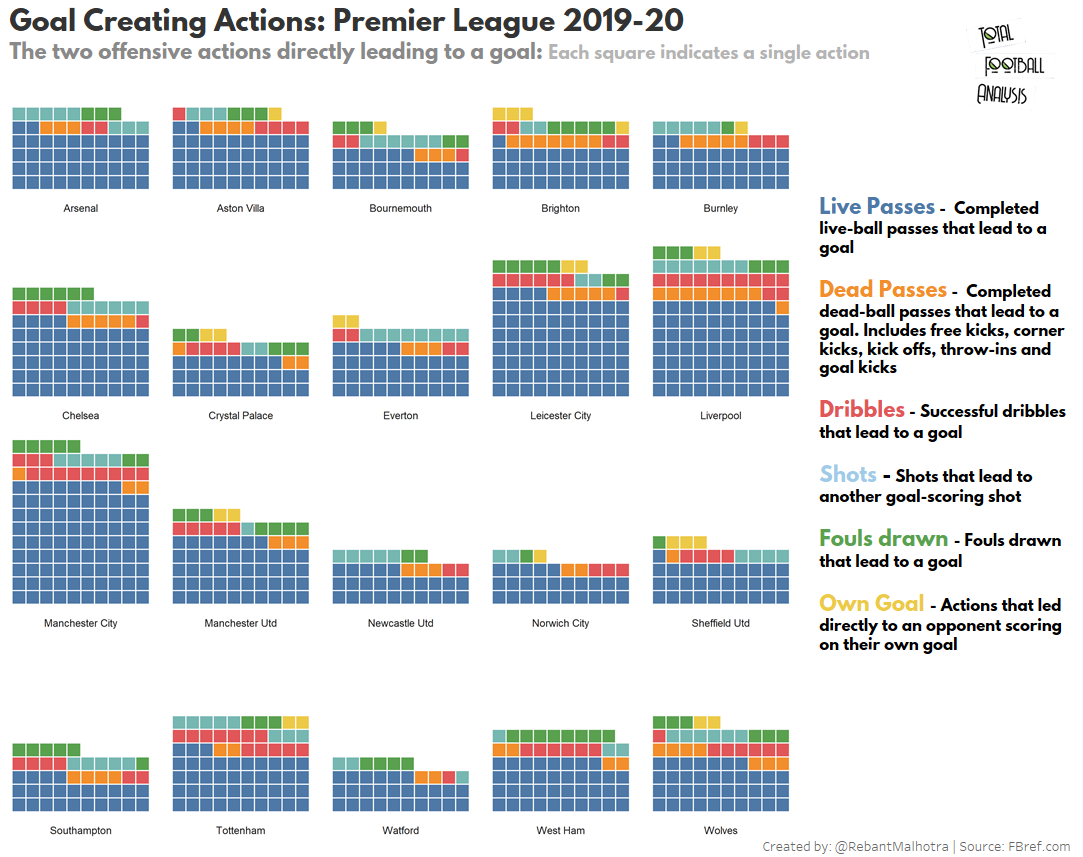 City’s tried and tested methodology of great movement in the wide spaces to deliver accurate cutbacks for players making their runs into the box was once again on display this season. With over 80+ GCAs purely through regular/live ball passes, their dominance in the passing game continues to be unmatched in the league.

Liverpool may not match City in the passing game but have established their dominance on set pieces. They are quipped with some wonderful dead-ball specialists and players (Van Dijk, Matip) who are great at winning aerial duels.

The Race for the Top 4 Spots

While this was supposed to be a restart year for Chelsea, the Blues have exceeded expectations with the largest number of live-ball GCAs after City, Liverpool & Leicester City.

Brendan Rodgers’ Leicester City has largely been the surprise of the season for many. While Rodgers has had plenty of naysayers in the past, he has effectively turned around the fortunes of the club and put them in pole position for the #3 spot. James Maddison has largely been the contributor of the GCAs through dead balls. However, the pick of the lot is Harvey Barnes who has individually been responsible for over 13% of their entire GCAs and is closely followed by the Maddison-Vardy duo.

The North London clubs have seen a lot of uncertainty this season with managerial changes and a spate of disappointing results.

While Spurs have only one individual (Son) in the list of top 20 players with successful dribbles, they are tied for the #1 position (with City & Liverpool) for GCAs through dribbles. The notable players who have contributed to this are Alli, Son & Lucas Moura.

Arsenal has historically always shown their attacking prowess despite the several other limitations, however, a dire season for the Gunners has seen them with 58 GCAs, a figure that matches those of relegation contenders Aston Villa. Mikel Arteta’s appointment will hopefully bring a change to the situation and see an improvement in GCAs through live passes, at the very minimum.

Manchester United are 2nd in terms of Foul based GCAs and would be leading the league on this metric if they converted the penalty opportunities they got earlier on in the season.

Daniel Farke has maintained his commitment to his attacking ideology at Norwich City, however promising performances have not turned into strong results. The Canaries are tied for the least number of goals scored with Newcastle United.

The triumvirate of Saint-Maximin, Almiron and Joelinton may boast of world-class dribbling ability but funnily Newcastle United’s GCAs through dribbles stands at a lowly figure of 2, the second-lowest in the league ahead of Watford (1).

With several advanced statistics into the picture, GCAs are one which can give us a glance of creativity and goal scoring patterns of teams. With a long break for all clubs in between, it will be interesting to see if teams have gone back to the drawing board to better prepare for the last leg of the Premier League that is about to come.