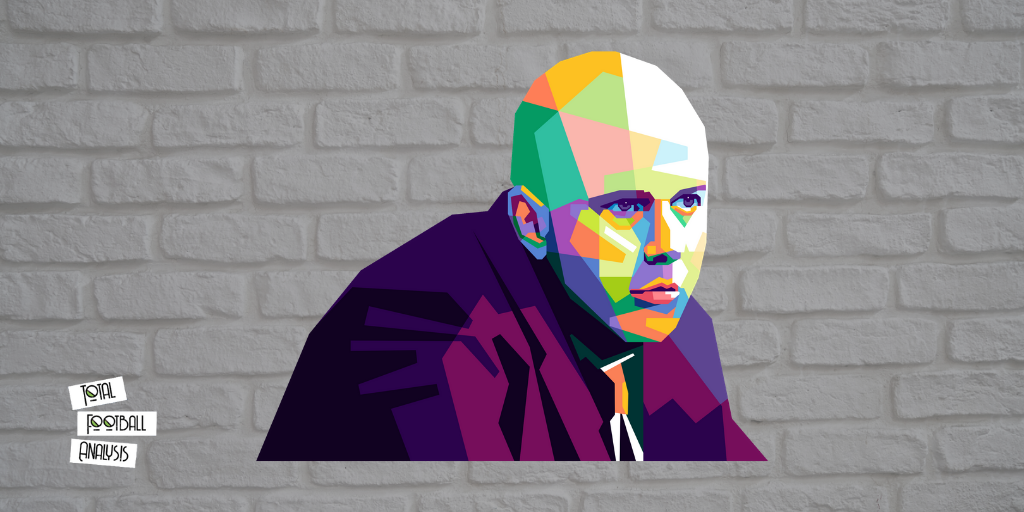 Arne Slot is the latest star in the Dutch managerial sky after impressing greatly at AZ
Alkmaar since taking charge in July 2019. Under his leadership, AZ are second in the
Eredivisie and also progressed to the last-32 of the Europa League by finishing second to
Manchester United in their group. These results, and particularly the performances that
brought them, are extremely impressive given that this is Slot’s first job as head coach,
having previously worked in PEC Zwolle’s academy and as an assistant coach at Cambuur
and AZ. This tactical analysis will focus on the tactical philosophy Slot has implemented thus far at AZ, particularly the fluid movement, full-back rotations and pressing.

Slot prefers a 4-2-3-1 shape as the base of his team, with the team defending in a 4-4-2 out of possession. However, the attacking shape of the team is very fluid and depends on the movements of the players which creates an ever-changing attacking structure that is difficult to describe. As we will see below, this structure is constantly changing as players move and react to the movements of their teammates. Slot’s team is quite possession-heavy and his style is very dominant, which has led to AZ averaging more than 60% possession in the Eredivisie and the Europa League this term. Additionally, AZ average an xG of 2.02 and an xGA of 0.87, further indicating how they have dominated teams this season. The 41-year-old coach has been quick to stamp his authority on the playing style of AZ and he has been very successful in implementing the game model quickly. Now, let us look at how they actually play.

Ever since Pep Guardiola introduced the roles for Philipp Lahm and David Alaba at Bayern
Munich, the concept of inverted full-backs has been something only the most innovative
coaches have implemented on a consistent basis. Basically, the role means that the full-back will move into midfield, often alongside the midfield pivot, to create an additional central passing option. This provides a better setup against counter-attacks, and looks to open straightforward passing lanes from centre-back to winger.

For Slot, it seems to be the last point that is most important in his use of inverted full-backs. Slot often has his right-back Jonas Svensson, in particular, move into midfield while the right-winger, often Yukinara Sugawara maintains width. We can see this movement in the image below with Svensson (yellow) inside and Sugawara (white) wide. 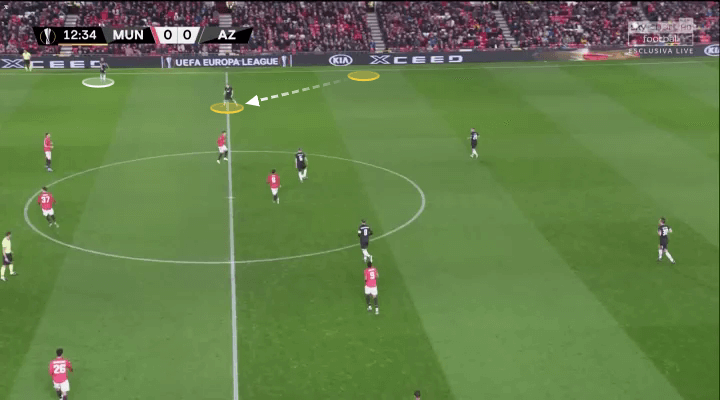 And then the image below highlights how it can look higher up the pitch with Svensson
(yellow) again centred while Sugawara (white) maintains width. 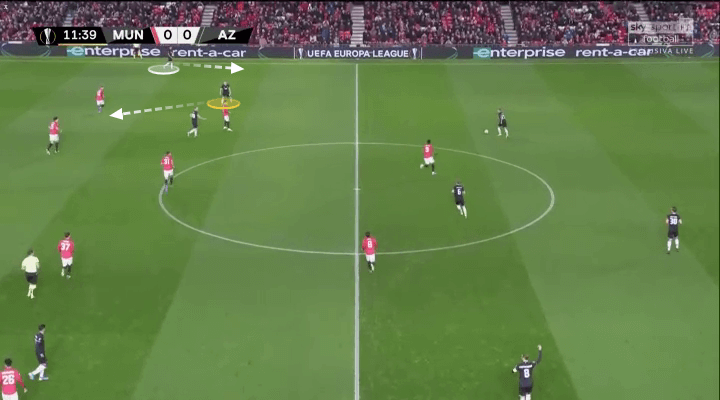 As we can see in both images above, Svensson’s movement opens up a direct passing lane
from the centre-backs out to Sugawara. This allows Slot’s team to move the ball their quicker and more easily given that Svensson will often take the opposition’s left-winger inside with him. Also, in the second image especially, we can see that Svensson moves into space between the lines of Manchester United, much higher than where Guardiola would position Lahm and Alaba.

The role played by the left-back, often Owen Wijndal, is similar yet not identical. Wijndal
often plays a more traditional full-back role but he still often moves inside for similar reasons as Svensson. Firstly, Slot often uses Wijndal to move into the space behind the opposition’s first pressing line, as seen below, to help AZ play through pressure. 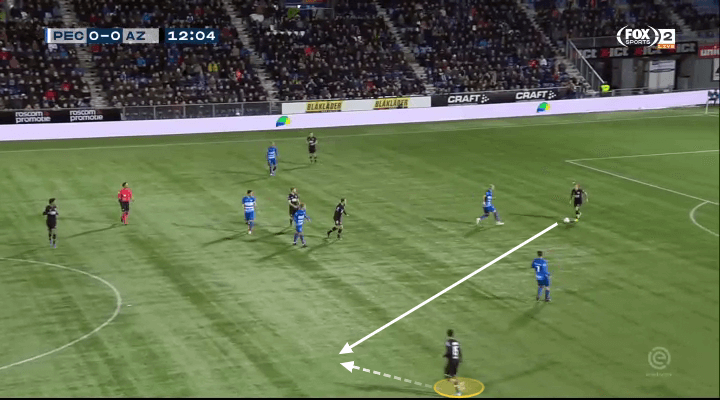 The main reason for Wijndal’s inverted movements, though, is the presence of the out-and-
out winger Oussama Idrissi on the left of Slot’s attack. Idrissi always starts wide and then
attacks full-backs at pace. In the final third, Wijndal will often overlap as soon as Idrissi has isolated the full-back and thus overload that area. We can see this in the image below. 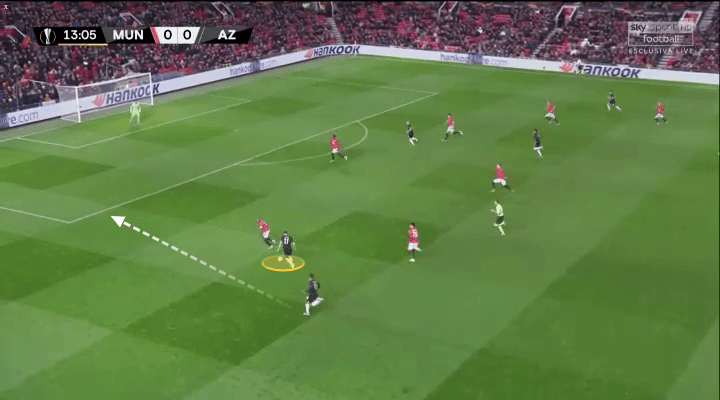 However, before the ball reaches Idrissi in the first place, Wijndal often moves inside, as
highlighted below (Wijndal in yellow), to open up a passing lane to Idrissi. As soon as the
ball is moved towards the left side of the pitch, Wijndal will move inside while Idrissi (white) maintains width. 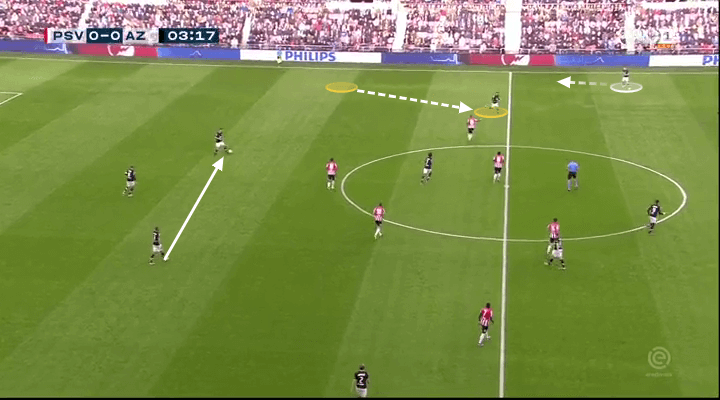 Below is another example, as Wijndal, similar to Svensson above, moves into the space
between the lines of PSV’s midfield and defence while opening up a simple passing lane for
Calvin Stengs to isolate Idrissi with the right-back. 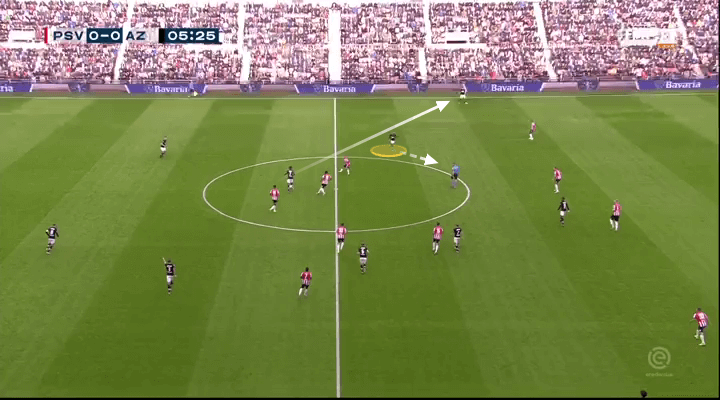 These movements are crucial as to understand Slot’s attacking setup. He seems to want his
players to constantly move, but also to balance each other’s movements. We will see more of this in the following section.

As mentioned, Slot seemingly wants a very fluid and flexible team where players interchange positions to cause confusion among the opposition. This is a very clear aspect of his attacking setup. In the image below, we can see some of the rotations that take place when Slot’s AZ look to build from the back.

Firstly, one of the central midfielders (yellow) has dropped in between the two centre-backs to create a situational back-three. Secondly, the two full-backs (white) have moved into central positions while the two wingers (one of them Idrissi, black circle) maintain width. Furthermore, we can see the number 10 Stengs having moved across into space in the left-sided half-space next to the inverted left-back. These movements have created an altogether different shape which is difficult to keep up with, especially for a man-orientated defensive team. 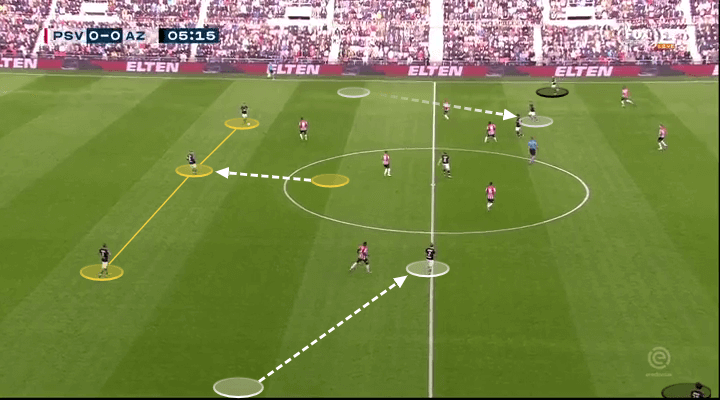 In the below scene, Svensson has moved inside while the central midfielder has dropped into the right-back slot. 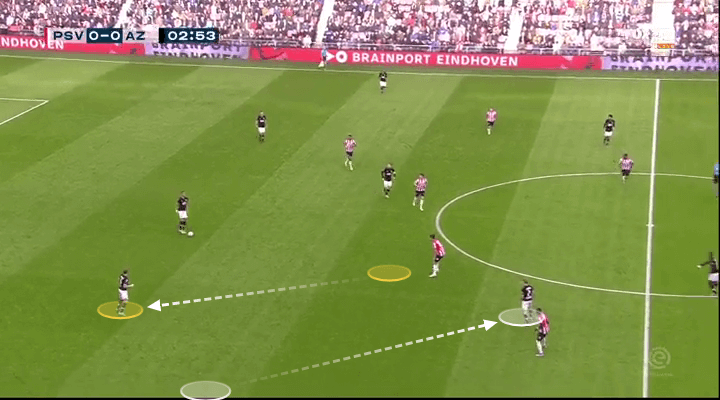 With the movements highlighted above, and those of Stengs into the left-sided half-space and the dropping movement of striker Myron Boadu, Slot’s team now set up in a situational
diamond without an out-and-out striker but with a 4 vs 2 advantage in central midfield while keeping maximum width. 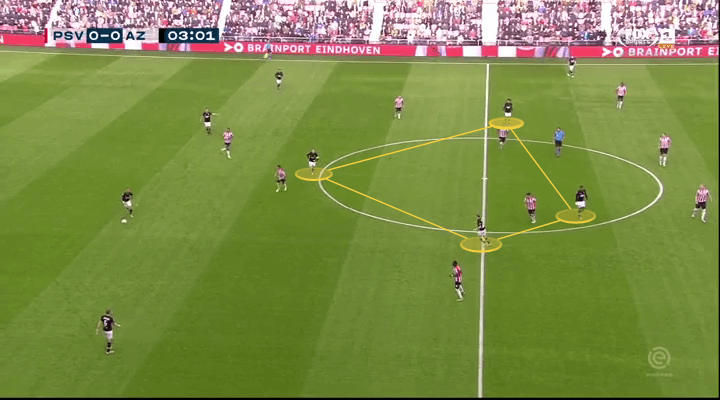 In the image below, Stengs (yellow), this time appearing as the striker, has dropped deep
while Sugawara (white) has moved in centrally to attack the space behind Harry Maguire. As a result, Svensson now appears in a more traditional right-back role by pushing very high down the wing to replace the width lost when Sugawara moved inside. 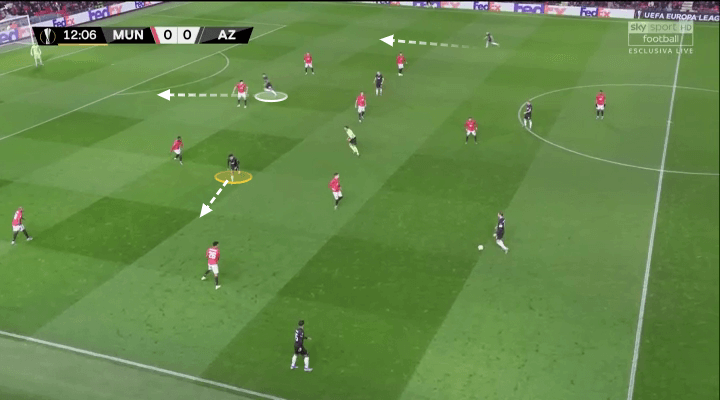 The movements in the image above highlight how well Slot’s team create presences in all the important spaces in attack; wide channels, half-spaces, in depth and between the lines.
Additionally, it shows how they balance each other’s movements, such as Sugawara replacing Stengs centrally and Svensson replacing Sugawara wide. This suggests strong work on the training pitch by Slot.

Again, the image below highlights these balancing movements. As Stengs (yellow) drops off the front, Dani De Wit (white) attacks the space in behind, dragging United’s right-back
Ashley Young with him and thus opening space for the crossfield pass to Idrissi. 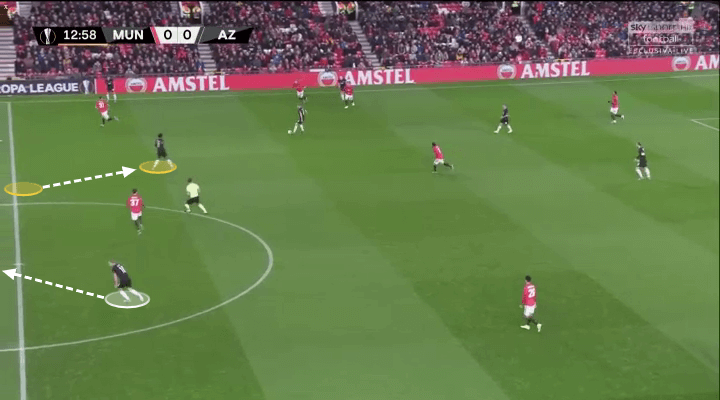 Slot’s attacking philosophy seems to be to progress the ball swiftly using third-man
combinations in central areas and quick switches of play to release his wingers in 1vs1-
battles. His implementation of these fluid positional interchanges helps in this regard since
opponents will be confused as to who they should be picking up as a right-back can suddenly appear as a number 10 while the striker is acting as a playmaker deep in midfield. It is a very complex structure to implement, but Slot is undeniably doing it well right now.

Defensively, Slot is very aggressive and implements a defensive game that involves winning the ball back quickly. This was especially evident in the game away at Manchester United when AZ really went for it and pressed United all over the pitch. The pressing schemes Slot implements are normally man-orientated, while the overall defensive setup from the middle third and back is more positionally-orientated. In particular, the front four are man-orientated in their pressing actions. As we can see in the image below, Slot commits many players to press the opponent high up the pitch in a shape that often resembles a 4-4-2 or 4-2-2-2. 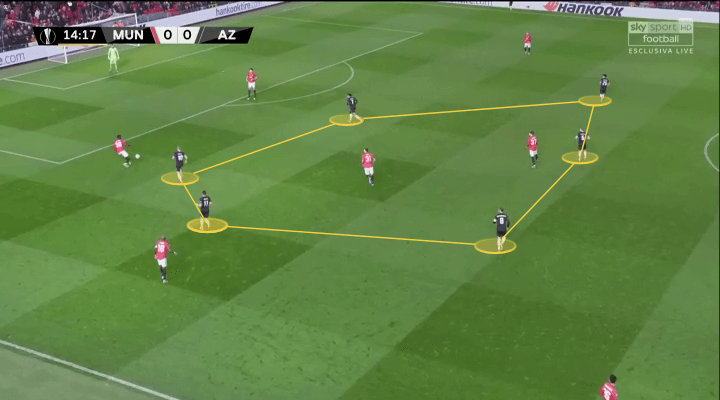 As mentioned above, the pressing is largely man-orientated as Slot wants his players to
remove simple passing options for the opposition. As we can see in the image below, each
AZ player has a direct opponent to whom they are orientated. 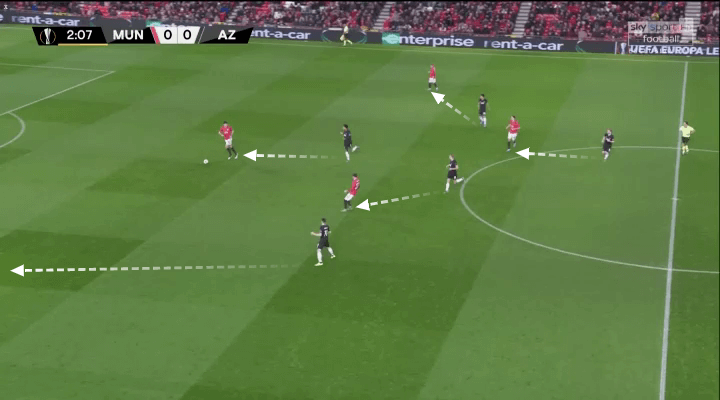 The aggressiveness of Slot’s pressing is very evident in the image below. As you can see,
AZ’s forwards and midfielders (except for no 8, Teun Koopmeiners) are marking a United player each. However, Juan Mata drops deep to provide a passing option and AZ’s centre-
back Jordy Clasie then follows the Spaniard deep into United’s half. This highlights the man-orientated nature of Slot’s pressing as he looks to remove passing options in central areas. 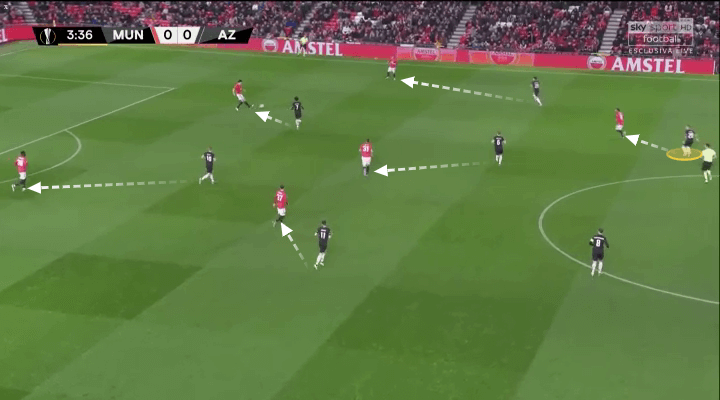 When defending inside their own half, Slot organises his team in a 4-4-2 which keeps as short distances between the lines as possible, as you can see in the image below. The defenders are constantly pushing or withdrawing the defensive line based on how the ball is moved. 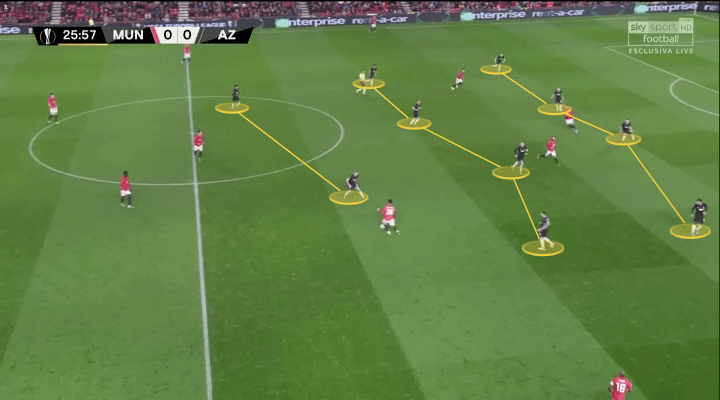 There is also a priority to push the opponent into the wide areas which means that both
wingers defend in narrow positions to create a more compact team. This has the upside of providing great counter-attacking positions when the ball is won. We can see one such
example below as Stengs has just won the ball and immediately releases Idrissi who can
attack towards goal straight away due to his narrow starting position out of possession. 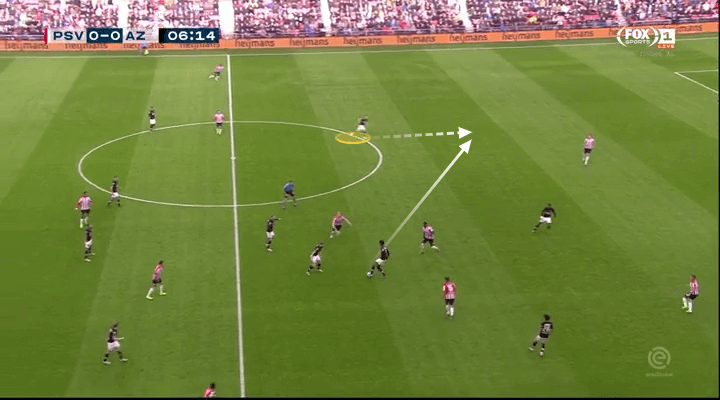 Overall, Slot’s game model seems well-suited for a long career among clubs in the upper
sections of leagues. However, one weakness to have appeared is an issue with defending
against counter-attacks. This suggests improvements must be made in how the team is
structured to prevent counter-attacks when the ball is lost. We can see this in the image below as Mason Greenwood exposes poor defensive spacing in midfield by releasing Mata in
tremendous amounts of space in midfield, catching out seven AZ players in the process. 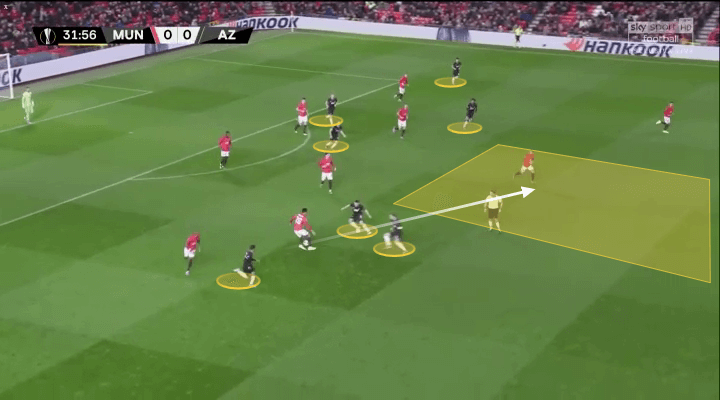 It is true that Slot commits a lot of men forward but this defensive weakness that has propped up can eventually be what makes or breaks a title race or a cup final so this part of his philosophy is something that still needs work. The stats back this up too, with AZ facing 3.43 shots per game from counter-attacks on average.

Finally, as this scout report and analysis of his tactics has shown, Arne Slot seems to be a bright coaching prospect but it is still very early in his
coaching career. If he continues to impress at AZ though, there is no stopping him getting a job at Ajax or a German club in the not too distant future. His style is attractive with
dominant football and aggressive pressing which make him seem ideal to coach at clubs
looking to dominate games and win titles. Therefore, Slot is definitely someone to keep an
eye on in 2020.