The first Milan derby of the 2020/21 Serie A season was played on Saturday and finished with quite a surprise victory for the Rossoneri. Stefano Pioli’s Milan managed to pick up a vital three points and claim bragging rights in a 2-1 victory against Antonio Conte’s Inter.

A Zlatan Ibrahimovic brace sealed the victory for the team in red and black to continue their one hundred percent record to the start of the current campaign. Inter, on the other hand, have struggled in defence this season in particular. Going forward they have been rather prolific, scoring 11 goals in their 4 league games. However, in defence they have now conceded 7 in 4.

In retrospect, they have a number of first-team members missing due to the coronavirus, including Ashley Young, Milan Skriniar, and Roberto Gagliardini, which could have been a major influence on the end result. Regardless, Conte and his men will be ultimately disappointed with the final score as they have not lost a league fixture against their rivals in the derby since January 2016.

This article will be a tactical analysis of I Rossoneri’s win over Inter. It will be an in-depth analysis of the strengths and weaknesses of both sides in their tactics, throughout the game, as well as taking a look at where each team could have improved in their set-up. 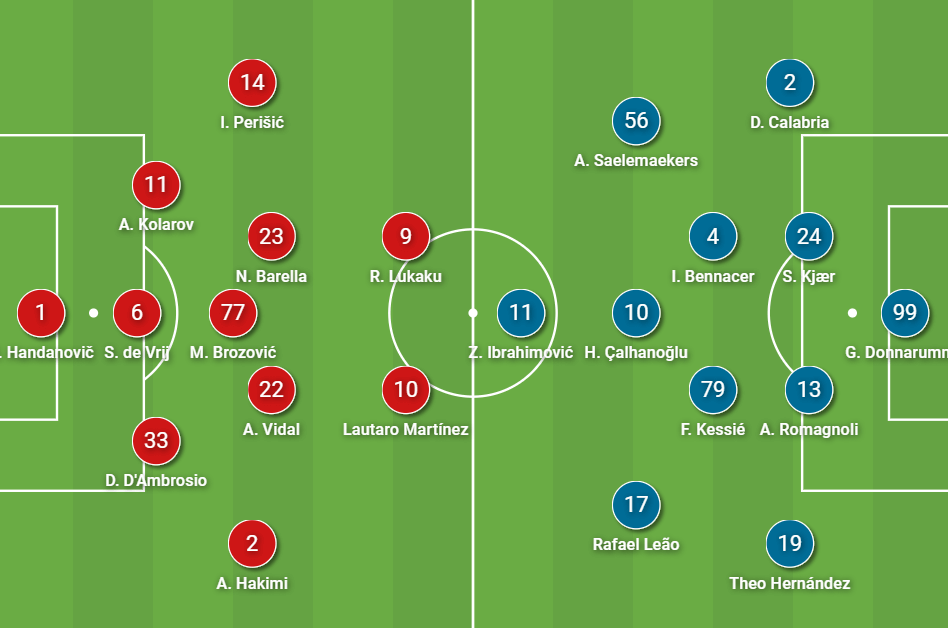 Due to a high amount of Covid-19 cases between both sides, there were some forced changes amongst both sets of teams going into this derby.

Antonio Conte deployed his typical 3-5-2 in this game, however, there were multiple changes from the side that drew 1-1 nearly two weeks ago against Lazio. These forced changes were mainly in the backline. Both Alessandro Bastoni and Milan Skriniar were self-isolating and were unable to start this game. This left Conte having to use two full-backs, in Aleksandar Kolarov and Danilo D’Ambrosio, as the wide centre-backs alongside Stefan de Vrij.

Marcelo Brozović was also reinstated back into the side as Gagliardini was ruled out for this match. He partnered alongside Nicolo Barella and Arturo Vidal who kept their places. The wing-backs and the centre-forward pairing remained the same.

For Stefano Pioli’s Milan, there were a number of personnel changes in their usual 4-2-3-1 system from their previous game against Spezia. The only change in the backline was Alessio Romagnoli replacing Matteo Gabbia.

The double-pivot in central midfield completely changed with Ismael Bennacer and Franck Kessie presuming their places instead of Sandro Tonali and Rade Krunic. Both of the latter came off the bench to feature. Brahim Diaz was also dropped in place of the favourable Hakan Çalhanoğlu, with Ibrahimovic being reinstated back into the lineup for this match in place of Lorenzo Colombo.

Under Antonio Conte, Inter very much like to build out from the back from their goal-kicks instead of playing long. The Italian manager has managed to turn Inter from a counter-attacking side into a very possession-based team with players who are comfortable at playing out from the back.

Typically, whilst in the build-up phase of the attack, Inter use 8 players, which includes the goalkeeper. This can be seen in the following image; 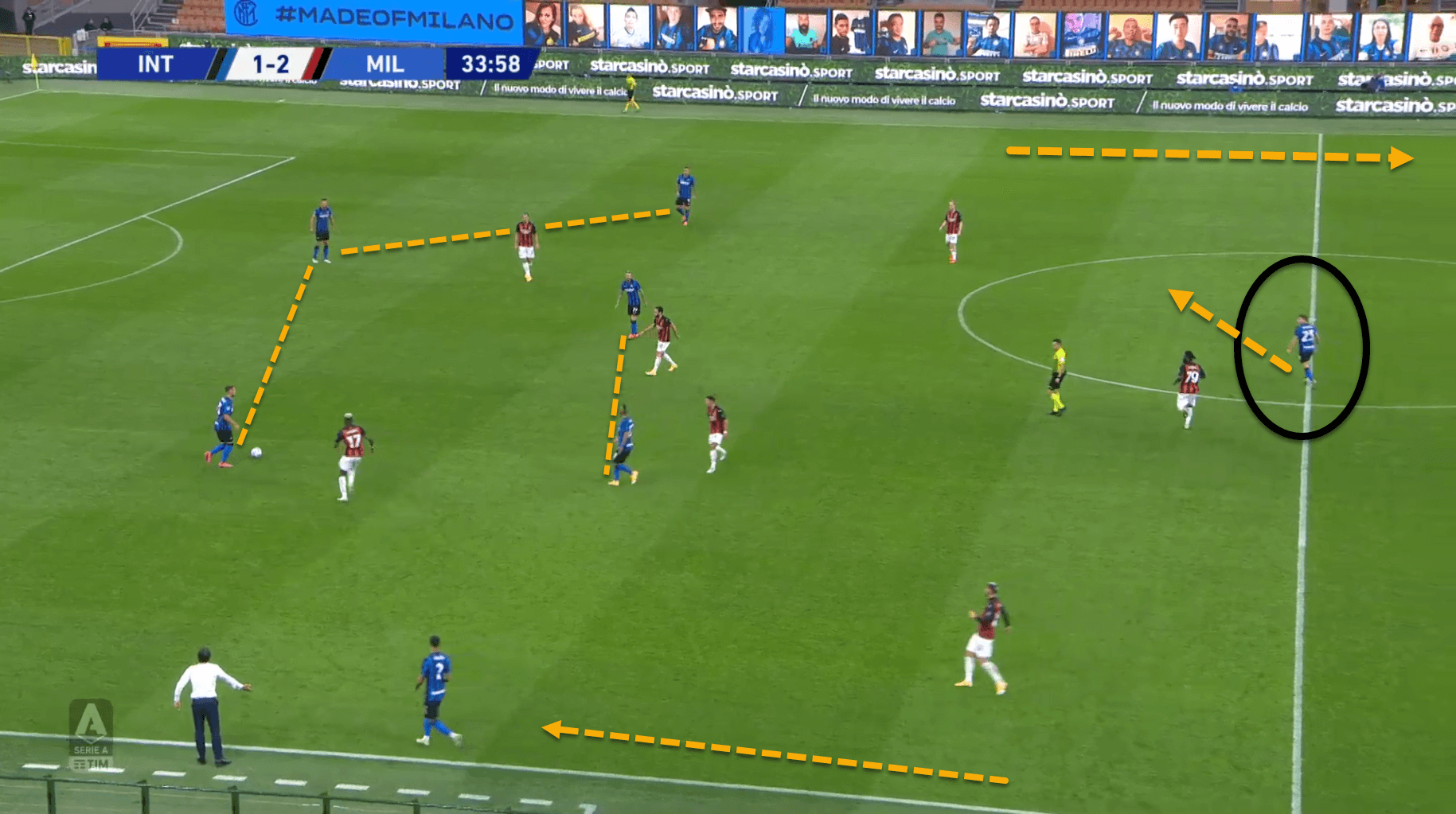 In this game, Inter deployed their usual 3-5-2, however, whilst in possession this shape looked more like a 3-4-1-2 as Nicolo Barella tended to push up behind the Milan midfield line in order to act as a progressive passing option between the lines. If he could not get the ball, he simply dropped deeper to receive, as can be seen in the above image.

Vidal and Brozović acted almost as a double-pivot staying quite close together whilst in possession in order to always have a short passing option to one-another.

The back three also stayed close together. This was because they lacked a lot of pace and so if they were caught in possession, the next centre-back would be at close proximity to cover. Conte knew that Milan would try to win the ball back and counter them as quickly as possible, so maintaining a safe distance amongst the backline limited Milan’s opportunities to take advantage of their lack of pace.

The ball-near wing-back would always drop short and help the backline circulate the ball around, looking for openings in Milan’s press. In this instance, Hakimi has dropped to act as a wide passing option. Meanwhile the other wing-back, in this case, it is Perisic, pushed very high and wide whilst Inter were in the build-up phase. This was so to act as a progressive switch of the play option to get out of danger. Another example of this can be seen here; 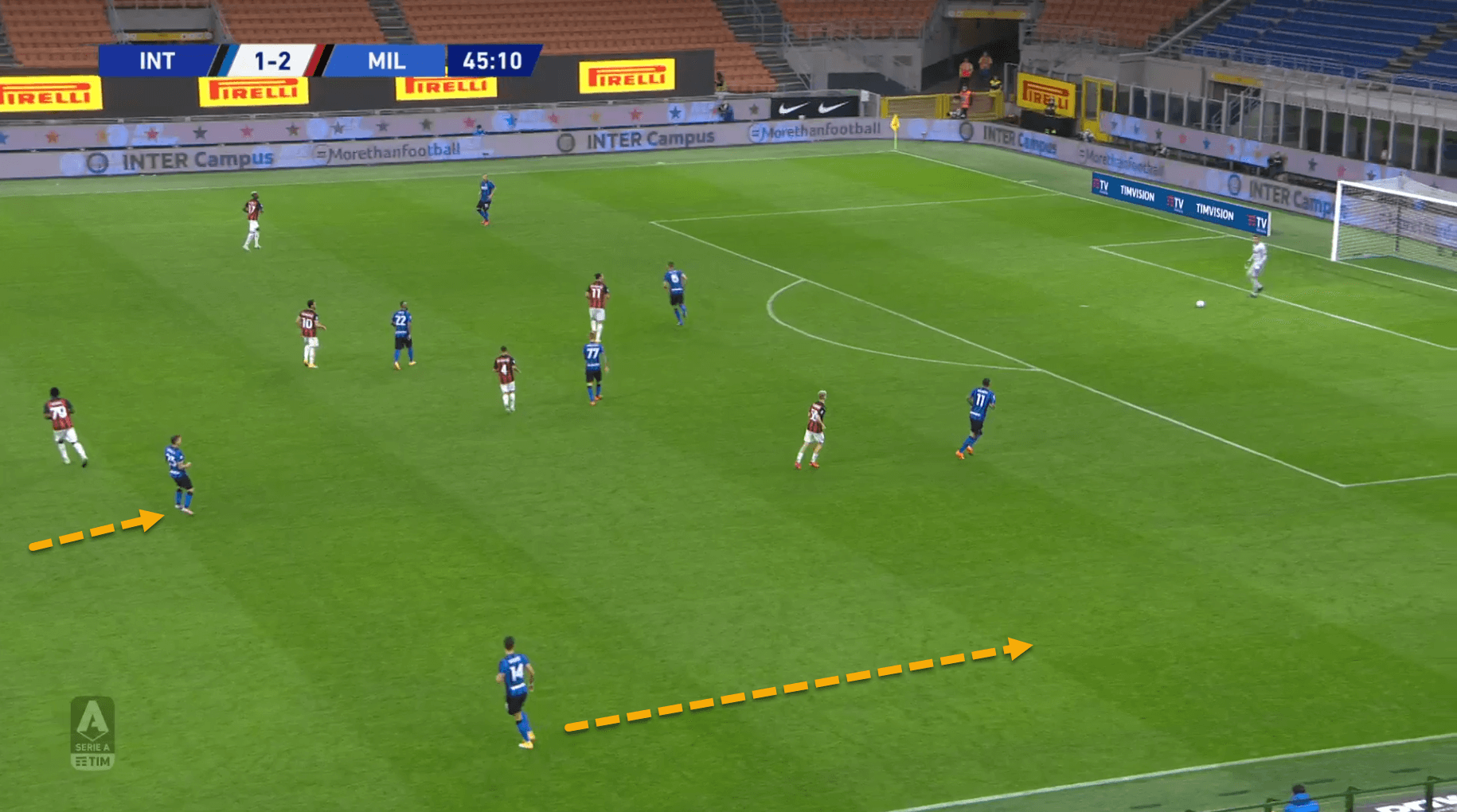 Despite having 55% of the ball possession, Inter still struggled to play through Milan’s press. This was because of Stefano Pioli’s plan to stifle their build-up play. 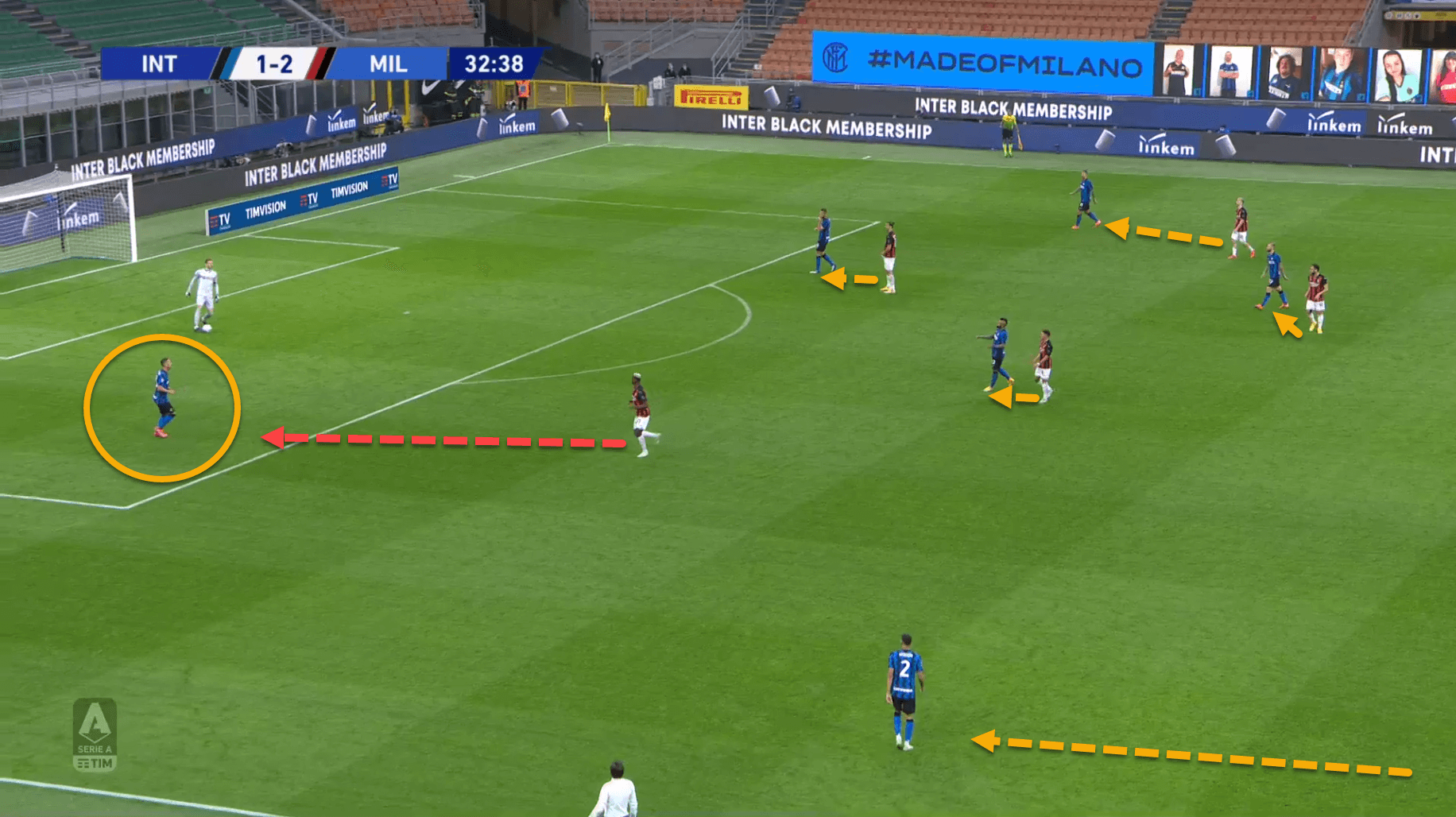 The footage above portrays perfectly how Milan looked to set-up out of possession. Pioli deployed a very tight man-marking system whilst Inter were in the build-up phase of the attack.

However, one of the most notable tactical ploys in this image is the time and space D’Ambrosio has on the ball as the right centre-back. Pioli clearly felt that the make-shift centre-back was the weakest defender for Inter on the ball.

Whilst the rest of the Inter players were being marked very tightly, Rafael Leao, who was tasked with pressing D’Ambrosio, gave the Italian a lot more space. This was to entice Inter to always play to him. As soon as Inter did play it to him, Leao would rapidly close him down and try to either force him long or else force him into making a mistake.

Hakimi was also given more space whilst Inter were in the build-up phase, in order to entice Samir Handanovic to play long to him. Once the ball was in the air, Theo Hernandez would dart to close down the right wing-back. Milan’s hope was that Hakimi would take a poor touch resulting in a turnover of possession.

As stated before, Milan did very well in the execution of their high man-oriented pressing system in this derby. They limited Inter from playing through the central areas and forced them to mainly play it out wide to the flanks if they wanted to progress, with Inter having 27 of their 47 attacks in the wide areas.

However, Inter also knew that Milan would execute a high press of some capacity, so Conte had a back-up plan to progress his side forward up the pitch and bypass this press. This plan was short and sweet; Go long.

To go long, I Nerazzurri wanted to separate Milan’s midfield from their backline in order to create massive space to play long to one of the centre-forwards. To do this, as Milan deployed a tight man-marking pressing system, Inter’s midfield tended to drop very deep. This was because they knew that their markers would follow them, particularly Milan’s double-pivot of Bennacer and Kessie. 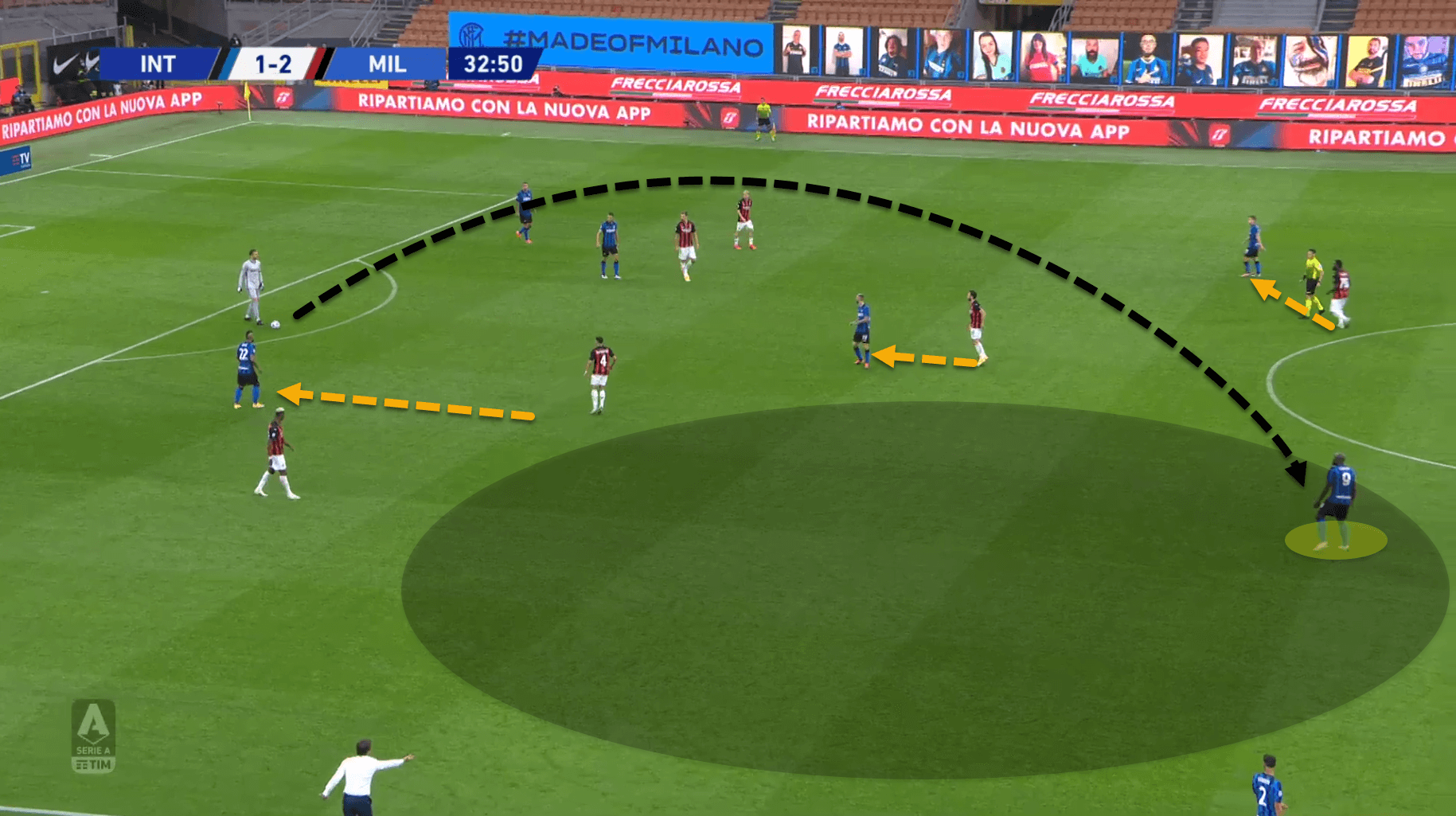 In the above image, this midfield movement can be vividly seen. Inter are in possession with Handanovic, and their three central midfielders have dropped very deep in order to attract Milan’s marking players with them. This has created a massive gap between Milan’s backline and central midfield, leaving space for Lukaku to drop into and call for a long ball from the keeper.

This exact move worked countless times for Inter. It was not always Lukaku though, at times Martinez would drop too as both were very efficient at playing with their backs to goal. The centre-forward pairing won a combined total of 63 percent of their aerial duels throughout the 90 minutes.

Whilst in possession further up the field, both of these centre-forwards would constantly look to drop deep and play with their back to goal in order to receive a pass. This was so to bring other players around them into the attack, however, it was also to drag Milan’s centre-backs out of position, leaving space to be exploited. 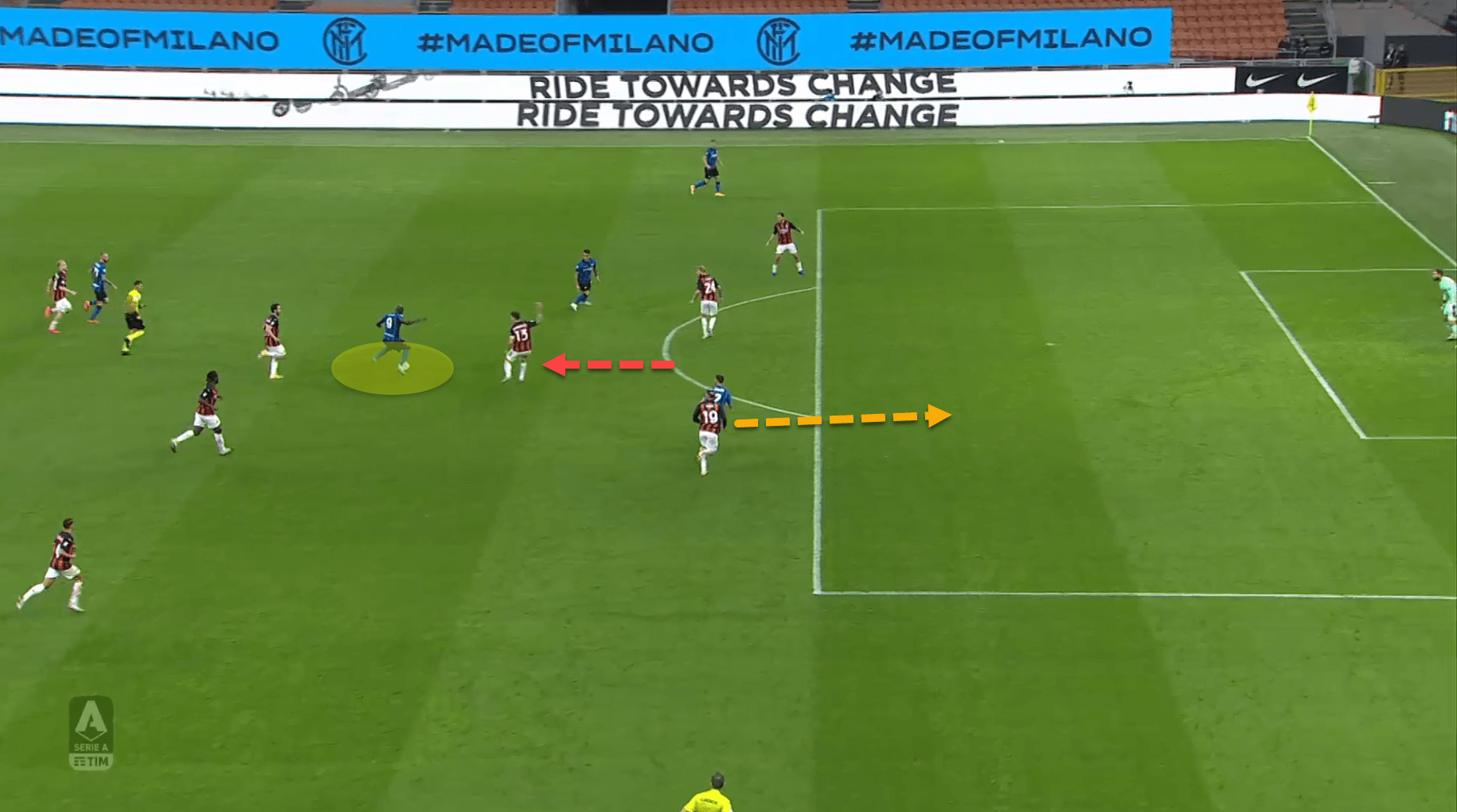 From the footage above, we see Lukaku in a deeper position in the final third. He managed to turn on the ball and attract Romagnoli to close him. Simon Kjaer, Romagnoli’s partner is attracted to Martinez who has also dropped deeper, which leaves a lot of space for Hakimi to run into and receive a through pass for a goalscoring opportunity.

Milan fell into this trap time and time again, but somehow Inter never capitalised on these goalscoring situations.

Regardless, these two strikers would predominantly only drop deeper when the ball was in the central areas. When the ball was progressed to the wide areas, as they are both quite prolific from crosses, they would look to find themselves space in the box to score from the crosses. Inter’s only goal, scored by Lukaku, signaled this brilliantly. 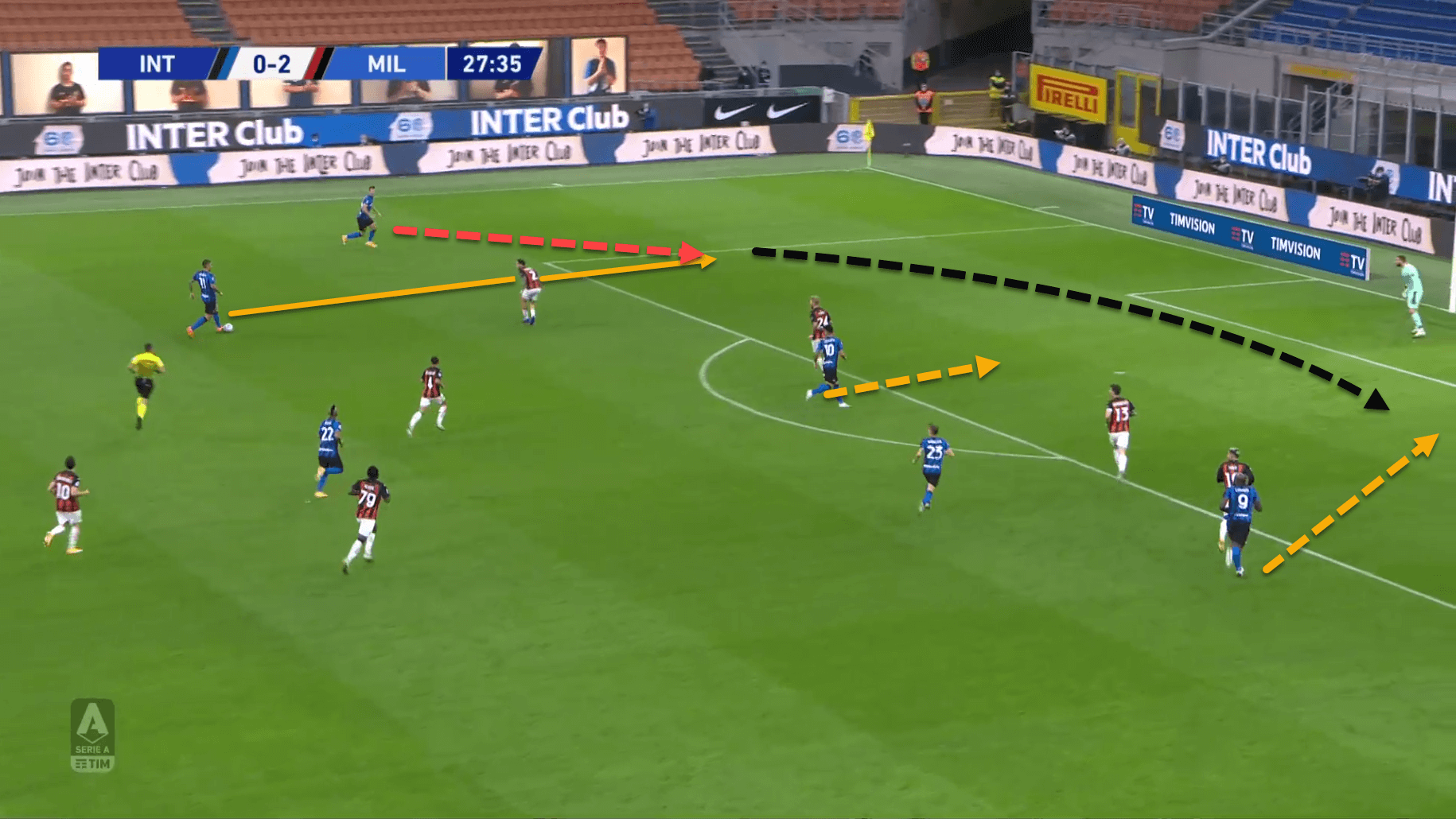 As stated before, Milan’s game-plan was simply to stifle Inter’s possession-based approach and hit them on the break once they regained possession. As they only had 45 percent of the ball possession share in this match, Pioli’s men had to be very patient in their tactical approach, waiting for the right opportunities to strike.

If Inter broke through Milan’s high press, I Rossoneri would drop off into their defensive shape which was a 4-4-1-1/4-2-3-1 mid-block. From here they would look to prevent Inter from playing through them and try hit them on the break. 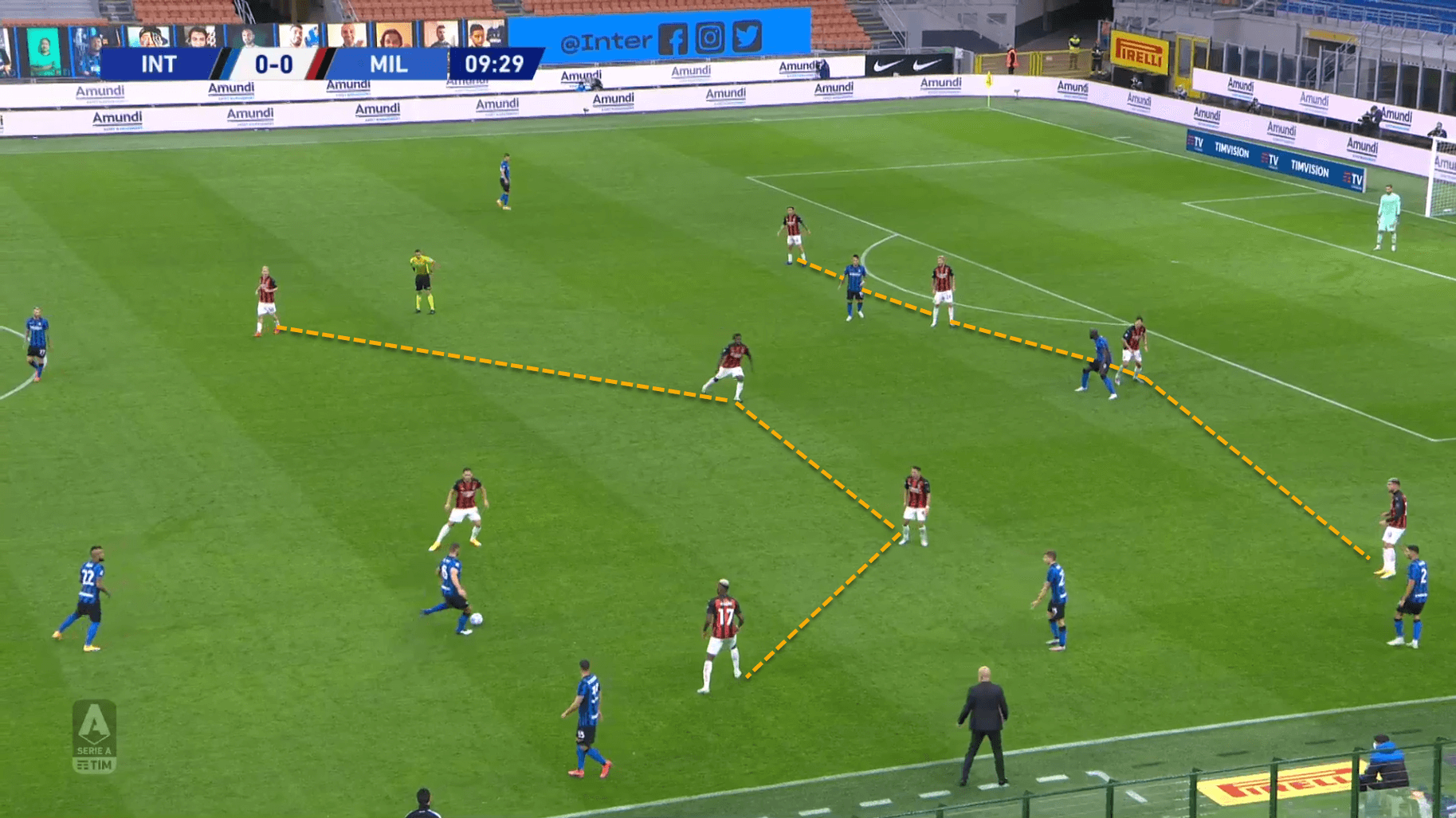 In the first half in particular, this approach worked a treat for the winning side. They managed to counterattack twice in quick succession leading to Ibrahimović’s brace in the opening twenty minutes of play.

When Milan countered, they utilised all of their front four. The movement of these front four players was quite free, however when they did counterattack, two of them had to maintain the width of the counter, whilst the other two stayed central. Two players always had to stay out wide in order to stretch the Inter defenders, allowing for gaps to be created.

It also allowed the wingers, Leao and Saelemaekers who are excellent dribblers, to create 1v1 situations with Inter’s wide centre-backs who severely lacked pace. Saelemaekers and Leao completed a combined tally of 88% of their dribbles against Inter, a truly fantastic showing from both men.

This led to both goals, particularly the second goal when Leao took on D’Ambrosio and successfully dribbled past him, before playing a beautiful ball to Ibrahimovic at the back post to slot home for Milan’s second. 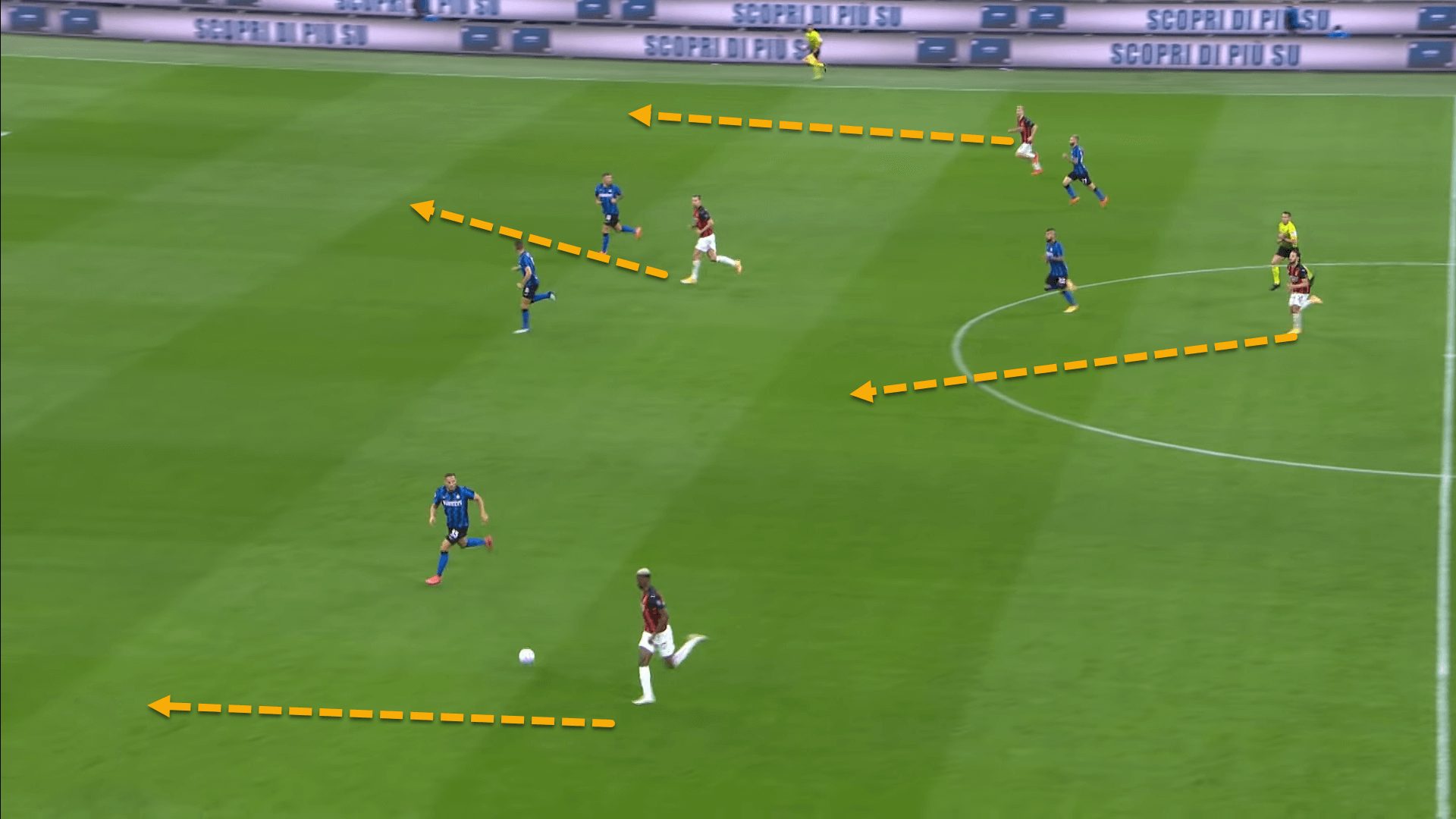 It was the counterattacking in the end which killed Inter in this game as their backline could not deal with the persistent pace and dribbling ability of Milan’s wingers.

Antonio Conte will ultimately be quite worried following Saturday’s derby day defeat at the San Siro. He will not only be disappointed due to letting Inter’s passionate fanbase down against their biggest rivals, but he will also be disappointed in how his backline performed once again. He has tampered with the backline in almost every game this season and still has not found a settled three. The Italian will need to find a solution quite quickly if Inter are to compete once again for the Serie A title.

Pioli on the other hand will be extremely delighted with his side’s performance and the fact that they maintained their 100 percent record so far this season. At the start of the 2020/21 campaign, he stated that he is aiming to get back into the Champions League this season with his team. However, one must wonder, if they continue on winning, himself and his squad may feel they can achieve even more than that.