Portland Thorns enter the 2020 NWSL campaign on of what can be considered a streak of fairly successful seasons. In 2016 Thorns won the NWSL regular season Shield with only three loses in twenty matches played, but lost in the playoff semi-finals. The squad returned in 2017 with a chip on their shoulder’s and won the NWSL championship with a 1-0 win over the North Carolina Courage. 2018 saw the Thorns make it to the NWSL championship once again, but this time lose to Courage 0-3.

Last season, saw the Thorns leading the league in points at the halfway mark but ended the campaign with their elimination to Chicago Red Stars in the playoffs. Throughout 2019 the Thorns had little problem in creating goals and finished the season with third-most in the league (40). On the flip-side defensive issues did plague the squad and saw them relinquish the sixth-most goals (31) in the NWSL.

With the 2020 season beginning in a few weeks will we see a Portland Thorns squad that will return to its championship glories of 2017? This tactical analysis will look at what we can expect.

Portland made a generous amount of substantial moves during the NWSL offseason. The Thorns announced in January that former first overall draft pick and US national team player Emily Sonnett, as well as the rights to Australian national team player Caitlin Foord, were being traded to the Orlando Pride. Orlando would, in turn, relinquish the first overall pick in the 2020 NWSL College Draft.

Within hours of this gargantuan announcement, the Thorns also announced that Midge Purce, who was a mainstay forward for Portland, would be joining Sky Blue FC in exchange for midfielder Raquel “Rocky” Rodriguez (nominated for Best Female College Athlete in the 2016 ESPY Awards) and a first-round pick in 2021.

These two trades gave us a glimpse into the mindset of a Thorns organization that is ready to take risks to retake the NWSL crown.

Day one of the NWSL 2020 College Draft brought an additional bombshell. Unsurprisingly, with the number one pick, the Thorns selected forward Sophia Smith out of Stanford University. Smith has spent time with the United States U14, U15, U17, U18, U19, U20, U23 and senior teams. She enters the NWSL as a nineteen-year-old and one of the brightest American playing prospects.

Minutes after kicking off the NWSL draft with the first pick, the bombshell was dropped. The Thorns had traded later picks and allocation money to acquire the number two pick of the draft from the Chicago Red Stars. This pick was quickly used to select another forward, Morgan Weaver from Washington state. Weaver has also spent time with various US national youth teams.

Just days ago, another groundbreaking trade was announced. Portland had acquired Becky Sauerbrunn from the Utah Royals in exchange for defender Elizabeth Ball and allocation money. Sauerbrunn possesses two World Cup titles and has 174 caps for the United States. In addition to those accolades, she is a four-time NWSL Defender of the Year winner (one of them being in 2019) and has been in the NWSL Best XI a record seven times.

This series of trades and draft picks leaves the Thorns entering the 2020 campaign as a potentially very different team.

The midfield and forward lines will have a completely new look with the addition of Rodriguez, Smith and Weaver. These three additions can be combined with the potent attacking force of US national team players Lindsey Horan and Tobin Heath. Parsons has been known to be a fan of employing high-pressure tactics when out of possession.

The drastic offseason personnel changes leave us with more questions than answers. Although, considering Parsons has a successful history we can only assume that the upcoming season will be quite exciting for fans in Portland and spectators around the globe.

Below we will dive into a few tactical strategies that Parsons regularly used throughout the 2019 campaign. We expect to see variants and enhancements to these base tactics going into the 2020 season.

Parsons has proven to be a big fan of aggressive direct play. This philosophy is fully embodied in Thorn’s counter-attacks. Upon winning the ball from the opponent, Portland players tend to look immediately upfield for a direct and decisive through-pass. As the ball carrier directs their vision upfield, Thorns wingers, forward and central attacking midfielders will make aggressive runs into space behind and around the opponent defensive line.

These attacks are meant to be executed with speed to take advantage of the opponent’s lack of defensive shape. We can see an example of this below in a match against the Chicago Red Stars last August.

Portland have just gained possession of the ball in the midfield. Within two touches, the ball is played to the feet of Purce, who is streaking forward directly into the Chicago back four. Purce drives forward and by doing so, draws in the entire Red Stars defensive line and the attention of central defensive midfielder Julie Ertz.

In this moment we can see that Portland have four players directly behind Purce. These players are seeking to occupy both the left and right halfspaces as well as the central channel. Purce’s aggressive dribble forward pushes the entire Red Stars unit back and creates attacking space for her advancing teammates. Notice central defensive midfielder Horan is currently ten to fifteen metres behind the attacking line of four.

The next six seconds help to show the aggressive attacking mentality that Parsons injects into his teams. The ball is played to the left halfspace and four Red Star players are drawn into the area. The other Portland attackers all push forward into the Red Star box.

Horan, instead of stopping and utilizing the large amount of space created in front of the Chicago 18yd box, continues her run. In the image below, Horan has continued her run, ignoring the space and the Thorns now outnumber the Chicago defenders four to three in their own box.

The ball is delivered into the box and Portland scores.

The movement of Horan conveys that Parsons situationally prioritizes aggressive attacking runs over team structure. Thorns counter-attack quickly and in numbers. If the opponent is not prepared, they will be overrun.

In calmer bouts of possession, Thorns like to advance up the flanks and create dangerous crossing opportunities. These moments vary from Portland counterattacks in that players prioritize structure and spatial allocation over aggressive attacking runs.

Below we see a match against Cascadia rivals Reign FC. Portland have advanced the ball down the left flank. By doing so, three Seattle players have bee drawn out of the central channel. This leaves Portland in a 5v6 situation in the central channel. Although this is obviously not a numerically superior situation, Thorns have staggered their players in a manner that give them positional superiority.

The ball carrier has four options as she turns inward towards goal. 1) She can shoot. 2) Central attacking midfielder Christine Sinclair can make a run in behind and attempt to receive a through ball. 3) When Sinclair makes her run, Seattle defenders will be dragged toward the goal, which will create space for Horan to receive and shoot. 4) A cutback pass can be played to right-back Ellie Carpenter, who has inverted and pushed high up the pitch.

Thorns routinely use this tactical movement and, in many crossing situations, have up to four dangerous scoring options.

The staggered positioning of the attackers also helps Portland to be in an advantageous counter-pressing situation when losing the ball. Although Parsons has allocated this high risk and high reward tactic varyingly throughout his tenure.

Typically, Thorns have favoured a 4-2-3-1 shape when out of possession. This lends itself to counter-attacking teams due to the higher position of the left and right-wingers. Upon winning the ball, the wingers are naturally in an advanced position and can quickly move into dangerous attacking space.

Although this team shape can create a mix of defensive compactness and natural attacking outlets, a few positional issues can be exploited. Because the wings stay higher up the pitch, large amounts of space are created in front of the defensive line on the flanks and half-spaces. This creates a platform of attack for opposing teams. 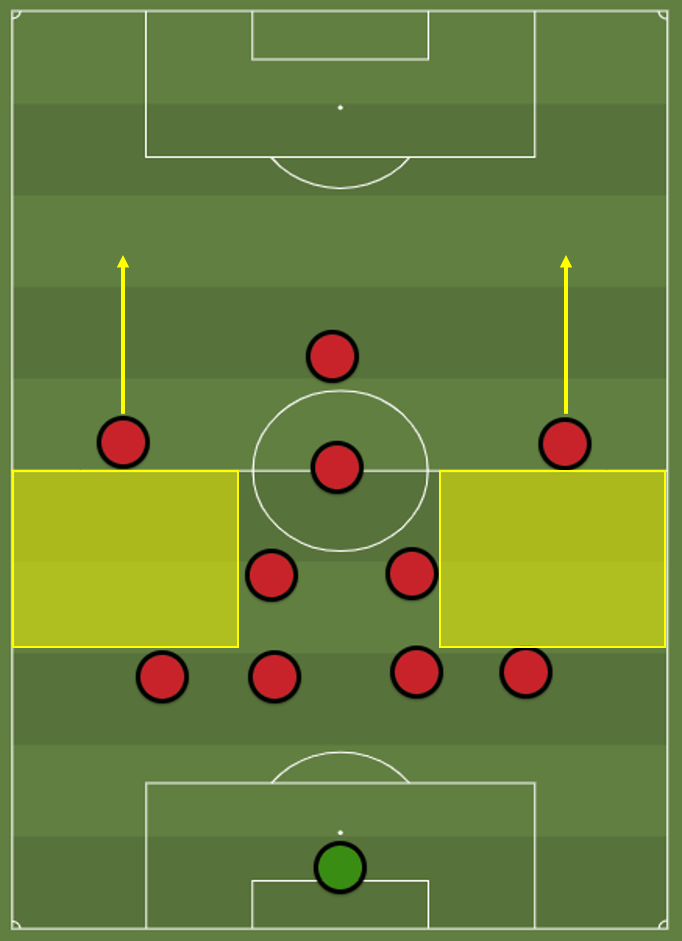 Below we see an example in a match against the Red Stars. Portland are set up in their 4-2-3-1 shape in a mid-block. Chicago has shifted the ball to their right side of the pitch. The receiving player (right-back Casey Short) has not positioned her self behind the Thorns’ midfield line of three, but directly on it. This serves to not move forward and attack but use her presence to draw over the entire Portland unit. Notice that as the entire Portland team focuses on Short and moves towards her flank, two attacking Red stars players take up space in the vulnerable area in front of the defensive line.

Once Portland has shifted towards Short, Red Stars quickly circulate the ball to the left side of the pitch to create a 2v1 situation against Portland right-back Carpenter.

We can see the same defensive vulnerability play out in the match against Reign FC. Reign have played the ball up their right side of the pitch to draw the Thorns block over. Just as the Red stars did, Reign then quickly attempt to switch the point of attack to the left flank.

In this moment, Reign left-winger Megan Rapinoe drops into space in front of the Portland backline. With this movement, she draws Carpenter with her. Reign left-back Steph Catley quickly advances upfield to create a 2v1 overlap situation.

Luckily for Thorns and unluckily for Reign, the ball is misplayed over the head of Rapinoe and Thorns gain possession. That being said, one can see that a very dangerous attacking situation could have been created if Rapinoe were able to receive the ball at her feet.

2020 looks to be an exciting year for the Portland Thorns. An influx of young attacking talent could see the squad become the premier offensive unit within the league. The addition of Sauerbrunn in the backline could offer the stability and guidance that will take the squad into the top tier of defensive units. Either way, Thorns will be one of the top teams to watch for the upcoming campaign. 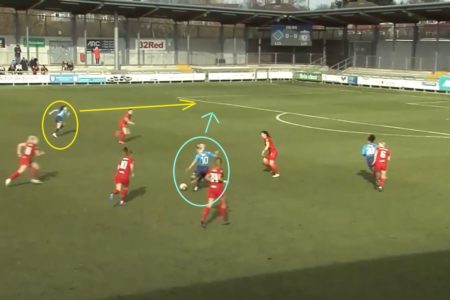 The 2021/2022 Women’s Championship season has long since finished, with Liverpool Women securing the league title and promotion back to […] 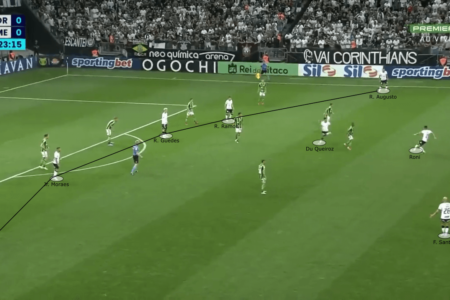 Under Vitor Pereira, Corinthians have been, if anything, inconsistent. Despite promising moments, such as their 2-0 win over Boca Juniors, […]