The final day of Ligue 1 2021/22 was very exciting. Even though PSG claimed the title very early, the second place in the league was not decided until this game. Monaco gained an upper hand with a +4 goal difference advantage, with both teams sitting 68 points.

In week 38, Jorge Sampaoli’s side faced a strong side as Strasbourg performed quite well this season, picking up 63 points and also having an eye on the European seats under the leadership of Julien Stéphan. Although things really got out of hand, Marseille were able to put four past against the opponents, not only leveling the goal difference but also climbing into second as Monaco were unable to beat Lens.

Despite this being a 4-0 win, it was not easy and the scoreline was not a fair reflection of the margin. This tactical analysis examines the positional structure and attacking tactics used by Sampaoli to explain the dynamics of the game.

Marseille mostly played with a back four recently, but Sampaoli shifted to a back three as suggested by the team sheet above. But everything on paper was just a reference, as this Marseille team showed a very good grasp of the coach’s principles of play and this was the foundation of the attack, as we would explain how they played below.

Strasbourg came with a 5-3-2 formation, which also varied to 5-1-2-2 or 5-2-1-2 without the ball and during the defensive phase, especially when the midfield three were given the license to press.

With Strasbourg defending in a 5-3-2, they did not press very high. Instead, Stéphan arranged his side to set up a disciplined mid-block to defend in the middle third, as their PPDA in the first half ranged from 28.7 to 12.8 suggested. This section would look at the positional structure of Marseille that differed according to circumstances, which helped them to obtain control of the game and created some chances in the early stages. 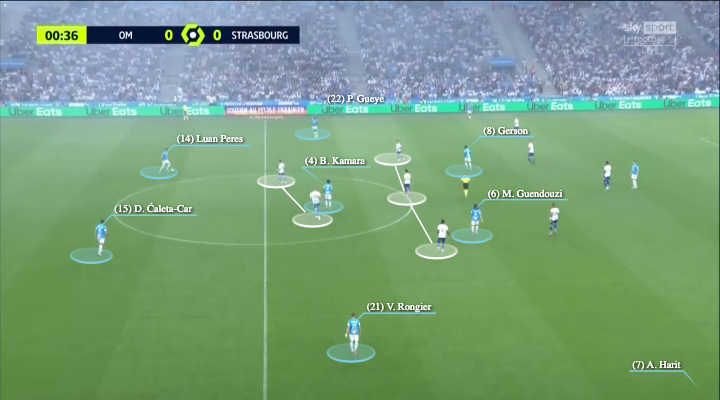 The team sheet suggested Marseille played with three centre-backs initially, but whether this was true or not depended on how they set up with the ball, as the wanted man in the summer market – Boubacar Kamara – could be flexible. In the first image, he positioned himself as a ‘6’ who stayed between the lines, so that he allowed the others in the structure to occupy other spaces, such as putting Papa Gueye in the left outside spaces, with Gerson and the former Arsenal player Mattéo Guendouzi in areas behind the midfield.

In the team sheet, Valentin Rongier was a wing-back but he was more a central player de facto, as his position in the above image suggested. The width and height of the team, instead, were mostly provided by Cengiz Ünder and Amine Harit on both sides. 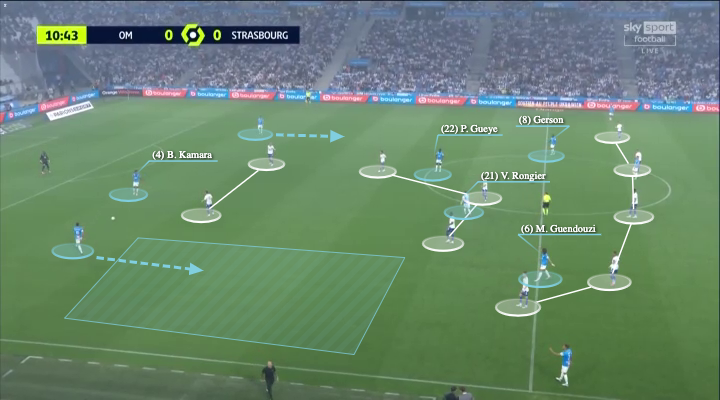 But Kamara’s position would be more optimal when he was a part of the back three, playing between the centre-backs. This would create a natural 3v2 numerical advantage in the first line against Strasbourg’s two-man chain. Then, the wide centre-backs could find spaces outside of the shape to carry the ball forward, or simply receive on the edge or behind the first line as indicated above.

To establish a dominant structure and pin down the whole defence, the rest of the Marseille players must do the job by occupying spaces between the lines. For example, here, Marseille had Guendouzi, Gueye, Rongier, and Gerson in the centre to detach the midfield line from the strikers, with the wide players pushing the last line when possible. 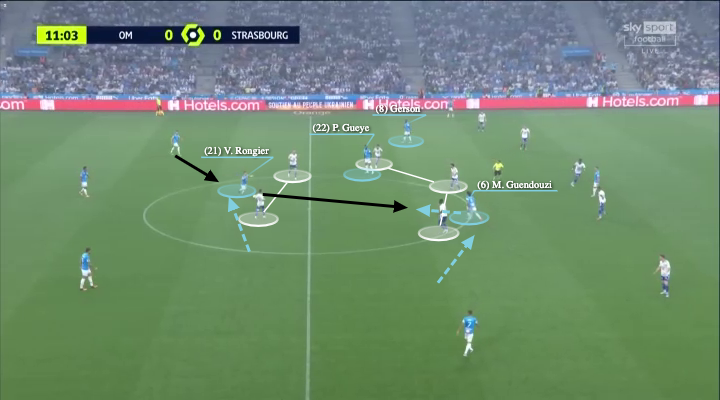 Marseille were very fluid as the players interchanged positions, but they were not losing the structure ultimately as the players knew what to do. For example, as Kamara stayed in the first line, when they needed a ‘6’, Gueye or Rongier in the above picture would be playing there, and Guenouzi knew it was not his role to play deep, so he stayed in spaces to make sure they have the occupation of spaces between the lines.

As Rongier came into the centre, he was a short option for the left centre-back, and then he would be passing forward to connect with Guendouzi. On the other side, you could look at Gerson’s position as he stayed outside of the block to stretch the shape. 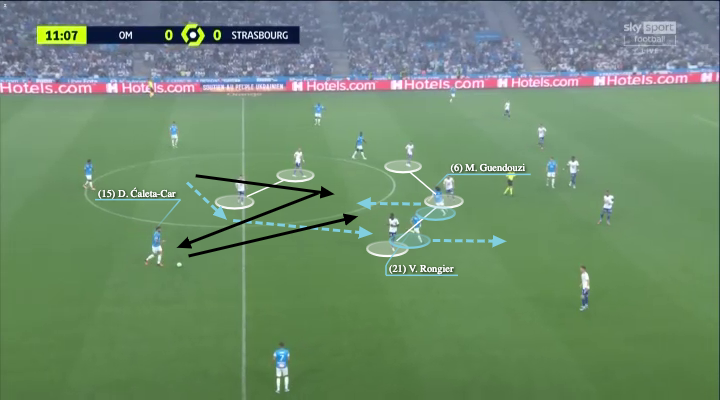 When Guendouzi received from Rongier, he was unable to turn but because many players were staying together in close proximity, Duje Ćaleta-Car was easily connected and Marseille would not lose the ball in this critical area.

Then, it was about how Rongier repositioned himself again as he no longer stayed as a 6. But where should he go? He did a great job to continue his run into the right half-spaces, because when Ćaleta-Car found Guendouzi, if the Strasbourg ‘8’ was going to close inside space with their ‘6’, Rongier would be eventually free behind Jean-Eudes Aholou.

The runs, and the first goal

Although the above section described the good positional structure with many players together to open the short passing options, it did not mean they were dogmatic at keeping possession in the midfield. Everything Sampaoli and his side worked on the football pitch, the final aim must be scoring the goal, hence, they would also be slightly direct to go behind with longer passes when the condition was created. 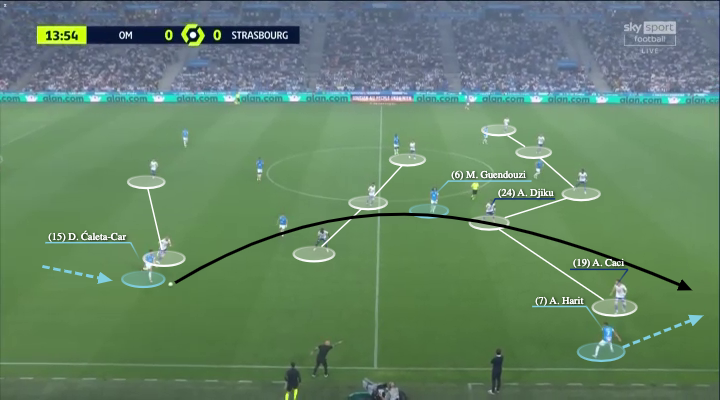 In Marseille’s structure, they had midfielders occupying pockets of spaces between the opposition players, and mostly they were behind the second line. If the Strasbourg midfielders were not covering, then it would be their defenders stepping up to close that space. For example, Alexander Djiku came out early to close Guendouzi in the spaces in the above image.

But, that also opened a gap in the last line. As the wide centre-back was out, their wing-back was isolated without close coverage in centre. When this condition was created, Marseille players also had the mindset to go behind Harit’s run, alongside the passing and ball carrying of the centre-back – Ćaleta-Car. 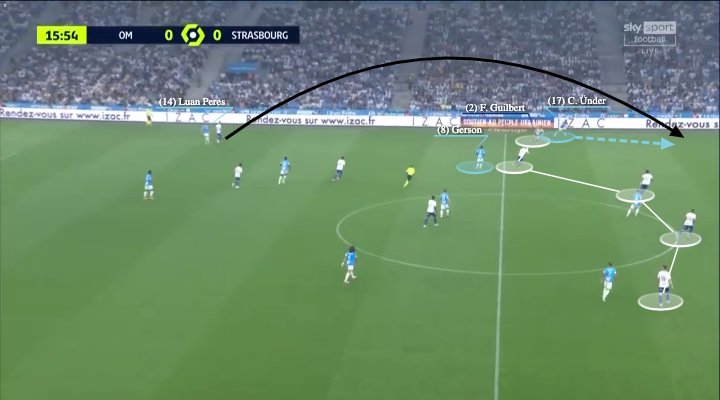 On the left side, the mindset and behaviours were very similar, they would make the same kind of efforts when the conditions were presented.

Here, given Gerson was staying in spaces, the wing-back and wide centre-backs of Strasbourg pushed higher to close spaces in midfield, and the space was opened behind the line on the flank. Hence, Luan Peres knew this was no time for short passing in the midfield if they had the chance to enter the last third, and so the pass came to find Ünder, who made the run behind based on the roles we explained. 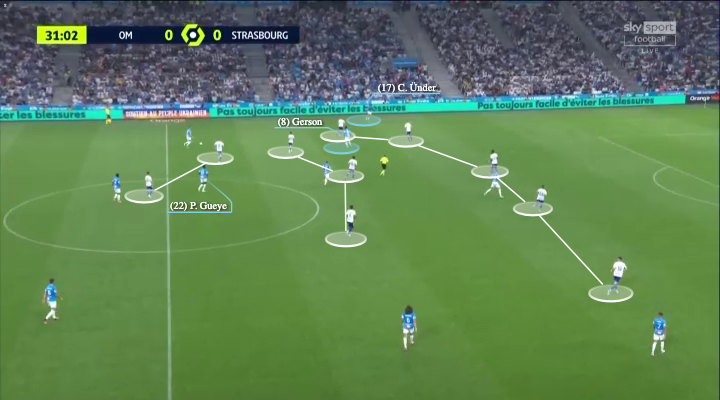 With all the explained principles of plays, the structures, the movements, and the behaviours, we were able to explain their first goal to you.

The above situation was before the first goal, as Kamara stayed as the centre-back, Gueye filled in as the 6 and Gerson stayed in space as usual, and Marseille were also with the high and wide men on both flanks. Because of the natural 3v2, again, we saw Peres having more time and space as the Strasbourg striker would be late to access him.

As a result of Marseille’s shape,  Strasbourg defence were a bit asymmetrical as they had players on their right side pushing higher to close the space. But when the wing-back was high to close Gerson, it turned out more space was given to Ünder. 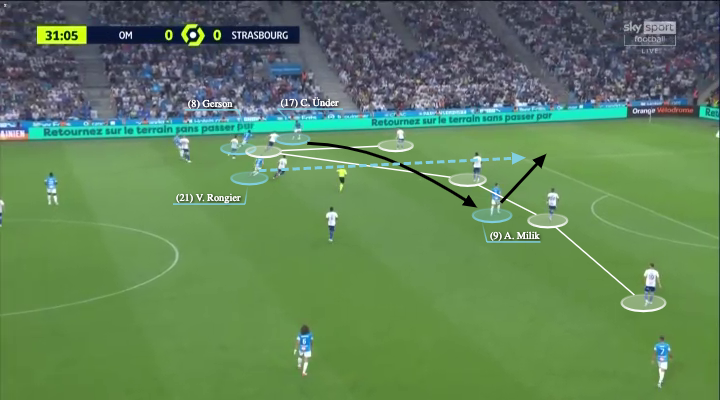 As a result of the sequence, Strasbourg right centre-back tried to shuffle across to close Ünder, but the result of this defensive action was another gap opened in the last line. Firstly, Lucas Perrin was too late to close Ünder’s angle, so the inside pass fell to Akardiusz Milik. But the catastrophic part was Strasbourg were unable to close the third man, Gerson, who entered the final third by outpacing the centre-back. Then, the ball was put into dangerous areas and damage was done.

The second half is more difficult

However, Strasbourg did not give up after being one-nil down during the break. They also wanted to be in Europe and they came out with a more aggressive approach as a team, which gave the opponents a more difficult period when it came to the ball movements in the midfield and in the build-up. 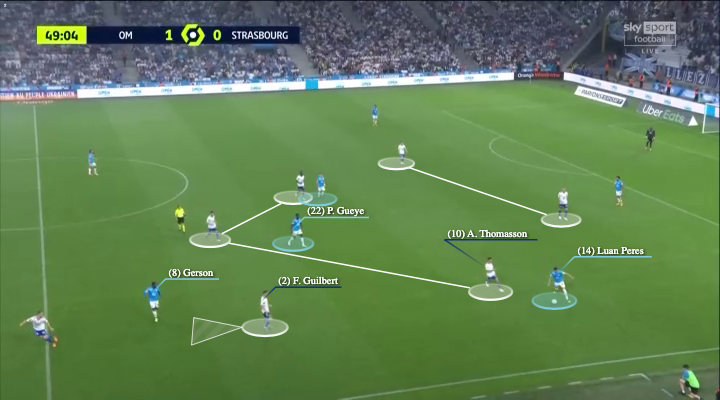 When Strasbourg returned to the pitch, they pushed the engagement line higher up with more players pressing. Firstly, they use the strikers to close the centre-backs, and the most important was to block the way back to the centre once the ball went outside, which was shown in the above image. When Peres received it, he could not return to Kamara.

Then, we also saw the Strasbourg ‘8’ coming out to press more often, and this position was given the license to go out and press the wide centre-backs. Strasbourg also set a higher block on their left side so Marseille were playing more on their right side, where the situation was more in control with Frédéric Guilbert coming out to close the advanced wide spaces earlier. For example, his position blocked Gerson in the above image which solved the difficulties in the first half. 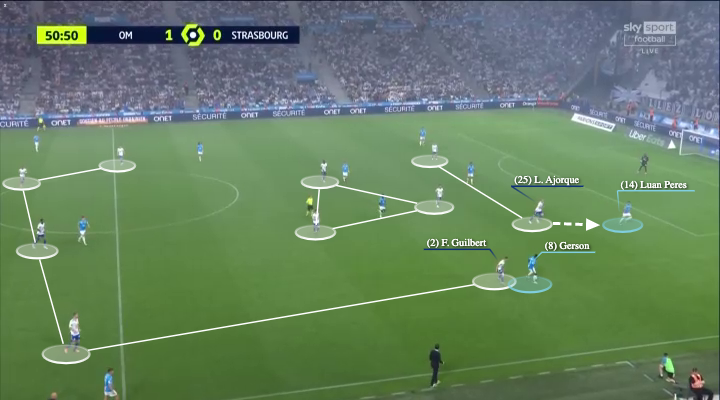 On some occasions on the left side, Marseille players were not doing well enough to open up the angles or place bounce passes to teammates quickly. Then, when Strasbourg came out to press and made contacts, they were in trouble.

Here, in the above image, as Gerson received and he did not have the angle because of the body orientation, and the pressure from Guilbert. It would be easy to use the centre-back to escape but because the Strasbourg striker’s position was too close to Peres, that passing option was not on. Also, Strasbourg locked the midfield so well that with the midfield three high and tight to support each other in a triangular shape, it was difficult to connect the short options.

But, there was also an underlying problem on this occasion as the last line might be too far away from the midfielders. 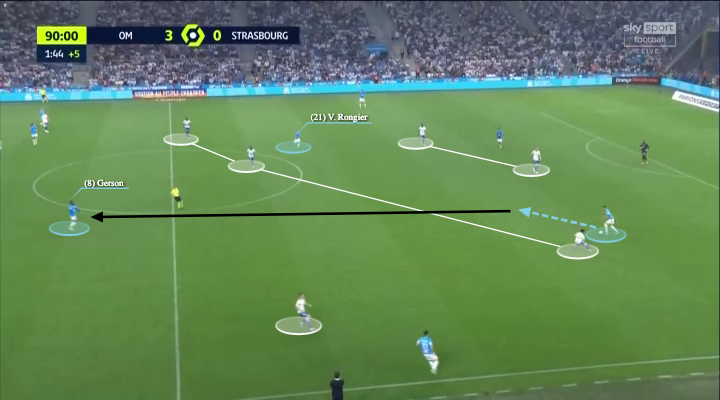 Hence, when Marseille spotted that, they used the spacing between the lines quite well once they calmed down. For example, here, the centre-back connected Gerson in spaces where he could turn and face the opposition goal. 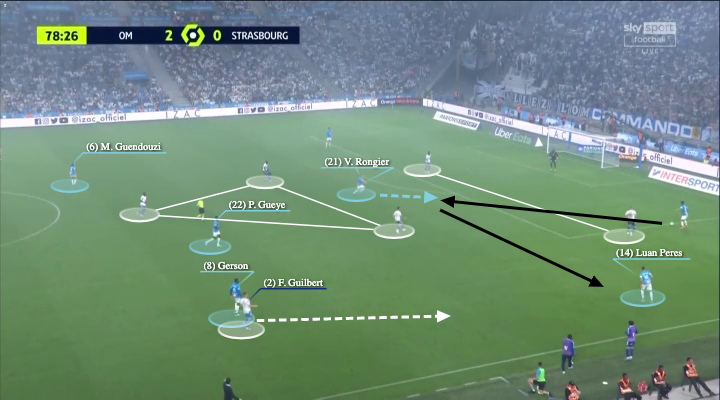 Marseille also got better with Rongier as the solution to receive and link in spaces, moving the ball around through passes or even his runs. For example, in this image, Rongier appeared as a passing option behind the first line and bounced the pass to Peres. Then, it might be obvious for Guilbert to jump as the Marseille ‘8’ was closing Rongier, but when the Strasbourg wing-backs went high, it could be a problem as both Gueye and Gerson would be behind him.

Hence, as this example has shown, the attack was on and good conditions were created because of Rongier’s lively movements.

As we have explained in this analysis, it was not an easy game for Marseille, but they worked really hard, and probably with some luck as Strasbourg did not find the equalizer when entering good positions. Then, the home side went wild and became fully confident to take the game by the scruff of the neck, putting more goals into the opposition net, marking a perfect end to their successful season.