This article represents the fifth in a six-part series on coaching team defending. This is looking at group tactics, rather than the individual, so whilst individual technique or tactics can certainly be coached if necessary during these sessions, these aren’t the main outcomes of the practices shown in this analysis.

This set of practices shown in this tactical analysis looks to develop a team’s understanding of defending in wide areas.

This session looks to initially focus in on how we should approach defending the width of the pitch with the use of our full-backs and wingers working tandem. It will provide plenty of opportunity for them to develop their understanding of working as a pair and understanding the key principles of defending on the wings. We want them to move across at speed and delay the opponent, and prevent them from being able to access the space behind them in the wide channel.

We will then progress this to allow them to see this in the context of a developed defensive phase, although the focus will still be on gaining repetitions in a relatively restricted practice, not quite moving into a phase of play. Can the central-midfielder closest to them drop into the backline if necessary to protect the space between the full-back and centre-back and prevent any through passes into this area, and track a run of any attacking midfielders into this space? Equally, we will focus on ensuring the backline drop back and adequately protect different spaces in front of their own goal.

To introduce the topic we can put our players into 2v2’s. There can be up to 8 per channel, with one pair attacking, and then next set of pair ready to attack from the opposite end as soon as the repetition before finishes. It isn’t overly important as to how this one is organised but it does need to represent a full-back and a winger attacking against a winger and a full-back, and the players need to be aware of this context.

A simple channel can be used like the one below. If you are coaching by yourself it makes sense to have the channels near each other so you can easily coach both groups, but if you have a coaching team then it would be pertinent to place both channels on either side of the pitch, giving the players the appropriate context of the situation through pitch geography.

There should be small end zones at either end, and the coach should vary how they play the pass in, either to the full-back or winger, and move around to provide different pass angles. We can see this shown below. 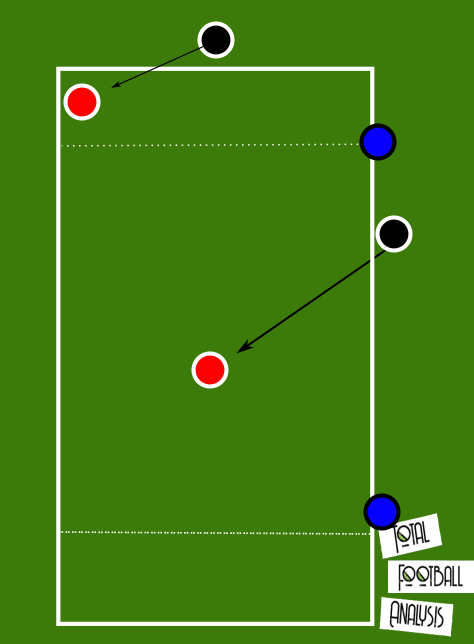 The two defenders should start outside of the grid, goal-side if using both wings, replicating a winger and full-back starting in a narrow, compact position before shifting into these wider areas to defend.

The aim of the attacking team is to preferably combine to advance possession into the end zone. This can be done with either a pass or a dribble. 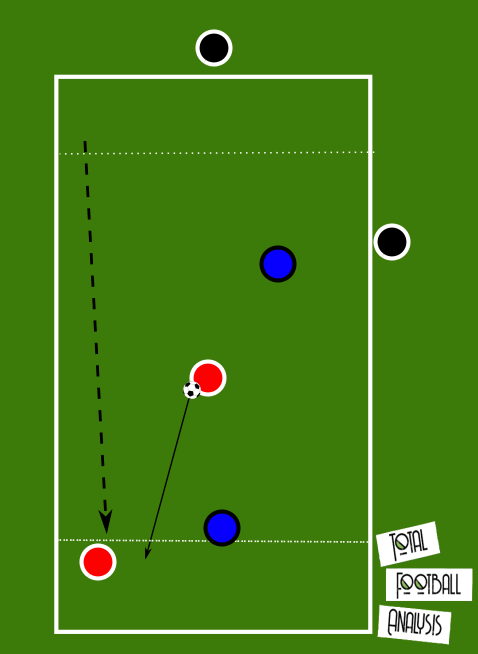 However, of course, we want our two defenders to prevent this from occurring. The defenders should be given time to find solutions, but it’s important that the player representing the full-back, aka the deepest defender of the two, isn’t drawn into a 2v1. We can see how this presents an easy situation for the attacking team in the example shown in the image below. 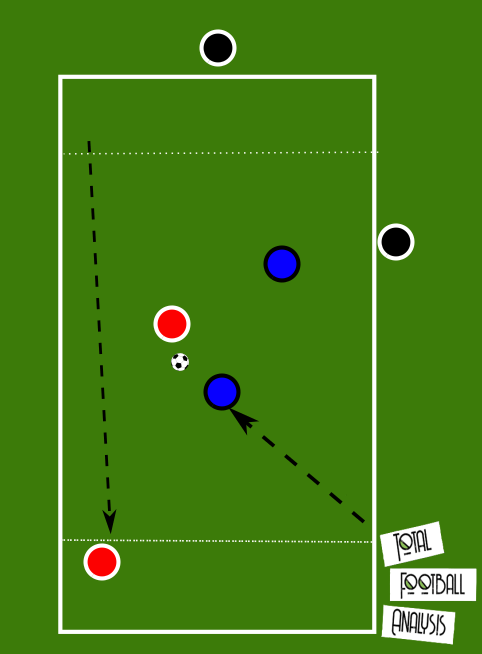 One of the first coaching points that we need to address is the impact the defensive winger can have on the attack.

If they react quickly, getting across and ensuring they get goal-side of the ball-carrier, or at the very least goal-side of the opposition full-back if they are unable to cover the opposition winger, then they can prevent the 2v1. However, they will also delay the attack, slowing the opposition duo down, and providing a greater chance for the defensive pair to win the ball, or at the very least, in a game situation, allow their teammates time to adjust their defensive shape in the central channel. 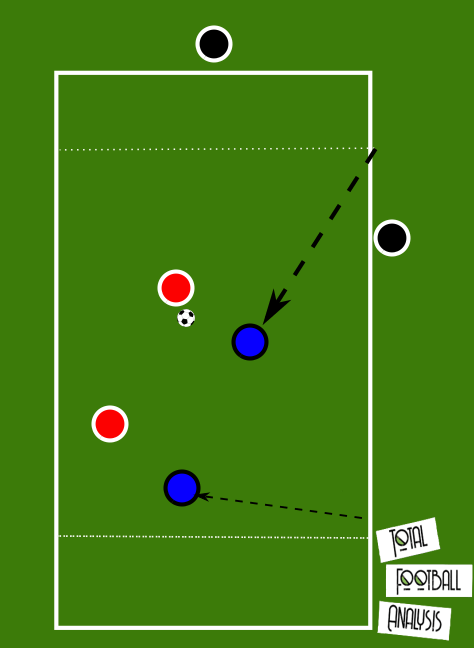 The image shown above demonstrates a run the winger can make to delay the opponent, whilst the image above shows them pressing the full-back once they have possession. Here, not only is it in their best interest to press this player quickly and delay the attack, but if the defensive pair can communicate effectively, the full-back can instruct his winger to position themselves where they can block a forward passing line. 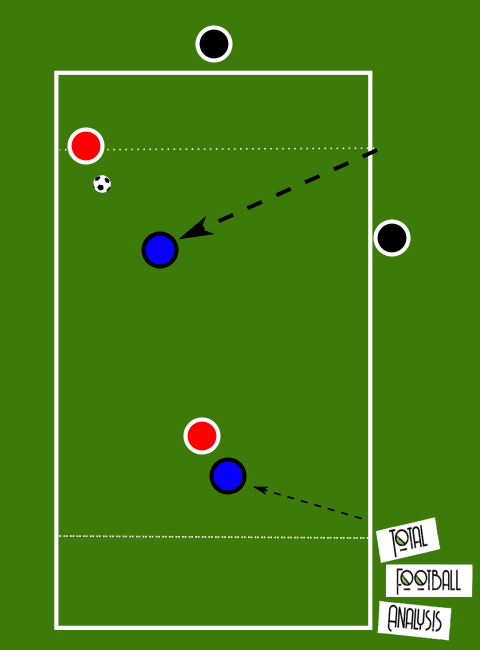 Preferably, if using the full width of the pitch already, we can move onto the next practice without to lay down any more cones – or pick any up!

We want to put this into more of a game context where, should the attacking team break into the end zone, they can now put a cross in. In the example shown I have used one forward, but working with two is of course not an issue. 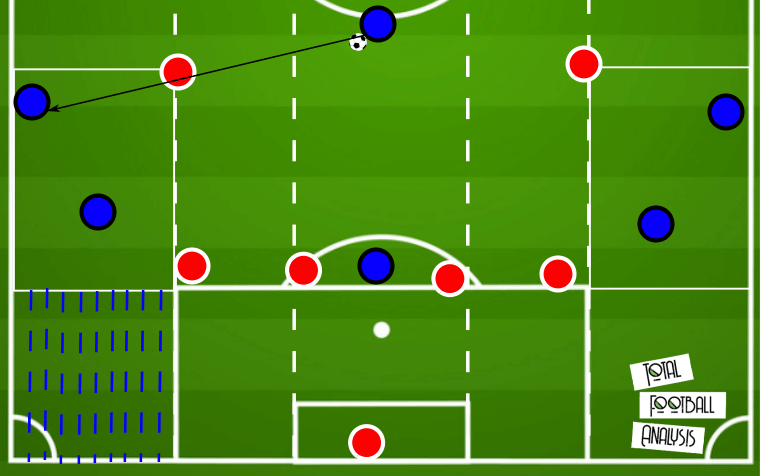 If the attacking duo can break into the end zone, highlighted in blue, can they then work a crossing opportunity.

We can see the red team’s defence reacting to this development in the image shown below.

Note how they all move closer to the ball, and we want them covering the front and back post and the central area of the goal too. This means the far-side full-back needs to show a quick reaction to move back but also attempt to get inside the back post. 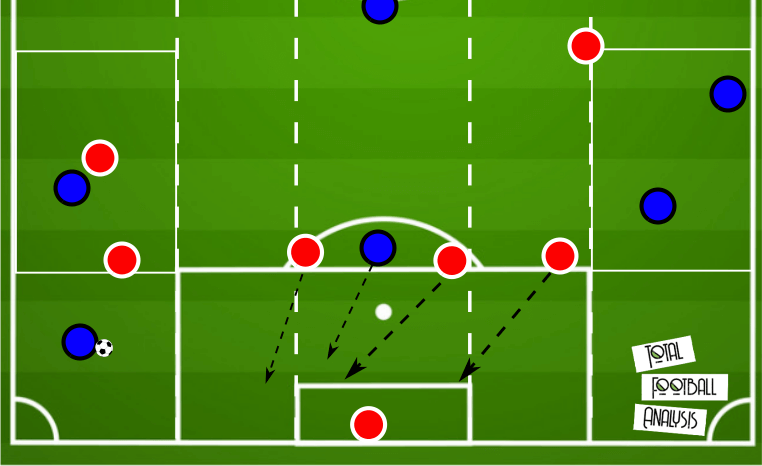 As soon as one attack has occurred from one wing and the defence is back in their starting position, the ball can be played to the other wing and the practice can be replicated from the other side.

A progression to this practice is to introduce two central midfielders for either side.

Without prompting, we want to see the defensive team’s central midfielder dealing with this run by shifting into this space along with the attacking midfielder to cover any through pass played in behind. 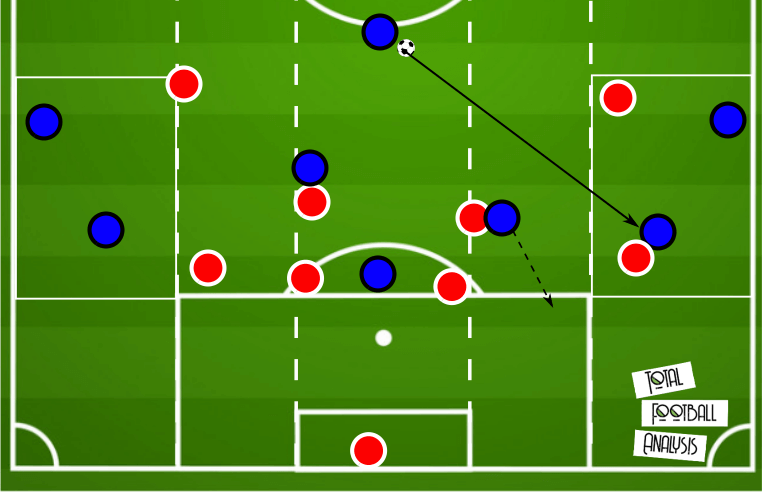 The wide channels can be taken out and we can have our defensive team simply look to apply the principles of defending within five channels that have been so prevalent throughout this coaching series on defending, as seen in many practices in the previous four articles in this series.

We can now move onto an 8 v 8 phase of play with two mini goals for the defensive team to seek to access with a pass once possession is turned over.

The defensive team will continue to be asked to defend within three channels and preferably the wingers and full-backs shouldn’t move into either wide channel until the ball has been moved into this area of the pitch.

Should they get stretched over more than three channels and the attacking team gain success in playing centrally, we need to address why this is an issue. By forcing the opponent out wide, we force them away from the goal and make it more difficult for them to forge an attacking opportunity if we defend correctly. 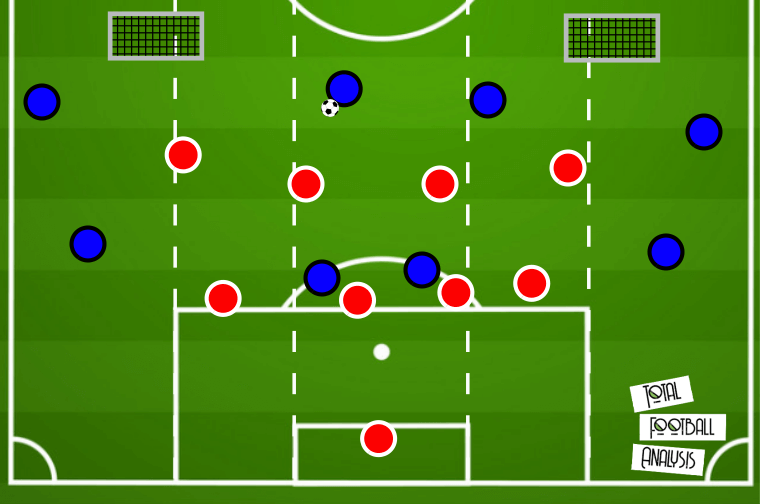 As the ball is played wide we will continue to look for our midfielders to protect the space in between the full-back and centre-backs, particularly if the opposition look to thread through passes into this area of the pitch.

As the ball is played wide, can the winger get across and delay the attack, supporting their full-back as much as possible? 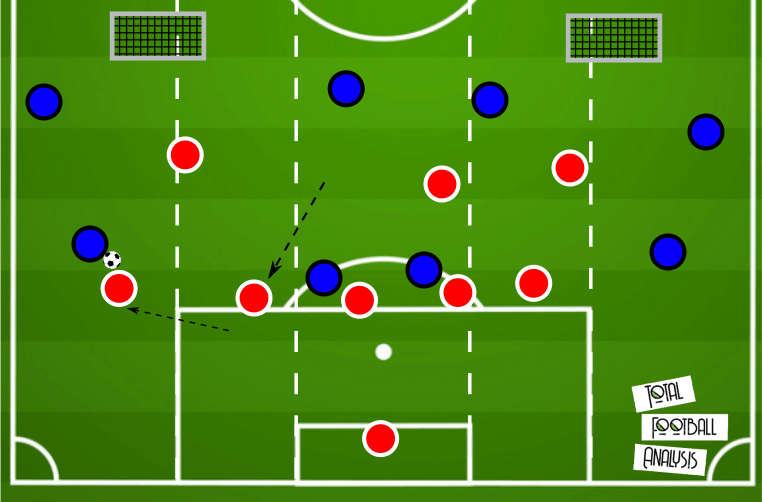 Finally, as the ball is out wide, can the far-side full-back tuck inside, getting as close to being inside the back post if possible, whilst keeping an open body orientation, as shown in the image below. The far-side attacking winger should be encouraged to be aggressive in attacking the back post, and force the full-back to take a good defensive position where they can easily see the ball and the run of the winger on their blind side. 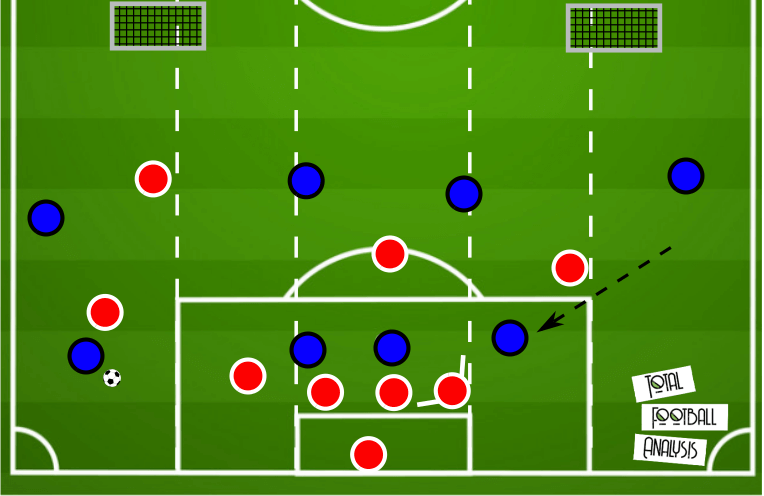 We are looking for the backline to replicate their positioning from the previous practice and deal effectively with the cross coming into the area, clearing the cross before it bounces, and pushing forward as soon as any clearance is made, leaving any straggling attackers in an offside position.

This set of practices takes us through three stages of moving our defensive work from an isolated practice into a fully-fledged phase of play practice where the winger and full-back can put their learning into practice through the context of a game situation, whilst the tactics of the rest of the defence, as well as the central-midfielders, can be fine-tuned to support the approach of their wide players.