Joao Felix: Why the Portuguese is the perfect player for Chelsea’s short-term plans – scout report

Premier League club Chelsea have officially signed Joao Félix from Atlético Madrid. The Portuguese international joined Stamford Bridge on loan for the remainder of the season. The weakening club from London needs more power, especially in the attack. The lack of goal threats is the main reason why Chelsea are currently only a mid-table club in the English Premier League.

Félix has recently appeared less frequently for the Spanish capital club. However, his contract does not expire until 2026. A poor form combined with injuries led to a bad start at Atlético Madrid. But, Félix won Atlético’s Player of the Season Award last year. In 2019, Félix moved from Benfica to Spain for approximately 127 million euros. In England, the 23-year-old should be given the opportunity to demonstrate his talent more often and to justify the high transfer fee paid almost four years ago.

In this tactical analysis in form of a scout report, we will figure out Joao Félix’s main strengths and weaknesses. Also in this analysis, we take a look at his role at Atlético and how he might be used in Graham Potter’s tactics at Chelsea.

Joao Félix is known as a very creative player who can play various positions in the attacking line. In his career, he has been used as a winger, striker and central attacking midfielder. His best-suited player role is being a shadow striker.

Shadow Strikers are primarily involved in making short passes to teammates and often into the final third. They also register at least a moderate level of shots from outside the box on average but are not regularly involved inside the penalty area. Pressing the opposition high up the pitch is rare for this type of player in favour of more offensive contributions in possession. 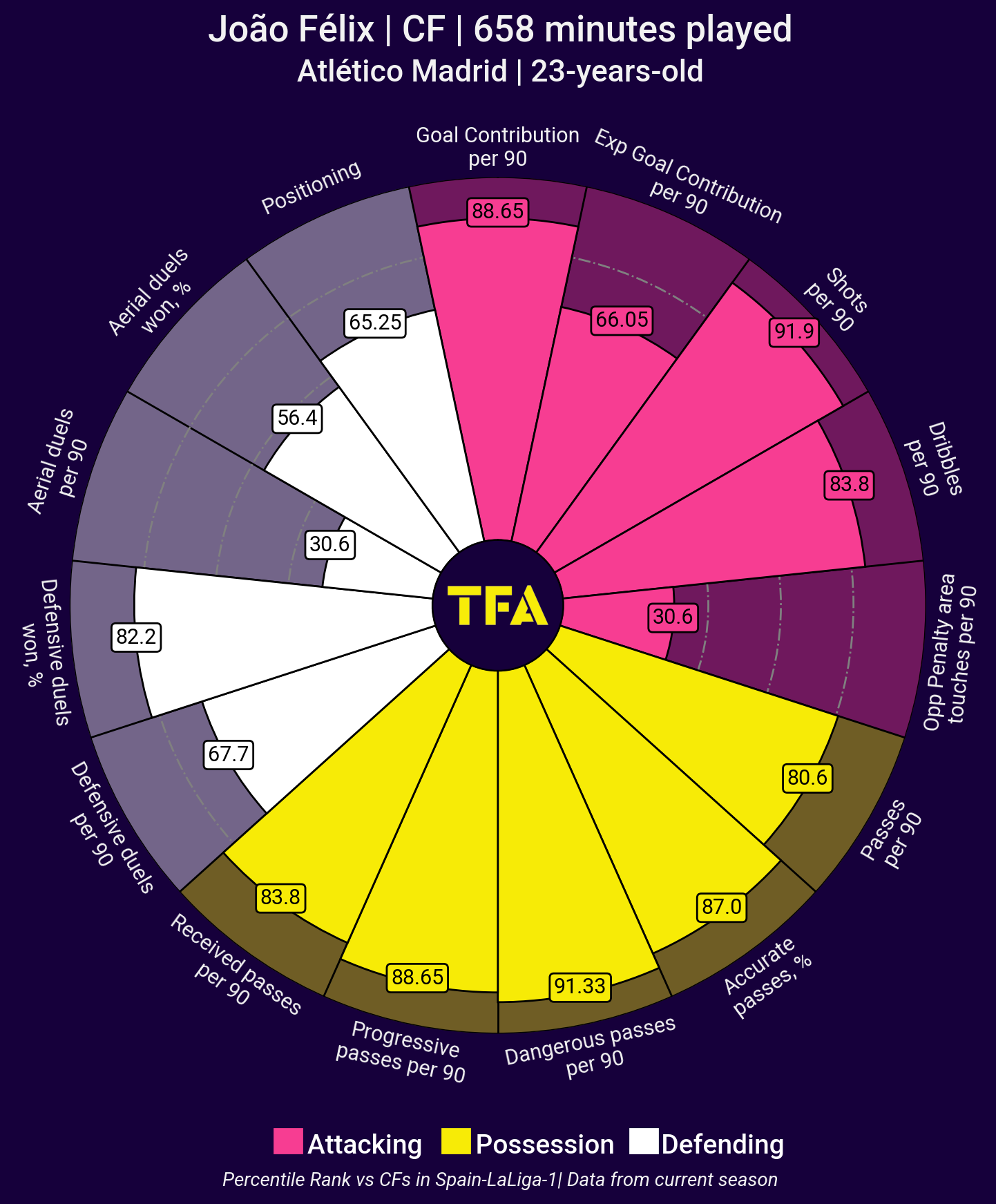 Félix played as a left forward in various two-man striker formations for Atlético. Most of the time, they played in a 4-4-2 formation or in a 3-5-2 formation. Therefore, Félix was often paired with striker partners who had contrasting qualities. To name some of them: Alvaro Morata, Luis Suárez and Diego Costa. Recently, Félix played on the left wing in a 4-3-3 system for Portugal’s national team at the 2022 World Cup in Qatar. 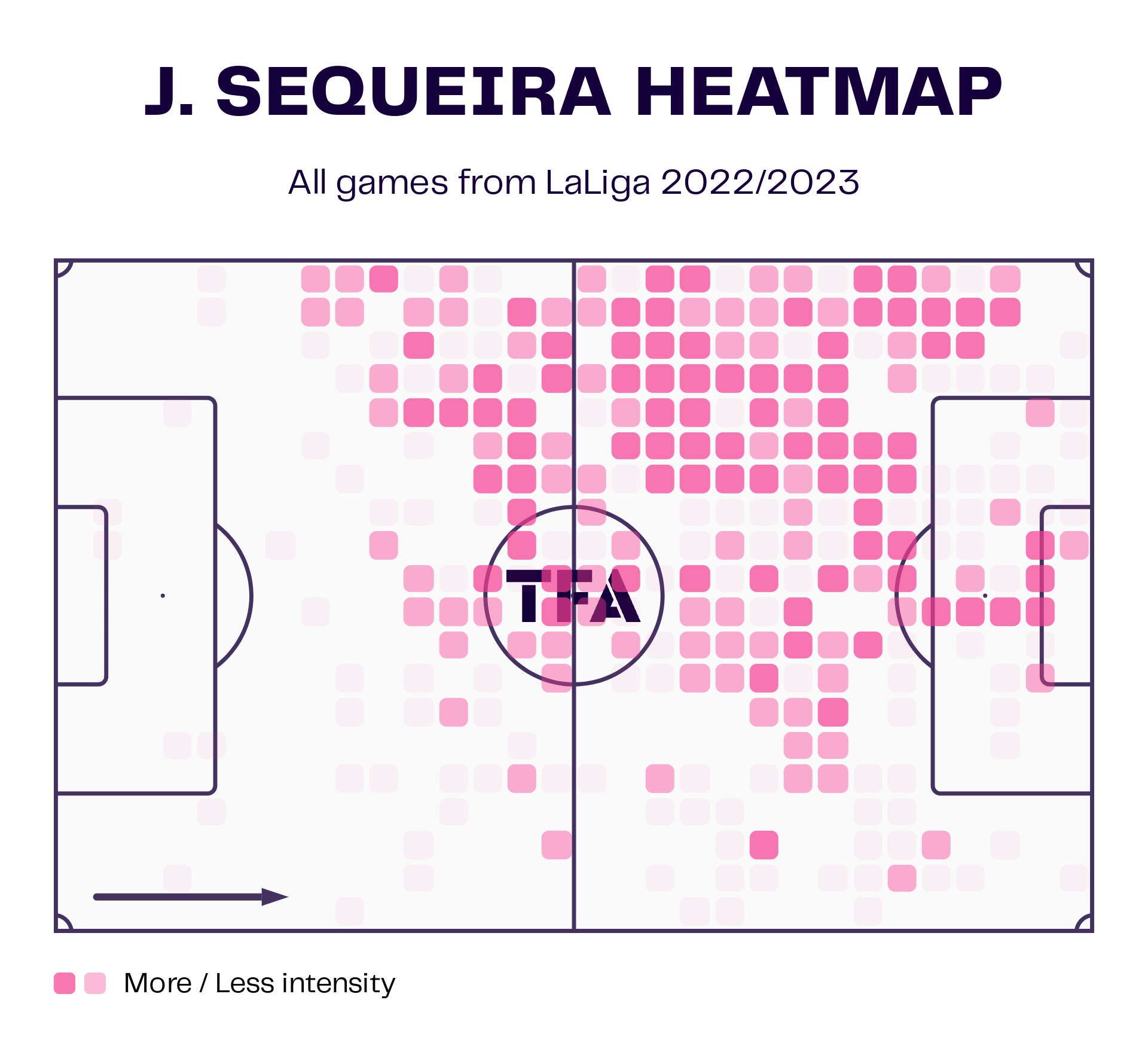 Félix can be seen guilty of not doing justice to his prodigious talent with prolonged spells of underwhelming performances. He has improved in the last season. But considering his immense skillset and talent, he has to be more consistent in his match-winning presence.

Félix is not injury prone as such but misses an average of one to two matches with minor injuries. He has also once played matches with a fractured foot. This eventually ruled him out for two and a half months back then. With Chelsea’s current injury curse and lack of attackers, Félix has to stay fit.

The best role for Félix at Chelsea is in a system with two strikers. This will allow him to roam, pick spaces and link the midfield to the attack. His partner should be a traditional striker to whom he can play and assist. On his debut last week, Chelsea manager Potter used him in a 3-5-2 paired with Kai Havertz. 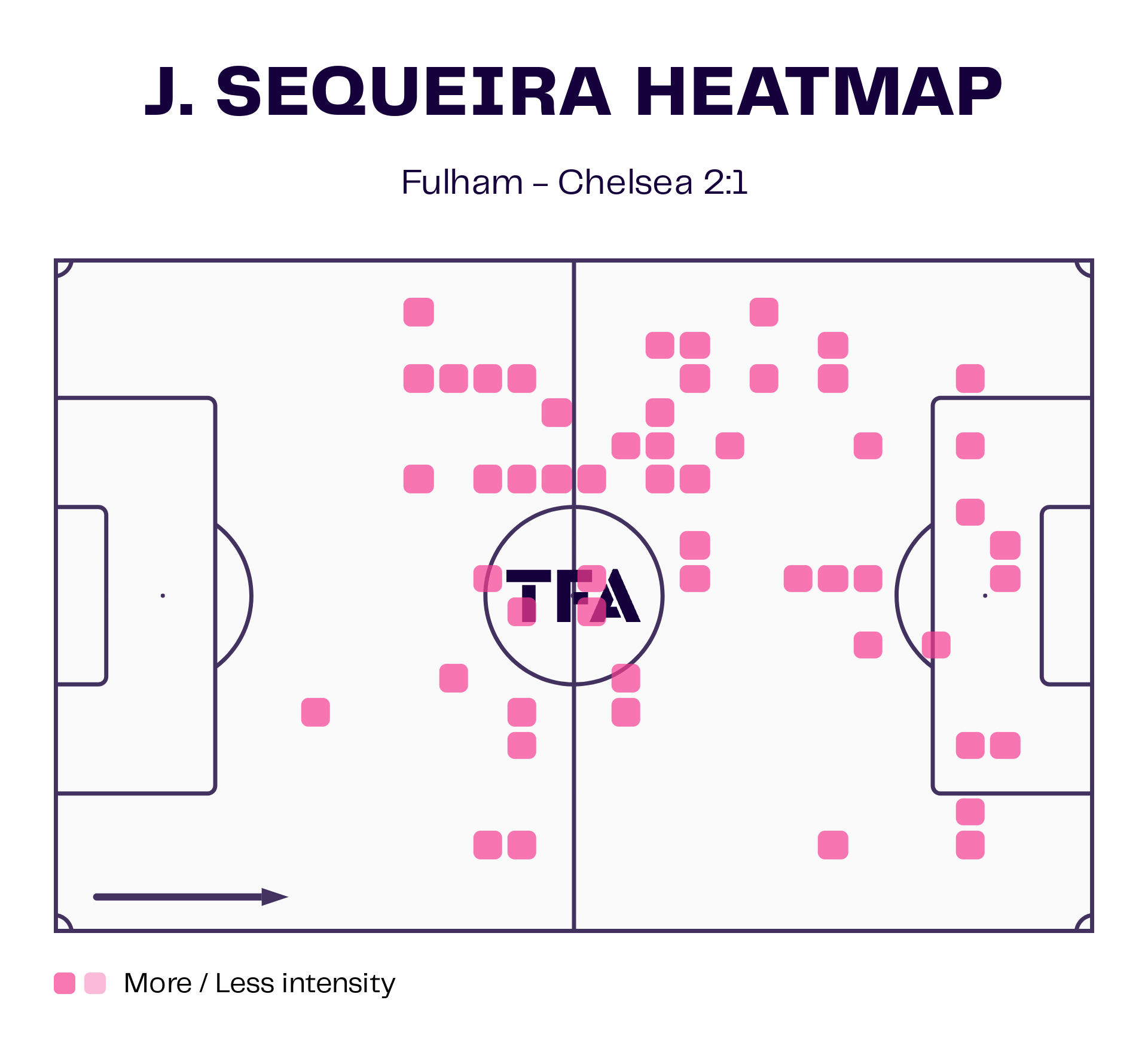 With eleven injured first-team players, it seems wise to continue using him with Havertz or Aubameyang and alongside Mount. From there, he can drop deep or offer runs into the opposition’s box. On his debut, he took five shots in 68 minutes of playing time. Therefore, he should be encouraged to be adventurous with his threat in a team that lacks shooting often.

The Portuguese doesn’t just have a delightful touch and close control, but he shows it under high pressure. This means that he evades closing-down attempts and is a very press-resistant player.

Félix provides several tricks and skills that make him unpredictable. He could be described as fleet-footed. Therefore, he uses his agility to keep opponents guessing. He often provokes opponents into challenges before using their aggression to gain an advantage as they recover. 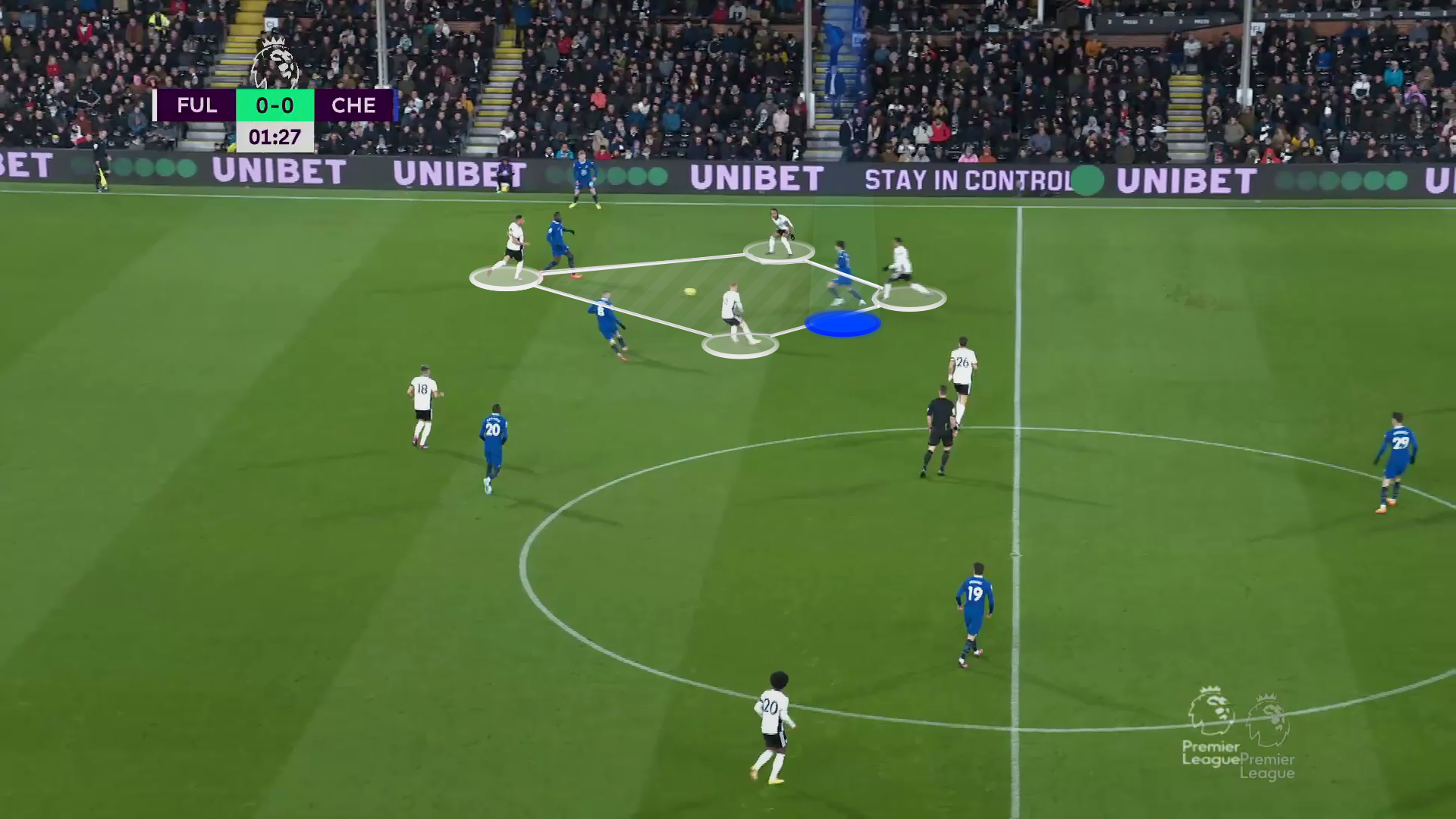 Additionally, he possesses very good acceleration and pace, which allows him to break lines with ball carries. His technical skills ensure he can keep control of the ball even when carrying it at speed. However, he still delays the ball release for too long in several situations. 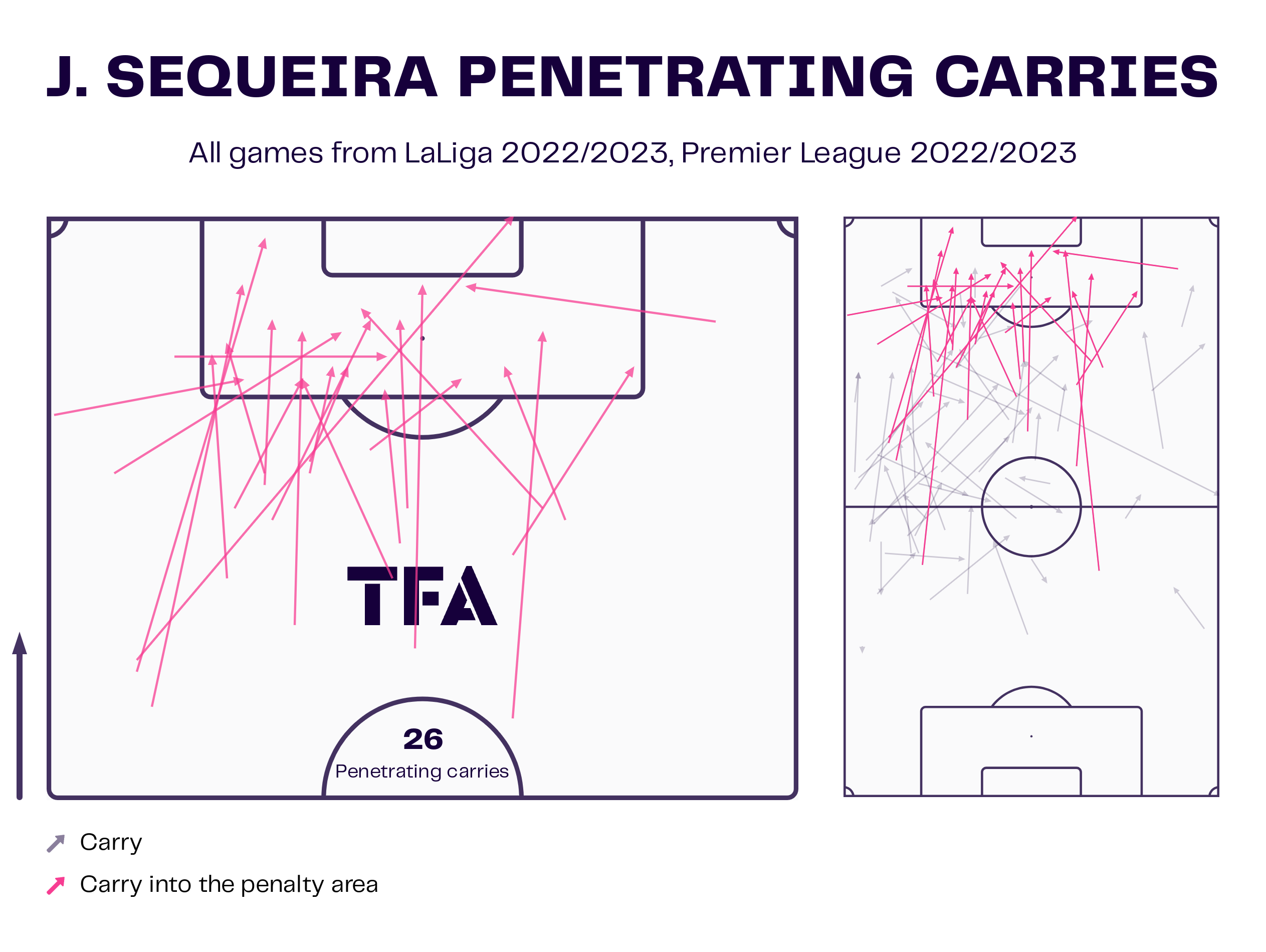 Félix provides strong long-range shooting, even if this is not reflected in his numbers yet. Also, he strikes the ball cleanly with either foot and shows good variety in terms of placement and power. On his debut for Chelsea, three out of his five shots were attempts on target. 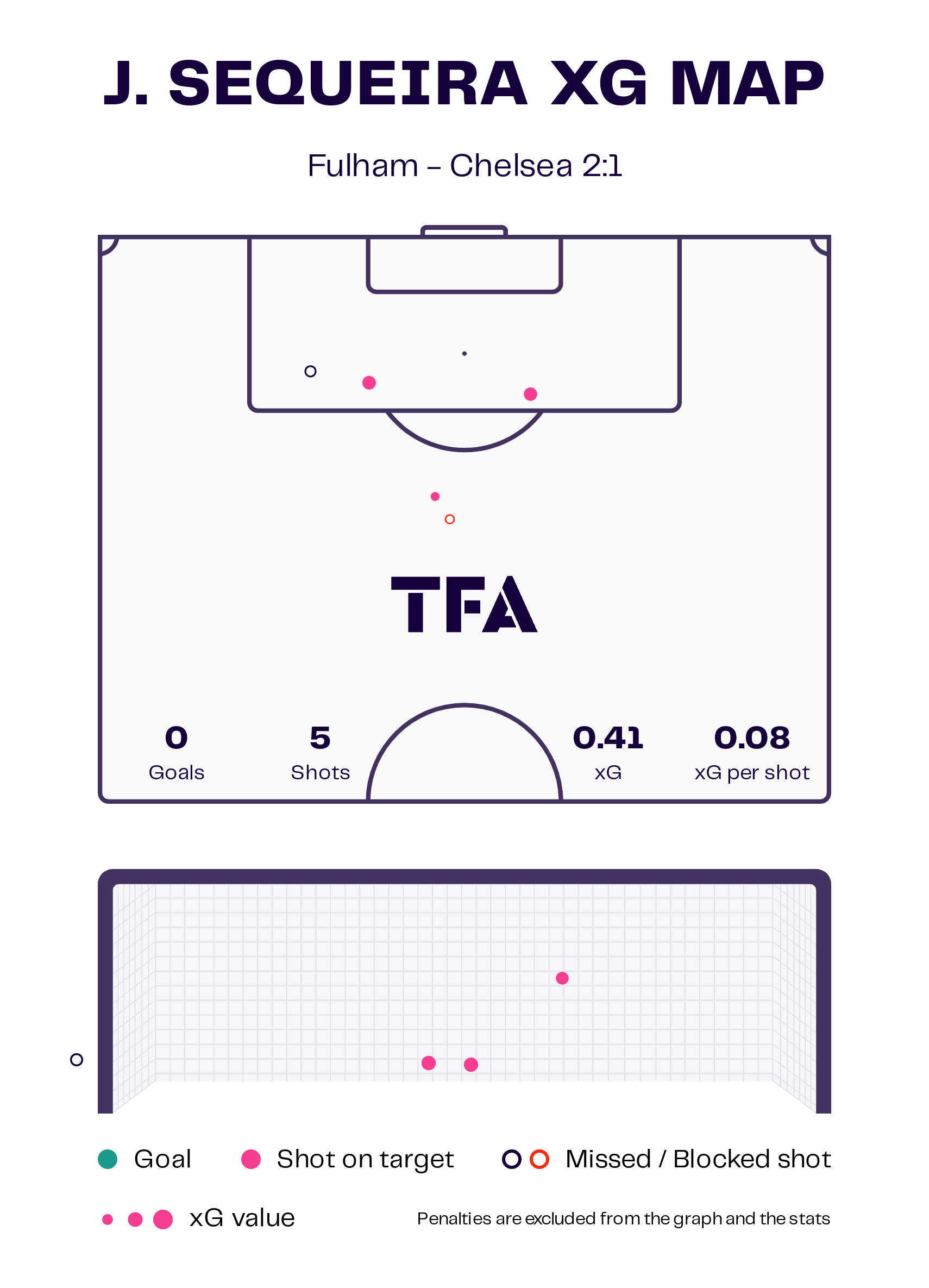 Something that was not utilised enough during his time at Atlético was his finishing. He is very efficient when he gets chances. His rather low centre of gravity allows him to adjust his body orientation very quickly. This results in advantages in attacking situations. 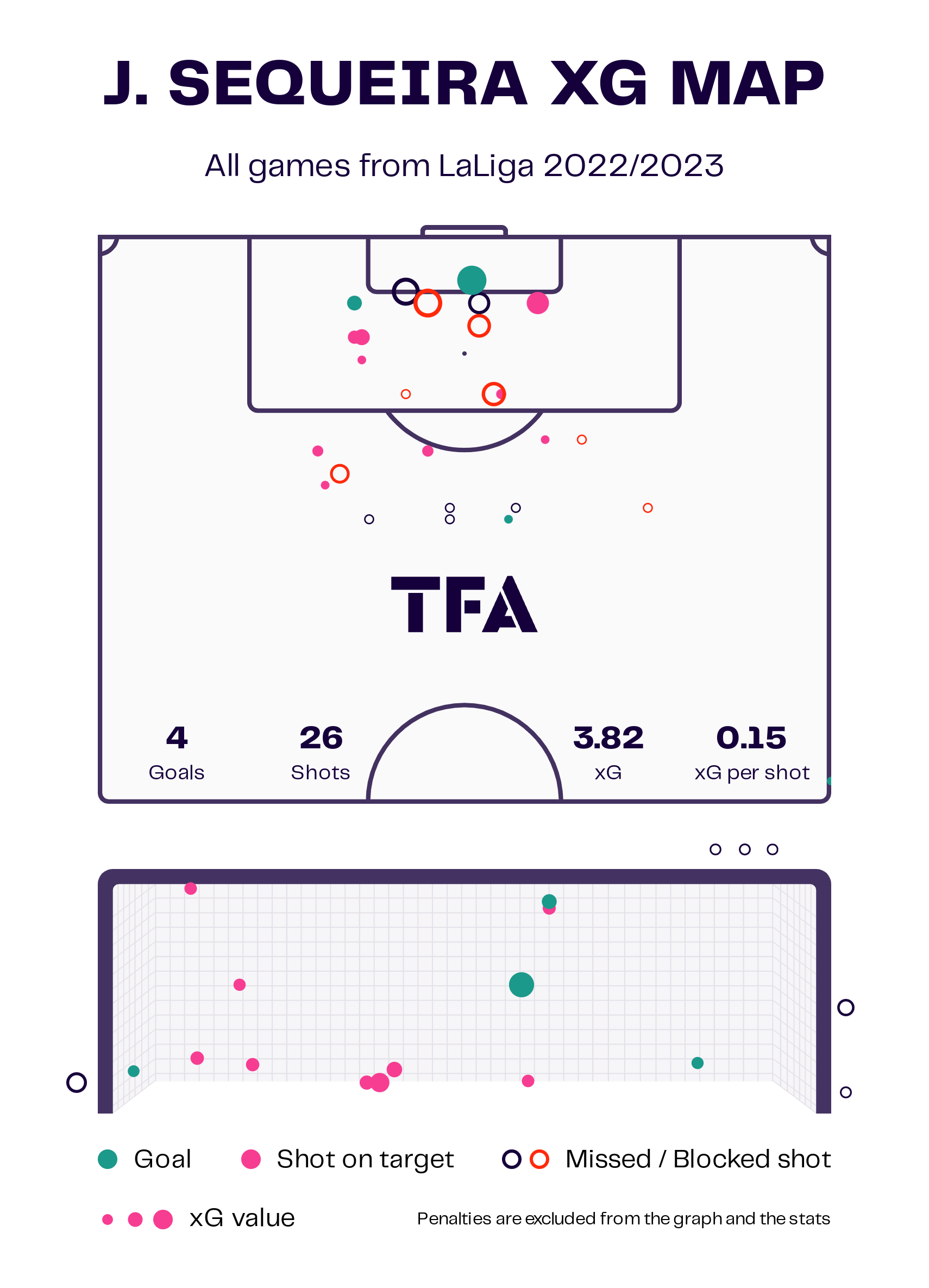 Félix is known for his world-class vision. This excellent spatial awareness helps him to identify advantageous spaces in behind the opponent’s lines. He is adept at deploying line-breaking passes for his teammates. Additionally, he shows great disguising in his passes. Félix is one of the best players in the world when it comes to through passes. 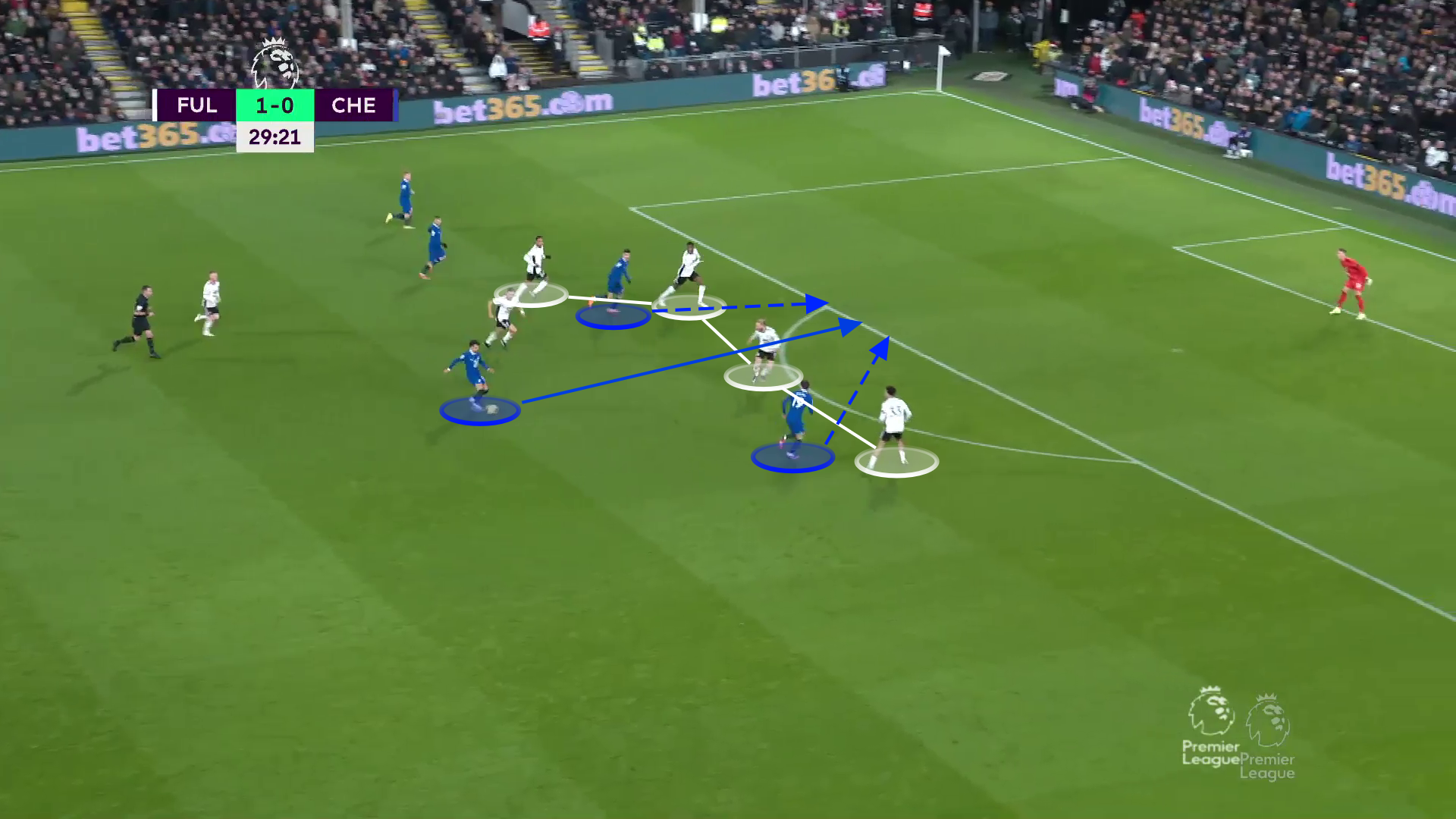 Furthermore, he is very good at initiating and supplying quick interchanges to unsettle the opponent’s defence. He displays finesse in one-on-one situations, is willing to shoot from distance and shows intelligence in exploiting numerical weaknesses with a change of play. Therefore, he passes and moves often to shift the pressure from one side to the other. He then attacks the box.

At Atlético and in the Portuguese national team, he has been the key player in the attacking phase. Since he lacks physical presence, his link-up play with his back to the goal can still be improved. 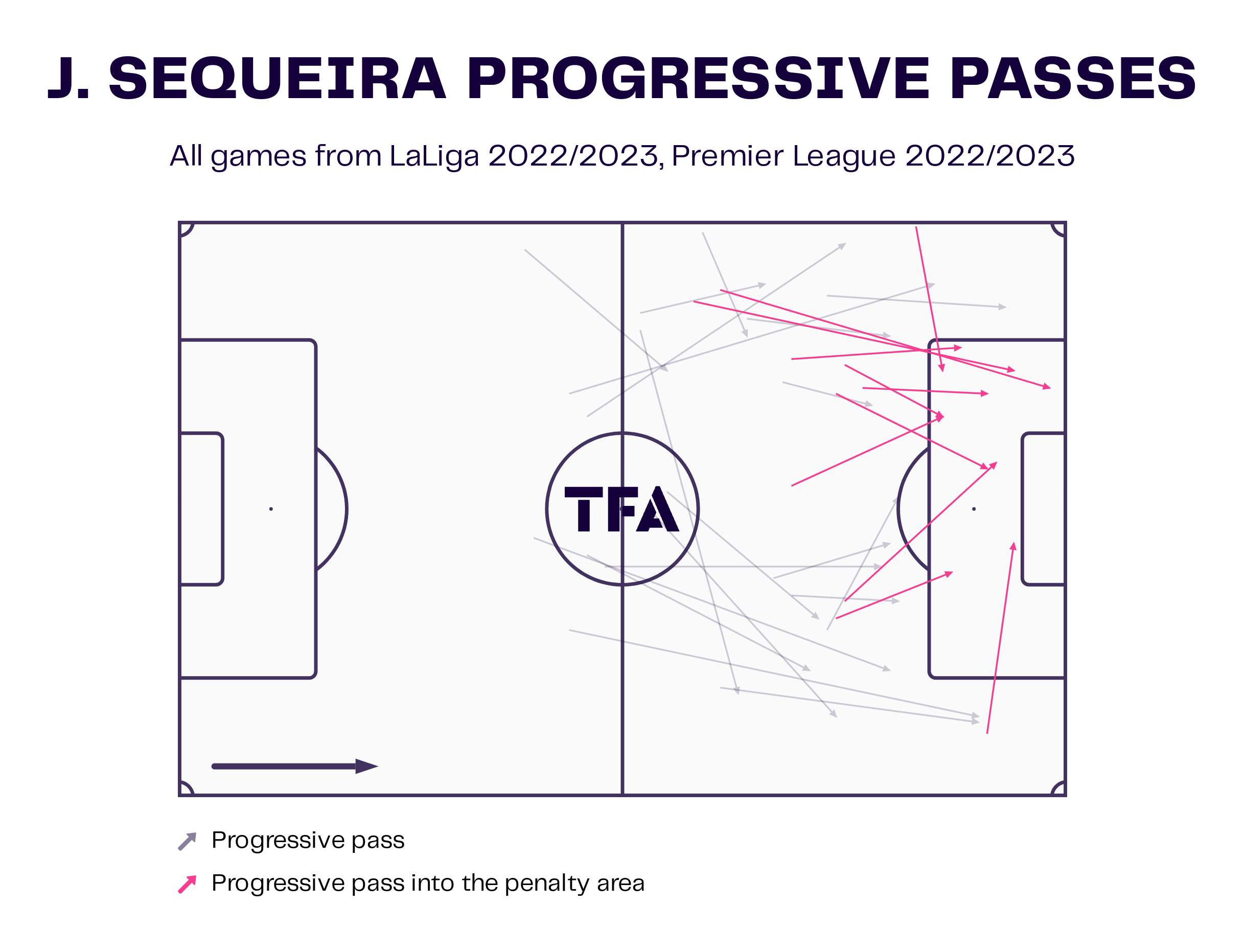 Félix is constantly looking to pick the ball up in pockets between the lines. Afterwards, he can turn and run at defences. Alternatively, he can play one of his outstanding through passes to teammates.

As already mentioned above, the creative playmaker is able to receive on the turn and under pressure. He has the flair to also draw multiple opponents. By that, he can disorient the opposition’s shape. Similar to Harry Kane, Félix will often drop deep to the left-back zone or next to the central midfielders. There, he gets more space and time when on the ball. This added time he will use to assess options before starting the attacks. 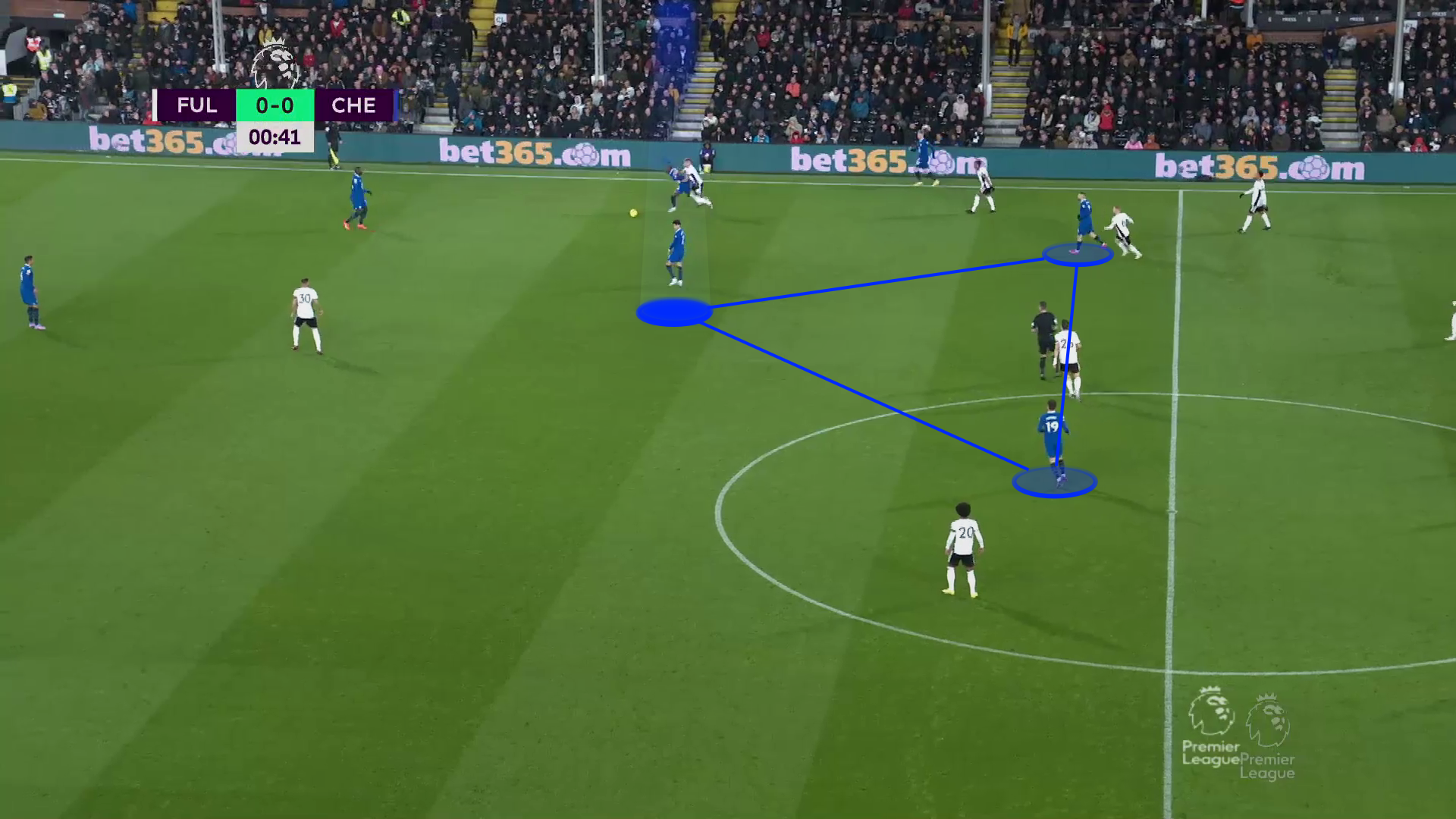 His technical brilliance combined with his quickness makes him very difficult to stop. Once he won the referee’s favour, his markers get yellow cards. He was fouled four times on his Chelsea debut. Two of those earned the Fulham players each a yellow card in the first 15 minutes of the match.

He possesses an instinctual awareness of space and gravitates towards it constantly, allowing him to receive the ball under less pressure. Additionally, he lays off clever passes in pockets for teammates. 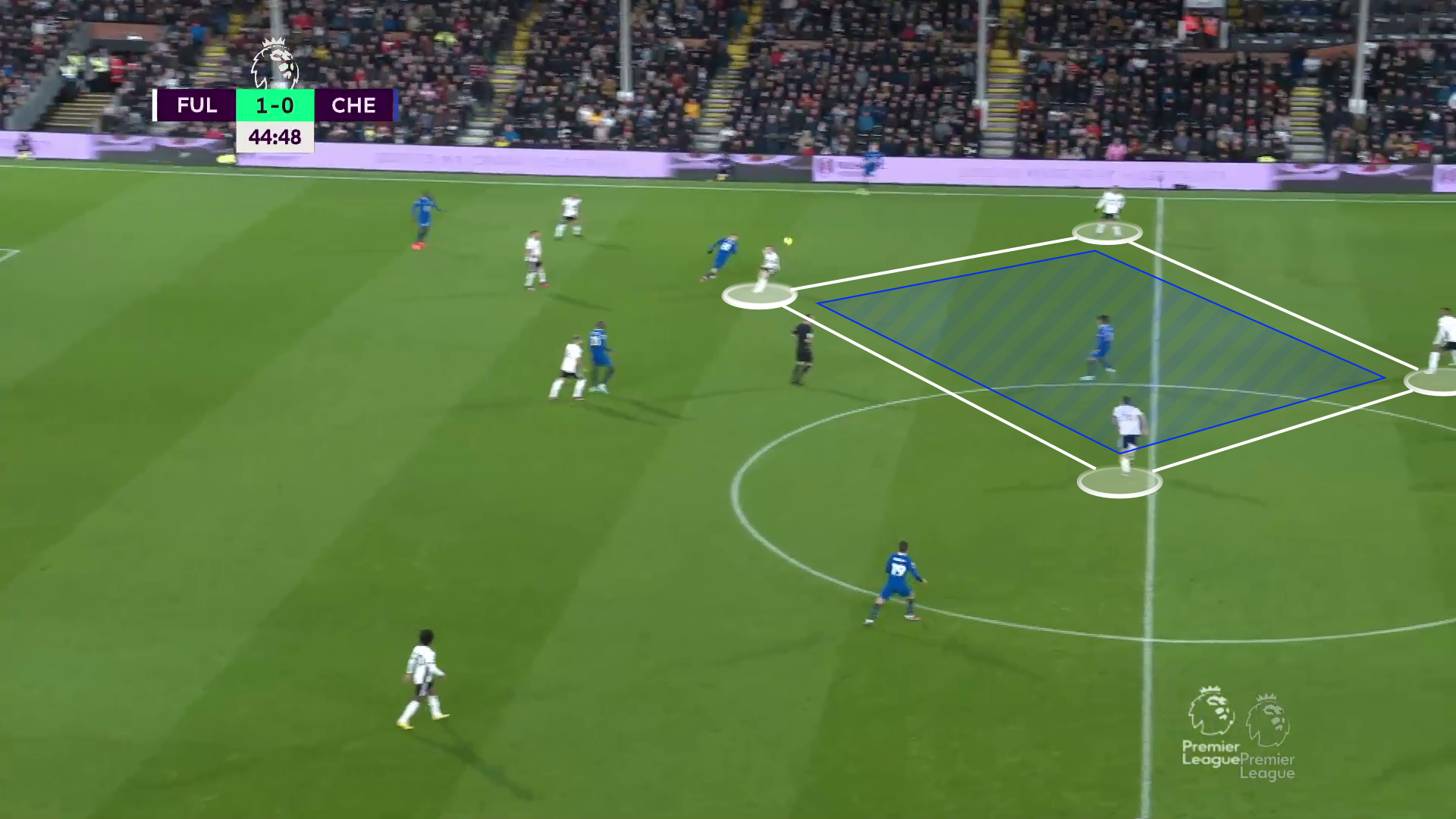 He also shows glimpses of creating separation from markers. Félix positions himself in the defenders’ blind spots and smartly uses the space his striker partner generates by occupying the opposition’s centre-backs. His decent acceleration also makes him a good runner in behind. 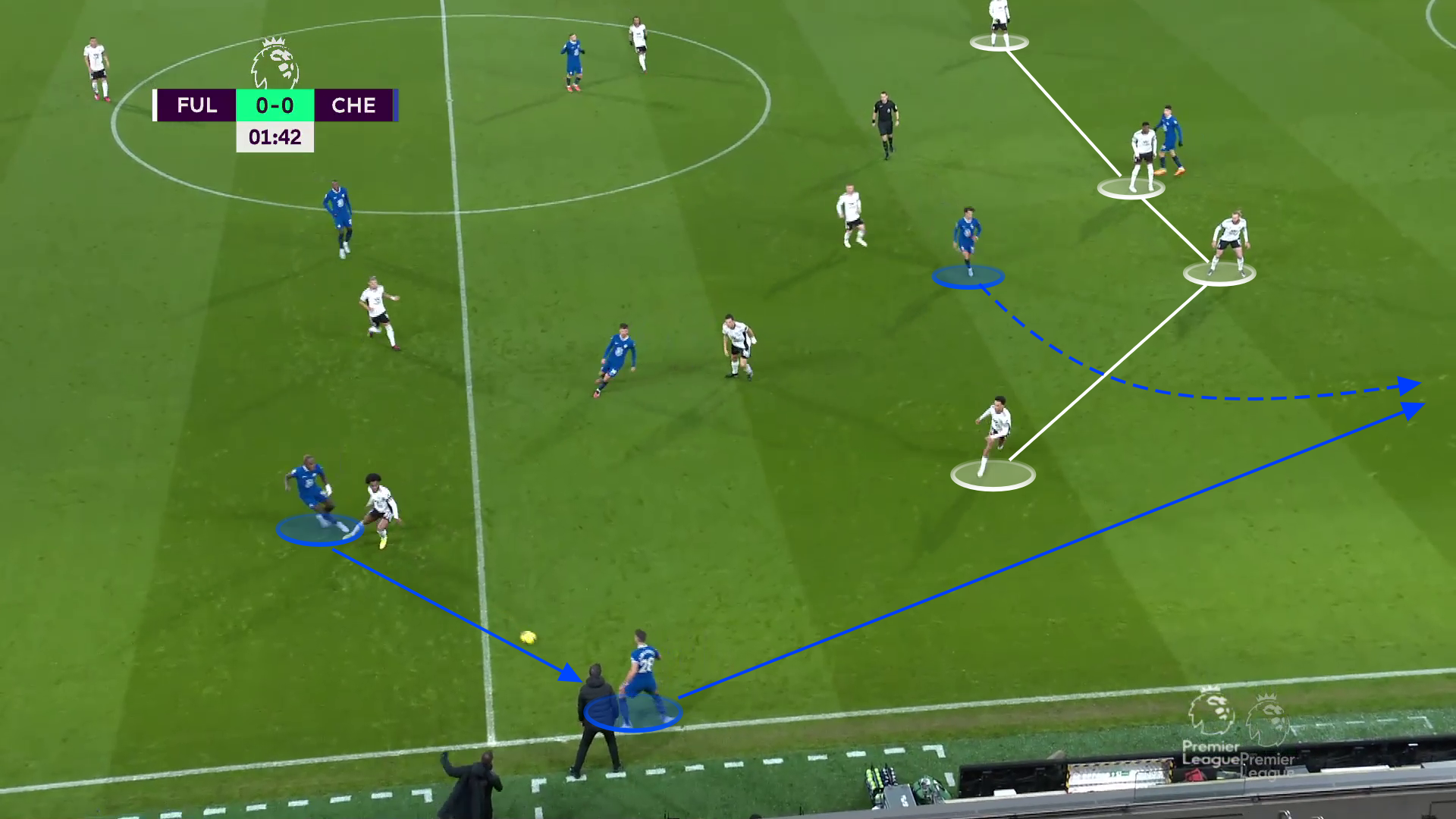 Joao Felix also shines in attacking positions in front of low blocks and in and around the penalty area. His ability to offer himself between lines, turn and free himself with one or two touches is notable.

Overall, Félix shows an excellent understanding of space and anticipates where space will appear constantly. Often, he stays close to opponents who he thinks will be drawn out. Then, he exploits the added space. His smart positioning on the pitch also reflects tactical intelligence.

Unpopular to most opinions, Félix is very good when heading the ball. He generates a lot of power paired with good accuracy. He is also decent at aerial duels but is very inconsistent.

Félix uses his rather skinny body well to shield the ball from pressure. He is also using it to draw contact and fouls when required. However, the frame is a little lightweight and he can be brushed off easily. This is especially the case when he has no immediate passing or dribbling options.

Félix does well in specific defensive situations. He can press aggressively. When he loses the ball, he tries to win it back very quickly. Additionally, he will close down options as long as they are in his immediate area. He is good at pressing and is naturally sticky and hard to get rid of. 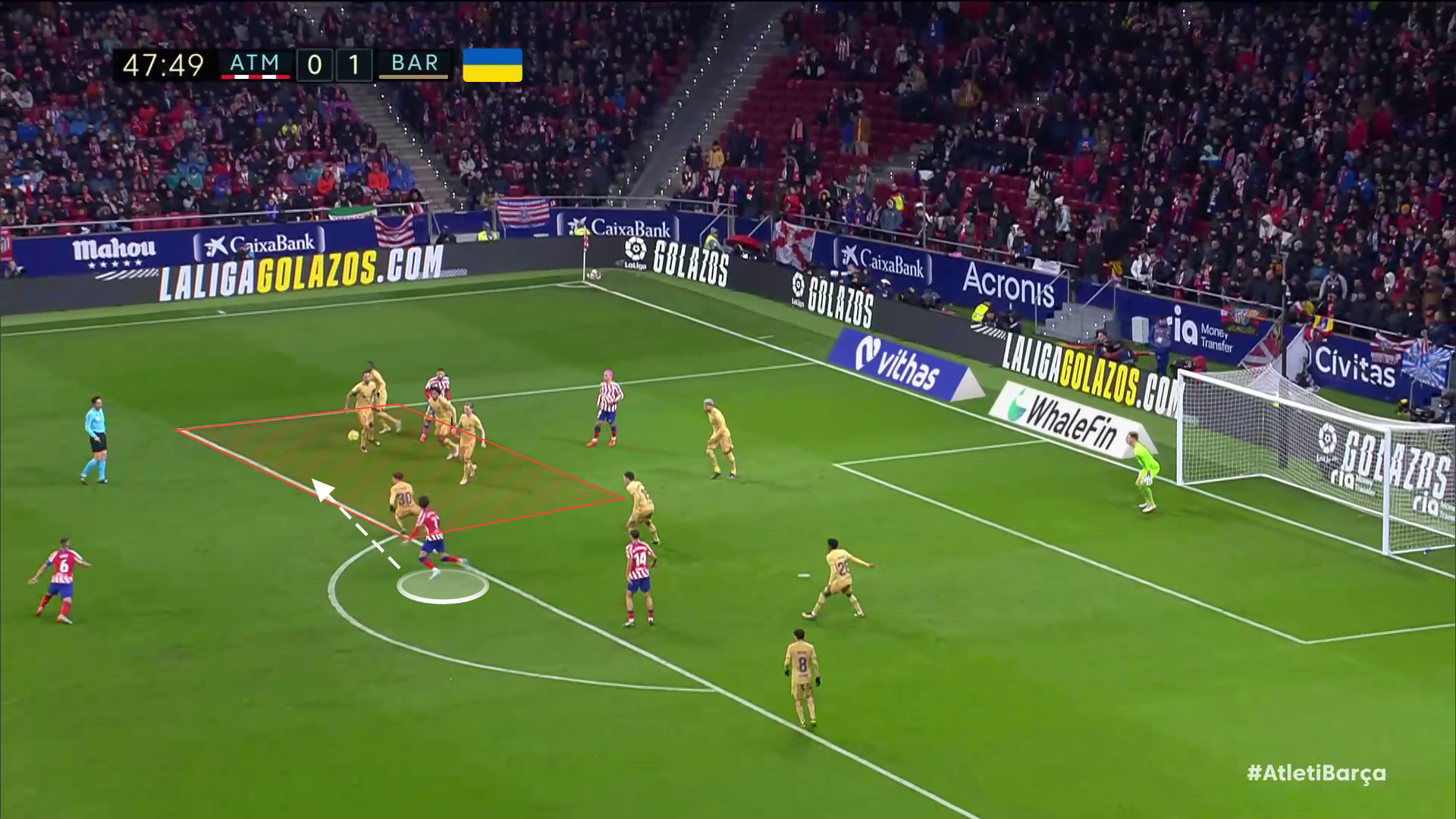 However, he can be too passive. He often loses his man and doesn’t know how to position himself to prevent attacks. And he ranks low in counterpressing wins and high recoveries. Additionally, he goes in tackles mindlessly with strong challenges. One example is his foul on his Chelsea debut for which he got a red card. 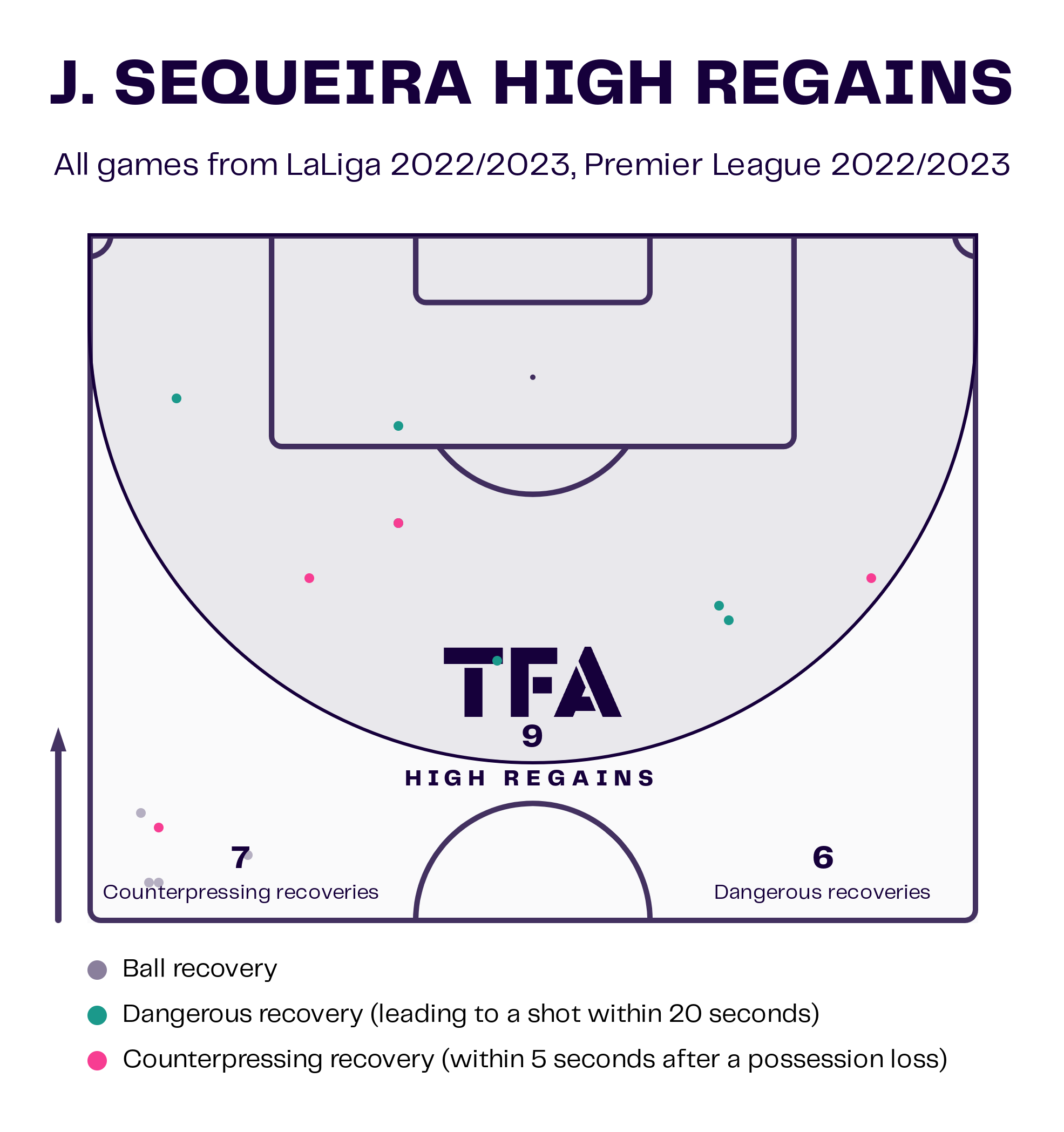 Joao Félix’s stylistic closeness to Christopher Nkunku suggests this was a move with foresight. Currently, Chelsea also have no left-sided attackers (Pulisic and Sterling out). That is why a loan deal was needed which reinforces the team in the short term and infuses tactical familiarity for the long term.

To conclude, Félix was arguably the best option in the market for an injury crisis, which might provide a good blueprint for Nkunku’s use. His versatility means he can fit in Potter’s 4-3-3, 3-4-2-1, 4-2-2-2 and other systems too.

With Diego Simeone rumoured to leave Atlético after the current season, this move might be a short-term win for all parties and Félix could return to Madrid with a new spirit in the summer.