A young, goal-scoring, electric forward from the world’s most successful footballing nation is usually all it takes to have ‘the next Ronaldo, Ronaldinho or Romario’ tag touted to be emerging from the favelas of Sao Paolo and Rio. But the emergence of Gabriel Martinelli as a target for Premier League heavyweights Arsenal has flown under the radar and avoided these hyperbolic labels.

This tactical analysis will give you an insight into this great Brazilian prospect.

The background before the bargain

The story behind Martinelli’s imminent London arrival has come from out of the blue to most Gunners supporters. The links to former Gunner Edu joining the club in the technical director role has been rumored to have influenced the decision to move for the youngster.

The relationship between Arsenal and the success of its South American signings has been one of severe fluctuation. The standout success story is the lynchpin of the ‘Invincibles’ side Gilberto Silva but he was followed by a plethora of underperforming signings such as Denilson, Andre Santos and more recently Gabriel Paulista. So, what is it about Martinelli that has made the red half of North London return to the southern hemisphere to pan for gold?

Like many Brazilians, the art of football is learned on the street and progressing into the 5-a-side Futsal courts. This is where Martinelli’s development into the sport began. Playing for Corinthians’ Futsal team, before the step up to senior football with Ituano. Martinelli made a name for himself as an exciting technical forward, leading to a 2017 trial period with Manchester United. The trial did not end with a deal but the experience had a profound effect on the player’s evolution.

Now 2 years older and after further development, Martinelli has progressed his ability in several areas which has now earned him interest from across Europe. A natural in finessed finishing and strong link-up play, it is not a coincidence a side, accredited with eye-catching free-flowing football, such as Arsenal would be interested in his signature.

Whilst scoring 30-yard screamers at a young age certainly catches the attention of wider audiences with the spread of videos across social media, those who ply their trade on diminutive finishing often fly under the radar. Martinelli’s quiet but consistent progression of his scoring accolades has allowed him to dodge the spotlight, yet not so much as to be underappreciated.

In 2019, Martinelli played in both the Campeonato Paulista and Sao Paulo Youth Cup and in 18 games across both competitions the Brazilian scored 12 goals, all before his 18th Birthday.

Playing both centrally and out to the left, his finish of choice is often coming in from a wider position to curl a shot past the opposition keeper. Close ball control and deft touches allow close control before administering a killer strike.

As shown in the heat maps below, the dominance of his deployment on the left-hand side of the field has been a key feature of his time at Ituana. Often thought of in several media outlets linking the forward with a move to Arsenal as a striker, it is more likely he would be in direct competition with Alex Iwobi and fellow youth player Bukayo Saka – the latter of which has reportedly received interest from numerous German clubs. A position in which goals have been desperately needed. 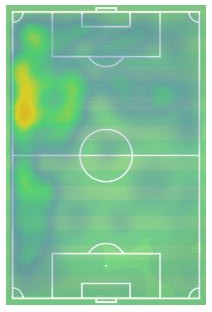 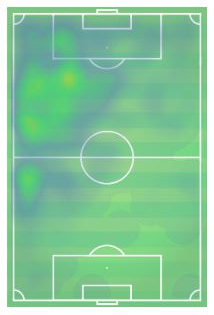 But not only his individual efforts have made him such a standout talent, the way he always tries to bring team-mates into play to benefit both himself and others alike. The game against Bragatino was an excellent example of this. In a central position, spotting the run of a teammate to the left wing, weighing the ball perfectly before making the run through the centre.

The Ituano prodigy does not lack in speed and can burst into positions with ease. Martinelli knows where he needs to be even at such a young age and his instincts will allow the Brazilian to be that one step ahead of most defenders. Certainly, a step up to the Premier League would represent a huge increase in the standard of defending he has faced but having the natural movement will stand Martinelli in good stead to take the challenge feet first.

Then when it comes to the final finish, Martinelli has the composure to be able to decide on his shot type to outwit the goalkeeper in the fractional amount of time given to him. In this instance, lofting the ball in a controlled fashion beyond the keeper to convert Ituano’s second.

Speed, movement, link-up play, and composed finishing. Traits which were present at 16 and have progressed to the cusp of his 18th birthday.

As shown, Martinelli has already been displaying the great link-up play to enable the young forward to dart into dangerous positions and with a calm head finish past an onrushing keeper. However, any forward player, especially as versatile as the Brazilian, must be able to spot and find difficult passes to get the best from his team.

The variety of passes from the equal variation in his positions on the pitch is another impressive feature of his game. His ability to spot the movement of team-mates and play the correct pass with either foot is a coach’s dream.

Although he may occupy the left wing and be predominantly right-footed, his crossing using his left shows no sign of tentativeness or doubt. Under pressure, Martinelli can find his colleagues on the field and set up key chances.

If the reported move to Arsenal does happen it will certainly be a career-defining one. Young stars from Brazil moving into Europe often go via Portugal or Ukraine. To make the more ambitious leap, similar to that of Gabriel Jesus of Manchester City, Martinelli will have an increased amount of pressure and expectation to break into Unai Emery’s plans.

Fortunately, Arsenal are in the middle of an identity crisis in both personnel and style and with a currently simpler route, barring any further signing, into the first-team squad, there are strong hopes Martinelli could be a successful beginning of Arsenal’s revitalised transfer policy to invest and develop young talent.