How will former Everton midfielder Demaris Egurrola fit in at Lyon?

The future of several Olympique Lyon Feminin stars are up in the air with less than six months left on their contracts. Amandine Henry, Saki Kumagai, Sakina Karchaoui and Eugenie Le Sommer are just a few names that could walk away from the French giants this summer. This means that Lyon needed to start future-proofing their squad by bringing in reinforcements on the off chance their players don’t resign. After signing the American sensation Catarina Macario, they turned their attention in signing a defensive midfielder. The midfielder they chose is Damaris Egurrola of Everton Women.

The Spanish defensive midfielder was a surprise target but one that makes sense given her abilities and play style. This scout report will detail Egurrola’s attributes and why they’re a good fit for Lyon’s tactics. She moves to France just six months after moving to Everton from Spain and given the fight for players that will ensue this summer, it is a welcome move.

Damaris Egurrola is a talented and versatile 21-year-old central defensive midfielder who moved from Athletic Bilbao to Everton in summer of 2020 before her move to Lyon. Egurrola’s play style is more defensive than attacking where her main priority is to protect the back four providing them with a base. Capable of playing as a central defender too, Egurrola seems to be reminiscent of Kumagai who is arguably the best defensive-minded midfielders in the world.

Egurrola is excellent positionally and her ability to defend through interceptions and tackles by making early moves across is what makes her such a good midfielder. She is more of an anchorman which means she is almost a fifth defender at times, and the position she occupies prevents teams from getting in behind as much. This allows the more creative players the freedom and space to express themselves.

She isn’t one to move away from her defensive third much preferring her midfield partner(s) to be more attacking. Decent in possession, Egurrola can recycle possession efficiently, which makes her a very useful ball carrier that fits Lyon’s needs.

The midfield pivot is one of the most critical roles at Lyon given the influence and effect they have on the way they play. The midfielders are required to be fluid in movement but positionally disciplined to be able to effectively defend and transition from defence to attack. There are two types of midfielders that are used, one being the protector whilst the other is the more progressive, attack-minded midfielder.

Lyon’s first choice in this position is usually Kumagai and Henry who are the perfect mould for this double-pivot. Kumagai is the more defensive player who will screen the back four and cover positions vacated by the full-backs and become a third centre-back in certain situations. She also is an adept ball player and passer when she needs to be and has used her long passing capabilities to play in the quick forward players.

At Lyon, you need to be versatile whilst still being a specialist in your given position and role. In Egurrola, Jean-Luc Vasseur has bought a young player who is a specialist in her position but still has room to grow given her age. The Kumagai role is the one Egurrola will be taking up with the rest of this analysis set to explain how she can.

The main attribute that is needed and what she possesses is her positional awareness in defending. Egurrola is athletic which allows her to move across the pitch with ease giving her the ability to cover her defensive area. 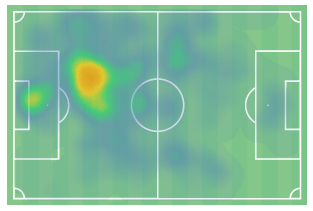 If we look at the heat map above you can see that most of her activity is just in front of the defenders. One notable feature of the heat map is her movement in the 18-yard box which means she regularly tracks back and defends the area from wide crosses. Everton did a lot of defending against crosses so moving in to intercept them.

Having mainly played in a 4-1-4-1 at Everton, she moves to a Lyon team where the general shape is a 4-2-3-1. Both teams played with a sitting player with a more progressive player. As we said, Egurrola’s positioning is her best asset which enables her to identify spaces to intercept any through balls or crosses. 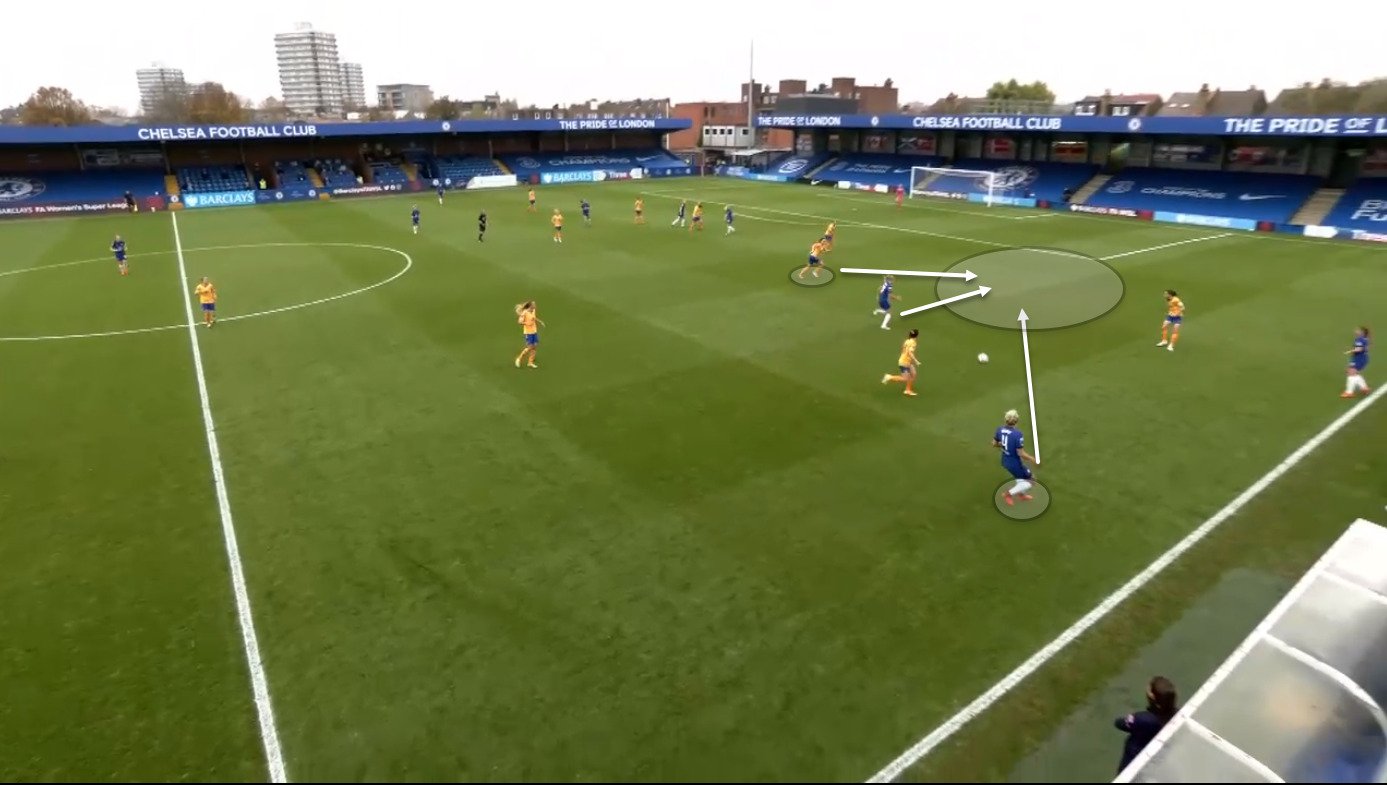 This example above shows the position that Egurrola often occupies when it comes to her defensive midfield position and how she uses it to thwart the imminent danger. Millie Bright makes a pass towards Pernille Harder in the right half-space which Egurrola identifies quickly and makes a move towards the highlighted area and makes a well-timed tackle. In doing so, she’s able to stop Harder from creating any crossing chance and relieves the pressure off Everton Women’s defence. 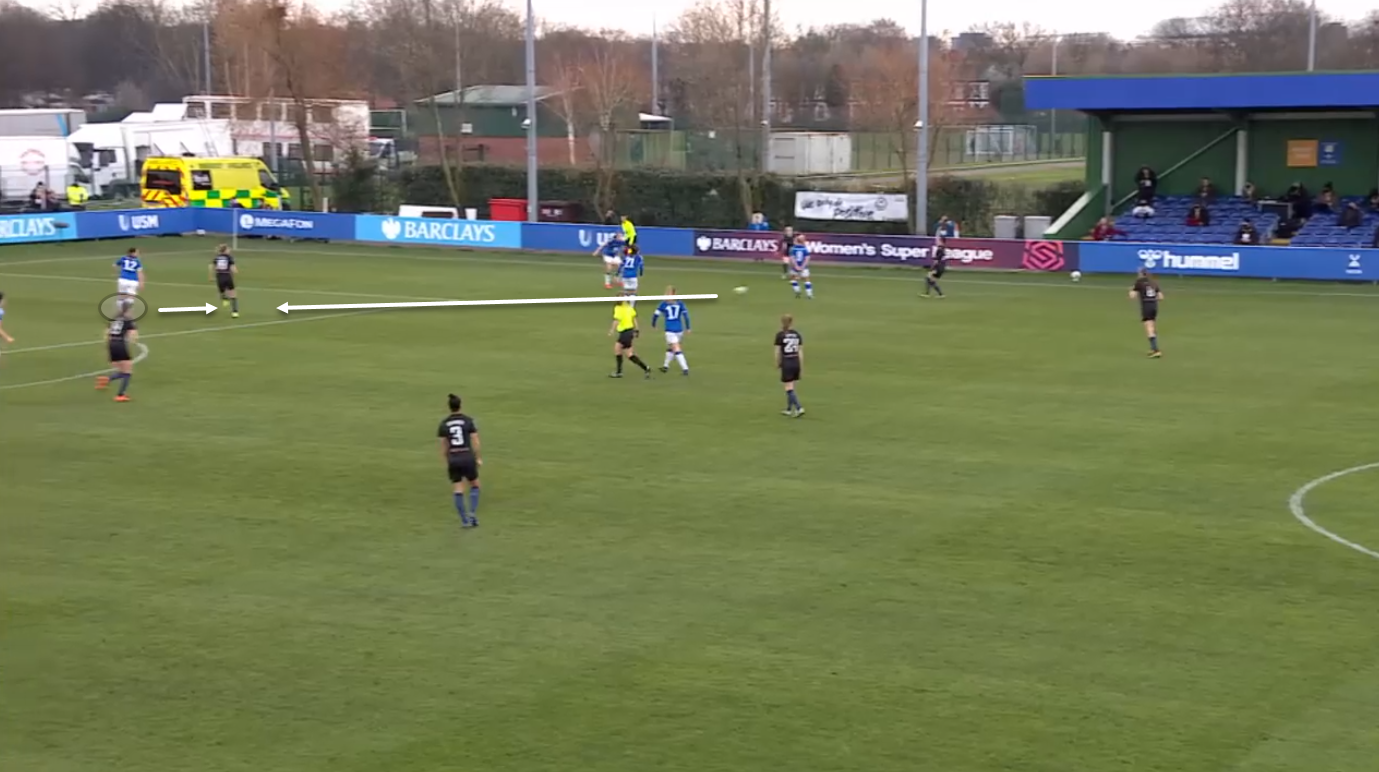 This example shows her tactical discipline and how it’s used to effectively stop teams from moving forward. Here, Egurrola is playing as a central defender and is well-positioned to cover shadow Manchester City’s striker who is about to receive a pass from wide. 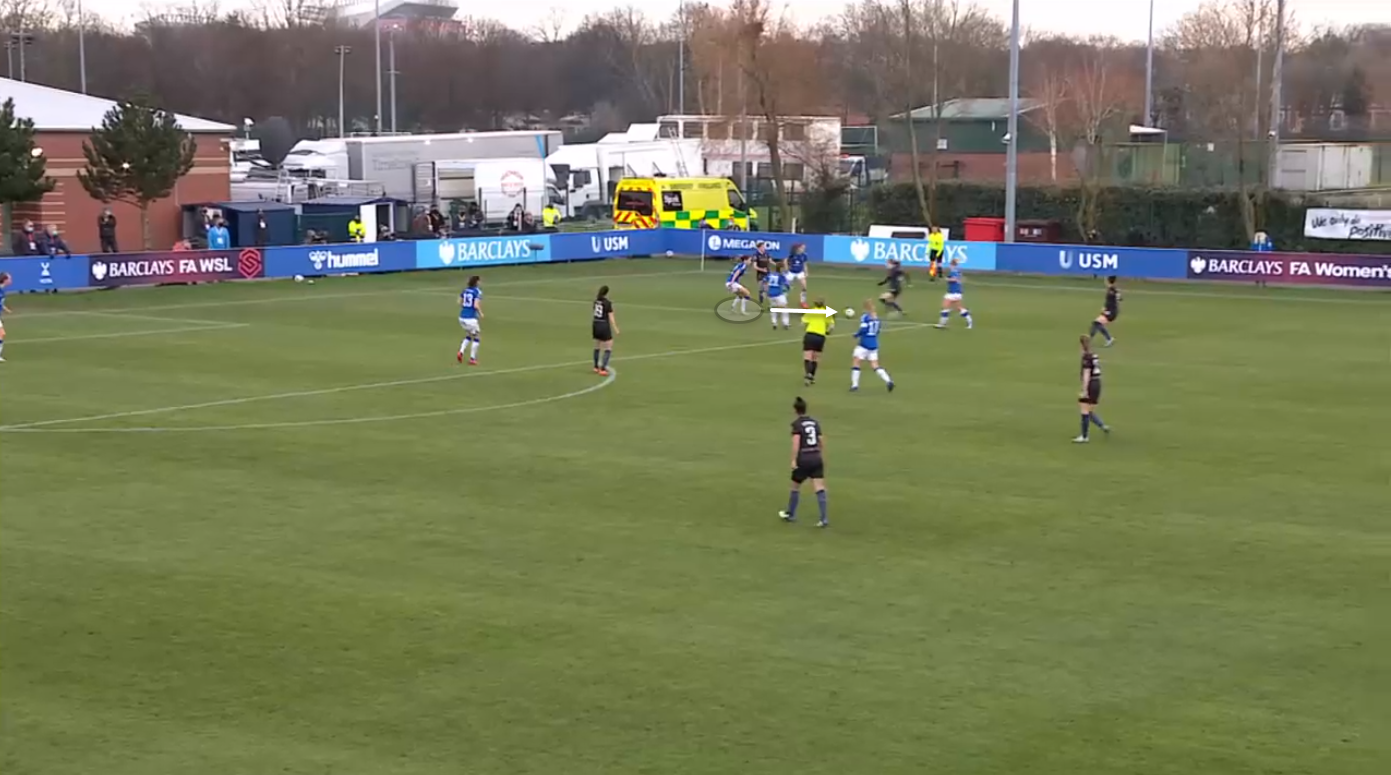 Egurrola manages to stop the player from moving towards goal and pushes her back out wide. In the second image, we can see that more Everton players have come in support with Egurrola pushing to close down the ball carrier to diffuse any more pressure on the team.

From a statistical point of view, Egurrola averages 7.17 interceptions per 90 minutes, 12.54 recoveries per 90 minutes, and 10.92 defensive duels per 90 minutes (57% success rate) according to Wyscout, which all point towards her being a very active and willing defender who will engage in midfield duels. The 57% success rate is quite good for a player her age given the level of competition in the FAWSL.

Players that move to Lyon need to be proficient on the ball, at the very least comfortable in possession and under pressure given the monstrous amounts that they have every match. Deeper midfielders are especially liable to pressure from opposition forwards and need to be able to break pressing lines through effective passing or dribbling. Egurrola fits the profile with her calm demeanour and comfort with the ball at her feet. She is able to break the press through calm short dribbles and incisive passes through a combination of short, recyclable passes and long-ranged ones as seen in the below example. 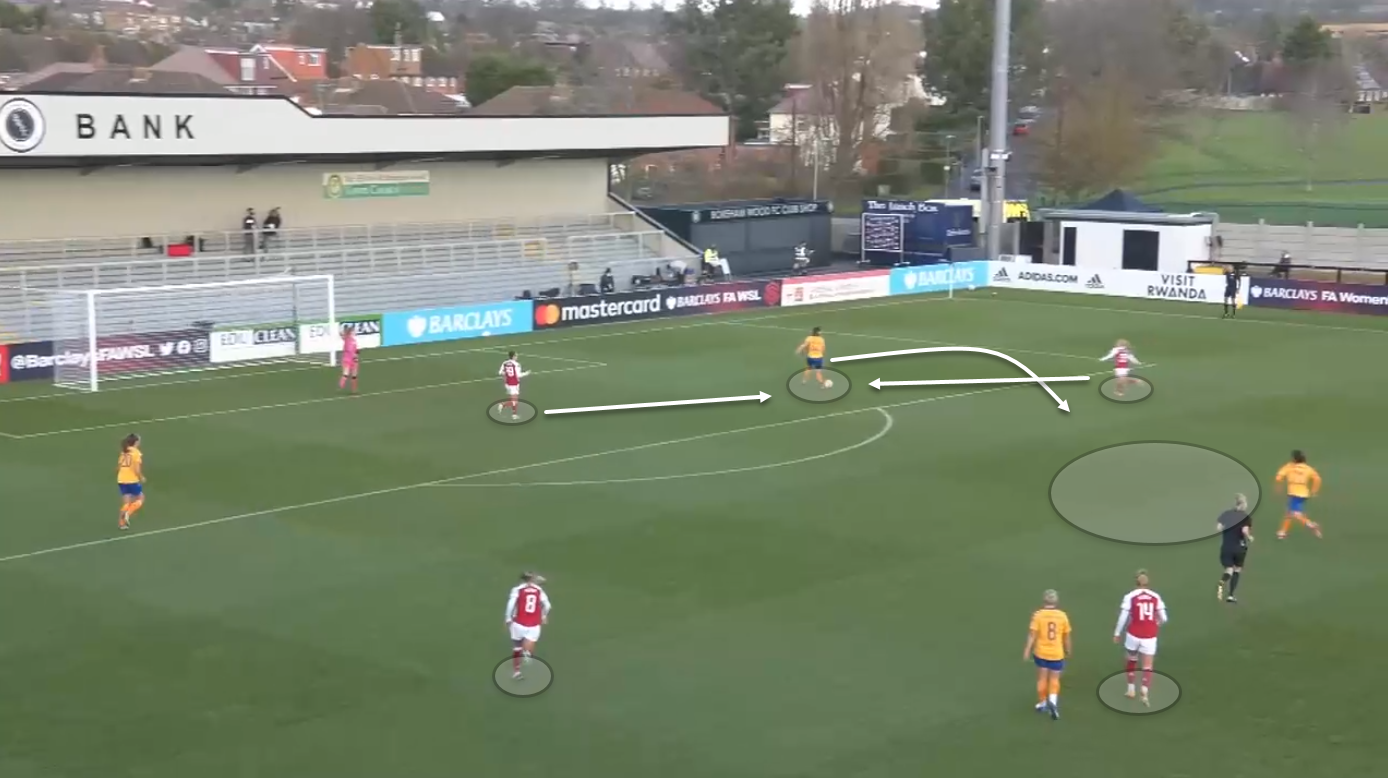 In this passage of play, Egurrola receives the ball from her goalkeeper but is being pressed by Arsenal’s Beth Mead who is closing her down quickly. With her back turned, there is a short amount of time between turning, finding the right pass, and escaping the pressing situation. She manages to calmly knock the ball past Mead and move into the highlighted area from where she plays a long-ranged pass out to the full-back to relieve Everton of pressure in the defensive third. There are four Arsenal players in the vicinity so playing a shorter pass may have resulted in a dangerous turnover. 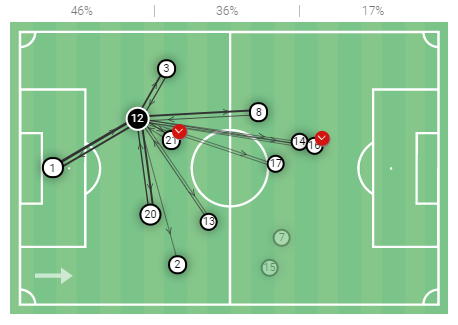 She averages 7.08 long passes per 90 minutes (55% success rate) which is a high frequency with a healthy accuracy rate. The above pass map is an indication of her passing tendencies. What’s important to understand here is that though she is playing as a central defender, Egurrola (#12) has shown a good range of passing keeping it simple above all else. The passes to her centre-back partner and full-back is indicative of this but she is capable of more adventurous passes given the number of links to the players further forward.

What stands out the most is the thicker line between Egurrola and Izzy Christensen (#8) which shows trust between the two players. Christensen is an excellent ball carrier and passer and when paired in midfield, the two were a perfect foil for one another. Given that they formed a good relationship in such a short period of time, this bodes well for Vasseur given that he might need to thrust Egurrola in the thick of the action soon. Developing a similar partnership with Henry or Sara Björk Gunnarsdóttir will be of paramount importance with the UEFA Women’s Champions League resuming soon.

The move seemed a strange one from a distance. A young, unproven defensive midfielder moving to the world’s best football club in a January transfer window was a questionable move but having dug deeper into this tactical analysis, it becomes clear that Vasseur and Lyon are looking to reduce the age profile of the squad whilst looking to secure talent just before they hit their prime given the players who can leave in the summer.

Egurrola has bags of potential and could very easily develop into a world-class defensive midfielder playing and learning from the very best at Lyon. She has the qualities that many Spanish midfielders possess and more with some capable defensive skills.

We may not see the very best of Egurrola now but given time, we could see a player blossom into another Saki Kumagai.