With the penultimate month of the 2020-21 season approaching, important clashes have been taking place across different competitions and one such clash was between the Premier League leaders Manchester City and top-four contenders Everton in the FA Cup sixth round.

Manchester City came into the clash in good spirits, having notched three consecutive wins across all competitions since their defeat in the Manchester derby. Everton on the other hand, suffered a defeat to Burnley in their most recent league game that dented their chances of securing a top-four spot. This tactical analysis will look at the tactics used by both managers, with our analysis aiming to find where the game was won or lost.

Everton lined up in the 5-3-2 system that they have been using recently, especially since their famous win at Anfield last month. Carlo Ancelotti made four changes to the lineup that was defeated at Turf Moor last weekend. Jordan Pickford was out injured once again and was replaced by rookie keeper Joao Virginia. Seamus Coleman, Gylfi Sigurdsson and Yerry Mina were the other players to be drafted into the lineup. 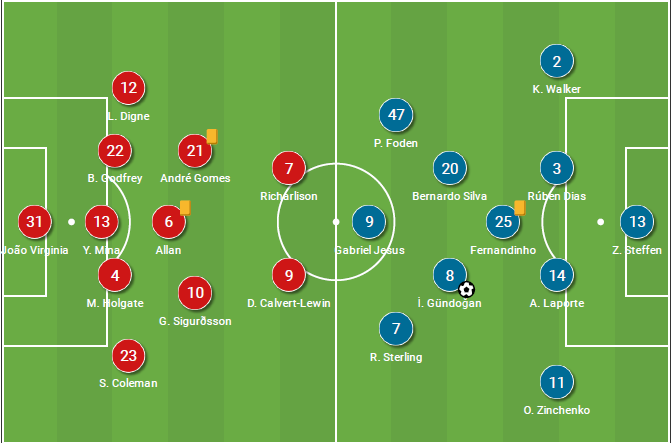 Pep Guardiola himself made five changes to the side that defeated Borussia Monchengladbach in the Champions League. Raheem Sterling, Fernandinho, Aymeric Laporte, Oleksandr Zinchenko and Zack Steffen came into the XI, with a strong bench available if changes were needed.

Manchester City are one of the best teams in Europe in playing out from the back. No matter who the opposition, they find a way to efficiently build-up from the back, such is the quality of players at their disposal. Everton, meanwhile, have deployed a mid-block that sees them press high in the initial stages but immediately drop back if the press is beaten.

Here, their high press was poor to start with and it gave City an easy way to play their way out. In the example below, Everton press high with Richarlison pressing the ball carrier, Ruben Dias, while keeping Fernandinho in his cover shadow. Dias is also unable to access Laporte on the other side, or his goalkeeper, as Richarlison is in the right position in between them to intercept the pass. However, the issue here is the positioning of Andre Gomes. He had moved centrally once the pass was played to Ruben Dias, and since Allan had already moved forward to press Fernandinho from behind, his movement made no sense. Kyle Walker moves wide but with Bernardo Silva also in the same horizontal lane, Gomes could have gone much closer to Walker to effectively press both players as they would have been equidistant. Since he came central when Walker had the ball, he was much more concerned about Silva and dropped too deep as a result. This opened the passing lane to Fernandinho as he was no longer in anyone’s cover shadow and City were able to effectively break out. 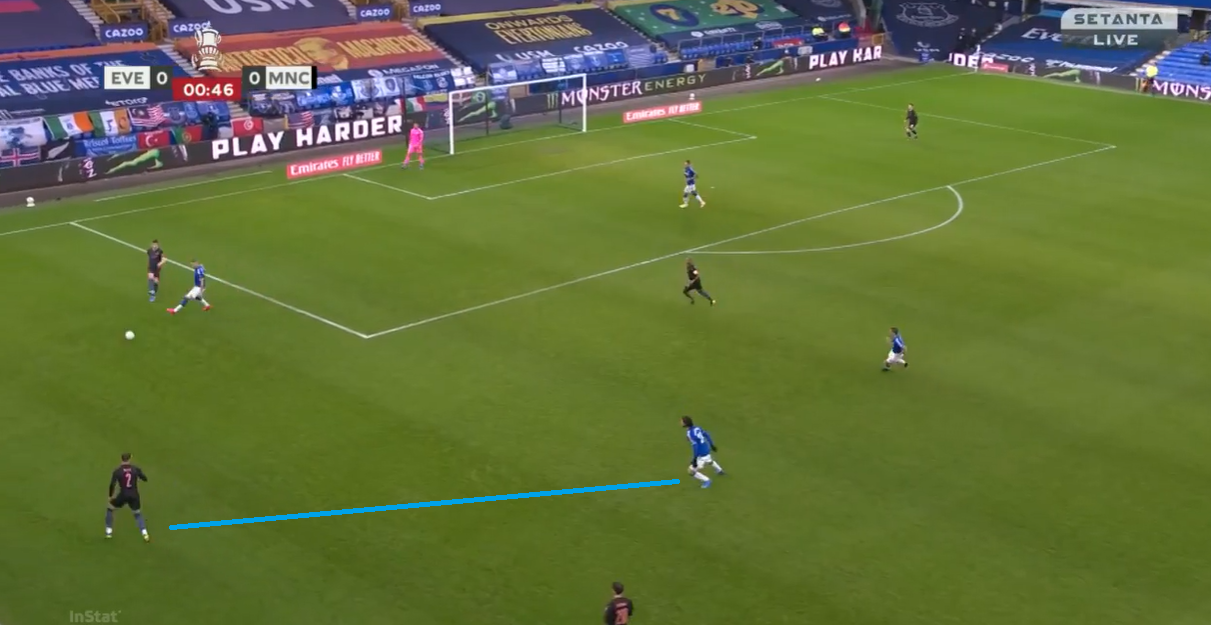 In another example, Gomes now gets his positioning right as he is much closer to Walker while also keeping Bernardo in his cover shadow. Allan too offers additional security for Bernardo as he closely follows him. Richarlison now blocks the passing lane to Dias. But now Fernandinho is left open and Dominic Calvert-Lewin reacts very slow in pressing the Brazilian. This again gave another City player time and space which was used to good effect to again play their out of the back. 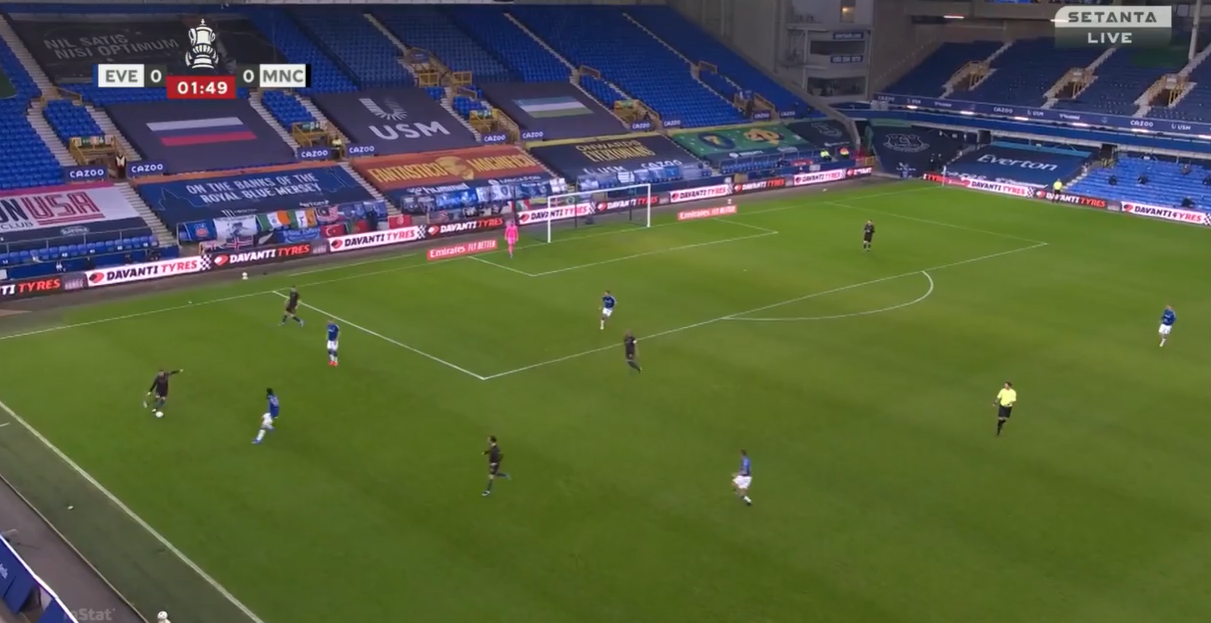 After some instructions from Ancelotti, this aspect was improved with respect to Calvert-Lewin adjusting his positioning and making sure that he was much closer to Fernandinho once the ball was played out wide to Walker. Gomes was again positioned correctly, with Allan covering behind him. Calvert-Lewin, this time, was in the right place and closer to Fernandinho. But City were again easily able to play out, as Walker moved a step forward to drag Richarlison away from Ruben Dias. This forced Richarlison to press Walker without blocking the lane to Dias. Even if he did block the lane by having a better-curved run, Walker had another passing option open to the goalkeeper. So this extra movement by Walker opened the field up and his pass to Dias meant that the Portuguese international could switch it immediately to the opposite side. With Everton crowding the ball on the near flank using their zonal system, the far side was left free. 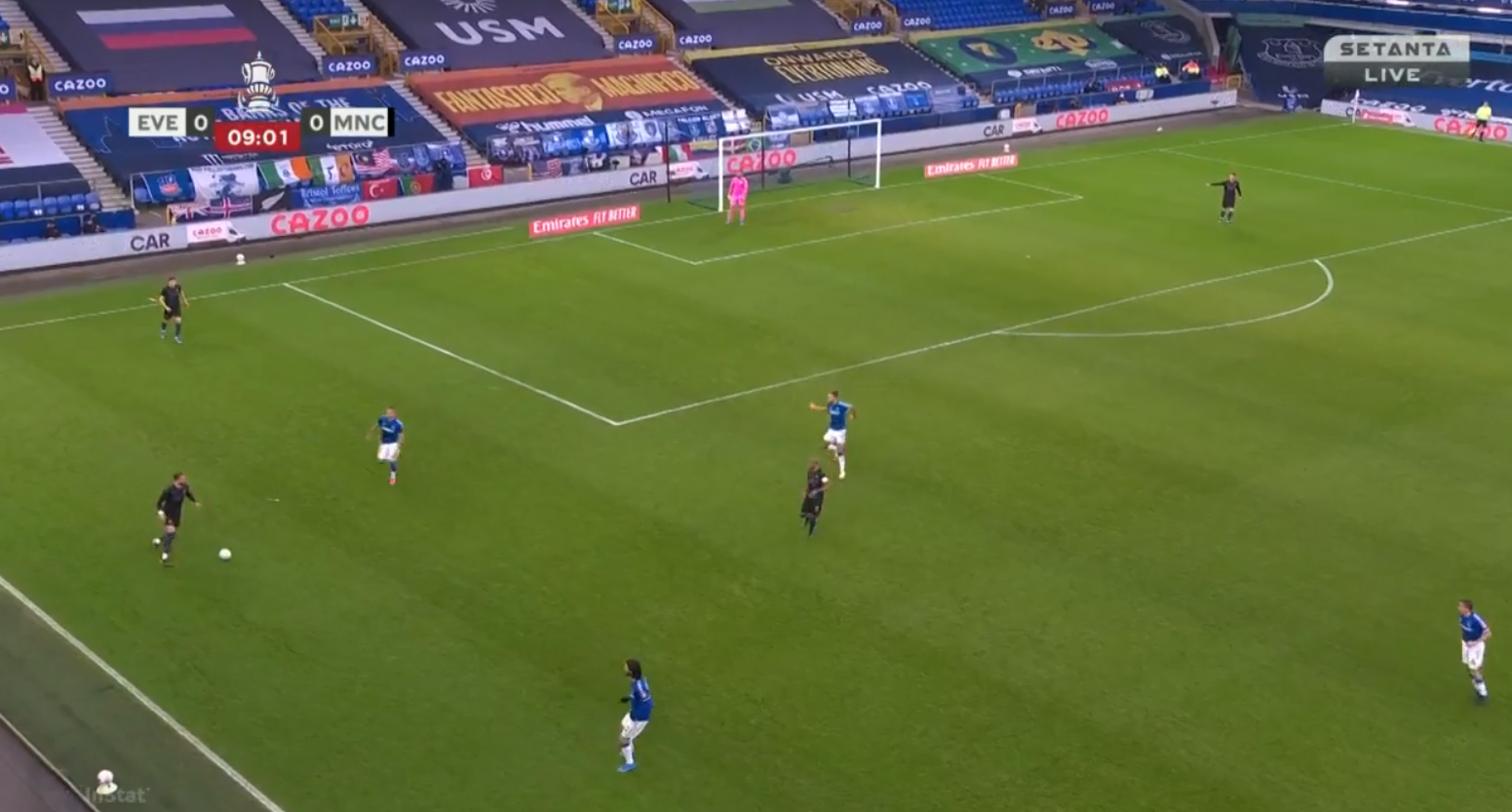 City’s shape shifted into a 3-1-2-4 once they entered the middle third. The three in the middle was formed by Fernandinho, who was the one just ahead of the defensive line. The two ahead of him were Ilkay Gundogan with one of either Gabriel Jesus or Bernardo Silva as they would rotate positions. An example of this can be seen below as they have a specific structure in place. We can see how they have formed triangles specifically on the wings despite no central presence. This was to ensure that the Everton defence was stretched laterally and spaces were opened up. 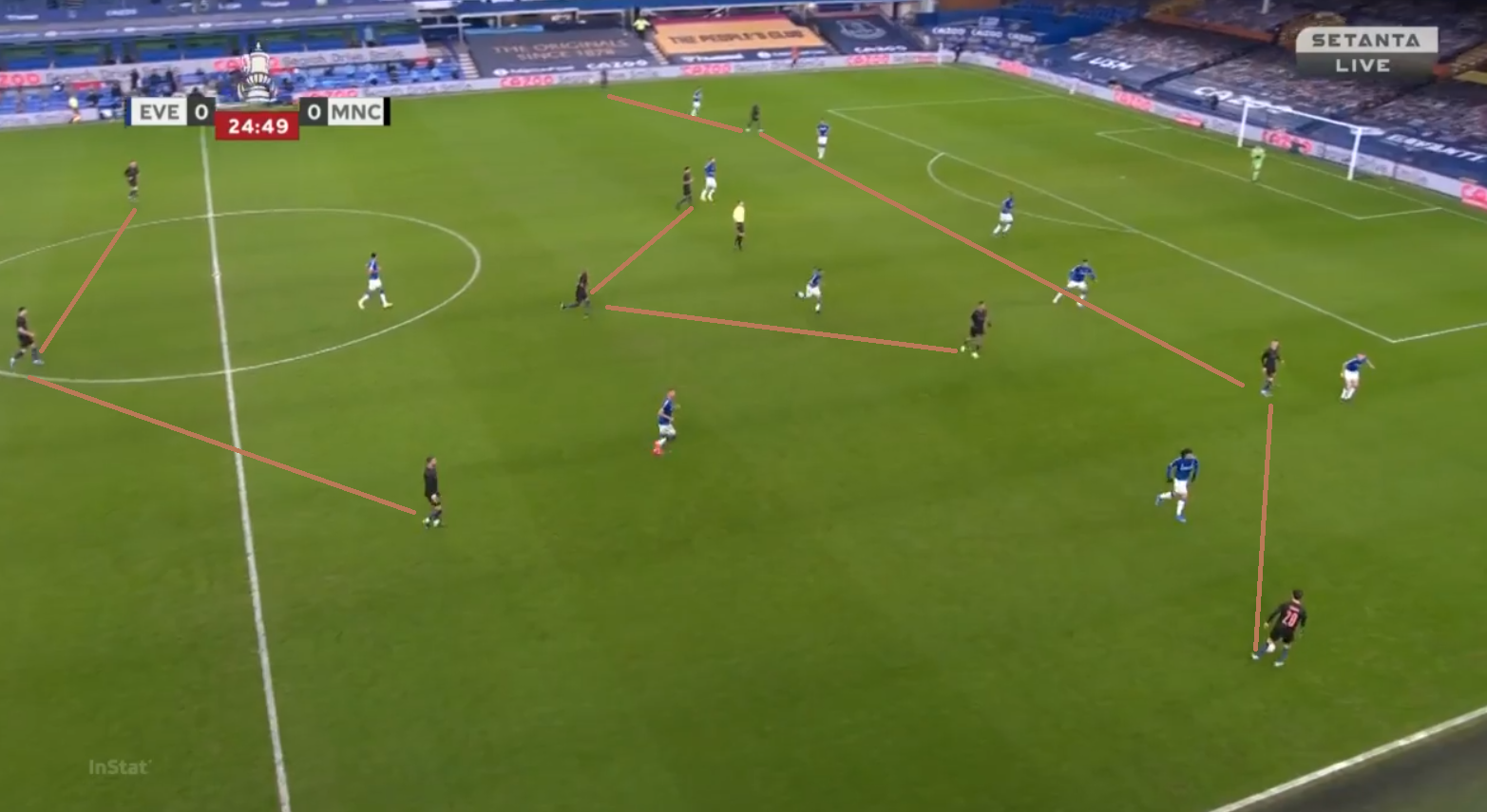 Once Everton settled in their mid-block, they were efficient at controlling the progression of the City players and ensured that their opponents had very less space to penetrate into. We all know City play with five players in their attacking line. Everton went with a 5-3-2 system that seemed to mirror the City attack and ensured that they were tightly marked. The example below shows Gabriel Jesus dropping deep to receive the ball but he is tightly followed and pressured by Ben Godfrey. The centre-back’s freedom to follow his marker was possible due to the additional defensive support provided by their system. 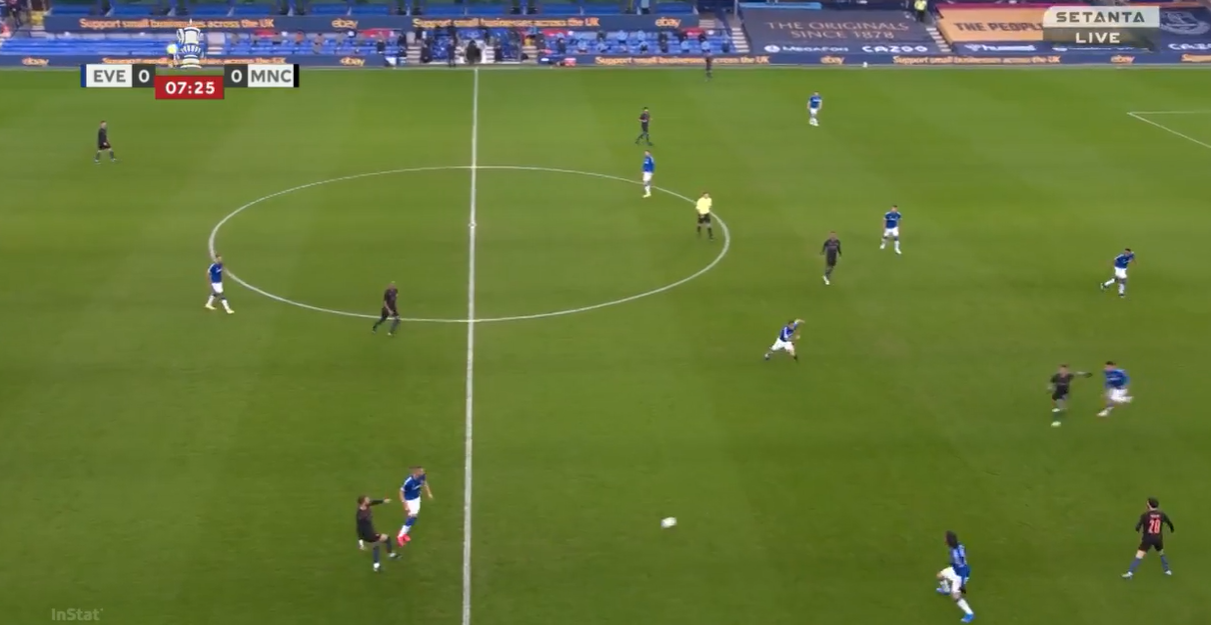 In the mid-block, Richarlison now takes a much deeper position as he predominantly marks Fernandinho or keeps him in cover shadow when looking to press other players. The image below shows Everton being much more conservative as they have settled into a low block. The low block means that space in between the lines was compressed effectively. 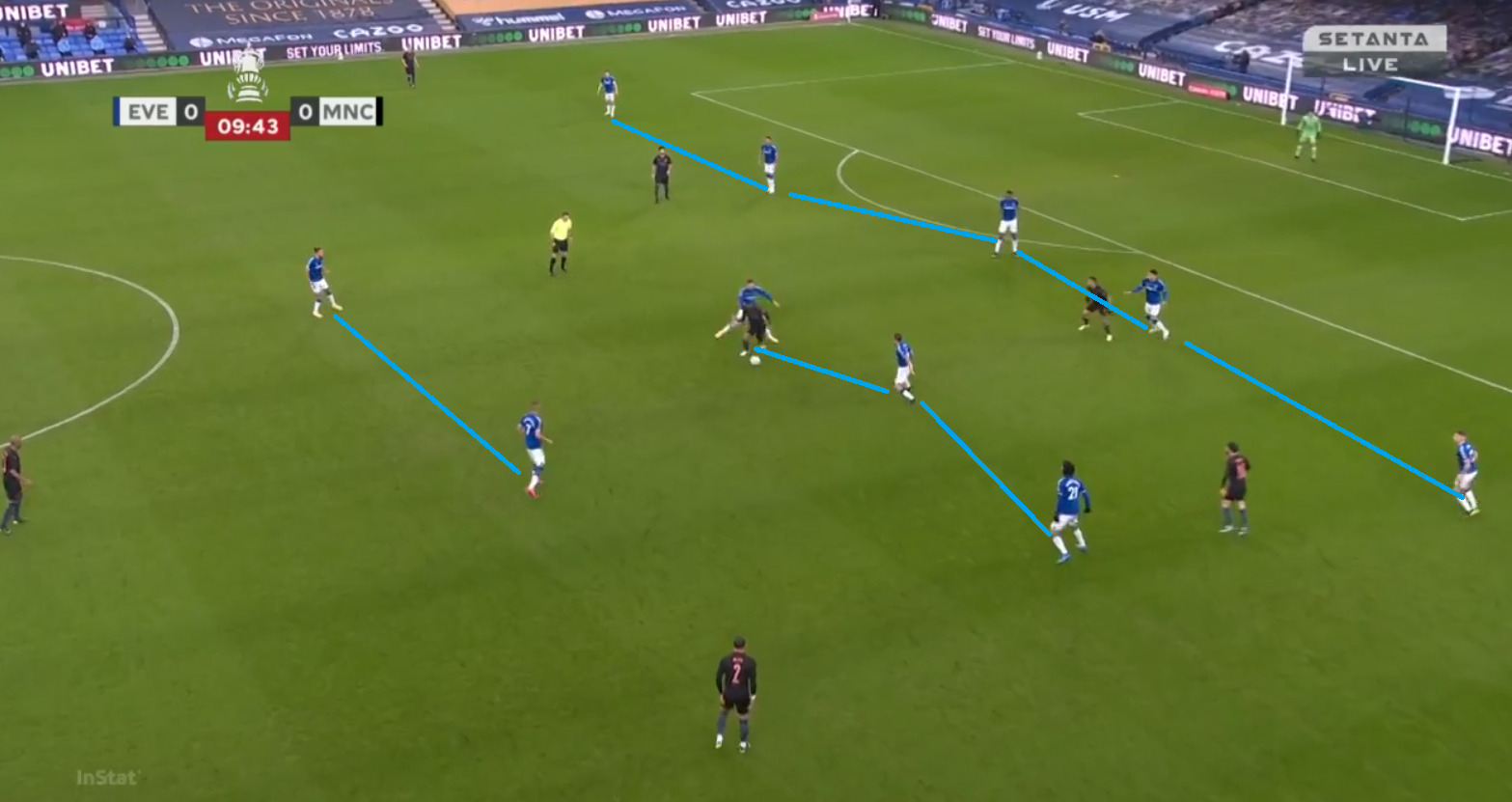 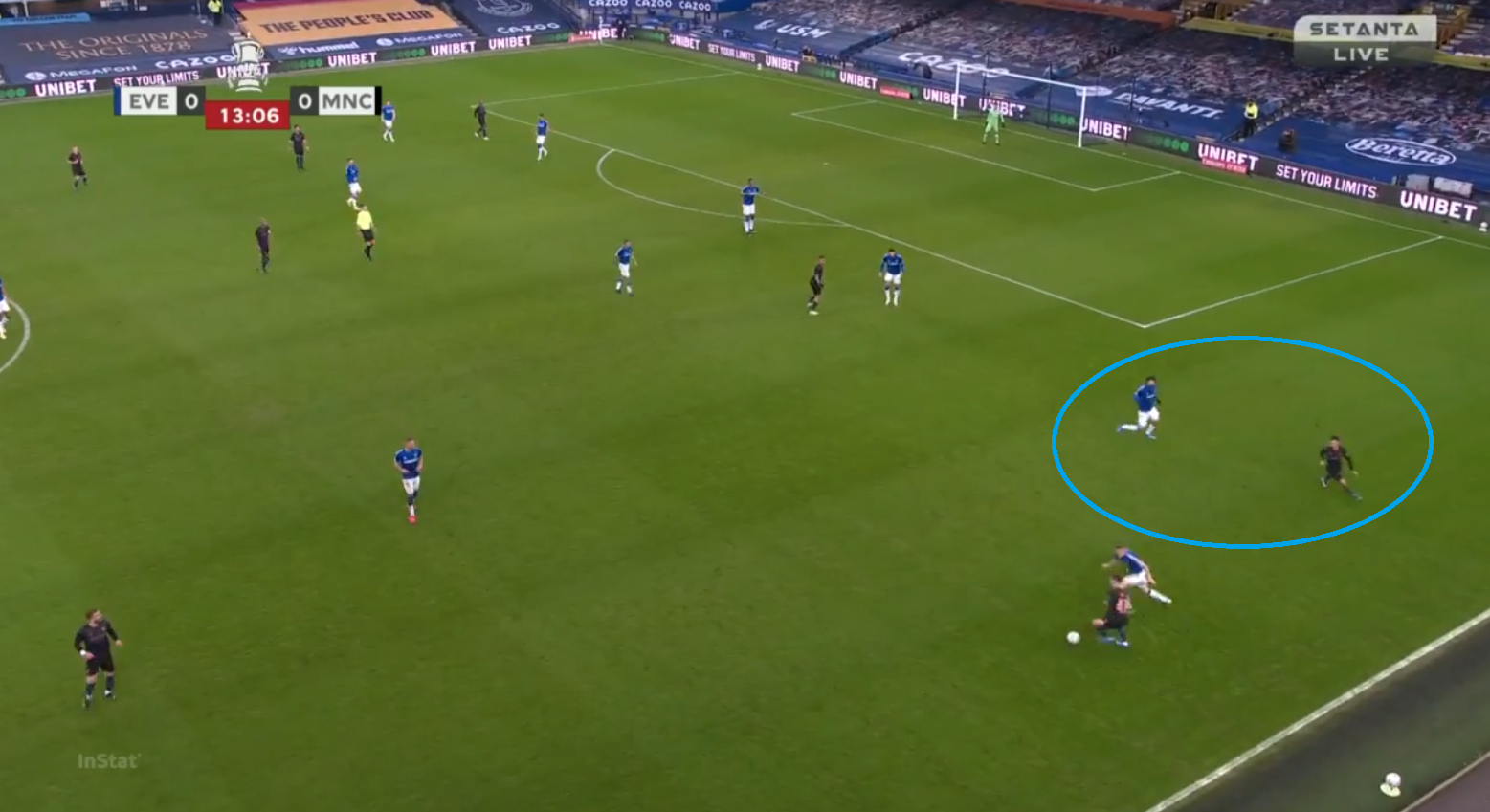 With a front two hovering near Fernandinho, City went with a 3-1 shape that saw one of their centre-backs take a central position while Kyle Walker, the full-back, would drop into the back three. We will discuss this in detail in another section of this piece.

The spacing between the City players was good and wasn’t entirely the reason behind their struggles to enter the final third. In fact, they showed good movement throughout the game that could have created numerous opportunities on any other day. We can see an example of this below, where initially Gundogan positioned himself close to Mason Holgate (right centre-back). When Zinchenko moved inwards, he dragged Seamus Coleman with him and Gundogan made an opposite run out wide, dragging Holgate out of position. Zinchenko then played a ball to Laporte which attracted Sigurdson. This gave the chance for Sterling to make a third-man run immediately into the space vacated by Holgate. But, Everton then re-grouped well and defended their box. 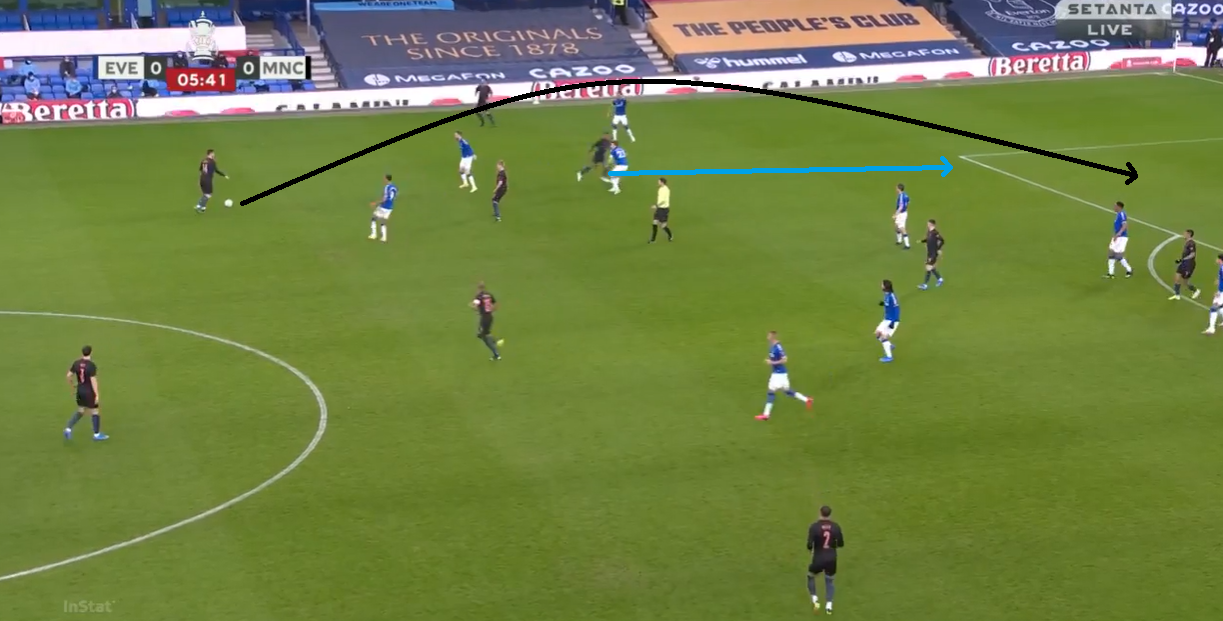 Everton continued their direct approach which has helped them in their top-four bid this season. They used Calvert-Lewin, in particular, to entirely skip the initial phase and move into the final phase of possession. Calvert-Lewin, so far, has always positioned himself on the shoulder of the opponent’s weakest centre-back in the air. Among the two City centre-halves, Laporte is considerably weak and they targeted him. 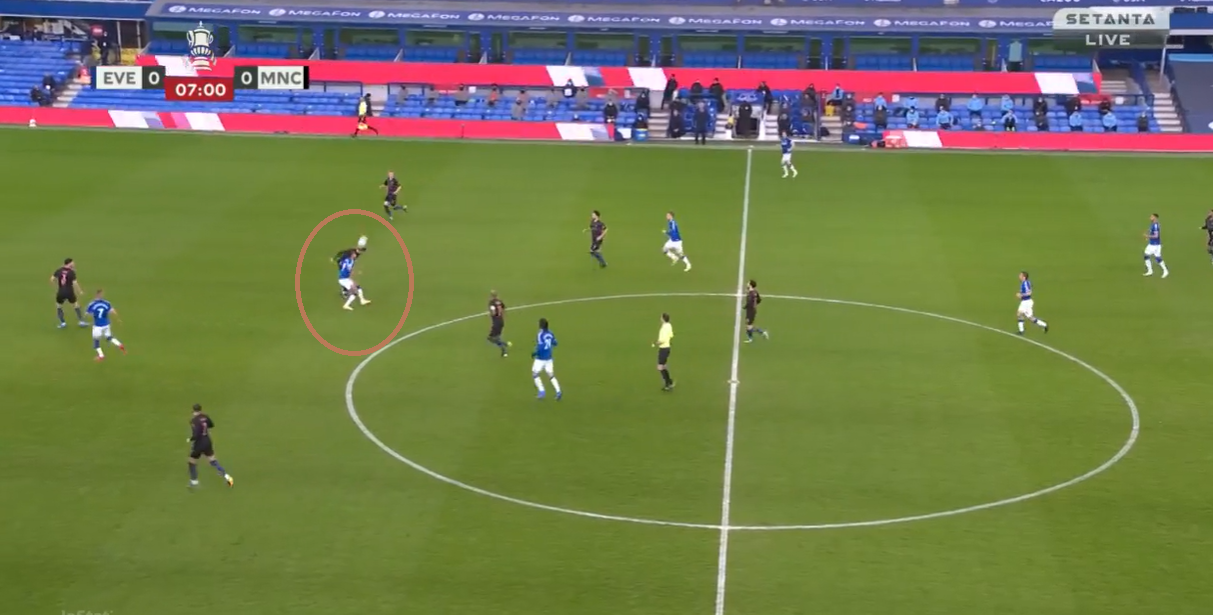 Richarlison positioned himself higher up the pitch to win the second balls that Calvert-Lewin directed behind after winning duels against Laporte. This eventually pinned the entire backline as more than a couple of players were behind to ensure that Richarlison did not have an easy go at the goal. This ensured that Everton had the numbers in front of him and any ball that fell in front of Calvert-Lewin could be won by the Toffees. City faced a dilemma as to how to position themselves in this situation.

With Everton man-marking City’s players effectively and also tracking their movements, the City players found it difficult to access the necessary space to make inroads. Despite getting a handful of chances they weren’t necessarily able to create until the 80th minute, when Pep rung in the changes to bring Kevin de Bruyne and Riyad Mahrez onto the pitch. De Bruyne’s arrival made a much bigger impact as he was positioned centrally as a false nine, and Pep shifted his shape to a 3-2-5 for the final 10 minutes. We can see KDB staying central, unlike Jesus who moved out wide – he held his position and this meant that City were able to create wide overloads. 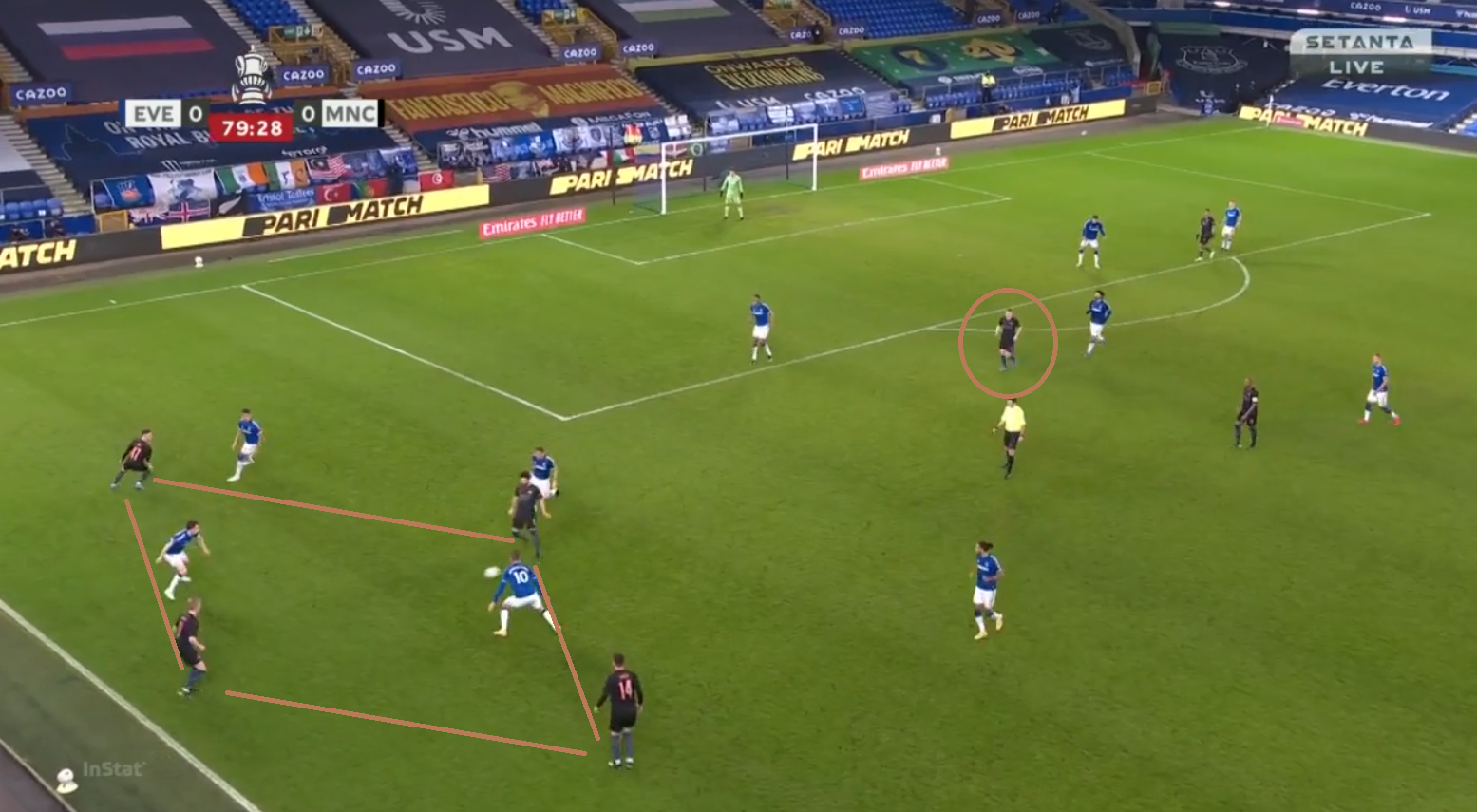 The shift to a 3-2-5 meant that now the two Everton forwards had to mark the two central midfielders in front of the defence. This gave the license for the City centre-backs to progress forward. Laporte did this for the first goal as his movement attracted the Everton defender towards him which left De Bruyne free. Now when the ball was passed to De Bruyne, his gravity attracted the others leaving Laporte free who then took a shot. The rebound was then slotted in by Gundogan to give City the lead.

Eventually, City scored another late goal to knock Everton out and book a place in the semi-finals of the FA Cup. The win kept Manchester City on track in their quadruple ambitions for the season as Guardiola looks for a clean sweep of all the trophies his team has been contesting in.