The first game of day four of the FIFA 2022 World Cup began with a close affair at the Al Bayt Stadium. Morocco met Croatia in a game where both teams knew that starting off with a win could heavily bolster their chances of progressing through the group, with the knowledge of facing favourites Belgium later down the line where a defeat is more likely.

Later in the day, Belgium beat Canada 1-0, although Canada showed promising signs of a side that could well progress to the knockout rounds. Both Morocco and Croatia have two tough fixtures left in the group stages and will need to reach higher levels of performance to reach the knockouts.

This tactical analysis will focus on the tactics used by Croatia, to help them control the game. There will be an analysis of how Morocco attempted to get their foot into the game, and how both sides have shown weaknesses which they need to instantly improve on.

Morocco lined up as expected in the preview, apart from unfortunate absentee, Amine Harit, who unfortunately picked up a long-term injury in the final league game before the World Cup break. Aguerd started at centre-back, making his return after a lengthy spell out upon his introduction to West Ham.

Hakim Ziyech also returned to the lineup, after the new head coach arrived in September. Ziyech hasn’t played much club football at Chelsea, so patience may be required for him to get back to match sharpness. Sevilla man Youssef En-Nesyri also comes into the lineup, after a long spell on the bench for Sevilla. This is a Morocco team filled with talent, but full of players who can’t get up to full match fitness due to not being good enough for their clubs or due to injuries. 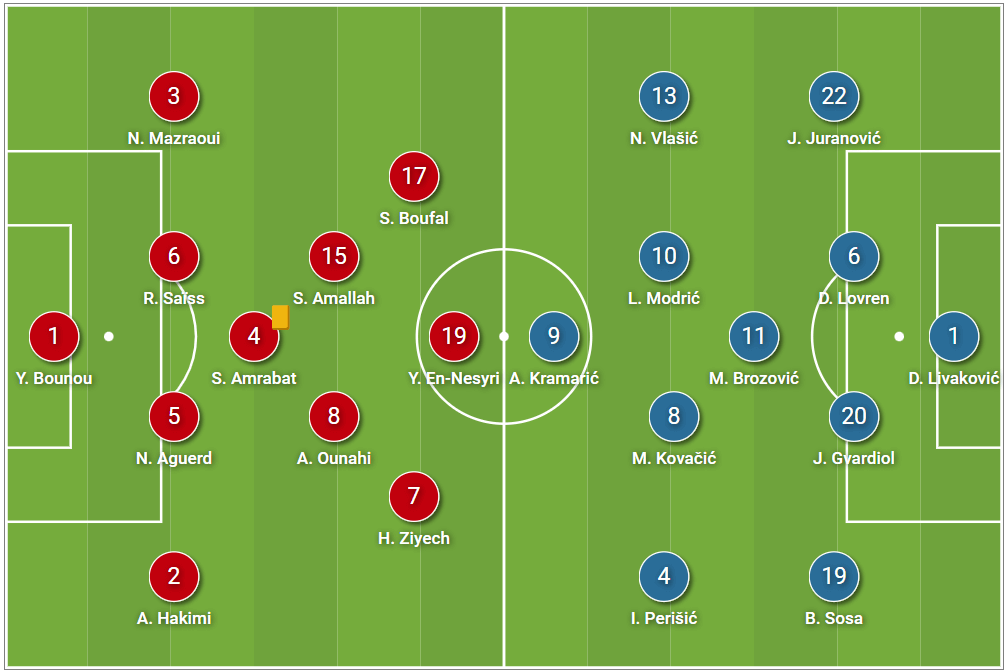 On the other side, returning finalists Croatia, stick with their 4-3-3 although the team is largely different to the one which helped them achieve such success in 2018. Only Modric, Brozovic, Lovren and Perisic kept hold of their place from the World Cup final, while Kramaric, Kovacic and Livakovic have earned their way to the starting eleven after the retirement of older players in the squad.

On the ball, Morocco attempted to find space in behind the Croatian back line. Croatia set up in a 4-5-1 off the ball, which attempted to force Morocco to play into wide areas. During the build-up, Morocco’s technical security across their back line allowed them to retain possession, however, they would struggle when advancing up the pitch. Croatia attempted to press the ball when in the mid-block, although this had inconsistent results.

Early on in the game, Croatia had more of a 4-4-1-1 shape where Modric would step out of midfield to pressure the Morocco back line, and force them into long balls. This was largely successful, although the team would struggle to win the ball back when they reverted back into the 4-5-1, which would happen after Morocco retained the ball and escaped the original press.

When Croatia were set up in a 4-5-1, the wide central midfielder would step out to press the opposition centre back, whilst the striker marked the pivot. The distances to pressurise the ball were too big, however, and so Croatia would lose their shape, whilst also allowing the Moroccan players to make their pass.

This example below shows us how Modric attempts to press the ball, but cannot get there in time due to a large amount of ground he has to cover. As a result, Romain Saiss played the long ball over the top to Boufal, who made a run in behind the Croatian back line which is quite high, attempting to prevent Morocco from playing in between the lines. The long ball was Morocco’s most effective way of creating chances, but due to poor execution, they failed to make the most of the chances. 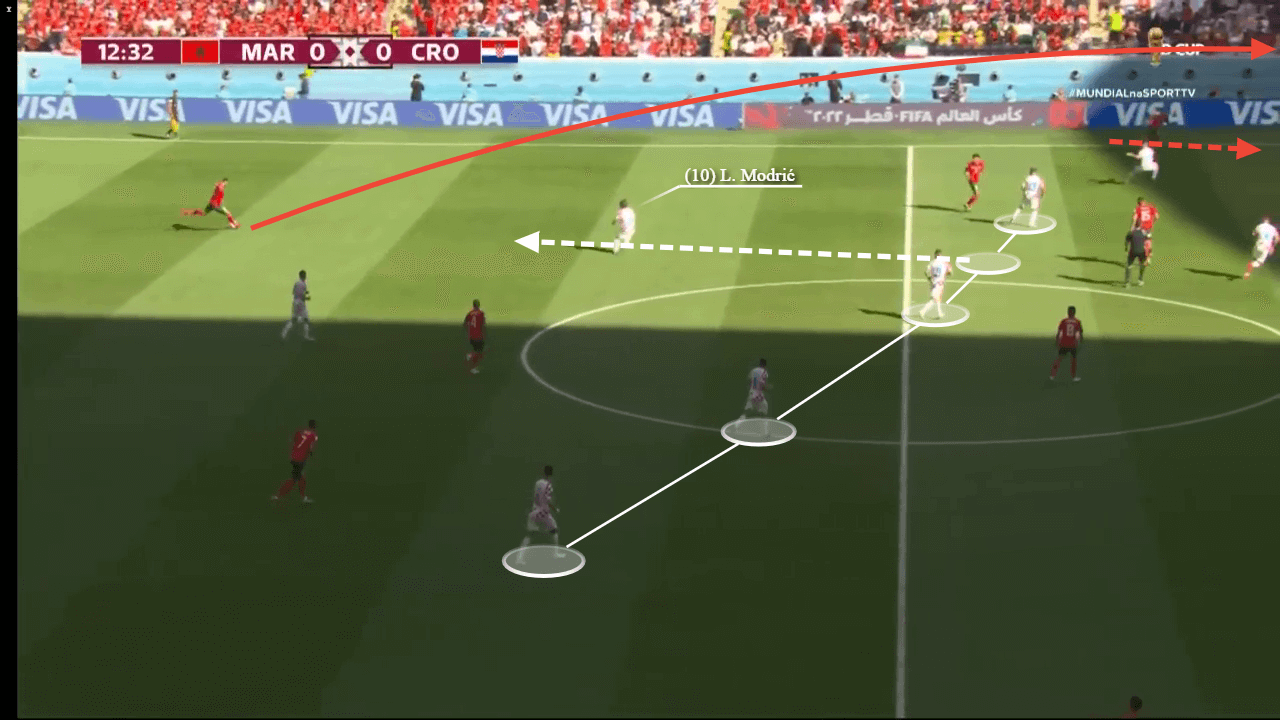 Morocco’s failure to get a hold of the game, and dominate possession, was a result of their own sloppy play. While Croatia done well to attempt to press the ball, it was often very passive and the intention wasn’t always right. Rather than counter-pressing, the Croatian players would try to get back in their shape during defensive transitions, which left them very open at times.

In the example below, we can see all the Croatian players running back to their own goal, and protecting the space, rather than attempting to delay the ball carrier from playing a forward pass. Amallah is allowed to carry the ball up the pitch, but whilst he attempts to switch the play, a poor pass leads to a turnover of possession, and Perisic wins the ball in a dangerous area.

From a spot where four Croatian players were out of position, Amallah could have launched a counter, but instead threw away a golden opportunity. The Spurs wing-back nearly goes on to score a tremendous long shot after winning the ball back. 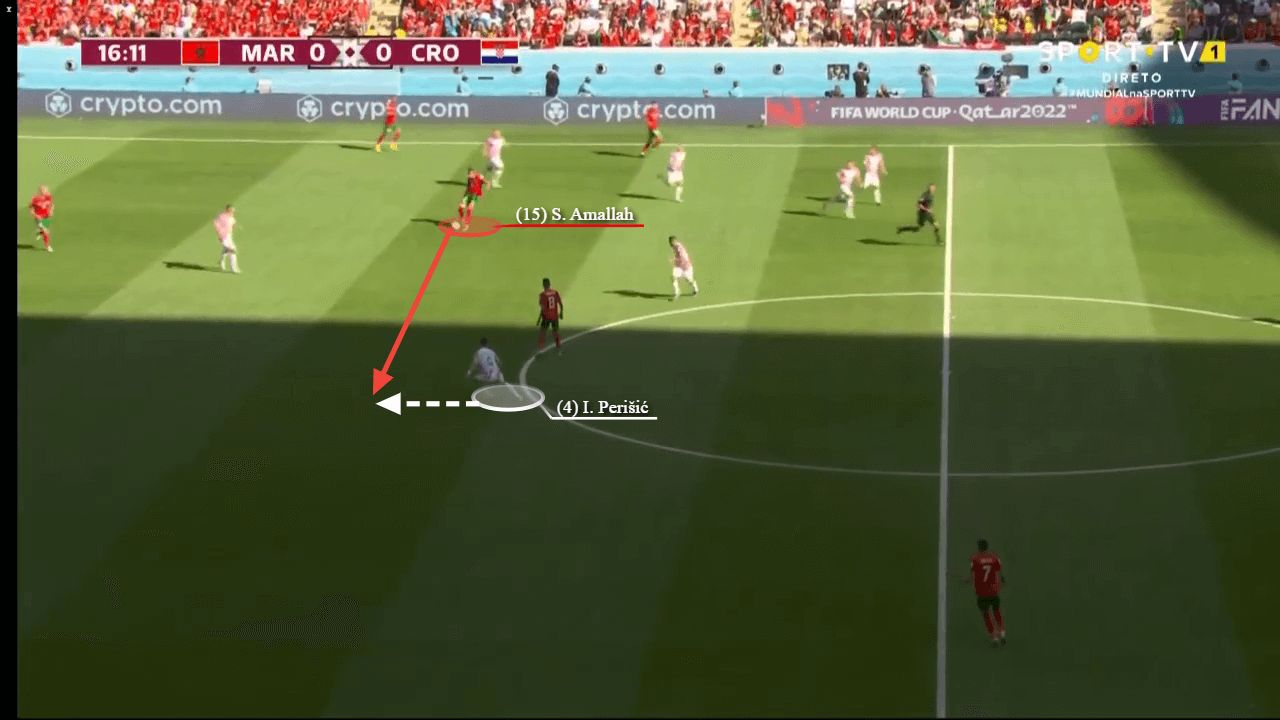 Below, is another example of a sloppy pass from Morocco which nearly becomes costly. A simple pass from Mazraoui could start a Moroccan counterattack against three defenders, but instead, the pass is mishit which leads to a dangerous Croatian opportunity. 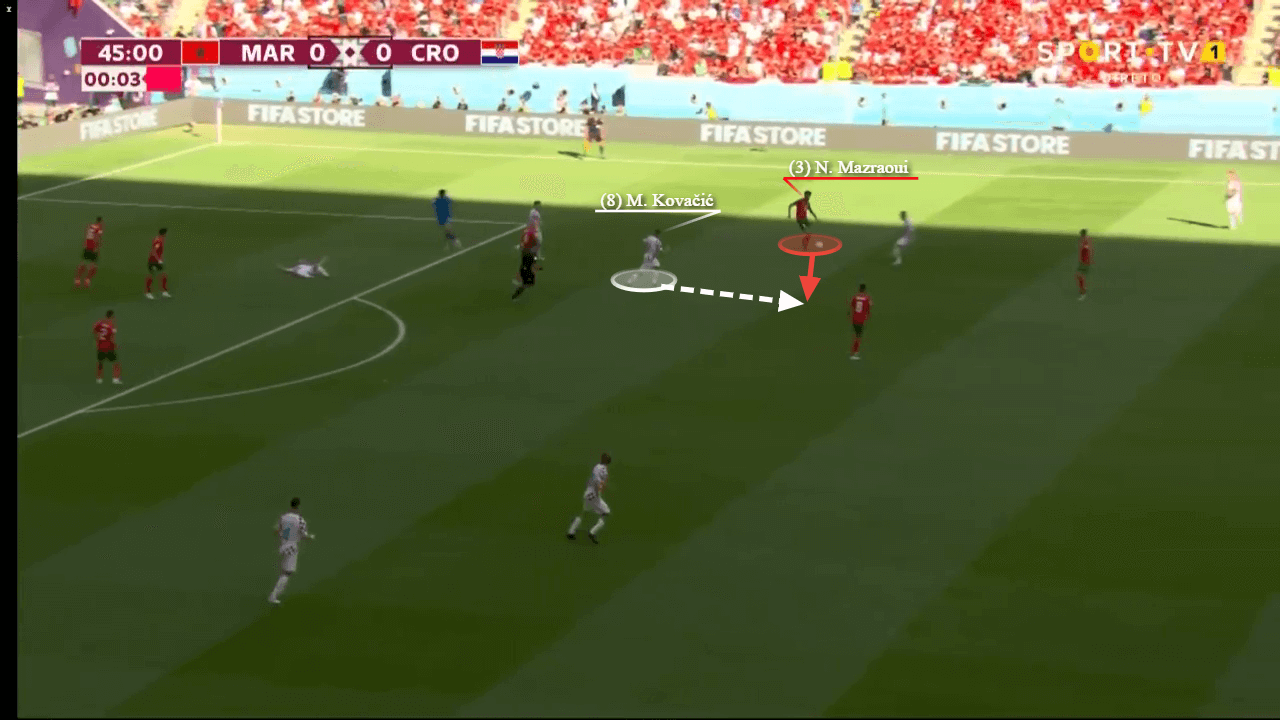 From the poor pass we saw above, a potential Morocco counterattack turns into Croatia’s best chance of the game. This was not down due to great counter-pressing or individual defending, but rather just a lazy pass which summed up the game. After Croatia win the ball back, they use Sosa’s overlapping run to deliver the ball into a dangerous area, where Vlasic nearly scores, only to be stopped by a great save from Bono. 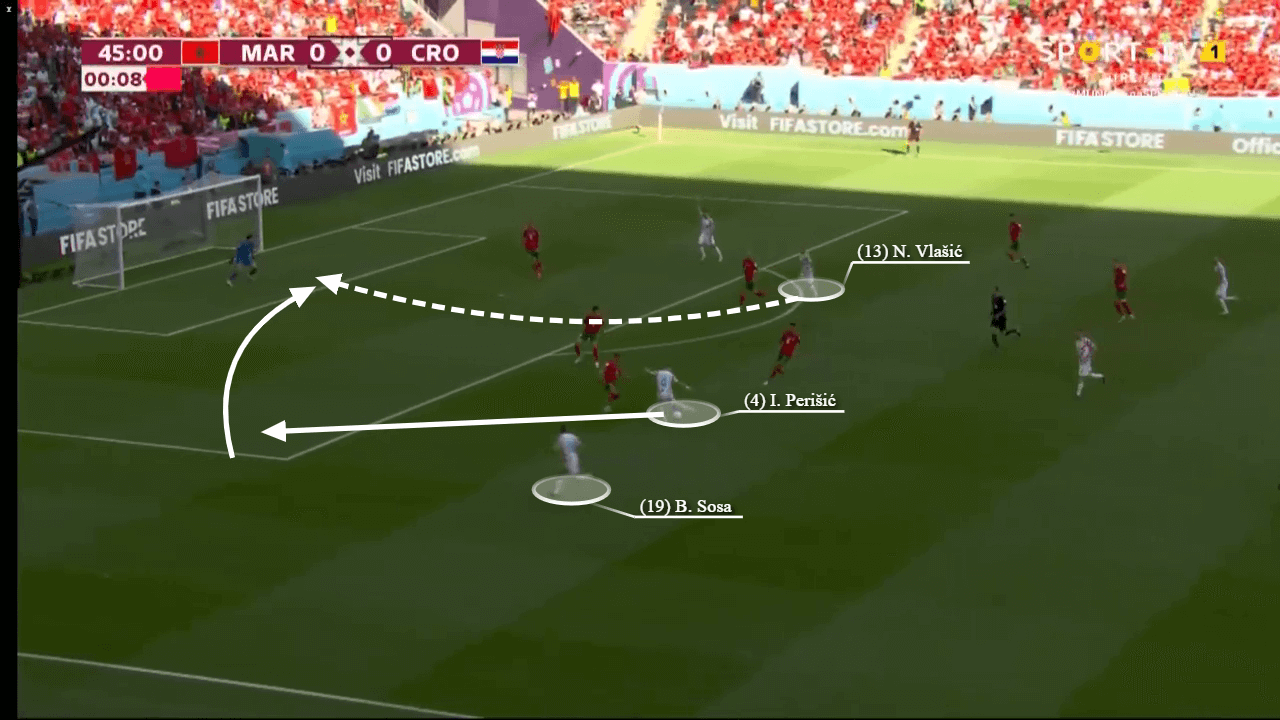 When Morocco did keep hold of the ball in Croatia’s half, they attempted to exploit the space behind the defensive line rather than playing through the block. This is evident with En-Nesyri’s match-high 70 sprints during the game. He had to chase balls in behind constantly and attempt to create chances for himself through his own skill. In the example below, we can see Boufal play a ball into the box, for En-Nesyri to attempt to control, although he couldn’t do enough to bring it down and get a shot off at goal. 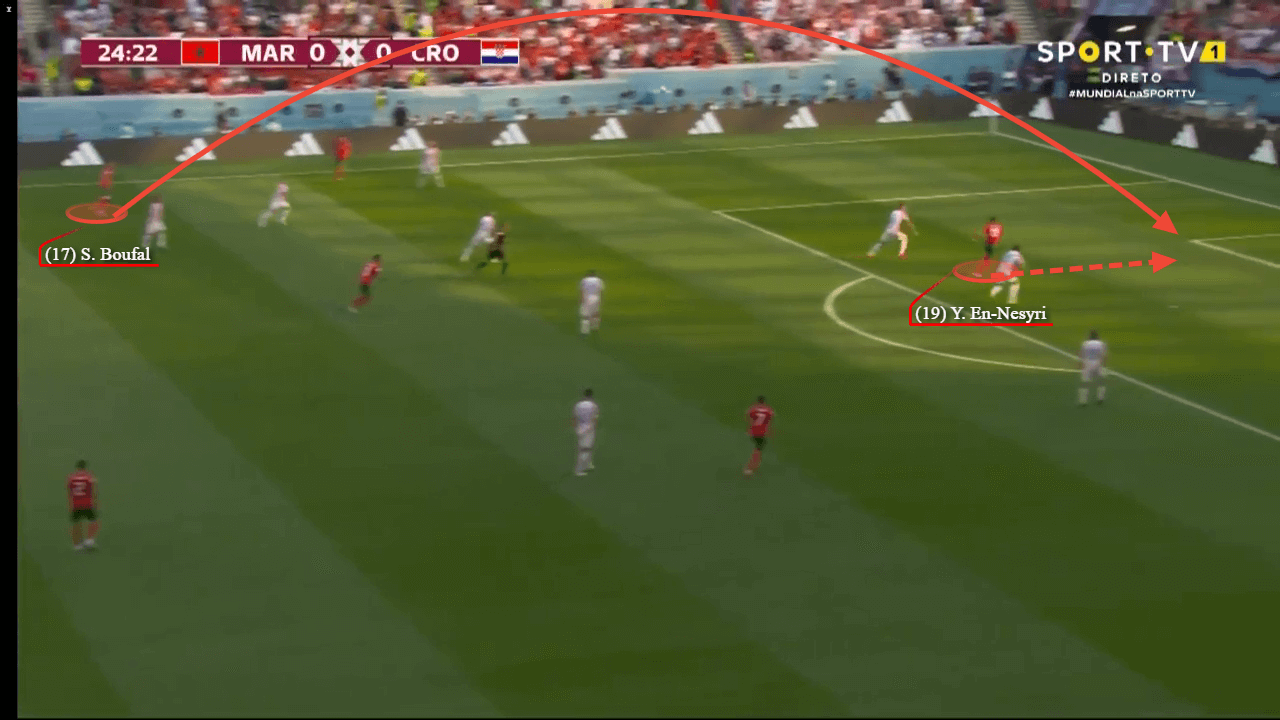 Hakim Ziyech was used on the right-hand flank, to deliver balls into the box from deeper areas. Only 1/26 final third entries came through the half-spaces, which shows Morocco’s hesitance to combine centrally. The technical drop-off in quality from Harit to Amallah can be attributed to that.

From the wide right, we can see Hakim Ziyech deliver a delicious ball towards the back post, which is millimetres from making contact with a Moroccan header. 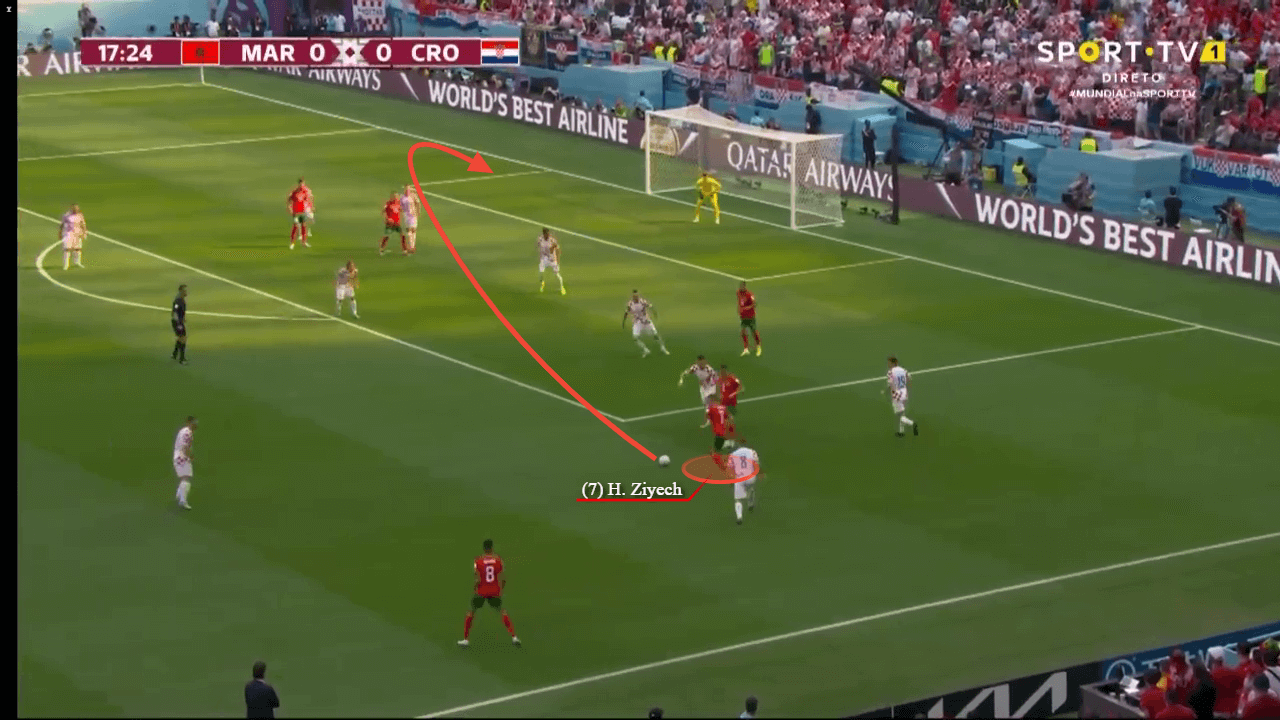 Below is yet another example of how Ziyech crosses the ball into the box, even when by the halfway line. The other Moroccan players are hiding, and Ziyech is forced to either be direct or give it to Hakimi who would then end up at a dead end.

It has been quite a common occurrence, at the World Cup, to see teams split into two, with one line of players all making runs in behind, while the defensive line stays back in their spots. As a result, no one is available to progress the ball up the pitch, and so we have seen a large amount of wasted long balls. The middle of the pitch is usually left empty, so people cannot progress the ball like they would at club football. 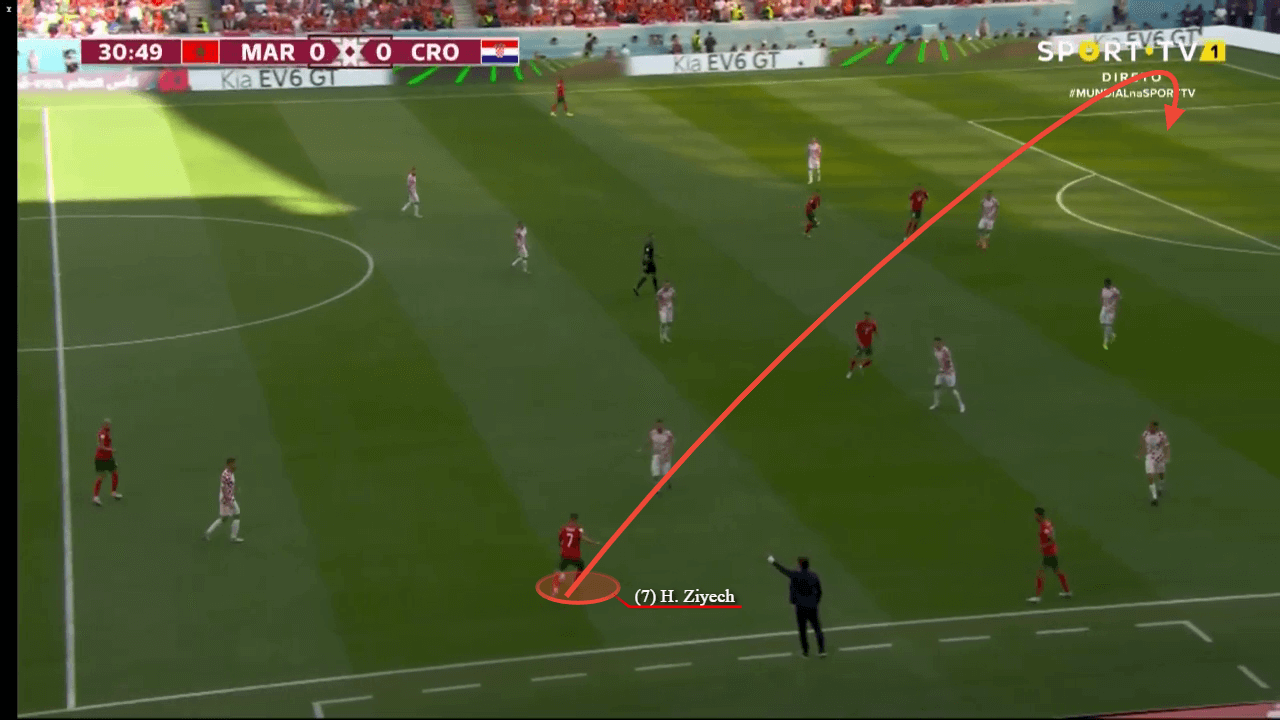 Croatia dominated the ball with 57% possession. They were able to do this as a result of their brilliant technical quality in midfield, whose press resistance prevented Morocco’s players from being too brave, and Morocco’s players were smart enough to hold their shape.

Below we can see that Modric helped progress the ball up the pitch by breaking the line. Luka Modric’s 29 line breaks was a match-high and a key to how Croatia would begin their attacks. 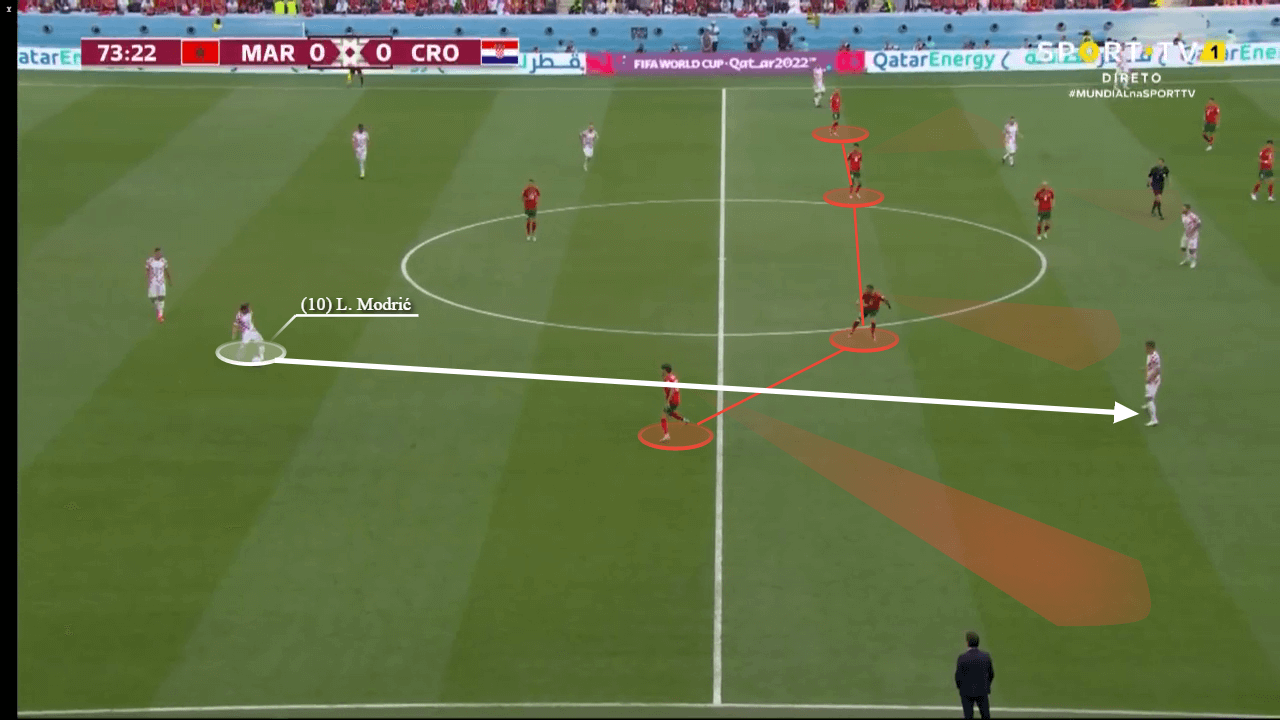 In advanced areas, Croatia attempted to use a 2-3-5 shape, however, the players weren’t suited to such a way of playing. Perisic and Juranovic both stayed high and wide to stretch the Moroccan defence, but both players aren’t good enough at 1v1 dribbling to cause problems for opposition fullbacks when isolated. In the half-spaces, Vlasic and Kovacic both have technical security but lack the decision-making and final third threat to be effective. They weren’t able to find the gaps in the defence and lacked the incisiveness to do so when gaps appeared. 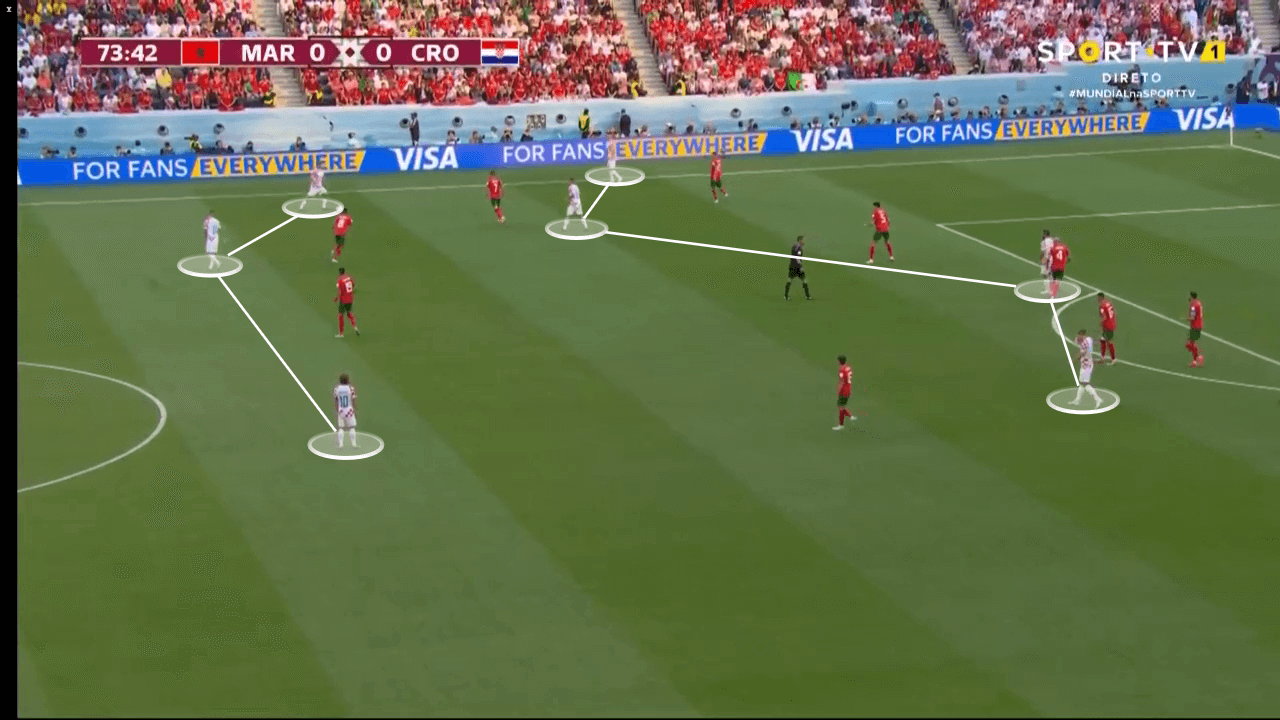 Furthermore, there were occasions where Croatia appeared to lose structure which caused a lack of progression in their play. The lack of the right profiles in required roles resulted in Croatia not being as fluid as they could. Vlasic often made runs forward when was supposed to help receive the ball to feet, while Perisic came to feet when he should’ve stretched the pitch. The lack of positional structure allowed Morocco to easily force the ball backwards when Croatia should have easily played it around them. In the image below we can see how 4 players are nearly on top of each other, and a large open space is left empty. Had the players been in the right spots, Croatia could have simply shifted the Morocco block from side to side, and played it up the pitch to a player stretching the defence, in an isolated role. 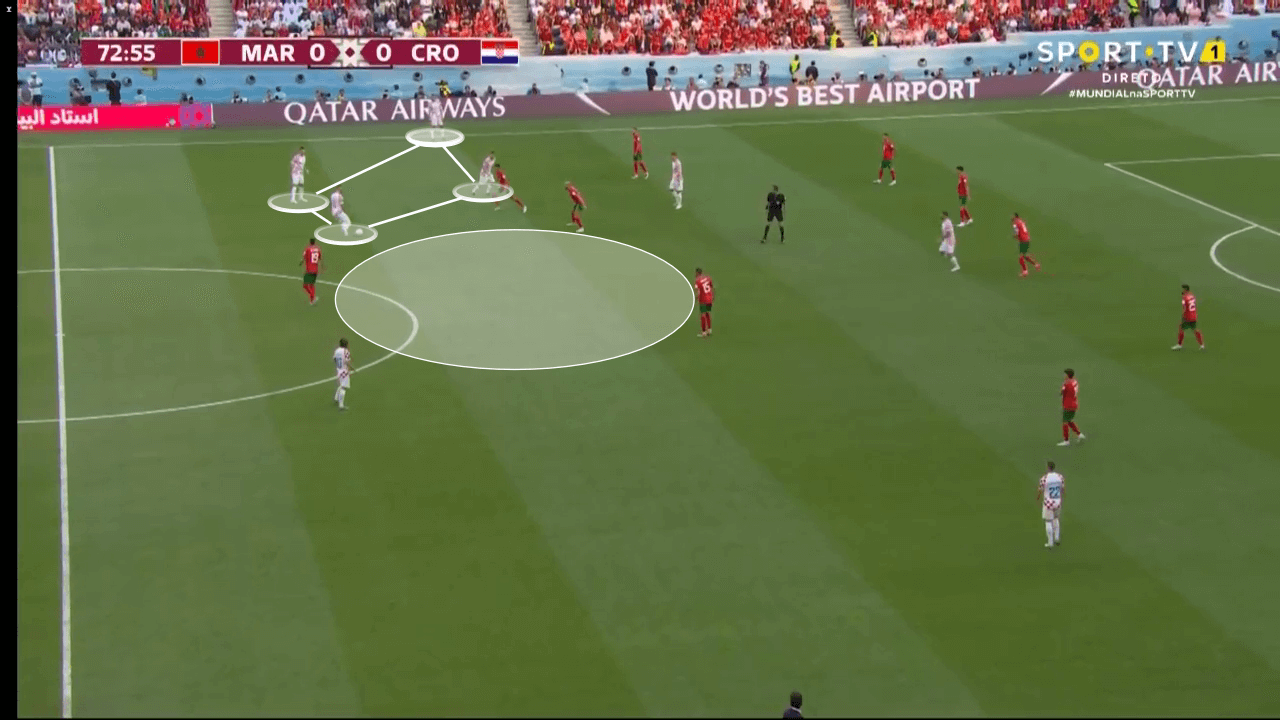 This tactical analysis has detailed how Croatia retained the ball due to individual quality but struggled to create chances in the final third due to poor dynamics. Furthermore, Morocco’s lack of focus in their own half also prevented them from getting much control in the game.

In future games, should both teams continue like this, Morocco will continue to defend games for long spells, while Croatia will struggle for goals. A dynamic runner and confident dribbler like Orsic could help change the fortunes for Croatia, who will face a challenge in beating either Belgium or Canada if they are to progress to the knockout phase. 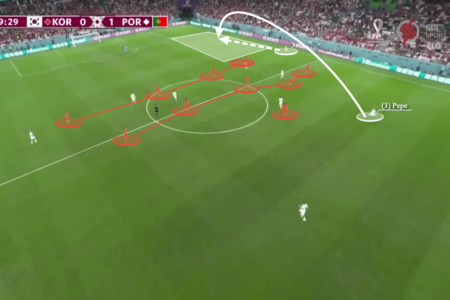 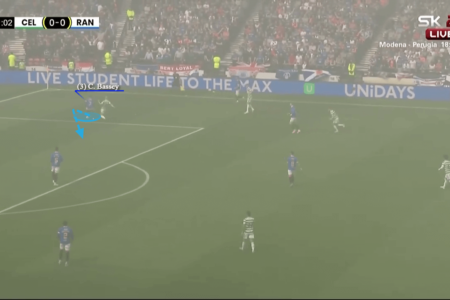 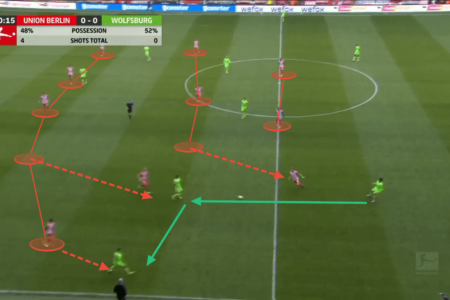