This midweek, Tottenham came from behind to secure a penalty shootout victory over Chelsea in the fourth round of the EFL Cup. Timo Werner opened the scoring with his first competitive goal in English football, after hitting a powerful strike from just inside the area. The Blues coasted through the first half against a passive Spurs side who failed to threaten until the interval. However, the balance of power shifted in the second period, and the home side got on top. Their pressure paid off with seven minutes to go, as Eric Lamela converted from a Sergio Reguillion cross.

From there, we saw no further goals in normal time, and the London derby went straight to penalties. Jose Mourinho’s side held their nerve to win the shootout 5-4, as Mason Mount put the decisive spot-kick wide.

This tactical analysis will delve into the tactics used by these two London rivals in a game that wasn’t blessed with many clear goalscoring opportunities. 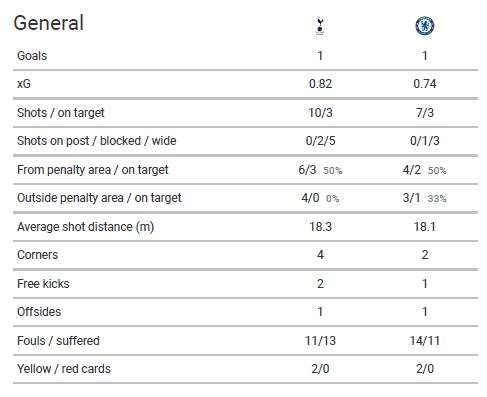 Jose Mourinho set his team up in a 5-3-2 system from the start, although he changed to their more usual 4-2-3-1 shape in the 70th minute. Hugo Lloris started in goal, with Japhet Tanganga, Toby Alderweireld, and Eric Dier playing in central defence. Serge Aurier and Sergio Reguillon played at wing-back while Moussa Sissoko, Gedson Fernandes, and Tanguy Ndombele started as the midfield three. Steven Bergwijn and Erik Lamela played up front in the absence of a recognised striker. 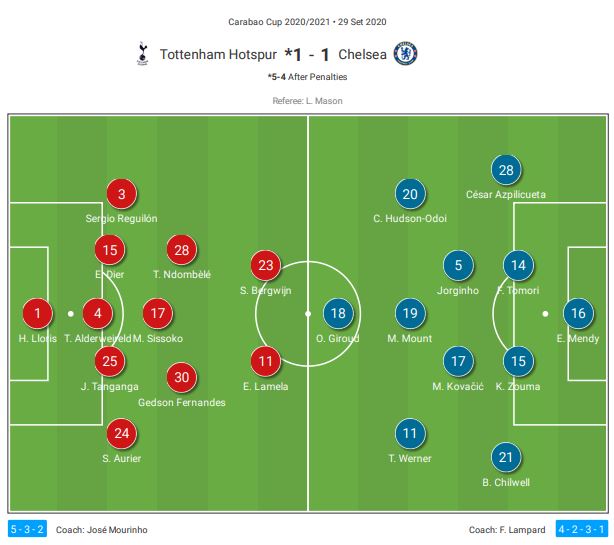 Frank Lampard opted to go with a 4-2-3-1 system. New signing Edouard Mendy replaced the much-maligned Kepa Arrizabalaga in goal. Cesar Azpilicueta, Fikayo Tomori, Kurt Zouma, and Ben Chilwell started at the back. Jorgino and Mateo Kovacic were the double pivot in midfield, behind the more attacking trio of Callum Hudson-Odoi, Mason Mount, and Timo Werner. Olivier Giroud led the line.

Passive Tottenham starved of the ball in the first half

In the first period, Tottenham produced the kind of performance we’ve been used to seeing from Jose Mourinho teams in recent years: defensive, passive, and lethargic. But it’s actually fair to suggest that this was a deliberate ploy by Mourinho. Were Tottenham trying to conserve energy to cope with their ridiculous schedule, which sees them play a European qualifier just 48 hours after?

Chelsea enjoyed an easy ride up to half time: they had 71% of the ball without really getting out of second gear. Spurs set up to frustrate their visitors, by forming a narrow box shape in midfield. The front two didn’t press Chelsea’s defenders or defensive midfielders aggressively at all. Instead, they’d look to sit behind the ball, keeping a short distance between themselves and Spurs’ midfield three. The three midfielders would mark zonally, ensuring that they stayed narrow. 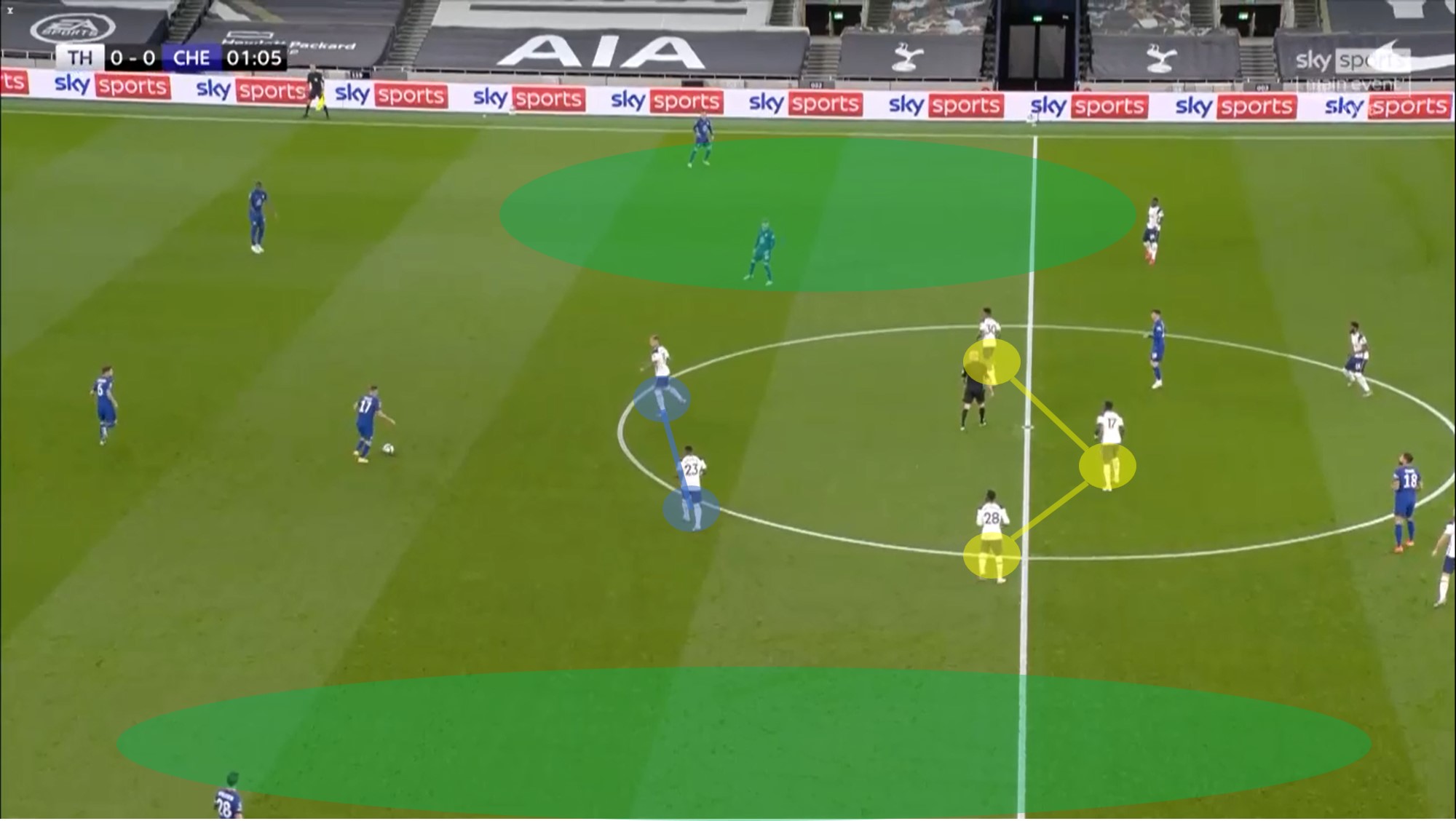 Between them, they formed a block of five to stop Chelsea progressing the ball centrally. By flooding the centre of the pitch, it was difficult for the Blues to find their central players in pockets of space between the lines of the Tottenham midfield and defence. However, this meant that Chelsea had acres of space in wide areas, as Spurs’ wing-backs stayed fairly deep instead of jumping out to press. The Chelsea full-backs maintained wide positions, constantly providing an out ball. Due to Tottenham failing to put any pressure on Chelsea’s central midfielders, they always had time and space to switch the ball from side to side easily. By doing this, they hoped that they’d be able to stretch Spurs’ defensive structure horizontally, and would patiently wait for gaps to appear.

Alarmingly though, Spurs’ lack of pressure on the ball wasn’t only evident when the away side had possession in deeper areas. In the image below, Azpilicueta has advanced towards the final third. 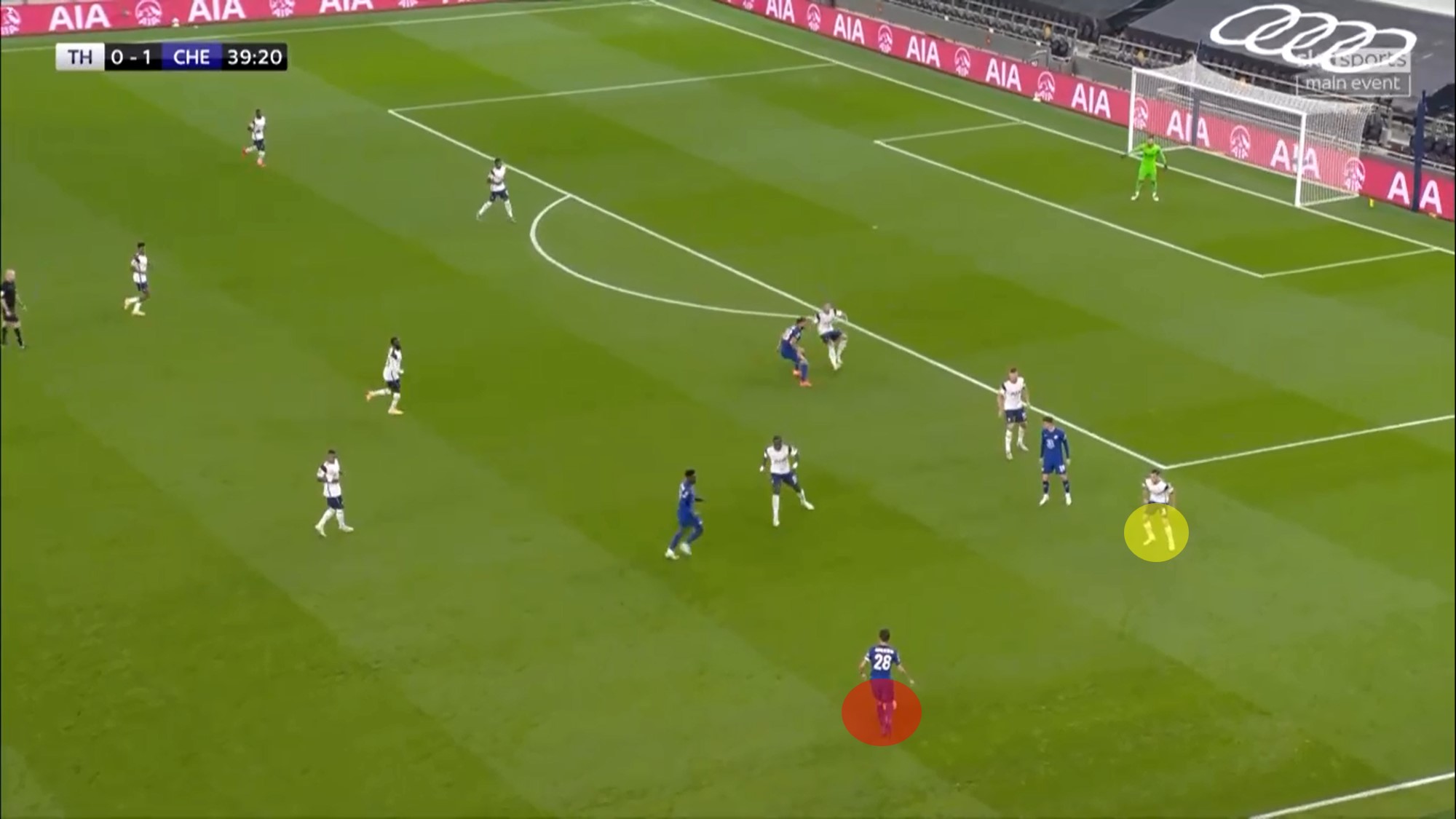 No Tottenham player is within a close enough distance to either win the ball or rush their opponent into a mistake. This lack of pressure all over the pitch resulted in Frank Lampard’s side starving Tottenham of the ball. As well as only seeing 29% of the first-half possession, Spurs could only muster a dire xG of 0.02 before the break. In fairness though, Chelsea did find it pretty difficult to play through their compact defensive structure. A lot of their passes were backwards and sideways, which Chelsea were happy with whilst leading 1-0, but it’s not like they were penetrating the Spurs defence at will. This screenshot is from the opening minute of the second half, but the theme of Spurs being difficult to play through continued after the interval. 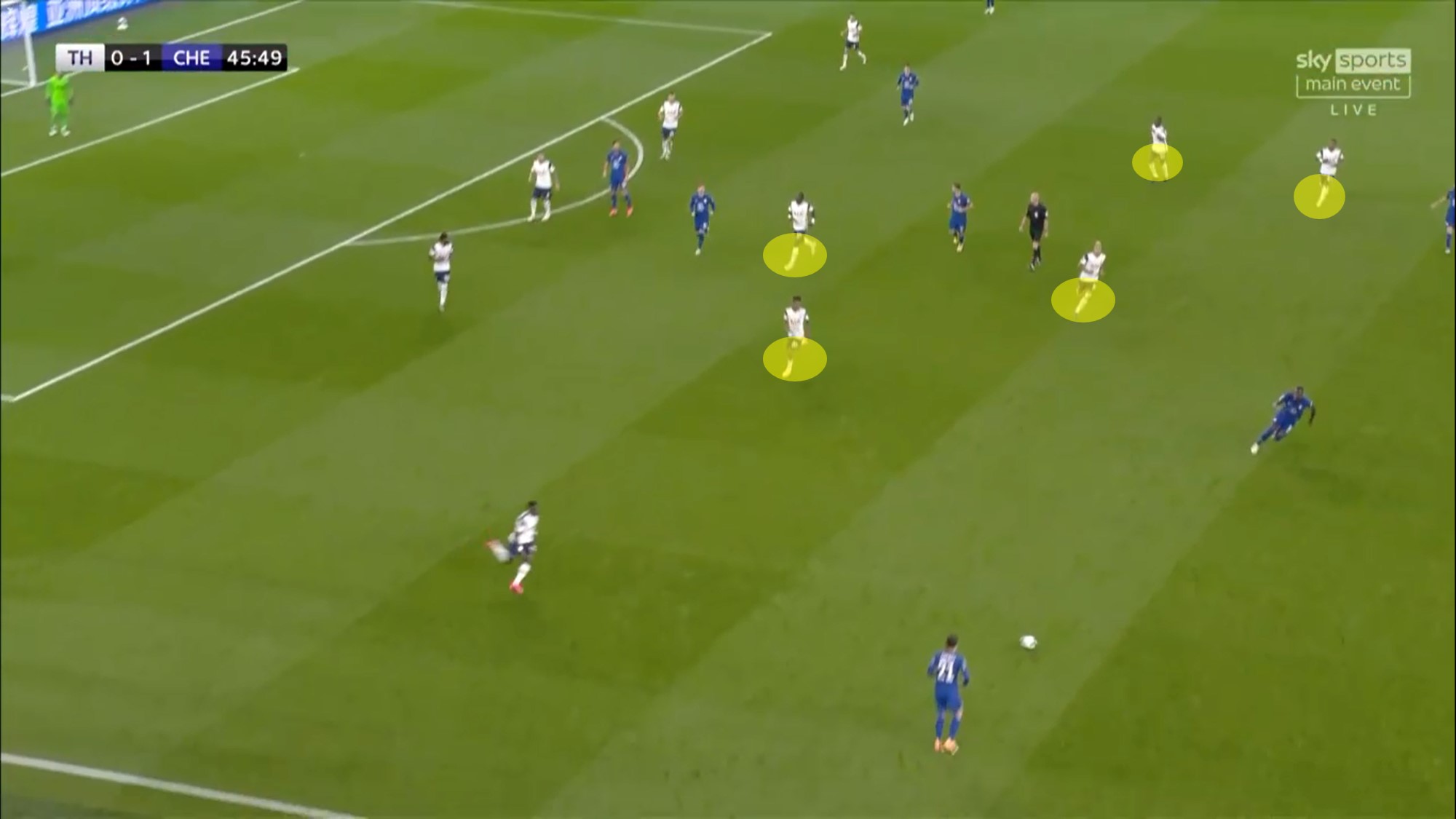 As you can see, the five Spurs players have overloaded the middle, stopping Chelsea from playing a progressive pass into one of their attacking midfielders.

Chelsea’s pressing helps them coast through the first period

In the first half, Chelsea were helped by some passive Tottenham defending, but they also managed to stop Spurs stringing many passes together. Their focus was on pressing Mourinho’s men high up the pitch and trying to turn over possession in dangerous areas. Failing that, they’d force Tottenham to go long by applying pressure to the man on the ball, whilst cutting off his nearby passing lanes. When they were forced to play long, Chelsea’s two central defenders had the beating of Bergwijn and Lamela in the air. And after winning the initial contact, there was rarely a Tottenham player around to win the second ball as they took a cautious approach.

The next images show how Chelsea forced debutant Sergio Reguillion to play a long ball down the line. Their attacking players were stood on the edge of Tottenham’s box as they played a short goal kick. Whilst Eric Dier received possession in his own area, Callum Hudson-Odoi pressed him aggressively. This meant that he didn’t have the time to assess his options and play a progressive pass into midfield. 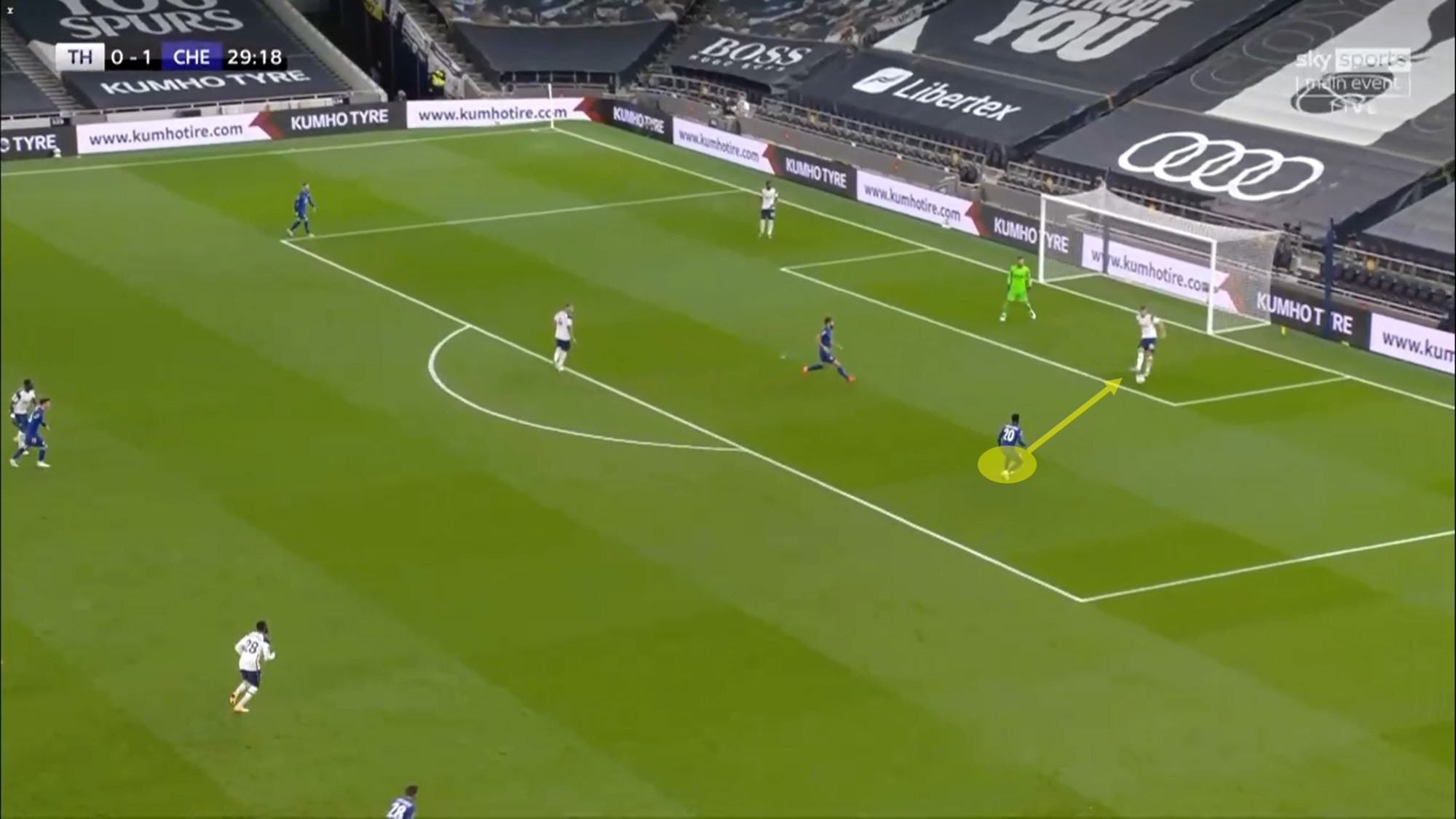 He then plays a ball to Reguillon. That’s the trigger for Blues right-back Cesar Azpilicueta to press high, to try and rush the Spaniard into getting rid of the ball. 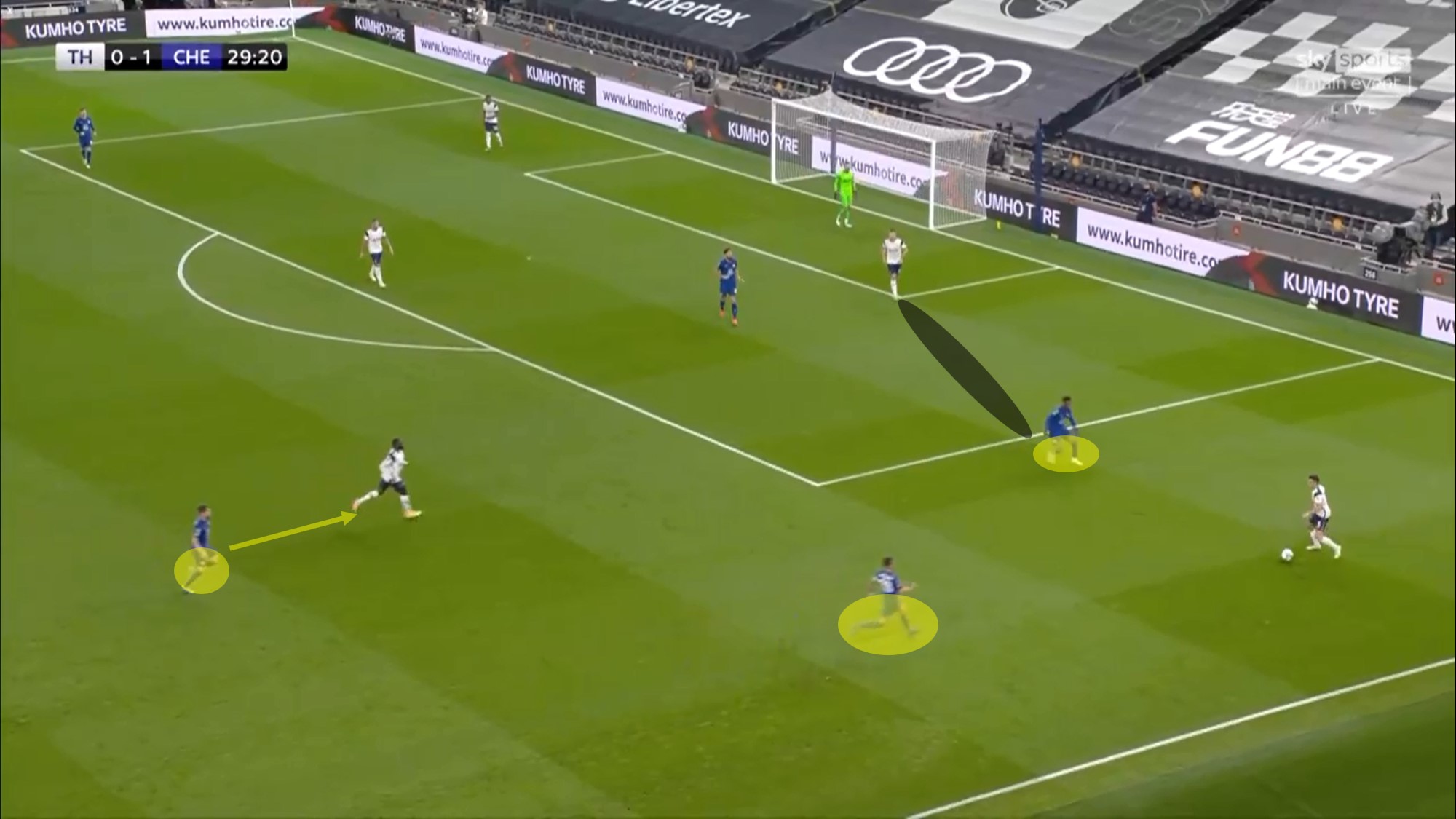 Hudson-Odoi has Dier in his cover shadow as he joins in the press, so Reguillon can’t play a simple ball back to him. Jorginho also pushes up to get close to Ndombele. A ball across the face of his own box would be too risky, so Reguillon is forced long. Due to Chelsea’s pressing, Spurs failed to enjoy long spells of possession.

The Blues also managed to force high turnovers in the Spurs half, picking the right moments to try and nick the ball. This is what they did in the build-up to the first goal. We also saw one of the downsides of playing a right-footed defender as a left-sided centre-back. In the image below, Eric Dier is about to pass the ball to Reguillon. Keep an eye on Azpilicueta, who bursts forward to press as soon as this is about to happen. 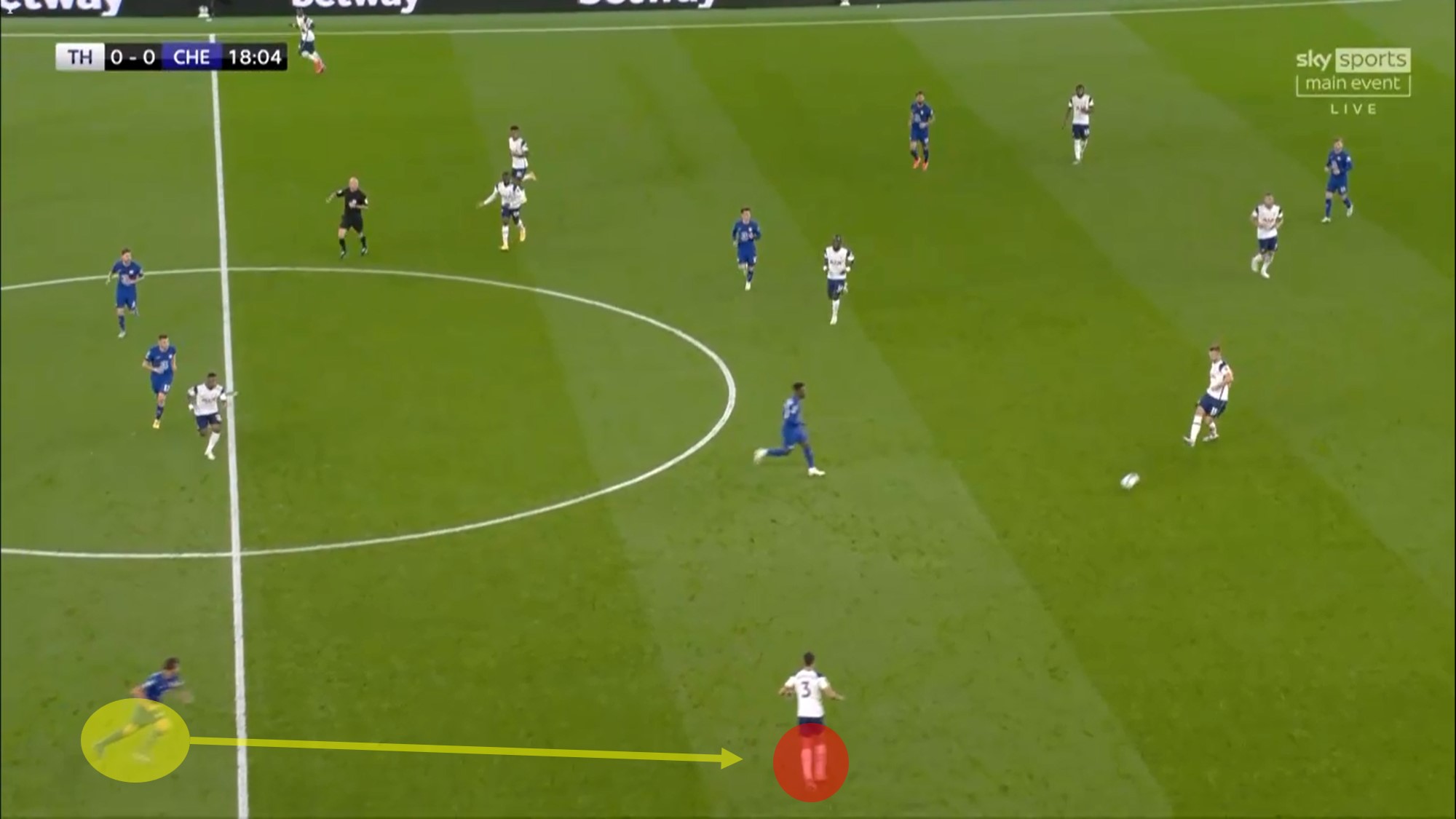 As Dier passes the ball to the left with his right foot, the natural trajectory of the ball is curving inwards towards Reguillon. If a left-footed player had made that pass, the ball would be curving slightly away from Reguillon, so he could take the ball in his stride, on the outside, with one touch. Instead, he has to come inside to control the ball first. Azpilicueta sniffs a chance to nick the ball because he’s forced to take that touch inwards. 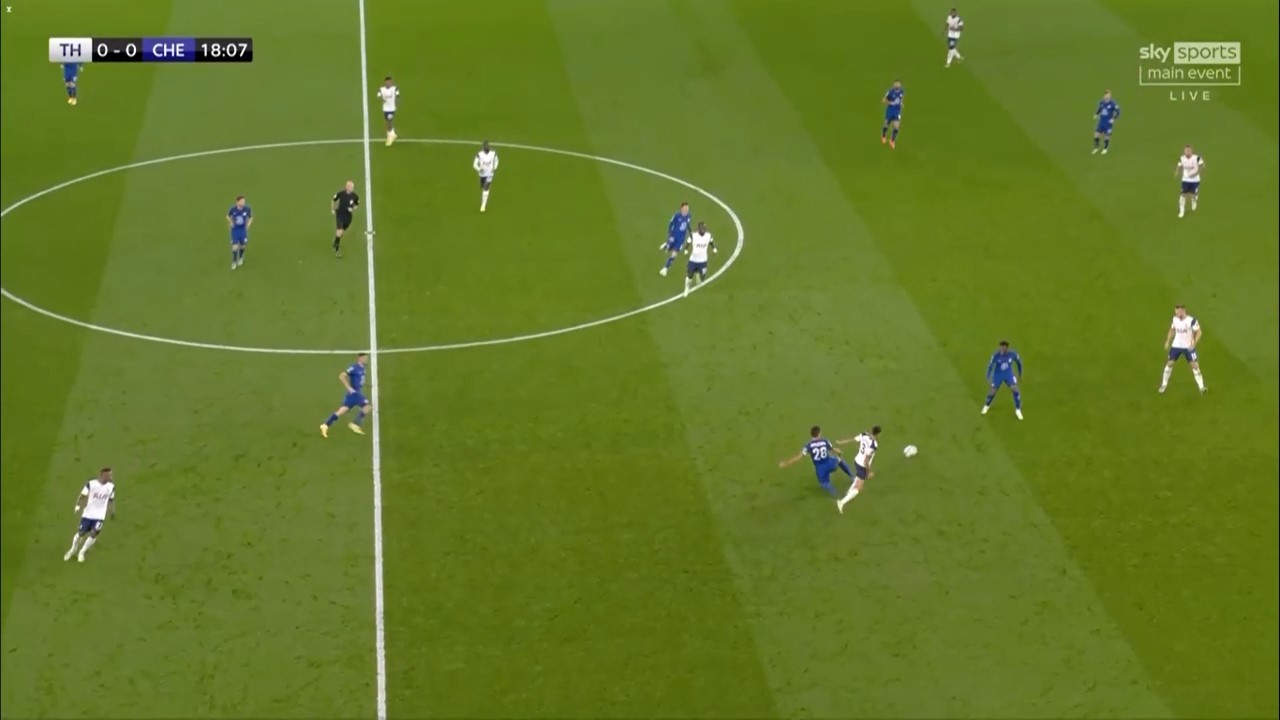 In terms of their attacking play, Chelsea didn’t create too many chances from positional attacks, despite dominating the ball for long periods. One of their best moves of the first half started in the image below, as Mason Mount asks for the ball in a relatively crowded centre of the pitch. 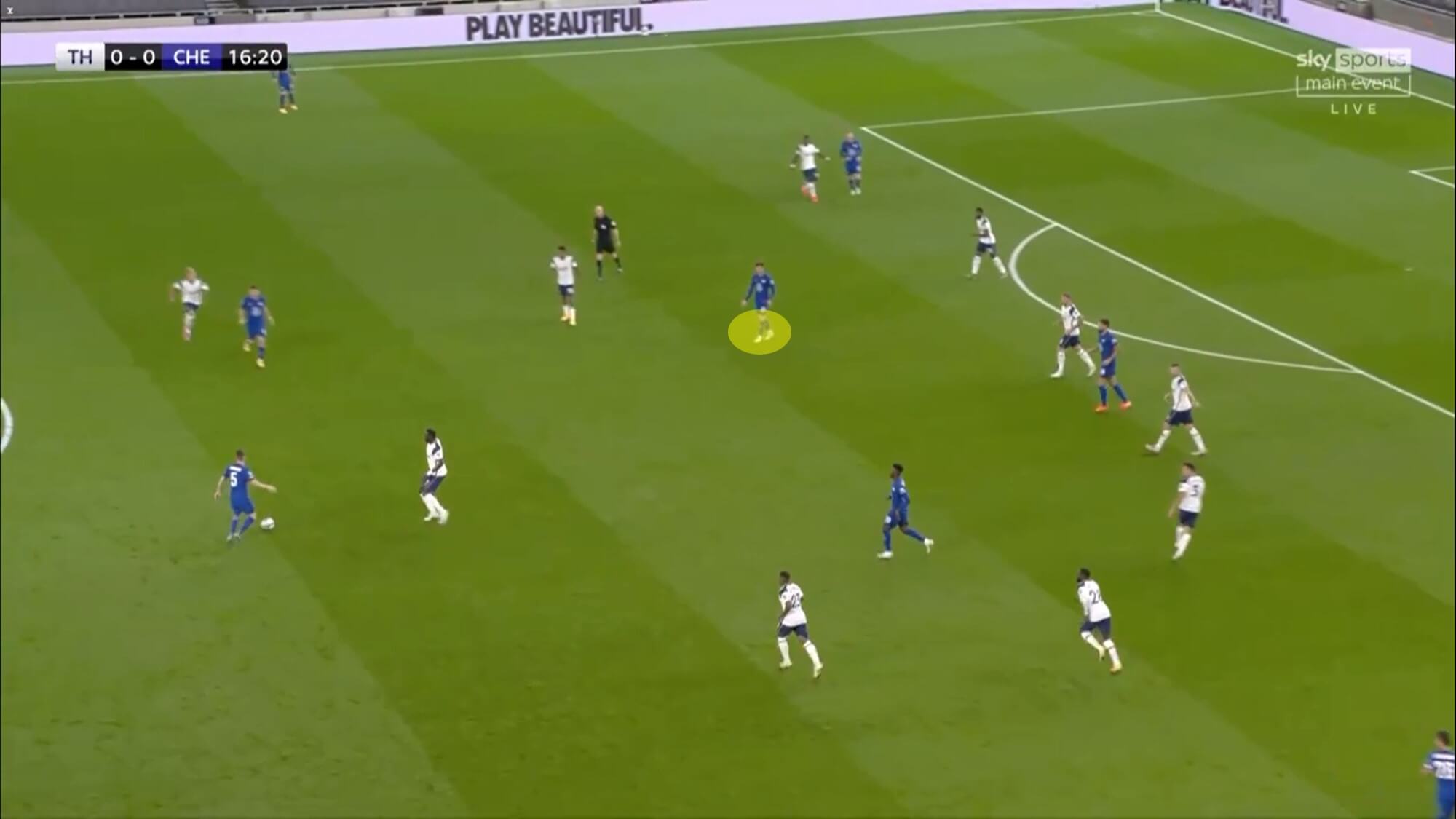 Lampard’s side then work the ball out to the left, and Mount makes an intelligent run into the wide space vacated by Serge Aurier as he closes down Ben Chilwell. 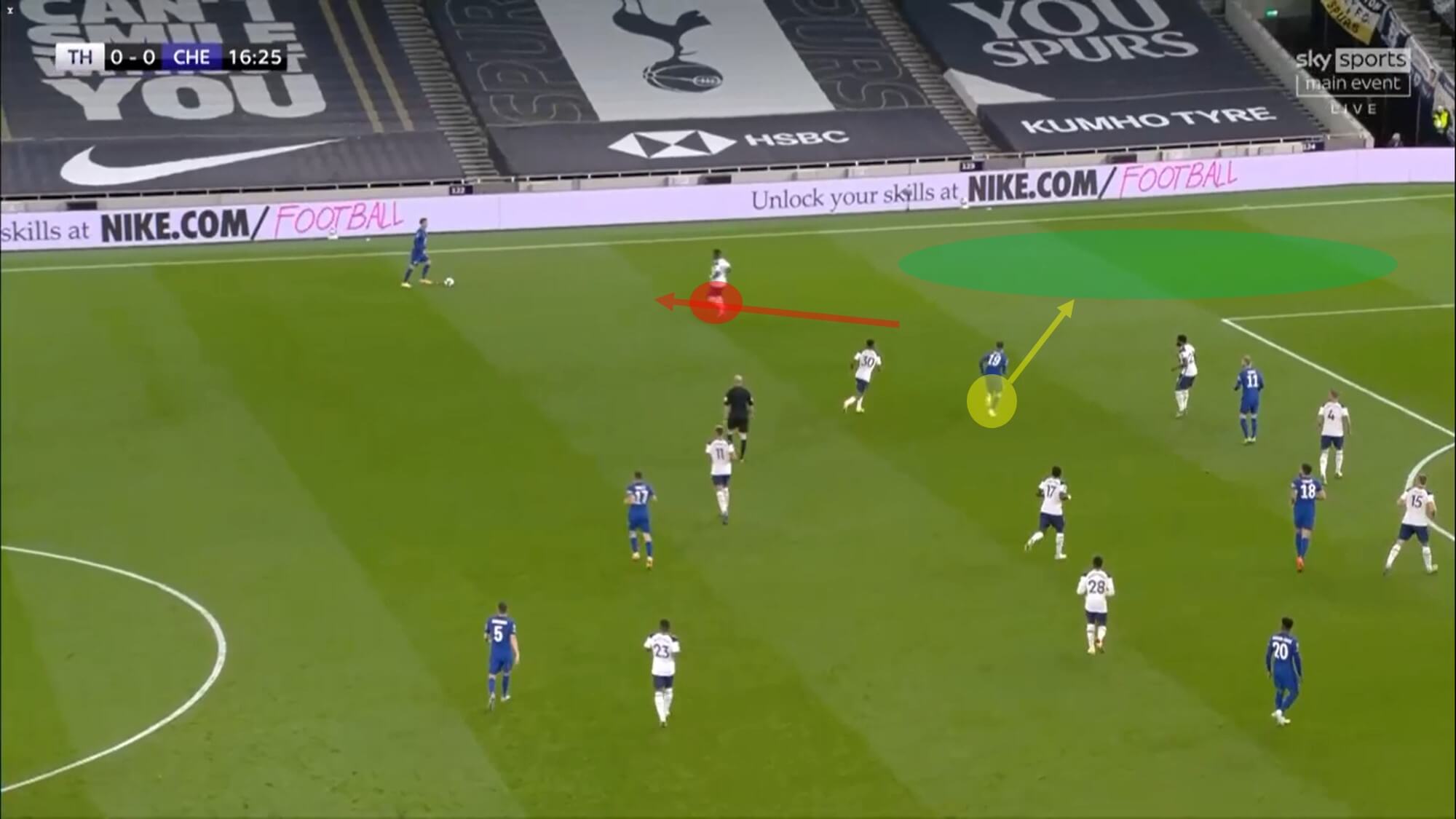 Mount then delivered a ball across the face of the box.

How the game changed in the second half

To get back into the game, Spurs desperately needed to change their approach. More aggression and intensity was required, and they managed to deliver that as they clawed themselves back into the game. In the first period, their PPDA (passes allowed per defensive action) was 23.1, and in the second half it went down to 6.6.

Spurs gave Chelsea a taste of their own medicine by pressing them high up in the second half, by trying to stop them from playing out of the back when they had a goal kick. Instead of sitting deep, Spurs would hunt in packs when the ball went out to the full-backs. 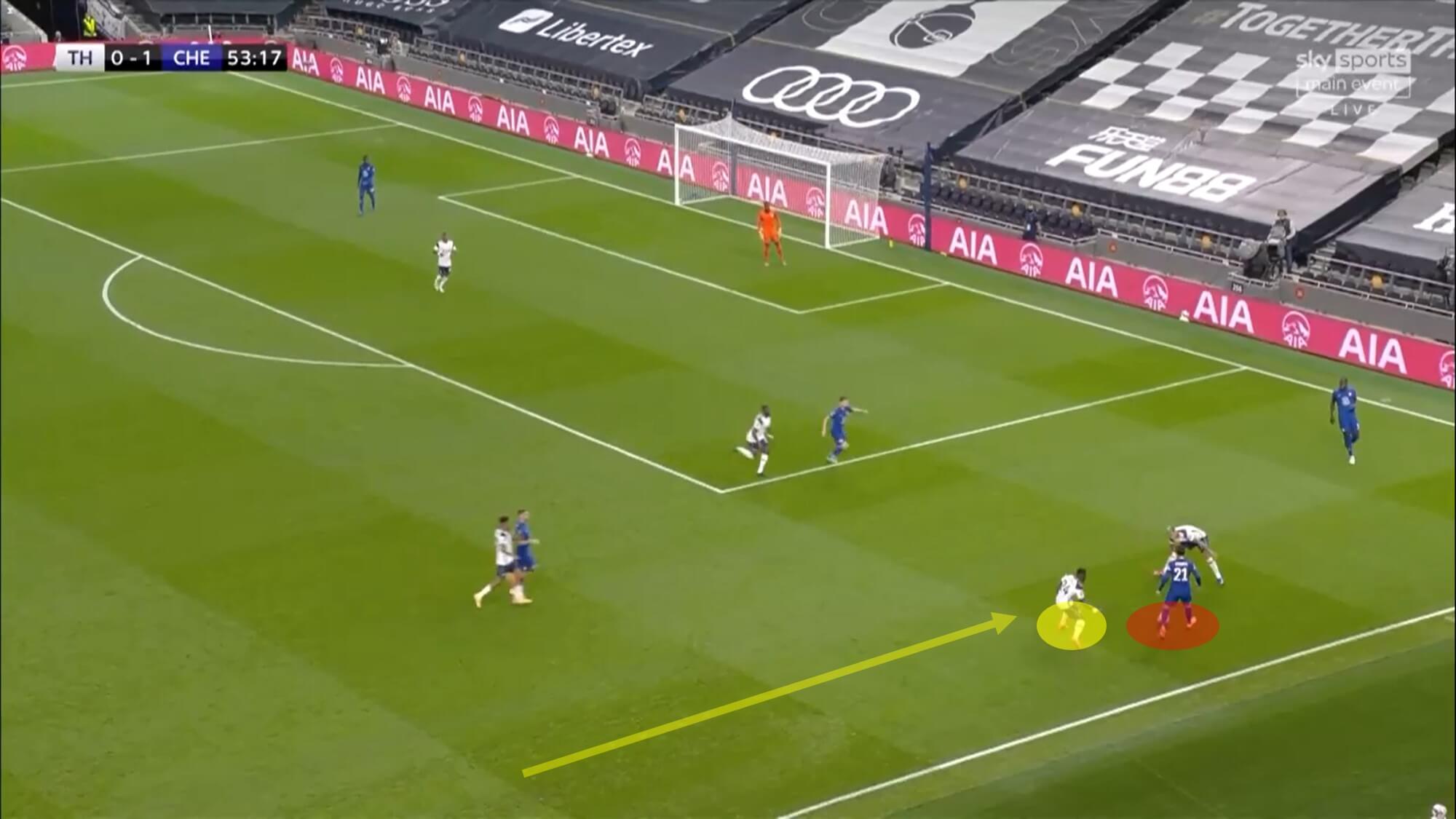 In these areas, you have a higher chance of winning the ball back, as the team in possession have less space to play in due to their proximity to the touchline. The position of Aurier is also key here. As we discussed earlier in the analysis, the two Spurs wing-backs didn’t press the Chelsea full-backs before the break. However, they started to do this in the second half. This forced Chelsea into making errors, meaning that Tottenham were able to win the ball back more frequently.

The visitors didn’t press as aggressively after the break, but when they engaged high up the pitch, Mourinho’s side were more successful in beating the press. In the image below, Eric Dier plays a long ball over the top of Chelsea’s pressing structure. 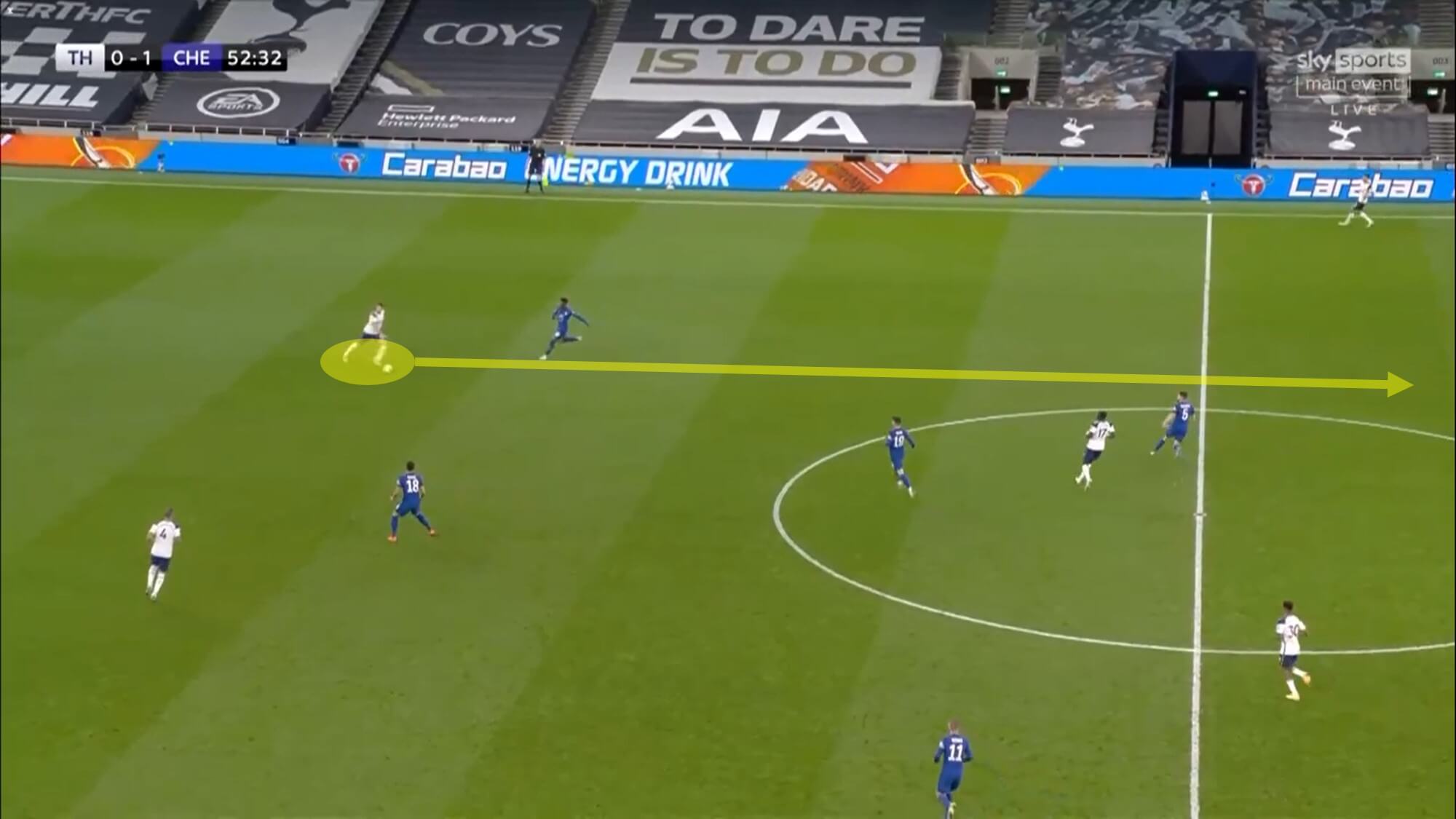 Of course, when a team presses the opponent as a unit in advanced areas of the park, they’re more vulnerable to a long ball over the top because the defensive line moves up to retain vertical compactness. Bergwijn manages to get in behind the Chelsea backline. 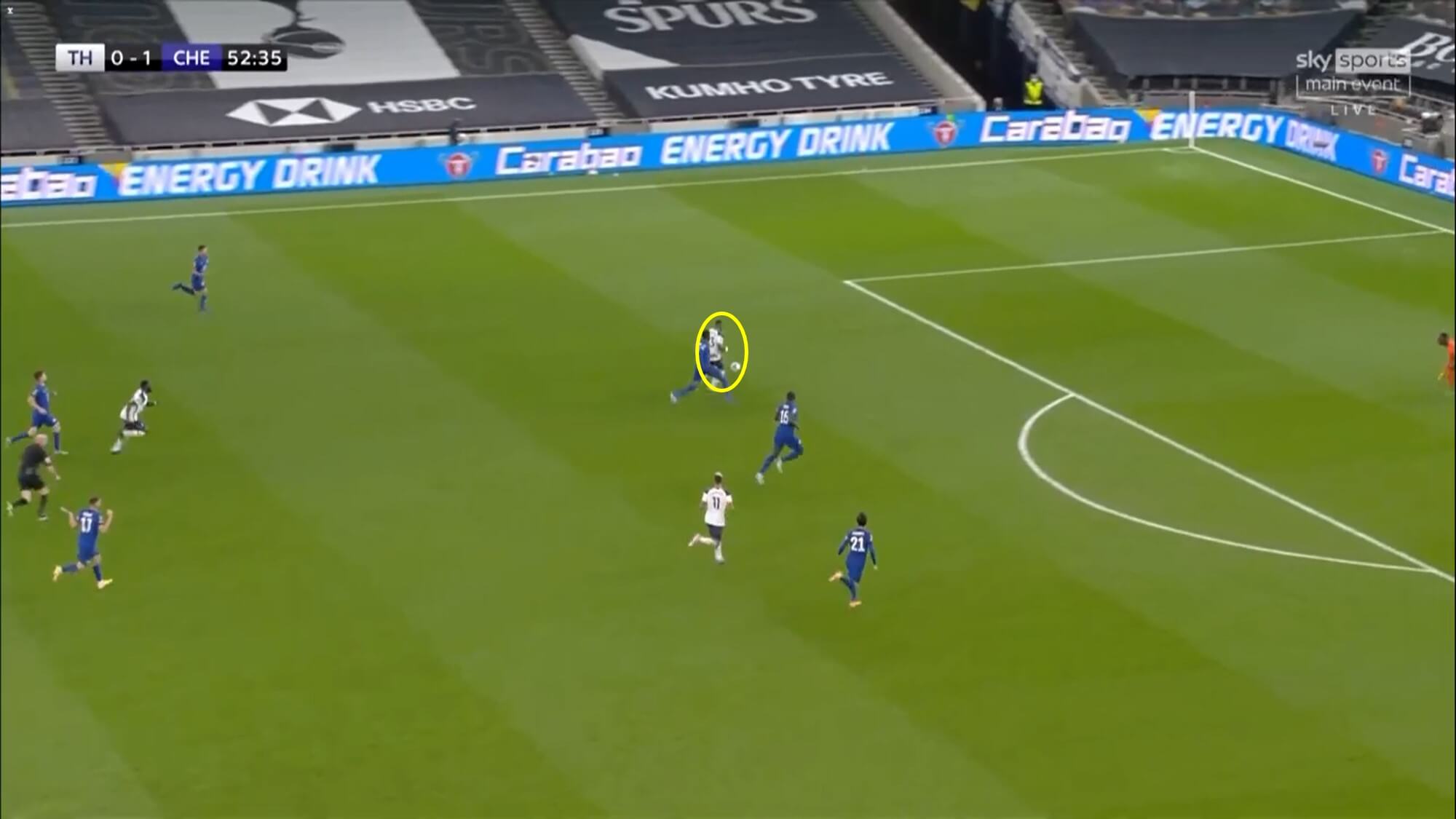 After 70 minutes, Mourinho introduced Harry Kane to the action and Spurs switched to a 4-2-3-1. The change to a back four allowed Spurs to create inside forward and advanced full-back combinations down the flanks. In the image below, substitute left-winger Lucas Moura comes takes up a narrow position. 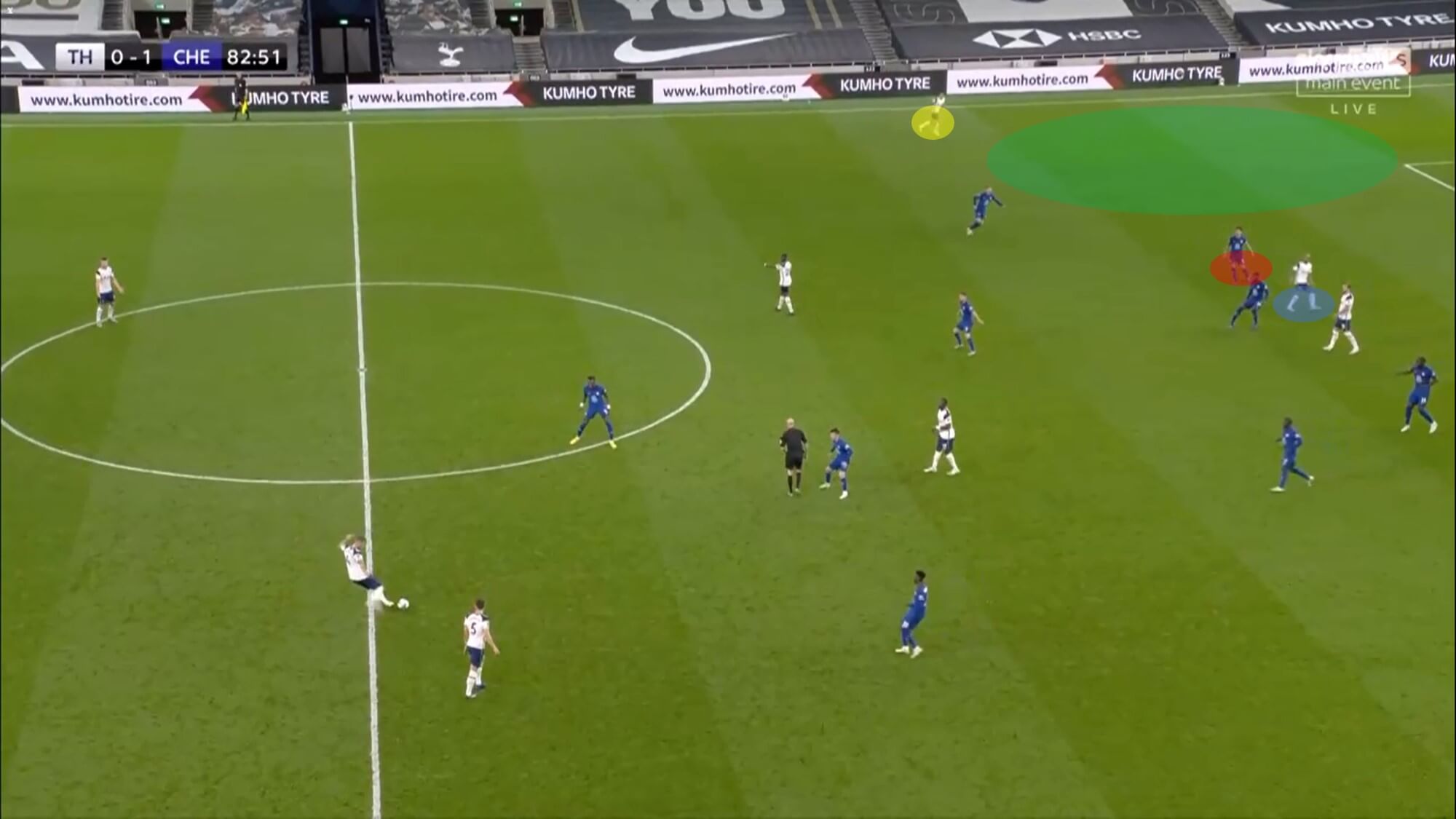 This means that he’s able to get close to striker Harry Kane, so the England skipper isn’t isolated if the ball goes up to him. Also, it creates space for Sergio Reguillon to advance down the outside left channel, because he’s dragged his opposing full-back into inside the pitch. Alderweireld switches the ball out to the new signing, who puts in the cross for the late equaliser.

After a miserable first-half display, it was an ‘all or nothing’ situation for Jose Mourinho’s side: they had to hunt for an equaliser if they were to stay in this season’s Carabao Cup. The second-half performance was hardly a show of champagne football, but it had much more aggression and intensity about it. They got the goal, and then they got the rub of the green in a tense penalty shootout.

Chelsea coasted through the first period, which maybe didn’t help them as they were punished for not getting out of second gear after the break. Neither team emerged from this game with a massive amount of credit, but Spurs will be glad to have gone through whilst conserving their energy in the first half.