This is the first part of a new analysis series where Domagoj Kostanjšak and I will present 1.HNL– Croatian First League. In this data analysis, we will try to give you a closer look at the overall quality of teams playing in 1.HNL based on data and statistics. We will compare players in some metrics as well to try to connect them with team impact.

When 1.HNL reduced the number of teams in the league, the quality of football got better. Each season there is a lot of departments cause Croatia is a pool of talented young players. Last summer we saw 23-year-old ball-winning midfielder Ivan Šunjić move to Championship side Birmingham City from Dinamo Zagreb for eight million euros. Talented left-back Domagoj Bradarić made the transfer to Champions League participants LOSC Lille from Hajduk Split for 6.5 million euros. But we can say the main transfer occurred in winter when Spanish promising midfielder Dani Olmo moved to Bundesliga side RB Leipzig. Croatian youth international Boško Šutalo made a transfer to Serie A sensation Atalanta this winter as well. During this analysis series, we will try to show how teams play and choose one or two players from each team we analyze who could be ready for the next step in their career. 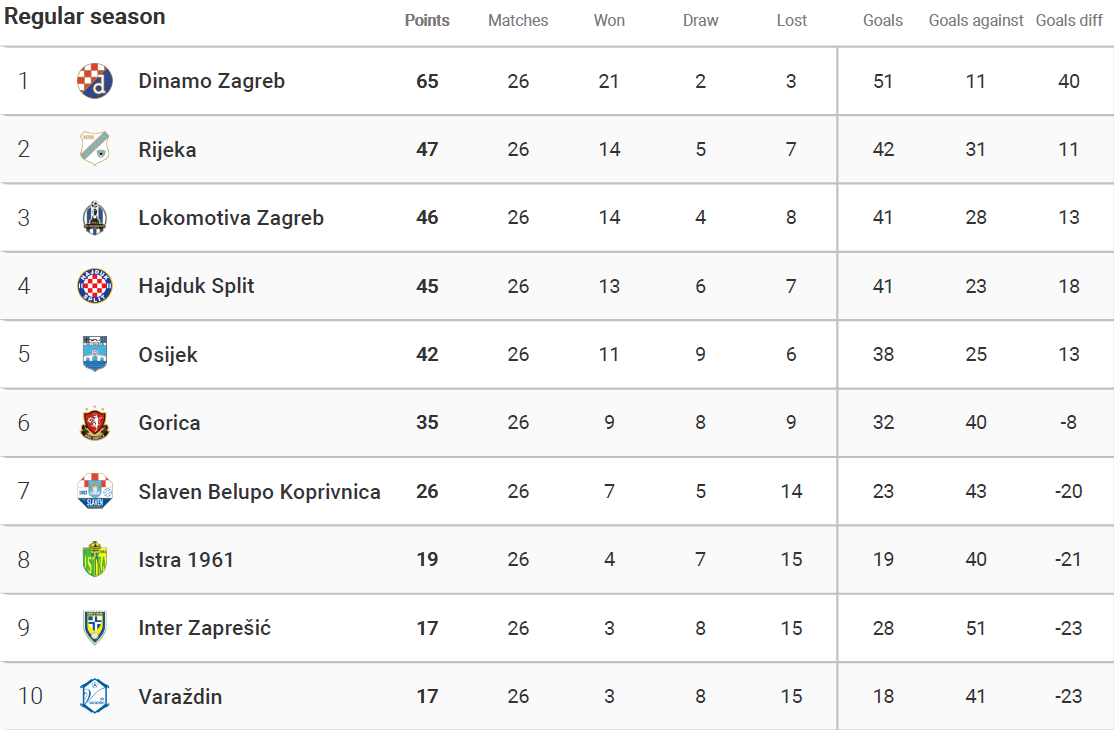 Dinamo Zagreb dominates 1.HNL in the recent years and except them only Rijeka won a title in the last 14 seasons. This season Dinamo is at the top again, the league will be continued in June, even if we know the winner there is still battle for European competitions. 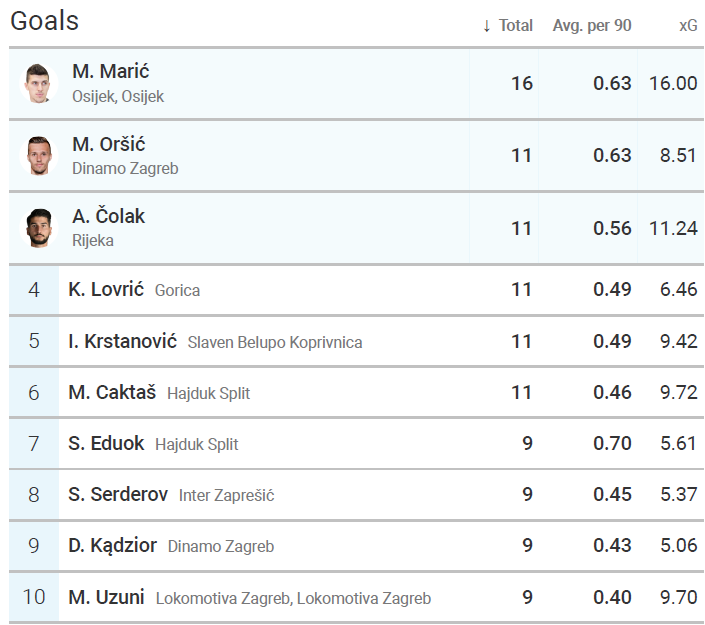 Like we know that Dinamo will be champion, it is a similar feeling that Osijek striker Mirko Marić will be league top goalscorer. Marić was one goal behind top goalscorer Caktaš last season, but this season showed fantastic execution scoring exactly what was his xG value(16). A player who overperforms his xG value a lot is Kristijan Lovrić. Gorica left-winger is ready for bigger league, reason why he has low xG value cause he shoots from every position he can. Scored some fantastic long shots and free-kicks this season. Lovrić and Marić will be covered in our scout reports in the next few weeks. 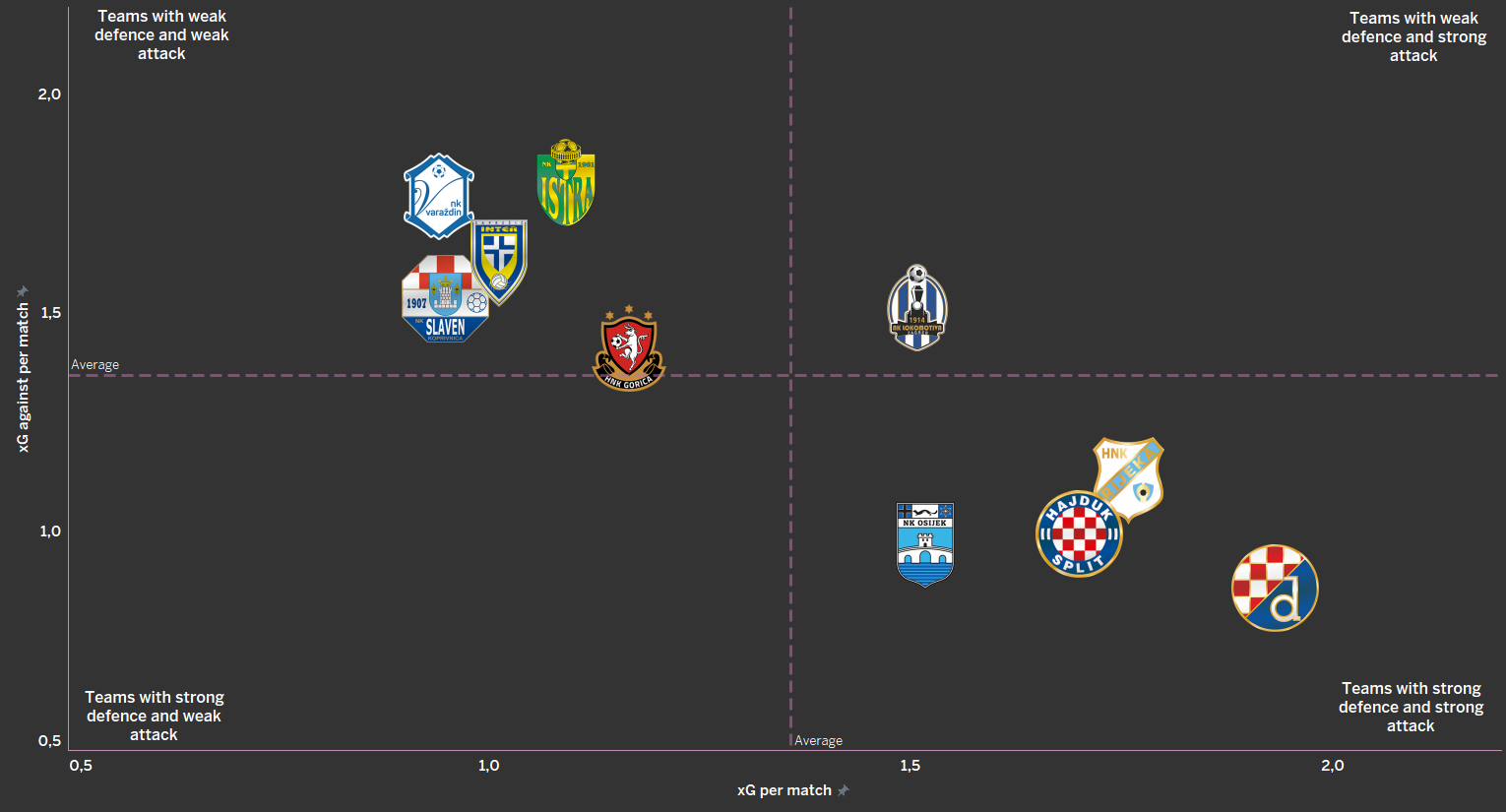 The image above shows how teams look in terms of expected goals for and against. Top five teams are having xG for between 1.5 and 2 per match with Dinamo leading the way. Only Lokomotiva from top five teams is closer to the bottom half of the table if we compare xG against per match.

In this section, we will see how clubs look in the attacking phase. First, we will compare teams based on the number of shots and the average shot distance. 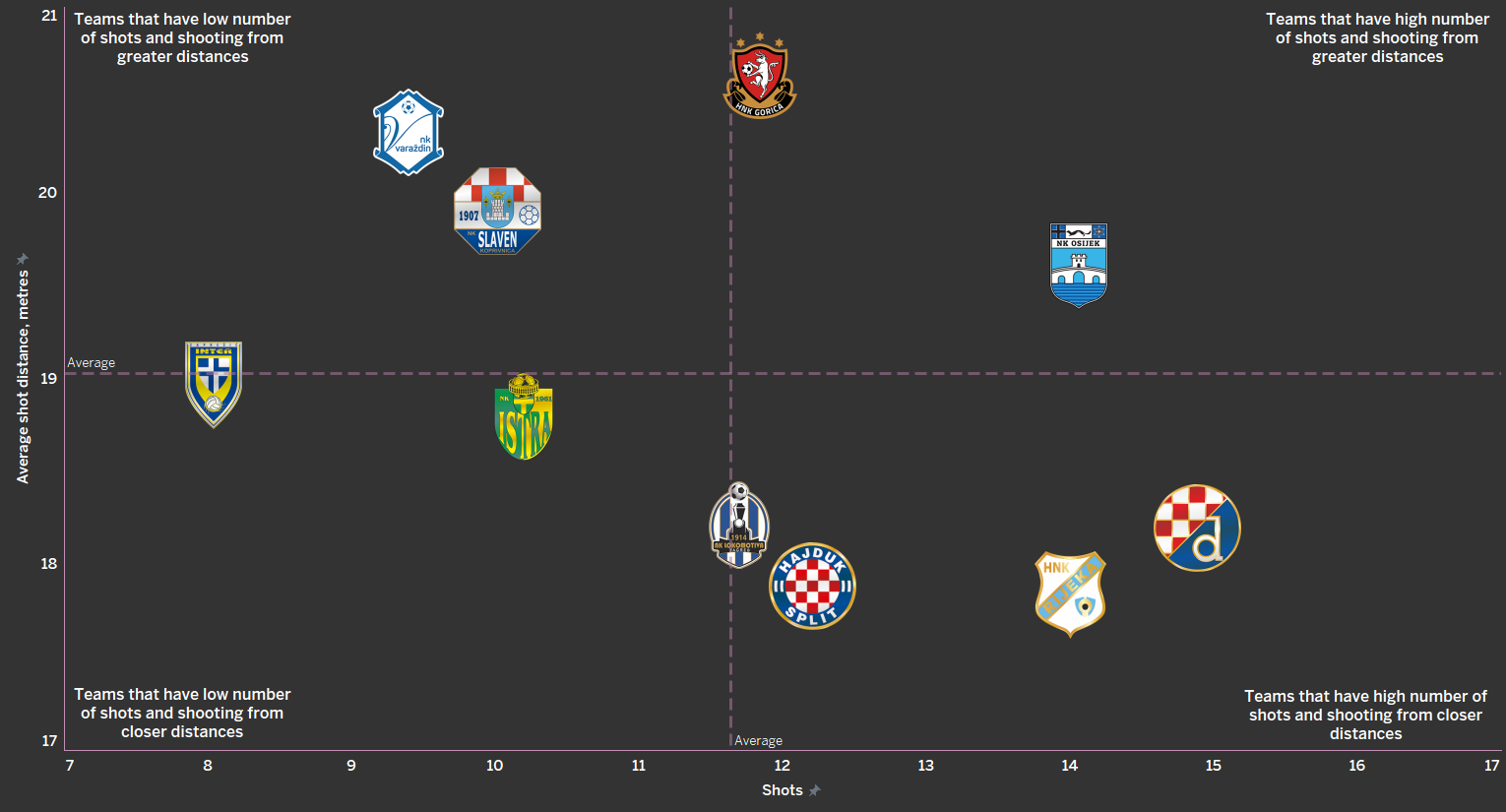 As we can see on the graph above, Dinamo shoots the most in the league with Osijek and Rijeka behind them. Rijeka and Hajduk shoot from closer range than other clubs. Gorica takes most long-range shots and the next graph will show us why. 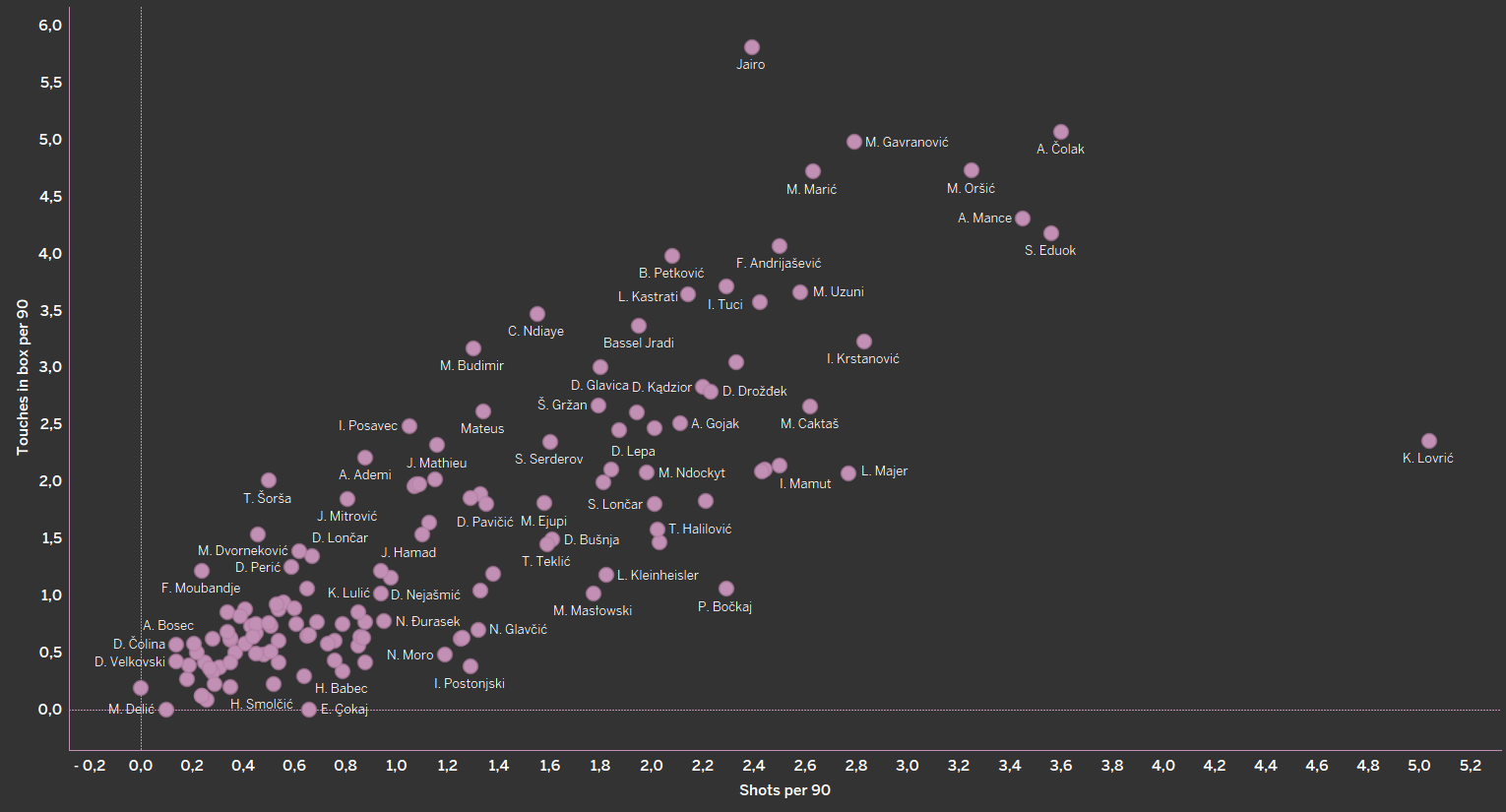 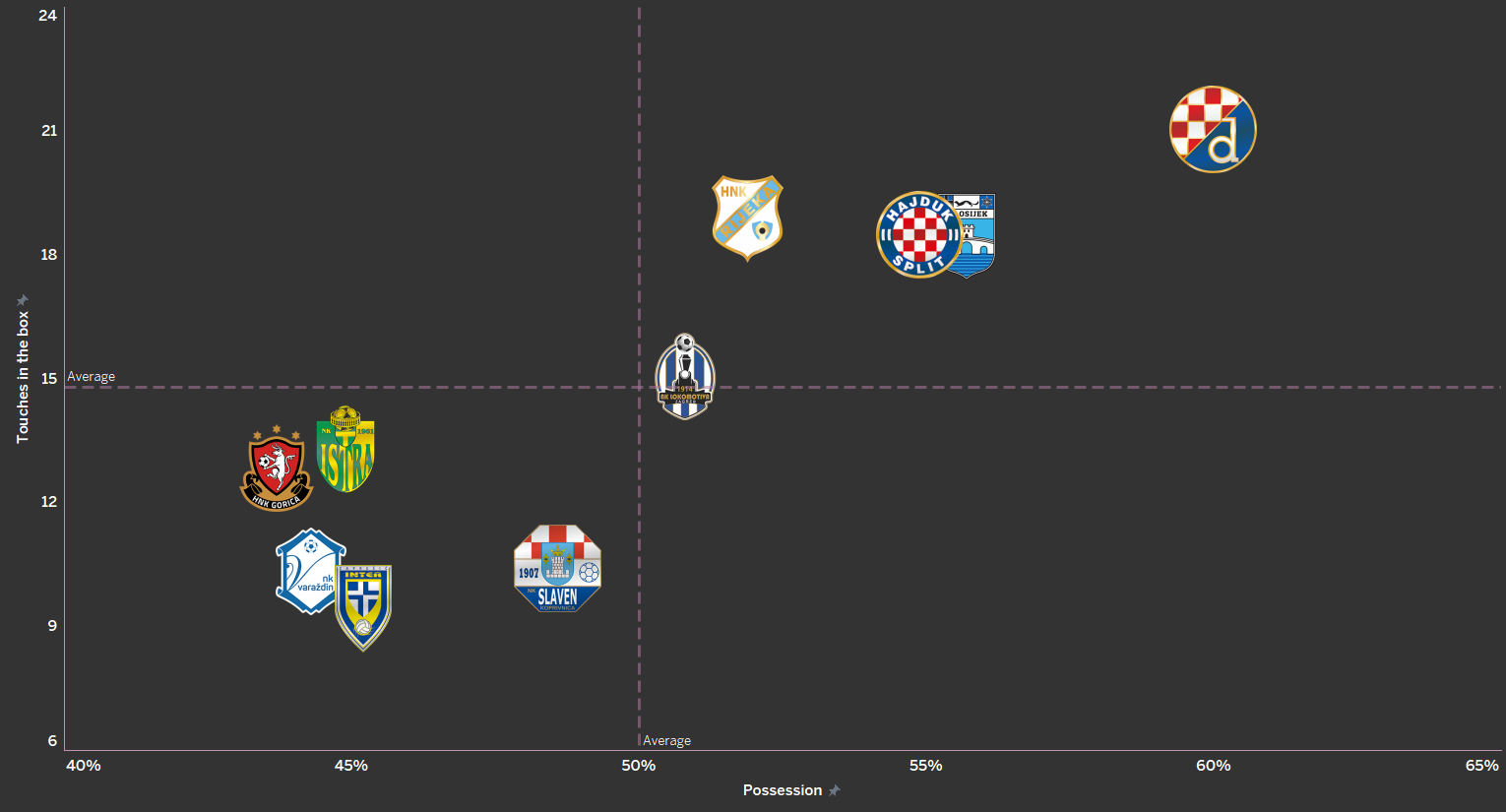 Dinamo again is clearly at the top of both metrics. They are the only team with 60% ball possession and the only team who has more than 20 touches in the box per match. Next followers are those teams who are fighting for European competitions spots. Varaždin and Inter Zaprešić are really bad in both metrics which is represented on the league table as well. Next graph will see often teams attempt long or lateral passes, to evaluate which teams are playing direct football and which teams tend to play positional more patient football. 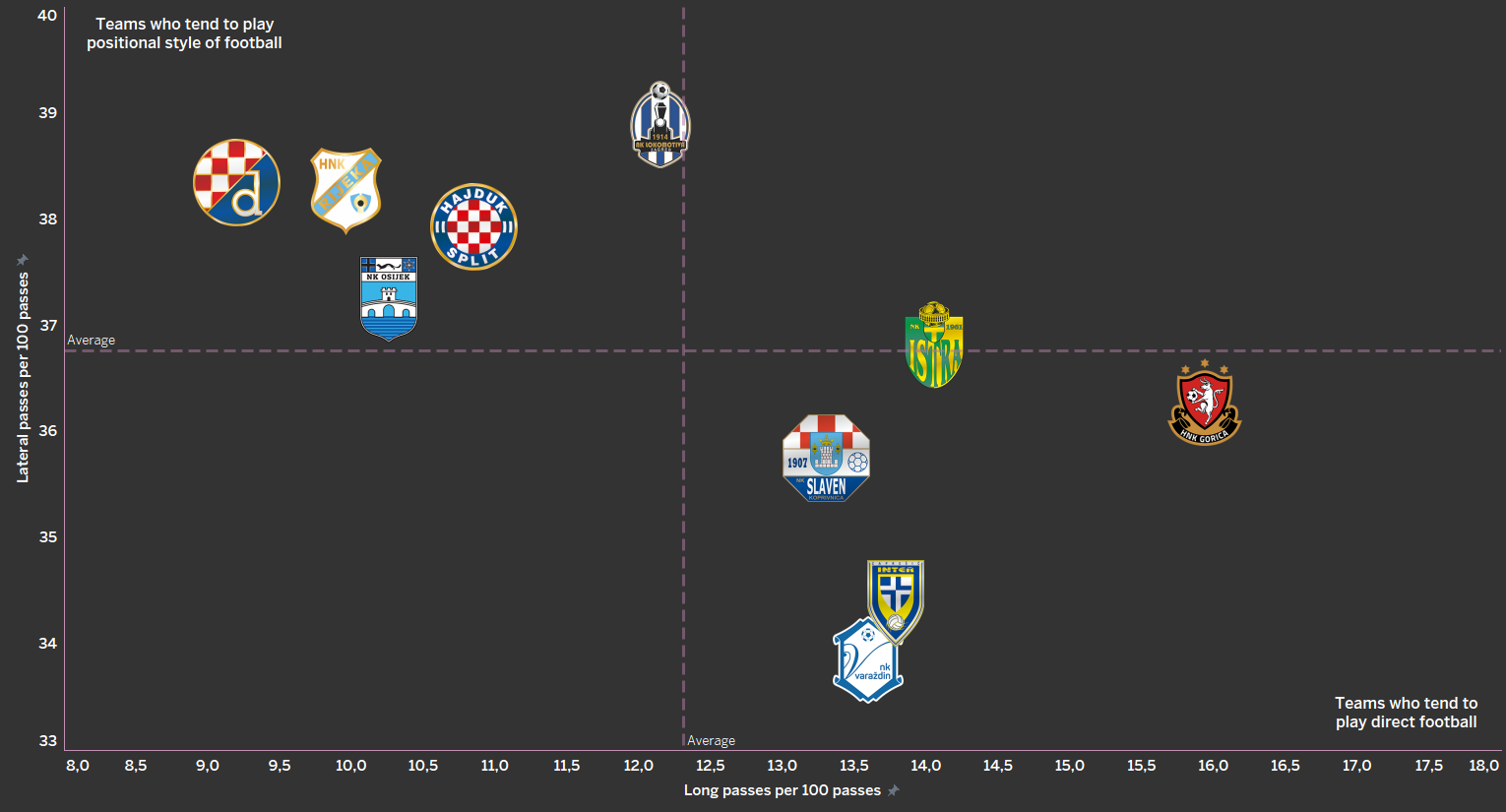 Again we have two clusters top half of the table and bottom half of the table. Those teams who tend to play more positional and have more possession are top-half teams.  Bottom half teams play more direct football. Gorica is the most direct team and they attempted a lot of long passes under their ex-coach Jakirović, now with a new coach they will try to play more possession-based football. Now we want to see how good are players in progressive passes and passes into the final third. 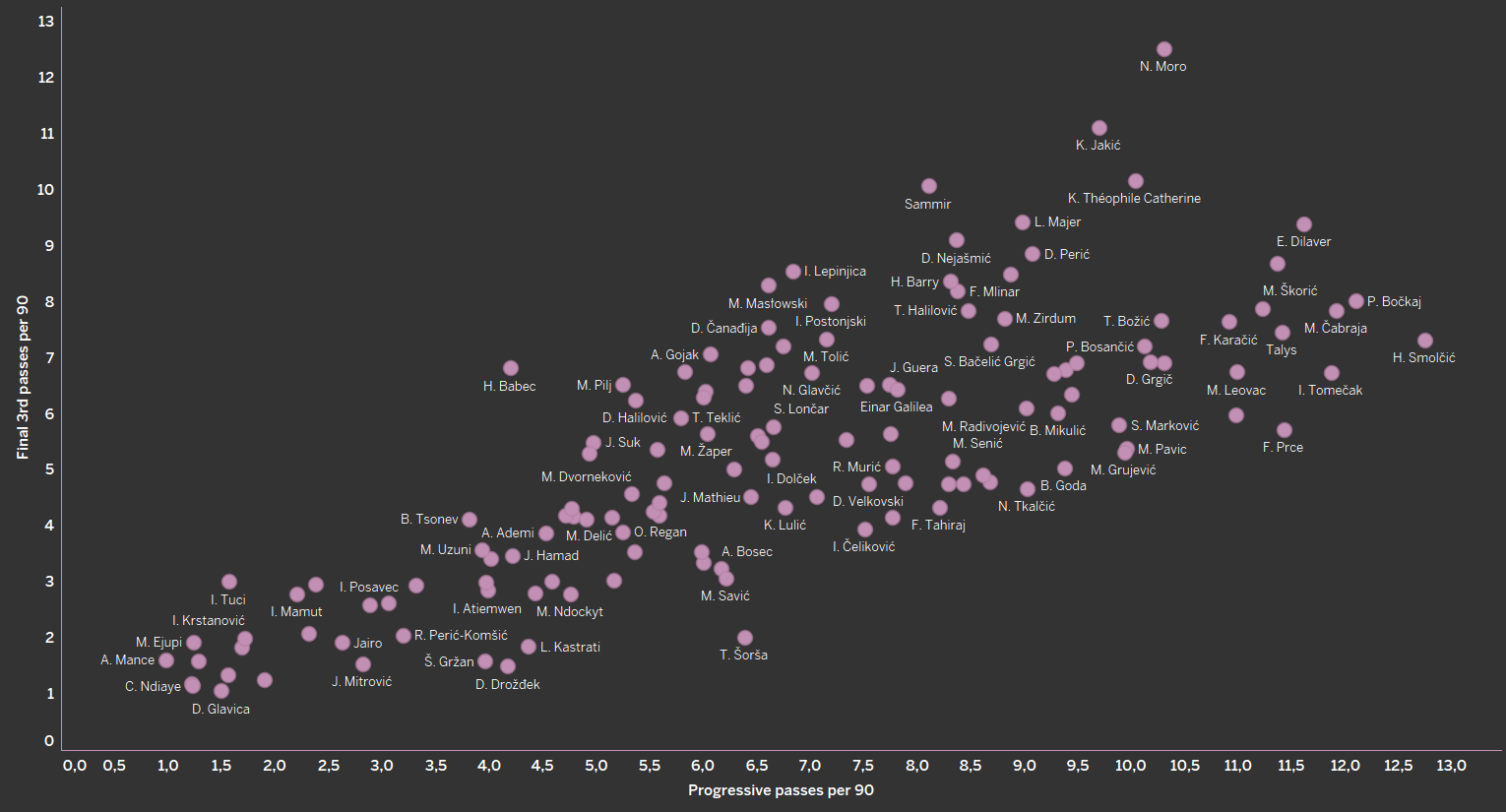 Best in progressive passing is Rijeka centre-back Smolčić with 12.75 progressive passes per 90. Petar Bočkaj from Osijek is second-best progressive passer. Talented midfielder Nikola Moro is averaging most passes into the final third with 12.51 of those passes. Moro recovered from knee surgery and he is playing great season replacing Šunjić who we mentioned earlier. Second-best in terms of passes into the final third is Kristijan Jakić who is having a breakout season in Lokomotiva. The last thing we will evaluate in this section is creativity in advanced areas of the field. The graph below will compare players based on their deep completions and xA. 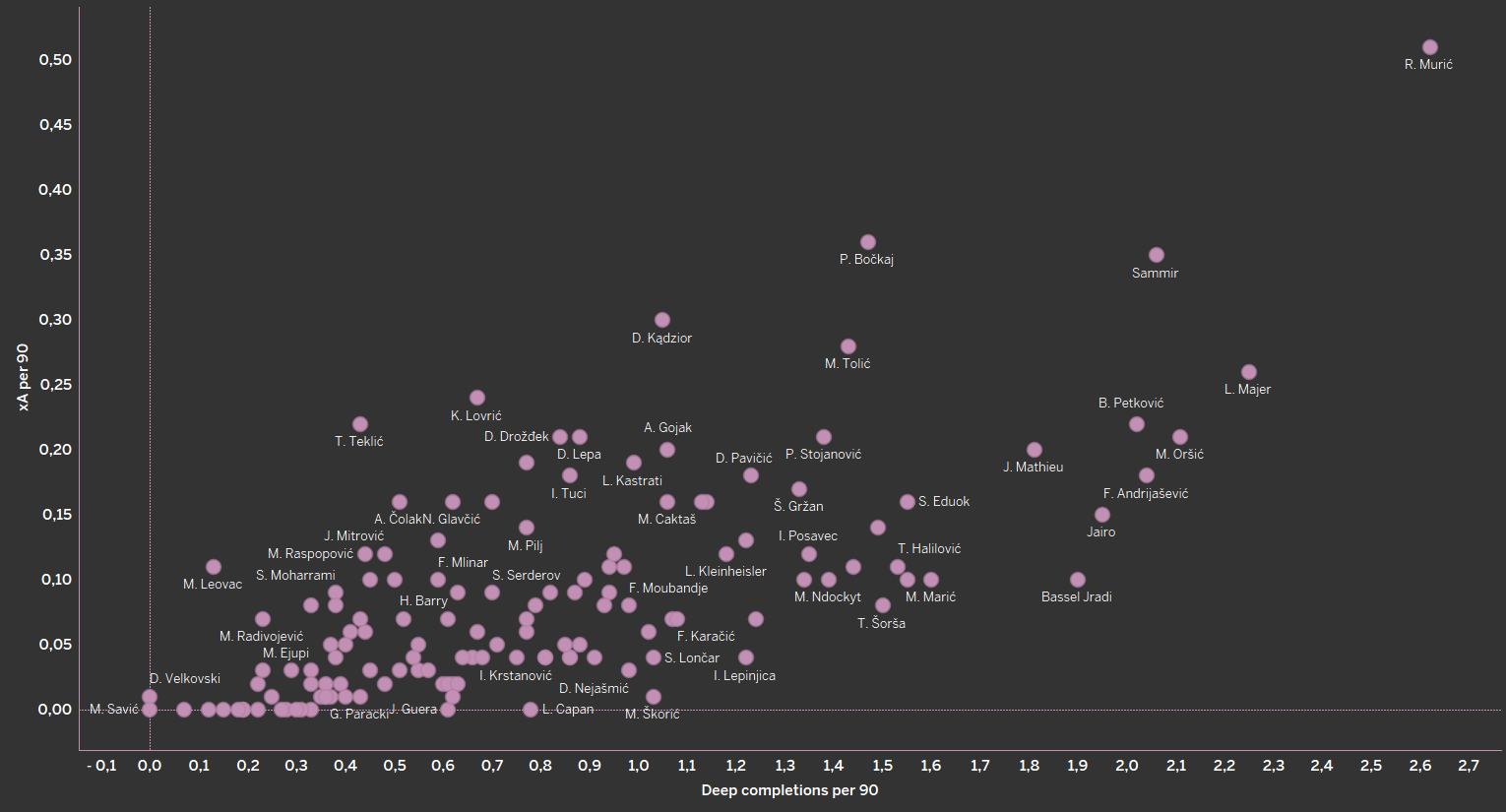 Impressive numbers by Robert Murić, he is averaging 0.51 expected assists per 90 and 2.62 deep completions per 90. Murić made move from Dinamo to Ajax aged 18, but never got a real chance at Ajax, Pescara and Braga. On last season winter break he came back to Croatia which revived his career.

This section will be based on defensive statistics of teams and players. PPDA is a fantastic metric to see how hard the team works to get the ball back. We will show the relation of average shot distance by opponent and PPDA on the graph below. 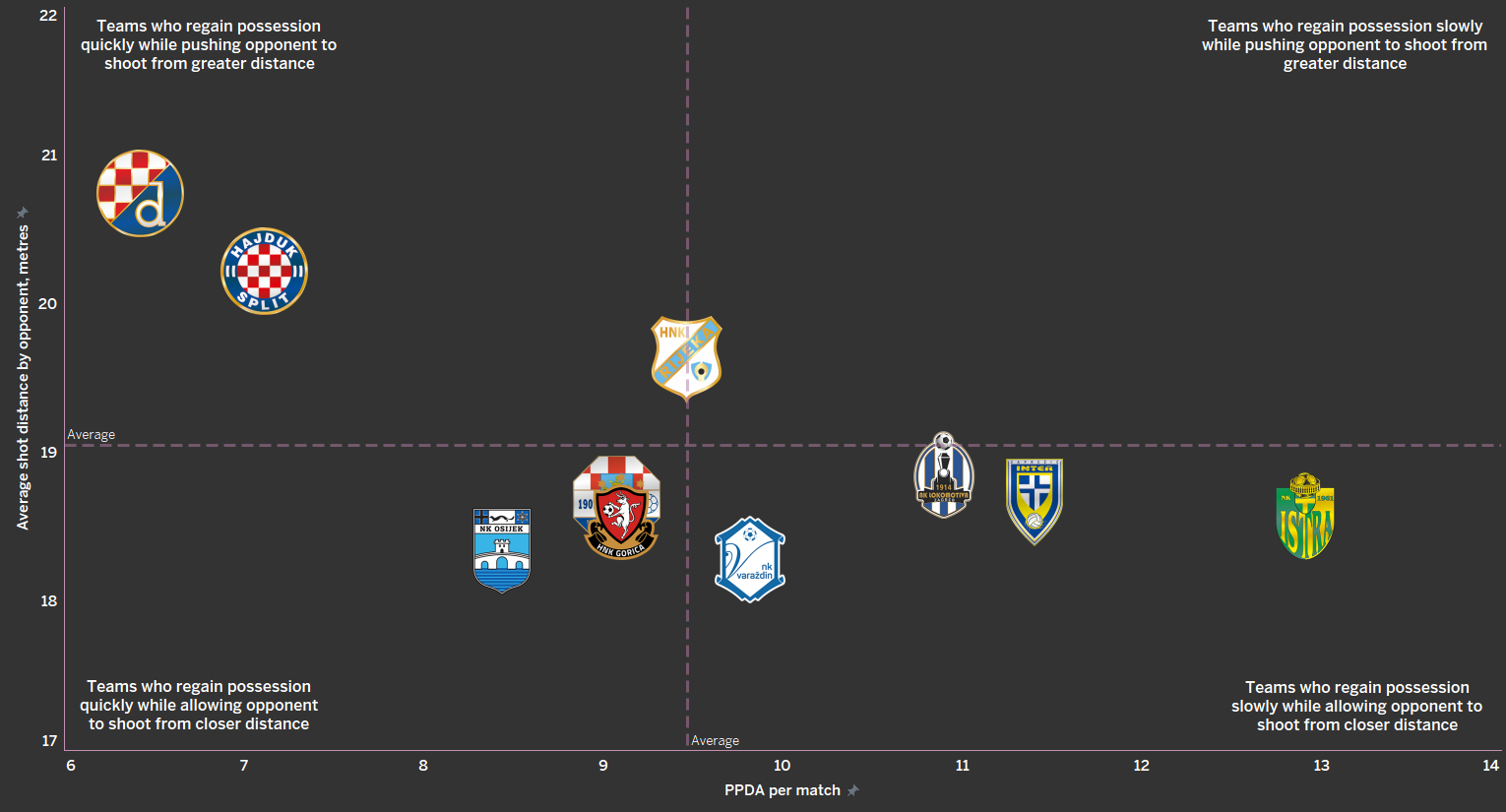 We can see that biggest rivals Dinamo and Hajduk are pushing opponents to shoot from greater distances while trying to get the ball back as fast as possible. Osijek looks good in terms of PPDA, but only worst team in the league Varaždin allows their opponents to shoot from a closer distance than them. Istra allows their opponents most passes when they are in the defensive phase of play. We will now take a look into players defensive impact. The graph below will compare players with successful defensive actions and possession adjusted interceptions. 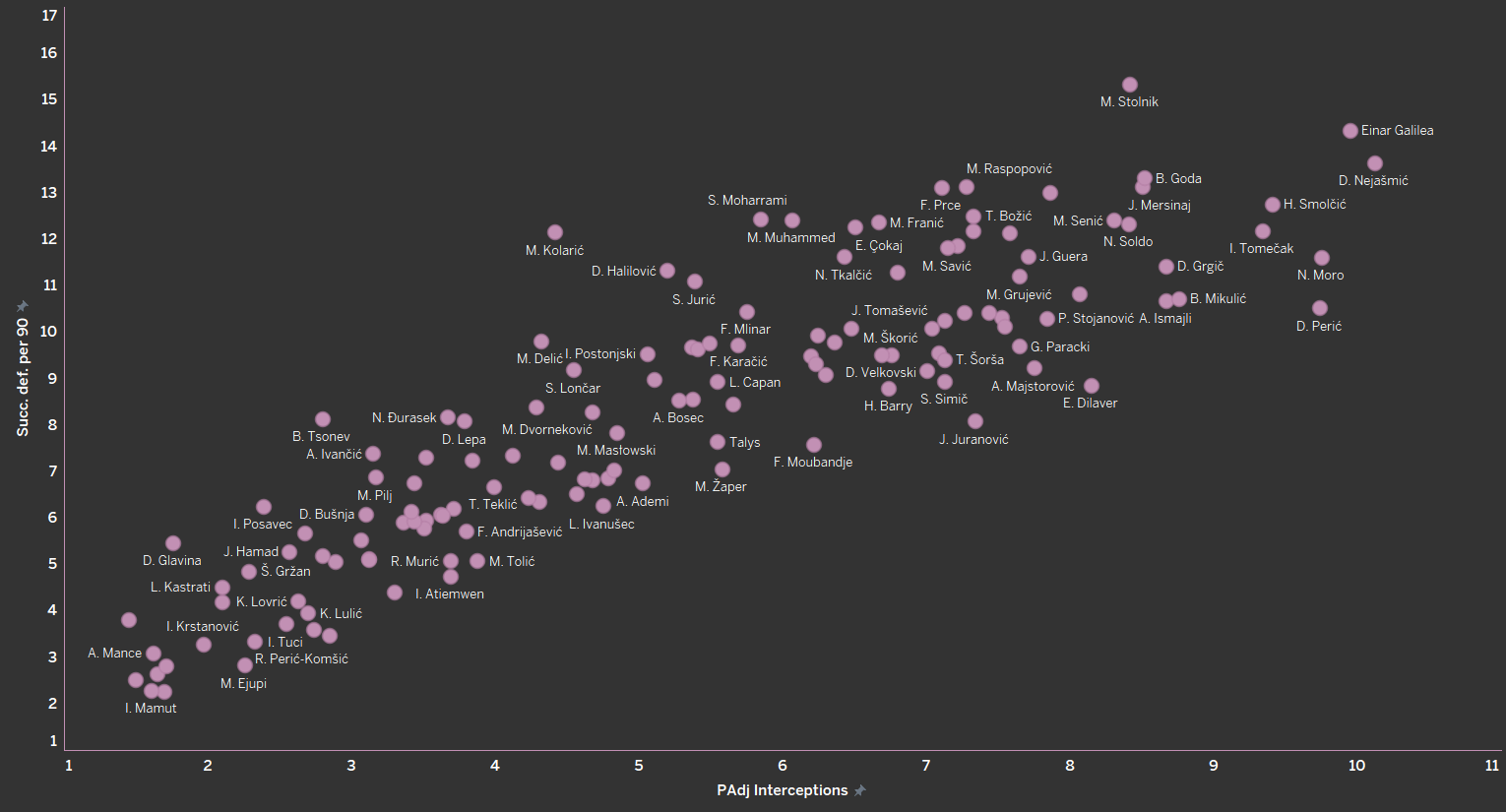 We can see that Stolnik from Varaždin is having league-high successful defensive actions per 90 with 15.33, which is connected a lot with Varaždin defending most of the time. But even with them defending most of the time we can’t disregard his defending output cause he averages 8.42 PADj interceptions as well. Istra and Hajduk holding midfielders Einar Galinea and Darko Nejašmić are the best in terms of these two statistics. What could provide us with even more insight on how teams tend to get the ball is their recoveries locations. The graph below will show us recoveries percentage teams have in their own third and final third. 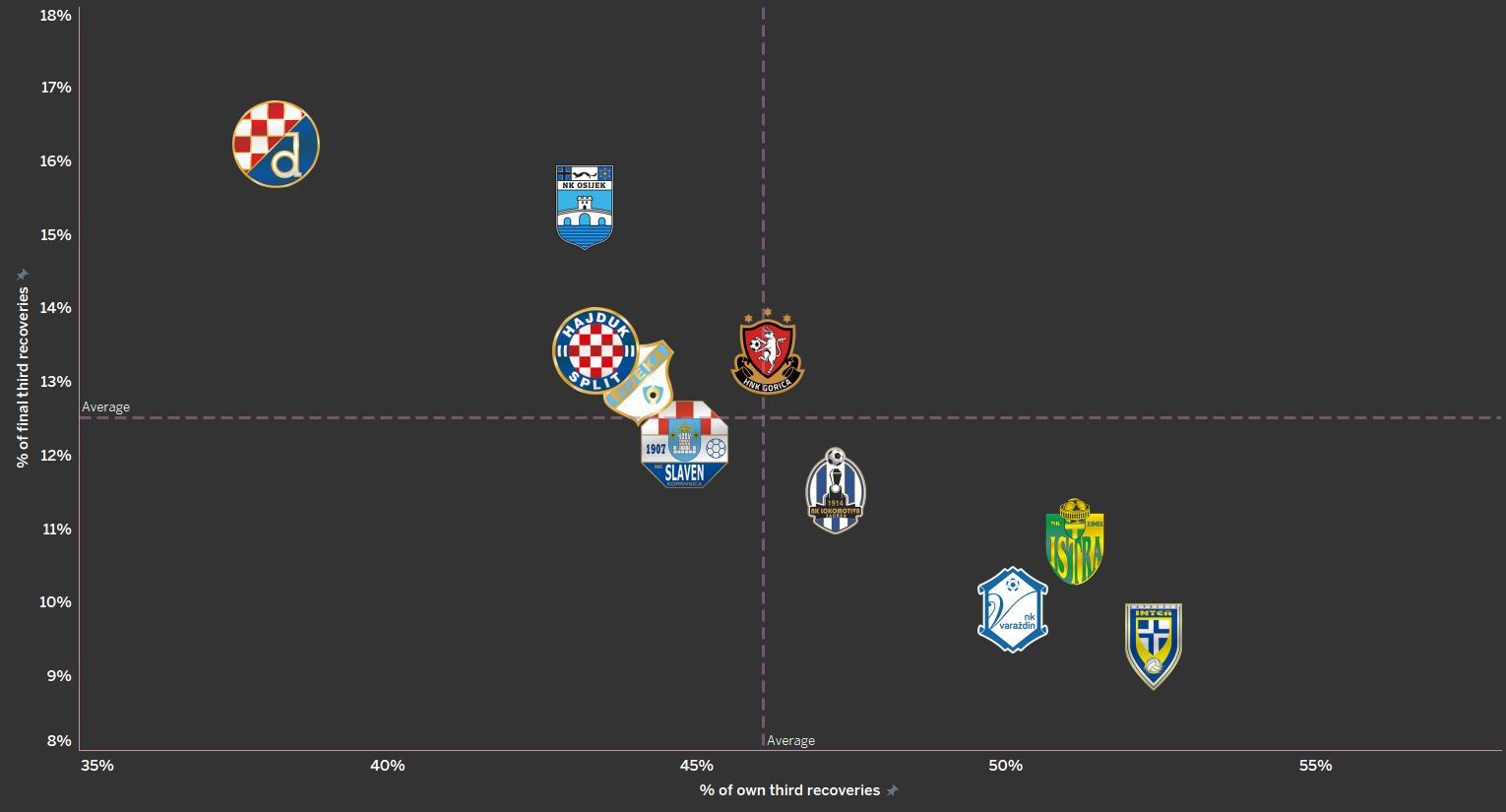 Dinamo and Osijek are best in the league in recovering in the final third. Varaždin, Inter and Istra recover the largest number of balls in their own third and smallest in the final third which indicates their defensive style of play due to lower quality squads.

This part showed us how teams and players look compared to each other. Dinamo is clearly dominant because they have a higher budget and more quality squad than the rest of the teams. What is really interesting is that looking on most team graphs it seems that everybody is on position they deserve, maybe Lokomotiva who could be below Hajduk and Osijek, but they played really good in the second part of the season winning 6 out of 7 games which explains the third position on the table. Next analysis comes soon and it will be about Rijeka, so stay tuned. 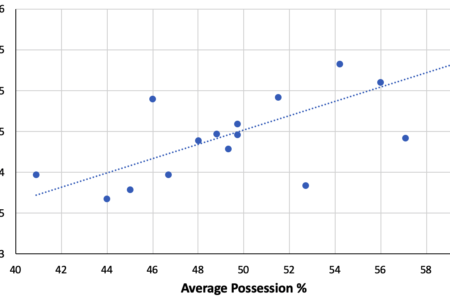 Corner kicks are a vital part of football. Whilst the corner kick is sometimes misconceived due to an overinflated perception […] 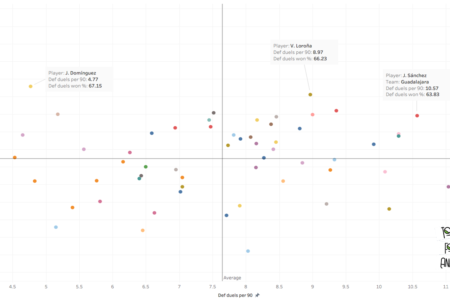 Not too long ago, the role of a full-back was probably seen as one of the least important in football. […] 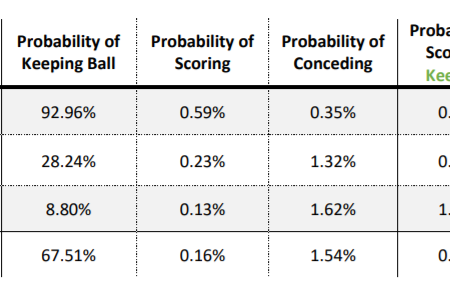 How to Beat the Barcelona of Old: Is It Worth Passing Out the Back? – data analysis

Should bad teams playing good teams take risks in pursuit of a win, or play it safe and hope for […]